When enthusiasm and dedication come together, true magic can happen

Time with any racing car tends to be fraught.

Fraught in terms of the track window, of ensuring that all the temperatures are optimal, that you’re comfortable both physically in the car and mentally with its myriad operating systems. The variables are almost endlessly… variable.

Yet we’ve added a few more today, and they’re big. As the man from Michelotto, the specialist that’s prepared and run Ferrari GT race cars since 1969, adjusts the belts on a seat designed for someone more snake-hipped than me, the Monza pit-lane beckons. 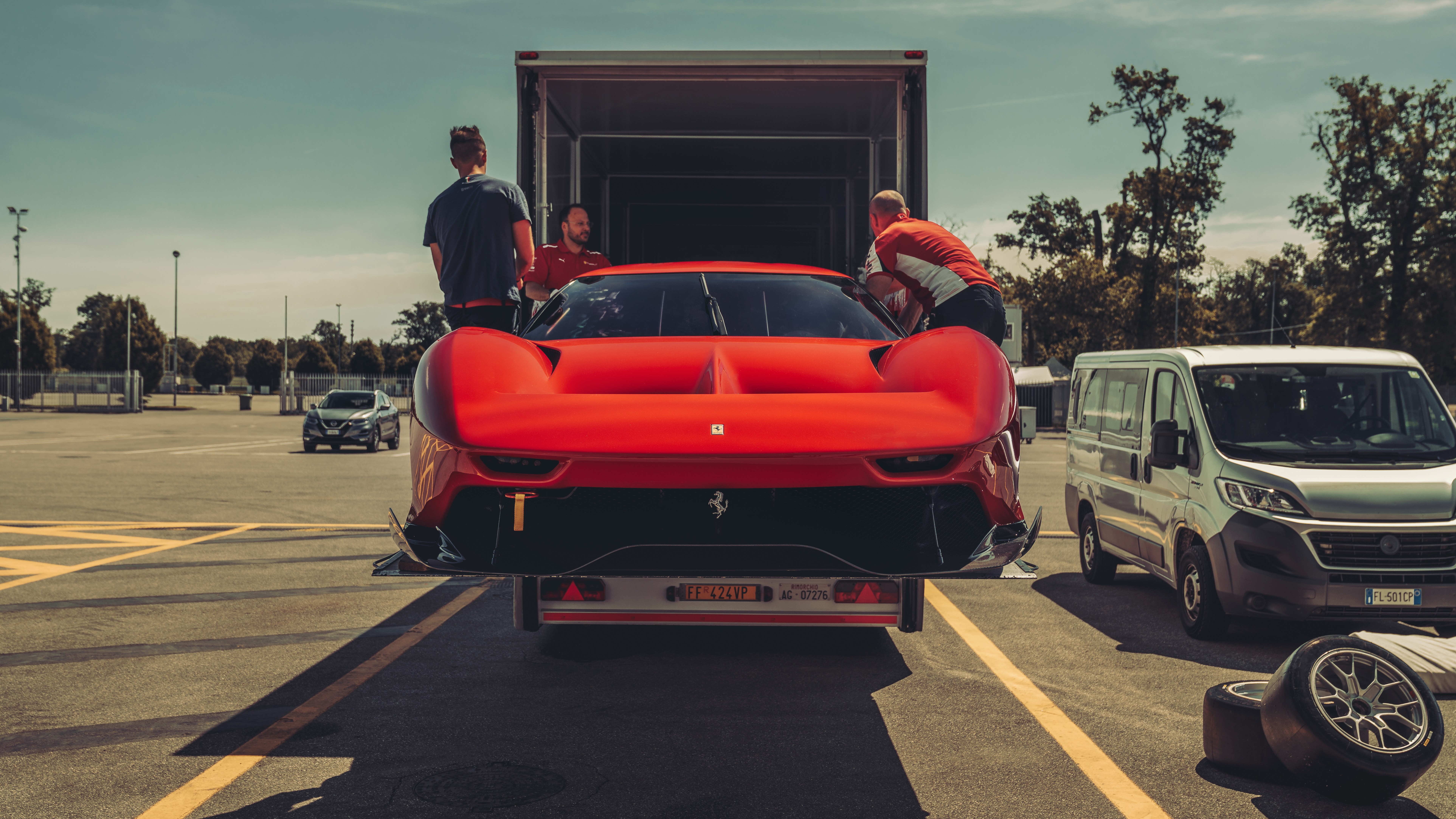 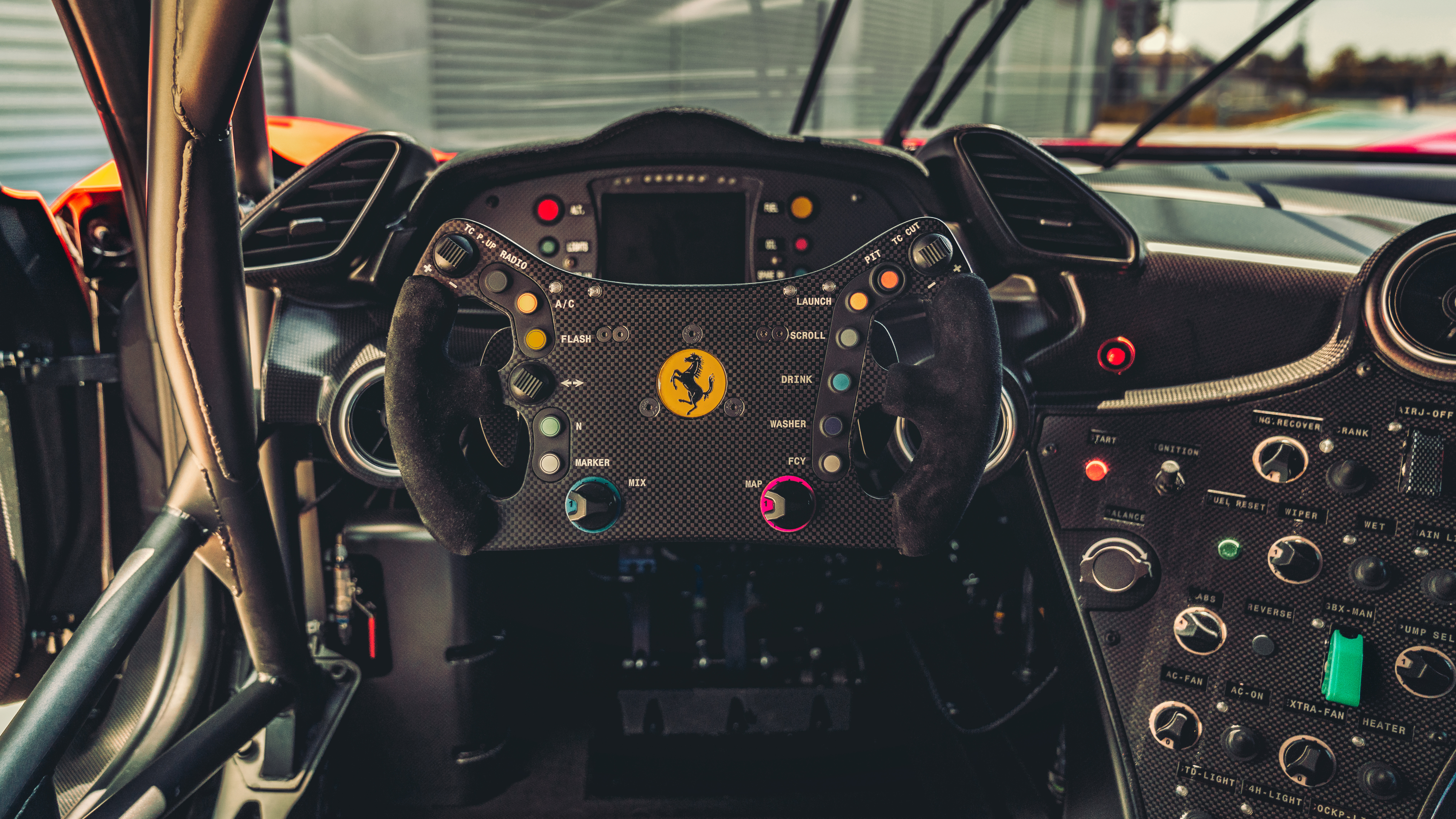 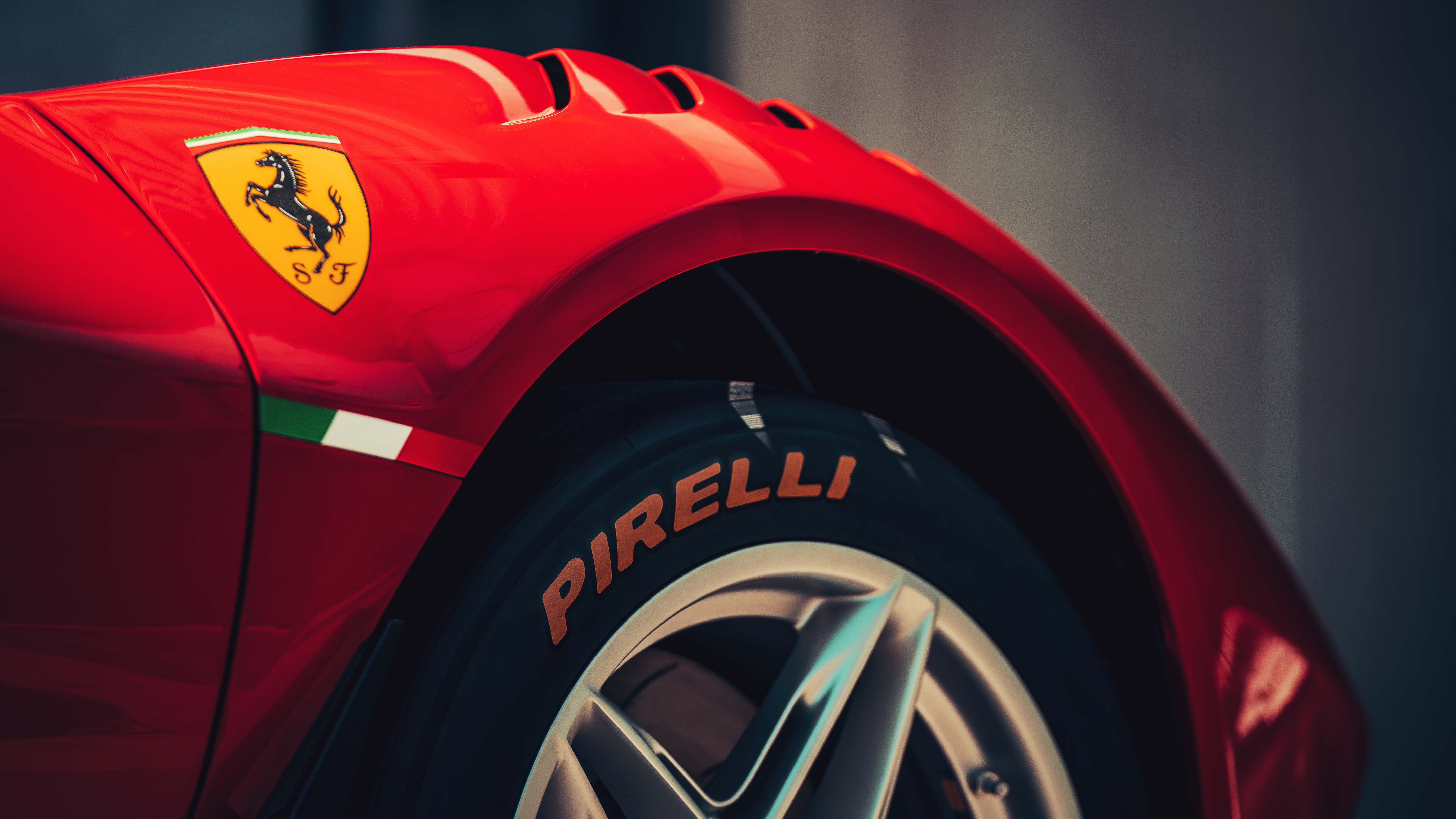 Monza. The heartbeat of Italian motorsport. Home to some of the most romantically oil-flecked dudes ever to climb into a racing car. Stomping ground of the tifosi. Ahead lies one of F1’s most notorious chicanes, the Variante del Rettifilo, which flows into the breathtaking curva grande, and then the Curve di Lesmo… This place is hugely fast and hugely historic. On a warm day, the light has a liquid quality and strafes the trees in poetic shards.

So we have the location. We also have the car, the Ferrari P80/C. The what? It has fabulous front wings, prominent rear buttresses, a visor cockpit and enough aero to retard a rocket. But it’s also as enigmatic as the guy who commissioned it, a true flight of fantasy, one of one, with a price to match (circa £5m). It’s based on the 488 GT3 racer, so it comes with a ‘take-no-prisoners’ default setting and Pirelli slicks. The paint finish is called Rosso Vero – true red – and has a ceramic finish that requires above-average valeting skills.

P80/C might not be wearing the SP nomenclature that denotes it as the latest from Ferrari’s Special Projects division, but that’s what it is. This is the skunkworks that sits at the summit of Ferrari’s product hierarchy, and invites top clients to create their own cars. According to ex-Ferrari CEO Amedeo Felisa, SP clients “effectively embody the marque, and [go] beyond just being a collector”.

This is an elite club. There have been approximately 40 since Ferrari activated the programme in 2008, from Japanese Ferrarista Junichiro Hiramatsu’s SP1 – a restrained ode to Pininfarina design great Leonardo Fioravanti – via Eric Clapton’s SP12 EC BB 512 homage, to last year’s SP38 ‘Deborah’. These are highly personal expressions, on which basis some are, let’s just say, more convincing than others. 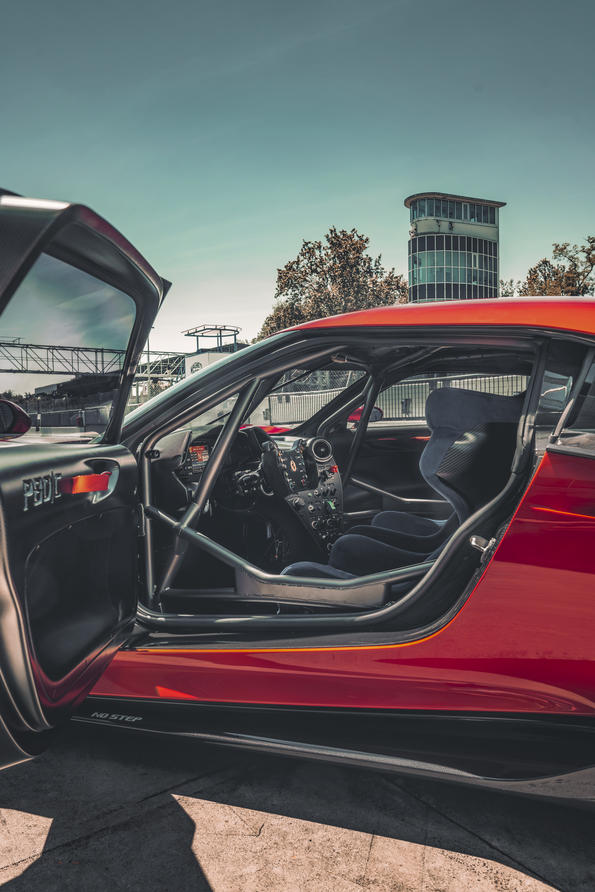 Then there’s the P80/C. This isn’t just the best SP car, this is one of the best cars to emerge from Maranello in aeons – and that’s saying something, given Ferrari’s 21st-century run of form. Its owner is Hong Kong-based publishing entrepreneur TK Mak, who’s also CEO of Blackbird Automotive. He’s a new breed of Ferrari owner – younger, hipper and more innately fashionable than the established adherents – something Ferrari is keen to cultivate as the car world shifts on its axis.

TK is no arriviste, though: he knows more about Ferrari and its history than almost anyone. The P80/C is remorselessly now, but also a love letter to Ferrari’s beloved endurance racers, in particular the 330 P3/4 that saw the company avenge its drubbing at the hands of Ford’s GT40 at Le Mans by winning the 1967 Daytona 24 hours.

“Like many Ferraristi, I’ve been enamoured of the ‘Sports Prototipi’ of the Sixties and Seventies since I was a child,” he tells me. “A time of trial and error, a world without computer-assisted design, where engineers would travel the lengths of their imagination and experience to try and claim those milliseconds, driven by a sink-or-swim mentality, and when races were sometimes won on grit alone.

“To survive, you had to win – and the result was some of the most beautiful racing cars ever made, even to this day. For P80/C, the goal from the get-go was to recreate the feeling of that era – of aesthetics meeting engineering, of equal parts beauty and performance. I wanted to use this as a way of projecting my vision for a future GT Prototipi – my interpretation of a future design language for Ferrari, a brand that lies very close to my heart.”

TK’s team is making a film about the car, and it’s enjoying something of a world tour. The first stop is Monza. A couple of Ferrari GT drivers have shaken it down during its development and another, Maurizio Mediani, is here today. In total, maybe three people have driven it – not including its owner. Now me. Kid gloves have replaced the racing variety.

Such are the complexities of GT racing that the 488 GT3 is less powerful than its road-going sibling, and runs approximately 600bhp according to the series’ ‘BOP’ – balance of performance – regulations. This drives Maranello’s top people crazy and seems retrogressive, to say the least, but it levels the playing field.

Ferrari has race-proved hundreds of these cars in various global championships, and they’re robust and usefully fuel-efficient. The engine is the 3.9-litre, twin-turbo V8, with modified, lightweight internals and an Inconel exhaust, but as the race-spec engine is only running 0.7bar of boost there’s way more potential.

Which is where today’s assignment gets slightly political: the P80/C is running a more aggressive engine map, but no one will confirm how much more aggressive. There’s talk of 800bhp, though, and on the simulator it’s apparently doing some eye-popping times round Fiorano. In the midst of the conjecture, all I can think is: one-off, slick tyres, high-speed track, nothing to prove, bring it back in one piece...

It fires up with an extended push on a surprisingly small starter button, and settles into an even, unexpectedly high-pitched idle. The digital display ahead of me monitors the vital signs with hyperactive intensity. The central console is a single wodge of carbon fibre totally unrelated to the road car, though a big vent and aircon issues a welcome blast of cool air. Nor is the wheel even a full wheel; its alien form should feel odd and it’s festooned in buttons, but of course it’s brilliant to hold. Racecar. Among others, there are dials for fuel mode and engine map, and the switches to adjust traction control are top left and right. We won’t be troubling them today, although no amount of fast-acting algorithms can help yaw on stone-cold slicks.

The transmission is the ubiquitous six-speed unit from Xtrac. Engage first and release the weighty clutch pedal for an easy getaway. The car is instantly straining its muscle and sinew like a newly enraged Bruce Banner, but it’s also amazingly well-mannered. We have images to get, so I use the time stuck behind the intrepid Richard Pardon to familiarise myself with both car and track. 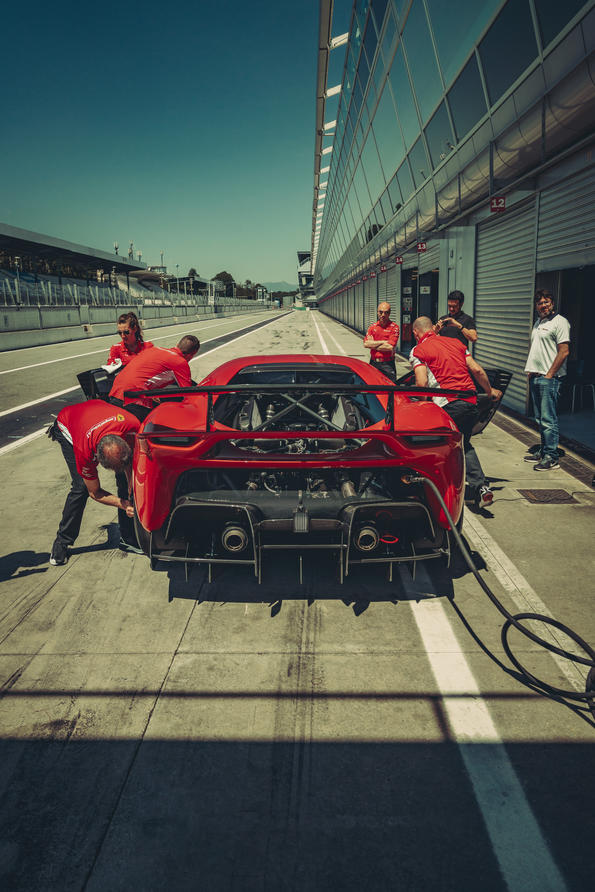 God, Monza is good. No wonder F1 guys all rave about it. Sure, it’s not particularly technical and doesn’t have the banzai elements of Spa or Suzuka, but it’s still massively rewarding. How do they get through that first chicane, or overtake in the middle of the Lesmo? A mixture of physics and impregnable self-belief, I guess.

Halfway into the first lap, my patience expires and I give the P80/C the beans in second gear. Honestly, it doesn’t reel in the horizon like a LaFerrari, but it’s not a hypercar, it’s a racing car, and it feels alive in a way no road car ever can, not even a loony one, an audible riot of buzzes and zings, shorn of sound-proofing and utterly fit for purpose. Because I want to keep my job, and TK’s regular WhatsApp lines of enquiry still open, I’m staying well away from Monza’s sadistic sausage kerbs and rumble strips, asking little of either the aerodynamic or mechanical grip. But it doesn’t matter: I’m in a one-off Ferrari freaking racing car.

Unencumbered by any road or indeed competition homologation regulations, the team that created the P80/C enjoyed an exceptional degree of creative freedom. The 488 GT3’s underpinnings mean the wheelbase is 50mm longer than the standard 488, and it only weighs 1,260kg. The new car is reportedly five per cent more aerodynamically efficient overall, and although elements of the rear diffuser are shared with the GT3, the front splitter and all the external surfaces are unique. For Ferrari to be pushing the aero boundaries on a one-off underlines how special this car is – and how far the company is prepared to go.

Although the innermost workings of the client/Centro Stile relationship remain closely guarded, TK is able to shine some light on the process. “We sat down with Flavio and the design team and carefully described the raison d’être behind the car. That was very important to me – that they understood why we wanted to build this car,” he explains. “It wasn’t for vanity nor was it a chance for us to dictate to them what to do – this was an opportunity for us to make something special that we can be proud of for years to come.”

The freedom they were given was startling. “Ferrari gave us an almost open slate to work with once everyone was on board the project. We needed to make sure both parties saw eye to eye with our vision for the car, so I knew they were as enthusiastic as we were to commit to bringing this to life. In all, it took us over four years to see this car go from sketch to metal – but that was a reflection of the commitment I made to them in our first conversation.

“We worked closer with Flavio, the design team, engineers and more aero specialists than any other SP project to date,” he continues, “and we wanted to be sure that it was absolutely perfect to all parties involved before we showed it to the world.”

It wasn’t always going to be based on the 488 GT3. “At one stage we considered a 458 GT2 base, but we chose the then in-development 488 GT3 platform in 2014 to ensure the car was built on the most modern race chassis available at the time. That allowed the designers access to the latest tech and to push boundaries.”

Naturally, this presented some challenges. “Certainly, there were aspects that were difficult to execute due to aerodynamic efficiency, engineering or proportions given the base that we selected to work with,” TK says. “But no matter what platform we chose, we were going to try to extract even more mechanical and aerodynamic performance out of it.”

Well, it worked. TK is a serial Ferrari owner and collector, but the SP experience has sharpened his resolve to do more. The first man to build a Ferrari one-off based on a racing car is looking into other multi-cylindered possibilities. Watch this space.