Is it possible to swap out the beating heart of a Citroen DS for batteries, and still retain its je ne sais quoi? Mais, oui!

Behind me, sitting in the big sofa of a back seat, I have passengers. They’re the ghosts of the DS’s creators, but the apparition doesn’t feel sinister. They are surely delighted, finally satisfied that after all these years this is exactly the DS they would have built were they able.

It’s beyond argument that the DS is one of the most beautiful cars ever. But also for its era the most advanced, both stylistically and technically. During its Paris show appearance, Citroen took 80,000 deposits, a record unbeaten until Tesla’s Model 3. Right from its 1955 debut it had high-pressure hydraulics for the self-levelling suspension, steering and brakes, which had discs mounted inboard to cut unsprung mass. It ran on radial tyres. The monocoque body had demountable panels and a lightweight glass fibre roof. Later, that shark nose got faired-in headlamps that steer around corners.

But none of that is what we’re here to talk about. Because missing from that list of advances is the propulsion. The DS was meant to have a new flat six. But Citroen ran out of money, so it inherited the boring pushrod four from the older Traction Avant. 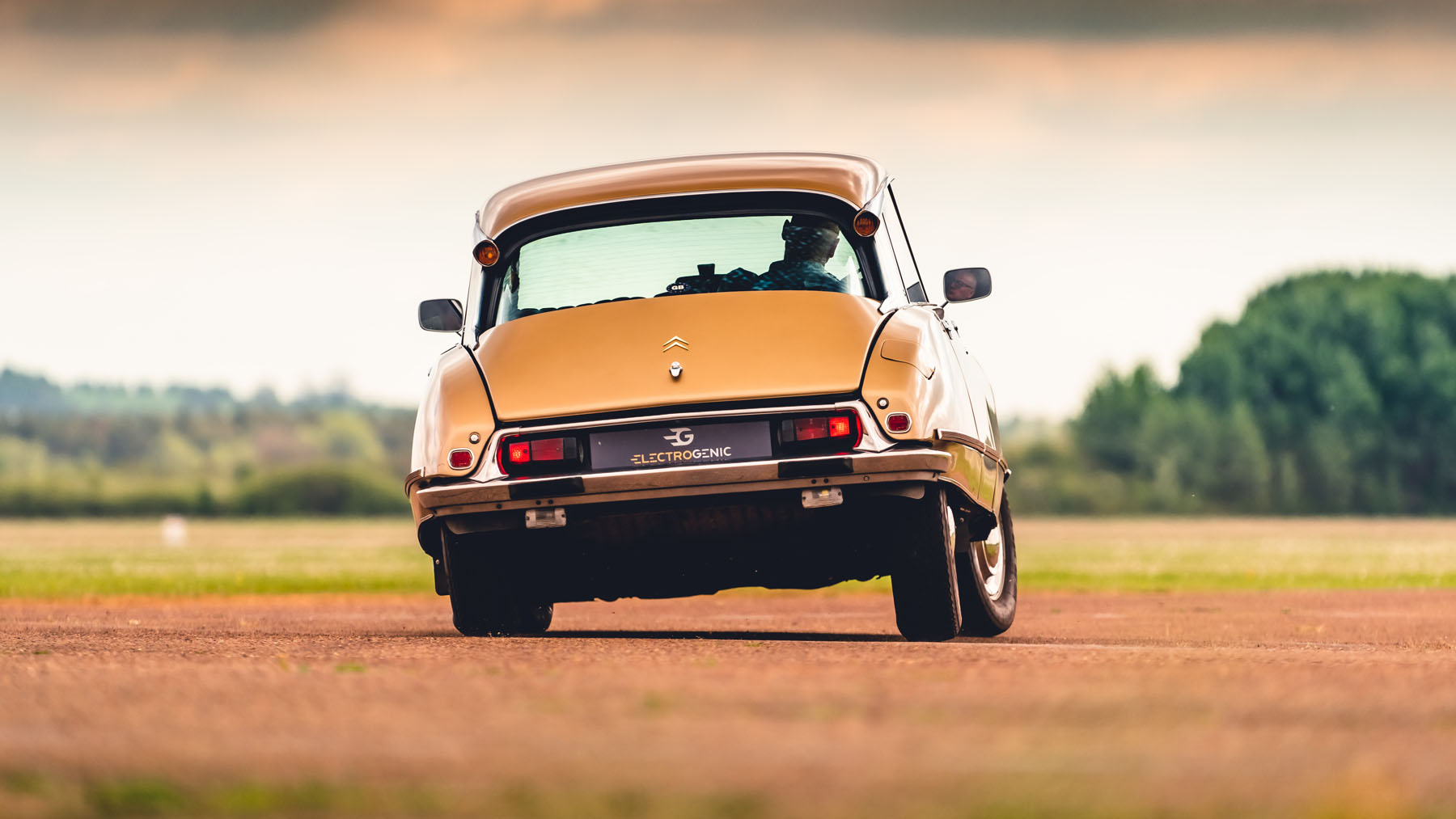 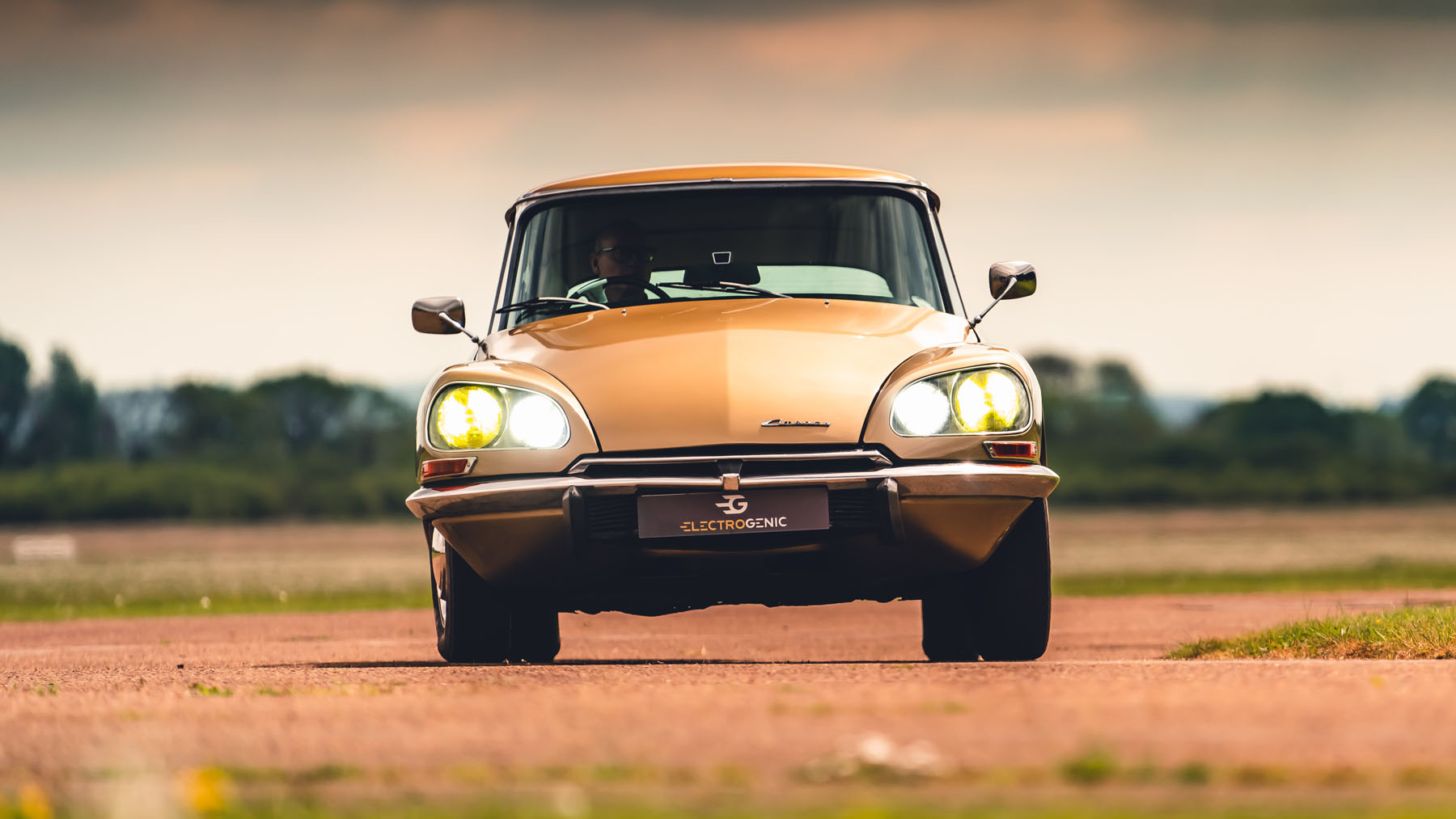 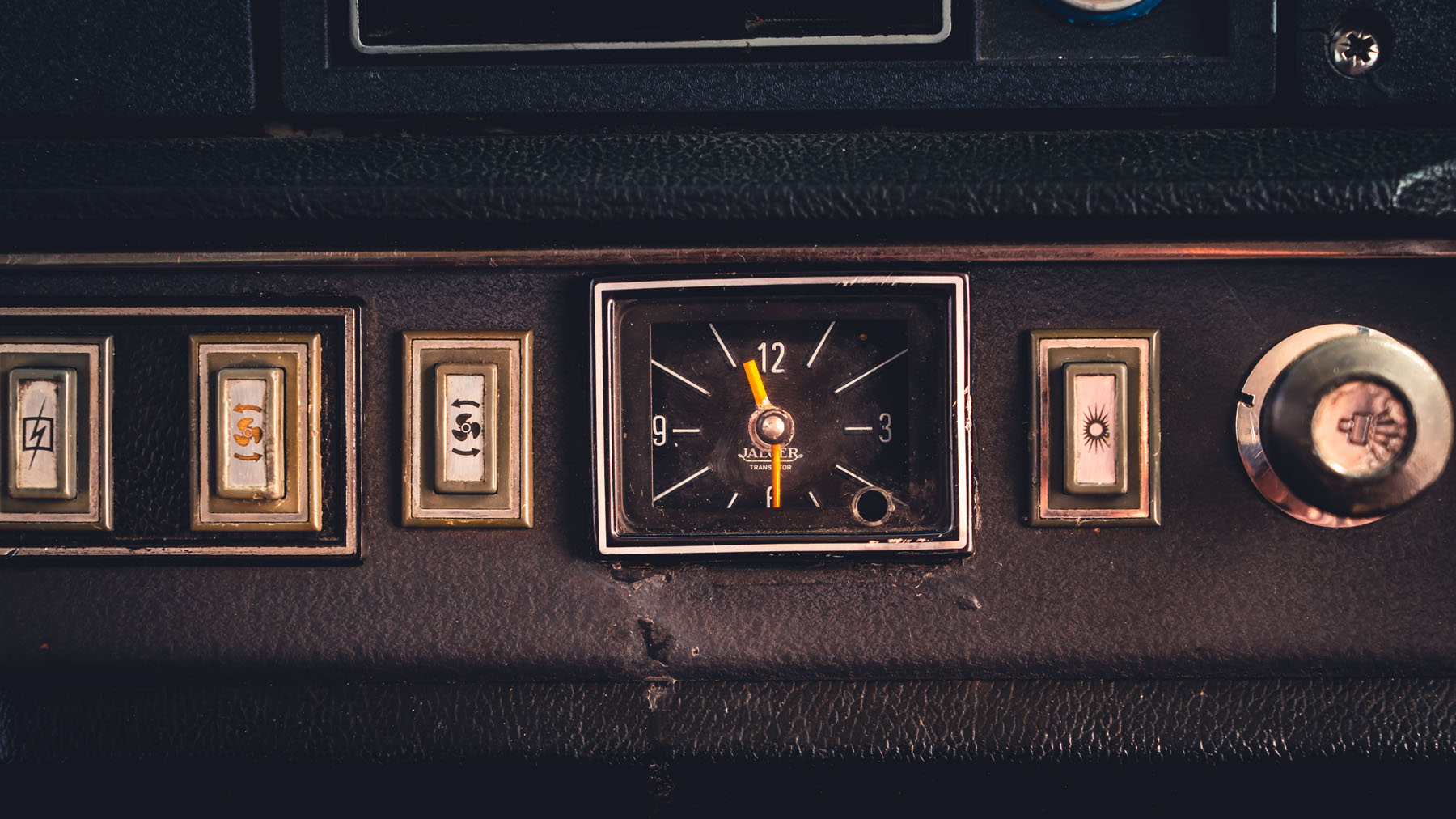 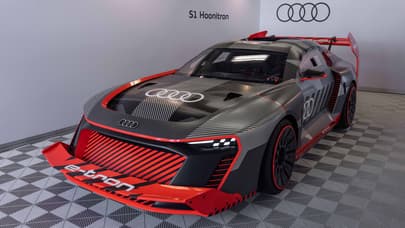 So it makes perfect sense to replace that with electric drive as Oxfordshire converter Electrogenic has done. You might think other electromods – perhaps evicting a wonderful Jaguar XK engine or a Porsche flat six – are sacrilege, but surely you can surely get behind a transplant that gets rid of an engine the car’s creators never wanted. Or do you fear an electric drivetrain will subtract from the complex engagement of driving a classic? Carburetted engines cough and splutter; old gearboxes have weak synchro. Negotiating that lot takes skill. Wouldn’t a one-gear electromod be duller?

Well bless my soul, this one has a clutch and gears. It runs at a lower voltage than today’s electric cars – 110V instead of 400 or 800. This simplifies the installation. It also means the motor has a narrower rev range, so it’s worth keeping the original gearbox. Of course the motor, unlike an engine, can drop to zero revs. So in town if it’s not hilly you can just stick it in second or third and drive like a ‘normal’ EV. But for interest – and efficiency – you can use the upper gears on faster roads, and shift down to get extra regeneration, which adds range because it’s not a blended brake system.

As with anything mid-century Citroen, the gearlever is unconventional, a large wand branching off the steering column. It’s not actually intimidating to operate, easing through its up-down gate with a gentle ker-lunk. One rather hilarious touch is this car still has its original choke knob. Pull it out and you switch the motor, for reversing. Oh and one more quirk. Although you use the clutch for changing gear, you don’t touch it for starting or stopping because, remember, the engine’s ‘idle speed’ is zero. 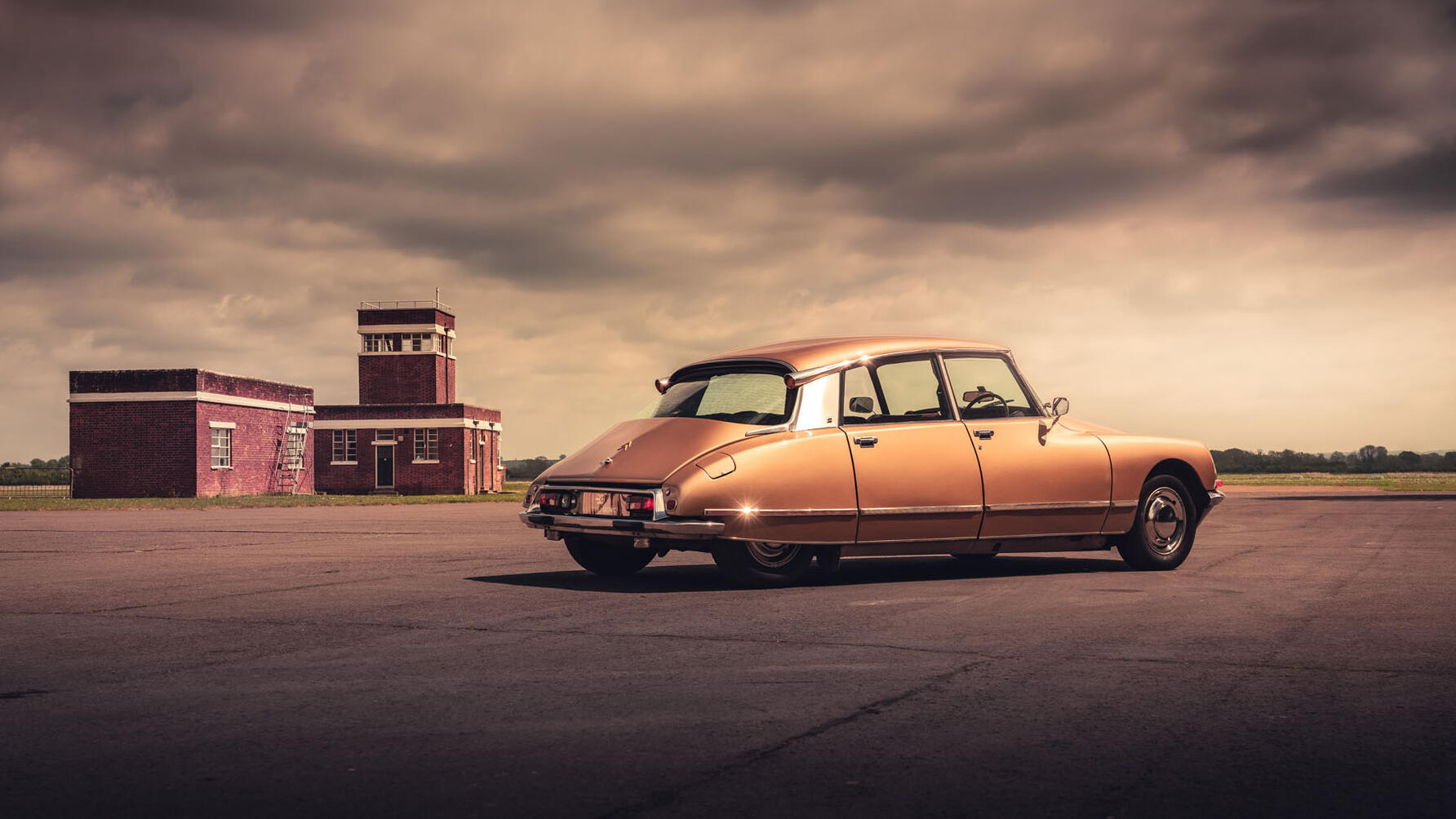 Open the gorgeously contoured door, sink down into the pillowy seat and activate the systems. With a hiss the body gently arises from its slumbers. The accelerator has a long travel, with a very gentle tip-in, so it’s easy to be smooth. But flex your ankle all the way and it has the sort of surge that, while not overdone, is definitely handier than the original. Power is 120bhp. Torque delivery has been carefully mapped to preserve the transmission, which means it rather resembles the long-stroke OHV engine that lived here before.

Batteries sit under the back seat in place of the fuel tank, as well as above the motor under the bonnet. Total is 50kWh. Range would be about 150 miles. Enough for the owner of this car, who drives it daily, to have just returned from a lovely tour of France, with plenty of lunches. You wouldn’t mash the range by hauling down the autoroute, would you now? Because it’s low-voltage, DC rapid charging would cook the cells, so this one takes 22kW three-phase, enough to replenish in just over two hours.

It’s cleverly packaged, stealing not a jot from the immense cabin space, nor the boot. Unless you lift the bonnet, the only sign is the missing tailpipe. The cabin too is as per original, although the glovebox hides a charging info screen. Electrogenic’s conversions swerve criticism of historical vandalism by being wholly reversible: “We don’t cut the original car.” They start by unbolting the newly superfluous – engine, radiator, exhaust, fuel tank – before digitally 3D scanning the original body and chassis. Then they design a package of electric components to fit those spaces and suit the original weight distribution: batteries, motor, charger, inverter, DC-DC converter and cabin heating. In the case of the DS and a Rolls Silver Shadow, also fluid suspended, they built an electrically driven hydraulic pump too.

It’s costly, of course. Electrogenic doesn’t like to put a number on things until it has had an honest talk with a prospective customer about how the car will be used. People tend to start by overspecifying, paradoxically. It’s not a prix fixe menu. Most of Electrogenic’s conversions are bespoke, and it offers loads of choices in motor, battery size, voltage and more. (There’s a cheaper drop-in kit for Land Rovers, as used at Glastonbury’s Worthy Farm, and there will soon be one for Minis.) You’d be looking somewhere around £40,000. But then, look what people spend on engine rebuilds for their classics. By the way, if you still don’t fancy this gearshift business, and want rapid DC charging, Electrogenic can also design and build 400V single-speed conversions. Anyway, electrification will future-proof a much-loved heirloom, as well as make it city friendly for today. 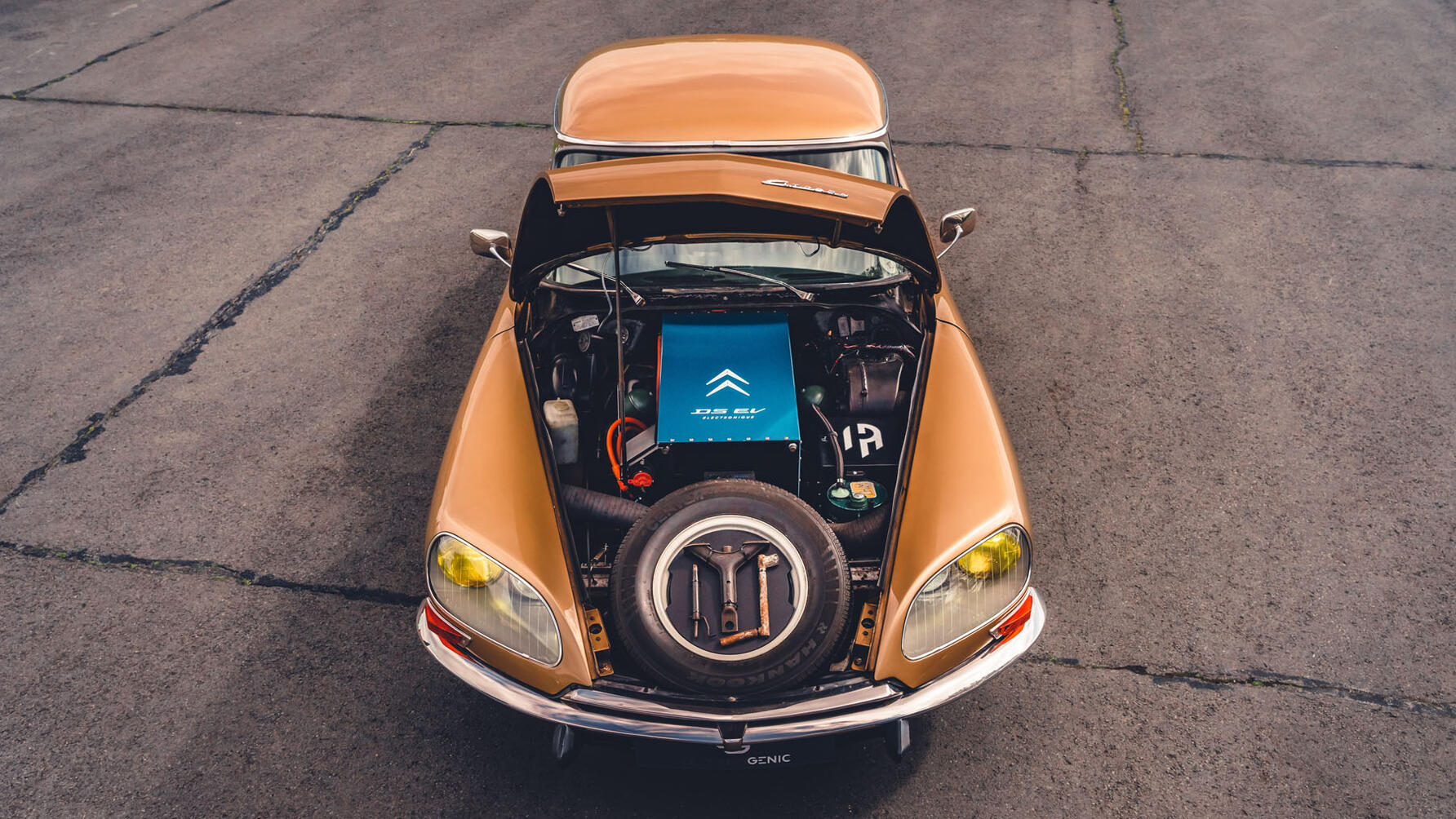 And boy you’d want to future-proof a DS. It might be worthy of exhibiting as a static sculpture – it often has been, and indeed its designer Flaminio Bertoni began his career as a fine-art sculptor. But the DS’s imperative is to move. From the outside its shape animates captivatingly with changing light and angle. From inside its look and engineering were, and remain, magical and deliciously other. It’s utterly French, a combination of fiercely independent Rive Gauche intellectualism with a hedonistic luxury.

This 1972 example has a lovely period scheme of browns – Ambre Solaire paint, grand-crème carpets, pain au chocolat seats... not so much seats as deeply cushioned fauteuils that gently caress your body. And yellow headlights, of course. The single-spoke wheel seems to be wrapped in bar tape from a Seventies Gitane bike. Visibility is panoramic. There’s loads of room, so much so that you loll about in vigorous cornering. 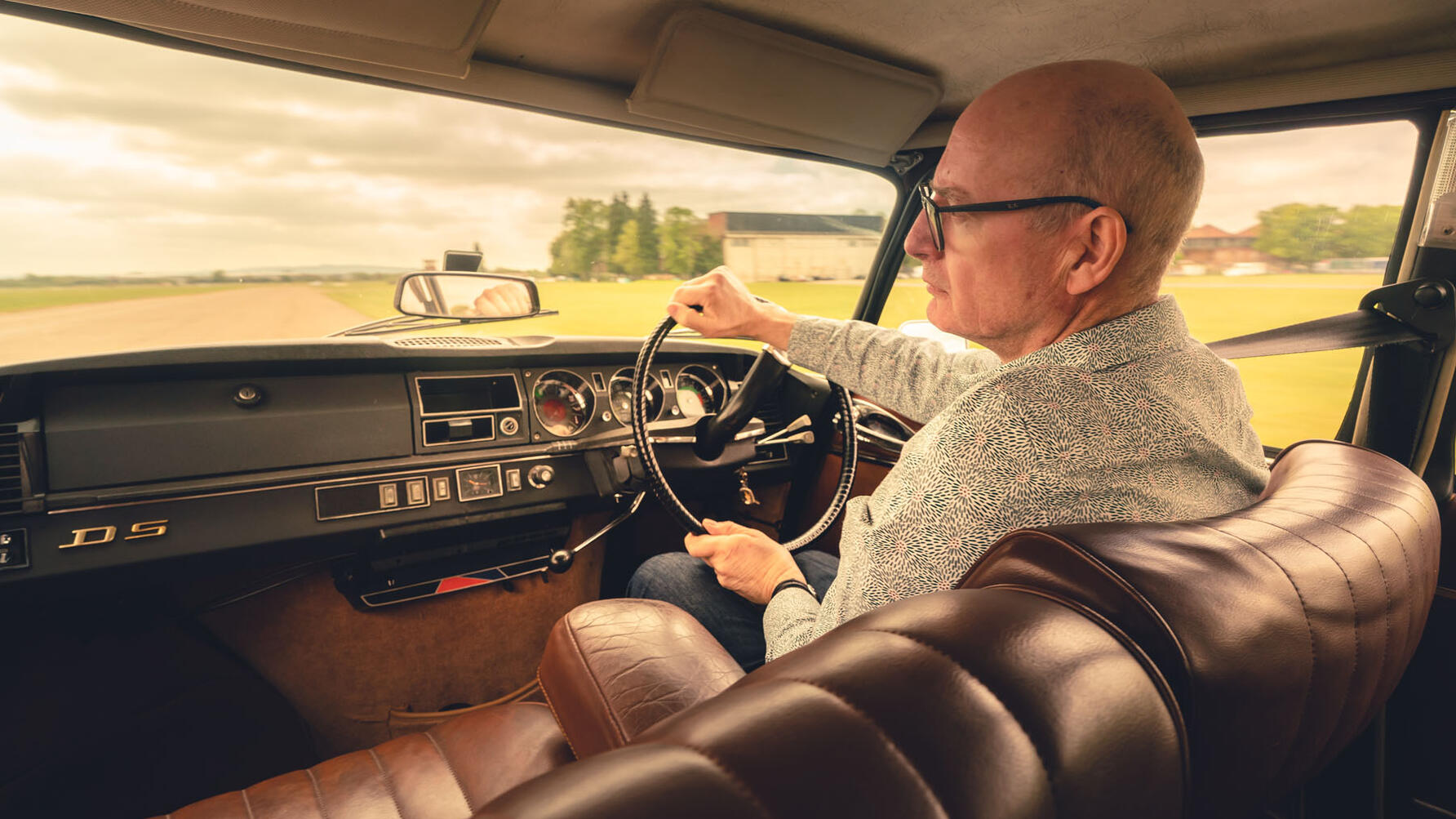 Well, I say vigorous. There isn’t much grip, so the roll angles are less than you’d expect. The sensations of pitch and heave are hardly more than in, say, a modern LR Discovery. The steering is very precise for an old car, and understeer isn’t an issue. The high-pressure brakes are a world better than in most old cars. You soon get used to their zero-travel rubber bulb ‘pedal’. And the ride. Oh the ride. Sharp potholes can intrude, but you mostly float along like a plane just above the runway.

So, yeah, the DS really does live up to its design. Engineering and art intersect at a near-supernatural locus. It’s elevated even higher by this silent electric impulsion, and the ghosts can ride in peace. 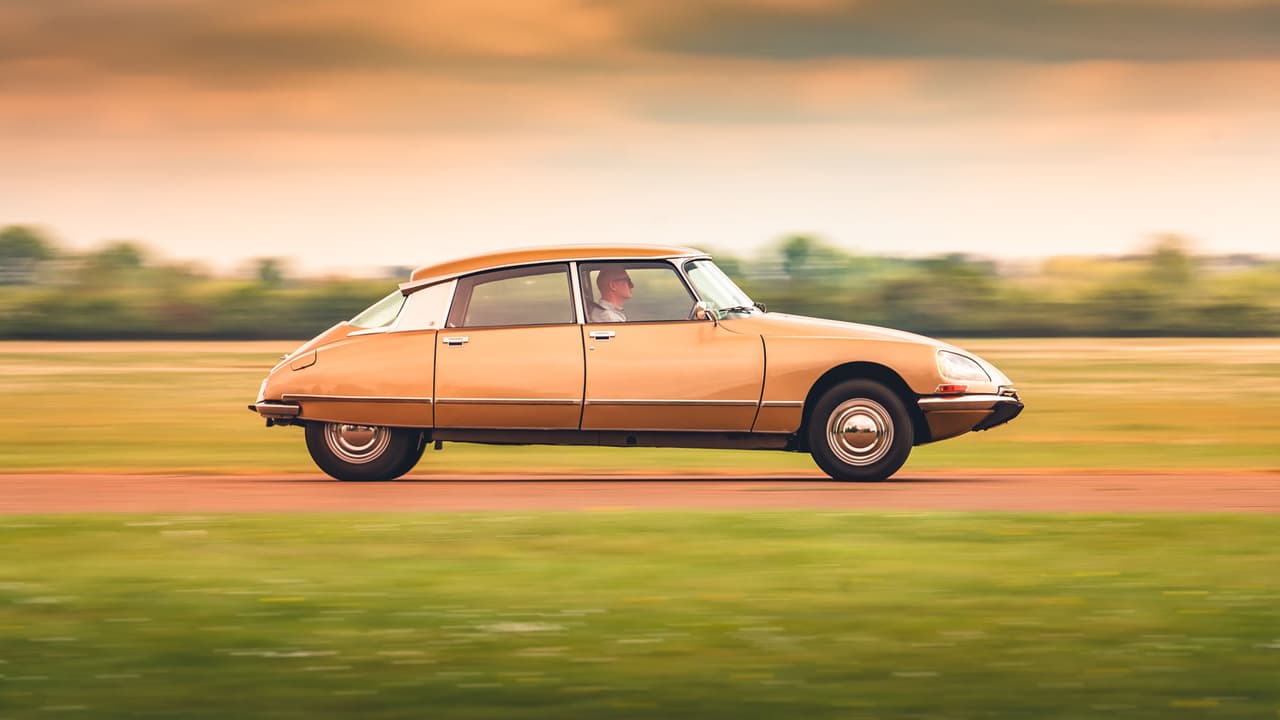