A centenary normally calls for a celebration. But there sure as hell weren’t any party poppers going off when Australia’s car industry hit the big hundy.

Rather, on October 20 2017, after 100 years of domestic car manufacturing, it hammered a final Holden Commodore-shaped nail in the coffin. Due to expensive labour rates, crazy taxation, a lack of government support and a shift in consumer taste, this would be the last car Australia produced; vanquishing an entire industry and 200,000 jobs in the process. With Toyota pulling the plug weeks before, and both Ford and Mitsubishi long gone, Holden was the last giant to fall. Bad times. 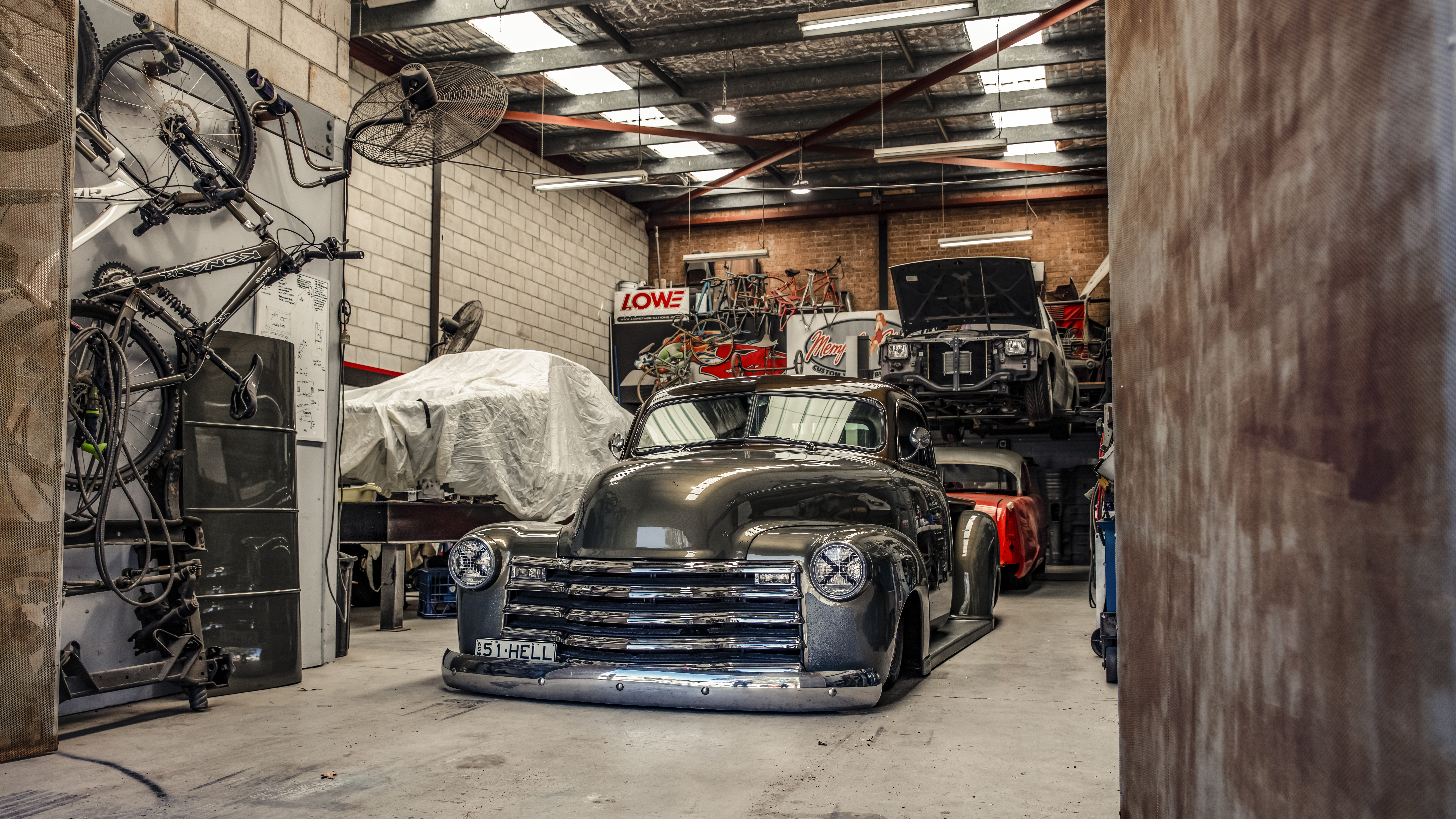 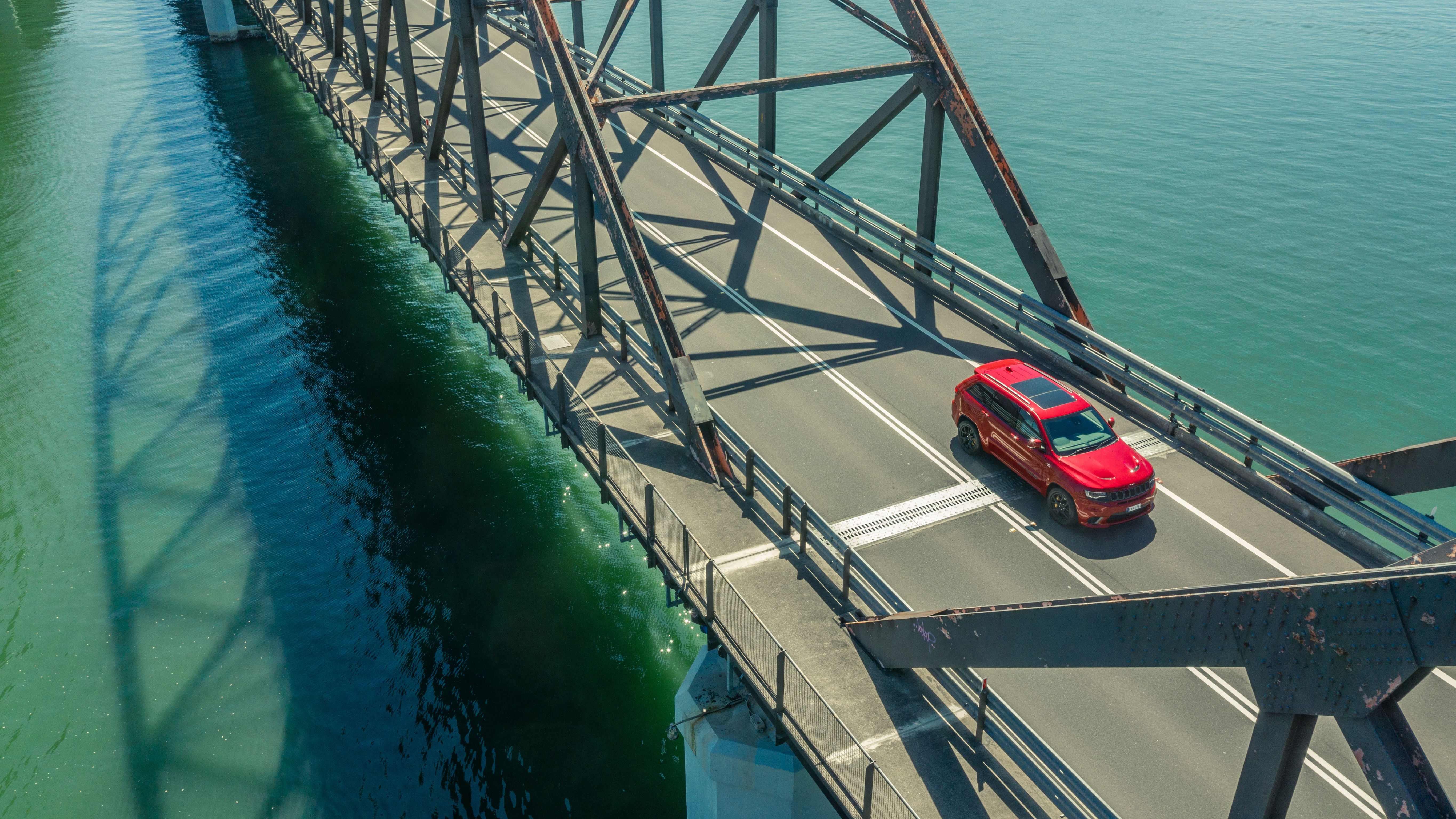 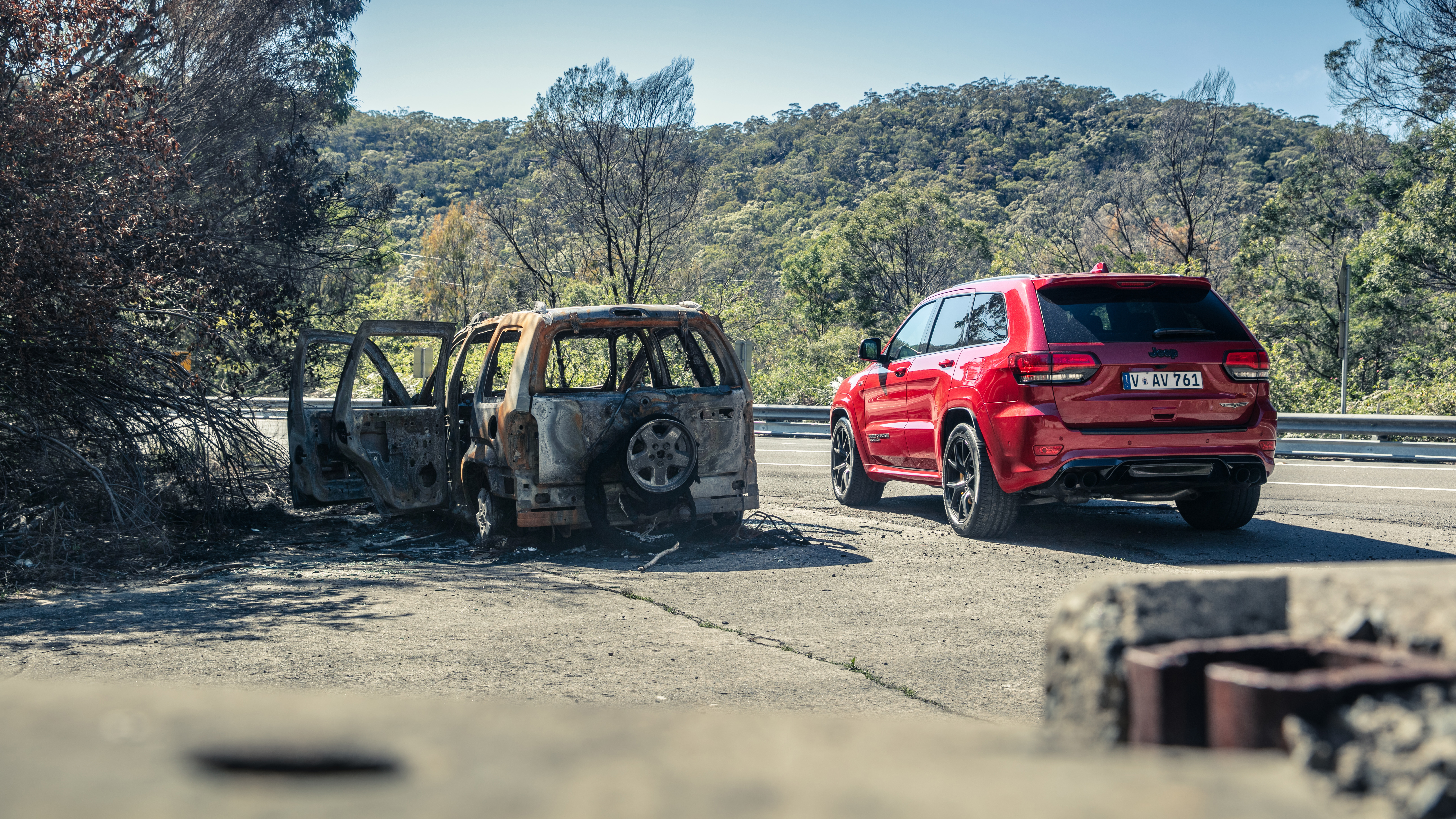 One year on, TG wants to see who is keeping Aussie car culture alive. Because, if social media is anything to go by, the doom and gloom has fuelled some sort of nitrous-injected renaissance. But to do so requires a car. And as Australia no longer makes them, we had to ask the Americans... who ironically make the most Australian car on the planet: the Jeep SRT Trackhawk.

Thanks to dropping Dodge’s wondrous 707bhp, supercharged 6.2-litre HEMI V8 from the Hellcat into a humble Jeep, it’s a big bipolar bear of performance and usability. It also ticks off Straya’s petrolhead population’s shopping list; a cylinder count of eight, forced induction and silly, silly power.

So, saddle up and join us as we spend 24 hours in Sydney, scratching away at six scabs of intrigue to uncover why Australia does car culture like no one else. 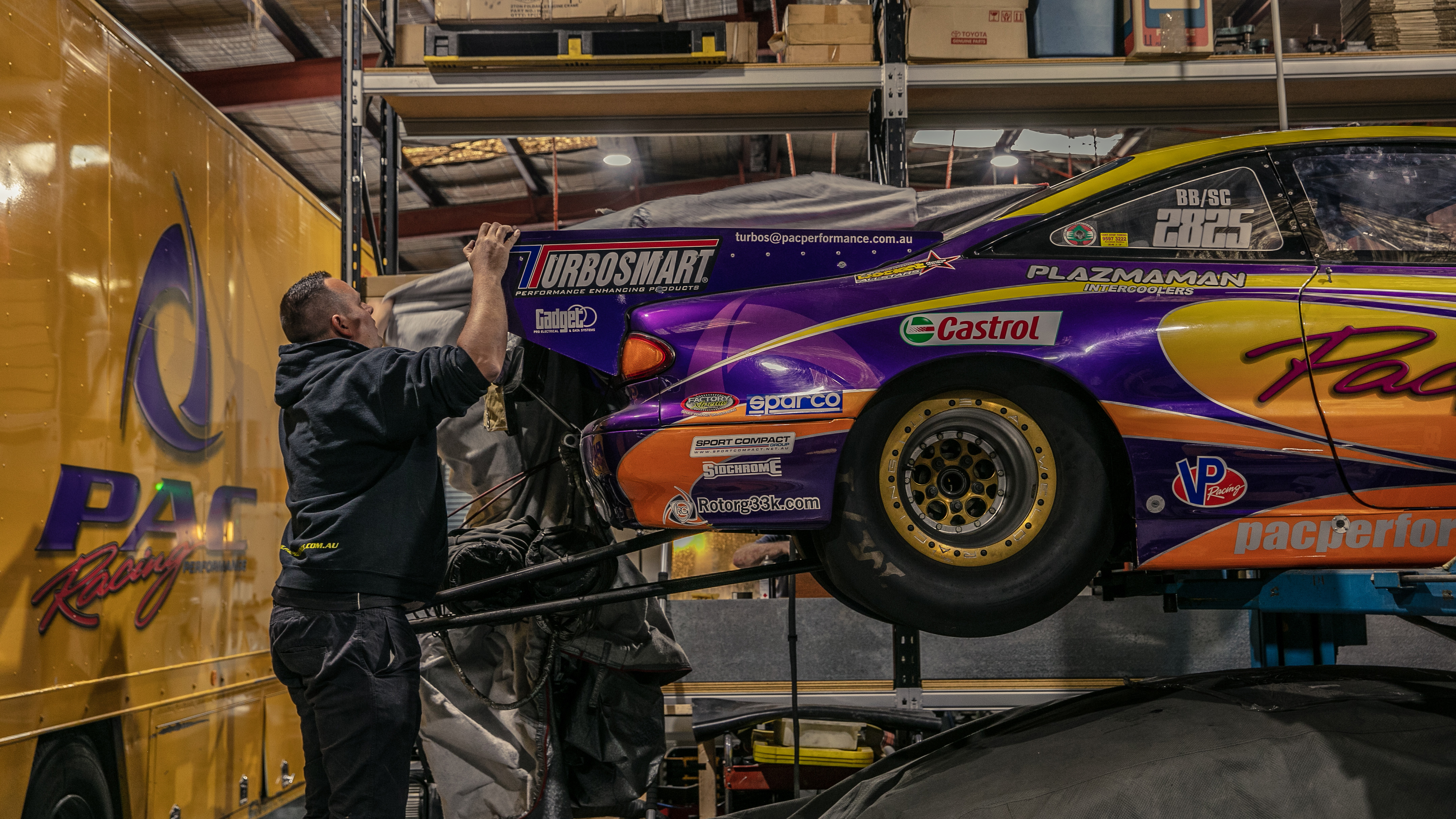 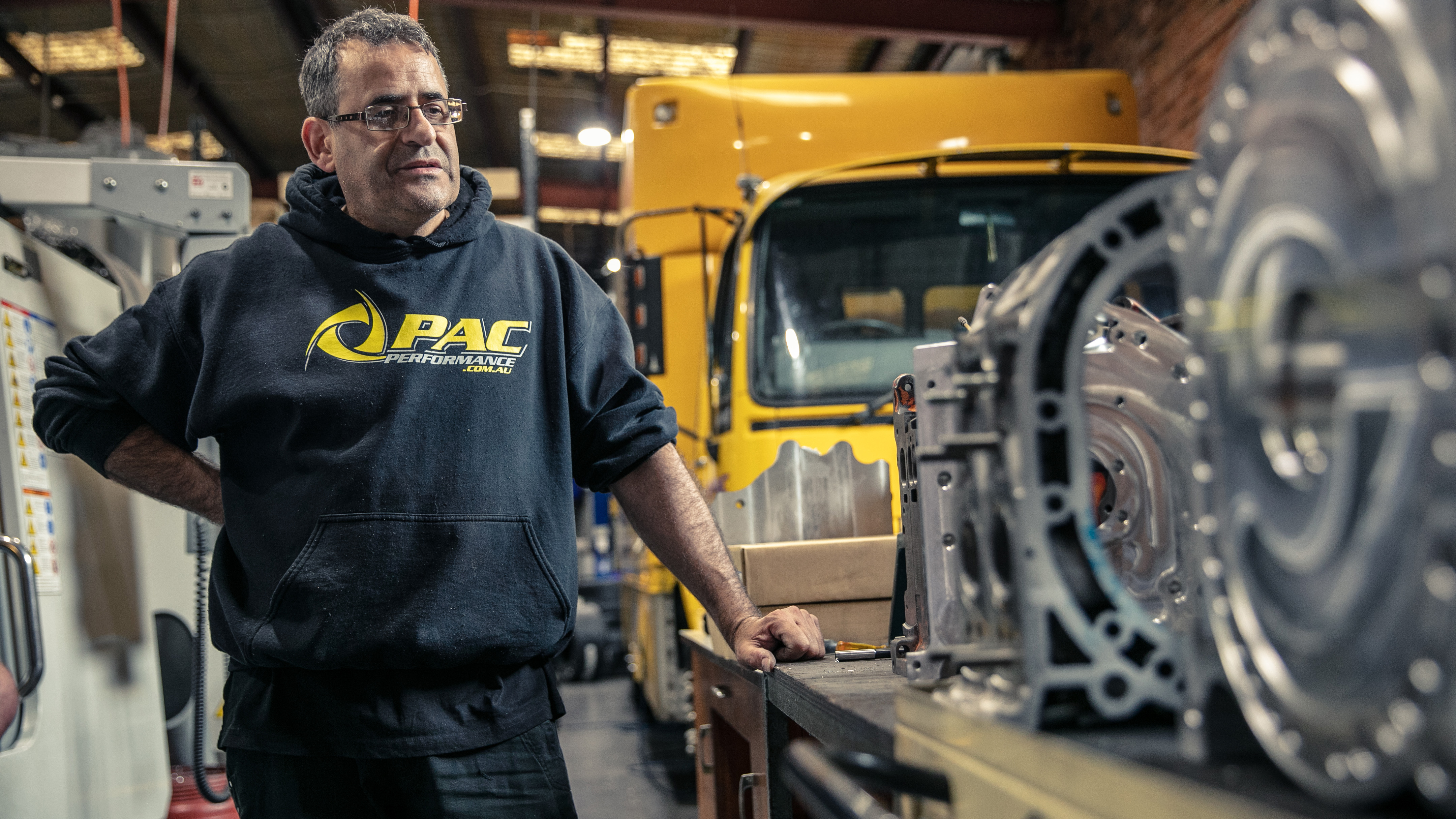 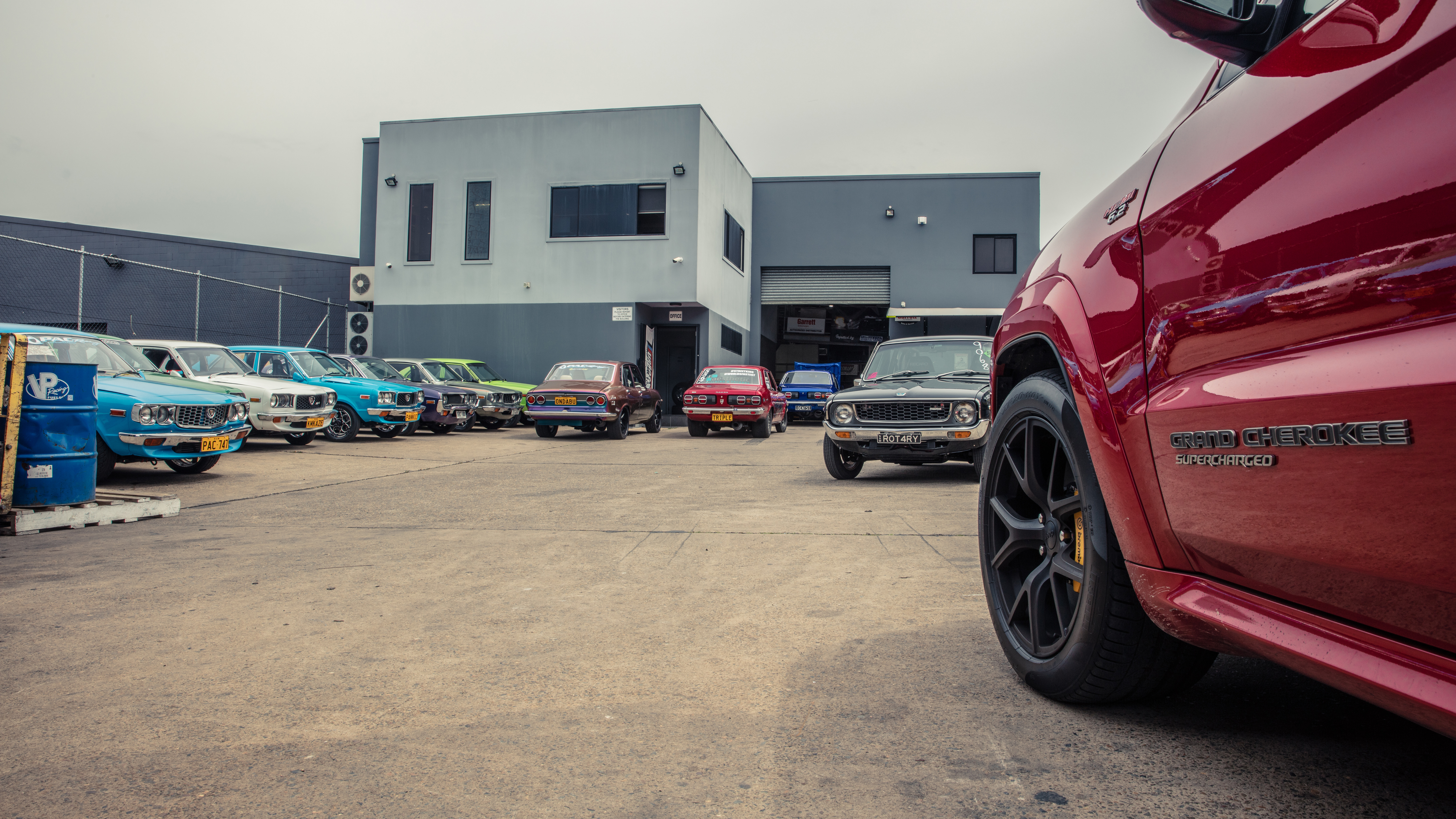 First stop: PAC Performance and instant regret regarding car choice. Burbling up in the Trackhawk, the hostility radiating from shop owners Rocky and George Rehayem is toxic.

See, these two are a proper pair of Wankelers. Since the early Nineties, they’ve been producing the most powerful (up to 2,000bhp) and fastest rotary-powered Mazdas on the planet. So bulldozering my way into their incredible facility with pistons, valves and cylinders is a brave move. No, not brave. What’s the word? Ah, yes... Stupid.

Why? Well, Australians don’t get into car brands through massaged marketing messages – they’re born into them. Car ownership is a tribal landscape, one where the roots run deep, and Rocky and George are rotary ’til they die.

“I grew up racing motorbikes,” Rocky, the brains behind the operation, says. “One day someone told me there’s a car engine with a powerband like a two-stroke. ‘Bullshit,’ I thought. But then they took me out in an RX-3, and I had to have one.” So the next day he bought one and fell in love with its simplicity.

If you’re not familiar with rotaries, imagine a triangle spinning inside an oval housing like a rotisserie Dorito. This whizzes around creating chambers that expand and shrink, so when you pop the fuel and spark in at the perfect time (which Rocky is a black belt at) you have a three-phase version of suck, squeeze, bang, blow – just every spin is a power stroke. Getting this process right produces mightily effective, lightweight motors – especially when Rocky adds turbos the size of bin lids.

To get his revenge for my V8 arrival, George takes me out in a raucous seven-second street-legal RX-3 drag car. Idling with more braps and anger than a grime MC, he plants his foot and the monster turbo sludges its way through the lag, hits boost and takes off like a tasered ferret. Scared, I eye up the parachute release in the roof. Laughing from his ape-like driving position, George turns to me with a grin, “Still want that silly V8, bro?” 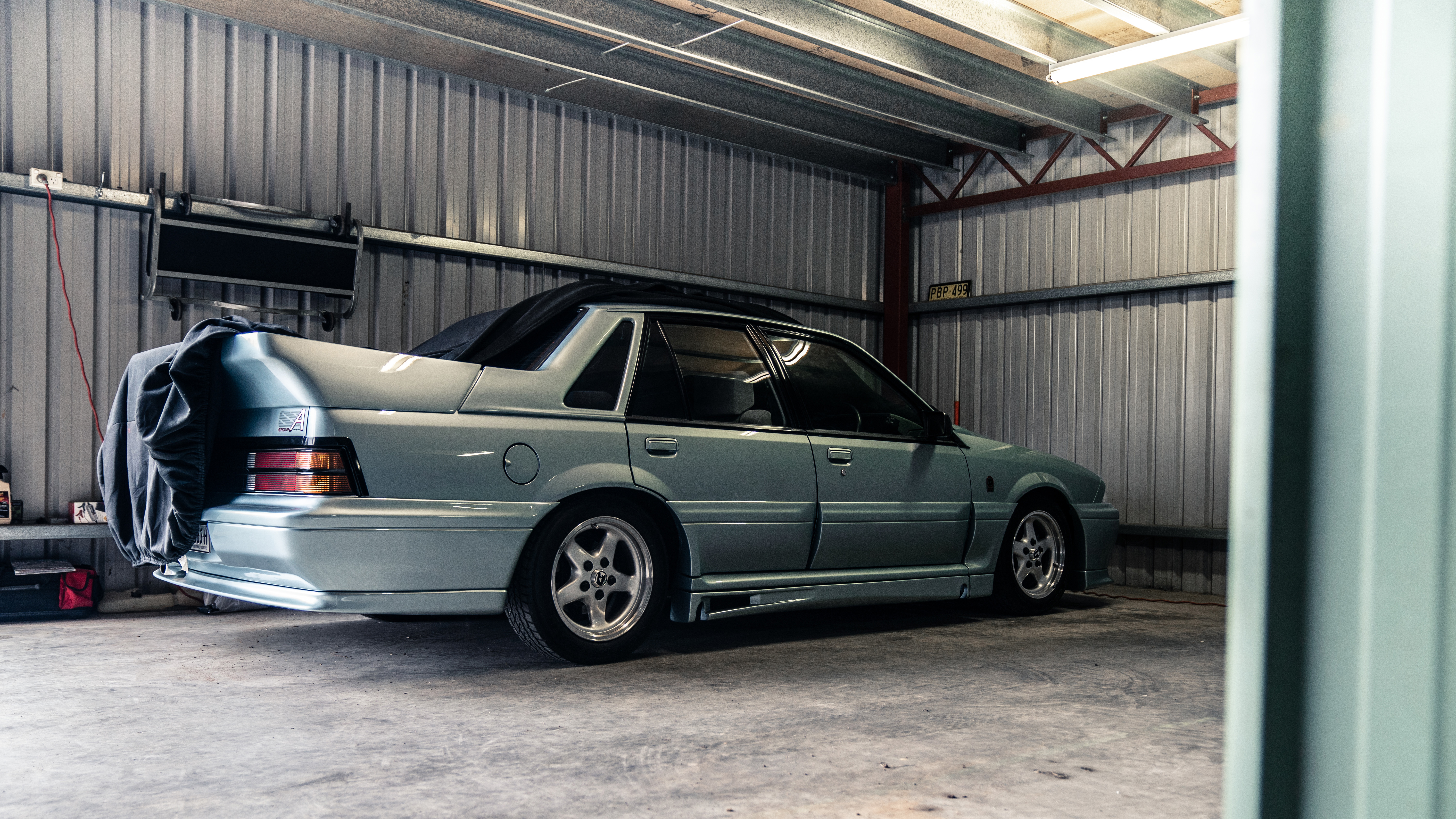 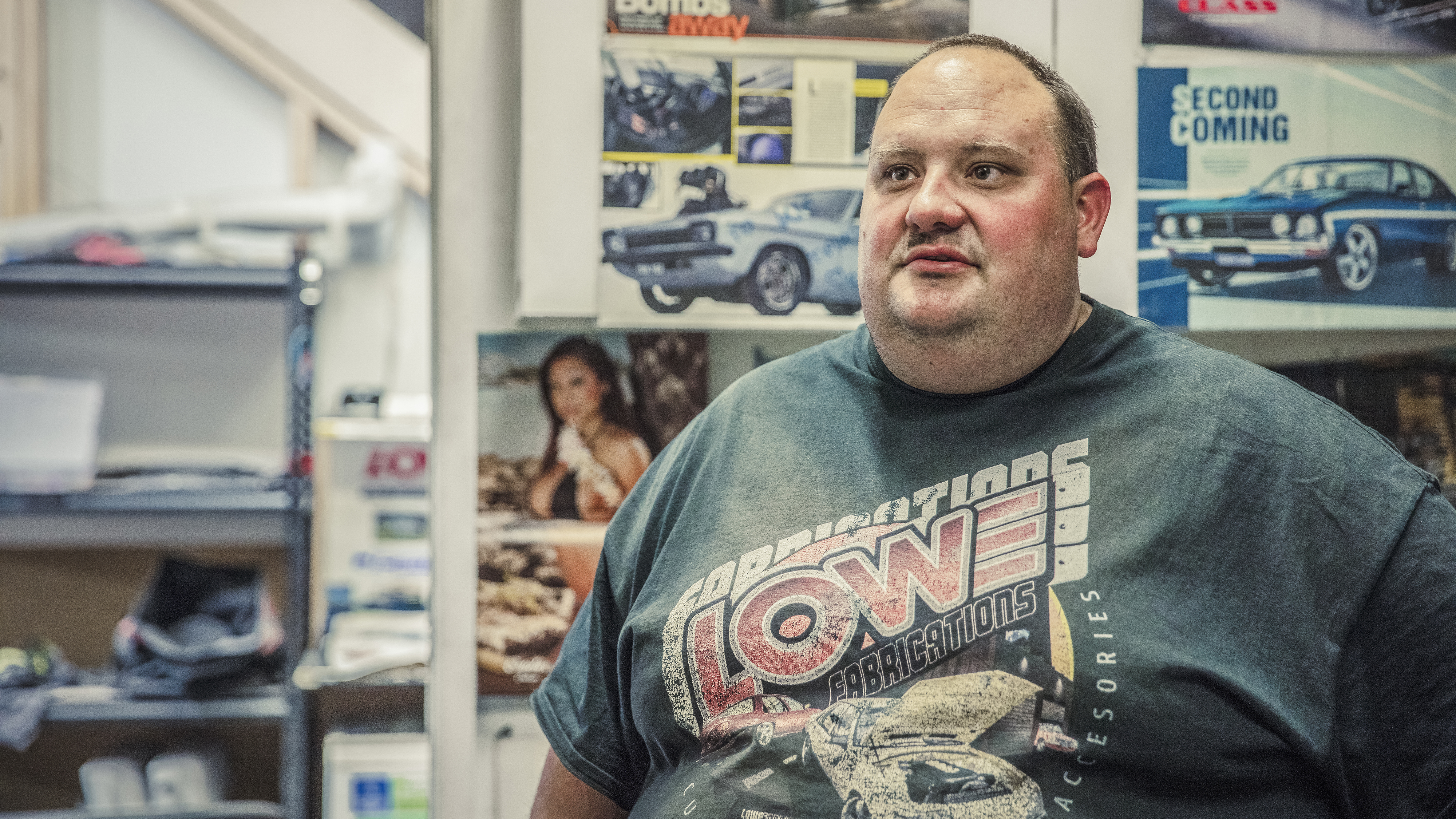 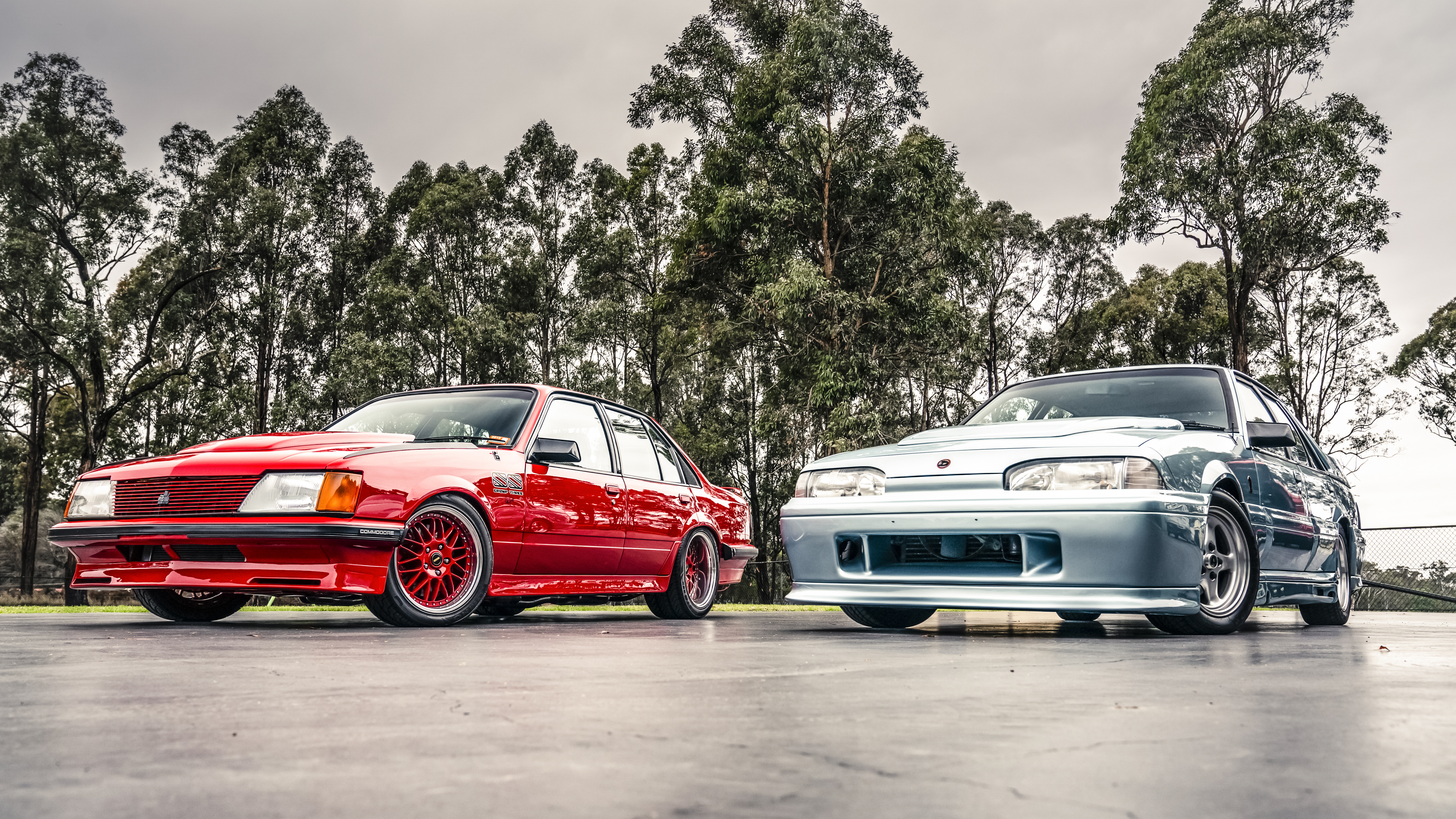 Let’s be clear – Holdens still exist. It’s just now they’re rebadged models from the GM mothership, rather than homegrown – somewhat of a bitter pill for the people Down Under. But if you want to keep your old Holden looking box-fresh but with some added zing, you need to send it to Damien ‘Chubby’ Lowe.

Known as the ‘King of the Commodore’, he’s been at the pointy end of the street machine scene for years. It’s an incredibly Australian aesthetic, street machining. You take a domestic car from the Sixties onwards, fit it with a big engine, big billet wheels and make sure it follows the oxymoronic mandate of being surgically clean but driven on the street. Minters like the Walkinshaw VL Commodore and VK SS Group A are enough to make some people melt. 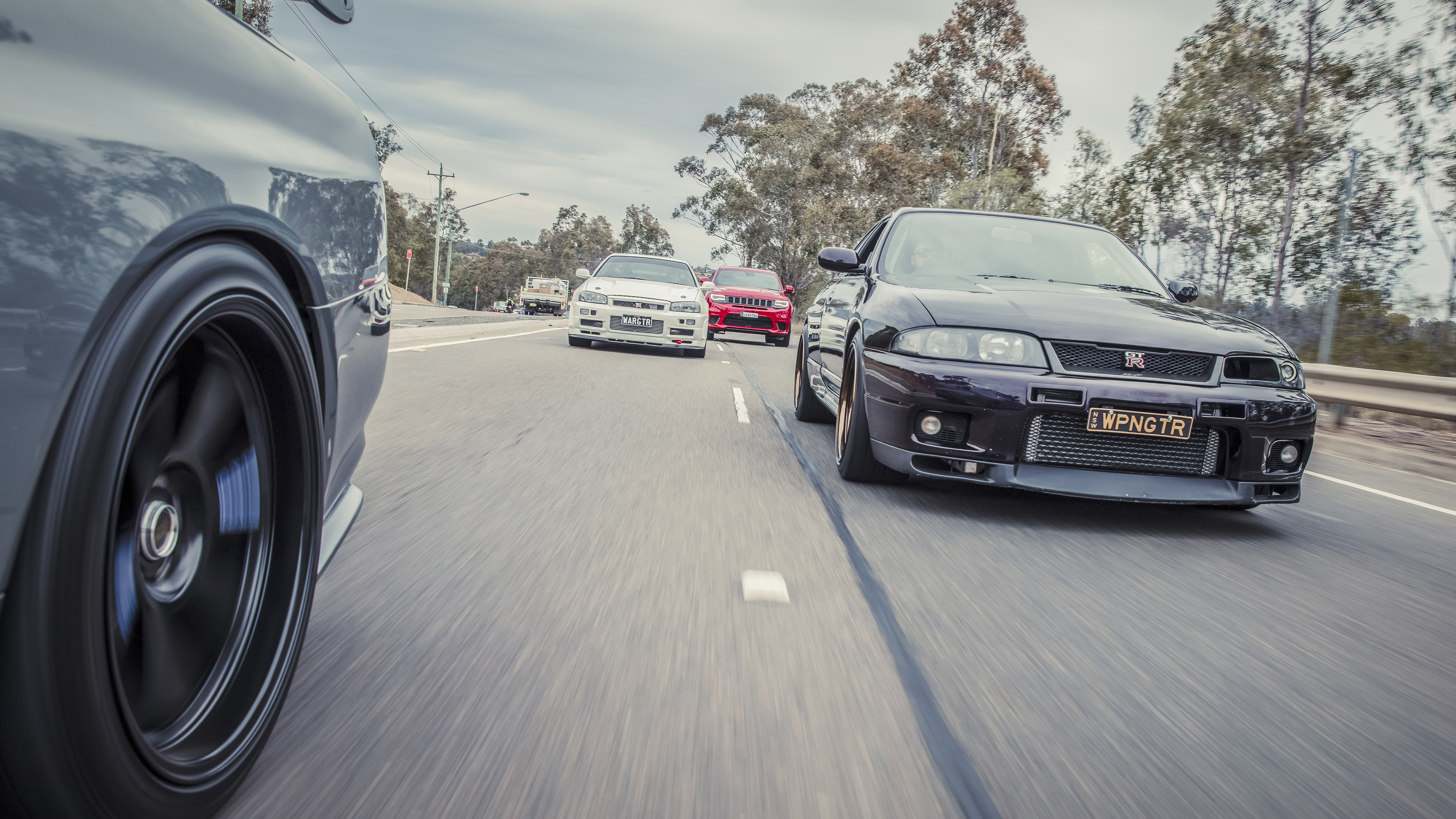 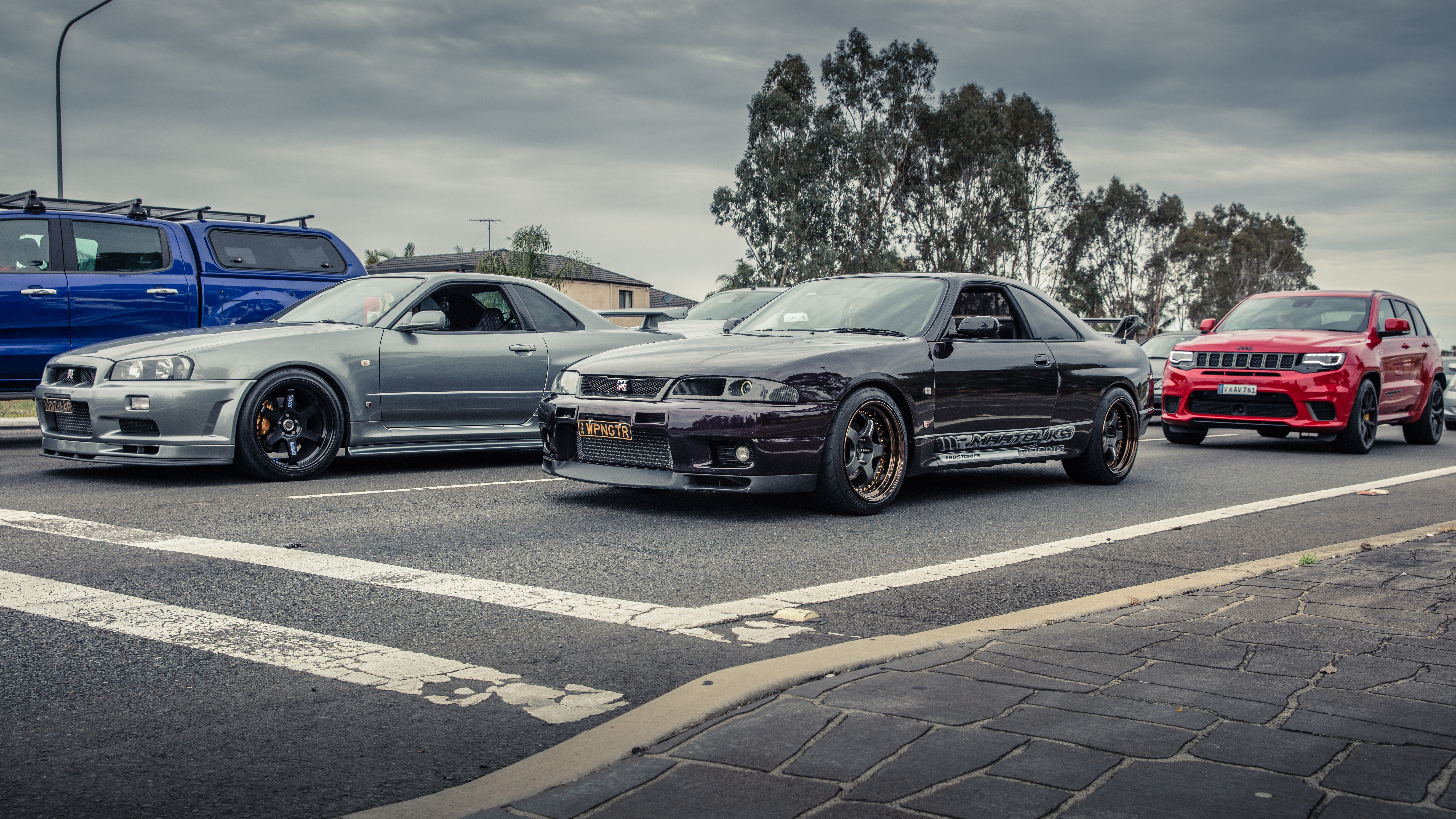 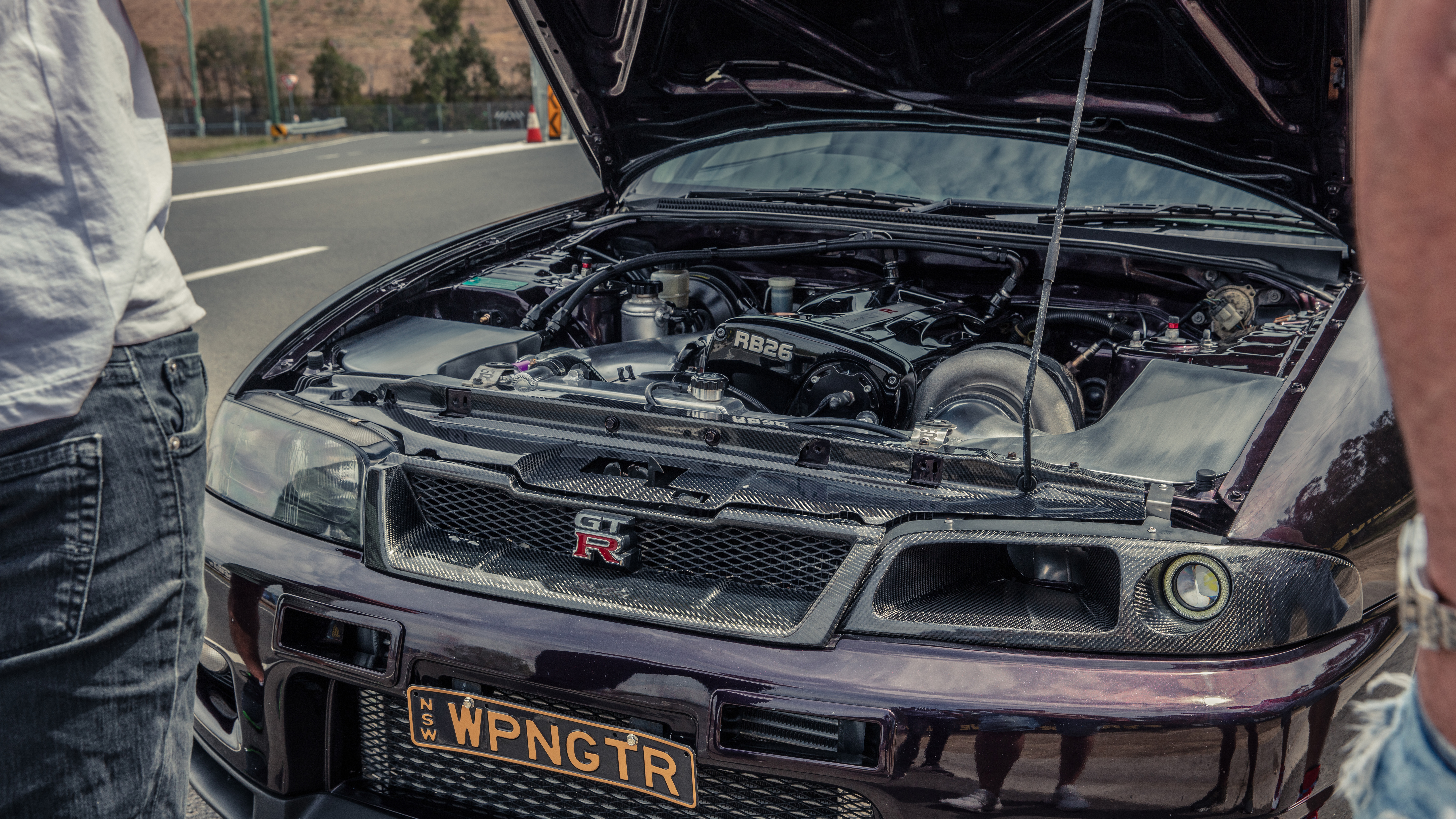 The black box recorder and ‘Sporf’ (a utensil consisting of a spoon on one end, fork on the other, and knife on the side) are just two ways Australia has contributed to the betterment of society. But, there’s one stamp it’s left on car world more than anything else, the immortal nickname for the Nissan GT-R: ‘Godzilla’.

The Aussie press coined the term when Nissan drivers Jim Richards and Mark Skaife won the 1990, ’91 and ’92 Group A championships (the forerunner to V8 Supercars) in the legendary six-cylinder, twin-turbo, all-wheel-drive (with computer-controlled torque split and all-wheel steer) R32 Skyline. But, to then rub wasabi in the wounds, the Japanese also pummelled the V8 Fords and Holdens into red-faced submission during the ’91 and ’92 Bathurst 1000 races. Good old Oz has adopted it ever since and continued the Godzilla legacy. The fastest street-driven GT-Rs in the world reside here, and you have Australia’s unrelenting ‘hooning’ laws to blame.

“We’re in big trouble if the police see us,” the owner of the 1,300bhp white R34 (who wants to remain anonymous, and given the size of his muscles, it’ll stay that way) tells me. “Everything on this car is illegal. Current laws state that anything that’s not from the factory is a defect and eligible for a fine – so they’d end up crushing it.”

In their simplest form, these potty GT-Rs are two fingers to tyranny. The lack of freedom petrolheads now have has bred frustration and therefore a counterculture, just one where they’re using incredible engineering (seriously, the modified RB26 engines are masterpieces) to tell the authorities where they can shove their regulations. 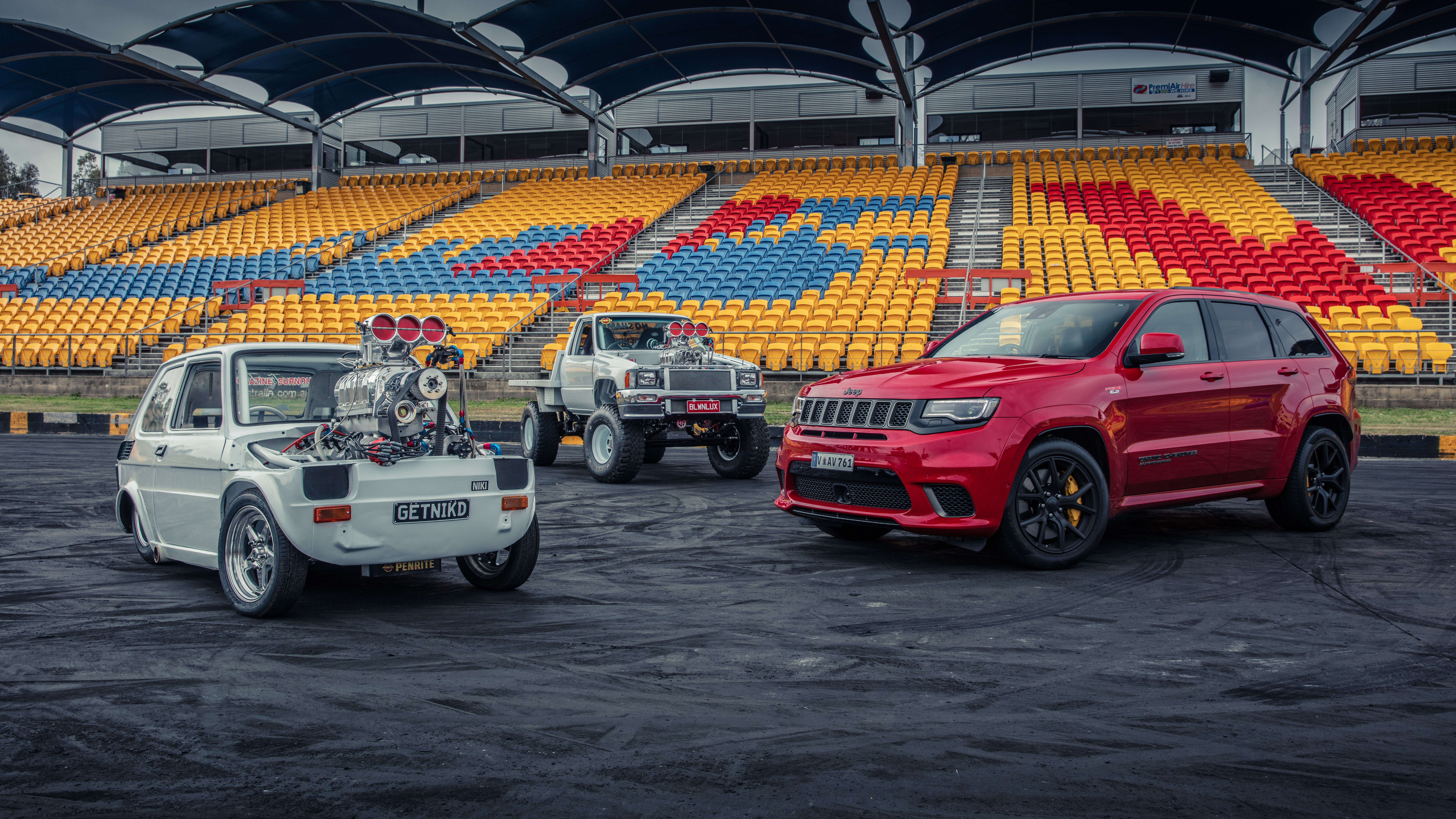 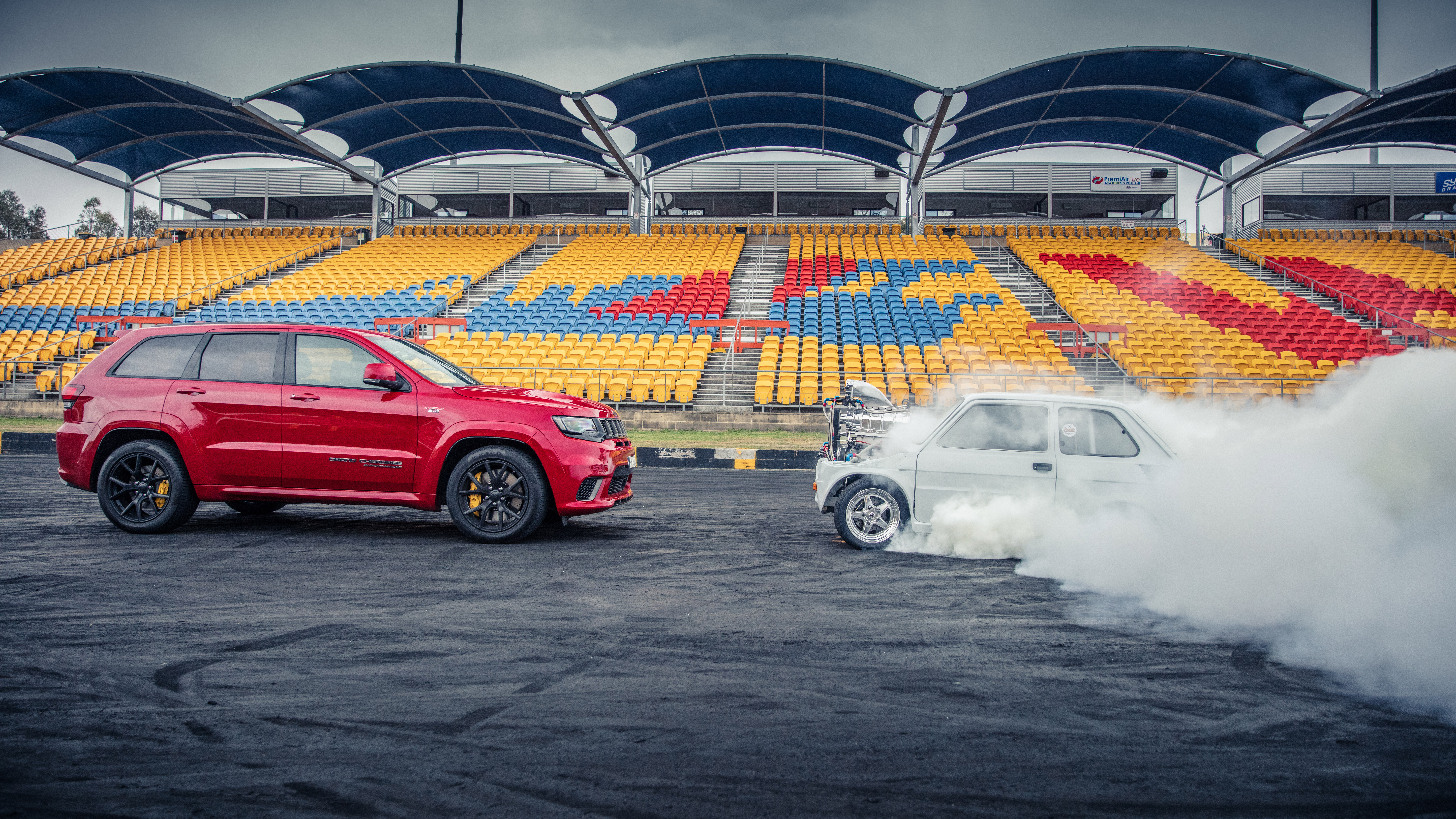 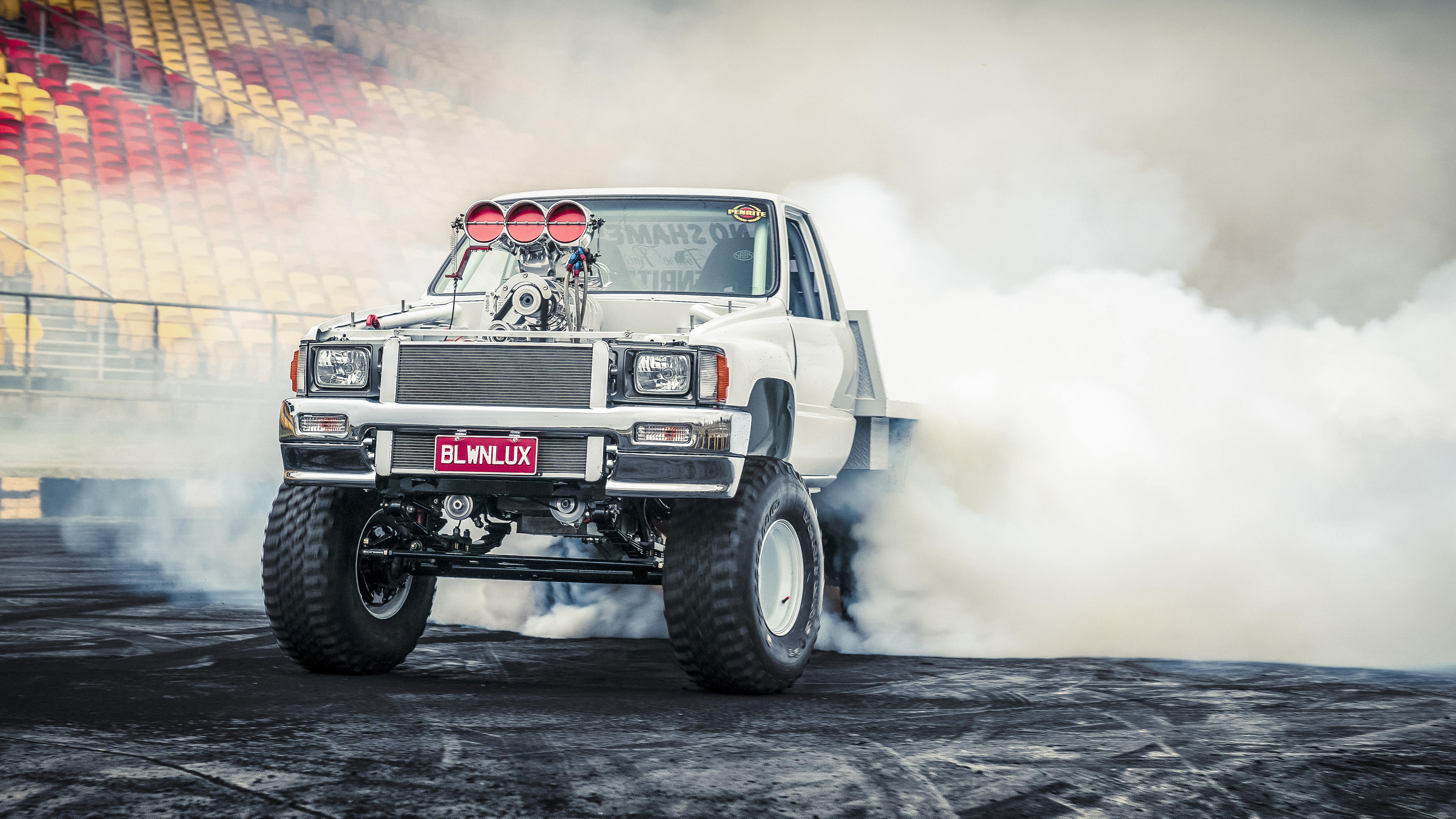 Brett Battersby pops the hood of the Trackhawk and inspects its supercharged lump. “Nice… but it needs one of those,” he says pointing to the two engines bursting four feet out of the bonnets of his Fiat 126 and Toyota Hilux. A boilermaker by trade, he’s also a former champion of the most perplexing form of motorsport on Earth: professional burnouts. As an activity, burnouts couldn’t be more Australian.

Where most competitive driving is about chasing deltas, the sole purpose of professional burnouts is to kill tyres as quickly and theatrically as possible. Most drivers settle for low-slung utes with skinny tyres, but Brett opts for a hefty Hilux with off-road tyres. With over 1,000bhp from a s’charged ‘big-block Chev’, it chews through 100 litres of methanol to produce wheel speeds of 229mph that can turn new rubber to dust in under a minute.

Keen to show me what it’s made of, Brett starts the mighty Toyota in third, mashes the throttle and smoke starts to bellow from the tyres as if it’s on a switch. In competition, drivers are judged on instant smoke, constant smoke, volume of smoke and driving skill. Brett whips the pickup into vicious pirouettes around the arena. As an act, it’s one of the most violent things I’ve ever witnessed. Smoke is sucked into my lungs as fire belches out of side pipes and chunks of rubber thwack me in the face. I’m pretty sure it’s the closest thing you can get to being waterboarded by a volcano.

Incredibly, things don’t stop when the tyres go pop. Or even when the Hilux self-immolates. Nope, normality only resumes when the fuel tank runs dry… 60 seconds later. 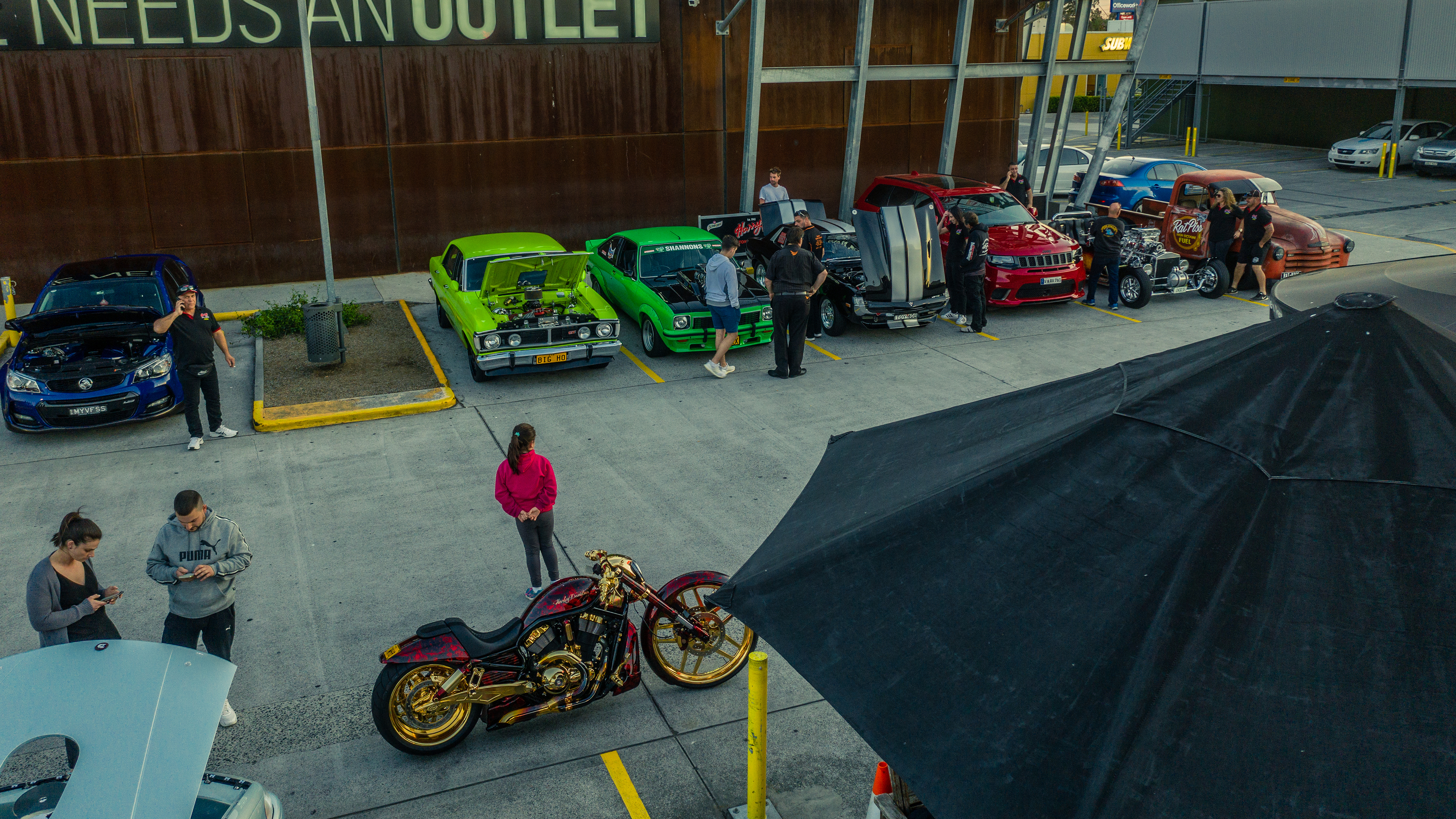 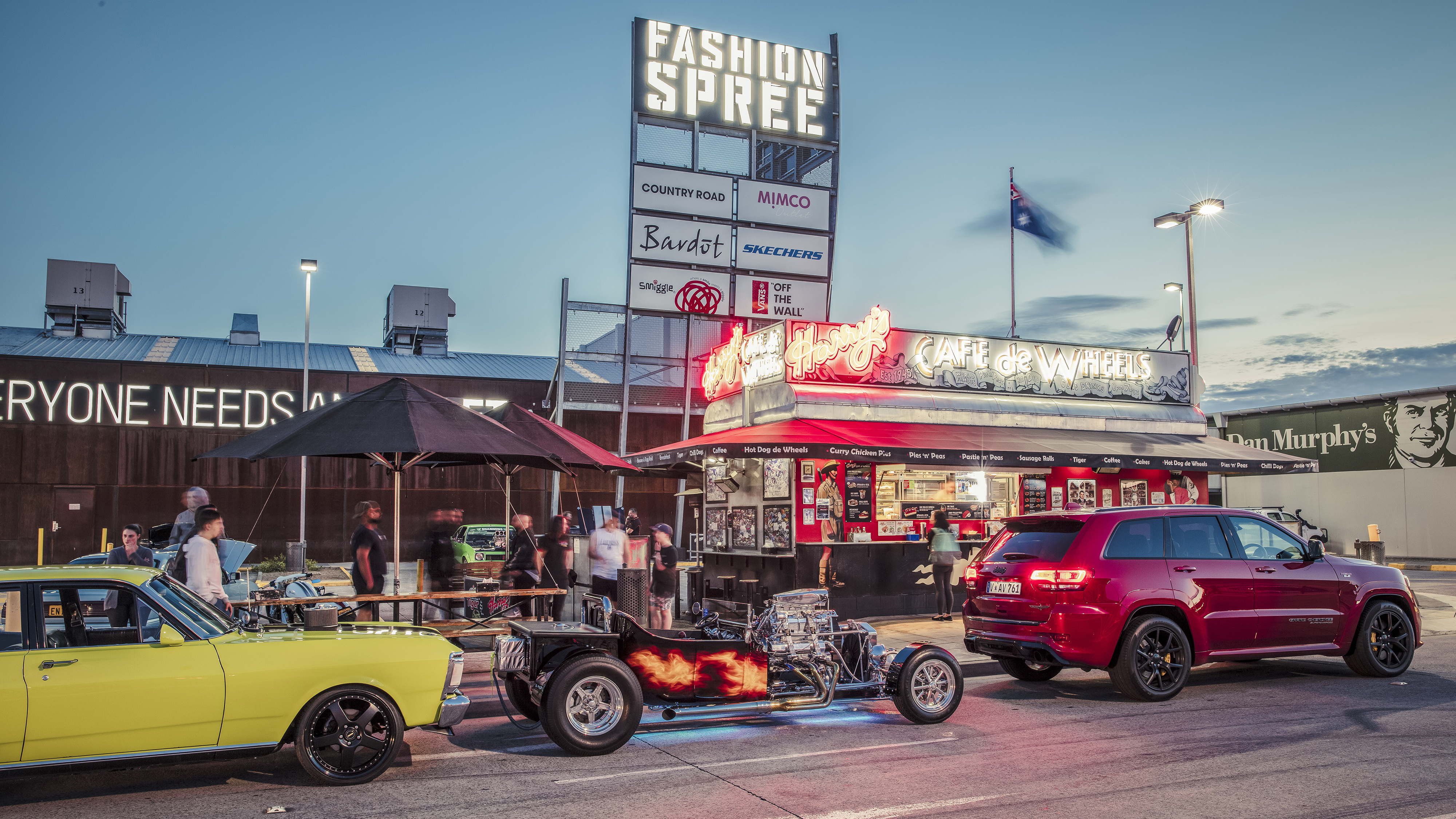 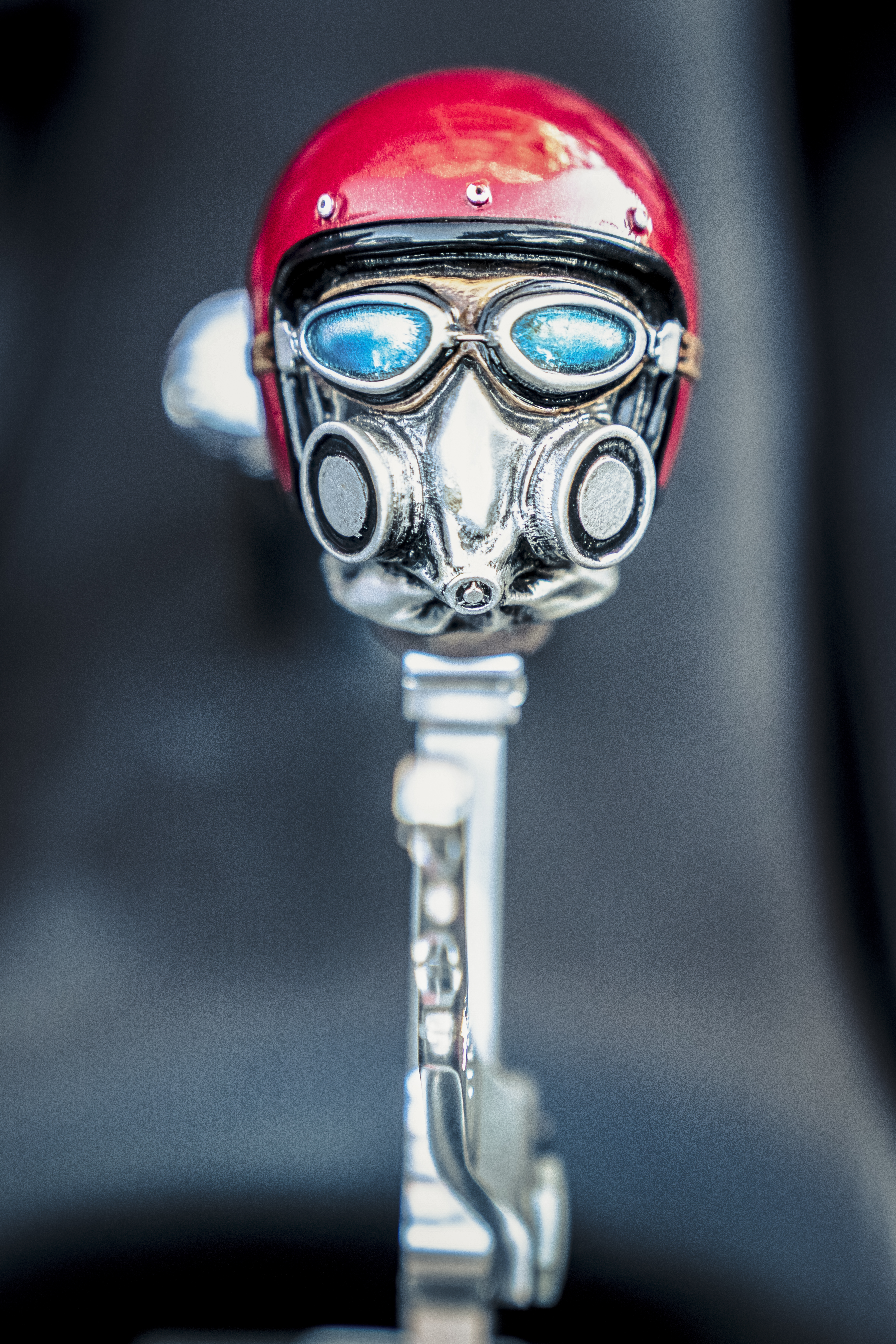 Hungry and desperate to clear the remnants of tyre rubber from my tear ducts, myself and photographer Easton grab some dinner. Luckily, if you’re in Sydney, this means that the immersion into car culture doesn’t need to stop – you just go to Harry’s Café de Wheels.

Set up in the late 1930s, these world-renowned pie and hotdog stands have served everyone from Richard Branson to Elton John. They’re worth a visit just for the signature ‘Tiger’ pie (delicious meat wrapped in fluffy pastry with mashed potato, mushy peas and gravy on top) but Harry’s in Liverpool, West Sydney, also acts as some sort of epicentre for petrolhedonism.

Even on a cold Wednesday night, the car park is full of cars and owners incontinent with creativity. In minutes the Trackhawk is sandwiched by a diverse spread of cars. At one end, ‘Rat Piss’ – a 1948 rat rod Chevy Maple Leaf truck that was pulled out of a shed and put together by its owner Jeff and his daughter. It’s now his daily. Next, a 1923 Model T – effectively a V8 attached to a bucket. “It’s pretty wild,” Tony, the owner says. Weighing only 890kg but having 600bhp, I don’t doubt him.

Then there’s the one-off 1975 Toyota Celica GT, aka the ‘Japanese Mustang’. The owner has had it since new but where a 1.6-litre, 90bhp four-cylinder used to live now sits an 840bhp, tri-fuel Ford V8 running off race fuel, LPG and nitrous. Finally, the pièce de résistance: the Lebanese Harleys. With both owners and bikes dripping in precious metals, it’s not hard to see why Australia’s gold rush has ended. Finished with 26in front wheels, 305-section rears, turbos good for 200bhp and £80k sunk into them, they’re works of art. And highly illegal. “But it’s a passion, bro,” their cagey owners say, “so worth the risk.” But there is somewhere where everything I’ve seen today is legal… 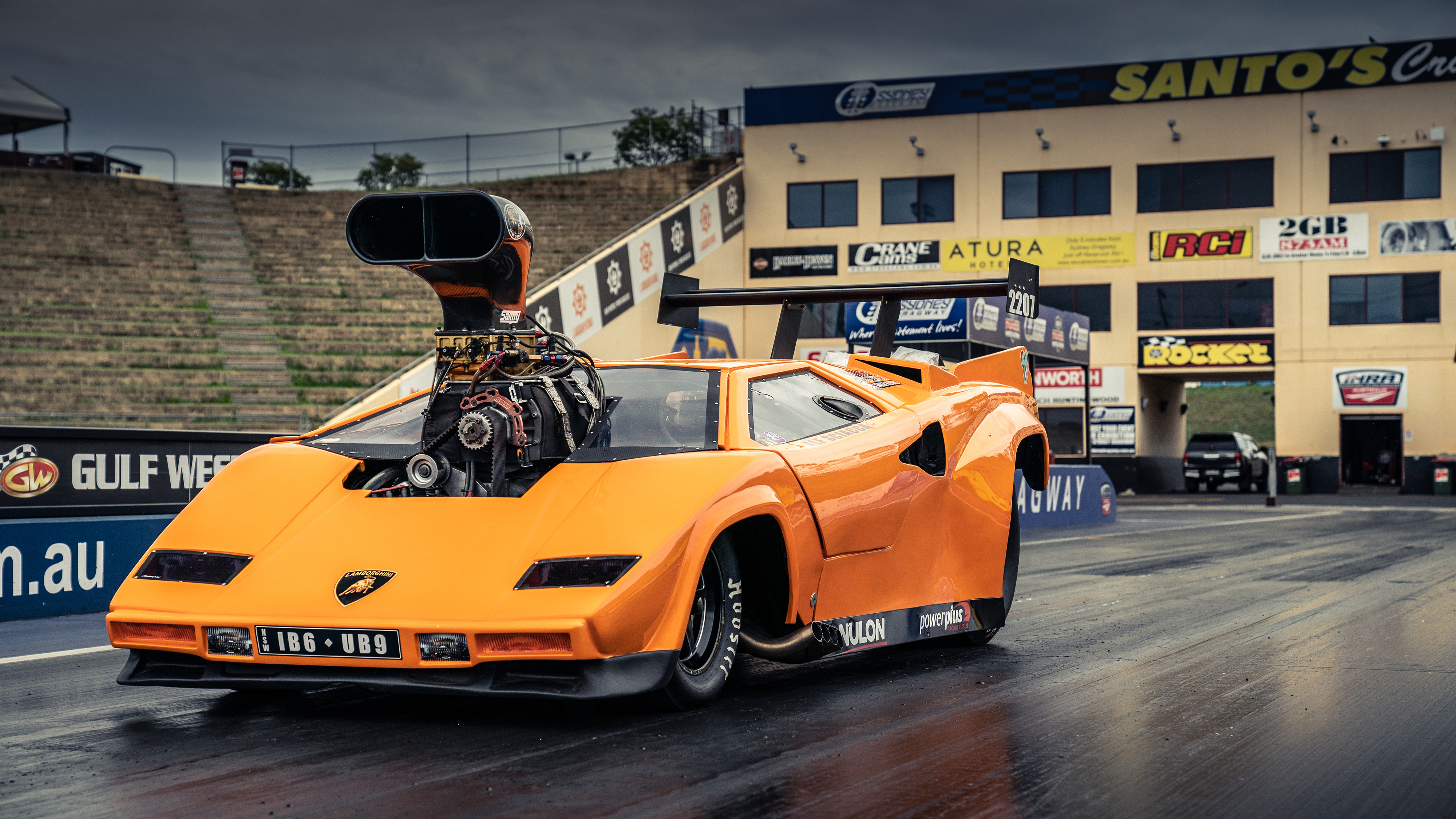 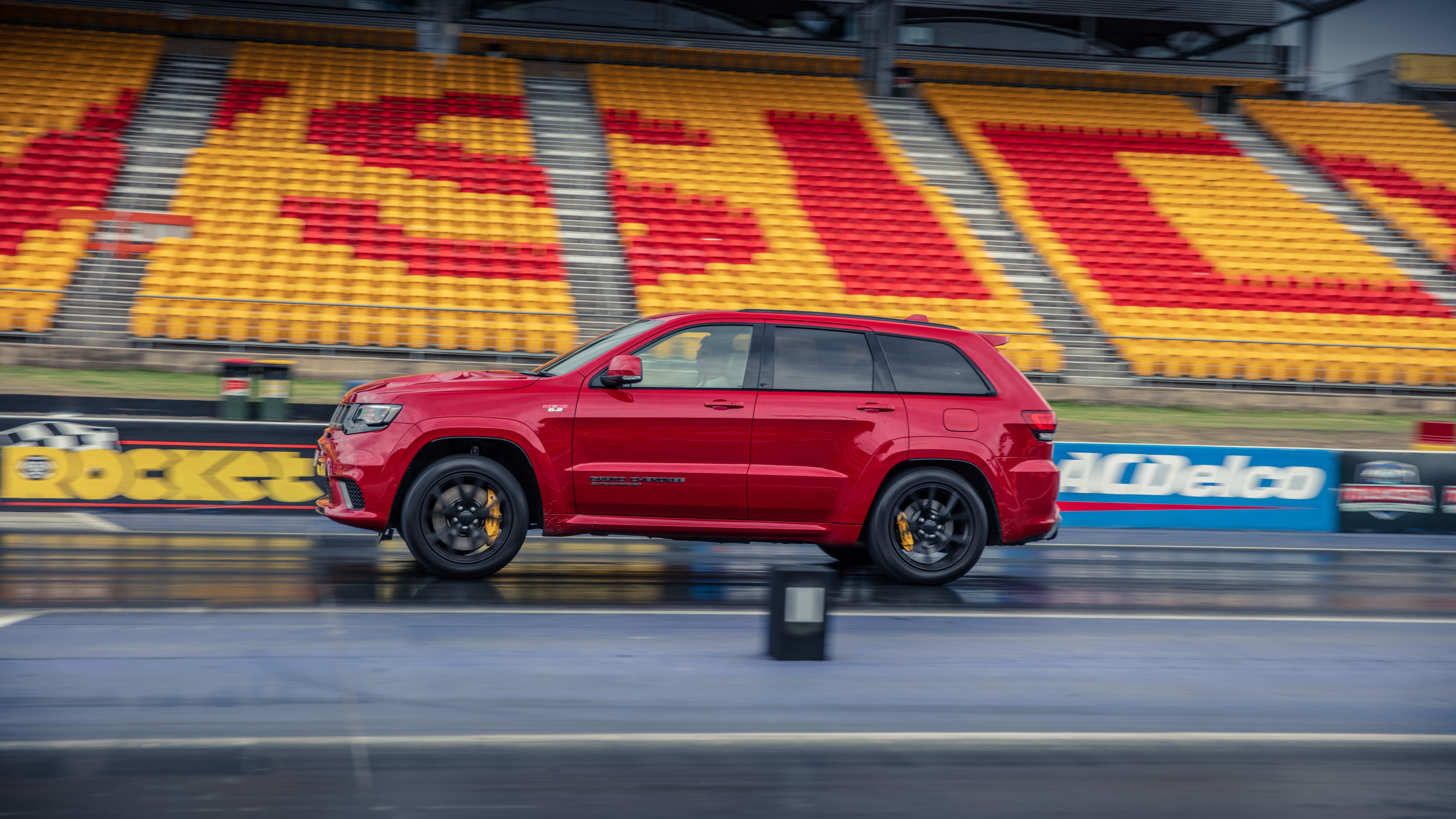 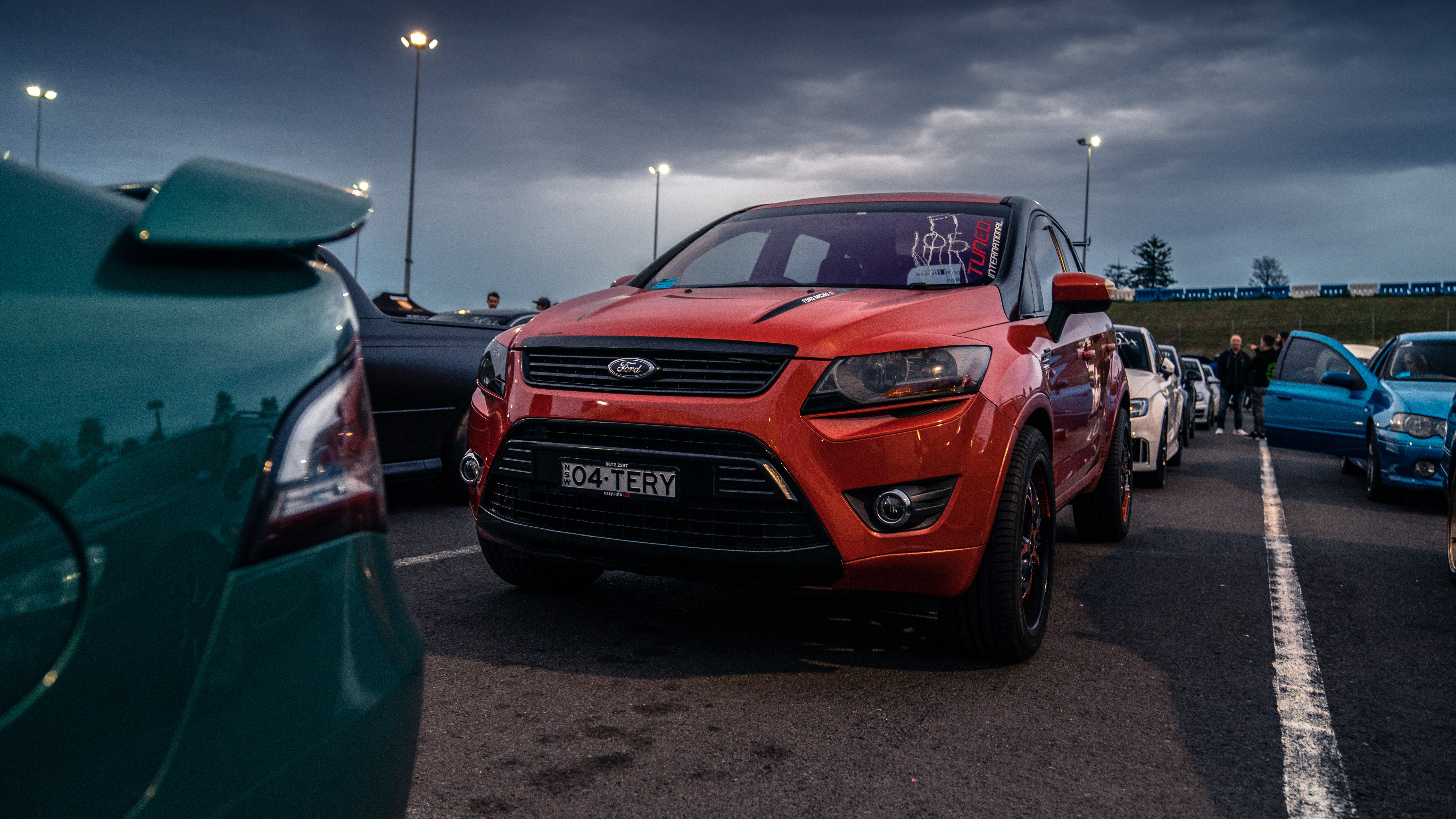 A few hours ago, I was saying the last rites to the roof of my mouth as I bit through a meat pie. Now I’m in a lose-lose drag race. To my left, Alf Sciacca’s 2,000bhp Lamborghini-bodied drag car and an engine so imposing it could swallow a small child. SRT’s launch control activated, the Jeep’s 400mm Brembo stoppers are trying its best to restrain the SUV as I mash both pedals at the same time. As Alf revs up, I tear up. Not because I know I’m going to lose, but because his race fuel is seeping through the Jeep’s air vents. Luckily, mother nature saves my embarrassment as before the Christmas tree lights go out, rain stops play. Phew.

Even so, every Wednesday night Sydney Motorsport Park hosts the most eclectic grassroots drag and burnout event I’ve ever seen. Week in, week out, hundreds of cars rock up, including everyone we’ve met today. Every kind of car imaginable is here; euro, muscle, JDM, race cars, old, new. There’s also a refreshing youth community, and it’s somewhat agnostic as the sticky tarmac is where everyone comes – boy or girl – to flex their egos, fight for valour, release their stress and get away from the anxiety of the obsessive nanny state they keep banging on about.

With the death of the car industry, you’d think that Australia would be in some maudlin no man’s land. And yes, people are angry and upset. But it’s edifying and inspiring to see such passion when it comes to cars. It’s old-school, raw and flowing down to the next generation. There’s also something quite romantically punk about the whole thing. Australian cars may be gone, but they’re definitely not forgotten. 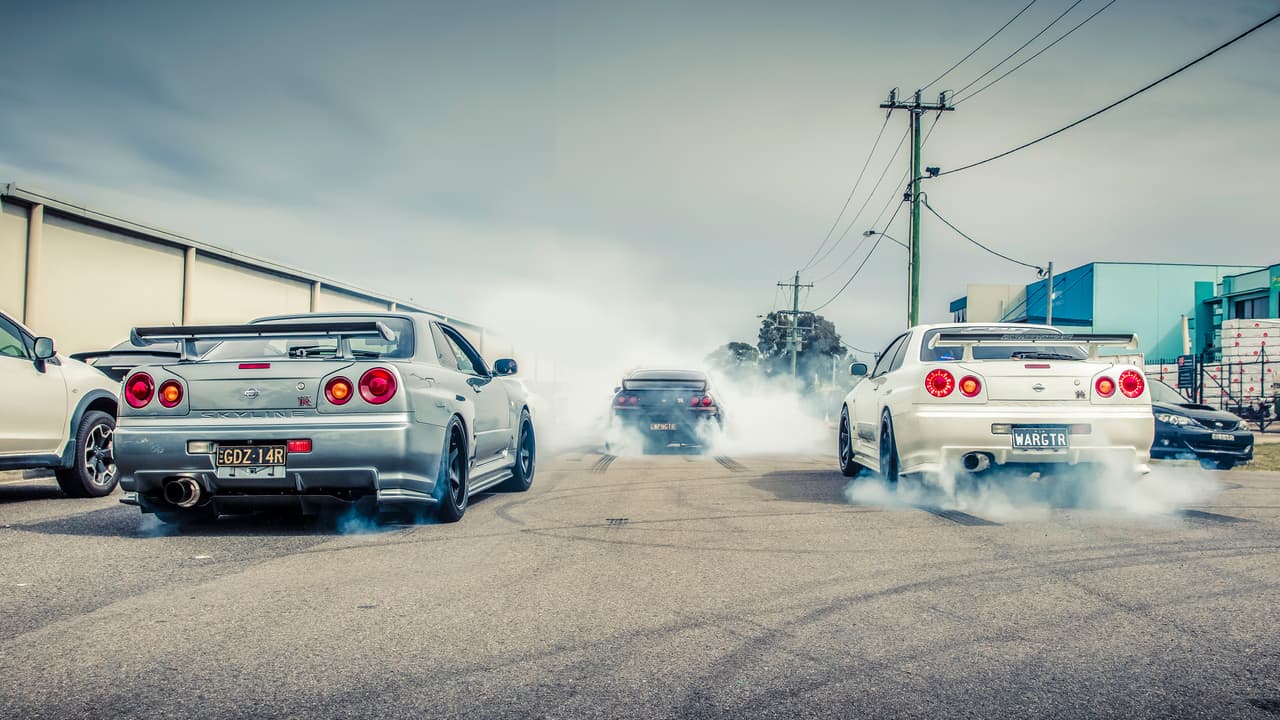