Four years ago, Hyundai's engineers made the FWD hot hatch BMW never dared. Now it has a closely aligned rival. Guess where from...

How many BMW 128tis have you seen out and about? I’m not sure I’ve seen a single one away from the glare of a photographer’s lens, and that’s a shame. While its £350 a month lease price looks awfully tempting, almost three quarters of fast 1 Series buyers nudge their budget up to £400 to snare the more powerful, 4WD and – perhaps crucially – M-badged M135i, objectively the hottest One.

Just not the most fun. BMW’s more fastidious/less sociable engineers did a bit of a skunkworks job when everyone else was on a coffee break, stripping out its flabbiest bits and producing the first front-driven performance car in the company’s history in the lighter, leaner 128ti. Whatever the heck its badge means nowadays is almost beside the point – here was a contradiction of much of the M135i’s marketing material, wearing gaudy red graphics to make sure everyone took notice.

It was enough to whip the latest VW Golf GTI into shape when we compared the two, with the Ford Focus ST a poor bystander to the brawl. But there was a notable absentee that day, a car stuck in the middle of a supply issue as facelifted cars were delayed into showrooms. Used examples of the Hyundai i30N – the everyday hot hatchback hero of recent history – still command as-new prices at three or four years old.

But the updated version is here, ready to give the 128ti a much trickier hurdle to leap over. On the surface of it, Hyundai’s turned all the lights into LEDs, widened the bore of the exhaust tailpipes and stuck new forged alloy wheels on the options list. Neat aesthetic upgrades they are, too. Beneath it all is a proper job, though, with numerous mechanical tweaks, the option of a new eight-speed twin-clutch automatic chief among them. 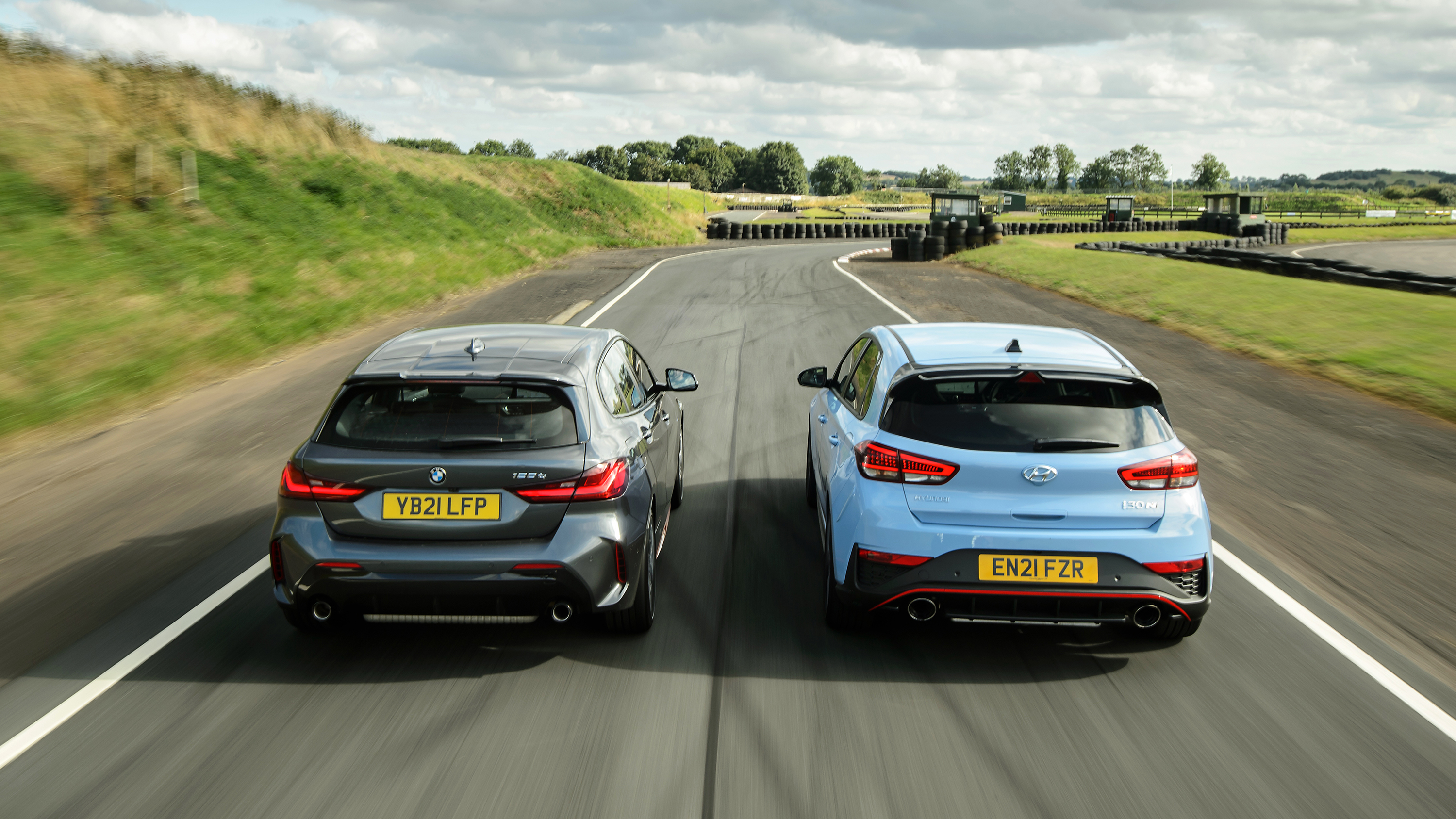 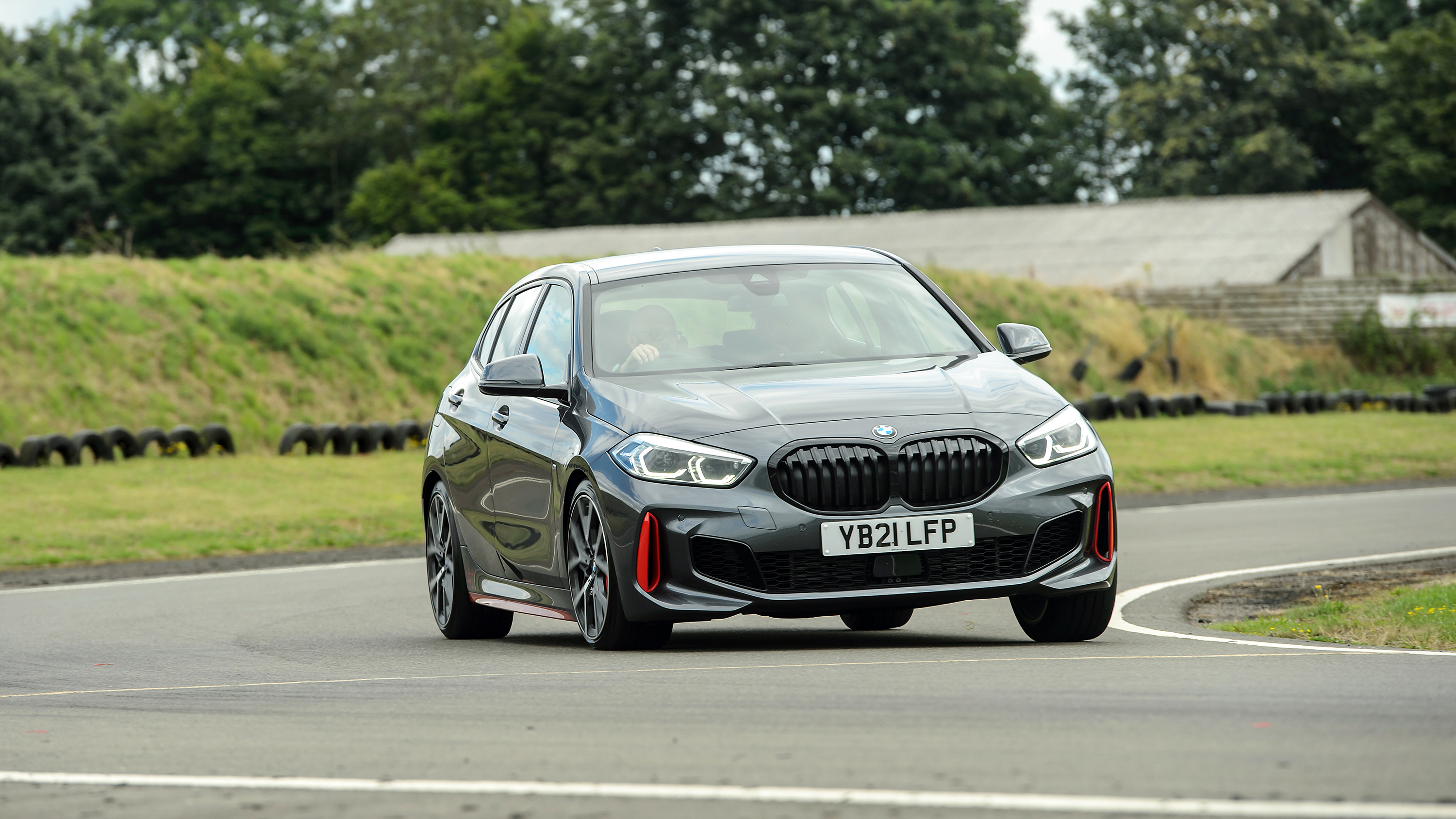 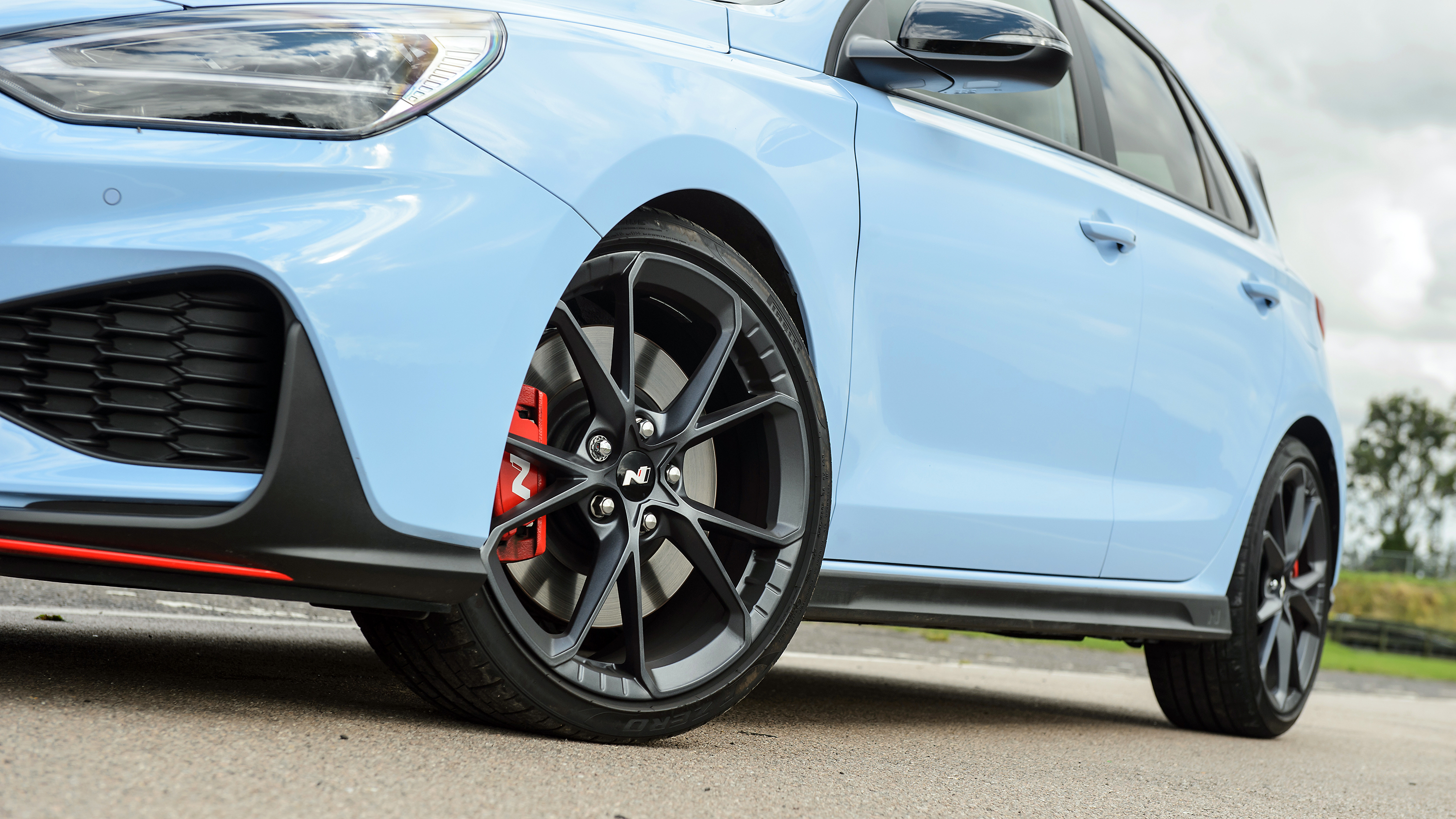 There’s an interesting narrative here. This particular Hyundai feels so flipping good because N division nicked half its staff from M division. It was the FWD hot hatch BMW never dared make – and just as its mid-life update arrives, so has a rival from Munich with all but identical on-paper stats. Do we have the i30N’s existence to thank for the 128ti’s? Funnier things have happened.

I’ll start by saying the i30N’s new DCT gearbox is good. Left in Drive it’s so smart and intuitive that it seems to change up or down right as my finger ends are tingling as if ready to tug its paddles. In Manual the shifts are instant and whip-crack like a Porsche PDK’s, with a naughty blare of revs on the way down the ‘box. Just with naff plastic paddles that are damped miserably.

Much like the BMW, the paddles are an afterthought – or perhaps just made appropriately to the budget of a £35k hatch where the likes of Alfa Romeo and McLaren have hiked my standards up unreasonably high. But when so much effort was traditionally put into making manual gear knobs a design feature – think GTI golf balls and the illuminated M stick-shifters – and it’s hard not to conclude that people pull their car’s paddles once on the way out of the showroom, then give up. Or that paddleshifters appeal to a crowd graduating from PlayStation sim wheels, thus materials familiar from a gaming accessory are no biggie.

But this is nit-picking, for the Hyundai remains a high watermark for sheer fun. It’s rougher edged, throatier, naughtier than the BMW – still wearing a sensible suit but telling lewder jokes. Its front end feels like its pivot point, incisively turning and gripping into a corner with the rear swinging round behind if you’re keen. It loves being braked deeply into a turn – there’s no crazy oversteer in the dry, but a delicious lightness to the rear axle to whip you round the corner.

"The N remains Quite Stiff in all three of its suspension settings, giving credence to the ti having just one... that’s also Quite Stiff"

Keeping your hands on the wheel of the DCT throughout this process has its own appeal, but this is a car where a manual feels more in tune with everything. This wasn’t a boisterously quick car when new, and nor is it four years on, even with a slight power advantage over the 128ti. ‘Fun over fast’ was always the i30’s game and staying manual also gives the i30N a £140 price advantage over the Bee-Em – add the DCT and it’s almost two grand more than the auto-only ti.

This is predominantly a road test of the two, but as the pictures betray, I also had a dozen laps of Shenington Kart Circuit. Y’know, for research purposes. Back on the public highway the N remains a car that’s Quite Stiff in all three of its suspension settings, giving credence to the ti having just one, that’s also Quite Stiff. The ti’s sole setup roughly equates to the N in its base Normal, with Sport and Sport+ cranking things up to a point you don’t strictly need (nor likely want) on road.

So the BMW is a slightly cooler, calmer customer. But it also has a conventional automatic gearbox that’s occasionally as hard to stir into a life as a hungover teenager, and if a moderately interesting road morphs all of a sudden into a very interesting road, you might squeeze five panicked tugs of the left paddle into the time it takes D to kickdown into second or third gear as you crave. There’s no spooky intuition as per the i30N’s ‘box, nor the quicker shifts of the Korean’s twin clutches.

Where the i30N has hundreds of combinations of its driving modes programmable to a Custom button, the 1 Series keeps things simpler. Engine, transmission and steering have two levels each and I suspect you’ll mostly leave it all in Comfort, as the car defaults to on start-up. Whichever way you go, the 128ti feels a touch clumsy around the kart track, its limited-slip differential taking a split-second too long working out its job so you leave corners in a scrabble of wheelspin before it hooks up and goes.

The LSD is a tangible and important part of the i30N experience, whereas here it’s more subtly integrated – oiling the cogs rather than feeling like one of the cogs itself. The BMW doesn’t loosen its tail hard on the brakes like the Hyundai, its driving experience much less slapstick and better served by smooth, considered inputs from its driver, not mischievous ham-fistedness. Learn its style and there’s satisfaction to be had but a circuit is not its playground – this is an easy-going everyday car with a tasteful sense of humour when coaxed. 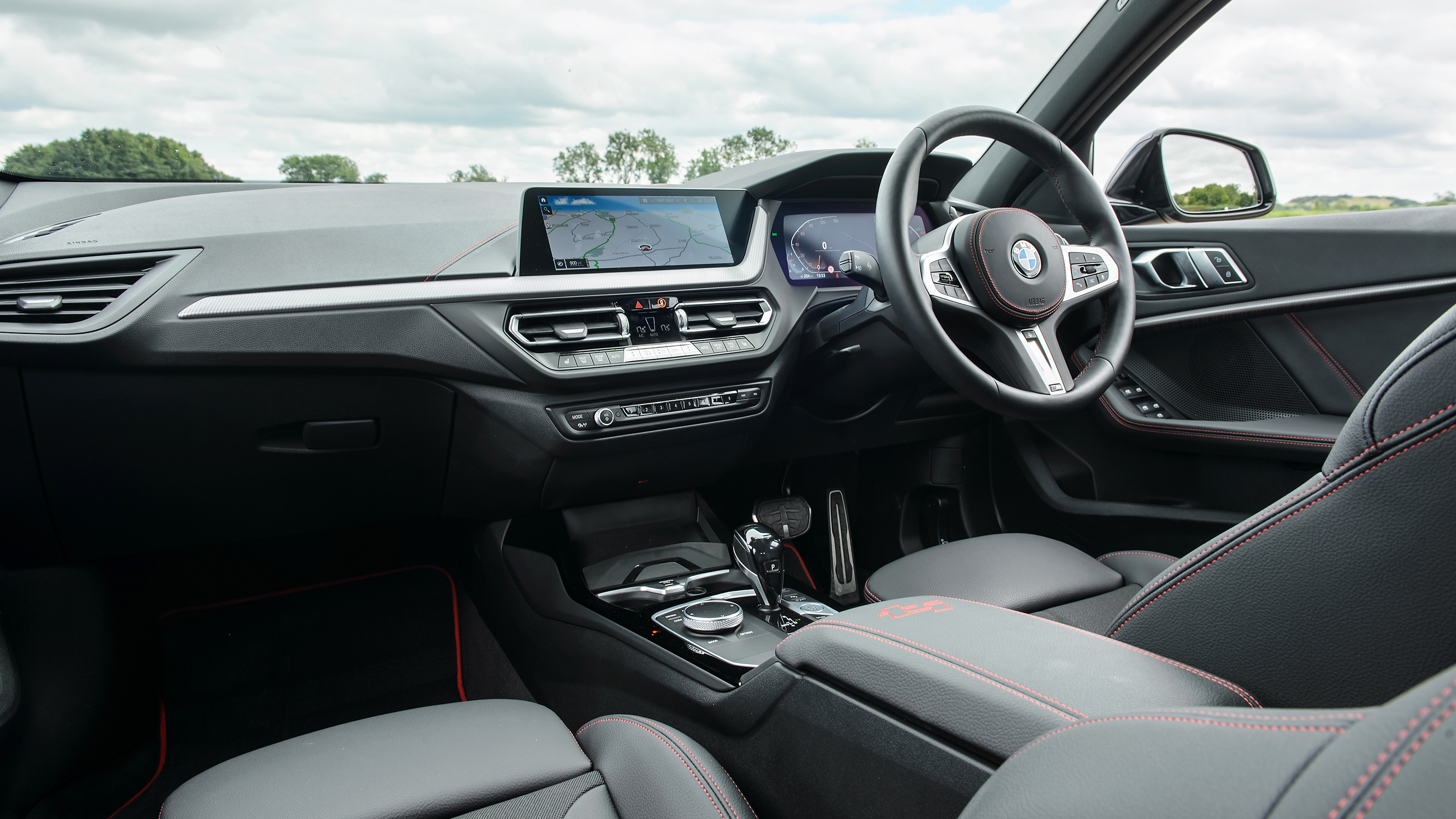 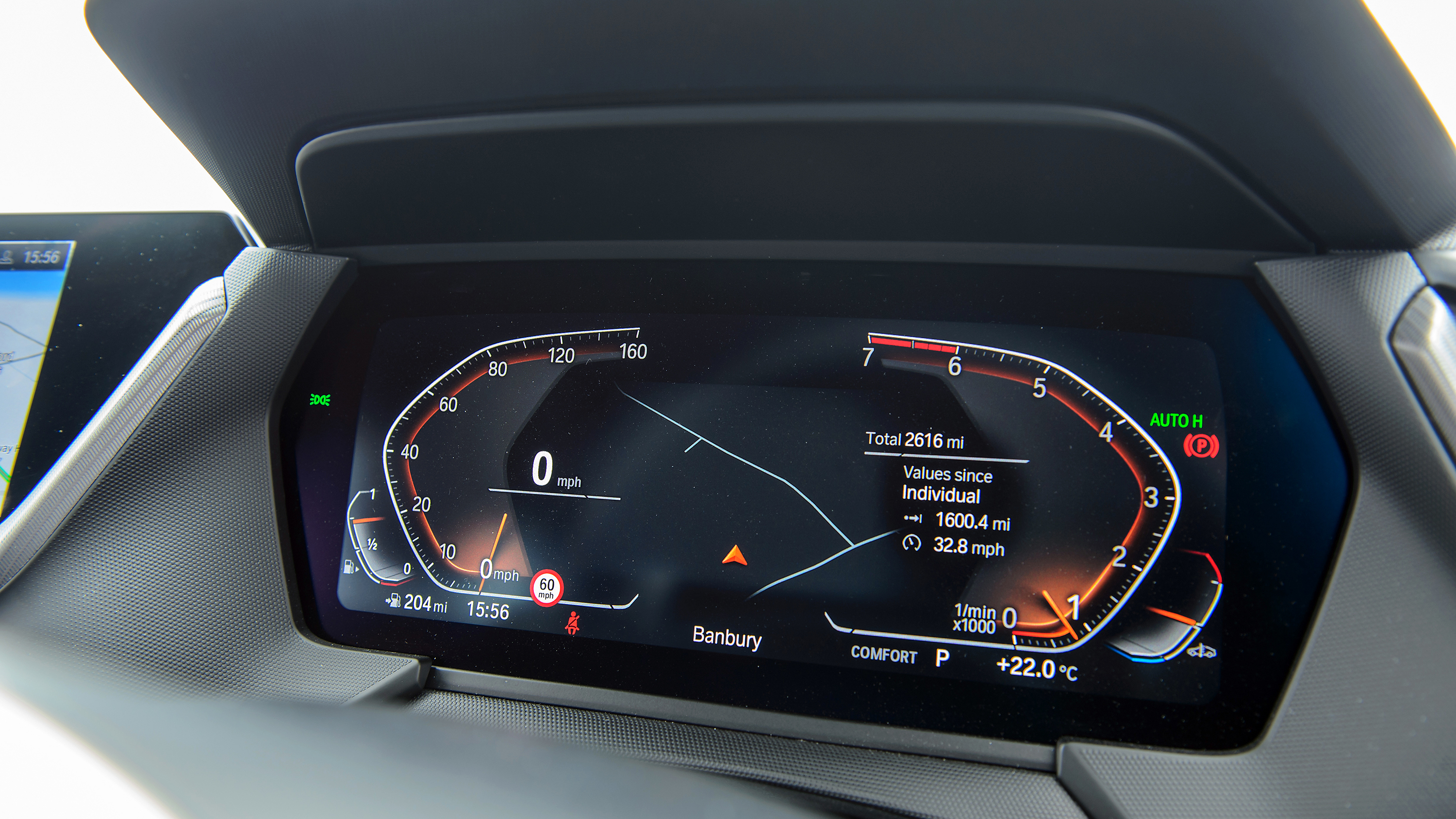 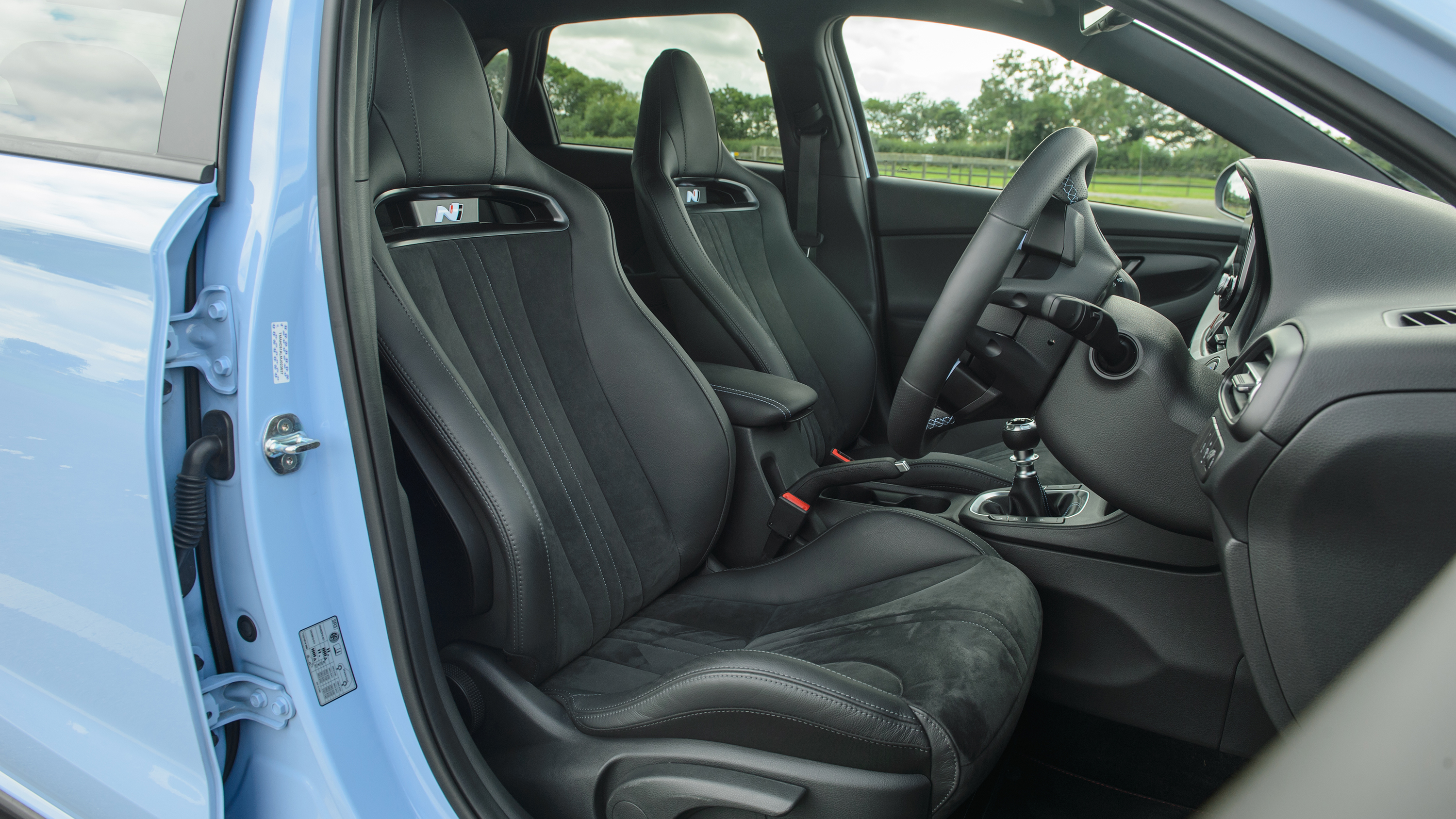 The BMW/Hyundai class divide swings further inside, where the 1 Series feels much techier, newer and just more sophisticated. So long as you’re resting your elbow on its striking red-stitched ti badge, which feels like an “oh crumbs, what if they forget which car they’ve bought?” marketing afterthought in an otherwise neatly designed cabin. It jars with the stripped-out simplicity the engineers deployed in all the areas we can’t see.

The Hyundai is hardly an unpleasant place to be in comparison, mind. The stark opposite is true if you’ve specced its brilliant new lightweight bucket seats, as shown here. The dashboard is a paragon of sensibleness, with rows of buttons where you want them and a fancy super-widescreen landed atop the dash like a UFO showing the rest of the switchgear a vision of another, more futuristic planet.

Its dials have remained analogue and are brilliant for it, but the fact newer N models have gone digital doesn’t suggest this is the engineers clinging doggedly to tradition. The manual handbrake does, though, and it immediately sets a naughtier vibe beside the ti.

What’s less welcome is the Hyundai’s old-school attitude to thirst. Hyundai claims mpg in the low 30s, but it’ll be more like mid 20s with even sporadic misbehaviour. I ran an i30N for close to a year and occasionally wondered if it’d sprang a small fuel leak, where you can reasonably expect the 128ti to regularly match – perhaps surpass – BMW’s 40mpg claims.

Sure, these are performance cars, but it’s fair to say this sort of thing is more prevalent in my head these days as the world is – quite clearly – burning. Super SUVs are a natural place to target our ire, but perhaps a hatchback that guzzles fuel with this kind of abandon is deserving of at least a slap on the wrist. Especially when BMW proves efficiency and performance can be amiable bedfellows, even in 6cyl sports cars.

It’s all leading us to a split verdict. For cars whose specs are achingly close on paper – and will basically command the same monthly lease payment – they behave quite differently in reality. The BMW is a paragon of sense, picking up the floundering Golf GTI’s baton and running with it. A slightly jiggly ride and those garish graphics will be minus points if you really want an undramatic daily driver, but I kinda like how both mark this out as Not Another Diesel.

The Hyundai has a massive warranty, every bit of equipment you could feasibly need and so much customisation you can make it three cars in one with the right Drive Mode button programming. It just comes with proper performance car downsides – chiefly insatiable thirst. Sense versus a little silliness, then. For now, I still favour the latter. The looser-hipped N nicks it. 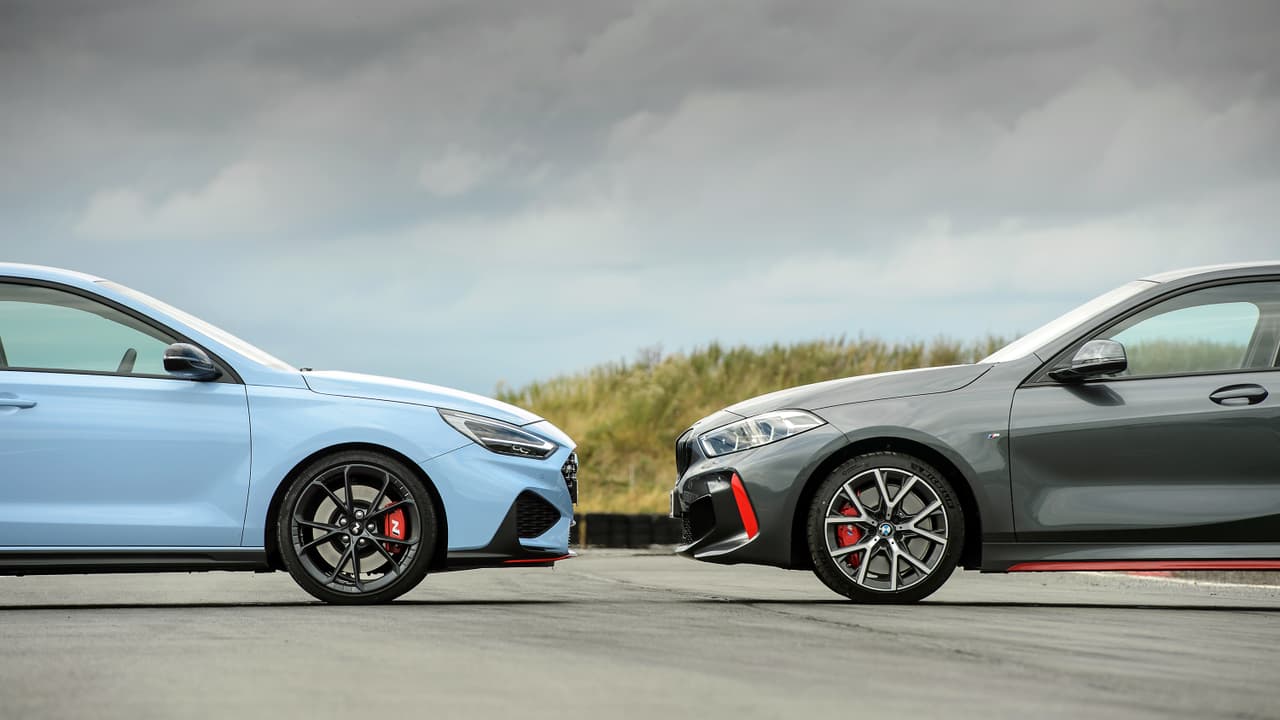