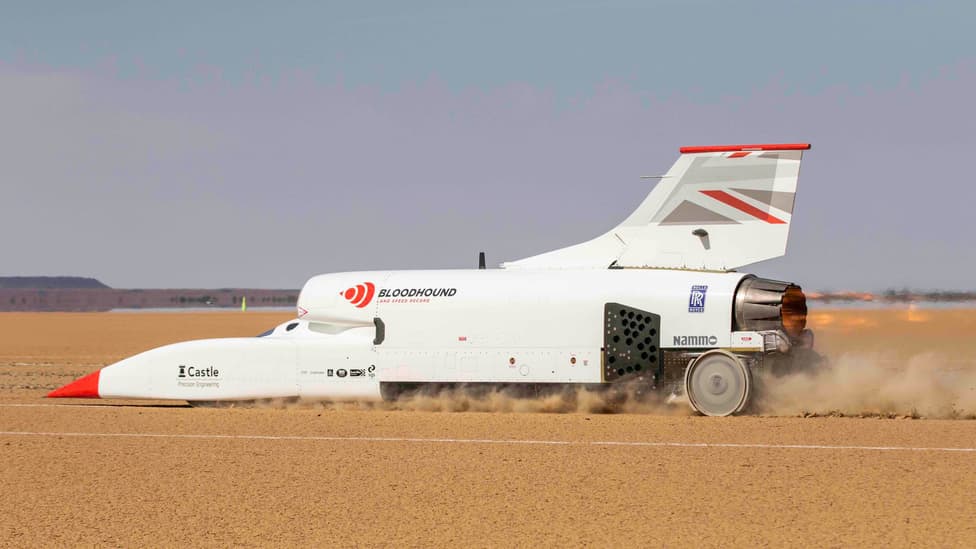 “At 200mph it’s like driving from snow on to ice, the car moves around and I’m throwing stabs of 90 degrees lock into it.” The words of driver Andy Green, fresh from sending Bloodhound LSR across South Africa’s Hakskeen Pan at 491mph.

Yesterday’s run was the fastest yet. Today (Wednesday) they’ve just hit 501mph. But these tests aren’t about beating the 763.035mph record. Not yet. This is more about slowing down.

For yesterday’s run they deployed one parachute. "With one it’s quite challenging. It was jumping around in the airflow, pulling the back of the car around, so I was busy with the steering to keep it pointing straight. Today we’re aiming to put two out, which should stabilise things. But we want to see what the differences actually are.”

Plain sailing? Not really. During the 491mph run Andy had to contend with his central data screen going blank at 390mph and ropey comms at the 16km mark, while inspection afterwards revealed minor bodywork damage, cancelling the planned second run.

“The CFD [computational fluid dynamics] done by Swansea University showed the streamlines of air coming off the front wheels, so we knew there might be an issue with the underside bodywork further back.” Dust and particles are hammering the bodywork and buckling a small steel plate metal. “We’ll be able to redesign the part back in the UK, but at the moment we’re patching it up for each run and seeing how well the modifications protect that area.”

As far as driving goes? “It seems to be a bit of handful in crosswinds,” says Green, “hence the steering inputs.” Opposite lock in a seven tonne car at 200mph? Different breed. Although Green does at least have previous – Thrust SSC famously oversteered at transonic speeds. God speed, Andy Green.