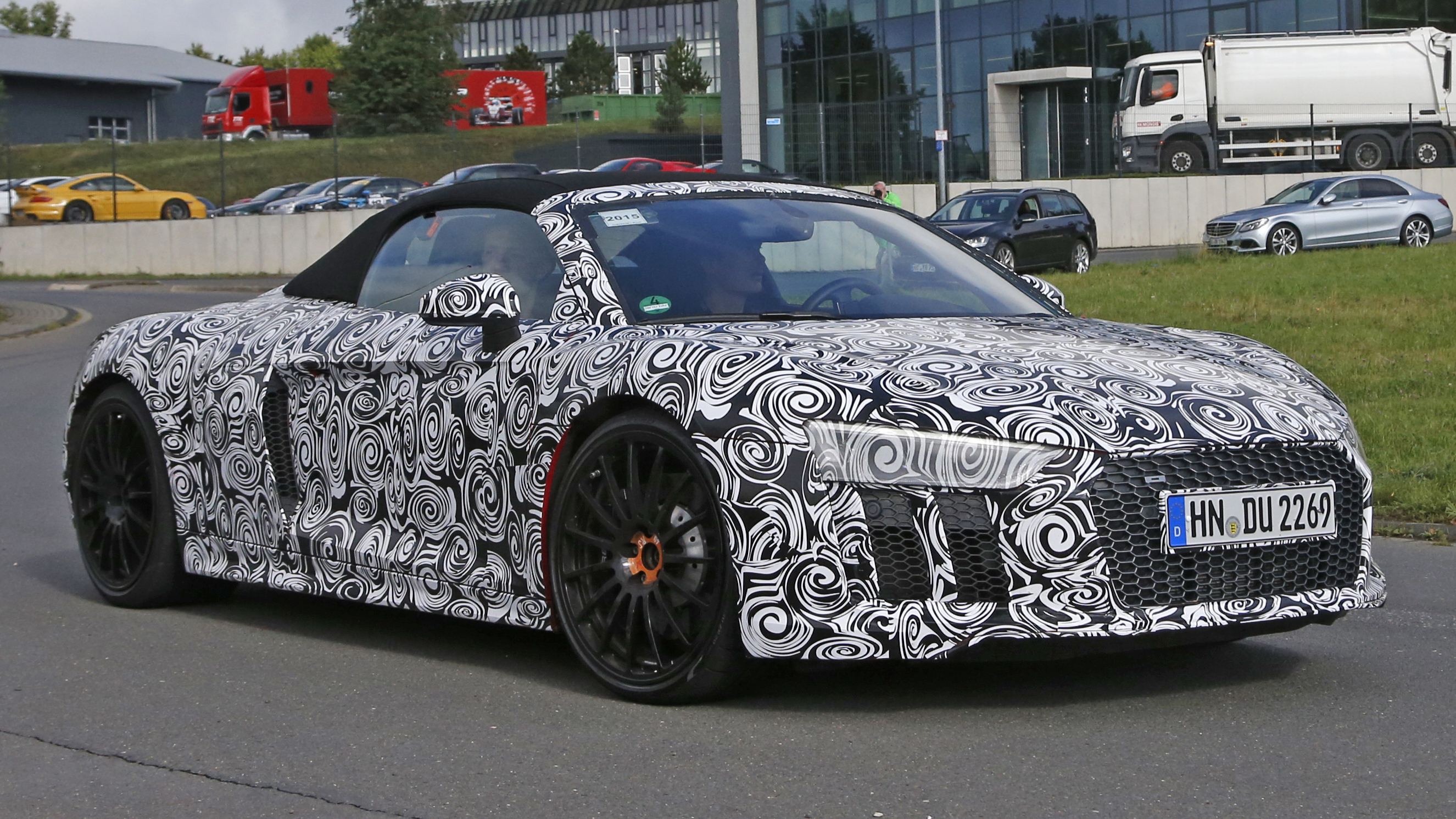 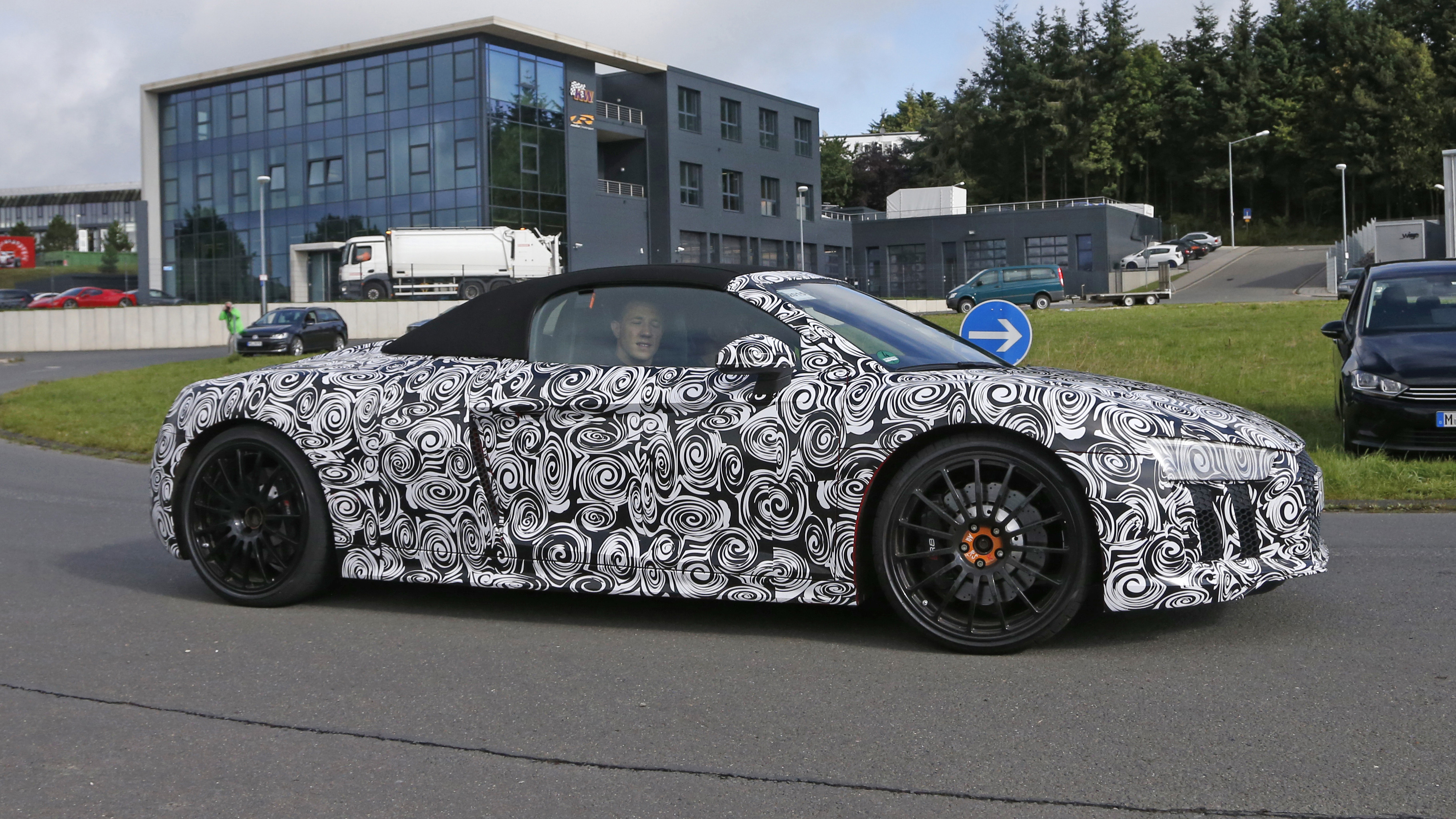 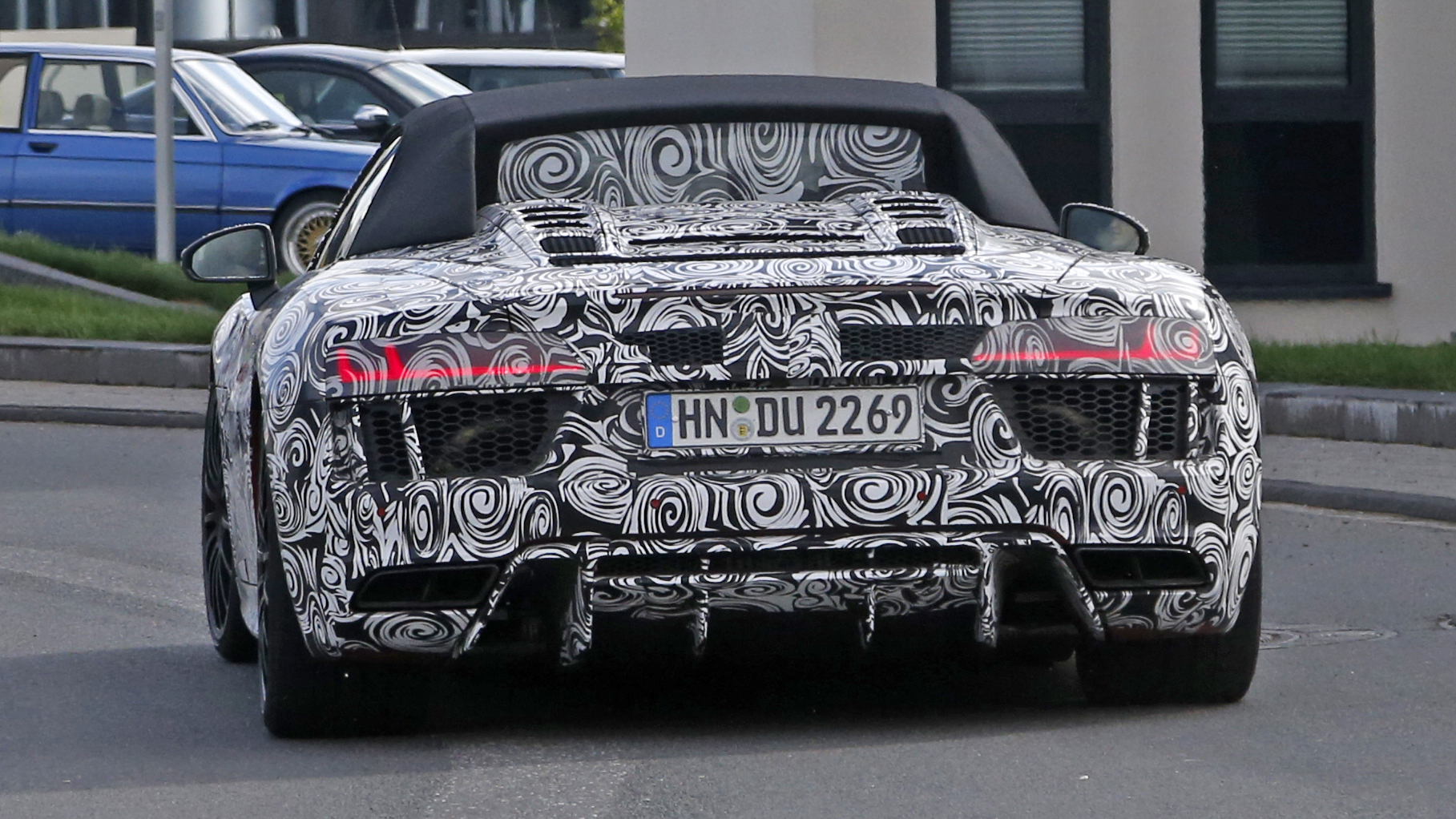 These pictures, taken by a man disguised as a bush, show a camouflaged, second-generation Audi R8 Spyder skulking around the Nurburgring.

And like the last R8, it appears Audi has plumped for a folding fabric roof, instead of the flip-back hard-top panel you’ll find on a Ferrari 488 Spider or a McLaren 650S Spider. Fine by us.

To accommodate the mass of material and the folding mechanism, Audi’s designers have redrawn the rear of the car. Gone is the Coupe’s glass engine cover, and in its place a flatter rear deck punctured with vents to provide extra cooling to the V10 beneath.

Between the two fabric flying buttresses is a vertical rear screen that you’ll be able to drop at the touch of a button, to treat your ears to some lovely naturally-aspirated music.

That’s right, Audi is expected to stick rigidly to the Coupe’s formula by offering just one engine – a non-turbocharged 5.2-litre V10 – but in two states of tune. Both will get a seven-speed double-clutch gearbox.

The base R8 Spyder will produce 532bhp, while the ‘Plus’ will get 602bhp and a face-distorting set of performance figures to match. The old V10 Spyder took 0.2 seconds longer than the Coupe to cover 0-62mph, so something in the region of 3.4 seconds for the ‘Plus’ is a reasonable bet this time around. Oh, and a top speed of 200mph-plus.

We suspect relatively little body strengthening will be required – you can thank the new R8's mid-engined, aluminium and carbon-fibre hybrid chassis it shares with the Lamborghini Huracan for that. It's already around 40 per cent stiffer than the old car, preserving most of the 50kg weight saving you get with the Coupe.

Throw in Audi’s redeveloped quattro system with an electro-hydraulic clutch on the front axle, a mechanical diff at the rear and the capacity to send up to 100 per cent of the torque to either end, and the real-world performance gap to the coupe should be wafer-thin.

With prices for the V10 Plus Coupe starting at £134,500, don’t expect much change from £150,000 for the top-spec Spyder. But you can sleep easy knowing it’ll be as real-world rapid as the forthcoming Lamborghini Huracan Spyder, but roughly £40,000 less.