Formula One: remember when… the US GP went ahead with just six cars? | Top Gear
Advertisement
Formula One

Formula One: remember when… the US GP went ahead with just six cars? 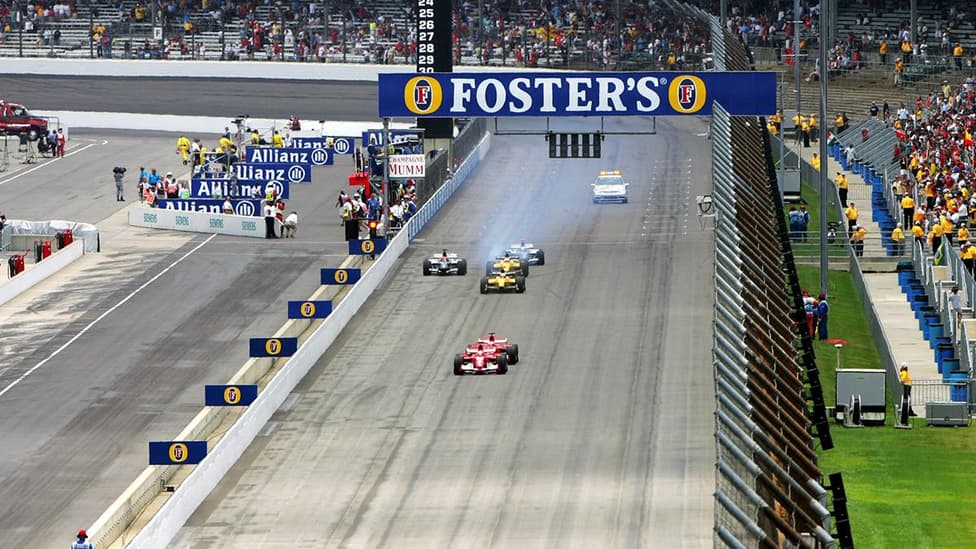 F1 has shot itself in the foot many times over the years, but the US Grand Prix at Indianapolis in 2005 was possibly the biggest PR disaster of them all.

After spending the weekend arguing about tyres, seven teams pitted at the end of the formation lap, leaving just six cars on track to contest what remains one of the most bizarre races ever. The fans were furious with the lack of action and the reputational damage contributed to the event being scrapped altogether two years later. Ouch.

So how did things go so badly wrong? Well, in 2005 F1’s tyre rules were very different: there were two suppliers - Bridgestone and Michelin - instead of one, and back then drivers could only use a single set of tyres for both qualifying and the race.

By and large the seven teams running Michelin’s rubber had the upper hand over the three using Bridgestone’s, as demonstrated by the top four constructors in the standings all running the former.

But in the second free practice session it became clear that Michelin had a problem: Toyota’s Ralf Schumacher had a massive shunt in the high-speed, banked turn 13 caused by a left-rear tyre failure, and the German was so badly hurt that he had to be replaced by test driver Ricardo Zonta for the rest of the weekend.

Michelin later worked out that its tyre couldn’t cope with the uniquely extreme forces of that corner, especially as the recently resurfaced track was tearing the rubber more than usual. The firm announced it could only guarantee safety for 10 laps; the grand prix would be 73 laps long. This, to put it mildly, was a problem.

And so began the mad scramble for a quick fix. The FIA suggested the Michelin teams should just drive more slowly, but this idea was rejected. A different spec tyre? None available. Scrap the one-tyre rule? 14 cars would need to do eight pit stops, and there simply weren’t enough tyres available at such short notice.

Eventually the teams asked if they could install a chicane at turn 13 to slow everyone down, and the argument got ugly. The FIA refused on the grounds that any changes to the track layout would make it impossible to guarantee safety, and they even threatened to pull all of their staff out of the circuit to stop the grand prix from happening. The teams briefly wondered if they could fill all the vacant jobs with their own personnel to run a non-championship race, but this was a non-starter.

With no compromise in sight, the Michelin teams were advised not to race. All of them lined up on the grid as required by the rules, tricking the spectators into thinking that all was well, but at the end of the formation lap everyone bar Ferrari, Jordan and Minardi went straight back to the pits.

The stunned crowd then watched as Michael Schumacher and Rubens Barrichello pulled away at the front, leaving the two remaining teams - which had locked out the back rows of the grid in qualifying - to fight it out for third place. In the end it was Jordan’s Tiago Monteiro who prevailed, becoming the first and so far only Portuguese driver to score an F1 podium.

Having qualified 17th Monteiro wasn’t going to let the situation stop him celebrating, but Schumacher and Barrichello declined to join him and quickly retreated from the podium to a chorus of boos. Never again, please.