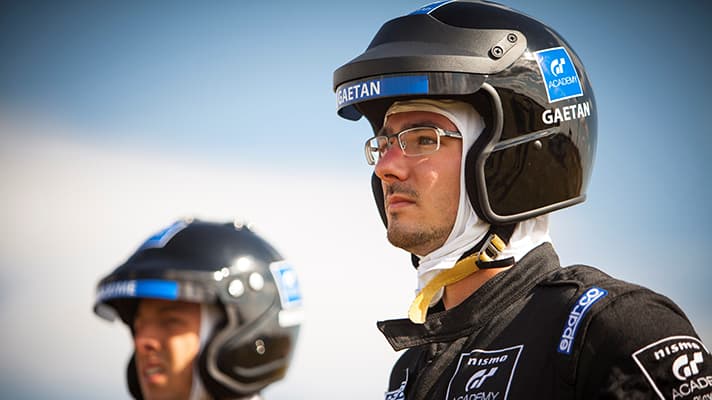 At Silverstone last week, Paletou joined 41 fellow competitors from 12 countries in the final Academy shoot-out, securing his place in the race team after impressing the judges in a number of challenges, including stock car racing in Micras, a fascinatingly ballsy overtaking test, and a dogfight around Silverstone's Stowe circuit in Nismo 370Zs. Couch spuds these guys are not.

TG.com watched a three-way shoot-out between the three last Brits standing, 22-year old Luke Wilkins, 26-year old Karl Chard, and 36-year old Alex Porazinski. The latter is an iron man regular, who'd made it through to the final stages on his fourth attempt.

‘I've been on the Mercedes F1 simulator,' he says, ‘and it was brilliant. But GT6 isn't that far away from it. Playing sims really can teach you racecraft. If you think about it, the three of us will have done thousands and thousands of racing laps over the years.'

Chard, meanwhile, apparently uttered the immortal words ‘I'm f***ing loving this!' in the middle of his ARDS test.

The UK finalists' mentor is pro racing driver and instructor Rob Barff, who is quick to extinguish any lingering cynicism about just how close gameplay is to the real deal.

‘Look, I've seen half-decent racing drivers who can't get into the top 400 of the GT6 gamers. These three are here because they're the Top Gun Mavericks of their world. They might start off at a relatively low level of driving and racing ability but the rate of progress is absolutely stellar.

‘Their brains can process new information incredibly quickly, and they learn fast. If I can tap into that rich seam, and help them improve, the sky's the limit. In fact, if it was between the naturally talented kid who doesn't play computer games versus the gamer, I'd put my money on the gamer.'

This year's winner Gaetan was mentored by French racing legend - and for once the word is fully justified - René Arnoux. Frankly, TG.com is pleased to have found someone older than we are amongst all this youthful exuberance.

He admits that it's a useful tool, though.

‘Playing GT6 is an excellent way to learn a circuit, but once you've done that there is no substitute for the real thing. It's about the high sensitivity between the track surface and the tyres. But also between your hands, your feet and your ass.'

René is also not a fan of the current hi-tech F1. Forget hybrid turbos and energy recuperation, he's not even in favour of pitwall-to-driver radio. ‘The driver should manage everything himself!'

Of course, the modern world does have some advantages. For example, the internet has rescued great racing escapades from the dusty VHS of memory.

Take a few moments to watch René's titantic battle with the late, great Gilles Villeneuve in the 1979 French Grand Prix, here - it'll set your week up a treat. When I mention it, the smile widens.

‘Not a week goes by without someone talking to me about that race,' he says. ‘Last week I was in Paris, and a guy started asking me about it. He was only 22, but he had watched it over and over. It's fantastic, of course, but really, if people are still like that about a race that happened 35 years ago, you know F1 has a problem.'