Could a road car ever beat an F1 car? | Top Gear
Advertisement
Motorsport

Could a road car ever beat an F1 car? 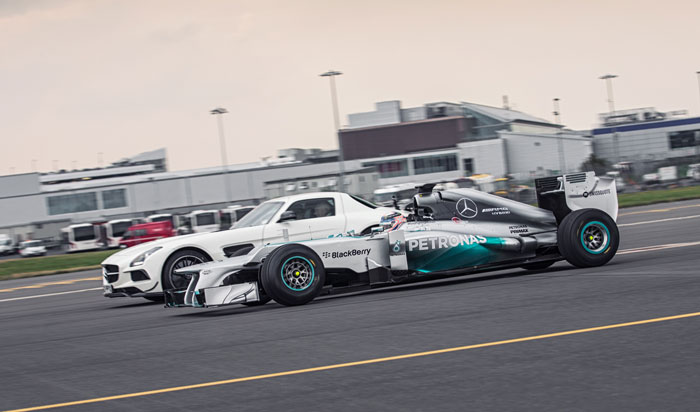 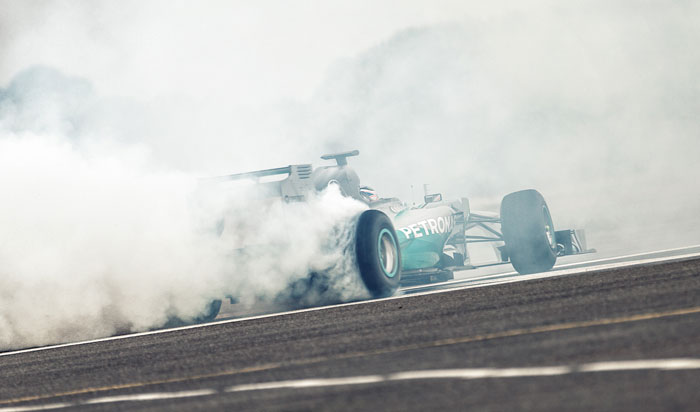 As we've discovered time and time again, so removed are Formula One cars from what you and I drive everyday, the task of piloting one - even slowly - is best left to someone who's generally less rubbish than TG.

Raikkonen's 2012 Lotus E20 made TG magazine's Dan Read cry. And Hammond drove so slowly when he had a go in Alonso's ‘05 Renault R25, he had to be called into the pits so the team could reheat the tyres. And the brakes.

What you don't see too often is a Formula One car pitted against something with a set of number plates. And when you do, the F1 car usually wins by so vast a margin that the driver has had time to don a branded tee, put on his free watch and polish his silverware before the other car crosses the line.

But last week, Mercedes invited TG.com to Race the Runway - a yearly get-together on the auxiliary runway at Edinburgh Airport. For a £300 donation to the Prince and Princess of Wales Hospice, owners of, well...anything, could rock up and blast down the mile-long runway at full-chat.

There was a pair of Aventadors, a McLaren 650S Spider, a 458 Spider, loads of 911s and just as many GTRs. Oddball entrants included a Tesla, a gorgeous Ferrari 328 GTS and a TVR Tuscan. Oh yeah, and a 2012 Mercedes AMG F1W03 once raced by none other than Michael Schumacher...

That's right, the seven-time F1 World Champion (and our thoughts remain with Michael and his family). This particular chassis raced in the German, Hungarian, Belgian, Italian and Singaporean rounds of the 2012 F1 World Championship, and on the day was driven by Sky TV presenter and Merc' development driver Anthony Davidson.

First, the least surprising news ever. The F1W03 beat everything it went up against by at least two seconds - which in the world of F1 is roughly equivalent to a week - even though it was only geared to reach a paltry 195mph.

First, it dispatched an A45 AMG - sticking with it until 100mph before screaming its way to the end of the strip as fast as its exhibition spec' tyres would allow. Then an SL63. Then an SLS Black Series, and finally, a McLaren 650S driven by former WRC driver Robbie Head.

It was the F1W's race with the 650S - the quickest road-car of the day - that got us thinking. Davidson claims the McLaren jumped the gun by at least two seconds - by which time it was likely doing something like 45mph. But this was no problem for Davidson, who duly waited for the green light and quickly overhauled the McLaren, making for a deeply unsurprising result. The F1 car covered the 1500m course in 21.23 seconds, to Head's 23.47.

But this is where it got interesting.

Thanks to the FIA, Davidson was hampered by the exhibition spec tyres he was forced to use. The team revealed to TG.com that these tyres - which look like standard racing wets - are closer in compound terms to a conventional road tyre. Good for doughnuts, but less effective for track work than proper slicks.

Quick, then, but maybe not as quick as you might expect. No doubt an F1 car is faster around a circuit, but are we fast approaching the day when a seriously quick road car can overhaul an F1 car in a straight line? Take the LaFerrari, for example. Ferrari says it'll accelerate from 0-186mph in 15 seconds. That's just 0.1 seconds slower than Davidson managed in his 600kg, 750bhp V8 F1 car. And the P1 and 918 aren't too far behind.

Then there's the soon-to-be replaced Hennessey Venom, which holds the Guinness World Record for the quickest sprint to 186mph - 13.63 seconds. 1.3 seconds quicker than the F1 car.

We know the F1W could have gone faster - there are simply far too many variables for Davidson's runs to have been representative of the FW's true pace. With Monza spec gearing, racing slicks and functioning KERS, it may well have beat the Venom's time. But by how much?

The fact remains - with Formula One cars getting slower and slower, and road cars ever-quicker, it may not be long before there is a road car that, in perfect conditions, could give an F1 car a run for its money.

So, what do you think TG.commers? Will we ever see a road-car get anywhere near an F1 racer in a straight line? Answers on a postcard, please...