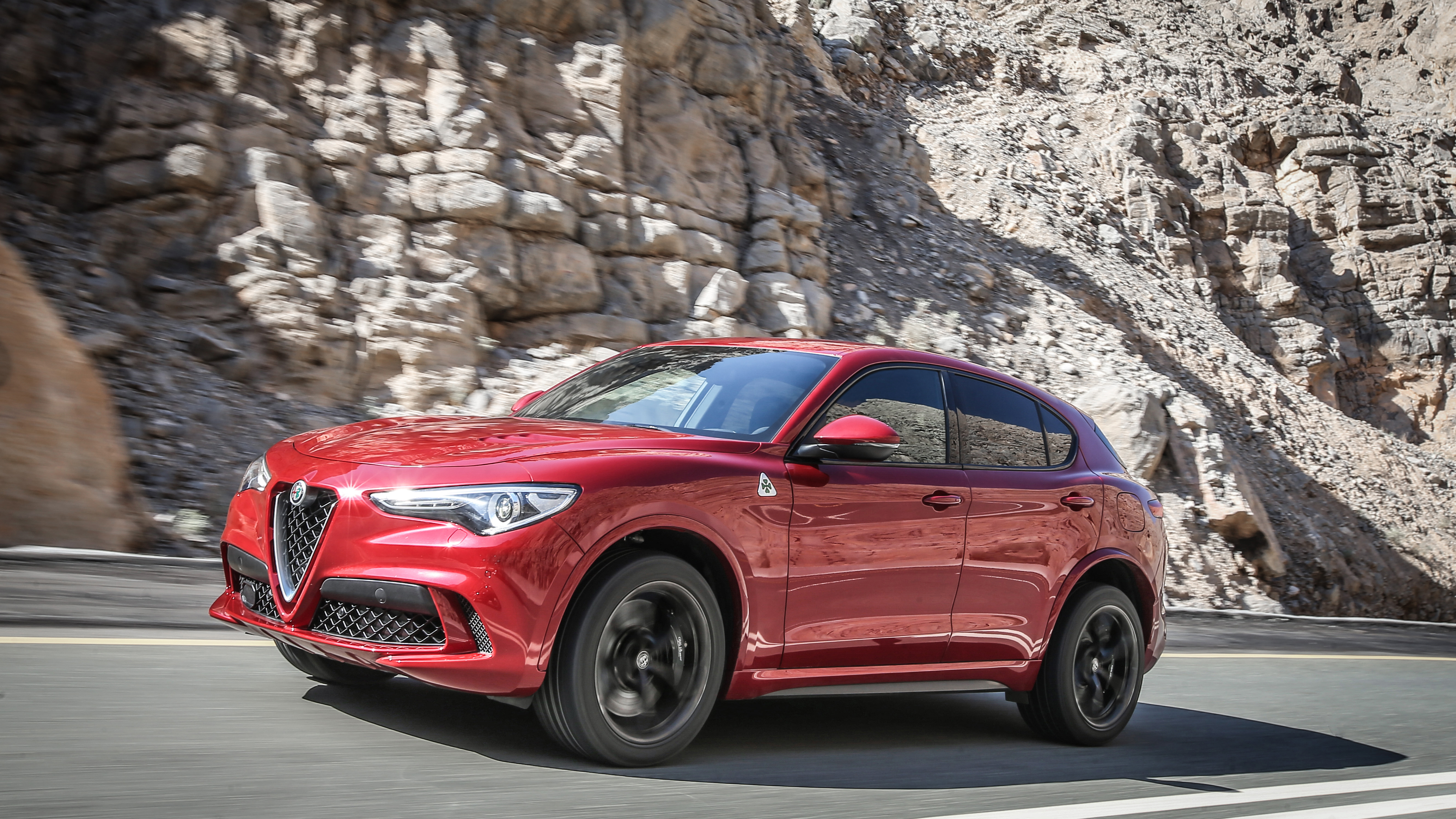 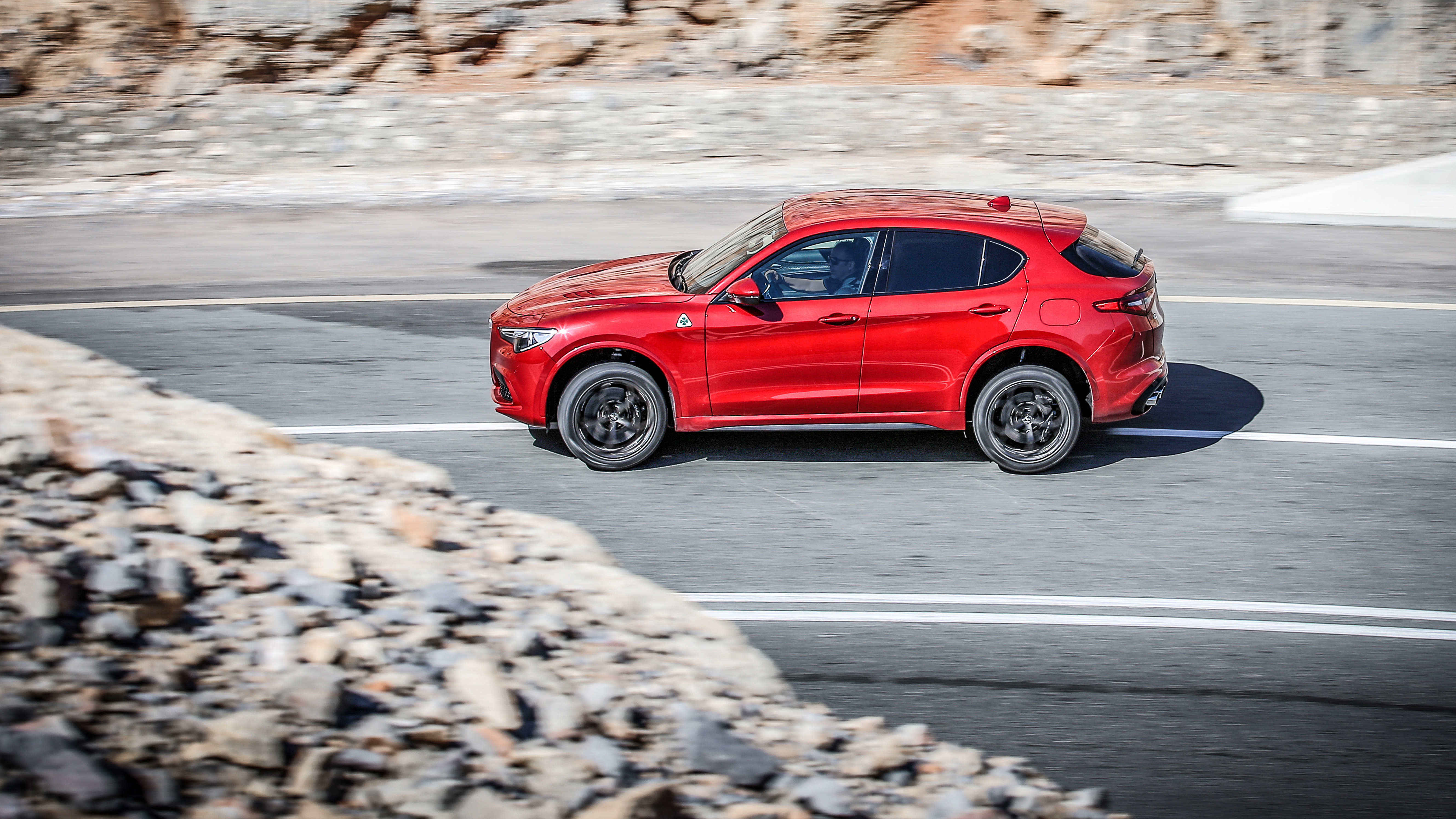 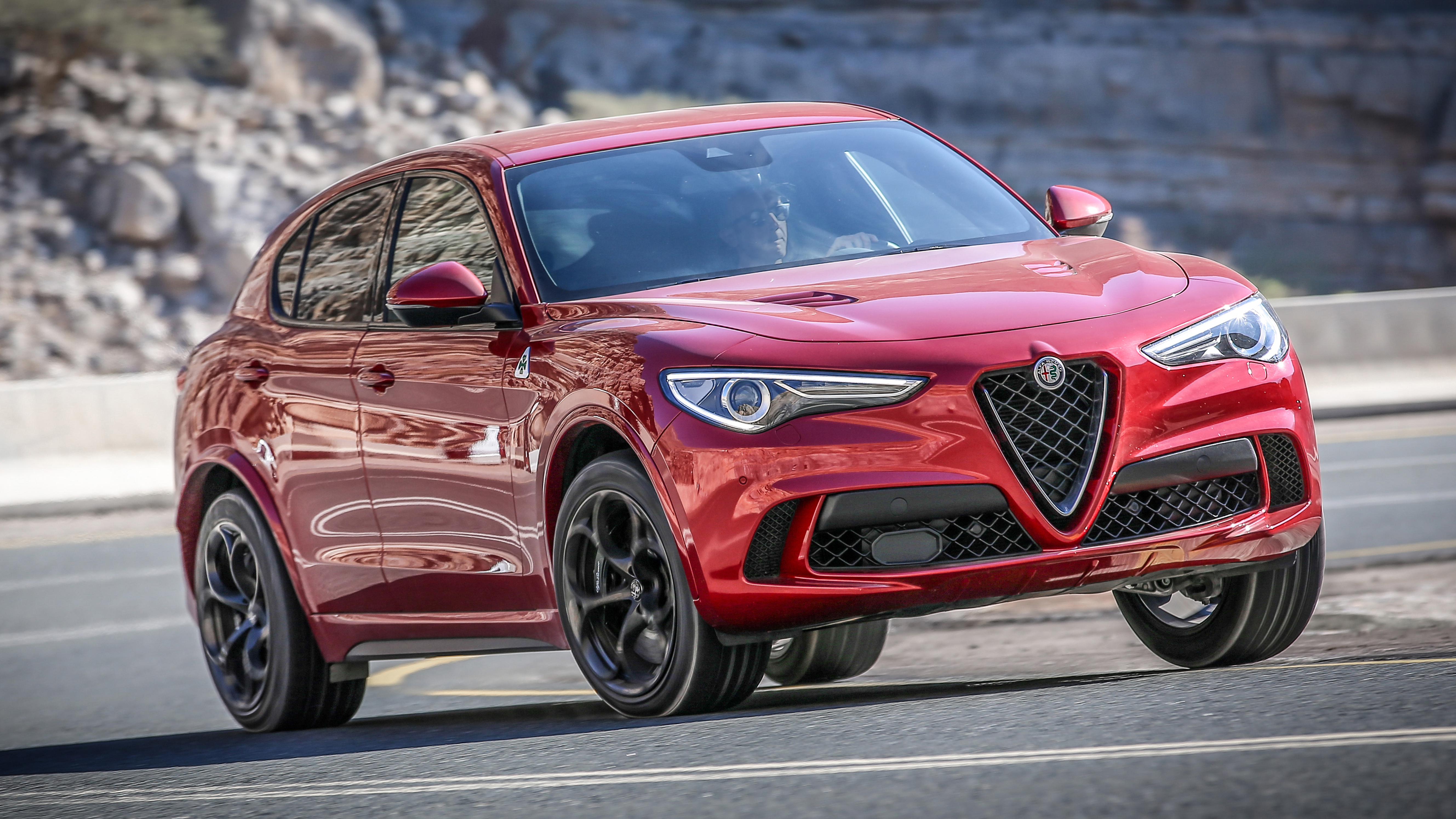 You know the tactic by now. Global appetite for big, imposing 4x4s is insatiable. Alfa Romeo needs to make money. The Giulia saloon’s platform and mechanicals were always intended – destined – to spawn the mid-sized Stelvio SUV. And since the Giulia (despite being a fine steer and refreshingly sorted-for-an-Alfa) isn’t actually racing out of showrooms, Alfa needs the Stelvio to start racking up the orders.

Offended by another classic marque kneeling at the super-SUV altar? Look at it this way: this is the closest you’re going to get to a fast Giulia Estate.

Is it very practical then, the Stelvio?

Not massively, compared to the new BMW X3 or a Mercedes GLC. It’s a sporty-focused car. Even the standard diesel version. Drive smartly, ask questions about visibility and spaciousness later.

Not that this is a standard version. Not by any means.

So this is basically a jacked-up Giulia Quadrifoglio super-saloon? Sounds promising.

It’s not quite that simple, but plenty of juicy bits are hoiked straight from Alfa’s M3-beater. First up, the magnificent, Ferrari-developed heart. The Stelvio Quadrifoglio runs a 2.9-litre bi-turbo V6 that, you’ll probably remember, forms three-quarters of the old Ferrari California T’s V8.

It develops 503bhp and 443lb ft, which is bang on the money for the moonshot, middle-sized SUV posse right now. AMG GLC63S? 503bhp. Porsche Macan Turbo? Even with the optional Performance Pack, it’s 60bhp down on the Italian.

Like the Giulia, that heroically muscular V6 is connected to an eight-speed automatic gearbox controlled, when you choose, by gigantic, column-mounted alloy paddles which are still as delectable as they are outrageous.

The supersaloon carryovers don’t stop there. Alfa’s also given the bigger, bluffer SUV the Giulia's carbon fibre prop shaft. It’s stopped short of copying the carbon bonnet and bootlid, though. Can’t say I blame them.

Is this the superleggera of super-SUVs?

If you like, but 1830kg does not equal A Light Car. Not in isolation. Compared to the competition though, this is an Ariel Atom. It’s at least 100kg less than an AMG GLC63, the Macan and so on. So the Italian’s got an immediate power-to-weight ratio advantage.

Those are the stats, anyway. I’d eyed them with cynicism, partly because hey, this is an Italian car, and modern gearboxes and turbos are very clever at helping cars hit numbers that they never feel quite as fast as. Think Audi RS5, or VW Golf R. Ultrafast point-to-point, but rarely do they let on they’re as frantic as the whoops-that's-illegal figures prove.

The Stelvio, on the other hand, goes even more outrageously than the Giulia. Maybe it’s the sensation of being sat up higher. Maybe it’s the silly driving position – Alfa’s forgotten its ergonomic fluke in the Giulia and given the Stelvio pathetically inadequate steering adjustment. At first, it’s like being sat on a bar stool driving a Sega rally arcade machine, if you’re tall. Regardless, the Stelvio just hurls itself down the road, seeming uninterested in the sheer mass and forces it’s tackling.

As per the Giulia, throttle response is immediate, and the gearbox is an utter peach. 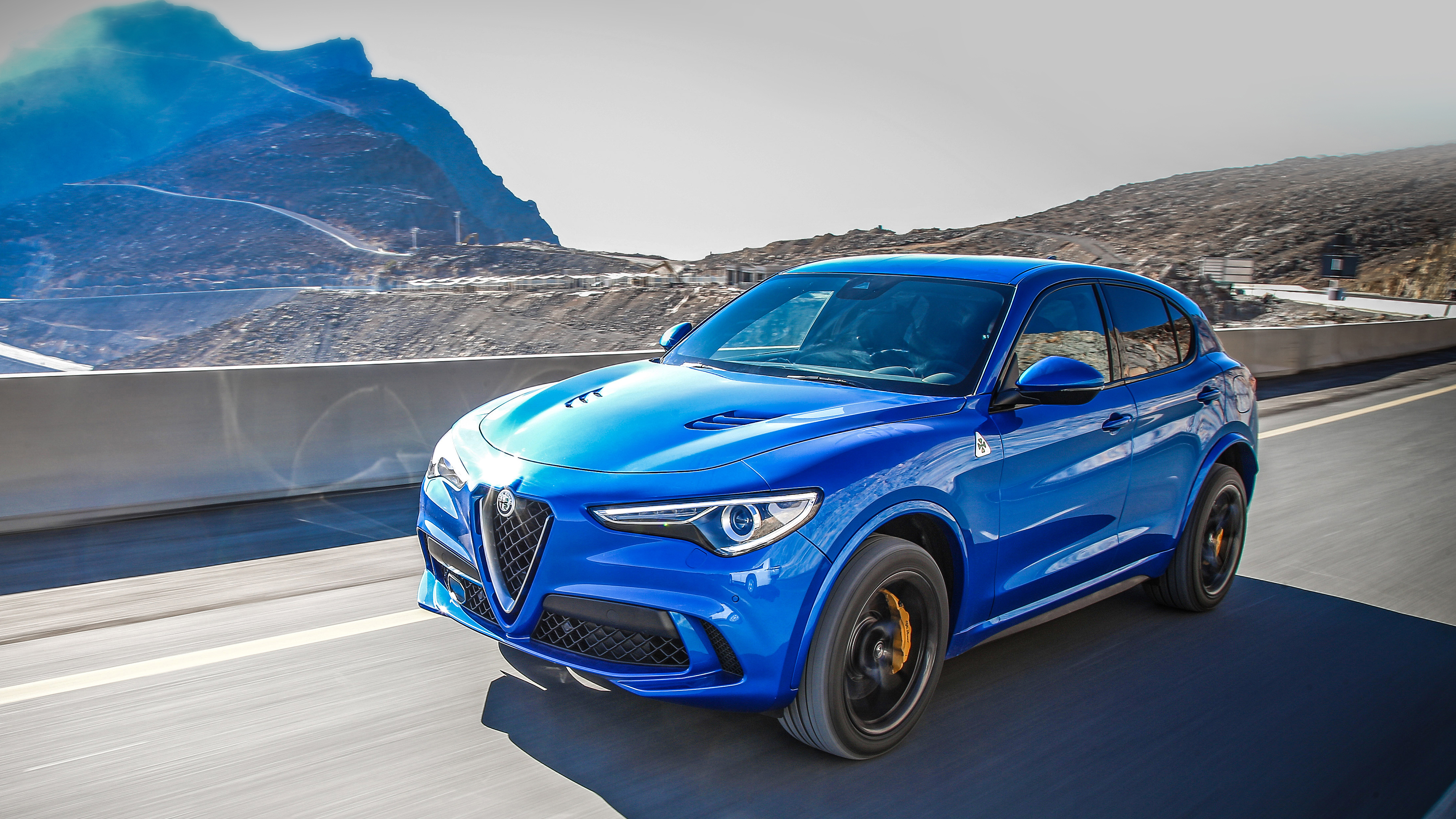 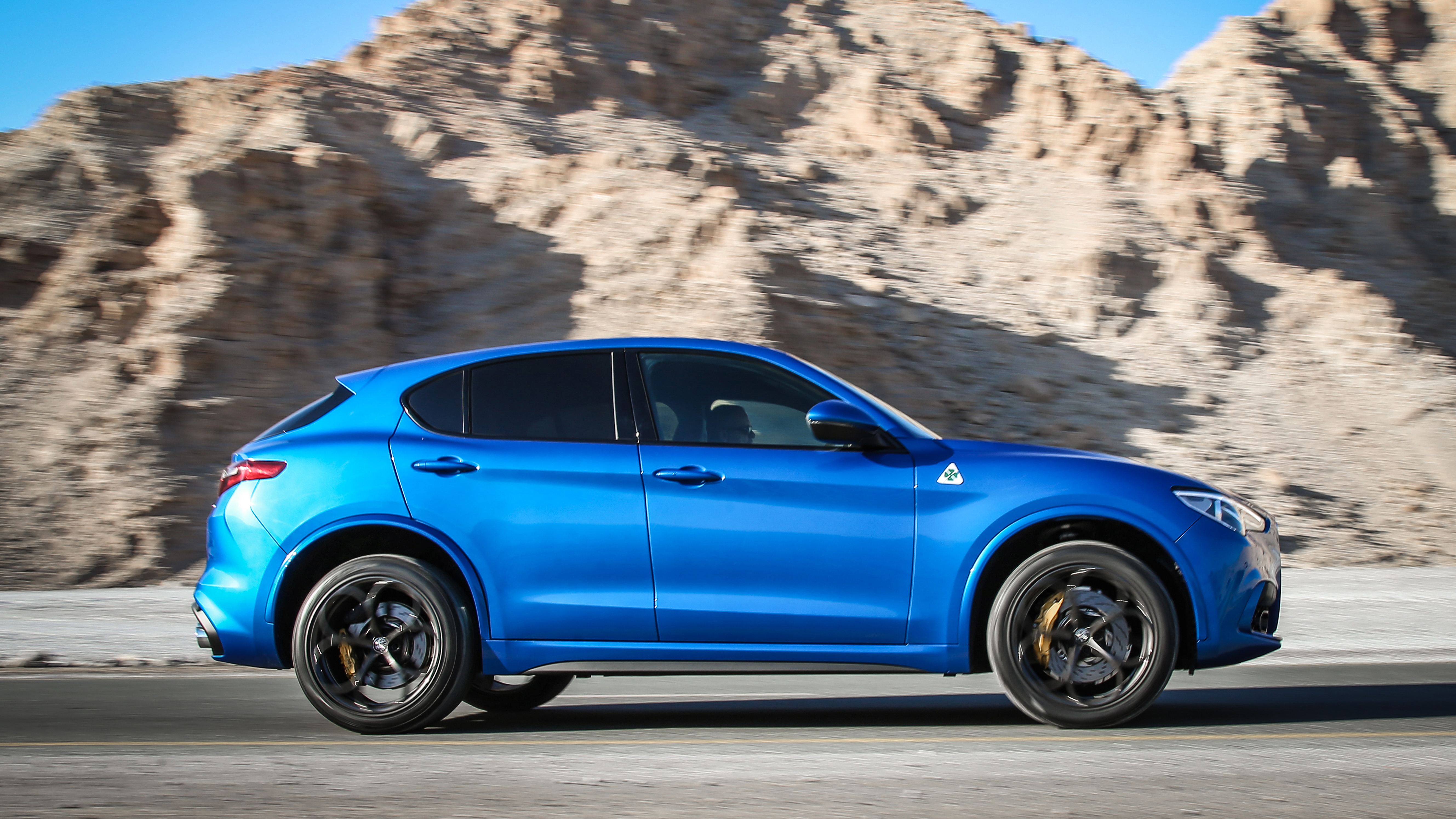 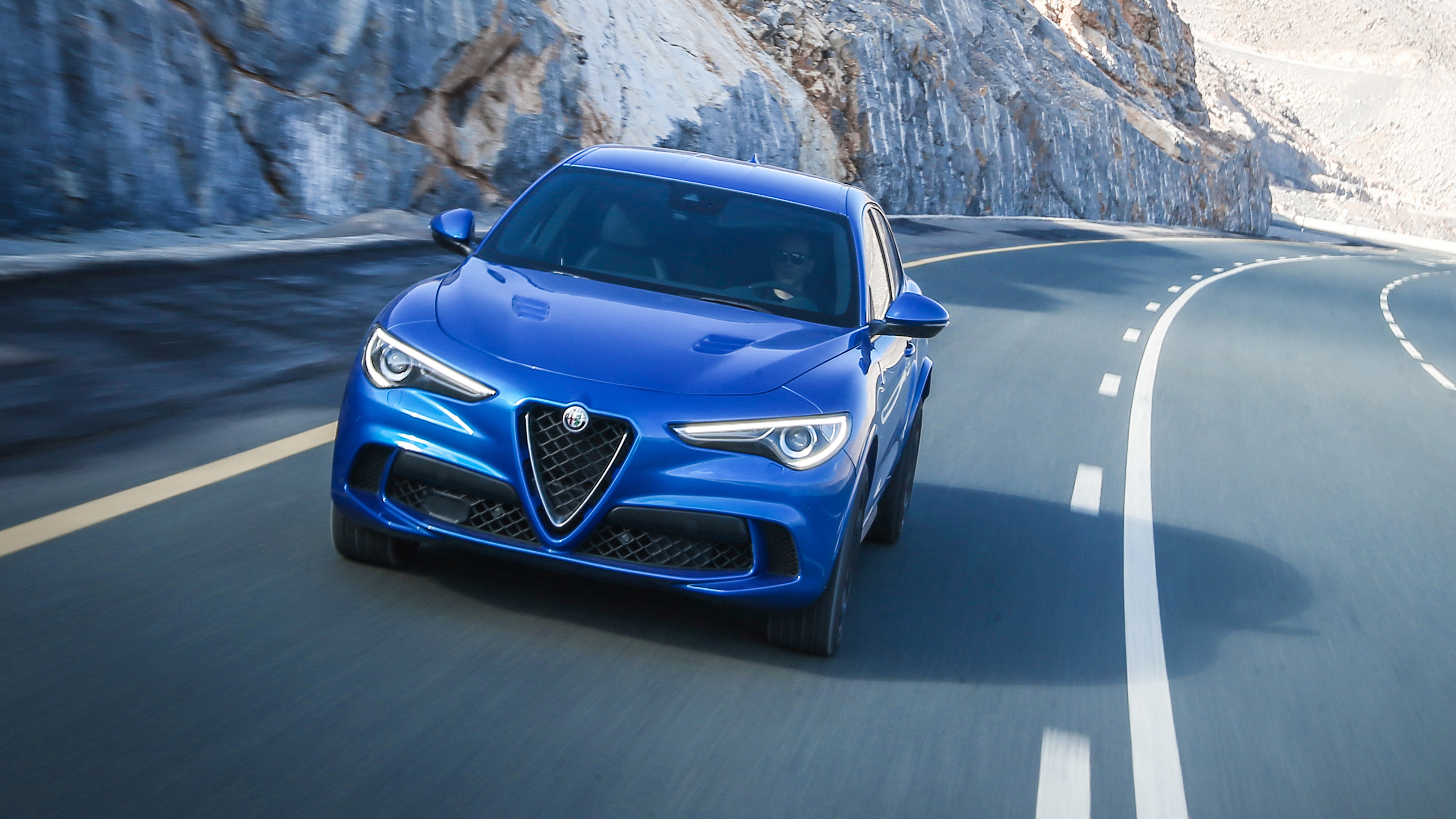 Surely some of that pace is down to four-wheel drive traction?

Thing is, this isn’t really a proper four-wheel drive car. Almost all of the time, the Stelvio’s front tyres are freewheeling. One hundred per cent of drive is channeled to the rear wheels, for greener efficiency and a purer sense of rear-drive balance. Only when the ECU detects the rear Pirelli P Zeros are being overwhelmed are the fronts allowed to ease the burden.

So, it’s not a super-sophisticated AWD system, and yes, if you get the car loaded-up mid-corner and ask for all five hundred horses, the way it begins to oversteer then slams power forward to neutralise the slide can be a little clumsy if the traction control’s still on. Better to stay just the right side of sliding in Dynamic mode, then. Or, switch to Race for the full ‘you’re on your own now, fella’, safety net-free experience. How’s that for purity?

Has Alfa calmed the noise down for its ‘sensible’ family SUV?

Er, that would be ‘no’. The Stelvio Quadrifoglio is a rasping, musical device. Alfa’s managed to herd many of the V6’s operatic decibels into the cabin, without ramming try-hard crackles and pops so far down your ear canal your eardrums bleed. It’s a furious-sounding machine – angrier and fizzier than the rolling barrage of the GLC63’s thunderous V8. Good job, Alfa.

So far, so good, for a blasphemous SUV. Next you’ll be arguing it does corners too.

Brace yourself. The Stelvio QV handles sensationally well for an SUV. In fact, I’d go so far as to say that no fast SUV nails such a close impression of its supersaloon cousin as the Alfa. It's maintained the Giulia’s sense of agility, of deftness, and super-sharp steering that’s matched by deft, controlled chassis (mis)behaviour. There's something approaching delicacy about thr way it attacks a road...

Apply it to some gnarly direction changes and there grip in quantities you’d scarcely believe from the 285-section rear P Zeros.

It’s stable, controllable, accurate, and though most roads around the northern Arab Emirates where we met the Stelvio are surfaced smoother than Silvio Berlusconi’s forehead, it can report rides superbly too. I know this, because I went and found some horrific off-track routes to get an idea of what the Stelvio will make of Britain. “Hah! This’ll undo it”, I thought. Er, nope. Set the powertrain to Dynamic, prod the damper button to ‘soft mode’ just like a Ferrari, and marvel at how supple this tall, heavy, flamboyant sports-tank can be.

Steady on, this is unnervingly close to being a 10/10 Alfa Romeo...

It isn’t. I’m not sure the Stelvio QF is as complete a car as its rivals, particularly that fab new AMG GLC63S. It’s not hugely spacious, the driving position is inane, the (lack of) view through the rear window is appalling, and the infotainment is only decent if you’ve got 2009-era BMW iDrive to compare it to. Fancy some logical sat-nav? Maybe shove your iPhone in the cupholder.

Did it break down?

No, happily. Likes a drink, though. Try eleven miles per gallon when you’re not hanging about. Are downsized turbo engines really working, guys?

There’s also no arguing that besides the Quadrifoglio’s slabs of gloss carbon trim and intricate green’n’white toothpaste stitching, the core cabin materials are brittle compared to the Germans. There’ll be an Audi RSQ5 and BMW X3M to worry about before long too, with lovely cabins.

But if they resist?

Then they’ll discover that Alfa has built a cracking performance SUV, worthy of not just competing against, but potentially out-driving the Porsche Macan Turbo it’s been benchmarked and will be priced against (think £65-70k when it arrives in the UK in summer 2018). It’s fast, comfortable, approachable, sounds naughty and it's genuinely rewarding to drive.

For sheer fizzing, soulful, addictive vigour, the Stelvio has mega star quality. Among its rivals, this thing’s every bit as stellar – and as loveable –  as the Giulia.