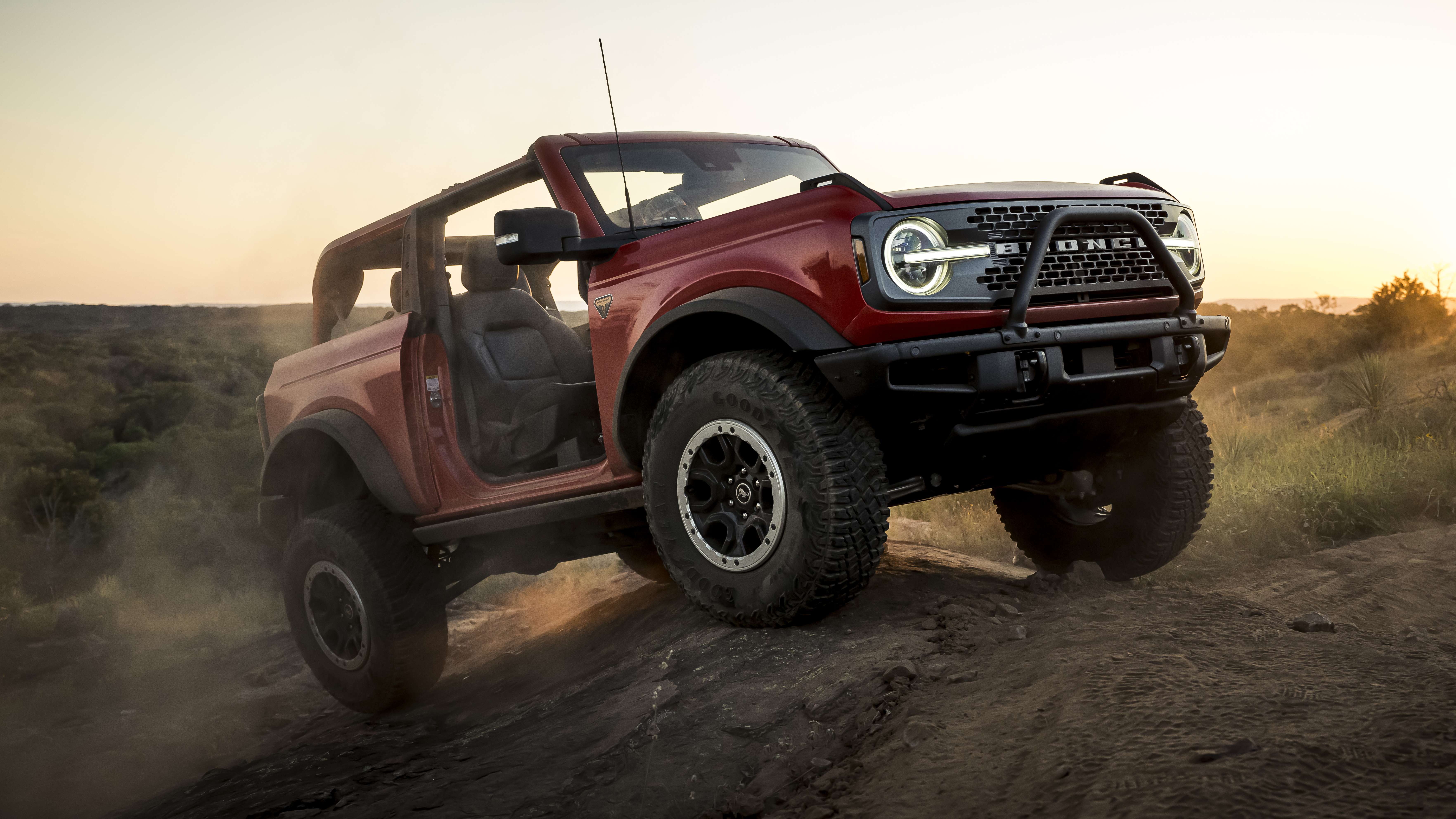 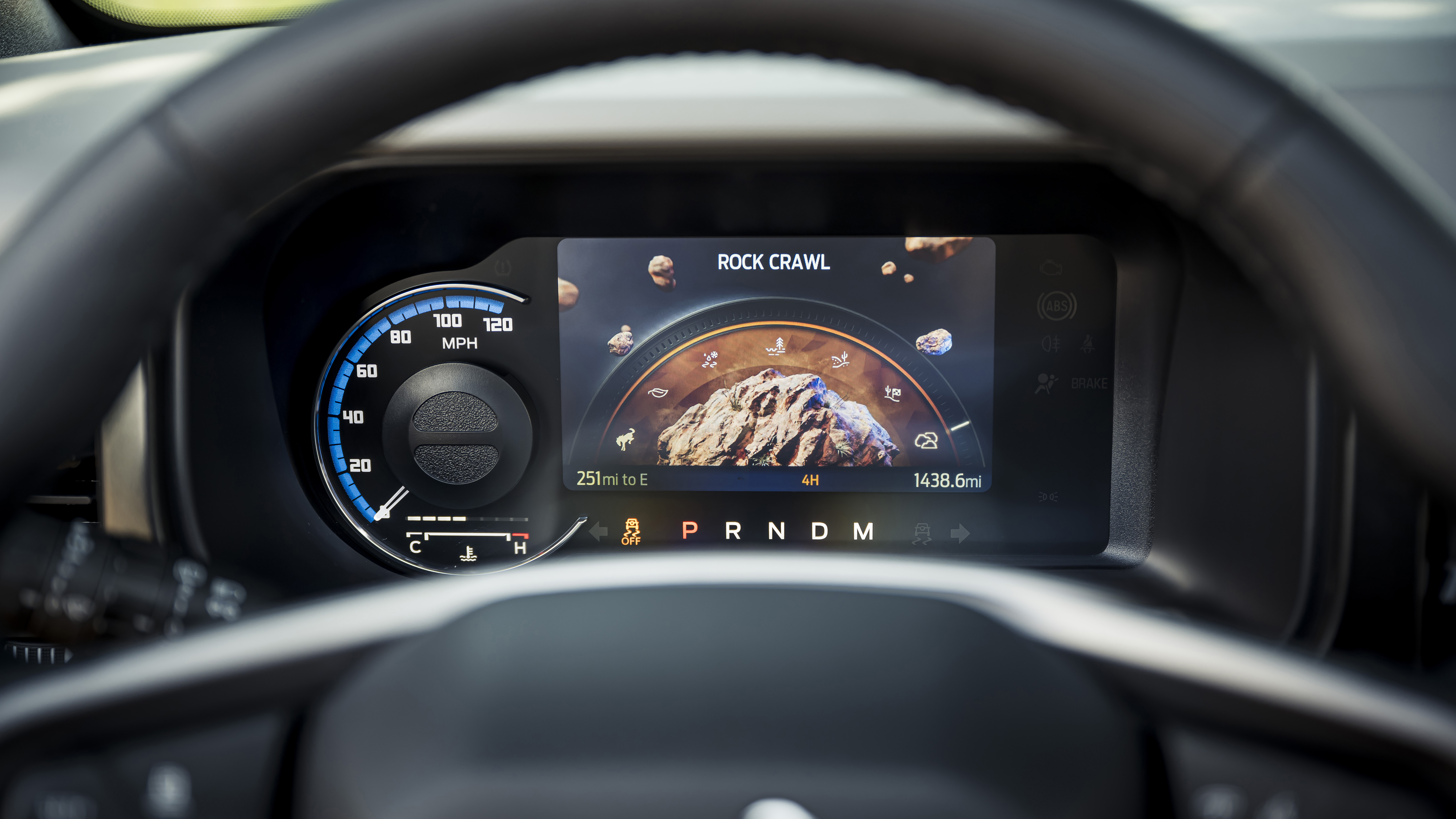 1 / 25
Advertisement
“Ford brings back the Wrangler-rivalling Bronco as an adventure truck. We like. Very much ”

It’s the new Ford Bronco. Which, given the hype around it, you’d expect to be an updated version of one of Ford’s biggest sellers. But no, this is the first new Bronco since 1977. That’s a 44 year hiatus.

It does plug a gap in Ford’s line-up though. Until now they haven’t had an off-road adventure truck to directly compete with the Jeep Wrangler. Don’t, because of its terrifically well resolved retro styling (taking inspiration from the 1965 original), assume this is an all mouth, no trousers machine. It’s not.

In terms of its mechanicals it sits midway between the Wrangler and its other close rival (for a British audience at least), the Land Rover Defender. In days gone by, the toughest, most rugged off-roaders had a separate ladder frame chassis with beam axles at either end and a body on top. That’s the current Jeep Wrangler. The new Defender was a radical shift, using a monocoque chassis and fully independent suspension at each corner. The Bronco is more aligned with the Jeep (its separate chassis is similar to the Ranger pick-up), but has independent double wishbone front suspension.

Does that make a difference to the way it drives?

Absolutely. The independent front end gives it decent stability and accuracy, and makes this a car that can cope with long journeys and get around a corner without stumbling. It’s not as refined and comfortable as the new Defender, but most chassis shudder has been eradicated, and it feels markedly more sophisticated and capable on-road than the Wrangler.

Off-road it’s deeply, deeply impressive. A rotary selector on the console gives you access to the G.O.A.T. modes (Goes Over Any Type of Terrain, rather than Greatest Of All Time, although we’re sure Ford wouldn’t mind you getting that wrong), multiple driving modes which control various parameters, while buttons on the dash allow you to lock the front and rear differentials and perform a couple of extra tricks. One allows you to hydraulically disconnect the front anti-roll car to improve axle articulation, while another locks the inside rear wheel to enable you to turn more tightly off-road. The best mode is the one-pedal system. Much like in an electric car, lifting the throttle applies the brakes – very handy for precisely controlling your speed off-road in rock sections. That, in particular, works very well indeed. Want more on driving the Bronco? Click the tab.

Talking of electric, is there a hybrid version?

At launch the choice is between two pure petrols. No diesel, no hybrid (yet), no electric version (probably ever). The 2.3-litre four cylinder Ecoboost we’re already familiar with from the Mustang and Focus RS, although in the Bronco it develops 300bhp and 325lb ft. Above that there’s the engine we drove, a twin turbo 2.7-litre V6 Ecoboost. Not much more power (330bhp), but at 415lb ft, a chunk more torque.

It’s a smooth, unobtrusive engine, with enough muscle to make the top spec Bronco feel significantly lighter than its 2,321kg kerbweight. A kerbweight you can easily lighten further yourself.

Like the Defender, the Bronco can be had as either a three- or five-door. All of them come with removable doors. The three door comes as standard as a hardtop with lift out roof panels, while the five door has a canvas lid as standard, but can optionally be had with the hard top with removable panels over the two rows of seats, allowing you to fundamentally change the look and feel of the car. The panels remove neatly and easily via mechanical latches, and fit well enough that wind noise isn’t an issue.

Will it be sold in the UK?

Here’s the bad news: it’s unlikely to be sold in the UK. Stranger things have happened, and the current Mustang has done great business for Ford, but Jeep’s Wrangler doesn’t sell well in Europe and Ford will surely see that as reason not to invest in Bronco sales over here. Book your private import now.

The trouble is that across seven separate trim levels, plus five separate packages, that list cost steps up quite a bit. Our fully loaded First Edition which included the optional Sasquatch pack, was over $63,000 (£45,000).

With the what pack?!

Sasquatch. Americans do the best names. That gets you 35-inch tyres, those electronic diff locks, Bilstein shocks, raised suspension and more. And let’s face it, you can barely get a base Defender for the same money as a fully loaded Bronco.

The options list runs to over 200 items, and in addition Ford has worked closely with aftermarket suppliers to allow owners to fit light bars, roof racks, winches and so on. Any extra electronics can then be controlled via roof mounted auxiliary switches (and supplementary wiring) that Ford has thoughtfully included up front.

“Ford brings back the Wrangler-rivalling Bronco as an adventure truck. We like. Very much”

Ford’s strap line is that the Bronco offers the ‘toughness of an F-Series, with the attitude of a Mustang’. And it emphatically achieves that. This is a tough, very capable machine, but one that comes across as accessible, fun and easy to drive both on and off-road. It doesn’t take itself seriously, looks fantastic and wants to get out there and get stuck in. Yes, it’s less cultured than a Defender, but Top Gear wants one very badly indeed.