£46,621 when new
Read why you can trust our independent reviews
Paul Horrell
Published: 06 Sep 2022
comments
Skip 10 photos in the image carousel and continue reading 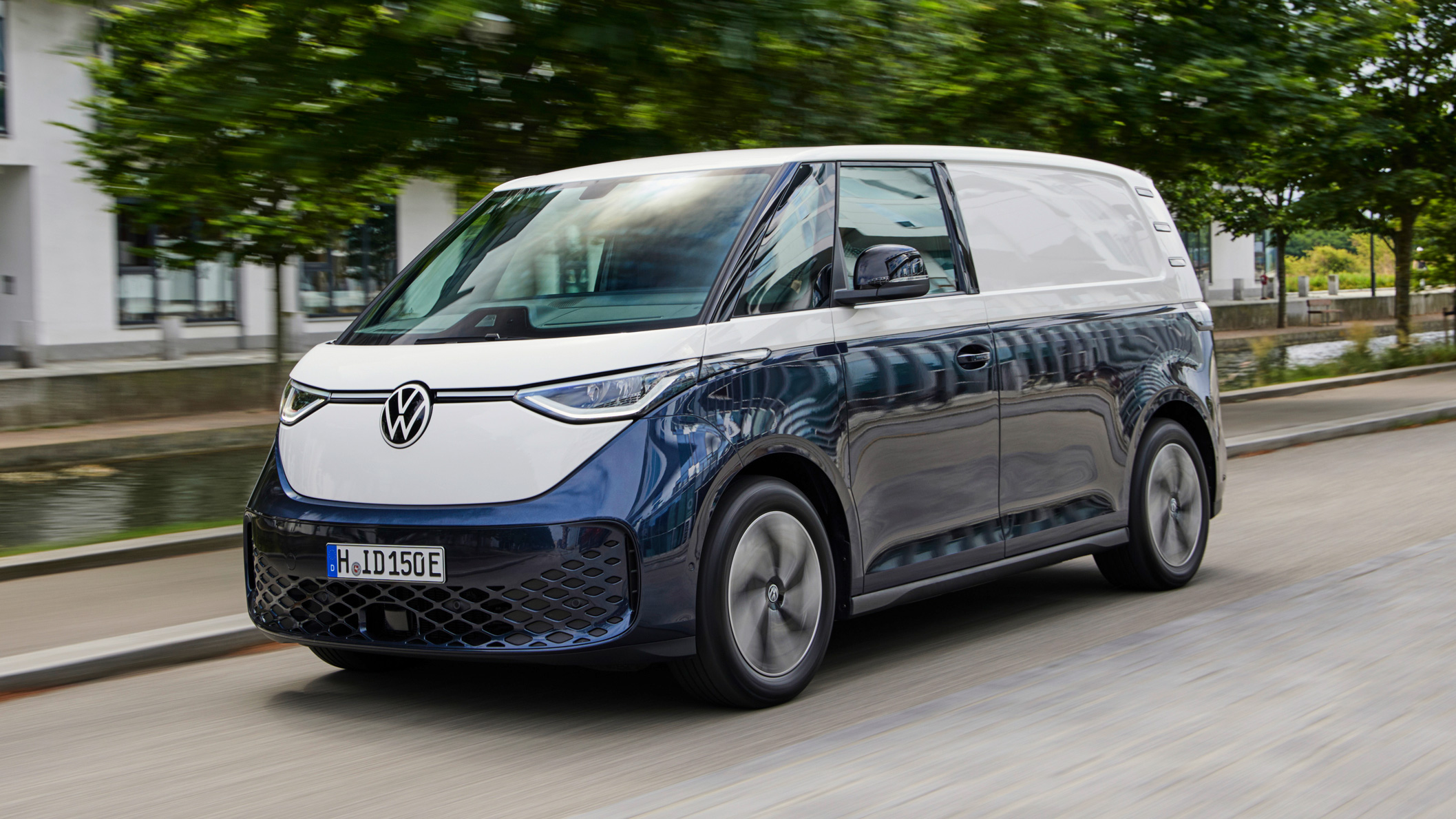 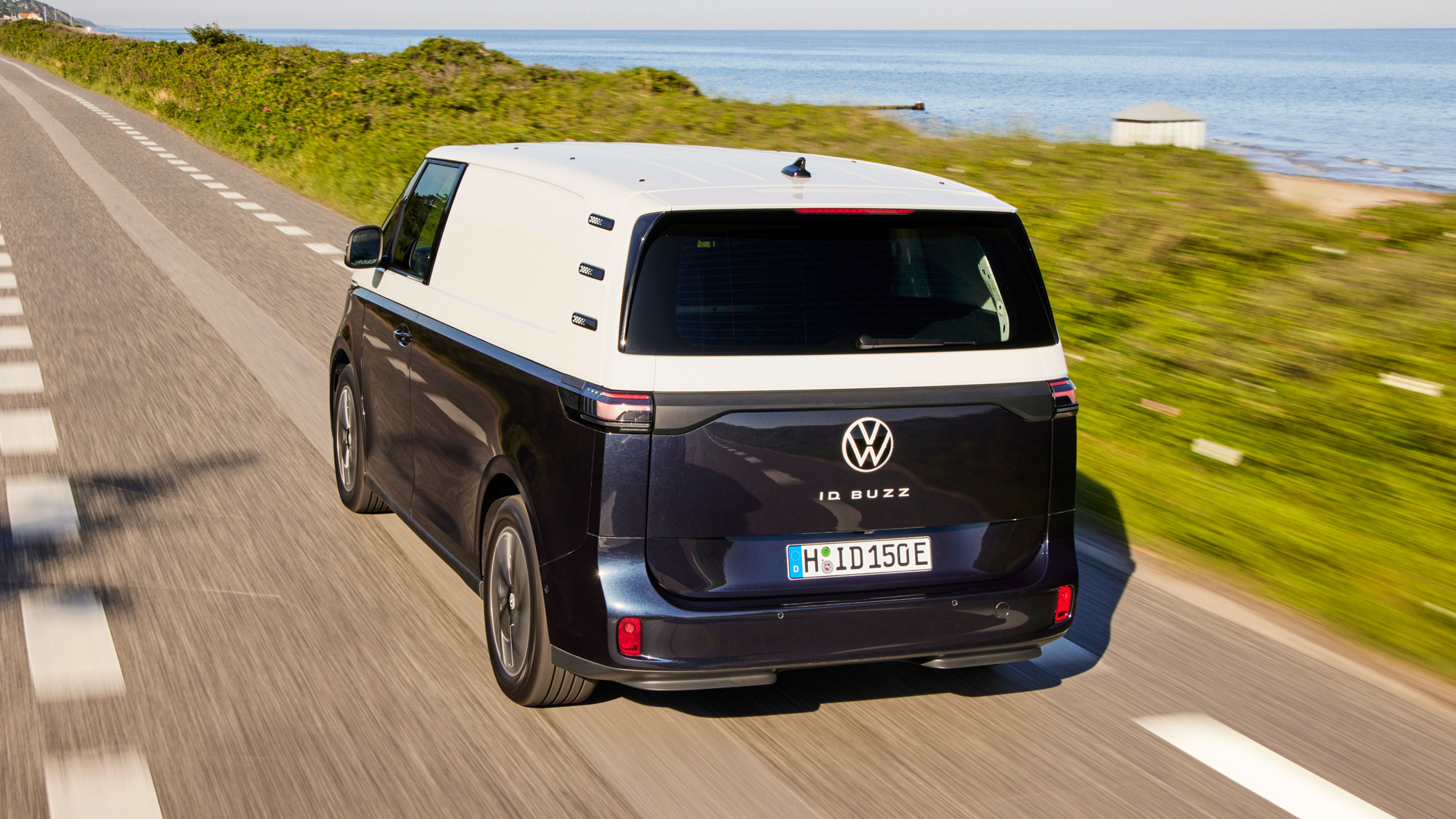 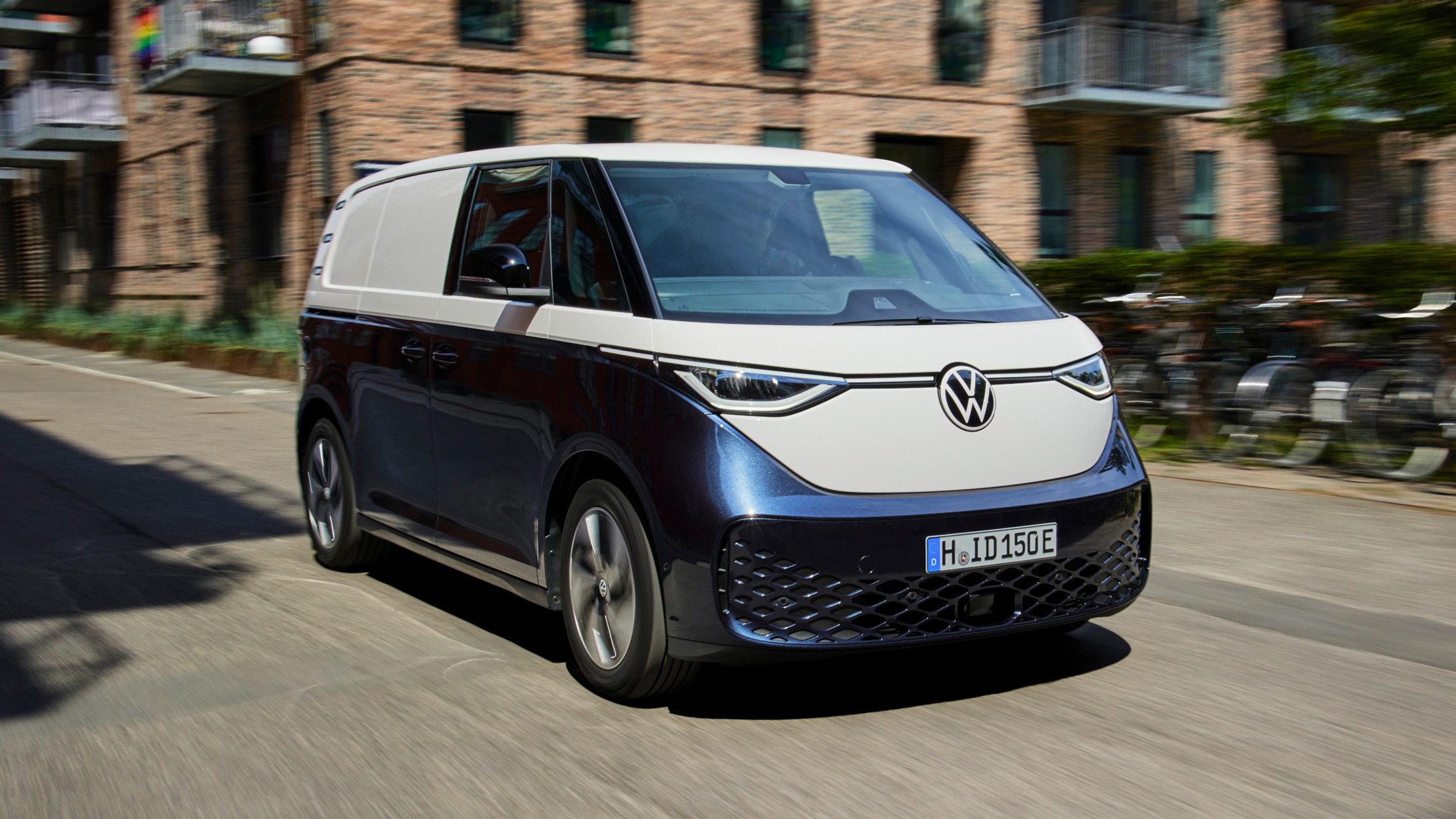 Well yes, but the ID. Buzz is a bit more than that. In many ways any electric van is perfect for urban delivery duty, never mind the aesthetics and conscience. They're convenient and silent and cheap to run. And this is a pretty good electric van.

So it isn't merely a bit of retro fluff like the New Beetle was?

Nope. It's one of the first vans to market that has been engineered end-to-end as an electric vehicle. Rivals like the Ford e-Transit, the Renault Kangoo E-Tech and others from Nissan and the Stellantis conglomerate are adapted diesels.

As for the retro element, well it's better curated retro than the Beetle. VW waited for the electric platform before doing a vehicle that pays homage to the first Transporter van, because that's the only way it could echo those rear-engined proportions.

Which means a short front overhang. It's not that short mind. Unlike that original, the new Buzz Cargo doesn't use the driver's feet as the crumple zone.

Besides, in Britain the Buzz has to exist as a fine piece of design in its own right because for most people here, any historical trail has gone cold. VW sold hardly any original Transporters in the UK in the 1950s and 60s. British van drivers mostly chose Bedford, Commer and Ford Thames. And Morris, of course.

Looks like a van version of the Buzz MPV?

The MPV version of the Buzz is Top Gear's Electric Car of the Year and it's a lovely thing. The Cargo looks like that from the outside, bar an absence of rear glazing. And it's exactly the same underneath – 204bhp at the back axle, 77kWh in the battery.

But… the MPV has a beautiful cabin in mid-century modern style, designed by people who evidently loved it. Mid-century modern was more of an American and Scandinavian design movement, not German. But we'll let that pass.

The Buzz Cargo's cabin and dash are distinctly more vannish than the MPV’s. Hard, boring black plastics predominate, presumably to save cost and add robustness. But more conventional shapes predominate too. The degradation of visual and tactile pleasure seems almost spiteful.

There's extra storage, as van drivers usually need it, on the Cargo's flat dash-top. But it doesn't have a rubber mat so everything slides and clatters about. You can have a three-seater or a two-seater with a set of storage boxes between the seats. The two-seater is the only way you'll get a compartment big enough to hold a laptop or clipboard – the door bins are too shallow. The floor is rubber rather than carpet, which makes sense.

The one thing that could usefully have been thrown overboard, VW's terrible laggy touchscreen-based interface, remains. Boo.

What will it carry?

Two pallets. A total mass of just over 600kg (and of course that doesn't vary with fuel load because a charged battery has the same mass as a depleted one). You get two sliding side doors, optionally electrified, and optional attachment rails for shelving and cabinets. Another tick-box is a 230V AC socket for running power tools and so on.

Extremely well for a van, and far better than pickups. Not too bad even for a car. It's stable and sensible, but all-round independent suspension gives it a palpably more sophisticated ride than any other van I can think of. It hardly rolls in corners. The optional 20-inch wheels have plenty of grip; the 18s make it ride even more quietly but the steering is a little fuzzier.

Acceleration is of course smooth, and performance more than adequate. It's 10.2 seconds for 0-62mph. At motorway speed it tails off. Forget the van-driving cliché, sat in the outside lane at 87mph three feet behind a car's back bumper. Do that and you'll massacre the efficiency and range. Anyway, in this age of employers' duty of care, most vans of all kinds have speed limiters and remote tracking so they can't smash the speed limits.

Braking is precise, too, blending the regeneration and friction seamlessly. There's a bit of whine from the drivetrain, and some wind noise, but overall it's refreshingly hushed compared with a diesel van.

The driving position is comfy too – upright of course, but not skewed. And you don't have to work a clutch or gearlever so it's extra relaxing.

What's it best at?

Well, the style will advertise a small business, and lots of initial interest has come from them.

From delivery fleets too. Drivers doing frequent-drop rounds are surely going to love this. You just keep the key in your pocket. Door unlocking, and the electronics coming alive, all happen automagically. Twist a stalk and you're in D. Drive to the next drop, press P and jump out, and it cuts off. Touch the door handle and it locks. No messing with a key, handbrake, ignition, clutch, or gearlever.

Residents of city streets will be happy that there's one less diesel engine rattling past their door. Fleet owners will be delighted at the improvement in driver productivity and the slashed fuel cost.

Talk about the electric range.

Of course provided you slow down gently enough to use regeneration rather than friction, the efficiency won't be greatly hurt by being loaded. Unlike a diesel van.

Charge power peaks at 170kW DC when the battery is close to empty and you're plugged into an ultra-rapid charger. So it's half an hour for 5-80 per cent. Pretty good.

OK, it's not a van for long-distance mile munching. But for urban deliveries, the range is absolutely plenty. On weekdays only, 200 miles a day and overnight charging at the depot equates to 50,000 miles a year. And if the van's job is not deliveries per se, but getting stuff to a work site – for example service engineers or plumbers and electricians – it'll need charging only every few days.

What does it cost?

Retail it's £46,621, and you can deduct from that £5,000 when it's approved for the government PIVG subsidy (vans still get this). That's for the base model called Commerce, which has Apple CarPlay, three-abreast seats and LED headlights.

An extra £5k or so brings the Commerce Plus, with VW's own navigation – no great shakes over CarPlay – and adaptive cruise, park assist, a rear-view camera and 20-inch alloys.

And finally the question everyone with a, y'know, lifestyle wants to ask… can I have it as a camper?

Not from VW. But they - and others - have basic conversion kits, a slot-in cassette with a fold-out double bed, below which lives a slide-out, two-burner gas stove, a mini-fridge and a sinkette, reached through the open tailgate. Have that for weekends, work in the week.

Third-party converters will doubtless also launch swivelling brackets for the front seats, and a pop-up roof.

But VW's own California will come late next year, on a longer wheelbase. You can't so easily make a camper out of a Buzz MPV as it stands, because the rear seats are fixed. Advantage to the Cargo.