£409 p/m
External link to
with Leasing.com
Read why you can trust our independent reviews
Top Gear Team
Published: 06 Aug 2020
Skip 13 photos in the image carousel and continue reading 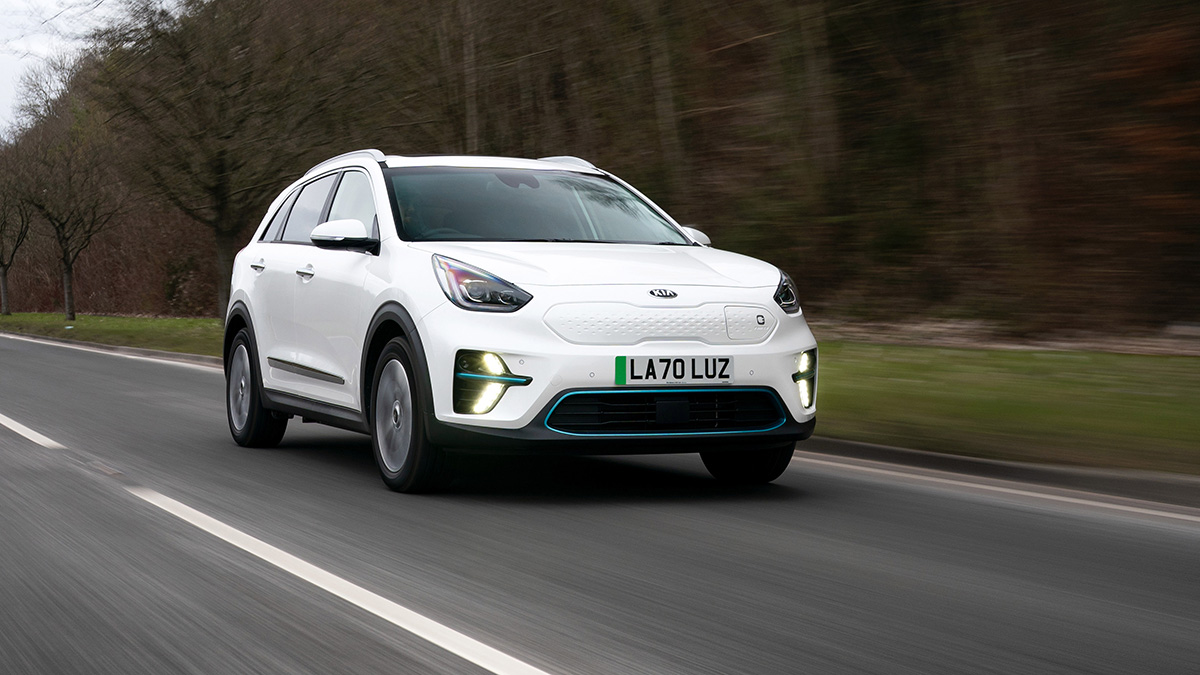 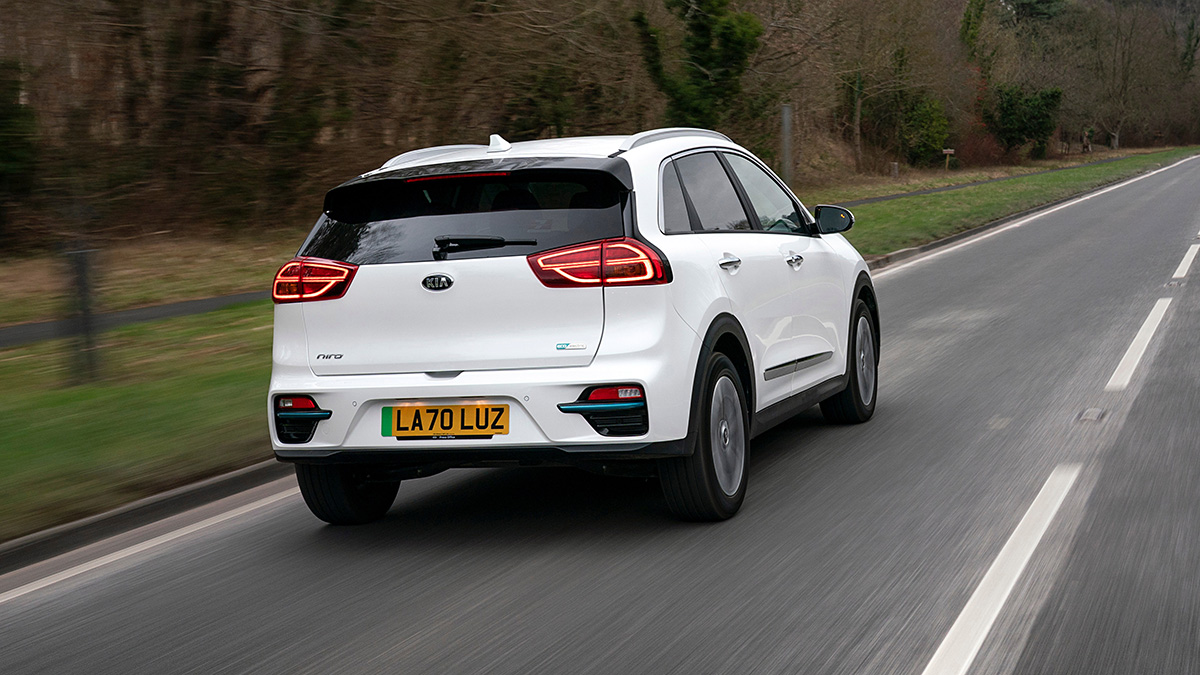 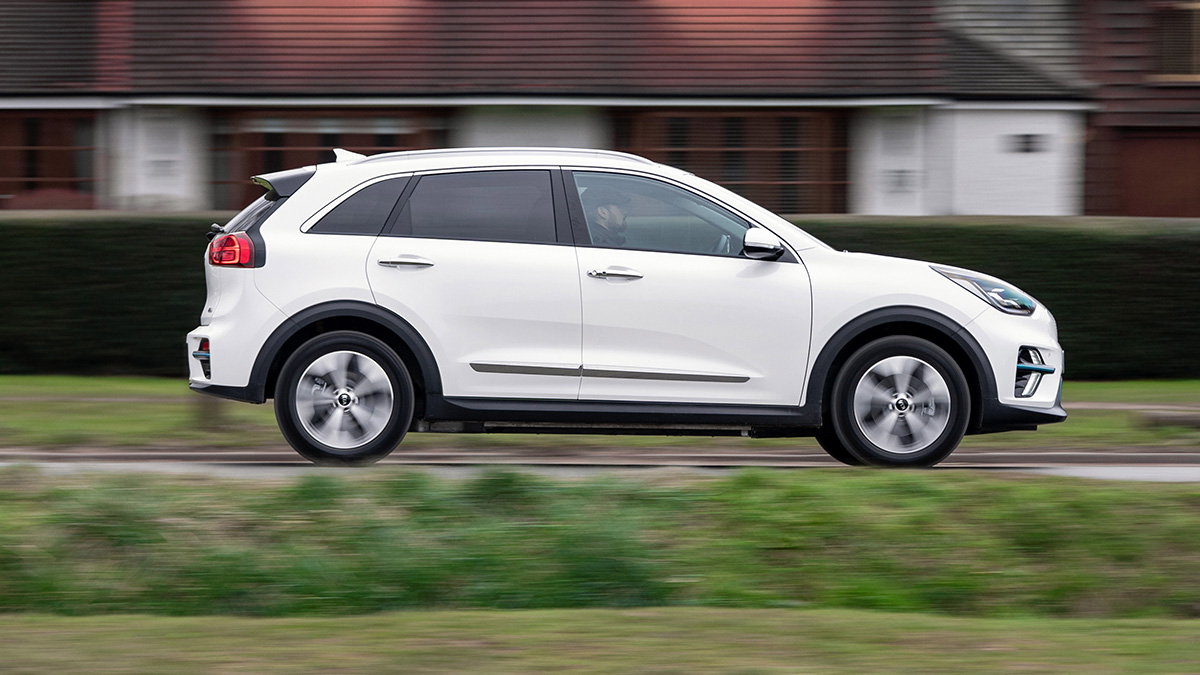 1 / 13
Advertisement
“Absolutely the Niro to have. Far more interesting and even more practical than its hybrid siblings ”

Not exactly a looker. Overcrowded dash

In both its ‘self-charging’ hybrid and plug-in hybrid forms, the Kia Niro is an acceptable (if rather plain) family-sized crossover. The e-Niro is a different kettle of fish, though. Are you still an early adopter these days if you ditch internal combustion altogether? Probably not, but you’ll still get the opportunity to pull an “I’m doing my bit, are you” smug face whenever someone asks what you drive.

And while the visual changes over the standard Niro may not seem drastic, they do at least give the e-Niro its own character. The closed-off grille and blue accents are both stylish touches and look particularly good with the Midnight Black paint option.

The Kia has been among the most popular EVs for the last couple of years, regularly topping the zero emission chart, if someone were to sit down and produce such a thing. The e-Niro is the approachable face of the future, offering the chance to absorb exciting technology into your life without any of the aggressive in-yer-face quality of some showier rivals. Yes, it’s an electric vehicle, but that’s not its main party piece. It also makes a good fist of being a practical family wagon.

It’s front-wheel drive only and features a single-speed automatic gearbox – as well as Kia’s first ever rotary gear selector, fact fans. Kia says there’s ample space for five adults inside too, and that the Niro was designed to sit between the Ceed hatch and the Sportage SUV in size.

The e-Niro range gets a simple choice of ‘2’, ‘3’ or ‘4+’ trims – you just need to decide whether to plump for fancier paint (that’s around £600 extra) and whether you want to opt in to one of Kia’s generously priced fixed service plans up to five years.

The entry-level 2 features a new-for-2021 39kWh battery with a lower powered 134bhp motor, but you can upgrade to the 64kWh battery and 201bhp motor fitted as standard to 3 and 4+.

The e-Niro’s closest rival – the Hyundai Kona Electric – does look far more interesting with its Stormtrooper styling and more extensive paint palette, but the e-Niro scores crucial points on price and practicality. The 39kWh version might only be a few hundred pounds cheaper than the equivalent Kona, but the 64kWh e-Niro offers a massive £6k (almost) saving on its cousin thanks to careful juggling of the price list after the government’s plug-in grant restriction to cars under £35k. The one sacrifice with the Kia over the Kona is a reduced range of 282 miles versus 300.

That headline range figure is what really seals the appeal of the e-Niro – nothing else save a Volkswagen ID.3 or the aforementioned Kona will get you as far for the price. You’re looking at more expensive rivals such as the Tesla Model 3 and Ford Mach E to match the mileage and then on towards premium competition from Porsche and the like before you’ll get as far.

“Absolutely the Niro to have. Far more interesting and even more practical than its hybrid siblings”

If you can stump up the funds, this is absolutely the Niro to have. It’s so much more interesting than its internal combustion-engined siblings and is even fun to drive once you get used to the slightly numb feeling of regenerative braking. Plus, it’s more practical and has a bigger boot than the hybrids – that crossover shape really does make sense when paired with an all-electric powertrain and a battery under the floor, doesn’t it?

If you need a spacious EV and you consider the Hyundai Kona’s looks a bit ‘out there’ – the e-Niro is your answer. It’s a sensible car with more than enough range to allay the main fear of first-time EV buyers, and with looks that are nowhere near as polarising as the Soul. The entry-level 2 makes it yet more accessible if you’re on a tighter budget.

Its only real drawbacks are that slightly bouncy ride and a busy interior layout, but neither should be considered deal breakers. Competition in this segment and at this price point is thin right now too and will be until the rest of the world catches up with the Koreans. The e-Niro could be considered an ideal family car though, not just an ideal, family-sized EV.