Read why you can trust our independent reviews
Top Gear Team
Published: 06 Aug 2021
Skip 33 photos in the image carousel and continue reading 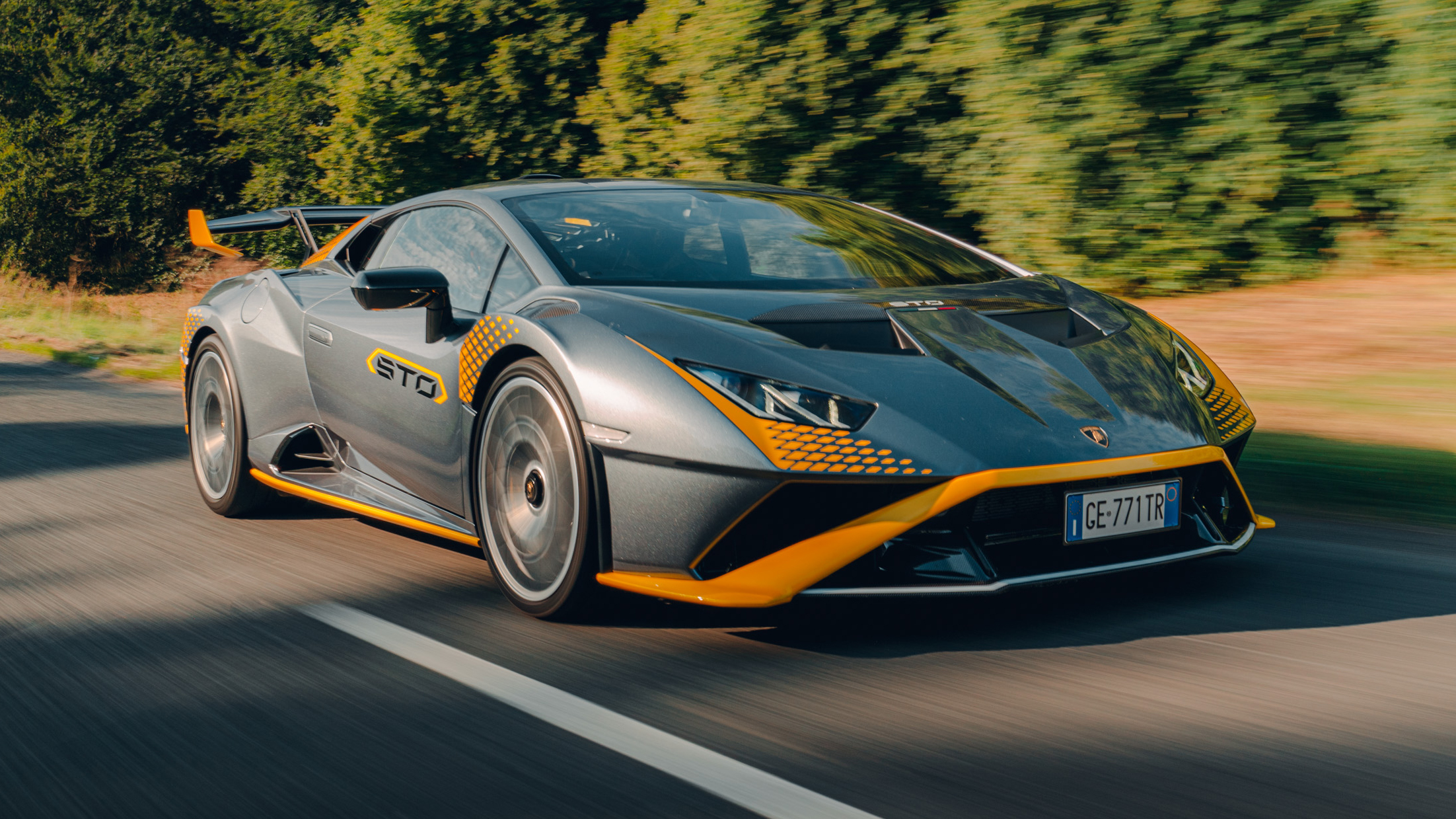 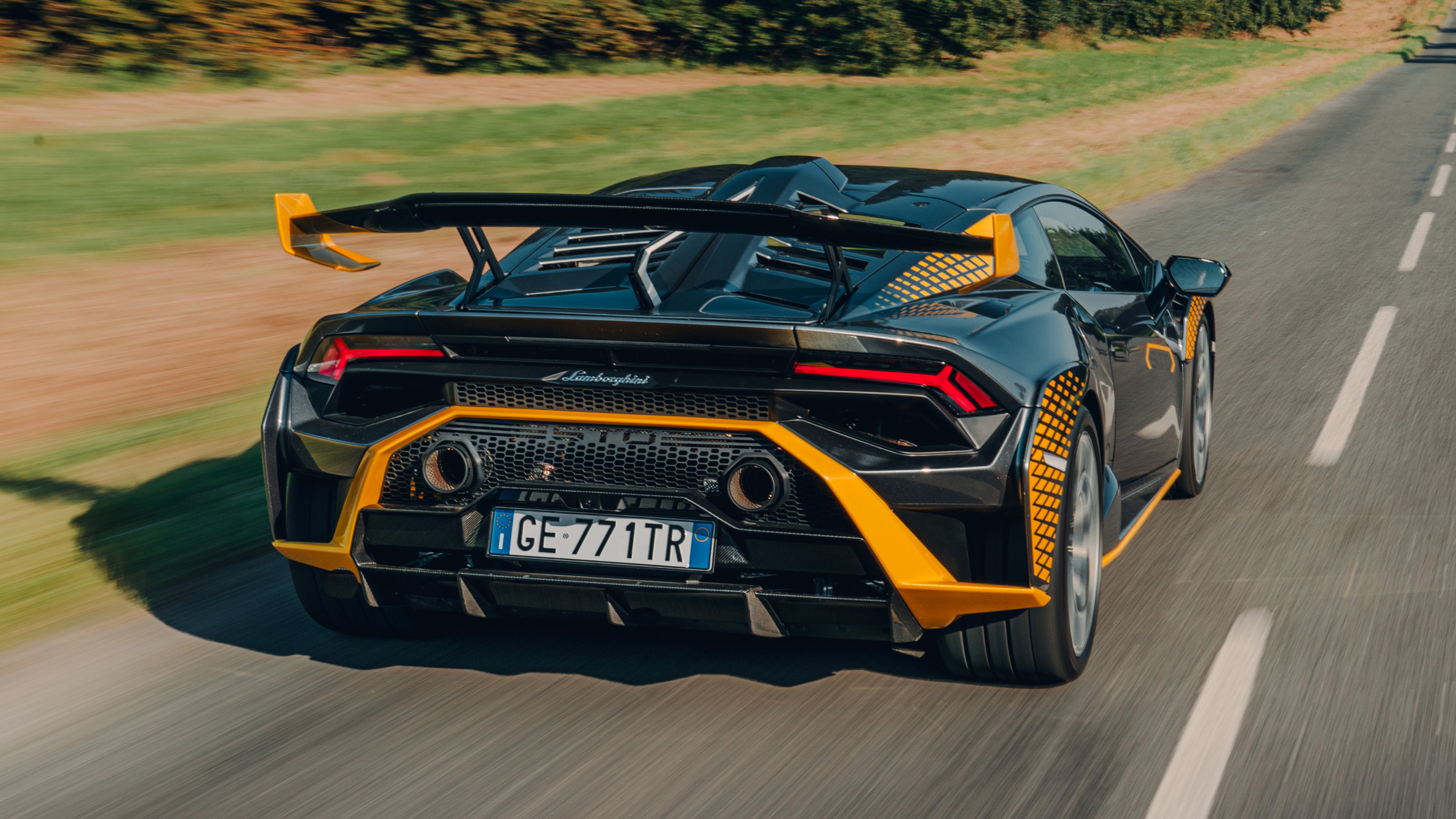 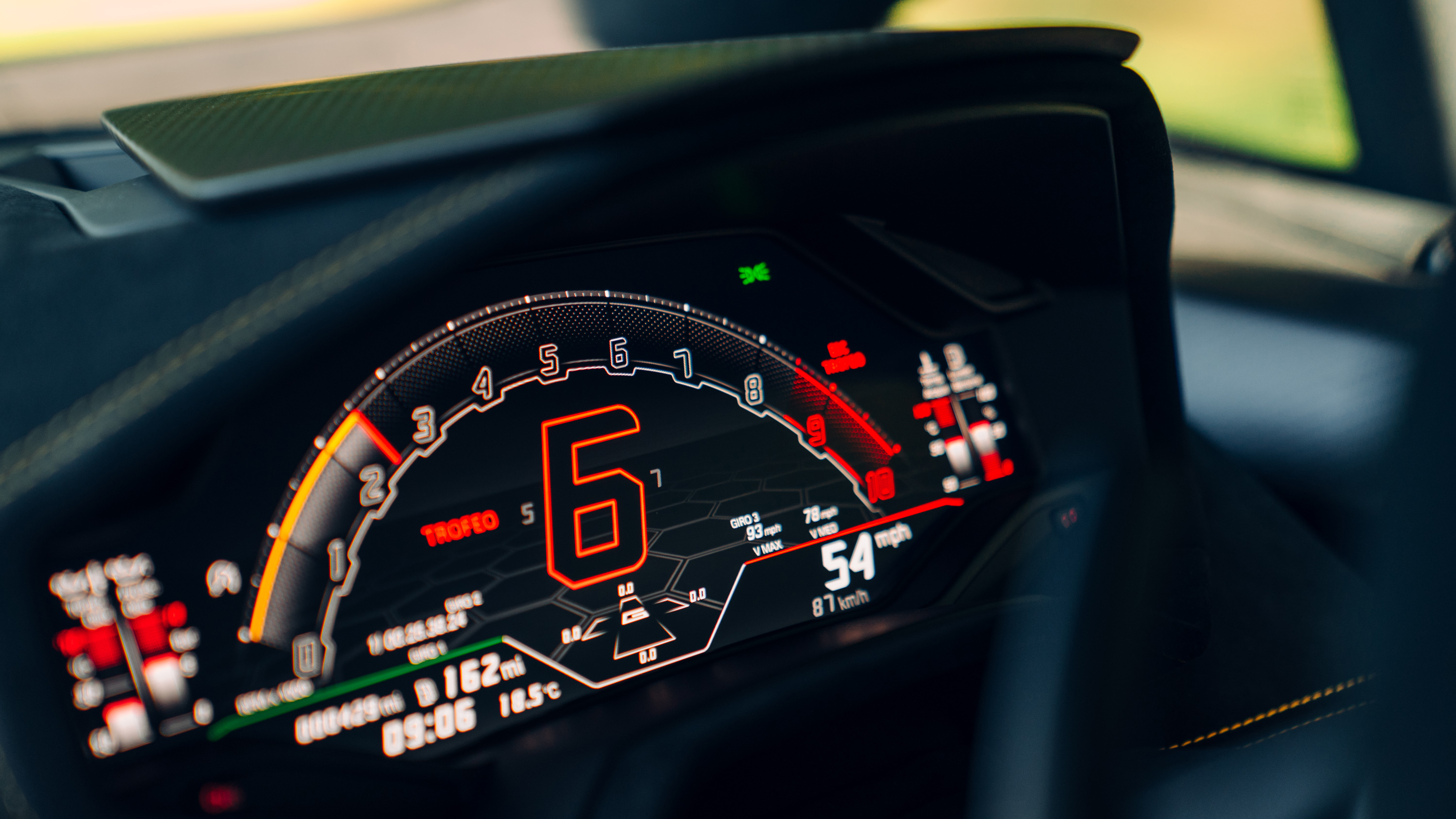 1 / 33
Advertisement
“Don’t let that drama, stridency and raucousness deceive you. Underneath, the STO really knows its way around a circuit ”

A Lamborghini Huracán turned up to… well a good notch above the Performante. The new STO (Super Trofeo Omologata) claims to take the road-going Lambo experience a step closer to the Super Trofeo Evo one make racer and GT3 Evo cars. Lamborghini claims it’s the first car they’ve developed where track ability takes precedence over road driving. Pushed further than the Aventador SVJ even, in a bid to tackle rivals such as McLaren’s 620R or 765LT, the AMG GT Black Series and whatever Ferrari chooses to name the inevitable hardcore version of the 296GTB.

As far as numbers go, the STO’s engine struggles to hold its head up in that company. The 5.2-litre V10 is unmodified from the Performante, developing 631bhp and 416lb ft. But as ever, numbers tell little of the tale. The sheer ferocity and volume delivered by this 8,500rpm naturally aspirated motor make it feel even quicker than its claimed acceleration (0-62mph in 3.0secs, 124mph in 9.0).

What's been changed then?

The main mods over the Performante are the removal of the front driveshafts – the STO is purely rear-drive – the addition of rear-wheel steering, further weight saving and a lot of aero work. All told it’s 43kg lighter, which doesn’t sound that much. Apparently removing the front drive gubbins only saves 20kg, while 4WS adds 8kg back in. A thinner windscreen is 20 per cent lighter, there are magnesium wheels and carbon body panels that contribute to a 1,339kg dry weight. Light, but a 765LT has a dry weight of 1,229kg…

The aero, as you can see, has moved on more. And not subtly. Lambo says downforce is up 53 per cent compared to the Performante, which – some background reading suggests – developed 350kg at 186mph. Interestingly, Lambo has abandoned the ALA technology that ingested air at the base of the rear spoiler’s pillars and blew it out along the trailing edge. This is a simpler strategy: a manually adjustable, three position rear wing.

But that’s not all is it?

Far from it. For starters, there are unusual fins down either side to help channel air towards it, plus the gaping roof duct which isn’t – as you’d assume – an intake for the engine. Instead it simply ducts cooling air down into the bay. Look closely at that and it’s gimmicky.

Everywhere you look there are ducts, slats, vents and channels. Underbonnet storage has shrunk to 38 litres (it’ll take a helmet) so radiator air can be expelled up the bonnet. That one-piece front panel (Cofango is Lambo’s name for it) is a pain to remove.

Elsewhere the tracks have been widened, there’s stiffer suspension bushes, new anti-roll bars and two-stage magnetic ride dampers. The brakes are Brembo’s CCM-R set up, claimed to give a 25 per cent power increase. Sharp at the top of their travel, the 390mm front and 360mm rear discs are fantastically effective and fade-free. A big step on from previous Lambos with carbon brakes, which tend to be dead underfoot with little initial bite. These are easy to modulate, but like to be worked hard.

How’s the rest of the driving experience?

Lambo isn’t wrong about this car’s track-first ethos. The last car I drove on-road that constantly bombarded me with every race car signal it could muster was the McLaren Senna. If you buy one of these and drive it on road, well, best of luck to you. There’s loads of road and tyre noise, the suspension is very stiff at low speeds and unsettled on roads that are only moderately uneven. It’s raucous and distracted, shows no willingness whatsoever to bow to your demands, doesn’t have the compliance and smoothness of our favourite Huracán, the Evo RWD.

It feels a more serious and circuit-capable bit of kit than any Lamborghini I can remember driving. It’s better balanced than the Aventador SVJ, purer than the Performante. It’s very communicative through the suspension and chassis and although the variable ratio steering doesn’t have bundles of natural feedback, there’s so little suspension movement that you feel directly connected to the crisp edge of the front tyres.

It’s very agile, responds sharply to every control, but the calibration of everything is, for the most part, very good indeed. The honest truth is that even though it’s not 4WD, it could probably cope with more power, but if that meant not having this engine any more, forget it. The response and soundtrack is just too special to overlook. It continues to be the highlight of this car. Even though it’s actually too loud. Yes, really. When the exhaust baffles open at 4,700rpm you wince, aware that a) everyone within a mile radius knows exactly what’s going on or b) you’re about to get kicked off your track day. Trumpeting magnificence, but also rather obnoxious. But then look at this thing – at least the soundtrack and bodywork back each other up. And is it just us, or do we detect some Sesto Elemento influence in the STO?

Hmm, good point, although at least this one has made it into production.

“Don’t let that drama, stridency and raucousness deceive you. Underneath, the STO really knows its way around a circuit”

In due course Lamborghini will announce a Nürburgring lap time for the STO. For a while back in 2017, the Performante held the production car record at 6mins 52secs. Since then the Porsche 911 GT2 RS and AMG GT Black Series have gone faster. Expect the STO to redress that situation – although as ever, take all times with a pinch of salt.

But yes, the STO does fulfil Lambo’s ambitions for it. This is a Lamborghini that wants to be on track, that feels like a racer, just one with the heavy dose of charisma that makes a Lamborghini what it is. But don’t let that drama, stridency and raucousness deceive you. Underneath, the STO really knows its way around a circuit. If you don’t take yours on track, you’re missing the point of it. 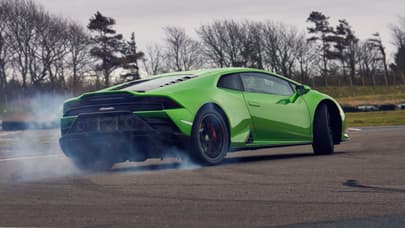 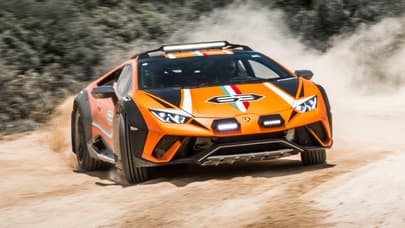