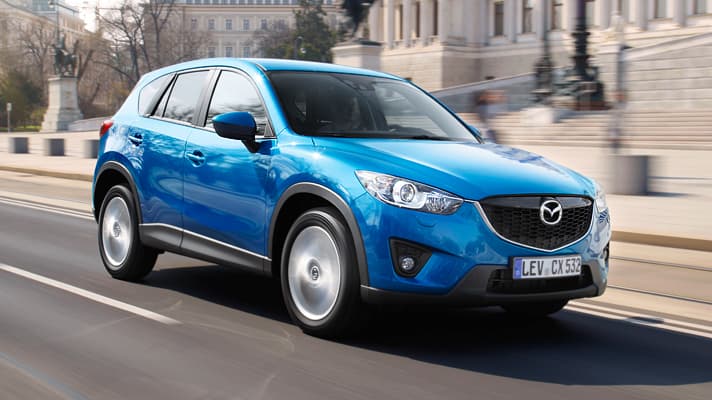 I misjudged the Mazda CX-5 before I drove it. I saw the prices (which start at a far from uncheap £21,395) and was prepared to declare it an excessively expensive Nissan Qashqai rival.

But I got it wrong. This is a bigger and more accomplished machine than I anticipated. Think Ford Kuga, VW Tiguan, even Land Rover Freelander. Already looks better value, doesn't it? And underneath there's plenty to talk about. As you might be aware many new cars carry over old tech - engines, gearboxes, even the platform - but the CX-5, Mazda's first compact SUV, features an entirely new platform, unique engines, two all-new gearboxes and is even the first recipient of Mazda's new ‘Kodo' design language.

So the CX-5 is a showcase for Mazda, and it needs to be. Mazda is a relatively small player in the industry and is looking a bit stagnant alongside the pushy Koreans. The RX-8 has been killed off, the Mazda2 supermini is underrated and should have been pushed harder and the facelifted Mazda3 is, well, mediocre.

The CX-5 is much better. It's a neat looking thing, not as dramatic as an Evoque of course, but tautly sculpted and with some interesting character lines. And it's big: over four and a half metres long, and larger all round than either the Tiguan and Kuga.

Mazda hasn't thrown away this advantage inside either. It's best described as capacious. Masses of room for people in the back, and 503 litres of load bay at your disposal, plus seats (40:20:40 split) that fold individually at the pull of a lever. Drop ‘em all for an almost completely flat 1,620-litre area. That's exec estate-sized, holiday-sized. Doesn't look that big from outside, but is. Good.

Now, the engines. Mazda is trumpeting it's new Skyactiv technology. The technology is interesting, but it's also quite complex, so I'm going to compress it here. The new 165bhp 2.0-litre petrol isn't worth bothering with. Yes, the bewilderingly high compression ratio (14:1) has helped ensure it's impressively economical (a claimed 47.1mpg), but it's actually noisier than the new 2.2-litre diesel and lacks the torque of turbocharged rivals.

The oil-burner, predicted to account for 85 per cent of sales, is a force to be reckoned with, though. It's remarkably smooth-revving, and even the lower powered 150bhp version is plenty quick and torquey enough. Best of all are the figures involved: 119g/km of CO2, 61.4mpg, 280lb ft of torque and able to see off 0-60mph in 9.2 seconds. It's the one to have - you don't need the high power 175bhp/310lb ft version.

Nor, controversially, do you need 4wd. OK, some of you might, but it lops the best part of 7-8mpg off the economy figures and can only send up to 50 per cent of torque to the rear wheels. In normal driving it's 100 per cent front.

The bigger choice is between manual and auto gearboxes. Both are new, both have six speeds and both are good. Especially the auto. It's not a twin clutch, but for a torque converter the shifts are quick, smooth and impressively free from slurring. Just stick it in D and it has an uncanny knack of being in the right gear at the right time. Just bear in mind that it doesn't have the economy advantages of a twin clutch: economy drops from 61.4mpg to 53.3mpg and CO2 rises by 20g/km. Just as well the manual is so good-natured, then.

And it drives well, too. Really well. Mazdas have always been that bit more dynamically polished than most mainstream rivals, and the CX-5 is no exception. A lack of noise is the first thing that strikes you - not just from the diesel as it hums it's way to the far side of 5,000rpm (although there's little point going beyond 3,500rpm) - but from wind and road, too. You can settle comfortably into a rhythm in the CX-5, enjoy the ease with which it tackles poor roads, the impressive body control (better in Sport models with 19-inch wheels, than in 17-inch equipped SE-L versions) and a ride that, although not the softest, strikes a happy medium.

It has a balanced approach to corners, is enthusiastic about going around them and covers ground with aplomb. It's all rather... professional. Easy. Actually quite fun. If you're in the market for a compact SUV, this really is a very nice one to live with and drive every day.

One drawback: the interior. It's just not up to scratch, I'm afraid, neither in terms of design, nor materials. It's too ordinary, too plain, and although all models come with a high level of standard kit (dual zone climate control, Bluetooth, cruise control, USB and iPod connections on the base version) and there's little to fault in terms of ergonomics, seat comfort and the like, the cabin is not an interesting place to spend time, the plastics aren't special enough, and some bits (the airvents and buttons to adjust the clock, for instance) look cheap.

But this isn't enough to undermine the CX-5. It really is a fine addition to the compact SUV ranks. Rather late getting there, but Mazda's aims of gaining a mere three per cent market share (4,000 cars in the UK this year) looks modest. It gives the brand some much-needed pep, but this is momentum that needs to be sustained.