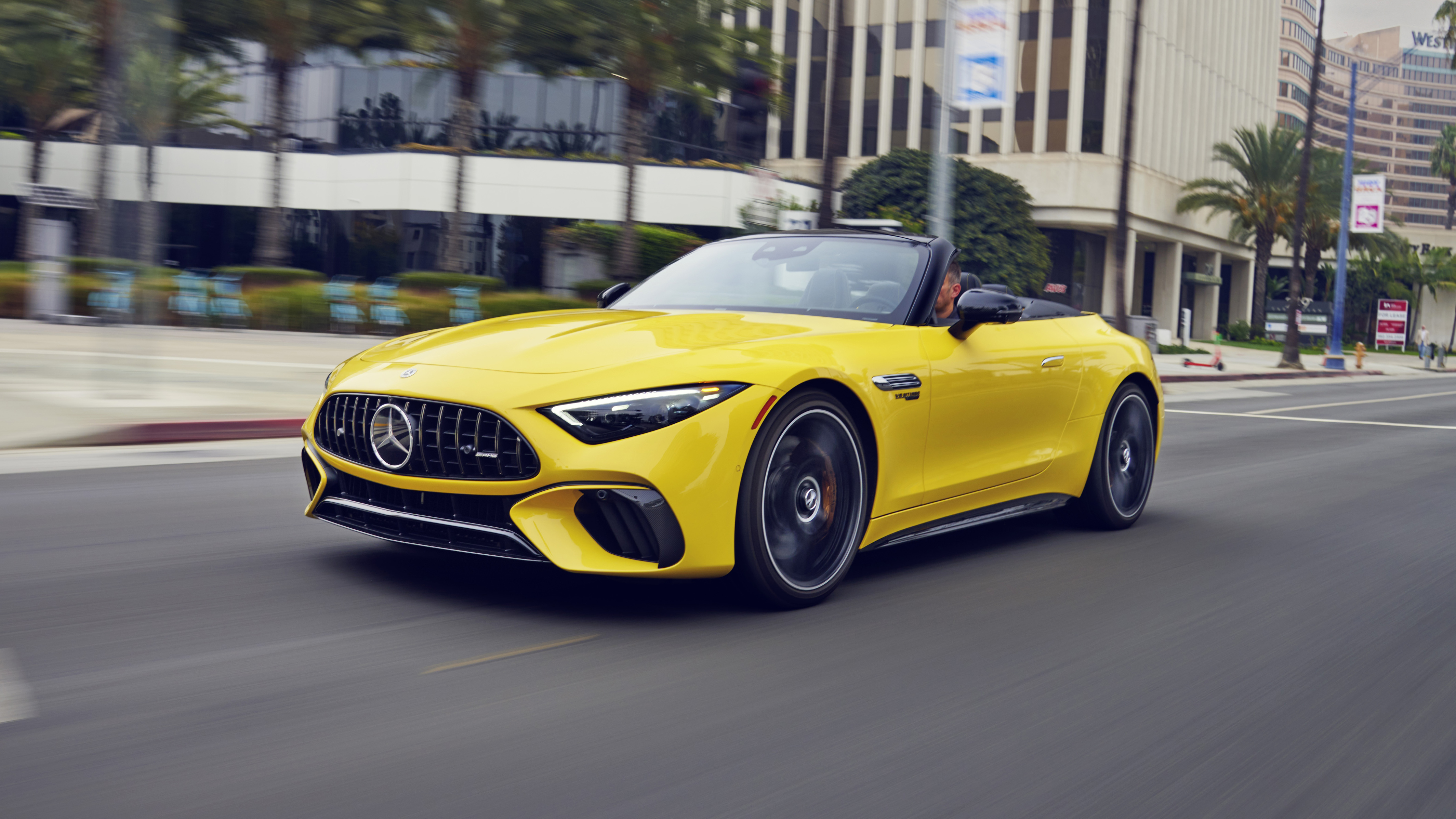 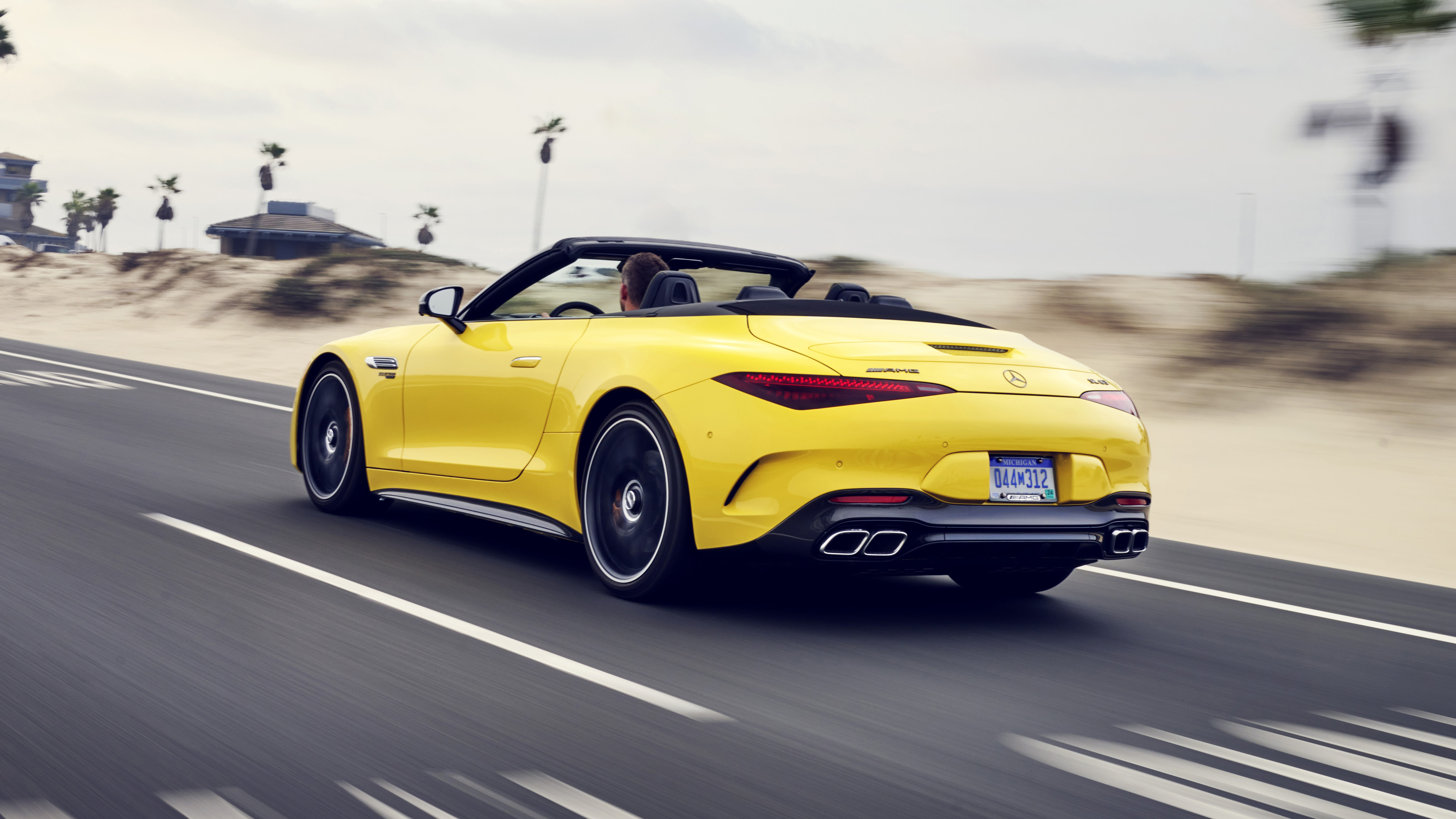 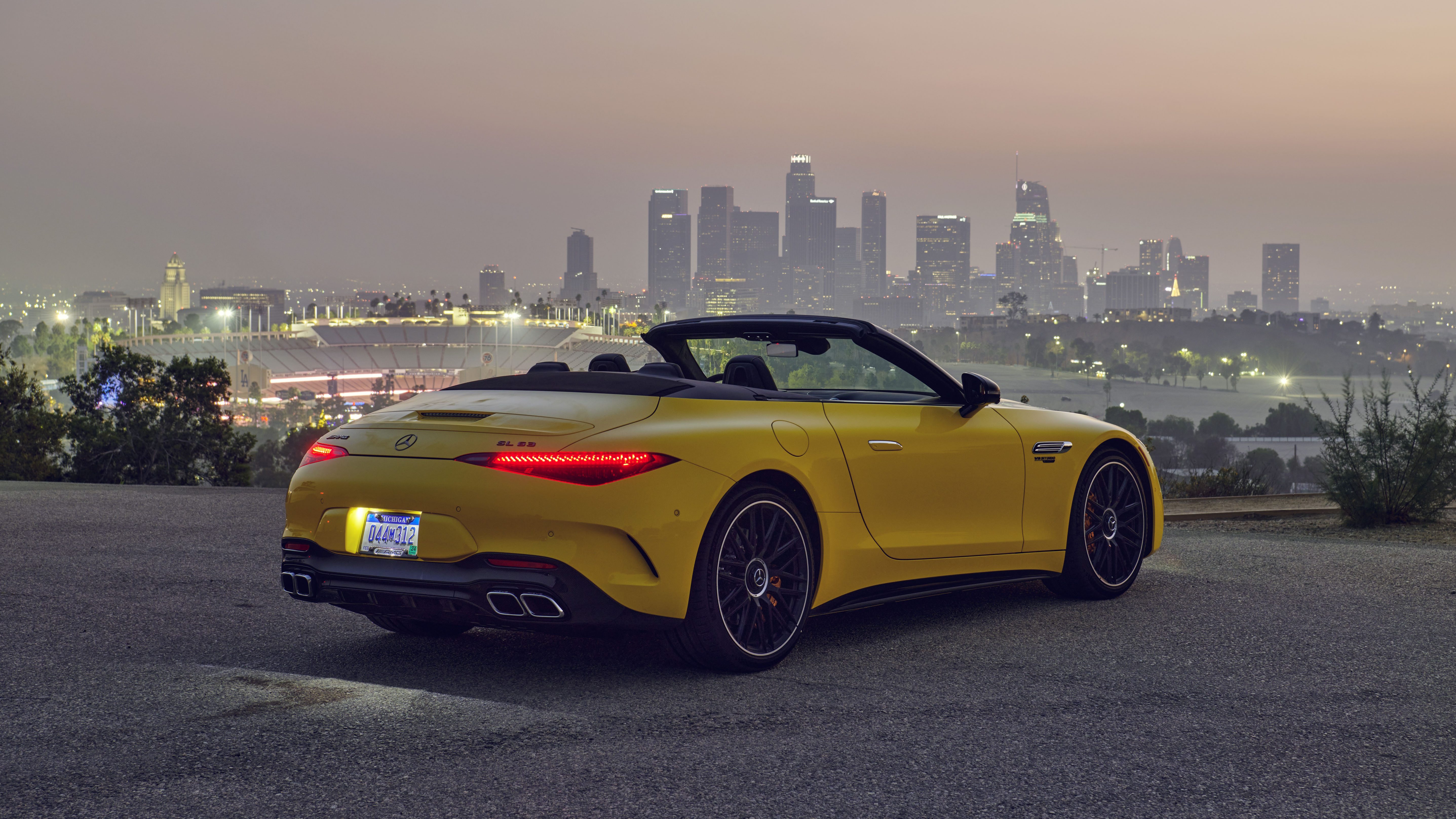 Even for a marque as venerable as Mercedes-Benz – it pretty much invented the motor car – the SL badge still packs a significant emotional wallop. Most histories suggest it stands for ‘sporty’ and ‘light’, two commodities cherished by car fans but that have been largely forgotten in the 21st century technological arms race. Touchscreens trump pretty much everything else, obviously.

It’s certainly been a while since the SL could truthfully claim to be sporty or light. The new car is the seventh generation and aims to redress the balance. The blood-line is mostly that of an automotive aristocrat. The original arrived in 1952, a post-war competition car whose signature gullwing doors and radical engineering presaged a thrilling road version, and then a slightly less thrilling one.

The model that followed, known colloquially as the ‘Pagoda’, was as effortlessly elegant as any car in history. Generation three arrived in 1971, more of a lover than a fighter, and soon to be enshrined in camp American television behemoths such as Dallas and Hart To Hart, though Richard Gere’s American gigolo matched his with the finest Italian tailoring (Armani, since you asked). The late Eighties-into-Nineties car remains a modernist masterpiece, and one of the best cars esteemed Merc design supremo Bruno Sacco presided over.

Since then, well, maybe not so much, saddled as it was with an unwieldy folding hard-top roof and lardy chassis. Lately, the SL has had the aura of fallen hero, pushed to the margins of the sprawling Mercedes range and left to brood. Now it’s centre-stage once again.

Pretty much everything. This is the first SL to be developed under the aegis of AMG, which is proof that the ‘sport’ part of the equation is being taken seriously. Its 1,950kg kerb weight, on the other hand, suggests that someone in Affalterbach needs to invest in a new dictionary. Or maybe some new scales.

The SL features an all-new chassis that borrows nothing from any existing Mercedes, and throws all-wheel drive (a first for the SL) and an active rear axle (up to 2.5 degrees) into the mix. It also employs the latest MBUX interior user-interface from the S-Class but with some SL-specific twists, including a distinct cockpit feel, a low-slung driving position and central display that tilts to avoid reflections.

The exterior is the work of Mercedes’ California design studio. It has short-ish overhangs, big wheelarches that eat hungrily into the front wings, slim ‘digital’ headlights, a long bonnet/short tail silhouette, and a body whose form has shades of Porsche 911. It’s good to see the return of the old-school soft-top: as well as a pert rear end, it imbues the SL with a more classically sports car character without being remotely retro. Opening and closing the roof takes 15 seconds and can be done on the move at speeds up to 40mph.

“This is the first SL I’ve designed despite being at Mercedes for so long,” design vice president Gorden Wagener explains. “The 300 SL Gullwing is the blueprint, the car I had in mind when we worked on the new car. That was a UFO when it first hit the market, you know? We started with a blank sheet of paper so we were able to define everything. The SL was always a mirror of the decade it existed in, and this one is the SL of the digital age, an age of transformation. It was important to pick up on the heritage but also make it very technical and forward-looking.”

Not yet. Instead, the new SL arrives armed with two versions of Mercedes’ vigorously internally combusting 4.0-litre ‘hot V’ V8 twin turbo. The SL 55 makes 469bhp, delivers 516 torques, gets to 62mph in 3.9 seconds and can do 183mph. The SL 63 has 577bhp, 590 torques, takes just 3.6 seconds to dispatch 62mph and tops out at 195mph. Originally excluded from UK sale, it now will be coming here. The entry-level car is the SL 43, powered by a 3.0-litre, 385bhp V6, good for 383lb ft. A plug-in hybrid and fully electric version are incoming although there will be no EQ-badged SL.

“A car of impressive abilities, the Mercedes SL combines real performance with GT-like refinement and tech”

The SL is a Mercedes of typically impressive bandwidth, incredibly intelligently engineered but not unemotional, as befits its hedonistic remit. It’s arguably the most genuinely sporting SL since its Fifties forebear, and reverses the model’s decades-long drift into gently opiated waftiness. Although much less aggressive than its uncompromising AMG GT sibling, the V8 engine is still such a presence that it’s possible the less vocal six-cylinder engine might actually be the best bet (we haven’t driven it yet). Regardless, the SL has successfully recaptured its stylish essence, while tapping into Mercedes’ universe of connectivity and tech.