£1209 p/m
External link to
with Leasing.com
Read why you can trust our independent reviews
Top Gear Team
Published: 04 Oct 2022
Skip 17 photos in the image carousel and continue reading 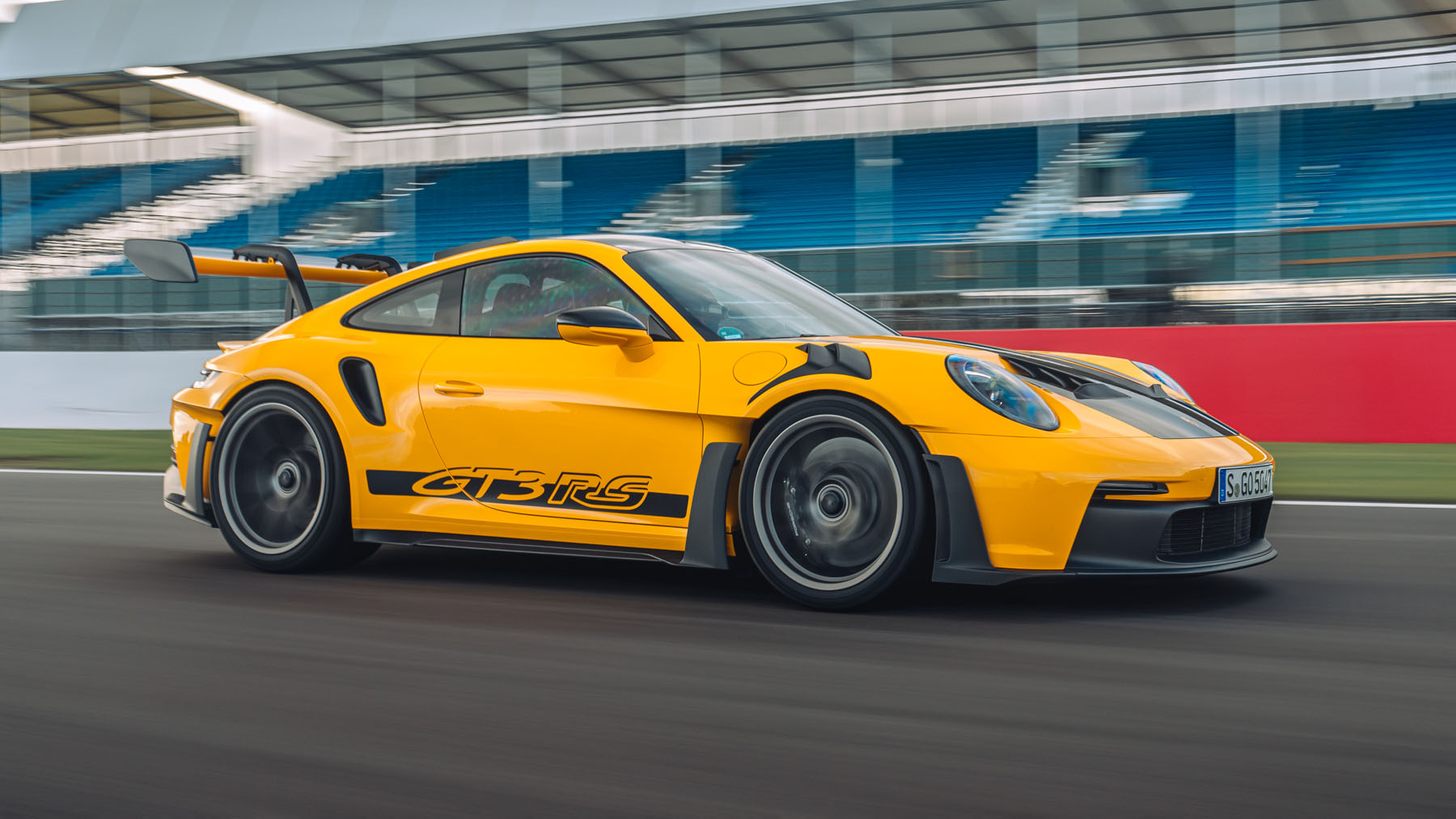 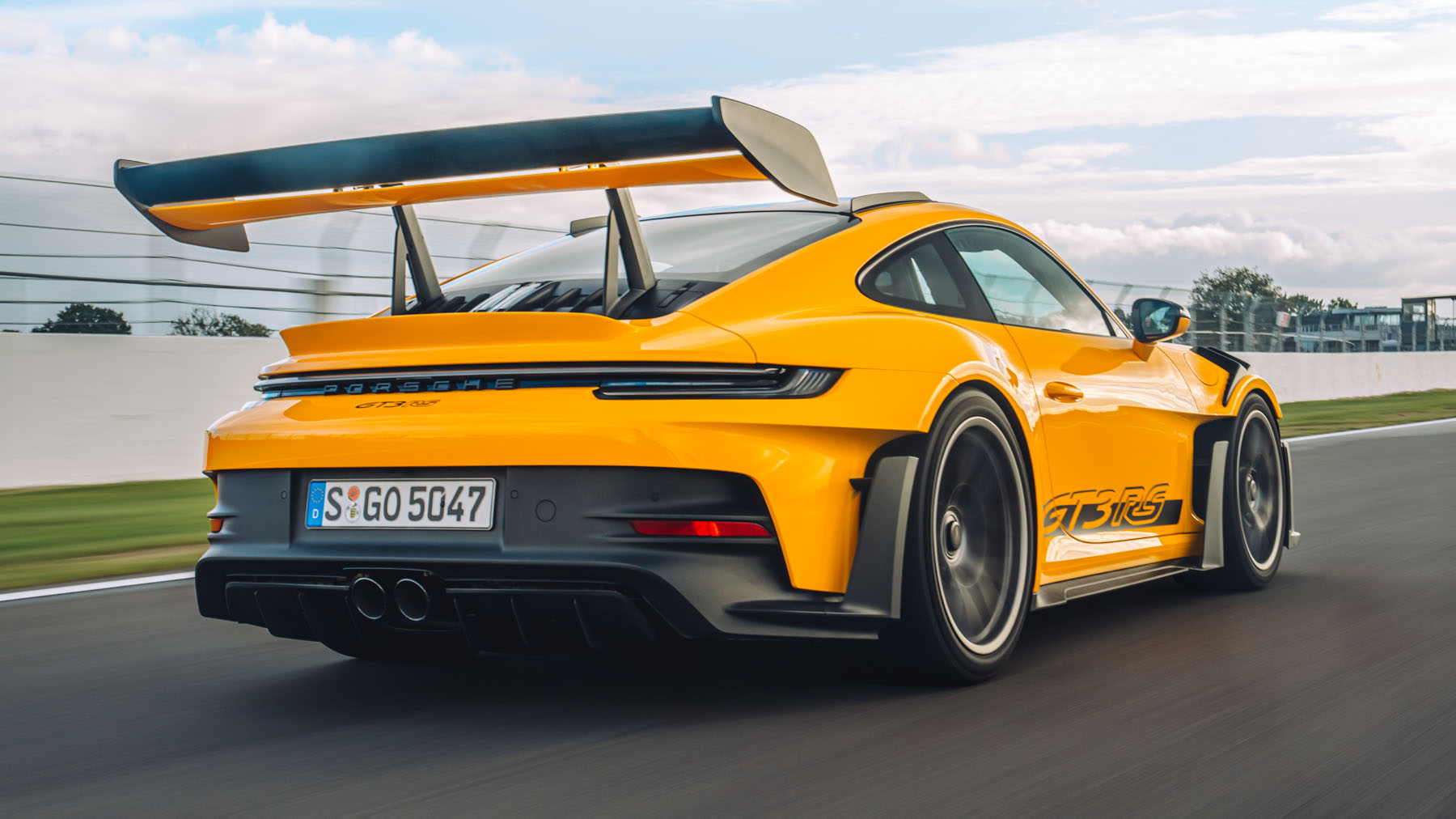 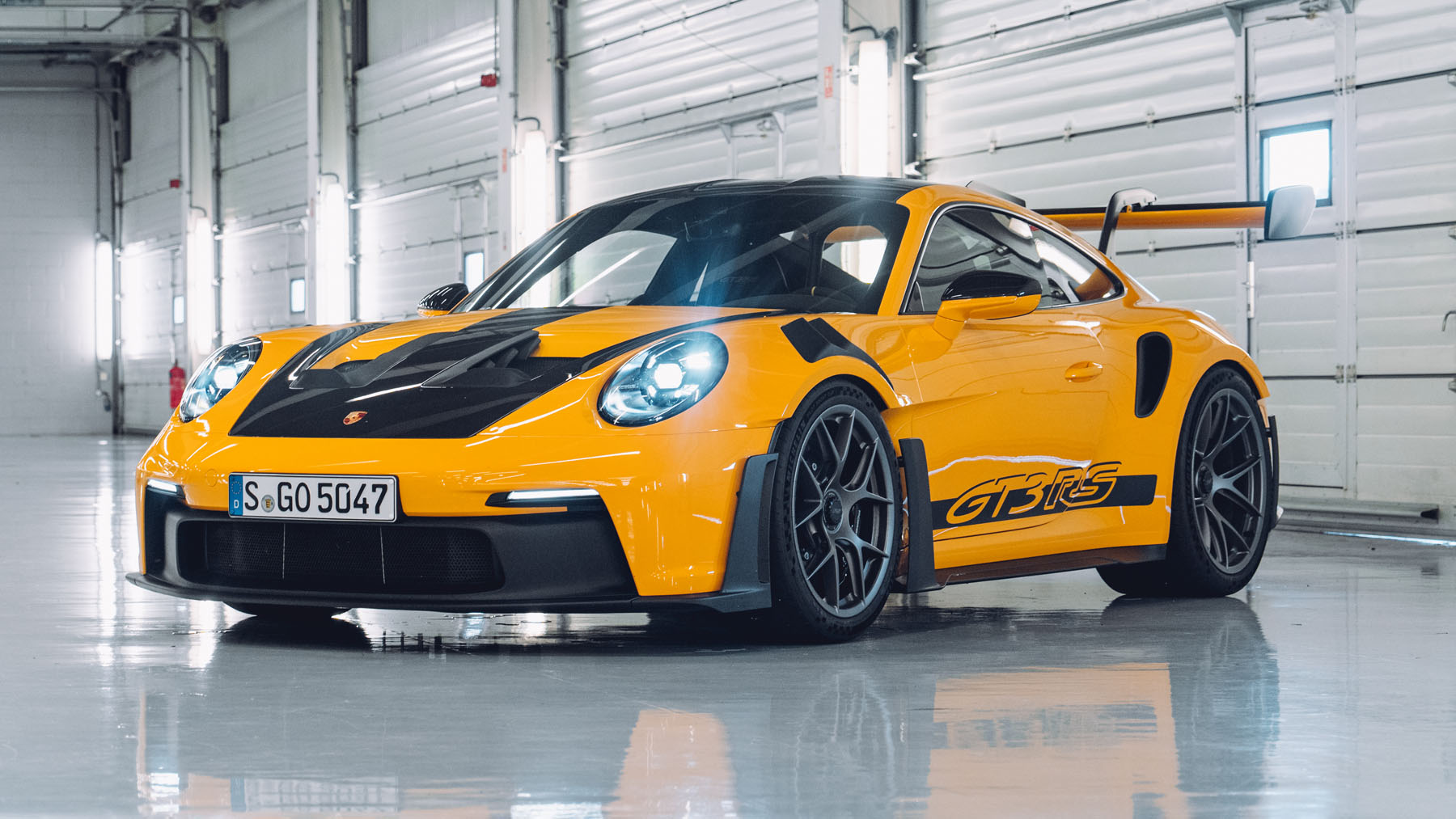 1 / 17
Advertisement
“The most extreme Porsche 911 ever, a fitting no-stone-unturned exercise in the pursuit of speed ”

Extraordinary cornering wizardry, not hung up on power

The most extreme Porsche 911 ever produced. This new GT3 RS isn’t just inspired by motorsport, it’s a full-blown race car, albeit one with numberplates that’s been engineered for user-friendliness and accessibility for mortals on road and track. Relatively speaking. Exactly 50 years since the 2.7 RS started the 911 RS story, it’s a fitting no-stone-unturned exercise in the pursuit of speed.

Downforce – as the feast of holes, wings, cutaways and vents suggest – both creating it and bleeding it off. The raw figures are astonishing: 860kg of downforce at 177mph and 406kg at 124mph, well over double those of the 991.2 GT3 RS it succeeds. And yet, thanks to moveable flaps in the front spoiler and a hydraulic DRS-style element in that huge swan neck rear wing, that can be dialled back to 306kg at 177mph in an instant. So, massive grip when you need it, less drag when you don’t.

The aero package required to pull this off is a triumph of attention to detail. Instead of three radiators in the front bumper – as per every other 911 in the range – the GT3 RS has one massive forward-leaning radiator inspired by the RSR and GT3 R racers. Downsides? You lose any storage in the front trunk. Upsides? Space is freed either side for those moveable underbody vanes that are constantly adjusting and working with the rear wing and diffuser to keep the aero balance 30 per cent front, 70 per cent rear.

Problem is, the radiator wants to shoot hot air straight out of the bonnet nostrils over the roof of the car and into the engine intakes on the rear deck. Not good. Naturally aspirated engines like cool, dense air, so those black fins on the bonnet usher the warm air out to the sides, and those blades on the roof stop it sneaking back towards the engine. Is it worth it? Well, the difference between 20 deg intake air versus 30 deg is a loss of 15bhp, so Porsche says yes it is. All those holes and vents around the wheels are designed with one purpose, too, to extract air from the arches and reduce lift.

Let me guess, it’s got monster power too?

No, actually. There have been gains, but gentle ones. The engine is a 4.0-litre naturally-aspirated flat-six revving to 9,000rpm and producing 518bhp, mainly thanks to hotter cam shaft profiles, but that’s only 15bhp more than a current-gen GT3 and only 5bhp more than the previous gen GT3 RS. Refreshing, isn’t it, in this age of easy access turbocharged and electric grunt, that Porsche has kept power pretty much constant, and focused its attention elsewhere. Like on the seven-speed PDK gearbox which gets a shorter final drive ratio than the GT3, or the wing-profiled wishbone suspension arms that contribute 40kg of downforce at top speed. But worry not, this is still not a slow car - 0-62mph in 3.2 seconds and a top speed of 184mph (14mph slower than the GT3-with-wing) are enough to be getting on with.

Presumably some lightweighting has occurred?

Correct, but not before some additional weight was added. Next to a GT3, the hydraulic two-piece wing, the 911 Turbo body, the active aero in the front bumper and the wider track and fatter tyres all pile on the pounds. That podge is counteracted by optional magnesium wheels, the single radiator layout and carbon fibre for the wing, roof, doors, bonnet and front wings. The resulting kerbweight (with all the lightweight goodies) is 1,450kg, 15kg more than an equivalent GT3. Not bad considering it’s got the full canon of driver aids including rear-wheel steering, and adjustable… well everything. More on that in a bit.

When we first clapped eyes on the GT3 RS, we hid behind the sofa through fear of being headbutted. It’s a challenging, brutal shape to look at, but spend some time with it and it wins you over with its uncompromising form and cartoonish proportions. It also looks good in pretty much any colour we’ve encountered. Don’t believe us? Proceed to the configurator immediately. During the launch event at Silverstone, Porsche had one parked up next to all five previous-generation GT3 RSs and it’s a different, genetically-modified breed. The others are 911s with wide bodies and wings… this is a freak.

Should we reserve judgement until we’ve driven it on the road? Nah. Lord knows how many racing miles 911 GT3s have racked up over the years and across the generations, but what we have here is an absolute masterclass in aero and chassis dynamics. We salute the fact that Porsche didn’t simply hike the power output, and chose instead to max out on other areas of the 911’s repertoire. There really is nothing else like it: a recent ‘Ring lap attempt had to be called off when the weather turned nasty, but brace yourselves for something outrageous when it does happen. The GT3 RS is no oil painting, but you won’t worry about its form given how well it all functions. You’ll need to bring your A-game, though. It deserves it.