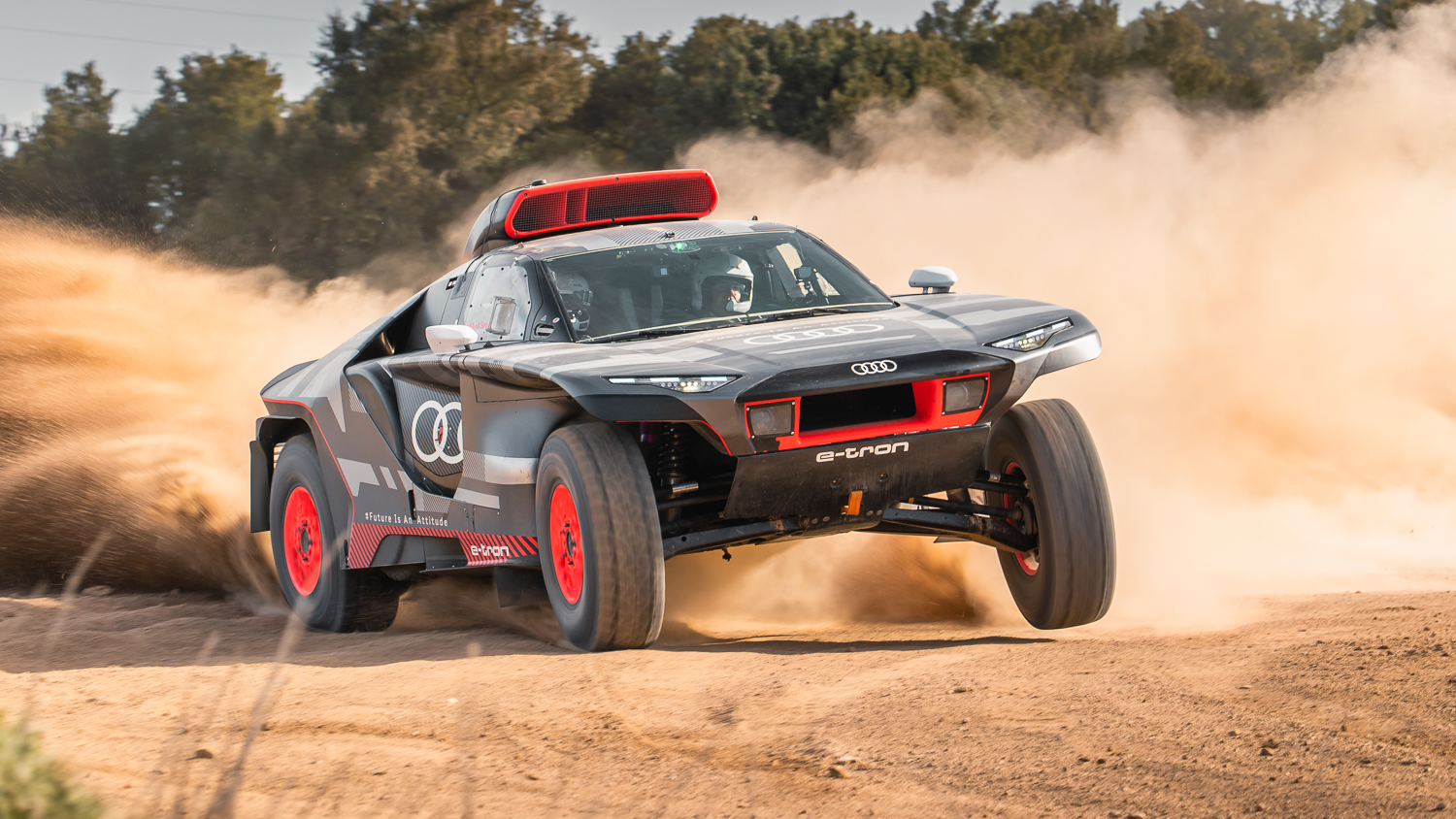 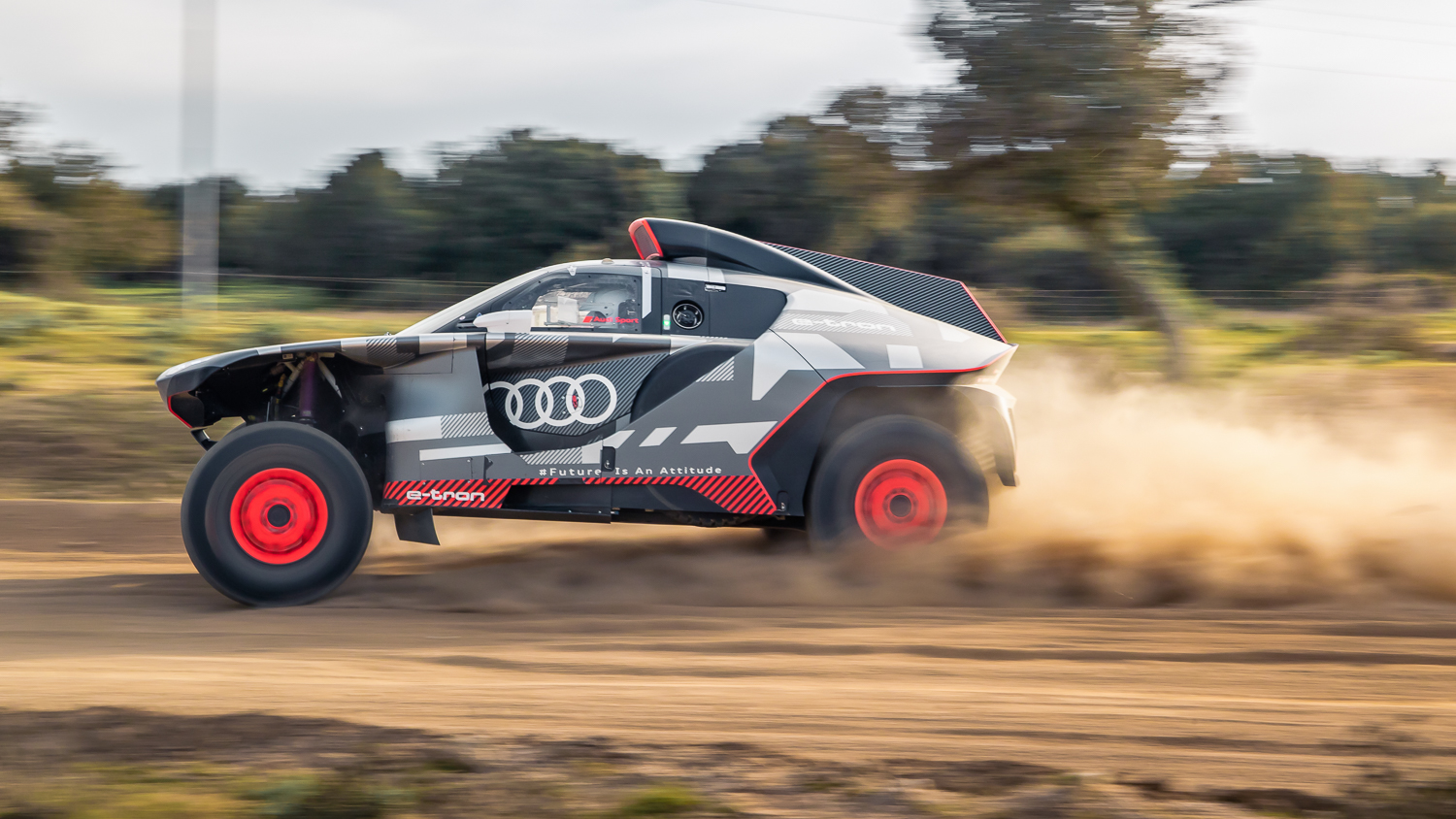 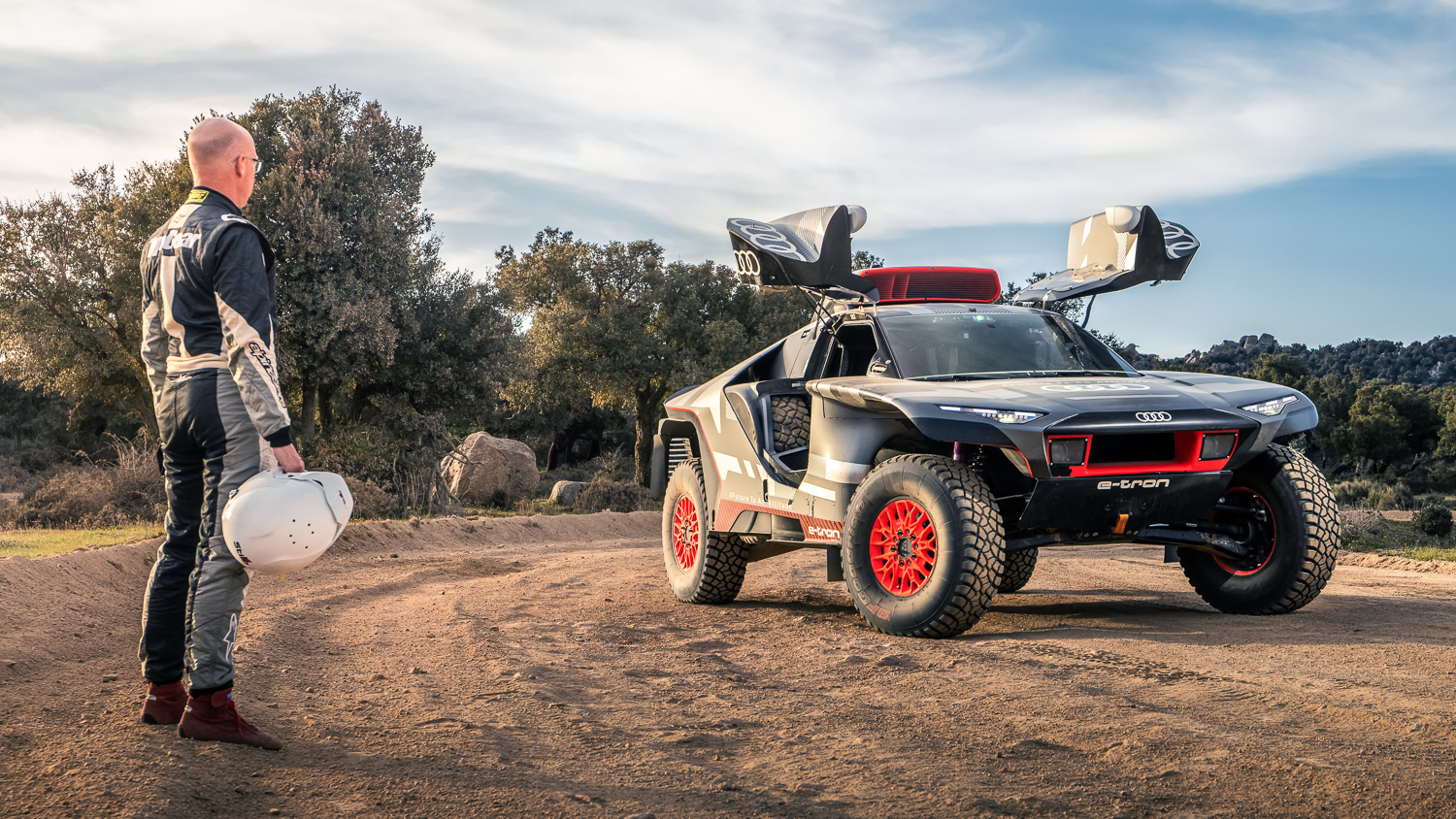 The Audi RS Q e-tron. Catchy name, how did they come up with that one?

They stuck all Audi’s brand lettering in a Scrabble bag, gave it a shake and tipped it out. Sporty, 4WD, electric. Kind of tells the story when you think about it, but it also allows Audi’s marketeers to park this next to anything in their road car product range and draw comparisons.

Ah I see. Come to think of it Audi’s product range is packed out with pseudo-sporty, overweight SUVs boasting some sort of electric guilt-easing tech.

Yeah, and so is everyone else’s. Welcome to 2022. Audi’s just managed to legitimise theirs with a motorsport strategy, creating a car that genuinely can go off-road and uses some actually-very-interesting and relevant tech.

Before we get on to that, what on earth is it for?

The RS Q e-tron competes in the FIA World Rally-Raid Championship. But like Le Mans being part of the FIA World Endurance Championship, there’s only one event that matters and everyone has heard of: the Dakar rally. Despite the shifts in location, plus shorter stage and event lengths it can still legitimately be called the ‘Toughest Race on the Planet’. Two weeks, over 8,000km through desert, rock, sand etc.

The RS Q competed for the first time this year, winning four stages. It’s at least a 3-4 year project for the team – the aim is to win, beating the Toyotas and Prodrive’s BRX Hunter. They all use conventional petrol or diesel engines. Audi wants to show there’s another way.

Go on then, tell us how it manages to cover 8,000km on pure electric.

Yeah, The RS Q e-tron is a hybrid. Audi designed and built it from scratch in 16 months, which meant plundering conventional track technology and taking it out to the desert to see if it could cope with the battering.

All drive to the wheels is electric. Each axle is powered by an electric motor from a Formula E car, and they get their power from a 50kWh battery pack. That in turn is topped up by another Formula E motor, and that motor is driven by a petrol engine that used to be found in Audi’s RS5 DTM car. It’s a 2.0-litre turbo and it slurps from a 300-litre on-board fuel bowser.

Quite the chain of command there, turning petrol into electrons to turn the wheels. Surely it would be more efficient if you just removed the electrics all together?

Not so. Remember the energy efficiency of an electric system is over 98 per cent (very few petrol engines better 50 per cent), so electric drivetrain losses are minimal. You’ve just got to carry the battery weight. Plus the petrol, because it is only acting as a generator, isn’t being used hard. It just drones away by itself at around 4,500-5,500rpm, meaning it uses around 40 per cent less fuel than ICE rivals. Computers decide when it should be switched on and off. One less thing for the driver and co-driver to worry about.

Carlos Sainz Sr (clang) told me “the biggest advantage, especially in the dunes is that we don’t have a gearbox, and torque is always instant”. Carlos, two-time world rally champion, three-time Dakar winner, now 60, manages to embody two very separate facets: dashing and teak tough. He also has something I’ve found in all Dakar drivers, a far-away look, as if the desert is reflected in the back of their eyeballs. He’s a fan of electric power for Dakar, but like everyone else on the team wishes the organisers would allow them to uncork the RSQ properly. To ensure a level playing field, it’s limited to 400bhp, but the two motors have 670bhp potential.

Hang about, you drove it with Carlos Sainz?

He had better things to do than sit next to me while I drove his car. But it was his car. Audi has only built four of these: three race cars (for Sainz, Stephane Peterhansel and Mattias Ekstrom), plus a spare.

In fact the cars have been built around the drivers. Audi recruited the crews, and designed the car to fit them. They’ve all bought in for the duration. And take it from me, you couldn’t shoehorn a six footer in here. For a car that’s so big outwardly, it’s tiny inside. And clambering in requires a particular choreography of movements, footwork, positions and grabs.

Once in and locked back into the deep seat it feels safe and enclosed. Carlos had assured me “the car is very easy to manage, super easy”, but there’s the usual plethora of unrecognisable buttons, a hectic steering wheel and complex screen graphics. But he’s right, once through the start-up sequence (cue frantic electric whining) there’s just two pedals, the wheel and a button on it to select between Forwards, Neutral and Reverse.

Simple stuff. What was it like being in it?

I was amazed at the forward visibility. From outside the high front makes the RS Q look like it’s in a constant hover (a spaceship vibe that the gulping roof vent and central fin do nothing to diminish) but inside you sit so high and the cutaway windscreen is so low, that the downward view is superb. Essential for seeing over dunes. And for feeling like you’re surfing along five feet above the track. Which in a sense you are.

Wait, where did you drive it?

Sardinia, on the corking little Loelle rally stage near Budduso, high on the inland plateau. Way tighter than anything the Dakar normally offers, but just the place to lob it around and see how it behaves.

A fair few things, most relevantly Prodrive’s BRX Hunter (although that was at Dunsfold) and Mini’s Countryman Dakar contender from about eight years ago. The former was hilarious, huge, mechanical and predictable, slithering around all over the place on wet tarmac, the latter was the harshest, most physically demanding race car I’ve ever driven. At the time the regs only permitted 250mm of wheel travel. Now that’s up to 350mm plus the 37-inch tyres are much bigger.

It’s a very different prospect, soft and languid. There’s considerable initial roll, but as you fall through the travel it supports itself better, takes up a stance and then holds it. It’s heavy, but manages that weight so well that you can make it dance. It just needs a bit of time and space – rush it and it becomes ponderous. Move at its pace, use the weight to your advantage and it’s surprisingly graceful. The movements, the scandi-flicks, using momentum and so on, are just like in a WRC car, but it’s basically a tonne heavier, so things take longer to happen.

Come to think of it, how heavy is it?

About 2,150kg. The class minimum limit is just below 2,000kg, so the RS Q is overweight. And that figure is before you add fuel, most spares and the occupants. It can weigh 2.7 tonnes on the start line. At Dakar back in January the engineers were hopeful of reducing weight to make the RS Q more competitive. Now they seem sceptical they can achieve that, and may petition to be allowed more power. Not sure that’s going to fly given the RS Q’s stage pace was already on the money.

Can’t be that fast in a straight line, though?

The power-to-weight ratio is similar to a Golf GTI, but in ideal conditions Audi claims a 4.5secs 0-62mph time. That’s electric torque for you. Top speed is limited to 112mph for all competitors. Raw speed is not its forte. Response and torque are what gives it the advantage.

Pitch it into a corner, hit the throttle and the tail slews out. It’s 4WD obviously, but there’s no physical link between the axles and the torque distribution can’t be varied. I’m guessing it’s around 40:60. But the throttle mapping can be adjusted and on this evidence Carlos likes a car that oversteers. But I’m obviously not as confident as him on the throttle, so mid-corner it begins to come back into line. When I see the exit and boot it again, the tail arcs wide and I’m throwing lock at it again.

Is it comfortable on board?

Because you’re high you’re exposed to the pitch, dive and roll, but the sensation is one of gliding along, the surface a long way below you. You barely feel a thing. I know this because I got carried away and started cutting corners and clipping edges. Including one that had a big rock tucked in the undergrowth. I only knew it was football-sized when I walked the track afterwards. In the cockpit there’d been a thump and kickback from the inside front wheel, but nothing particularly alarming. There’s the Audi RS Q’s forte, consuming terrain, soaking up hard punishment and generally making the impossible possible.

Are you fighting it in the cabin?

Absolutely not – it’s very friendly. OK, it’s squealing and wailing like it’s in pain, but the control inputs are small. The steering is superlight (to lower driver effort on long stages), the throttle is super-accurate, there’s no gears or power band to worry about, and although the brakes are a little vague initially (the majority of the braking is electric regen), you get used to them.

Has it got a hydraulic handbrake?

Yeah, and it’s delicious, able to kick the back end wide at will. It’s a one yank hero mode. I learn what the motors are doing by interpreting the electric noises and, dust billowing and churning, wheels skipping and pummelling the terrain into submission, I’m having a total, utter blast.

And then a wheel bearing blew. Or maybe it was the diff. Either way, something catastrophic. It takes me several moments to realise the actual cause: the DTM engine has just burst into life. It’s not an exciting noise, this flat monotonous throb – in fact it sounds like one of those refrigerator units on a big HGV.

Apparently all the drivers had difficulty adapting to it at first – the instinct to listen to the engine is hard-wired into us. But here’s an engine that does exactly the same thing no matter what I do in the car. And starts and stops at will. It might shut-off mid-corner, making me think I’ve lost all drive, or most disconcertingly of all, fire up as I’m braking.

Hold on, can it charge up faster than you can get rid of it?

It can. Although my driving included lower speed laps for car-to-car photography, pauses while cameras were moved and so on, when I went out on track I had 47 per cent charge, and when I came back in that had risen to 83 per cent.

I know this is totally irrelevant for a competition car, but for pure fun the BRX Hunter has a sense of mechanical connection that’s beyond the Audi. In that, tugging gears through, twin turbo V6 howling, I was hooting with laughter. But point me at a desert stage several hundred kilometres long, and I’m taking the one that’s easier to drive, gives me more brain space to concentrate on the driving and the terrain.

I completely get the advantages of electric for Dakar, I like the messaging of it and hope Audi can get the result it wants from its participation. The mad spaceship looks are wild, the noises and sensations are equally out there, but most of all I think the RS Q e-tron is doing an important, relevant job: proving that the most gruelling motorsport event on earth can have an electric future.