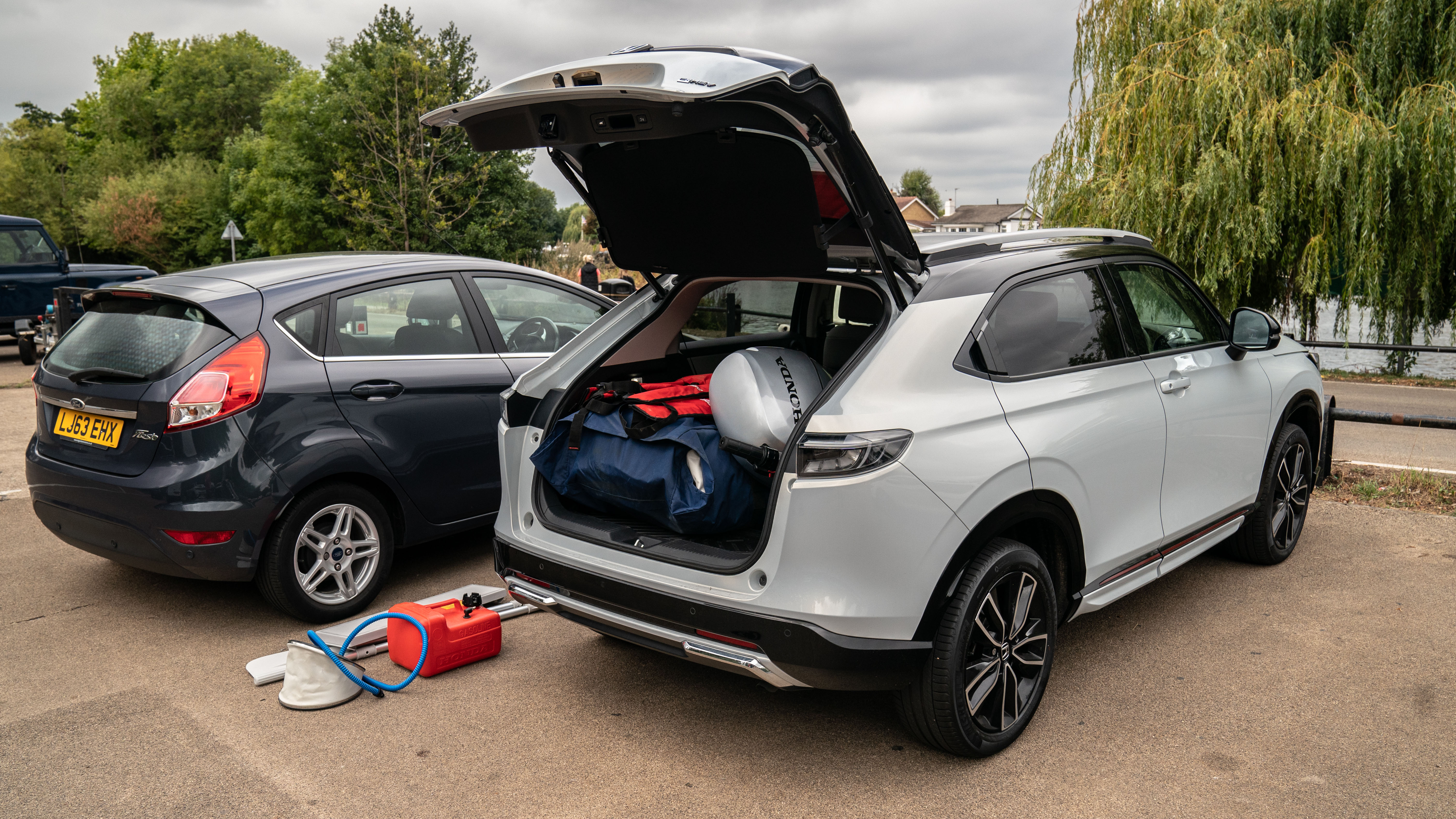 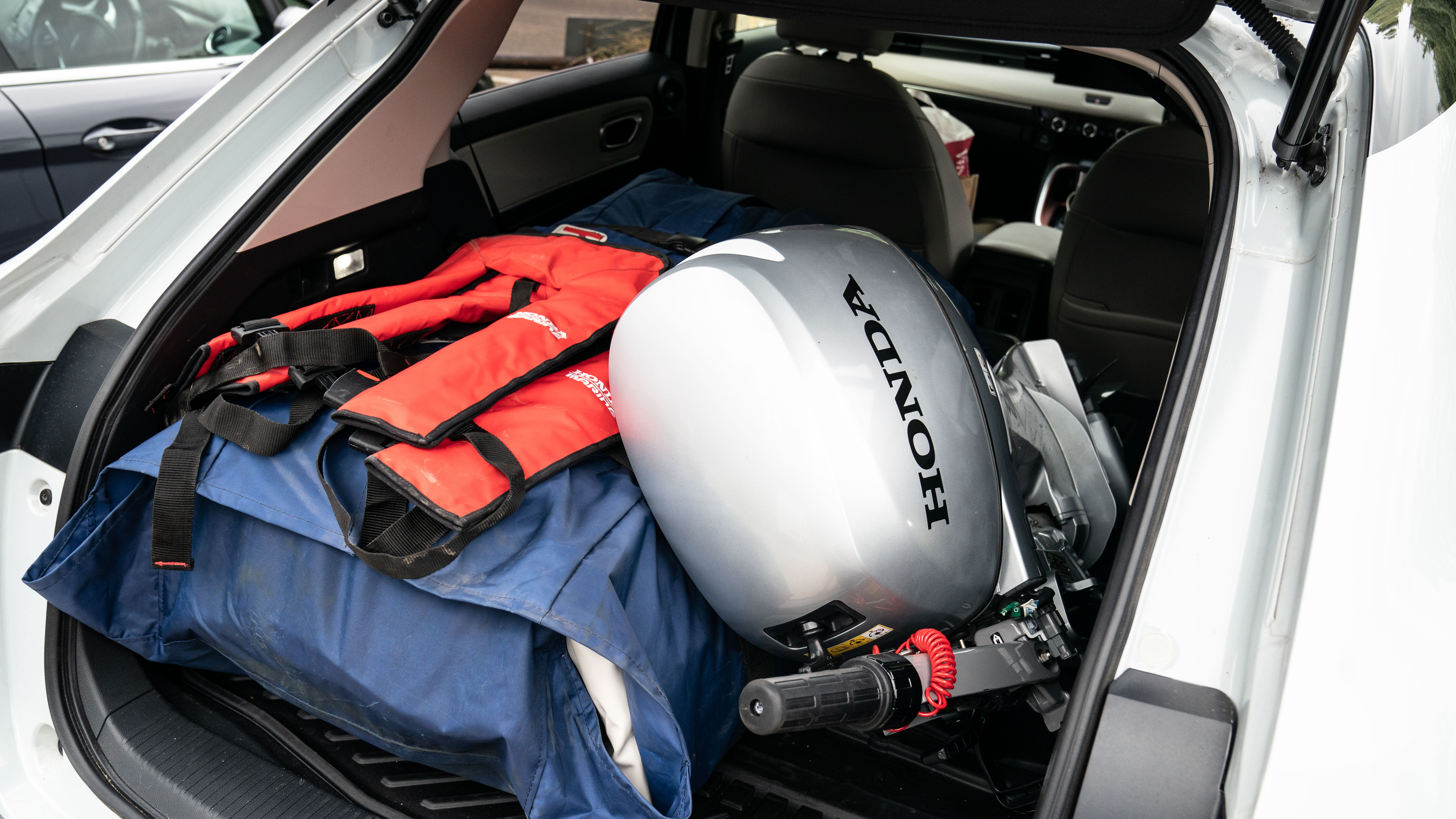 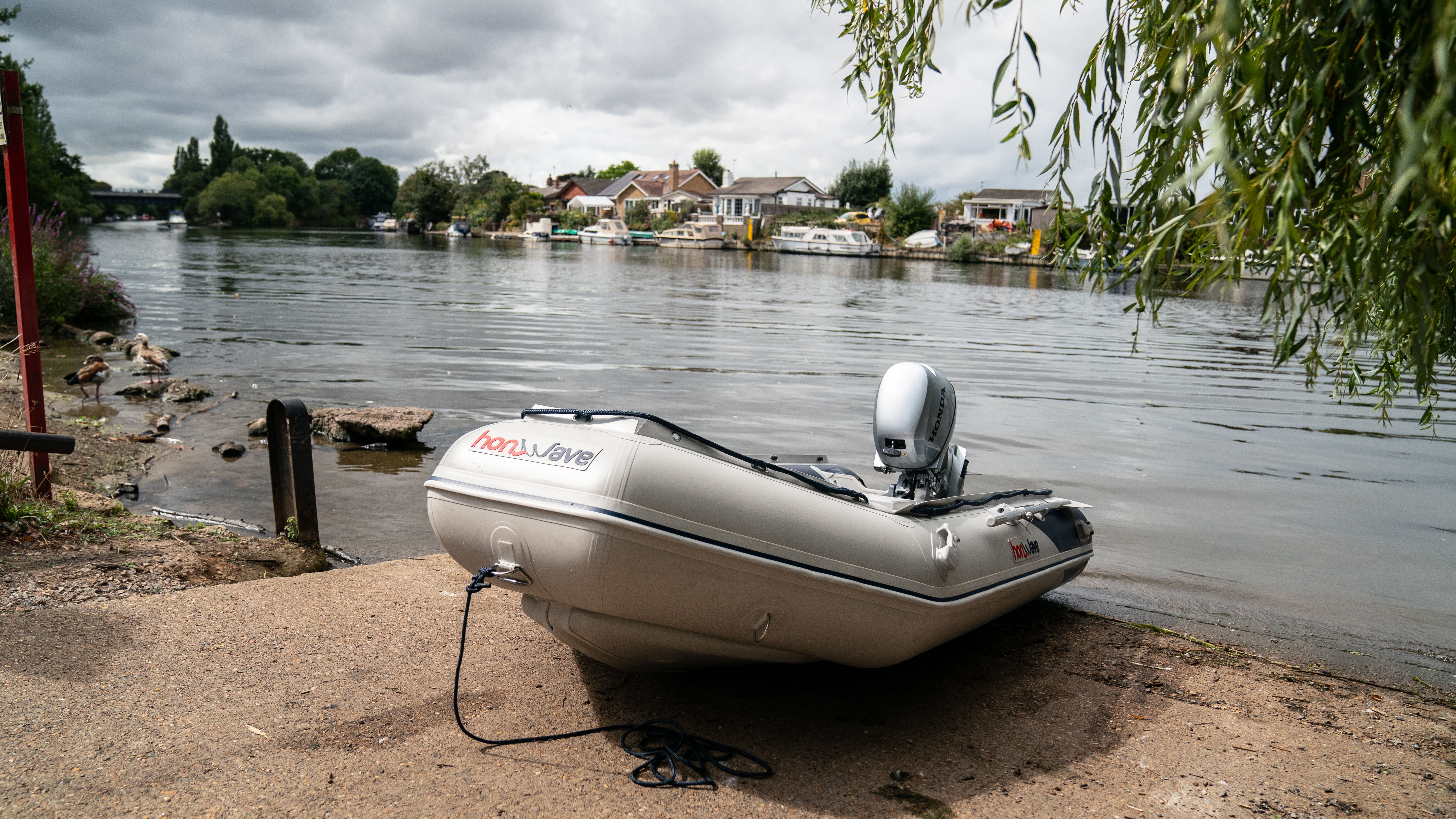 NEWSFLASH: the Honda HR-V isn’t a fun car. In fact, I’m pretty sure it’s the ‘Theresa May running through a field of wheat’ of motoring. But that doesn’t mean the HR-V can’t be fun. You just have to use it as a means of fun. And thanks to its masterful practicality and some absurdly and potentially stupid lateral thinking, recently I have.

Just to recap, here are the surprisingly handsome Honda’s killer ingredients; a 1.5-litre naturally-aspirated petrol engine, a pair of compact e-motors and a dinky battery. You have permission to yawn. But it gets better. By which I mean it gets worse. See, that rapturous drivetrain clout is connected to a CVT gearbox that whirs you to the national speed limit in 10.3 seconds.

Since he's had it, the most ‘fun’ thing Charlie (its usual proprietor) has said to me about it is that he hasn’t touched the brake pedal since Easter, returning over 60mpg. As you can imagine, Charlie is going to be a riot at this year’s Christmas party.

Now, like many of my potentially regretful decisions, this story starts at the pub. A glorious drinking hole sat on the bank of the Thames in lovely, leafy Richmond. One where sunburnt paddleboarders and furious families in rowing boats rock up on a sunny summer’s day via the river. As I clutched my pint I thought, ‘that looks fun!’. Then my imagination got the better of me and thought, ‘wouldn’t it be funny if someone rocked up in a tiny boat with an oversized outboard on the back'. 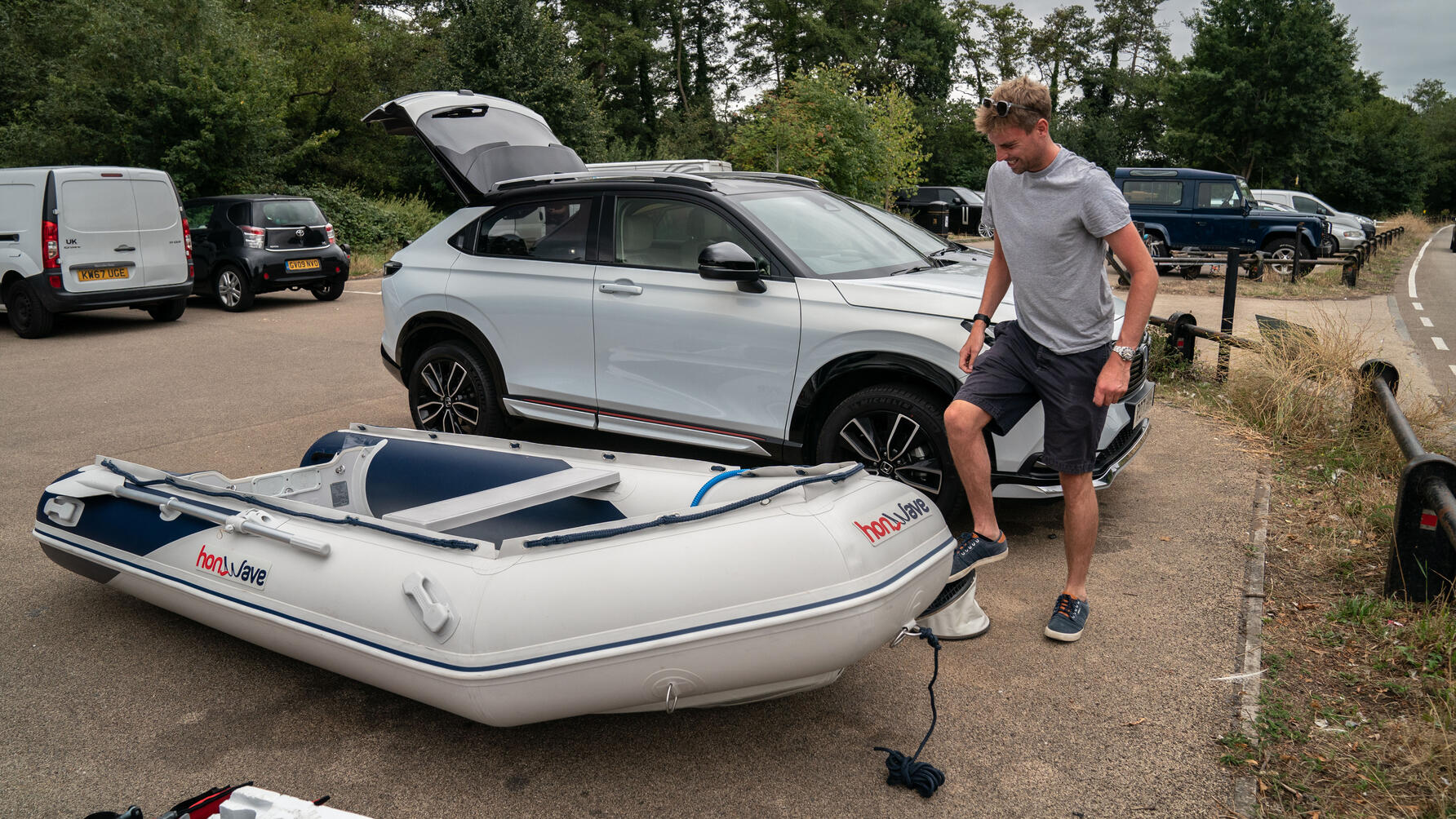 A few phone calls, Googles and weeks later I was at the helm of ‘Uniform’ – a Highfield HX6. This 6-metre RIB (Rigid Inflatable Boat) was powered by a Honda 135hp four-stroke outboard and a long way from my initial stupidity. See, unbeknownst to me, one needs a Powerboat II licence to be able to sail to the pub. So two days and a very choppy trip to Cowes later, I had one.

After I went on to Honda Power’s website, which is like a very expensive Argos catalogue for your shed. See, Honda produces waaaay more than just cars. Since 1953, it’s been manufacturing over 150 million ‘Power’ products. From general-purpose engines, tillers, generators, snow throwers, lawn mowers, pumps, jets, boats and outboard engines, Power has been an integral and often forgotten part of Honda’s overall business. Which is mad. Because like many of its cars, they’re subtly cool and all extremely well engineered. And, to my surprise, Honda were down with my floaty pub plan. So they sent me some floaty pub bits; a T.32 Honwave RIB, 10hp outboard, some lifejackets and a note of luck.

Now, the fact you can post a boat and put it in the back of a car still blows my mind. But the Honwave is a packaging masterpiece – a boat that goes in a bag and fits in the boot of your car. In fact, it fit annoyingly easily into the HR-V’s cavernous and clever multi-purpose 1,305-litre boot. When you have found somewhere to set sail, all you have to do is pop the electronic boot lid, lob it out, unfurl it and spend 35 mins inflating it with a footpump. Which is easier than you’d think. After that and a bit of breathless swearing, you attach the seat, strap down a jerry can in the middle and feed it to the outboard. 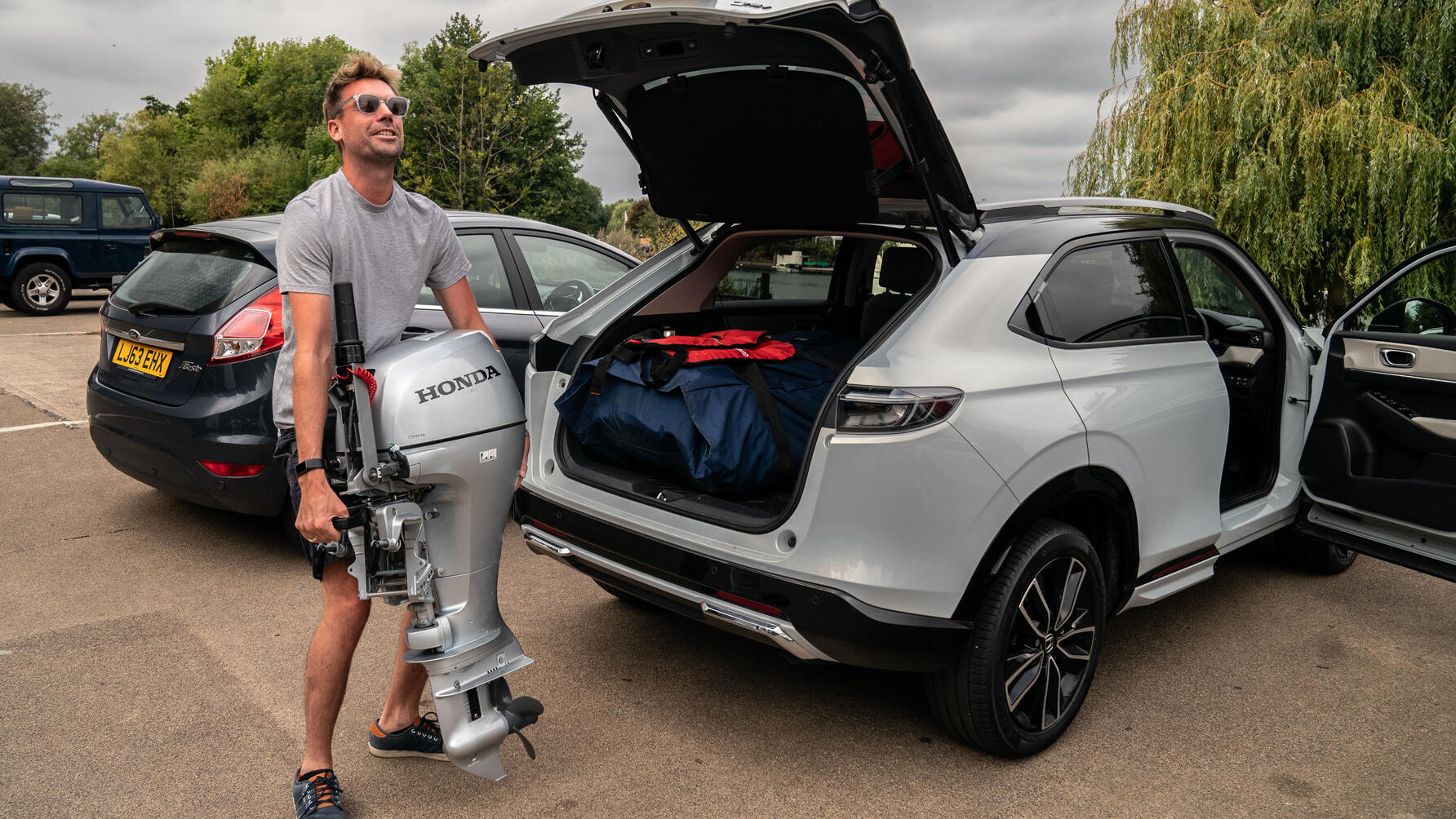 Ten horsepower doesn’t sound a lot in the world of 2,000bhp hypercars, but 2bhp or 4bhp is typically all you need for the kind of voyage I was embarking on. The 10bhp engine was so smooth and powerful it was pretty much breaking the 8 knot speed limit at tickover.

But it also got me to the pub very quickly, where I had a drink, and reflected on how versatile and clever Honda is. And just like the HR-V, the outboard and motor were efficient, practical and surprising. But unlike the HR-V, they were very good fun.