Join me for a moment in 1985. You’re walking down the high street in your brand new Air Jordans, stepping in time to the bassline of Frankie Goes To Hollywood’s ‘Relax’ hissing from your Sony Walkman headphones. It’s been out a while, but it’s still catchy.

You don’t hear the blare of the approaching 4.9-litre flat-12 engine over your right shoulder, but you’re stopped dead in your tracks as one of the very first Ferrari Testarossas in the country growls past you at hip height, all strakes, girth and pungent fumes. 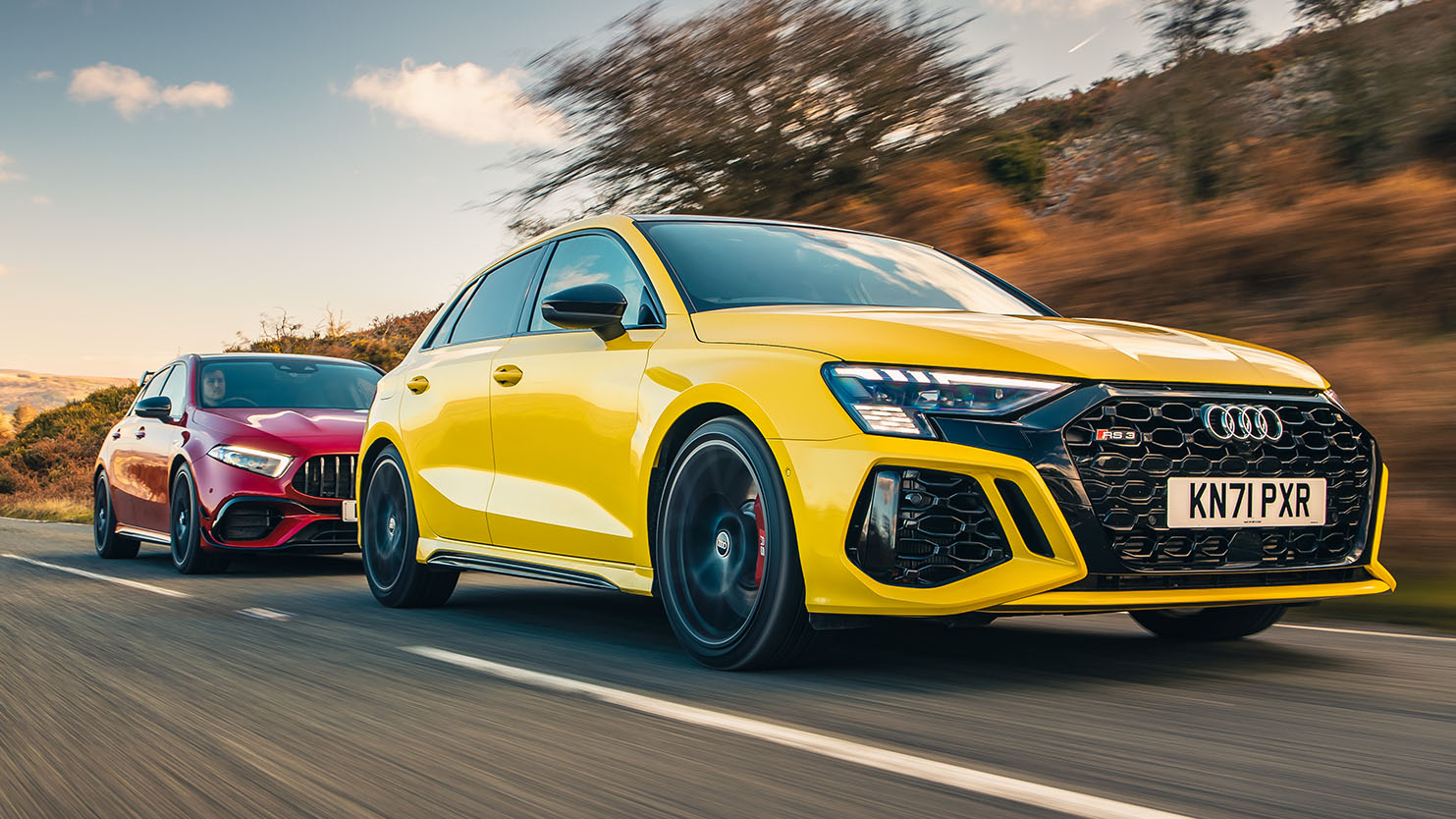 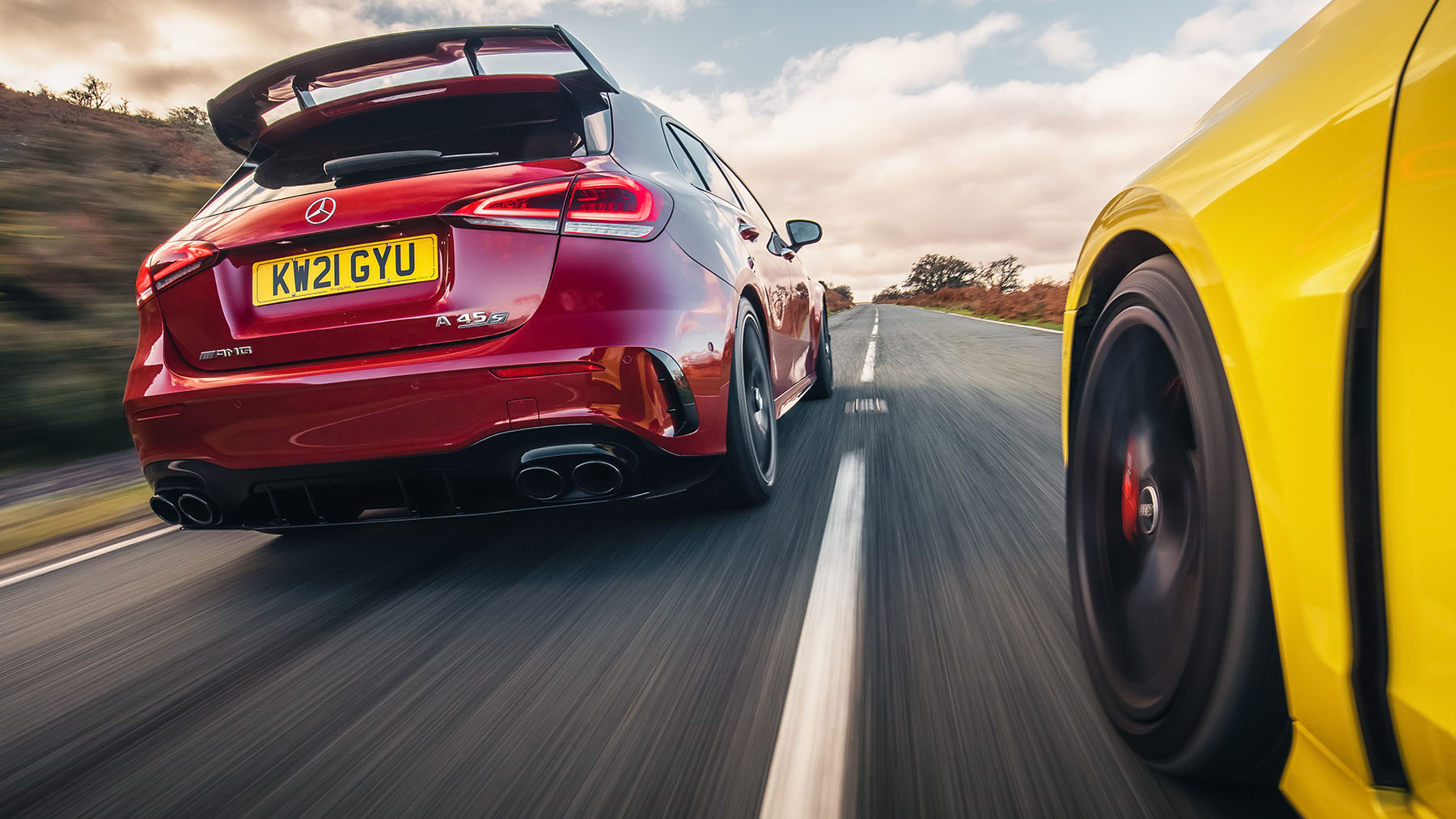 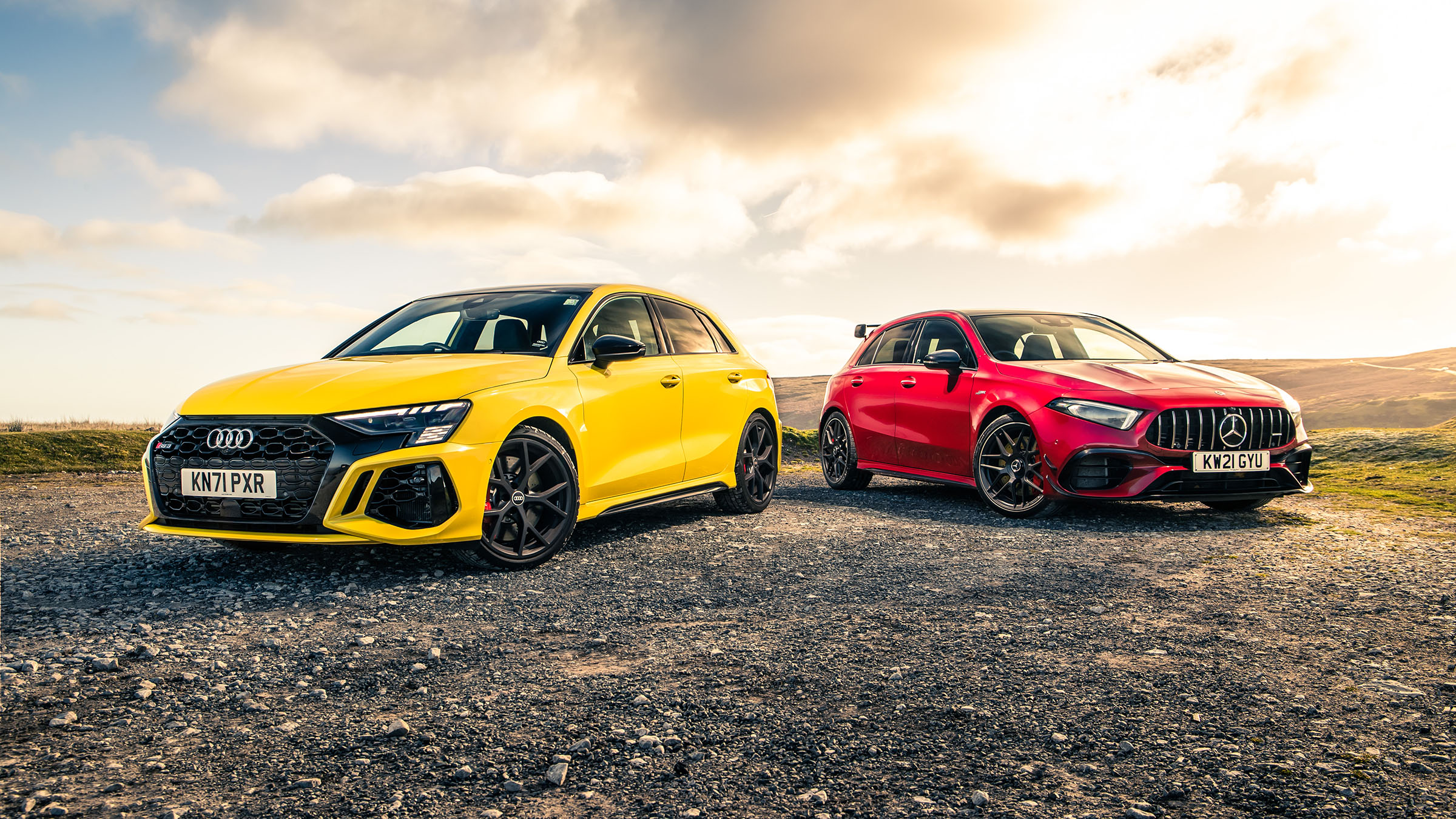 ‘How does it feel’, you think to yourself, ‘to drive a car which develops a claimed 385 horsepower?’ Perhaps only astronauts and stockbrokers will ever know potency like it. 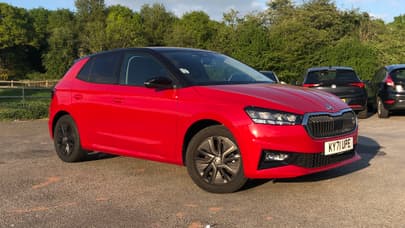 Is the Skoda Fabia boringly good, or just good?

Shrugging off the fantasy, you clamber into your Mk2 Golf GTI, and as its eight-valve 1.8-litre engine thrums into life, chuckle at the idea of a car developing almost four times the power of your petite hatchback.

Welcome back to 2021. Your headphones are no longer a tangle of wires, Frankie’s entire discography is a touchscreen tap away, and factory hatchbacks routinely have four hundred horsepower.

Hatchbacks can go from 0-60 at least two seconds faster than the healthiest Testarossa Maranello ever built. The Eighties taught us ‘greed is good’. The Twenties seems to be the decade of 'be careful what you wish for'.

The Audi RS3 has had this much wallop for a while. The last version packed 400 metric horsepower (394 of the Queen’s horses), and while Audi has managed to keep the headline act 2.5-litre straight-five engine for one last dance, officially it’s no more powerful than the previous car.

Torque has been tickled up 20lb ft to 369lb ft, but so far as the numbers war goes, Audi has decided either that 400 is quite enough. Or perhaps 400 is the most it can get away with without faceplanting over a tripwire of CO2 emission red tape. 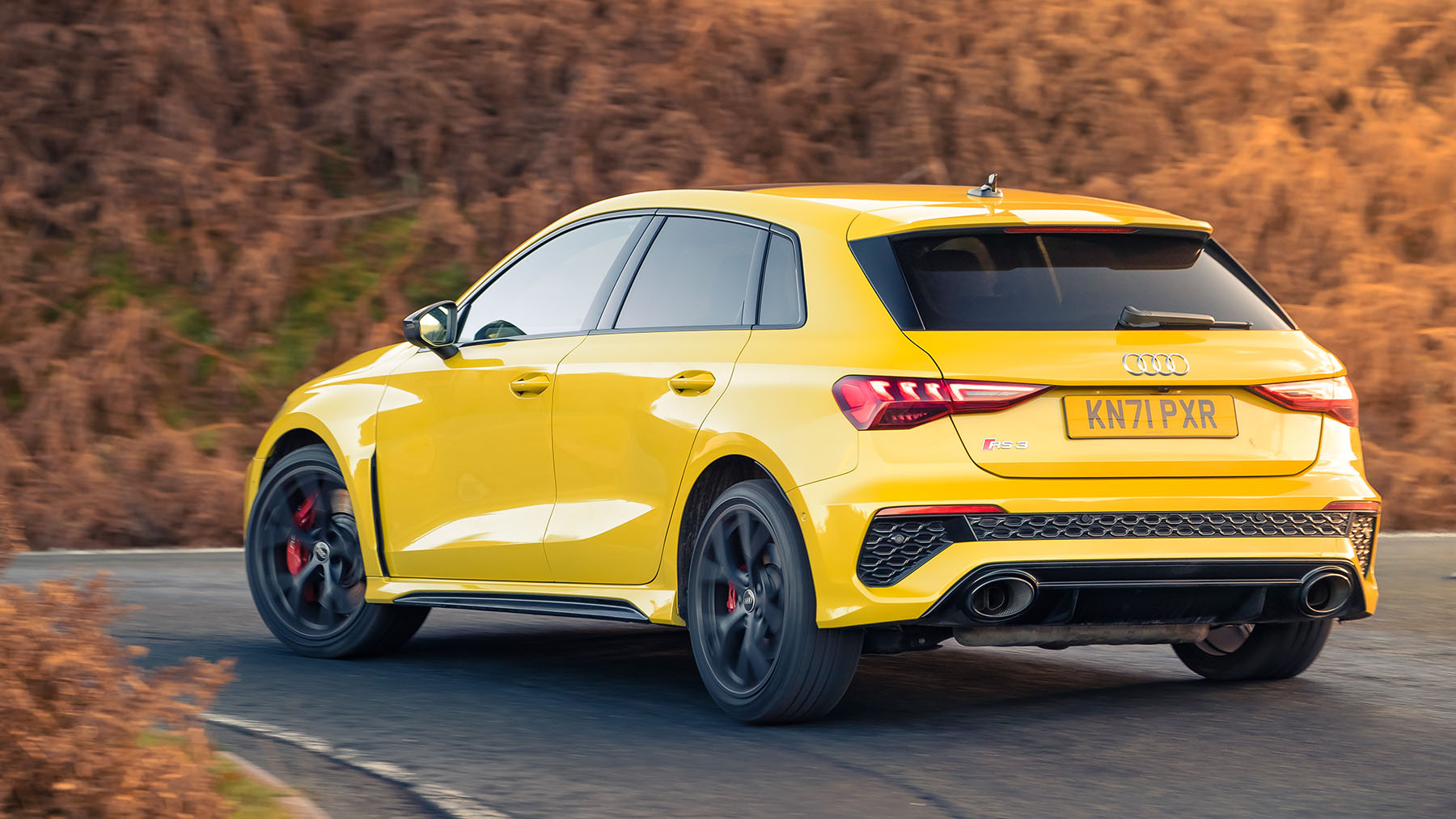 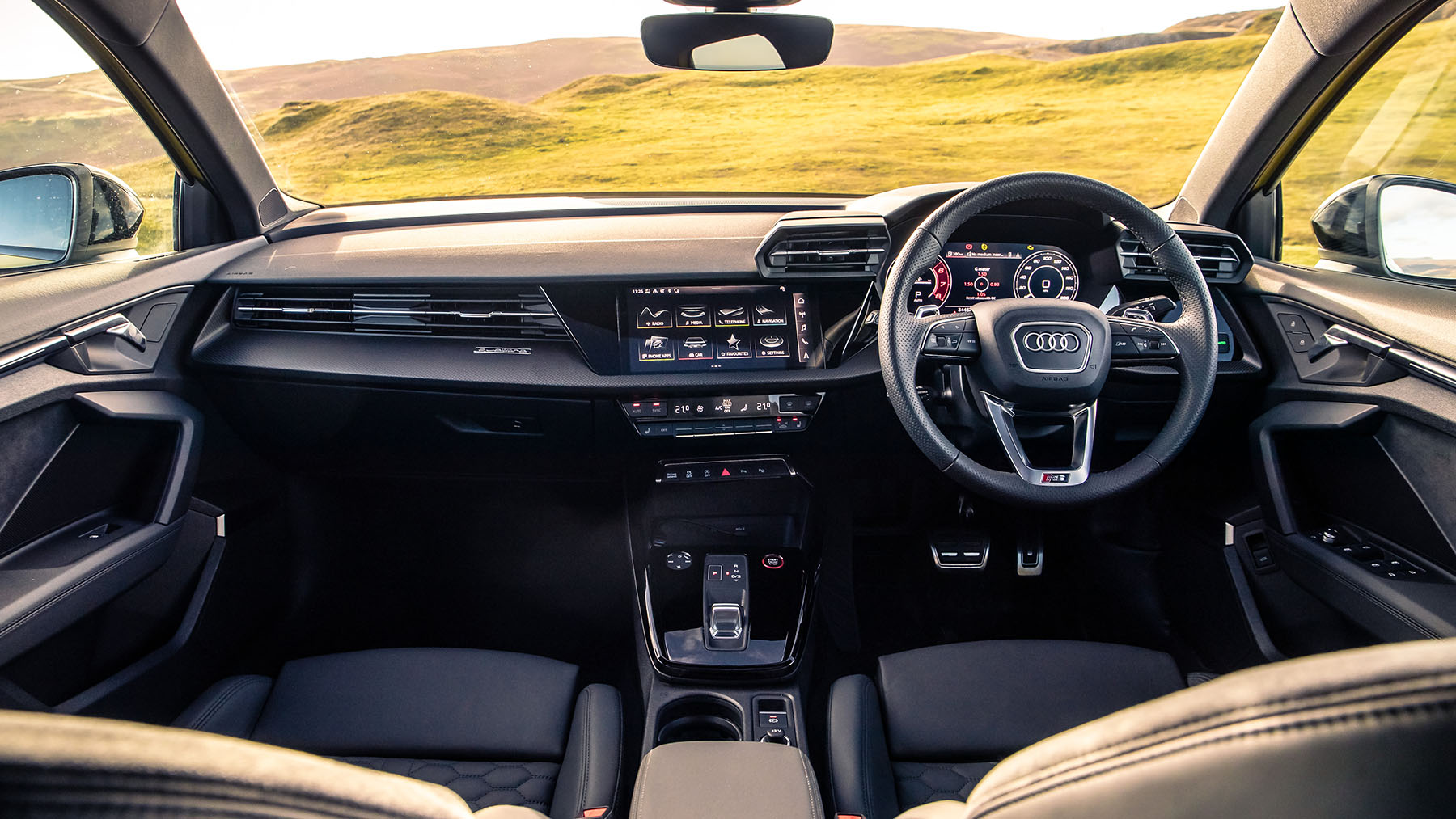 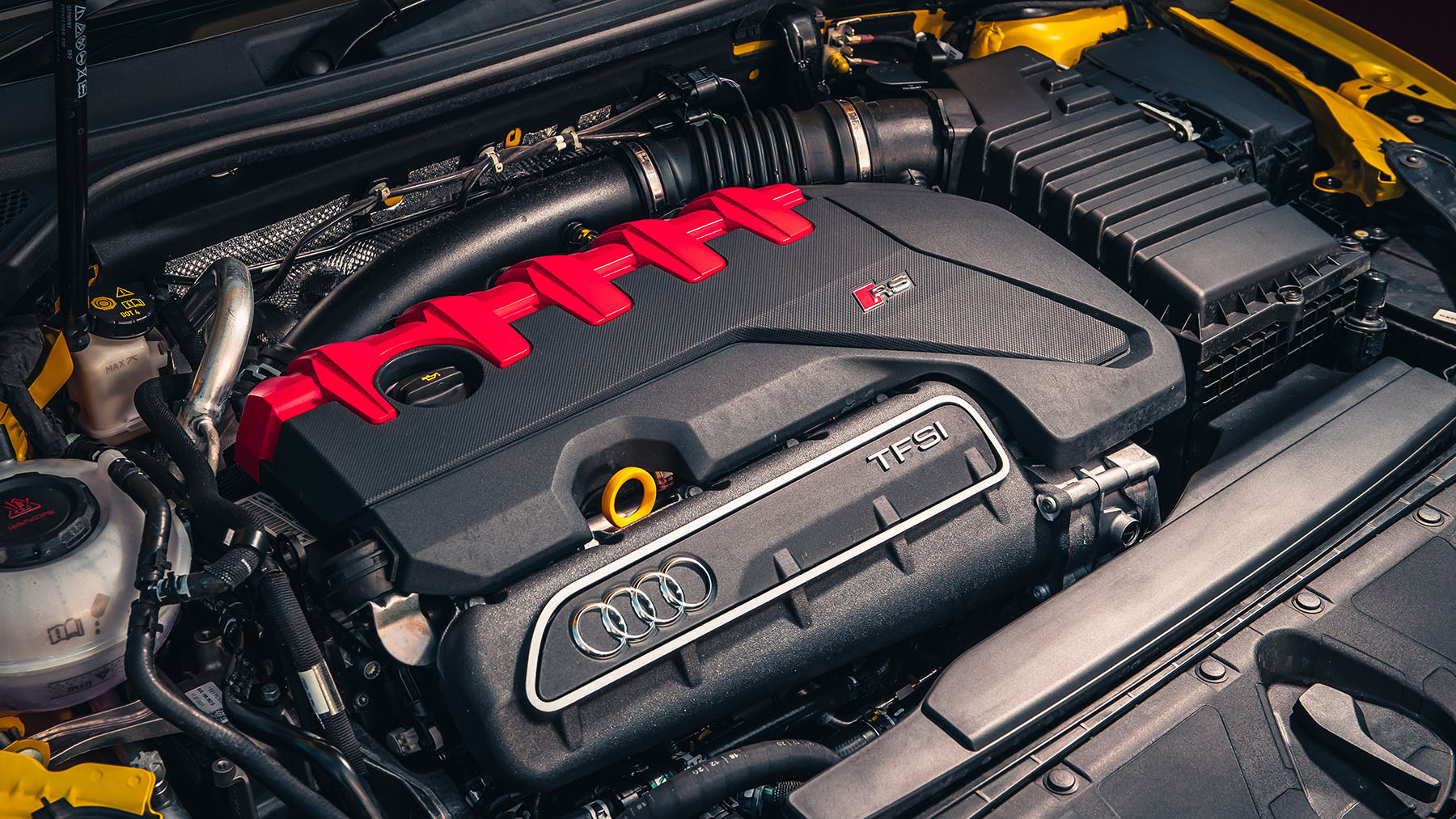 But thanks to the lunacy of AMG, welcome to a £120,000, 800bhp hot hatch twin test. It’s a sign of the times we’re living in – the last days of anything-goes internal combustion – that the latest VW Golf R or even a Porsche 911 Carrera are simply not powerful enough to be in this test.

So, what’s new for this RS3? An even bigger grille, obviously. There’s no front bodywork to speak of any more, just gaping plastic chickenwire, which a kamikaze pigeon made a bit of a mess of as our Greg was driving this one over from Germany. £88 to repair, that. Plus labour.

Drink in the chintzy chequered-flag daytime LEDs, the risible fake mesh arse trim, the lazy exhaust treatment and that the RS3 – yet again – wears wider tyres on the front than the back to quell its inherent fun-sponge understeer and you’re left wondering what, if anything, Audi has actually bothered to change for its latest hyperhatch.

The short answer is Drift Mode. It had to. Once Ford threw a trick AWD system of clutch packs at the old Focus RS that allowed it to power oversteer on demand, the stuffier Germans had to react.

The current A45 in top ‘S’ trim was the first, then the latest Golf R, and now the ultimate A3, which shares its basic platform – but precious little else – with the £10k cheaper Volkswagen.

So, thanks to a clever torque-splitting rear axle, the RS3 can, as standard, from the factory, chuck huge wads of torque at each rear tyre. For fun. They don’t make Audis like they used to. 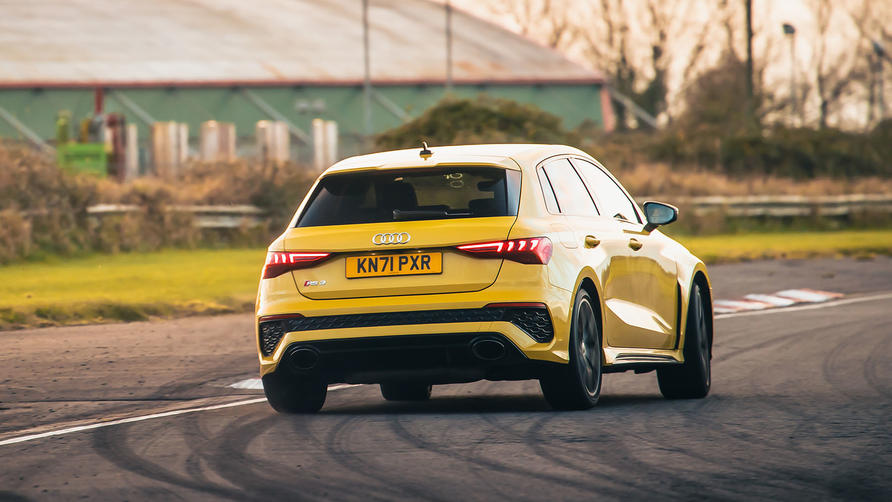 At first, the dedicated ‘Torque Rear’ drift mode doesn’t seem much cop. Invariably the car scrubs through a few yards of understeer as you stamp on the throttle pedal, before shunting power to the back and serving up your hero oversteer moment. You’ll need two lanes of room to get it out and back, so on the road, forget it.

On a track, it’s a laugh. Until you see the mess it’s made of your tyres, smell the overworked brakes, and get black-flagged quicker than Nikita Mazepin at Legoland Driving School.

The 416bhp A45’s hoon-mode is much the same. Except it’s more forbidden: while the Audi’s prosaically named setting is a broad-daylight option on the touchscreen menu, to activate the AMG’s Drift Mode you have to select Race Mode, delete the ESP, then squeeze both gearshift paddles to unlock its secret under-the-counter hooligan level.

So, the much-vaunted powerslide-o-matics aren’t up to much. But what the new rear diff and unbuttoned top-button attitude has done for the RS3 overall is transformative.

This is – and I appreciate I’m emptying the faint praise bowser in one hit here – the most fun Audi ever. Yes, Quattro and R8 included. At long, long last, Audi has built a car with a chassis you can impose yourself on, not just sit atop and whoosh down the road, bored out of your skull at the speed of sound.

The RS3 actually (mis)behaves like a proper hot hatchback. It’s sensitive to a cheeky throttle lift and tucks its bum in entering a bend. The steering’s still completely numb, and far inferior to the meaty sense of connection and semi-believable feel bubbling back through the AMG’s part-suede wheel, but this is not one of the bad old Audis where the cornering menu consisted of mild understeer, panic understeer or Ever Given-in-white-water-rapids understeer.

Demand some throttle mid-corner and the RS3 obediently lobs it to the squatted rear axle, using just a flick of a drift to pivot around the bend. Keep your foot in and you get that fantastic sensation of hard-worked rear tyres being driven hard into the surface, propelling the car forwards while the fronts seem to be barely clinging onto dry land.

Afterwards the mighty A45 feels more one-dimensional. Just as quick through the same corner, but more businesslike, less interactive.

What a powertrain too. The multi-filtered exhaust is less raucous than the old RS3's – good, maybe it’ll encourage certain factions of the owner’s club not to thunder around town centres in first gear. You know who you are.

Inside there’s still a rasp and a sense of a huge motor protruding ahead of you, as if you’re driving a Second World War fighter plane with Apple CarPlay. Its plateau of torque couldn’t be more different to the AMG’s highly strung four-pot, which doesn’t deliver maximum overtake punch until it’s past 5,000rpm, and 250rpm later, it’s all gone.

By a nose, the RS3 is the faster car, but that’s more to do with faster power-shuffling between the axles off the line. Which would I choose for a quick overtake on a greasy A-road? Easy: the brawnier Audi. It’s relentless.

Right, let’s spend some time in the A45S. This car might be three years old but time has not dulled just what a raving psychopath it is. AMG’s approach to a superhatch – plumbing in the most powerful road-going four-pot engine ever made – gives it a wild character that’s more Japanese rally rep than German muscle car. The A45 won’t mooch about mugging dawdling Caymans for fun like the RS3. 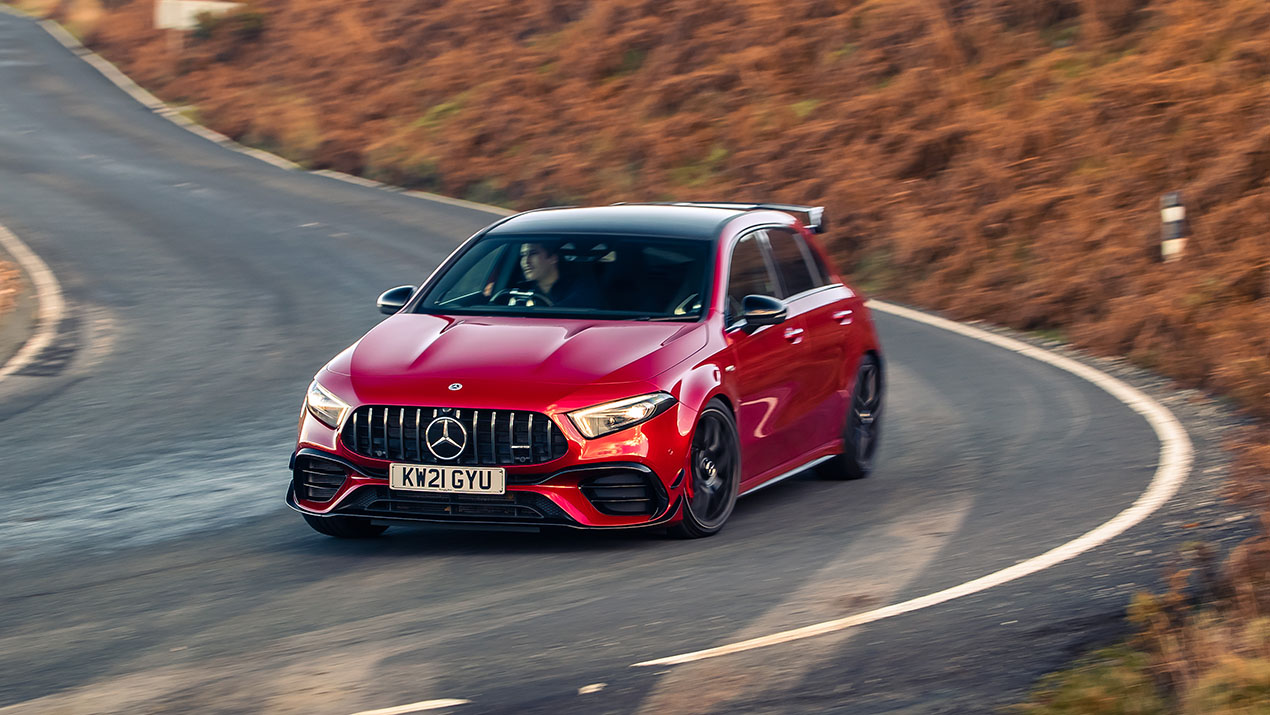 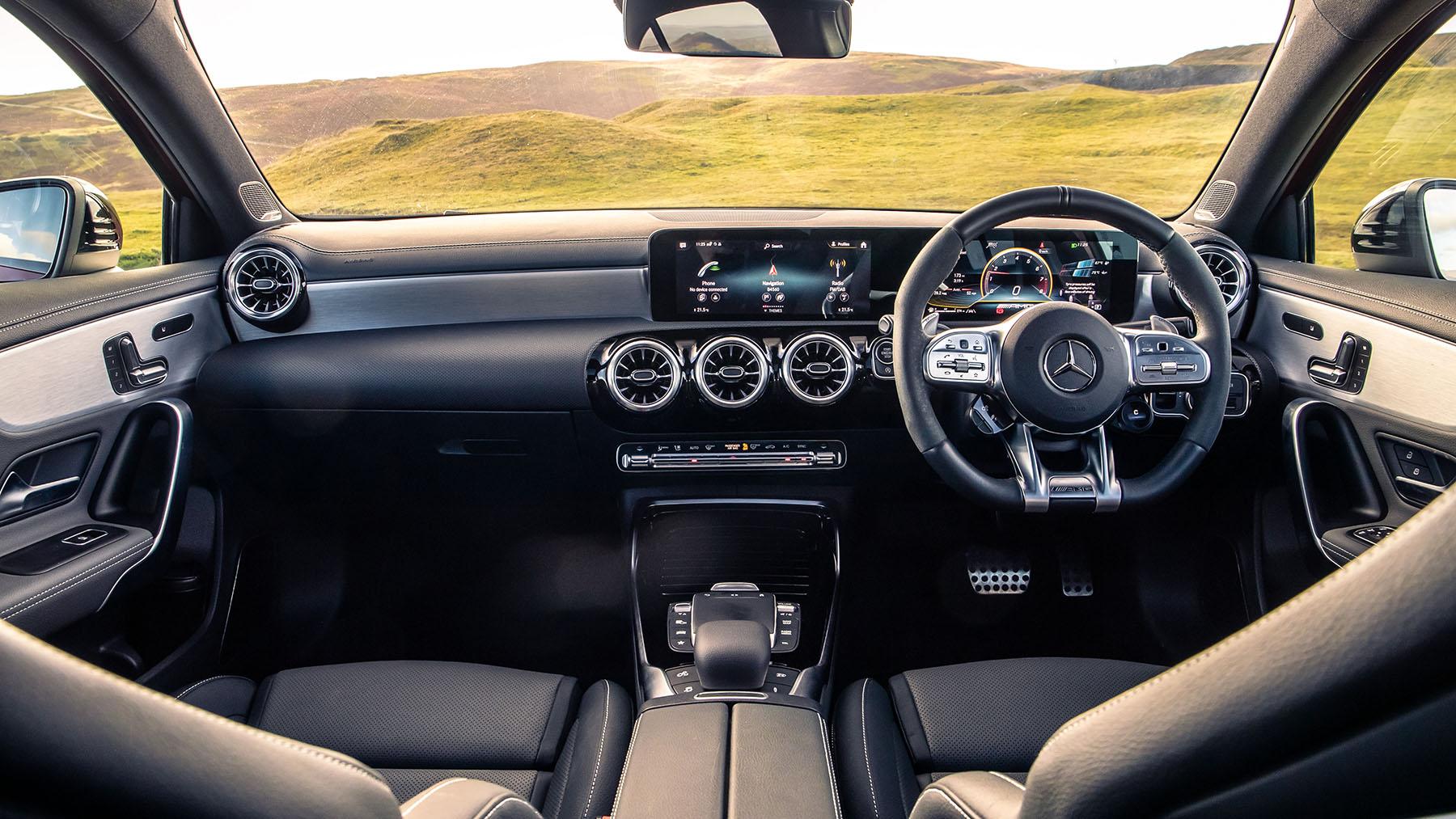 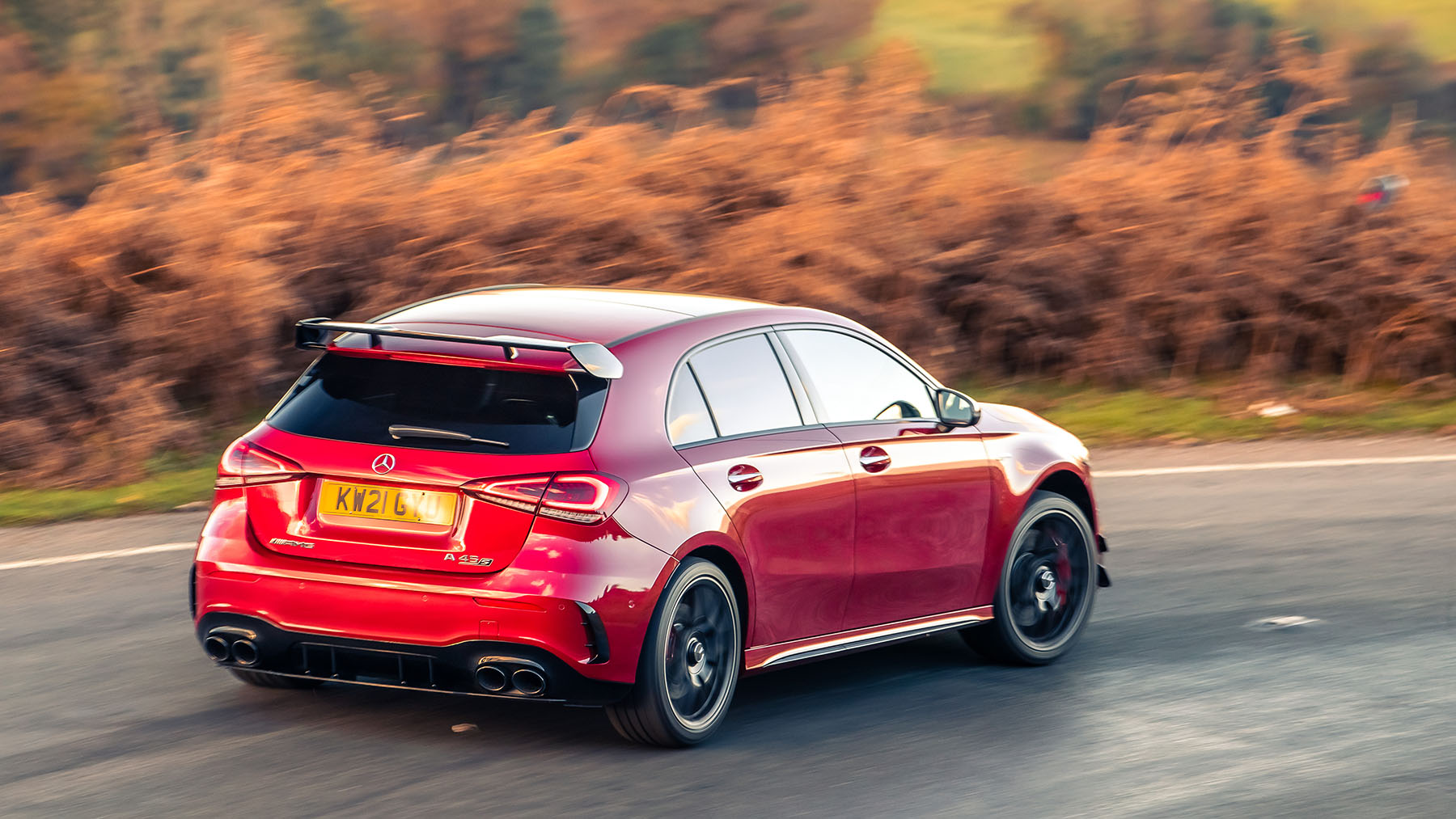 You’ve got to be fully committed, keeping that mighty turbo on boost and ideally taking gearshifts into your own hands with the delightfully dense metal paddles.

The noise, the gearshifts, the bucket seats, and especially the ride. There are three settings: Comfort, Sport and Sport Plus. The softest setting is equivalent to the Audi’s firmest mode, and things only get more brittle from there. Life in the supple Audi is astonishingly compliant.

So, the A45 is a punishingly physical experience. You enjoy a greater sense of connection through the steering, sharper throttle response and a daintier brake pedal. The car feels a good lick lighter than the RS3 – even though it’s not, on paper. 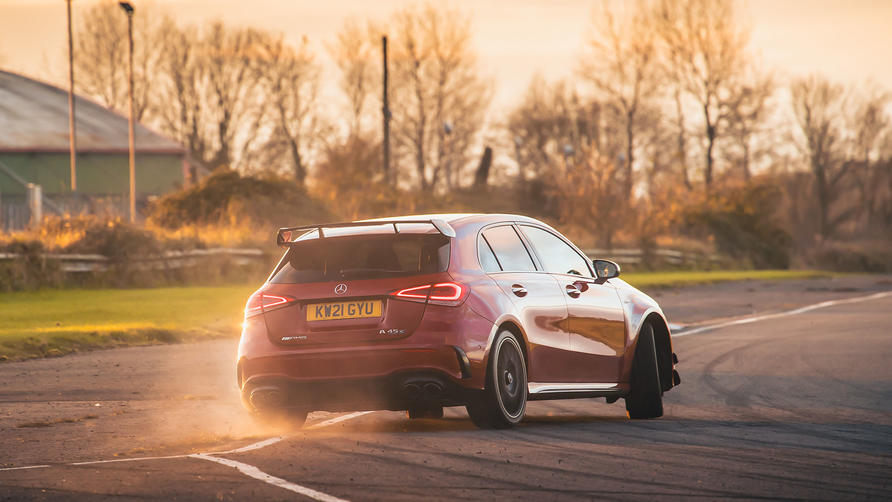 But it’s also ludicrously firm, the motorway road noise is appalling, the engine a trifle buzzy. The A45 never settles down. It cannot be pacified into just pretending to be a normal A-Class, like the RS3 can. It’s always reminding you that you’ve paid the thick end of £60,000 for one of the craziest hot hatchbacks ever devised.

Let’s pause the driving and do some housekeeping. Since I’ve just mentioned price, only one of these cars comes anywhere close to having an interior that feels worth the money, and it absolutely isn’t the dour Audi.

Sure, the build quality is neat, but the seats could’ve come out of an A4 diesel – so too the boring steering wheel – and there’s none of the AMG’s sense of occasion when shuffling through driving modes. The green-yellow-red shift-up lights on the new ‘RS runway’ dash are amusing, but wow, what an anti-climax overall. Audi used to do this so well – where’s all that R8-ish sense of designer label attention to detail gone?

What a pity the brutal suspension will pulverise it all into a fine dust within a week.

The RS3 is more practical. It offers superior rear legroom, better visibility, and its smaller wing doesn’t shudder and flex whenever you slam its more commodious boot. While the A45 managed 34mpg on a motorway run and averaged 26mpg day-to-day, the RS3 was 2-3 miles per gallon more efficient despite the extra cylinder.

I know AMG vs RS can get pretty tribal out there, so let’s just clear up that these are both terrific cars. I love that companies exist who want to see projects like this through to production. The A45 is a phenomenal piece of engineering. The RS3 has finally, after a decade, learned to open its cold, dead heart to the concept of ‘handling’.

Sometimes the Germans benchmark each other’s cars so ferociously you wonder why they bother even fitting different badges. But these two are deliciously different.

But to live with, to drive every day and enjoy how massively it’s been improved, the stellar new RS3 is the hyperhatch to buy now. 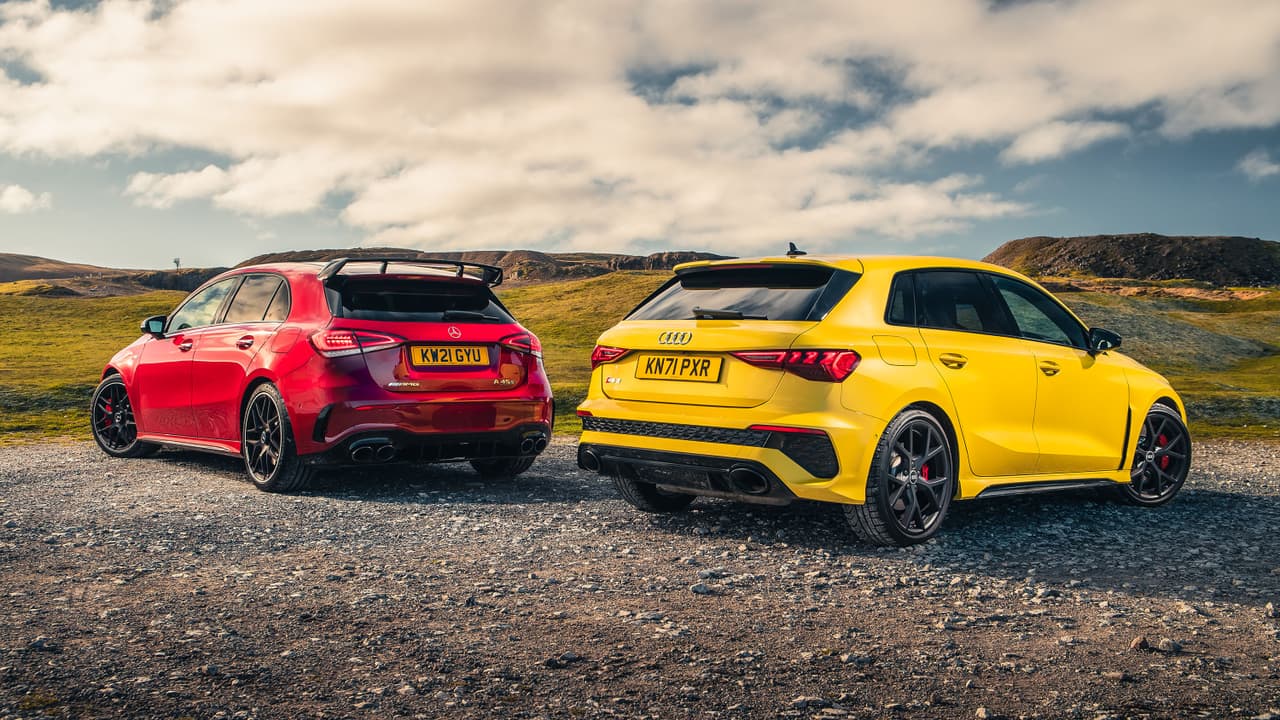