£785 p/m
External link to
with Leasing.com
Read why you can trust our independent reviews
Sam Burnett
Published: 09 Jan 2023
Skip 26 photos in the image carousel and continue reading 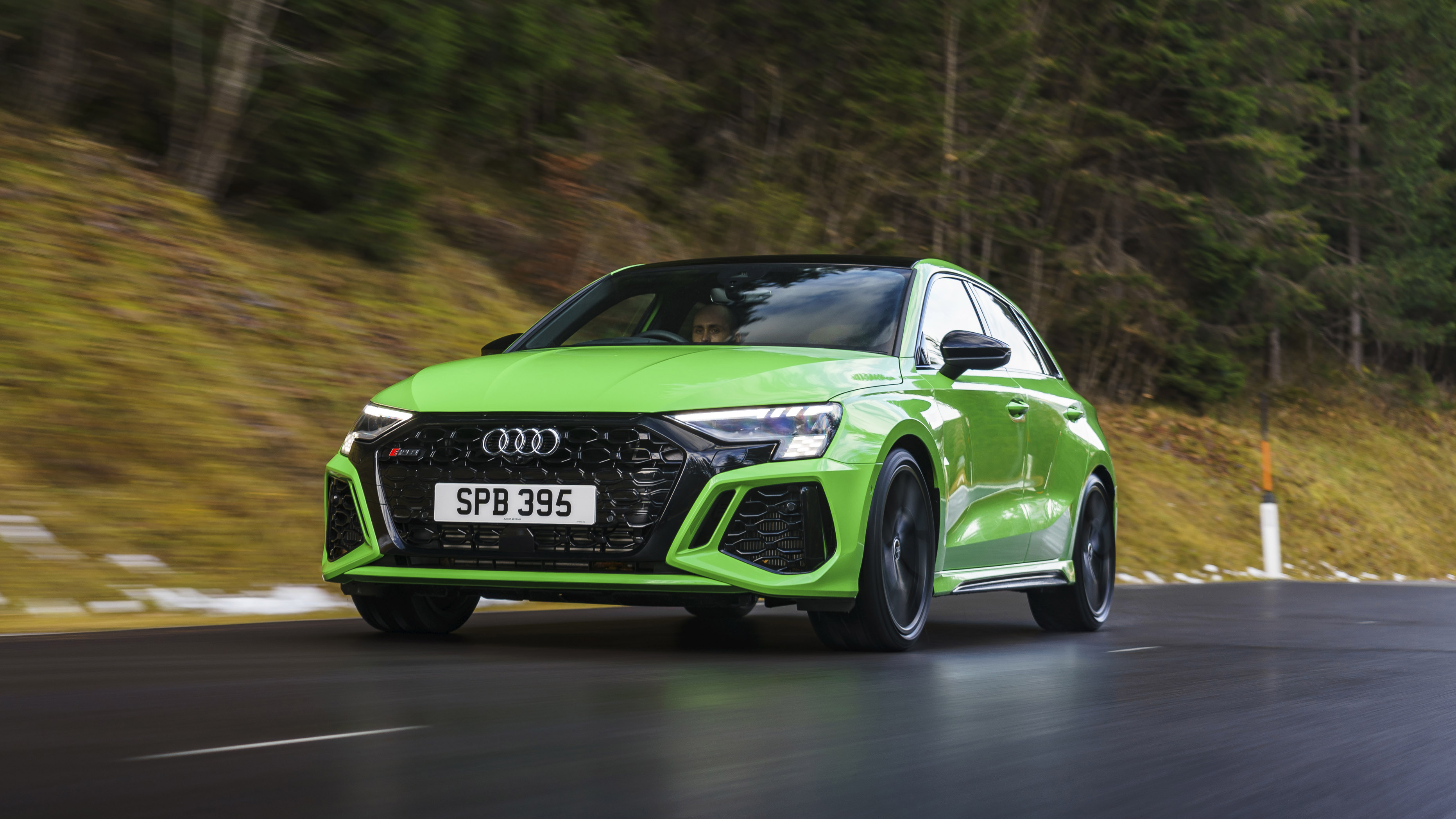 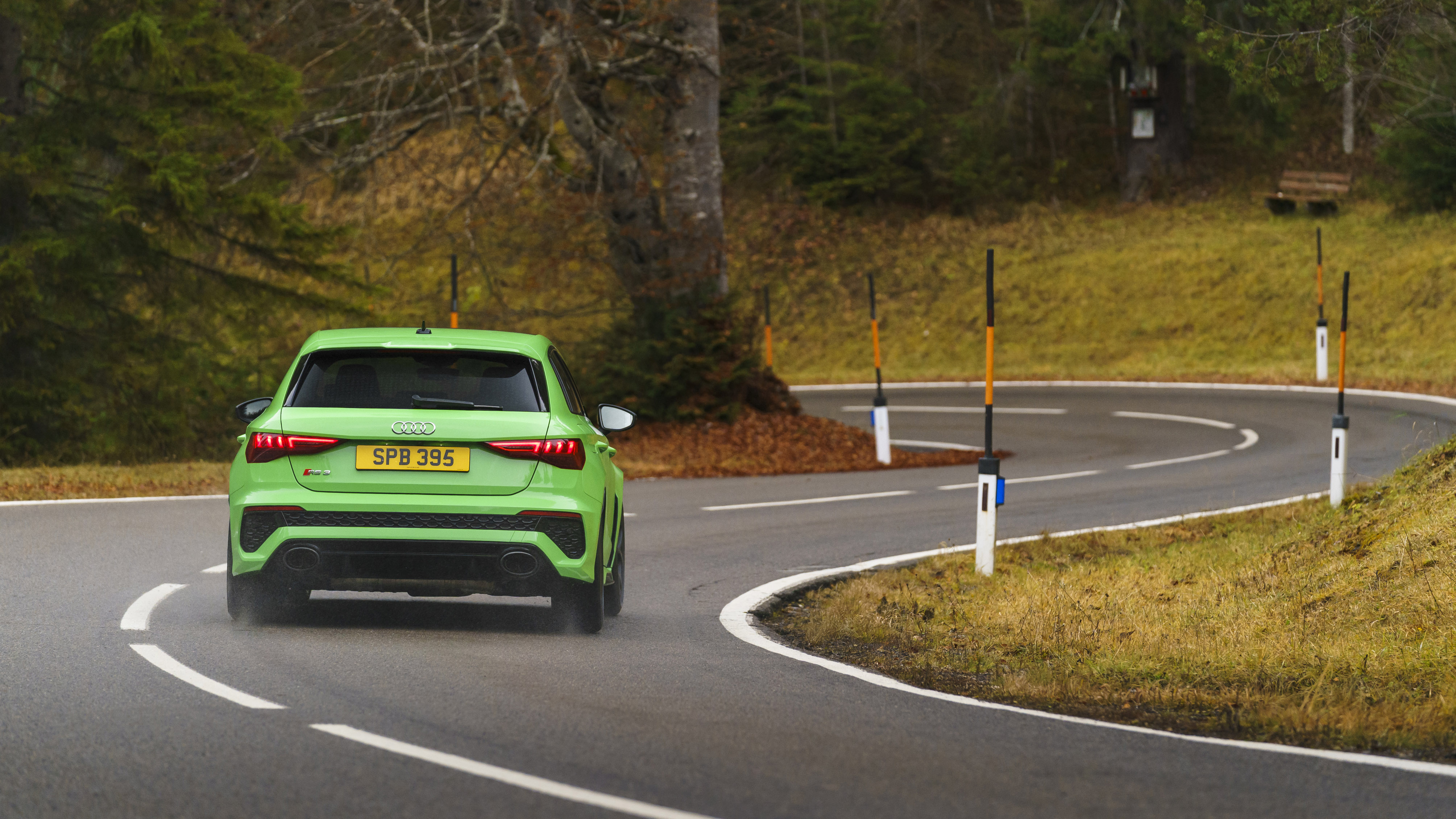 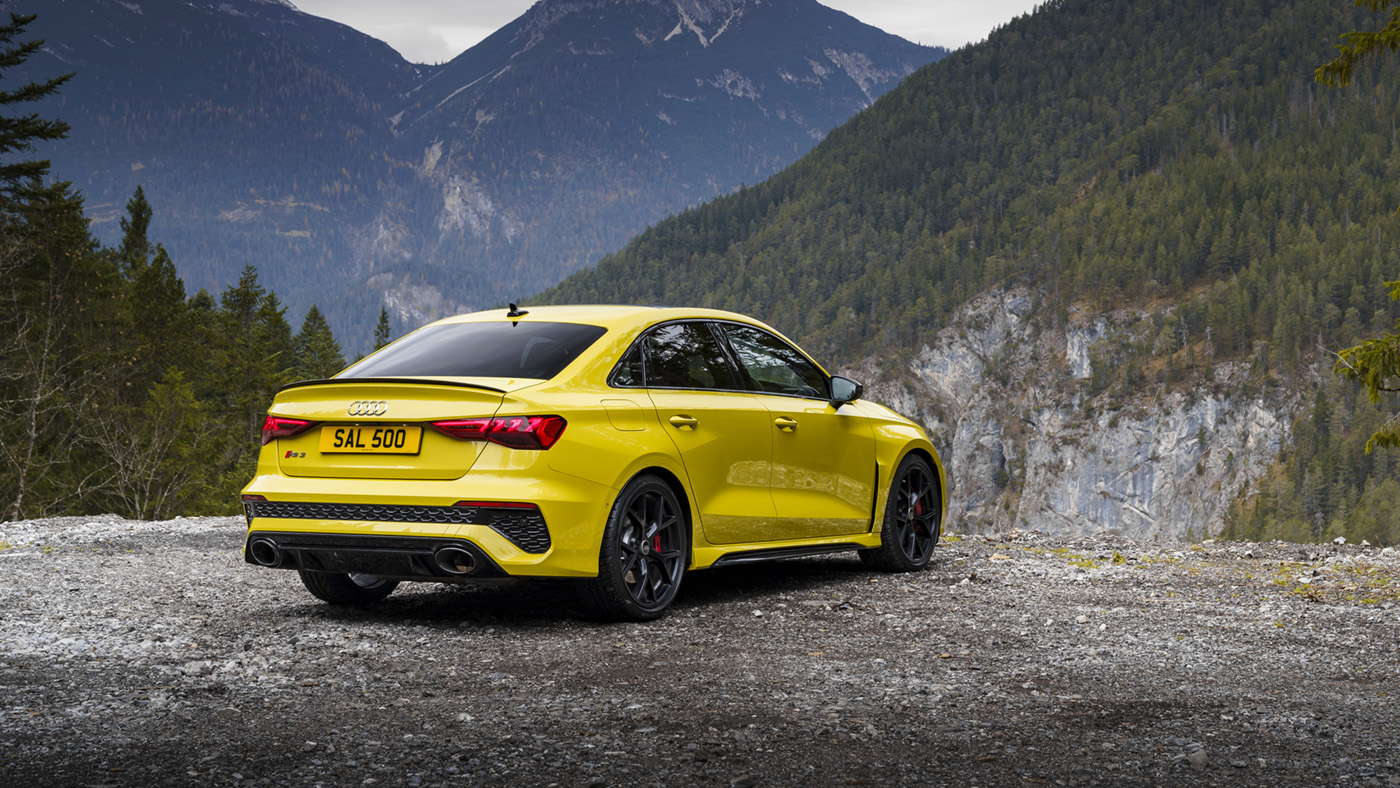 1 / 26
Advertisement
“The third generation of Audi’s five-cylinder megahatch - and the best one yet. Although you’ll need to spend time getting the best out of it”

Damping, engine, confidence - everything you need for covering ground fast all year round

We’ve enjoyed four generations of Audi’s venerable A3 hatchback, but this is the third iteration of its monstrous RS-badged alter-ego, and only the second generation of the saloon variant of the car (which incidentally holds the lap record around the Nürburgring for compact cars if that floats your boat).

As ever, it mixes a blend of the same general ingredients – among which are the excellent 2.5-litre 5cyl turbocharged petrol engine that drives all four wheels through Audi’s quattro system and the highly respectable A3 base that makes it a practical everyday car.

Did much change with the latest version?

At first, it does look like a bit of a massage – there’s no more power than before (394bhp) and slightly more torque (369lb ft), although both more accessible than they were. But just to look at the car on paper is to sell it a little short, you need to drive it of course.

The newest version of the RS3 has bigger intakes, wider tracks and impressively boxy arches. It’s also marginally longer, wider and taller than the previous RS3 Sportback, but with the same wheelbase, and comes equipped with less luggage space (by about 50 litres).

What about the fancy tech stuff?

All cars in the UK get adaptive damping, plus what Audi calls the ‘RS torque splitter’ to distribute a maximum of 50 per cent of available torque between the two rear wheels. There are optional ceramic brakes (which save 10kg), an optional RS exhaust – standard on some models – and a new mVDC (vehicle dynamics controller) which is intended to allow better/faster integration of the chassis systems.

Oh, and there are configurable lights on some models (LEDs are standard) that can spell out ‘R… S… 3’ and then a chequered flag in 8-bit when you approach the car. Still not sure whether it’s genius or utterly appalling. You might want to blip the fob from behind a tree and make a run for the driver’s seat.

There’s a lot going on…

Yes, the RS3 is a busy little bee with lots to keep you engaged. Take the Audi Drive Select system for example, which features seven different settings (Auto, Comfort, Dynamic, Efficiency, RS Individual, RS Performance and RS Torque Rear). After that, the ‘RS Individual’ mode allows a triplet of adjustments to the drive system, suspension – where ‘Comfortable’ is a long-legged performance setting different to ‘Comfort’ – steering, engine sound, and stability control intervention thresholds.

Does sound a bit complicated...

If you want to put the time in you can get your own fine-tuned set-up out of the car, but it’s all a bit annoying at first. Worth persevering with though, the initial bit is a faff, you can programme your settings to be applied with a double press of the RS button on the steering wheel. The first jab gets you RS Performance mode.

And is the car fun to drive?

Overall the RS3 is deeply impressive. The engine warbles away, grip is consistent and strong, body control just the right side of telling you what’s going on without leaning. But the best bit is the damping, because it makes all the systems feel remarkably natural – on a bumpy, unknown B-road, this would be the car to have. And we’d count supercars in there, too. You don’t get knocked off line, the steering is very accurate, even if it’s not the most chatty of systems – and nothing skips. If the tyres are in contact with the floor, they’re working, and they work hard for the RS3.

If we’re being very picky, the car can feel a little too front-wheel drive on very slick roads, although that’s probably the safest option, to be honest. But once you start to trust the car and give it more aggressive inputs, it becomes remarkably neutral. Weirdly, the Sportback hatch feels a bit keener on the twisty stuff, and the saloon a tad better at high speed stability, but that could be simply preconception – it’s the same gear underneath.

The good thing is that the high-quality ride translates when going slowly. Yes, the ride can nibble a little at bad surfaces, but you could absolutely have this as a daily driver without compromising your spinal integrity. 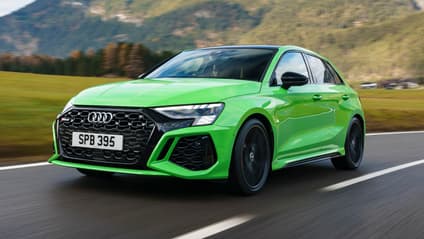 “The third generation of Audi’s five-cylinder megahatch - and the best one yet. Although you’ll need to spend time getting the best out of it”

The best of the RS3 is buried under layers of customisable options, data and a capability in any conditions. The onus is on the driver to pick the right combination, which is a lot of pressure for both car and driver, but when you get there it’s brilliant. The RS3 is a really good car on the right kind of wrong road, and it’s usable for much more of the year than more exotic options.

So is this the best megahatch on the market? Well, the main competition comes from the Mercedes-AMG A45 S, a similarly speedy, similarly priced 400-ish bhp AWD hatchback. But they’re actually quite different. Where the Merc is angry and pointy and hard, the Audi is more cultured, better damped and much less aggressive. It’s certainly not slower though – and especially not on a bouncy B-road – this is probably as fast an A to B point car down an unknown road as you’re likely to get short of something with rally stickers and a roll cage.

It’s not as visceral as something like the Merc – despite being the same power and also AWD – but the fact that it feels like it’s more on your side makes it just as quick. You’ll feel like you’re going faster in the A45, but you probably aren’t. More than that though, the RS3 now feels like it’s starting to get really comfortable in its own skin; it’s a confident, worthwhile, capable car, with a side order of madness not far off. Just don’t spec it in Kyalami green. 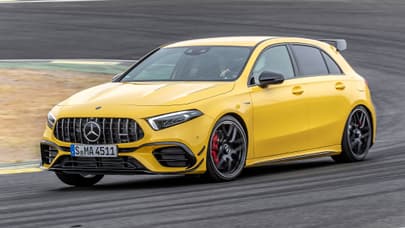