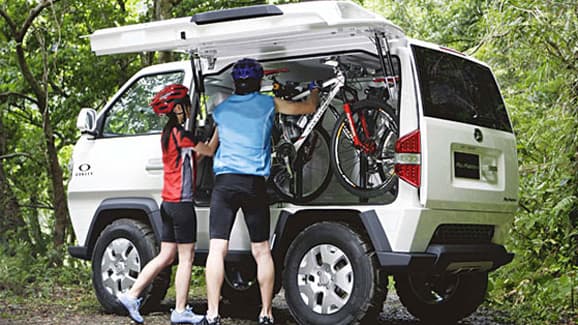 The Bedford Rascal is back! Well, sort of.

This is the brilliantly named Daihatsu Mud Master-C, which looks - to our eyes at least - every inch the spiritual reincarnation of the little-missed Rascal. Only taller. And less, erm, topply.

Another concept due to debut at the Tokyo show, the Mud Master is described as a 'small, tough transporter'. Rascal-inspired it may be, but it features a bunch of new tech that'd have true Bedford devotees turning in their vans.

Like the three gullwing doors (which, if this wasn't a concept, would probably be described as 'hatches' instead) which open to reveal a configurable interior. The Mud Master can function as a mountain bike transporter, a work van and - our personal favourite - a crane, something we don't remember the Rascal ever managing.

It should also be able to do the job off-road, thanks to a hub reduction system similar to that on the Hummer H1, which transfers power via gears mounted between drive shaft and wheel. Once again, we're pretty sure the Rascal made do with simpler technology.

So if you miss the Rascal enough to see it reincarnated in Mud Master form, you'd better get pestering Daihatsu in Tokyo. Or you could always move to Ecuador, where the Rascal is still being made as the Chevrolet Supercarry. Style never goes out of fashion.