Is it a bird? Is it a plane? No, it's the 2,000bhp electric Ford Supervan 4! | Top Gear
Advertisement
First Look

The Fast Transit returns as a comically-powered full EV. All hail the 'Ford Pro Electric Supervan' 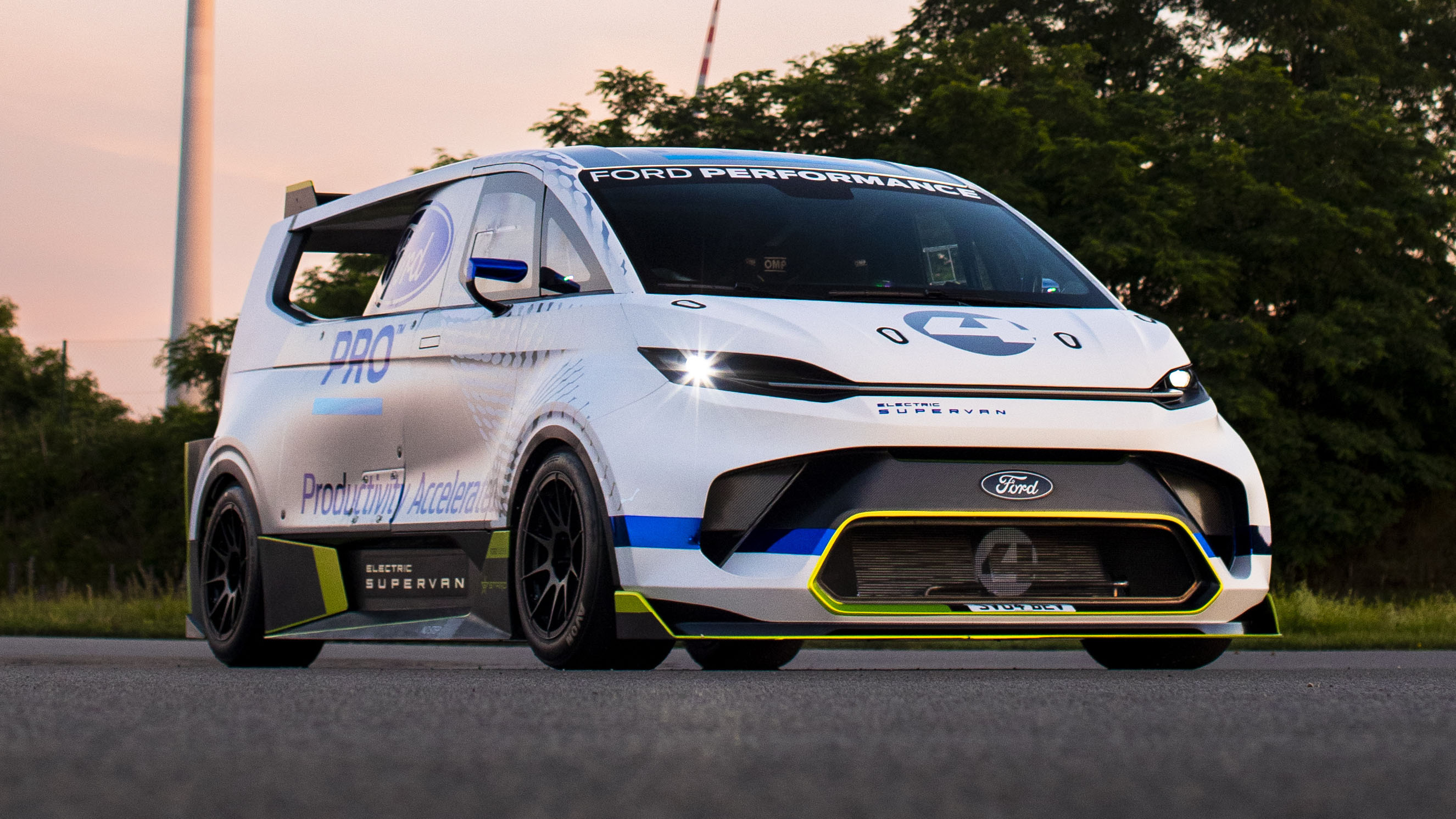 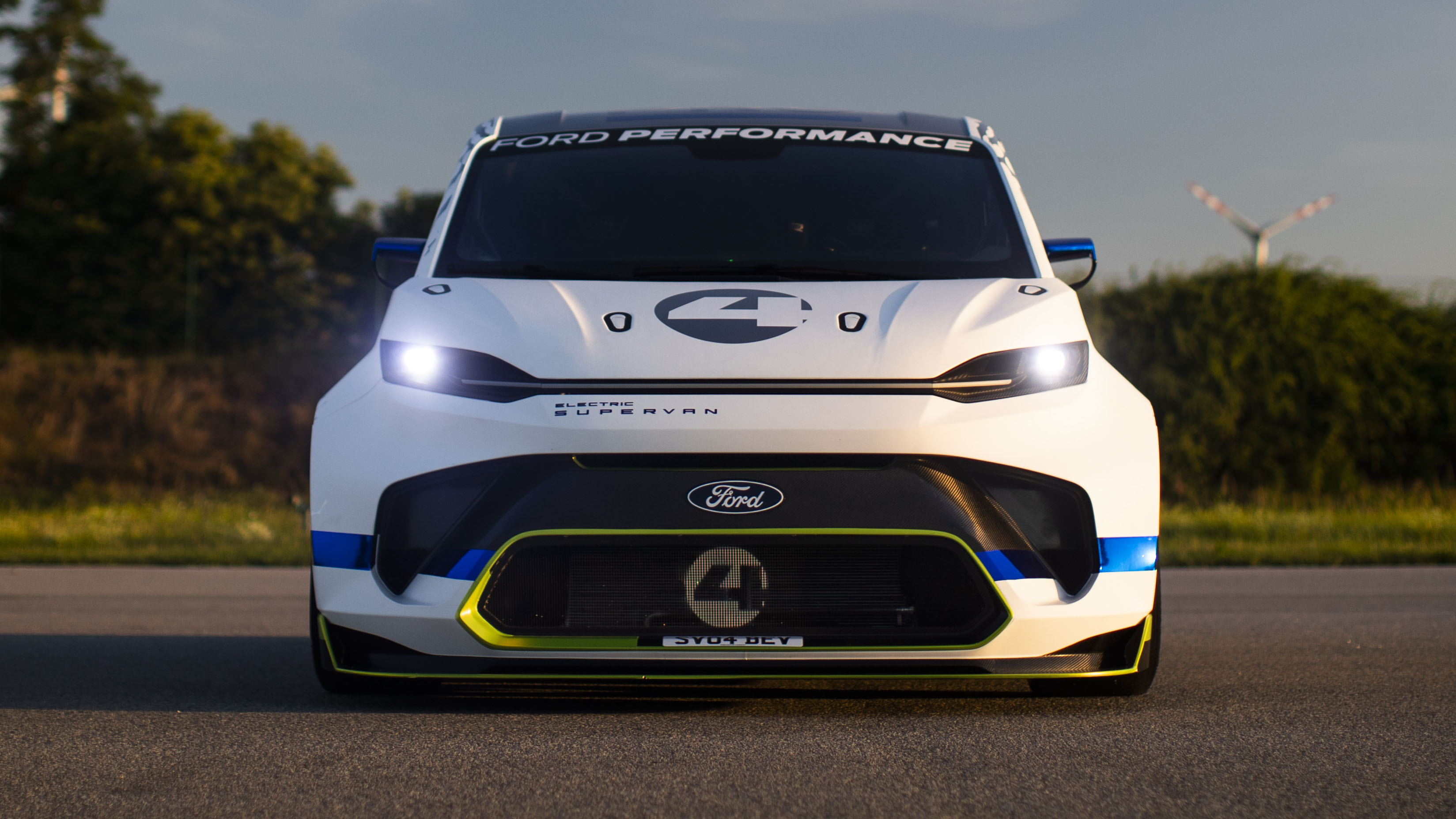 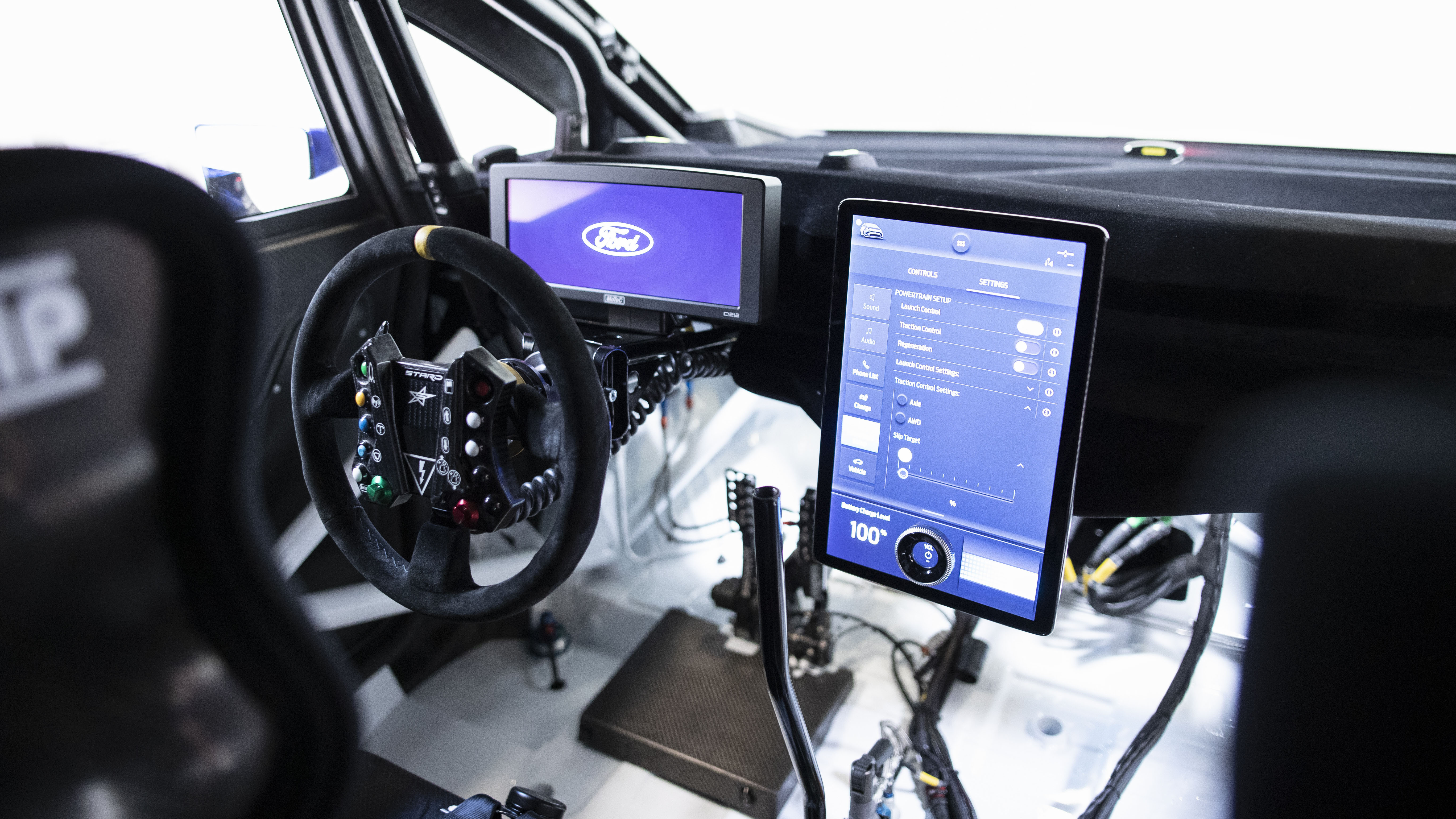 This utterly mad contraption is the new Supervan. The fourth time in the last 50 years that Ford has gone a bit giddy and decided to fit a Transit with a comically potent powertrain. It produces approximately 2,000bhp and 1,328lb ft of torque and, you guessed it, it’s fully electric. Official name: Ford Pro Electric Supervan… we’ll stick with Supervan 4.

Why now for the fourth instalment? You might remember the one-off Mach-E 1400 from 2020? A 1400bhp drift-tastic electric SUV designed to remind you the Mach-E was on sale. Ford has recently opened order books on the E-Transit, so what better tool for herding customers into showrooms than this? An E-Transit with over ten times more power than the showroom version, and bodywork to make a Transformer weep.

This project began with someone taking an angle grinder to an E-Transit Custom leaving the floor pan and battery slot, and not a lot else. On top of that grew a tubular space frame with bespoke front and rear subframes, clothed in an all carbon-fibre body. The best guess at kerbweight is two tonnes.

In the same battery slot as the donor car is a 50kWh, liquid-cooled lithium-ion pack – a trade-off between required range and unnecessary flab, although the battery size can always be expanded down the line if the application calls for it. Let’s face it, they’re not short on space. Total range as it stands? About 35km at race pace (or a lap and half of the Nürburgring) and we do mean race. There’s Alcon brakes - with steel discs, so they work in as wide a variety of situations as possible - double wishbone suspension and a full FIA-spec roll cage. There’s even mounting point for a detachable towbar to haul up to 2,250kg. 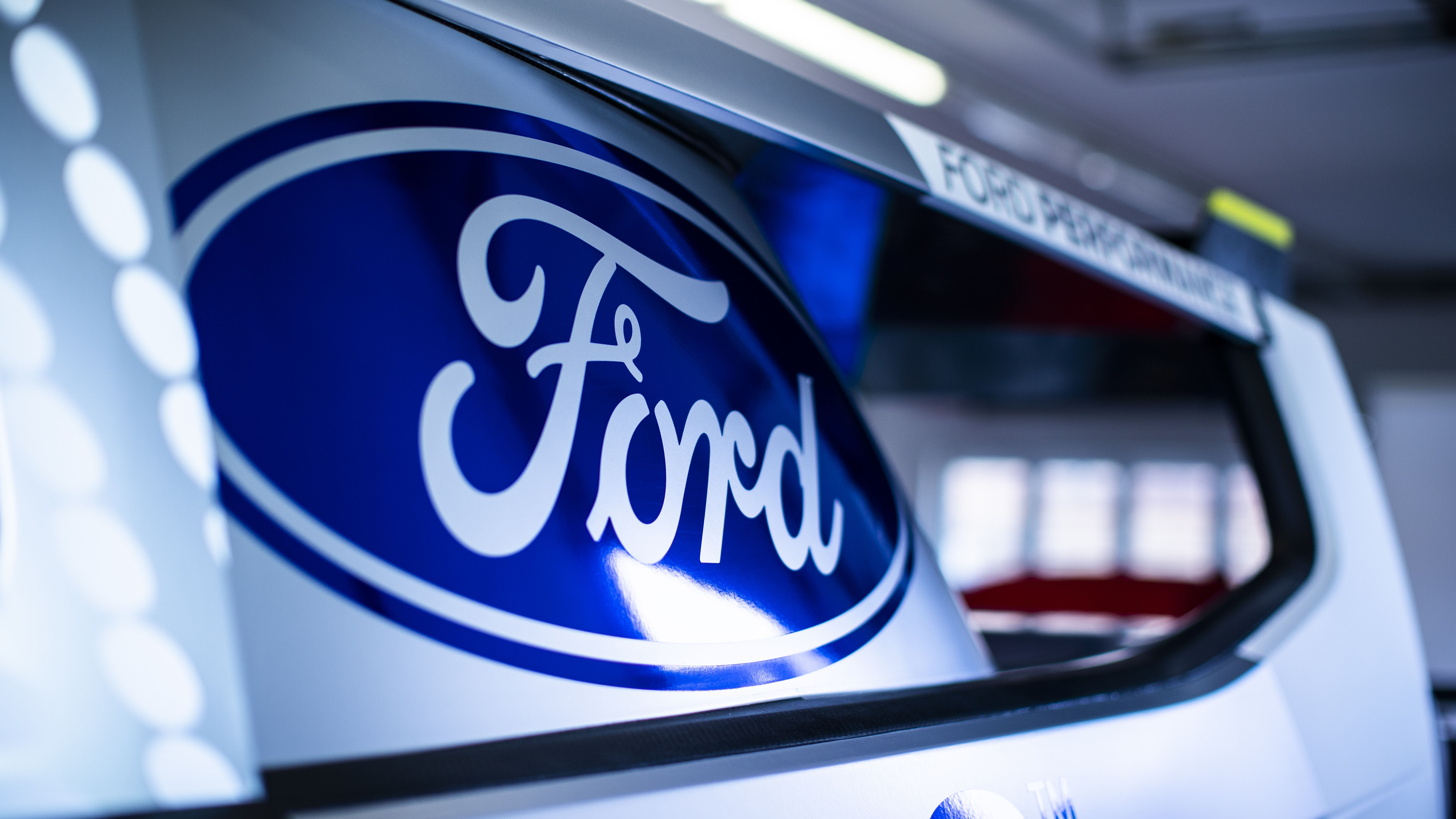 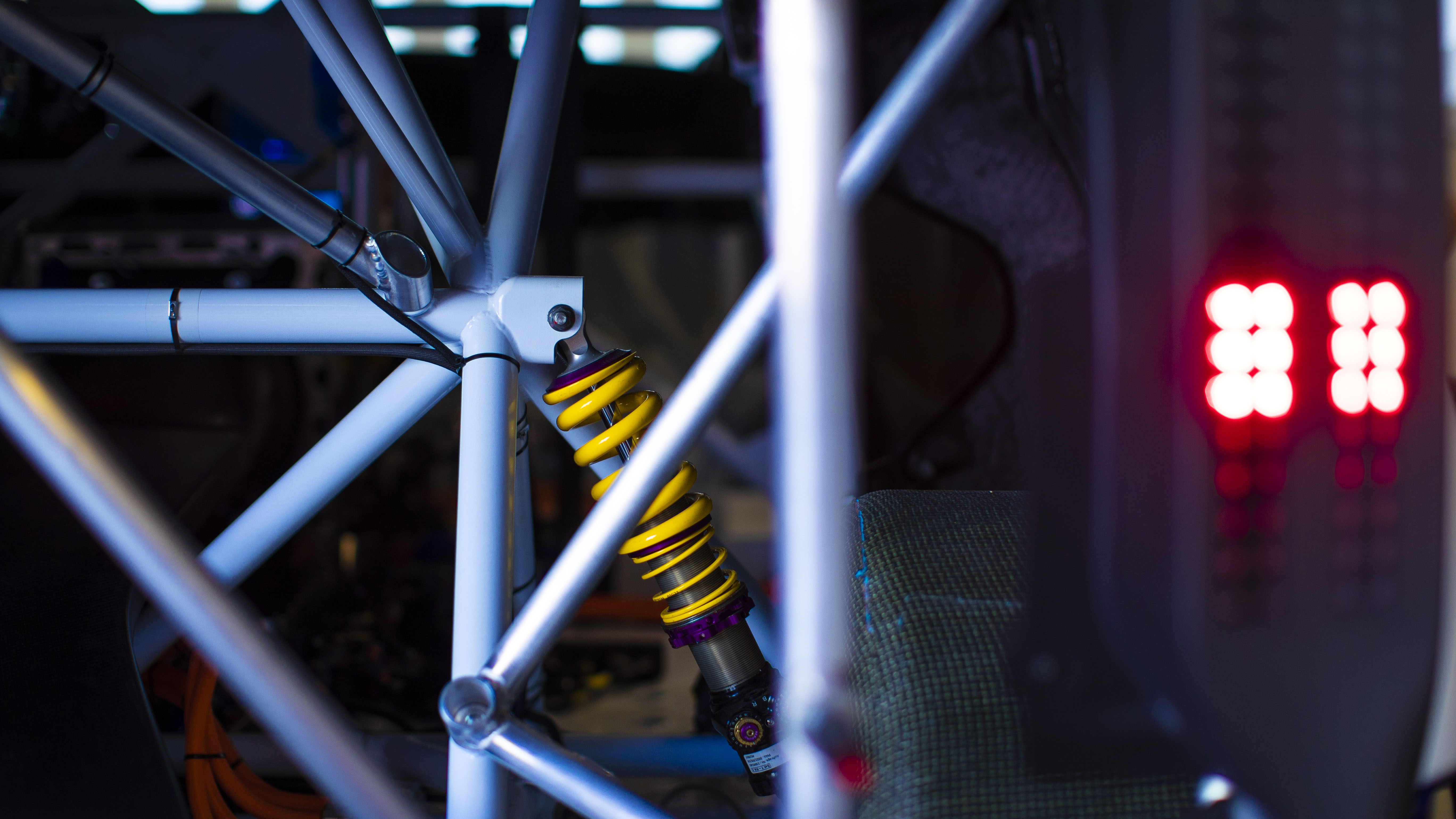 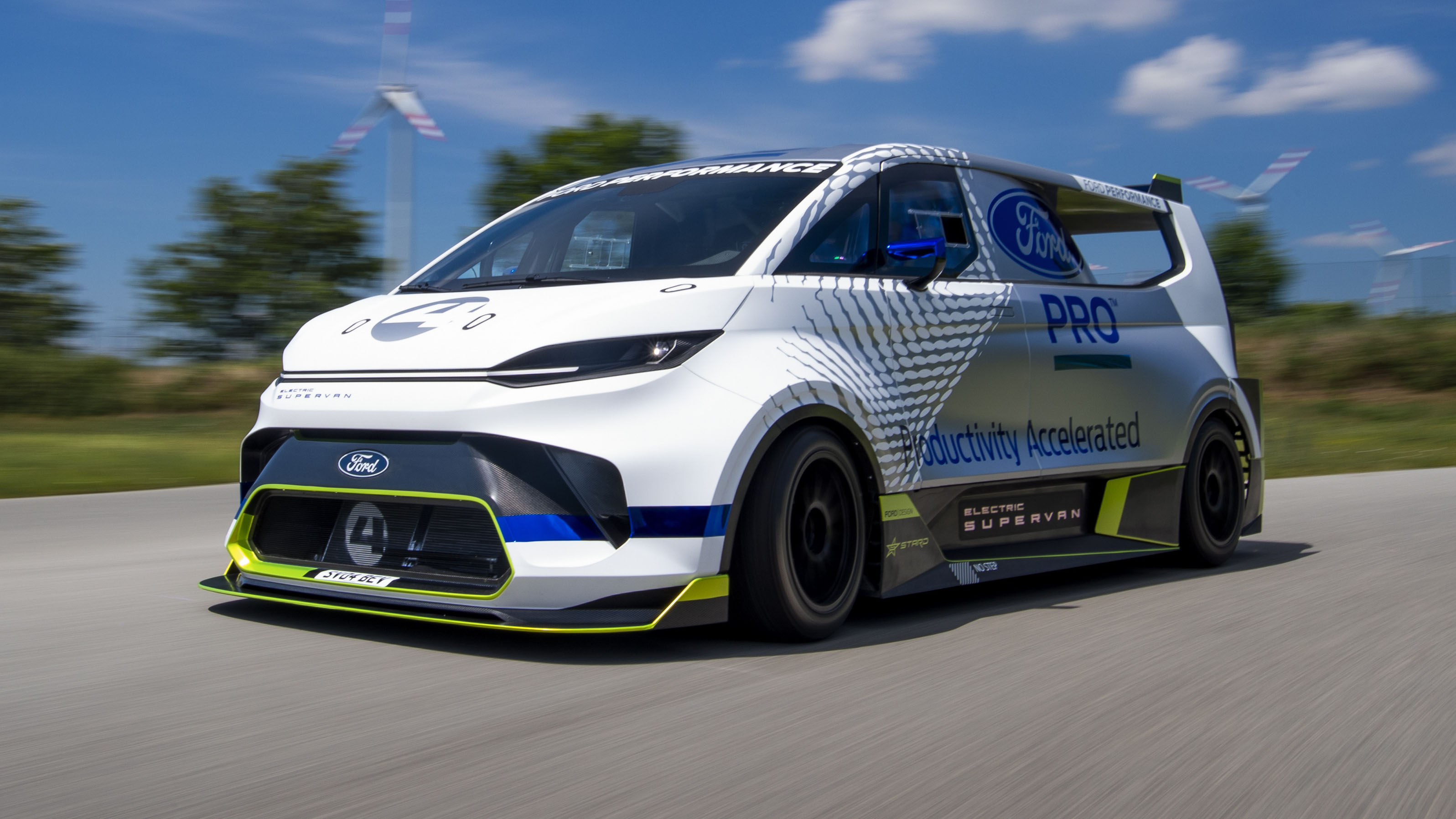 The battery feeds four electric motors, two at the front, two at the back, both bundled up with a diff and a gearbox on each axle. This means you forfeit infinite e-motor-per-wheel torque vectoring capabilities but gain flexibility. Don’t need the full 2,000bhp and want to save some weight? Just unbolt a motor or two and carry on. A single-speed gearbox on the front axle and a two-speed gearbox at the rear, like the Porsche Taycan, means lightning acceleration off the line (0-62mph in under two seconds) but also a top speed north of 200mph. Just imagine how quickly you could deliver parcels in this thing? Think about it Amazon, that’s all we’re saying.

Something with the frontal cross-sectional area of a bus stop is never going to be ideal, aerodynamically, but Ford has delved deep into its bag of tricks. To avoid all that air having to go over, around or under the van, a slot vent in the nose feeds air into a massive carbon-fibre tube that bisects the interior and exhales above the rear number plate. Then there’s the Ford GT-style air tunnels that clean up airflow around the back, and look utterly superb, ably supported by a front splitter, side skirts, a roof-mounted wing and a suspended rear diffuser. And it’s not all for bragging rights down the building site either – Ford claims 500kg of downforce at 186mph.

There’s also a hydraulic handbrake, which speaks volumes about Ford’s plans for The Van. The target is versatility, so it can be set up for hot laps, or to be a dragster, or to drift about roasting its tyres or to take a bit of rally punishment… and that’s the beauty with electric motors, the possibilities around where you send the power are endless.

READ MORE
Remember the SuperVan? ALL HAIL THE SUPERVAN

For now there’s only three modes built into the 15.5-inch screen pinched form a Mach-E – Road, Track and Drag – although Rally and Drift are coming soon. Delve into the settings sub-menu and you can really nerd out by telling the launch control what type of surface you’re on, or selecting your grip level on a sliding scale. Our personal favourite is tyre-cleaning mode (aka massive smokey burnout mode), which locks either the front or rear to let you spin up the opposing axle and give them a good scrub.

Supervan 4 will make its debut at Goodwood, ripping up the hill in the highly-qualified hands of Romain Dumas - current FoS hillclimb record holder in the VW ID.R, also two-time Le Mans winning legend and holder of the Nürburgring and Pikes Peak electric course records, also in the VW ID.R. As we said, qualified. Heading to the Festival of Speed? Just follow the clouds of smoke and smell of incinerated rubber, you’ll find Supervan in no time.