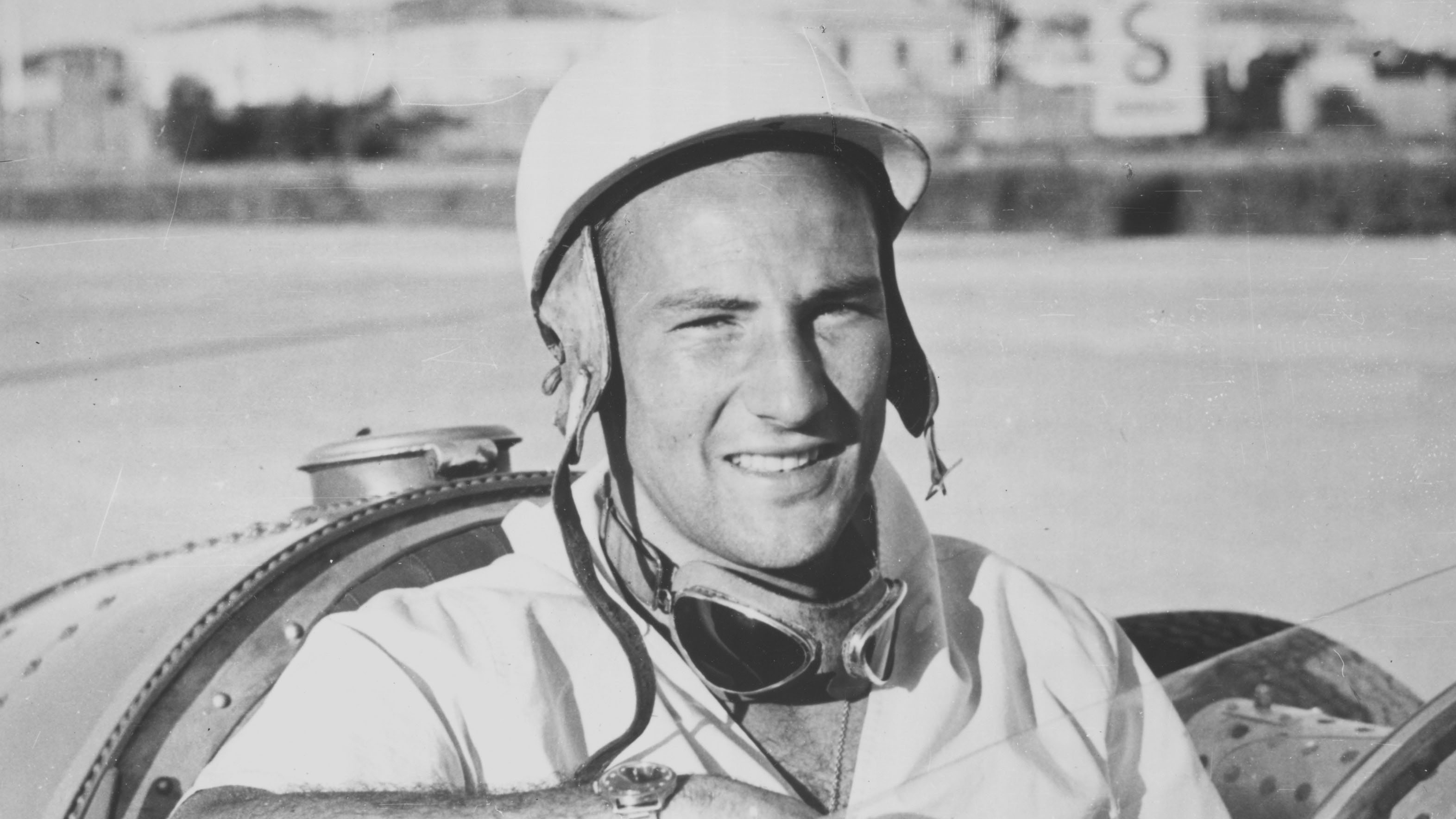 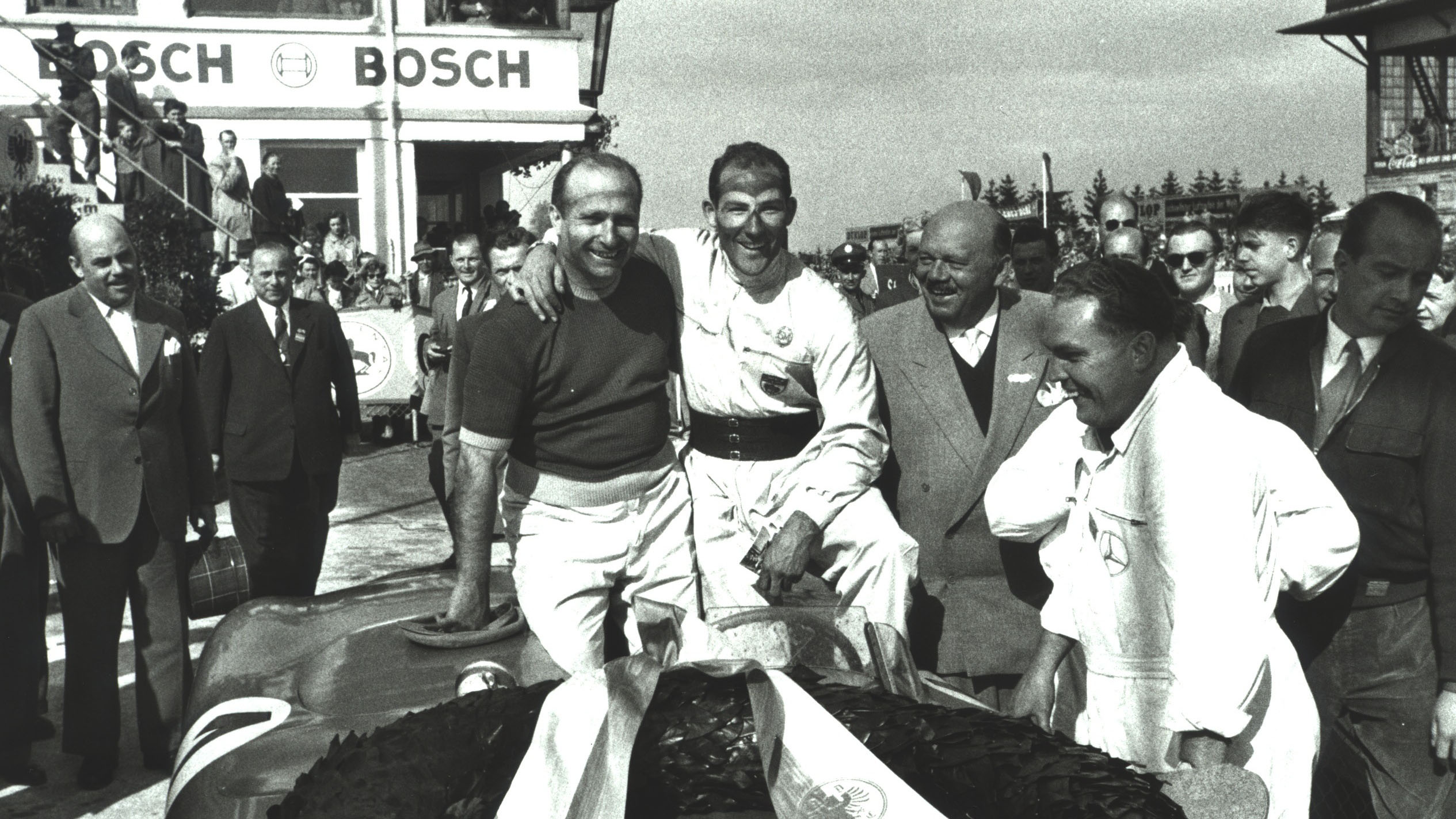 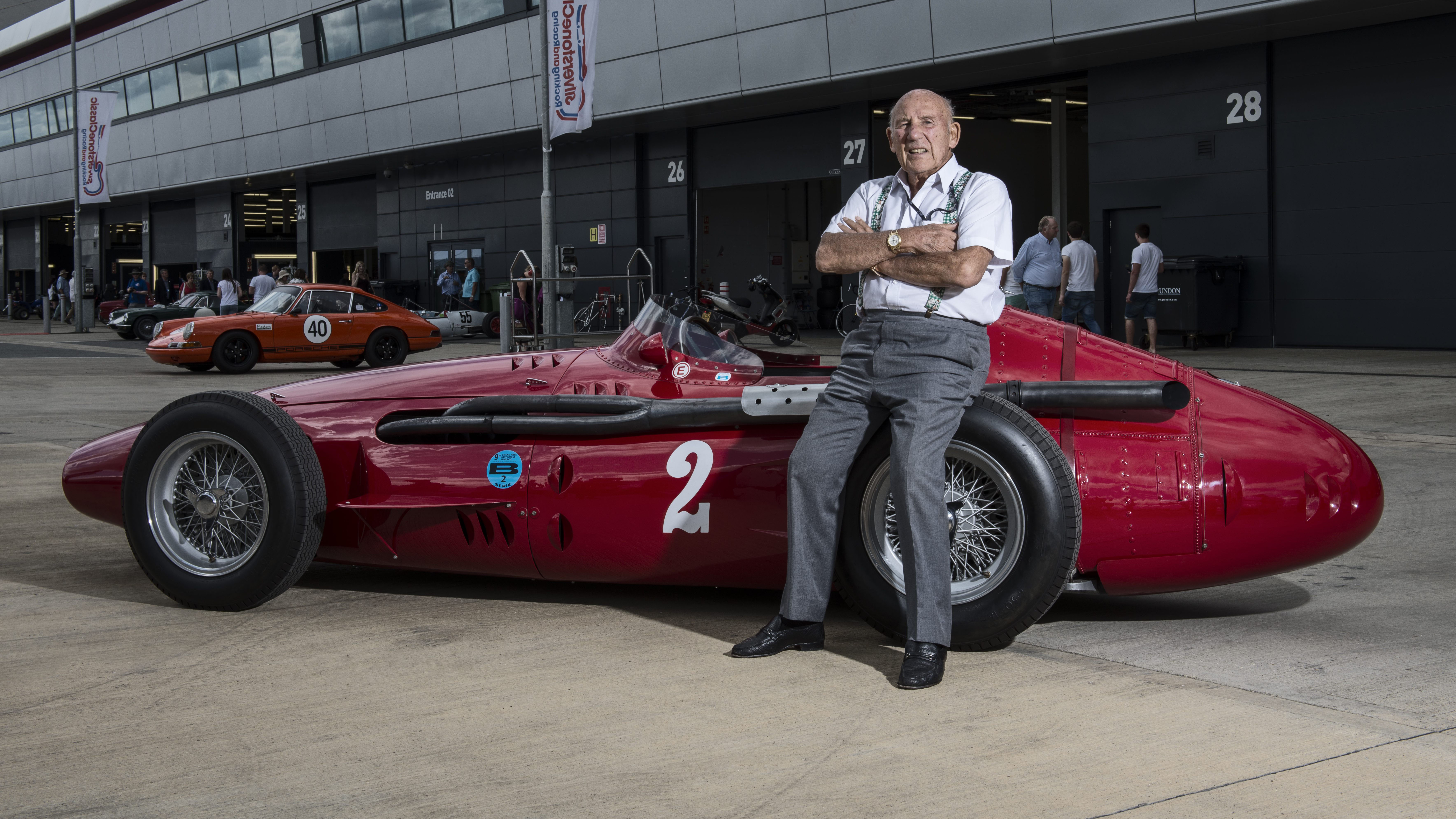 Sir Stirling Moss, one of the all-time British sporting greats, has died at the age of 90. His wife, Lady Susie Moss, told the Daily Mail in the early hours of Easter Morning, "He died as he lived, looking wonderful. He simply tired in the end and he just closed his beautiful eyes and that was that".

Moss retired from public life in January 2018, following a prolonged period of ill-health, having remained an active and hugely revered part of the motorsport world until that point. For many, he was the greatest British racing driver of them all, blessed with superhuman skills behind the wheel and a figure who cut a rakish dash out of the cockpit. His status in the pantheon of the greats is secure, and this despite having never actually won the Formula One world championship. Fangio rated him as the best he ever raced against, and Enzo Ferrari, who was ready to hire him for the Scuderia, agreed.

Sir Stirling Moss was born in London, on 17th September 1929, the son of a dentist who himself had been an accomplished amateur driver. He began his career driving his father’s BMW 328, and proved his mettle in a variety of single-seaters. Shortly before his 21st birthday, Moss won his first major race, driving a borrowed Jaguar XK120 in the 1950 RAC TT in Dundrod, Northern Ireland (an event he would become a specialist in, winning it seven times in all). Mercedes-Benz motorsport boss, the indefatigable Alfred Neubauer, recognised his huge potential and encouraged Moss’s manager, Ken Gregory, to run a privately entered car; he duly raced a Maserati 250F in the 1954 Formula One season.

"My father went to see Neubauer. I was in the US. He asked him if he’d give me a test," he recalled. "He bought a Maserati 250F, and the first I knew about it was coming back on the Queen Mary, when we spoke on the phone. He’d used my winnings to buy it. Now the chips were down, because I’d only been driving moderate cars up until then, I hadn’t been in a car capable of winning. Well now I had one…" 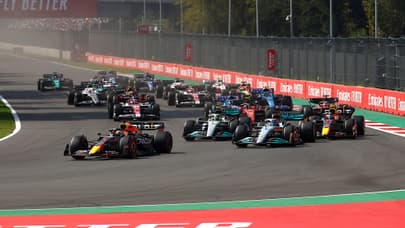 He was often deliriously fast and scored a win in the non-championship International Gold Cup at Oulton Park. Promoted to the works Mercedes team in 1955, he scored his first world championship win in the British Grand Prix at Aintree in July 1955. That same year he won the Mille Miglia in a Mercedes 300 SLR, covering those sainted miles in that eternally impressive time of 10 hours seven minutes and 48 seconds, averaging almost 99mph. The greatest ever competitive drive in a racing car? Many believe this to be the case.

Sir Stirling had the air of a Spitfire ace about him, and walked the tightrope more skilfully than almost anyone else

He went on to race for Maserati, Vanwall, and Rob Walker in Formula One, four-times a runner-up, three times finishing in third place. The statistics show that he won 16 of the 66 Grands Prix he competed in, but more impressive even than that was his immense versatility. He won a total of 212 out of the 529 races he started, in 85 different classes. In his Fifties heyday, sports car endurance racing was equally as thrilling – and important – as F1, and Moss was untouchable. He was also one of those priceless drivers who could out-perform the machinery: he cites his win in the 1961 Monaco GP, during which he held off three hard-charging and superior Ferrari 156s in his uncompetitive Lotus 18, as his greatest ever. It really is worth looking up the list of races he won; it will take you some time to read through them all.

To a younger generation largely immune to the cruelty of motor racing, Moss’s glory years coincided with the sport’s most dangerous times. This was an era when drivers travelled the world, raced everything they could lay their hands on, and did so acutely aware that one or more of them might not be around the following weekend. Sir Stirling had the air of a Spitfire ace about him, and walked the tightrope more skilfully than almost anyone else. For him, danger was a key component, and he made no bones about it.

"World War II was still fresh in people’s minds and that made a big difference," he once told me. "At that time death was quite common, we’d lost God knows how many people in the War. So if somebody was killed doing something, well it was unfortunate but the view was that it happens. Now it just wouldn’t be tolerated. I lost a lot of friends racing and it was awful.

"The only way one could accept it was to say, they knew the danger, I knew the danger, I loved it and they were loving it and they died doing something they loved. That’s how you make yourself accept a difficult situation. You’ve just got to have the confidence to believe it isn’t going to happen to you. It may be a foolhardy attitude, but you’re not going to be able to live with it otherwise. I mean there was nobody else in the car holding your foot down. I didn’t want to die, I had no death wish. I thought I would drive as fast as I feel safe and that was my limit."

Fortunately, his limit was rather higher than most, although his competitive career was cut short when a suspected defective throttle led to a violent crash during the Glover Trophy at Goodwood, on Easter Monday 1962. He was in a coma for a month, paralysed down his left side for six months, and knew instinctively that the game was up when he got back into a Lotus 19 and simply didn’t feel as fast. 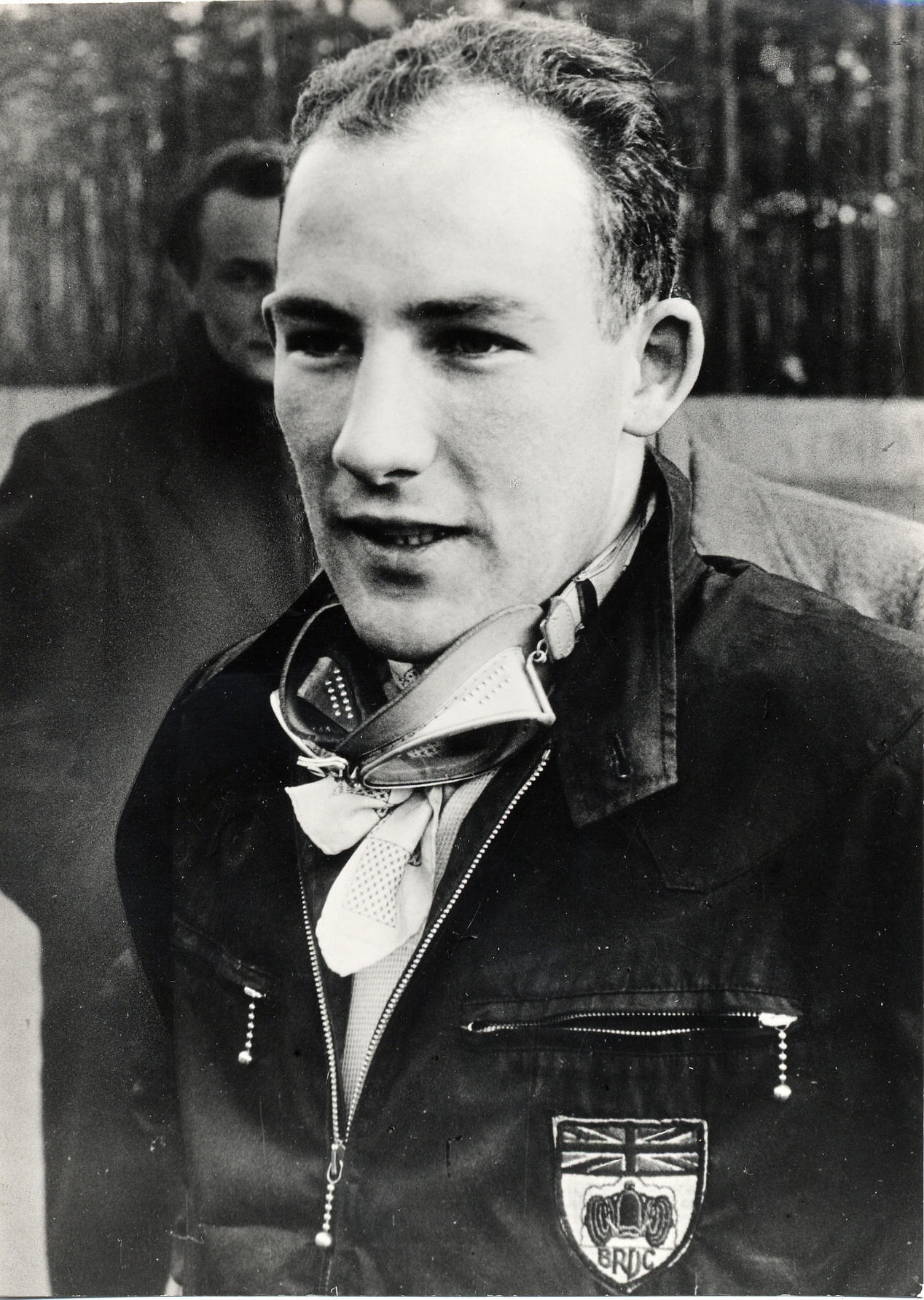 "One has to be able to speak the language of a car," he told me in 2009. "That certainly makes a difference between one driver and another. Some drivers can speak to cars… If I hadn’t had the accident, I’d have gone on until I was 50. God it was annoying. I had to work for a living! There is bravery in knowing when to stop. That’s the most difficult thing to do. I’d had shunts before, and broken all sorts of things, but they hadn’t mattered. But that one did. And so that was that. You know nothing about anything, so there were only two things you can be: an estate agent or an MP."

His retirement robbed the sport of the tantalising union between its best driver and its most storied team: Moss was in talks to drive for – or more accurately with – Ferrari, and the Old Man had even agreed to let him race in a car painted blue. "Everything was organised. I was going to have a sports car and a Formula One car, and he was going to maintain them and we had anything we wanted, we would have been an extension of the factory team," Moss told me.

He was an avowed patriot and choosing to drive for British teams and privateers when they weren’t front runners doubtless held him back. But he could – and should – have won the F1 title in 1958, when fellow Brit Mike Hawthorn had apparently driven his Ferrari off the track and illegally reversed back onto it during the Portuguese GP. It was Moss who vouched for him, a move that allowed Hawthorn to keep his second place finish. He went on to win the driver’s title that year by a single-point margin, and became the first British F1 champion. Sir Stirling may have been a superhero racing driver, but he was also a gentleman.

"That wouldn’t happen today, and couldn’t happen today," he explained to me. "Different times, different beliefs. Everyone talks now in the context of a World Championship and it really spoils racing. I remember watching a driver a few years ago only trying to finish fourth because that gave him the title. I drove 52 races in one year, we’d race sports cars, all sorts of things. At Le Mans, Rouen, wherever, in sports cars or whatever, it didn’t make any difference."

He kept hugely busy, and never truly retired. Before even Sir Jackie Stewart, Sir Stirling understood the power of his brand, and was an astute businessman. His Mayfair house, bought in 1961 as a wreck, was famously tricked out in the sort of gadgets that would have delighted James Bond movie production designer, Sir Ken Adam. He could sit in his ground-floor office and push a button to run a bath several storeys above. He kept detailed scrapbooks of his career (and apparently another for his beloved ‘crumpet’) and kept all the notepads from his various races. I flicked through them once, and marvelled at the forensic detail within. His memory remained pin-sharp, his anecdotes jaw-dropping.

If a driver has to call on bravery, then he is in the wrong business

"The Mille Miglia was the only race that really frightened me, at least until the moment the flag fell," he told me. "There were hundreds of cars participating, although I didn’t have to overtake them because half of them fell off. Italian hairdressers you see, with go-faster stripes.

"I remember going over a hump-backed bridge. Jenks [his co-driver] had given me the signal that it was OK. Well we went over this damn thing at 150 or 160mph. In practice, you see, we probably hadn’t gone any faster than 120mph. Well, at 160mph we took off and the bloody thing was flying. It was a dead straight road, but I knew it was a bit dodgy. We were airborne for quite a few seconds. The steering obviously went a bit light… and we landed and Jenks and I looked at each other and just went [quizzical expression crosses his face]. We certainly had our moments…

"Is it my greatest achievement? Of its type, yes I suppose so. You can’t really compare it with, say, when I won the Monaco GP in 1961. It’s about confidence. You have to be confident in your car as well as your own ability. I was 25 years old at the time, and terribly fit. I never did any exercise but I’d be racing three days a week. It added up to something like 250 days a year competing in a car. If a driver has to call on bravery, then he is in the wrong business. The strain on the individual would be enormous if you felt that you needed courage to get through every corner."

TG.com sends its condolences to Lady Susie, and to the Moss family. Sir Stirling may now have gone, but his was a life lived at full, thrilling velocity. RIP, old boy.