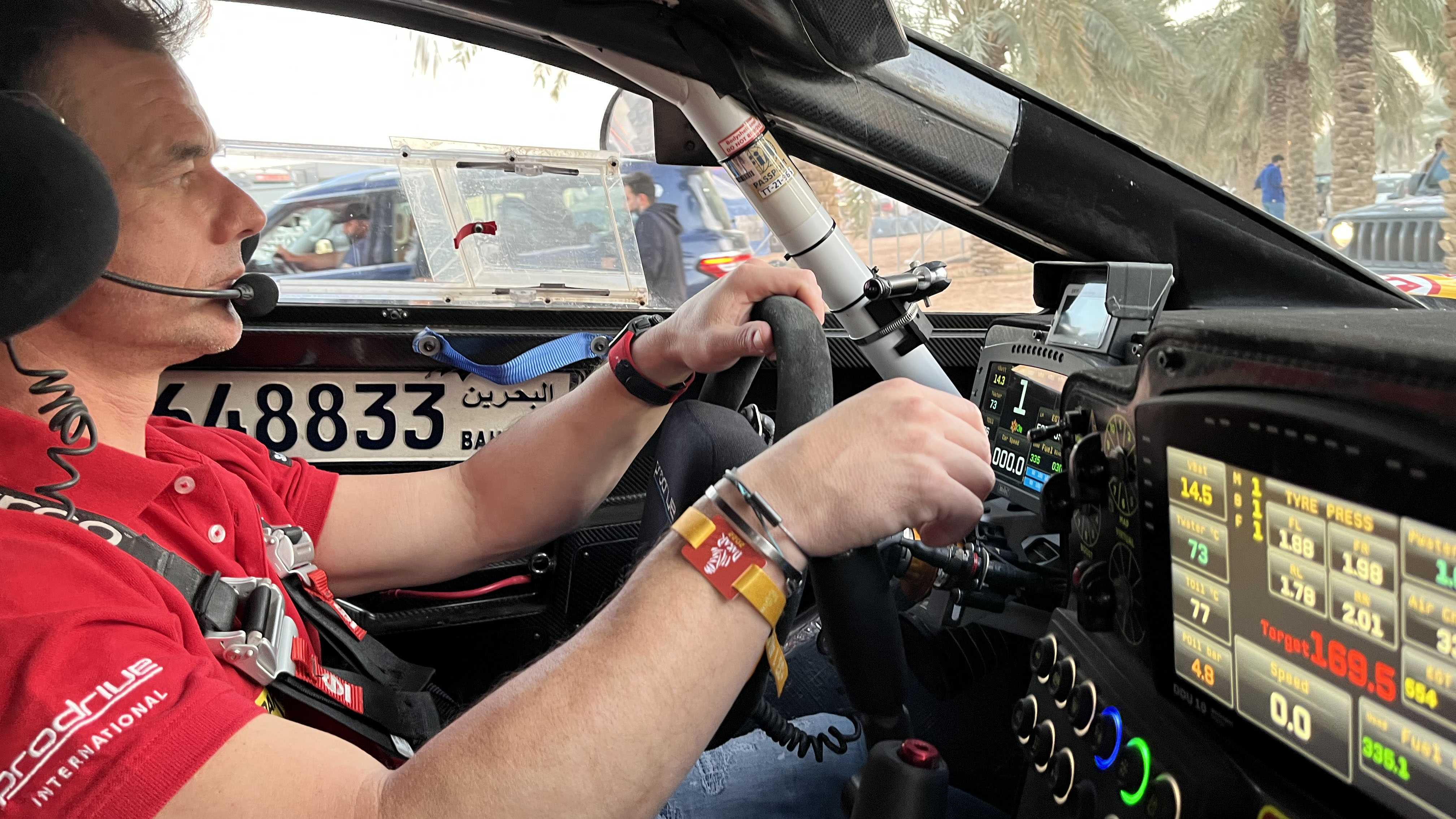 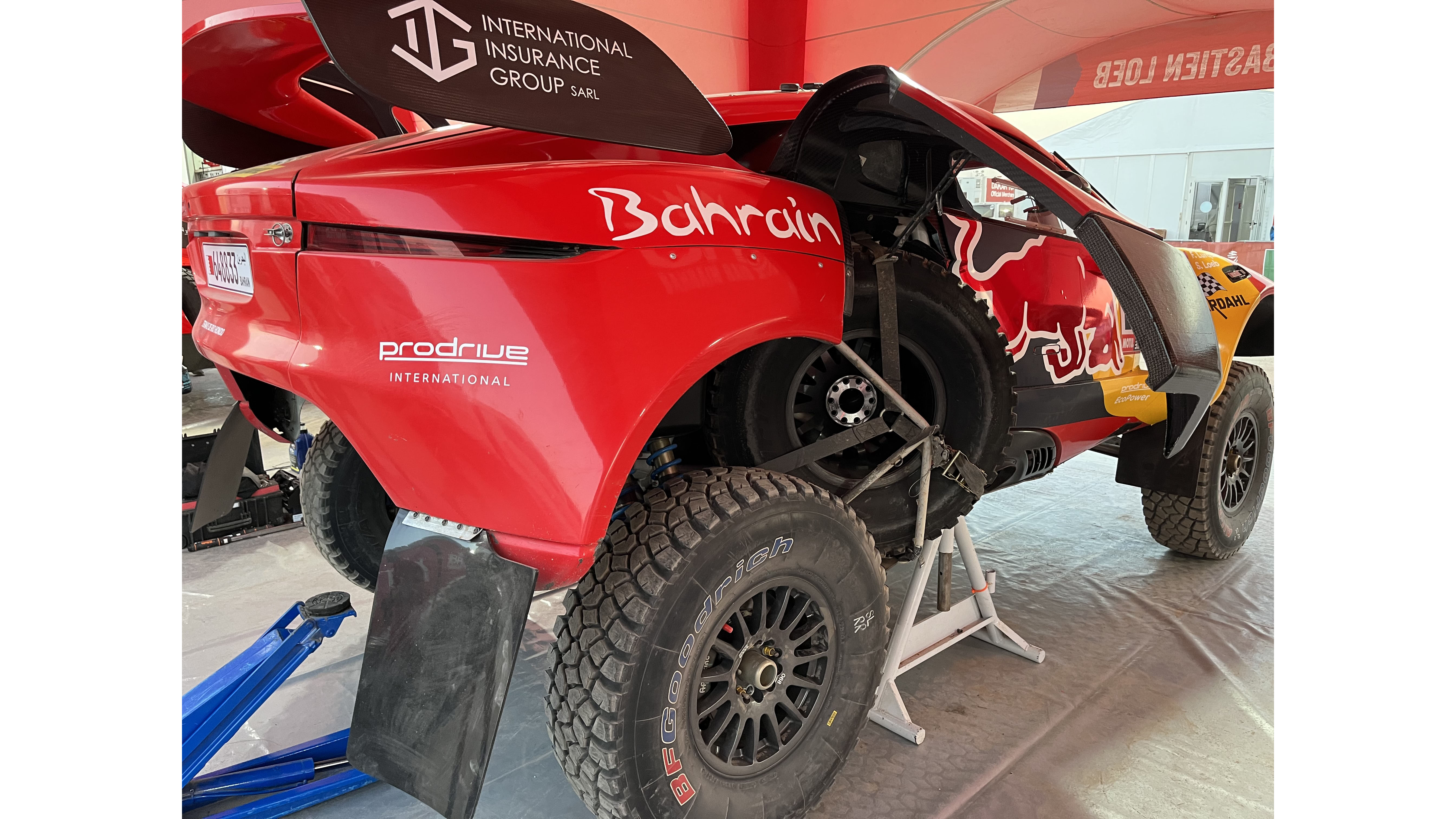 The Dakar bivouac is the temporary home to what’s effectively a giant competitive carnival, where upwards of 3000 hardy souls have gathered to joust with the desert. Back in the old days, it was basically a few tents and nutters on motorbikes. Now it’s a massive operation, the star turn this year coming from Audi’s genuinely space-age and highly competitive RS Q e-tron. One of the team engineers tells me that this rally is basically the Le Mans 24 hours, every day, for a fortnight, across terrain that wants to rip the guts out of your car and stash sand in every orifice.

Sébastien Loeb’s been here on five previous occasions, the high points coming with Peugeot in 2017 and 2019, when he finished second and third. He’s probably the biggest name competing in 2022, still physically possessed of that remarkable force-field the world’s top athletes seem able to generate. The French almost certainly don’t bother with Weetabix, but whatever they eat, Loeb’s certainly had his.

In 2022, as with last year, he’s kicking things off driving Prodrive’s spectacular BRX Hunter, newly pumped up in line with the latest T1+ rules. It’s 300mm wider, sits on 37in tyres on 17in wheels, and has a whopping 350mm of suspension travel thanks to double dampers on each corner (good for body control, less so for weight). It’s a huge, forbidding looking thing, not quite a truck but some distance away from regular car. Having driven the gen-one version of the Hunter – at the tank testing facility at Bovington in Dorset last July – I have a good idea of how it goes, and of what a reverse Tardis it is. Huge outside, snug as you like within, with a sea of complicated looking controls.

"You are coming with me, yes?" Loeb says, our conversation commencing from either side of the BRX’s cockpit. The words are clipped, Gallic, as rapidly dispensed as bullets from a machine gun.

You need to be something of a gymnast to get in, which is handy for Sébastien Loeb because he used to be one. He wanders round the car and wedges his right foot on the edge of the sill by the huge front wheel arch. "This is the best way to do it," he tells me. Not being a former gymnast or professional racing driver, the risk of looking like a monumental idiot is high. But I do as I’m told and manage to lever myself into co-driver Fabian Lurquin’s seat without incident or injury. This moment of relief is off-set by the realisation that Monsieur Lurquin must have the hips of a female supermodel.

For someone so very practiced in the art of going extremely fast, Loeb is a low energy kind of guy.

He’s always fascinated me, not least because he’s driven everything. He finished second at Le Mans in 2006, has contested the WTCC, the FIA GT series, the World Rallycross Championship, and even defeated the likes of Michael Schumacher and Tom Kristensen to win three Race of Champions events. A handy ego boost.

Back in the Noughties he also showed serious pace when he tested Red Bull’s RB4 Formula One car. I interviewed him in the Silverstone café before one of those tests – I recall him ordering a full English breakfast – and in the pit garage in Barcelona during the second. The tantalising prospect of the reigning WRC champion switching to F1 in 2009 was only kiboshed by the dastardly rule-makers at the FIA when he was refused a Super Licence for a lack of circuit experience on his way up the motor racing food chain. Really? He wanted to do it, Red Bull wanted it to happen, we all did. But it wasn’t to be.

That was then. Back in the bivouac, we ease out of the immaculate BRX tent – Prodrive is a stickler for appearance, but the whole lot can be dismantled and moved incredibly quickly, and Dakar demands it – and head through the paddock. The Hunter is fairly agricultural at low speeds, with a chuntering transmission and various whirs and buzzes. The Ford EcoBoost engine sits beneath our feet and it’s the same as the unit in the GT and Raptor pick-up; it’s making a mere 400bhp here according to Dakar ‘balance of performance’ regulations. There’s a 500-litre fuel tank behind us, which isn’t as environmentally ruinous as it sounds because Prodrive has a trick up its sleeve: it has developed a sustainable fuel with a British specialist called Coryton Advanced Fuels. It’s a generation 2 biofuel made from agricultural waste and low-carbon efuel. It’s currently expensive to make sustainable fuel – it relies heavily on renewable energy for a start – but the result is an 80 per cent reduction in greenhouse gases. Got to start somewhere, I guess, and Dakar’s 5,192-mile distance is a hell of a proving ground.

I’ve already spoken to Loeb about motorsport environmentalism during Extreme E rounds in Saudi Arabia and Greenland. As we exit the Riyadh bivouac – there’s a wave to a young lady from another team as we go – you sense that he doesn’t really care what’s fuelling the car as long as it’s fast and competitive. Which this year’s bigger and more badass BRX Hunter clearly is. Loeb, famously, is a man of few words but a shakedown blat on the service roads will have to do. We’re on an intercom whose clarity is gobsmackingly good. Gotta be that given the job at hand. So, how much better does the revised car feel?

"The team has more experience, the car is really good, last year we struggled to get into a rhythm compared to some of the others," he says while prodding the outsized selector for the sequential ’box (back to change up, push forward to change down). "We have a fast car that’s able to win stages, and it feels much better on the bigger wheels. There’s greater stability, and more comfort over the stones because the tyre is working much better. The previous ones were too small for the size and weight of the car and we had to raise the pressures to avoid punctures."

Pressures. Punctures. Got you. Turns out, we don’t need to slow down so much for speed bumps. Gulp.

You can play with it like it’s a rally car

"It’s wider so it’s more stable," Loeb continues, as if on a run to the local Carrefour for cigarettes. "The previous car was high, narrow, on small tyres. You can really play with it now, and this is a car that weighs more than 2.5 tonnes when it’s fully fuelled. As it is now because we have the fuel for tomorrow’s stage on-board. Yet you can play with it like it’s a rally car."

He proceeds to demonstrate this as we arrive at a roundabout. There’s no-one else around, and he flicks the red enormo-car sideways like it’s a Mazda MX-5 or something. Look, it’s Sébastien Loeb, what could possibly go wrong? The man has an inner gryo uniquely calibrated for this sort of thing. Between my frankly juvenile giggling, I ask about the unique demands of Dakar. Surely you can’t go flat-out the entire time?

"Of course you want to bring the car home in one piece but you have to push if you want to keep up with guys like Nasser [Al-Attiyah, the Qatari Dakar specialist currently leading the rally in his Toyota Hilux). So you need to push quite hard. But you also need to bring everything together. You need to avoid making the big mistakes. Getting lost is a mistake that happens to everyone, because you’ll arrive at a junction really fast and miss it. It happens. But the point is you have to realise that and deal it with it quickly, go back, maybe lose one or two minutes."

Which is better than losing the 20 minutes or so Loeb and Lurquin suffered earlier this week after a navigational mishap. Or indeed the 37 minutes that went out of the window courtesy of a mechanical problem. With only a day left to run and the gap to Al-Attiyah sitting at 33 minutes and 19 seconds, you can see how costly these things can become. Not that Loeb is blaming his co-driver (remember how he fell out with long-standing WRC partner Daniel Elena?)

"Fabian is a clever guy, we’re starting to build our relationship. We have the plan, we understand the navigation, if we get lost we know what we need to do, it’s really frustrating… when you have a feeling that the way point is… just there, you know? The point is, we know we shouldn’t drive about everywhere like we did."

There’s a sudden burst of acceleration. Prodrive is working on a ‘civilian’ version of the Hunter that’ll cost £1m-plus but will be packing significantly more than 400bhp. That’ll be one of 2022’s hot tickets, mark my words. What about the rhythm he alluded to? Exactly what do you need to do in terms of driving style to survive the Dakar?

"It’s really important to look as far ahead as possible. Sometimes you won’t be at the limit of the car because you can’t see beyond the next crest. If you’re flat out it might work five times but then on the sixth there’s a huge bump or dip behind it. You never know. You have to push as hard as possible but only according to what you can see. Dakar, Le Mans, WRC, they’re all very different from each other. Dakar is a big rally, it would be a big achievement to win it. For the Dakar you need to bring everything together. That’s the challenge."

We’re back within the bivouac now. Loeb pulls on the big hydaulic handbrake and spins the BRX perfectly to a halt, perpendicular to his slot. "That’s a cool way to stop," I say, giddy as a little kid. "It’s the best way," he replies. 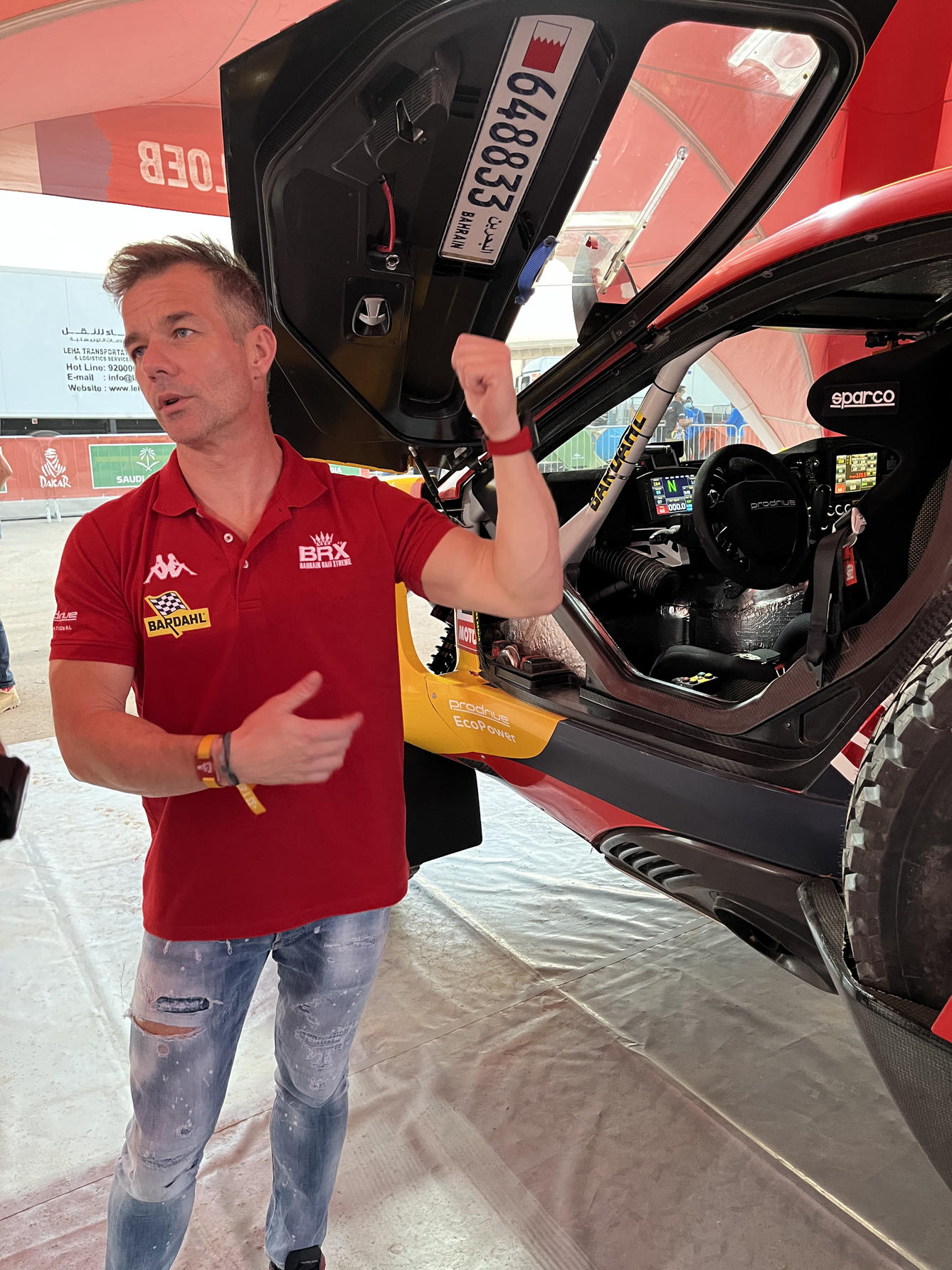