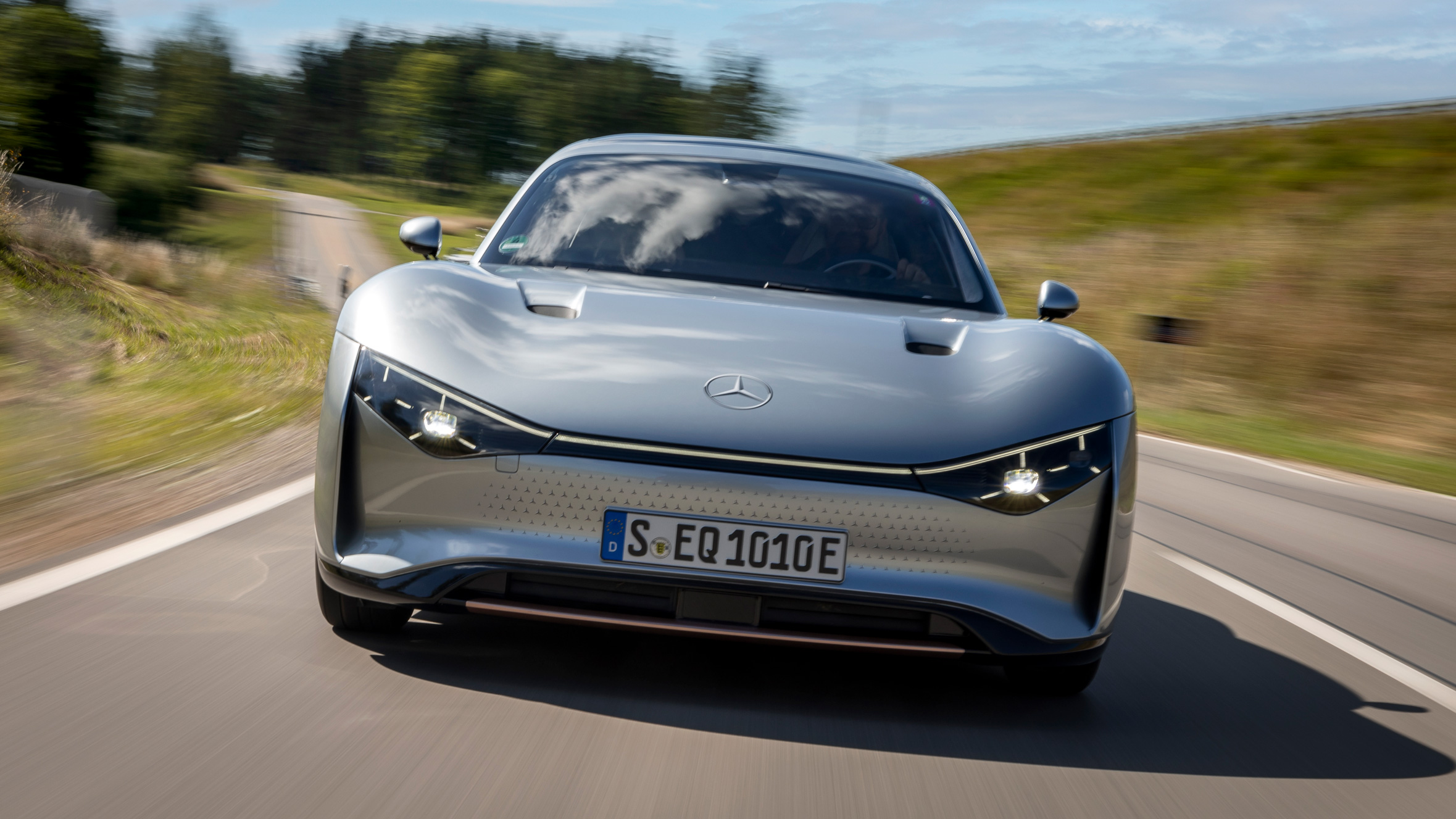 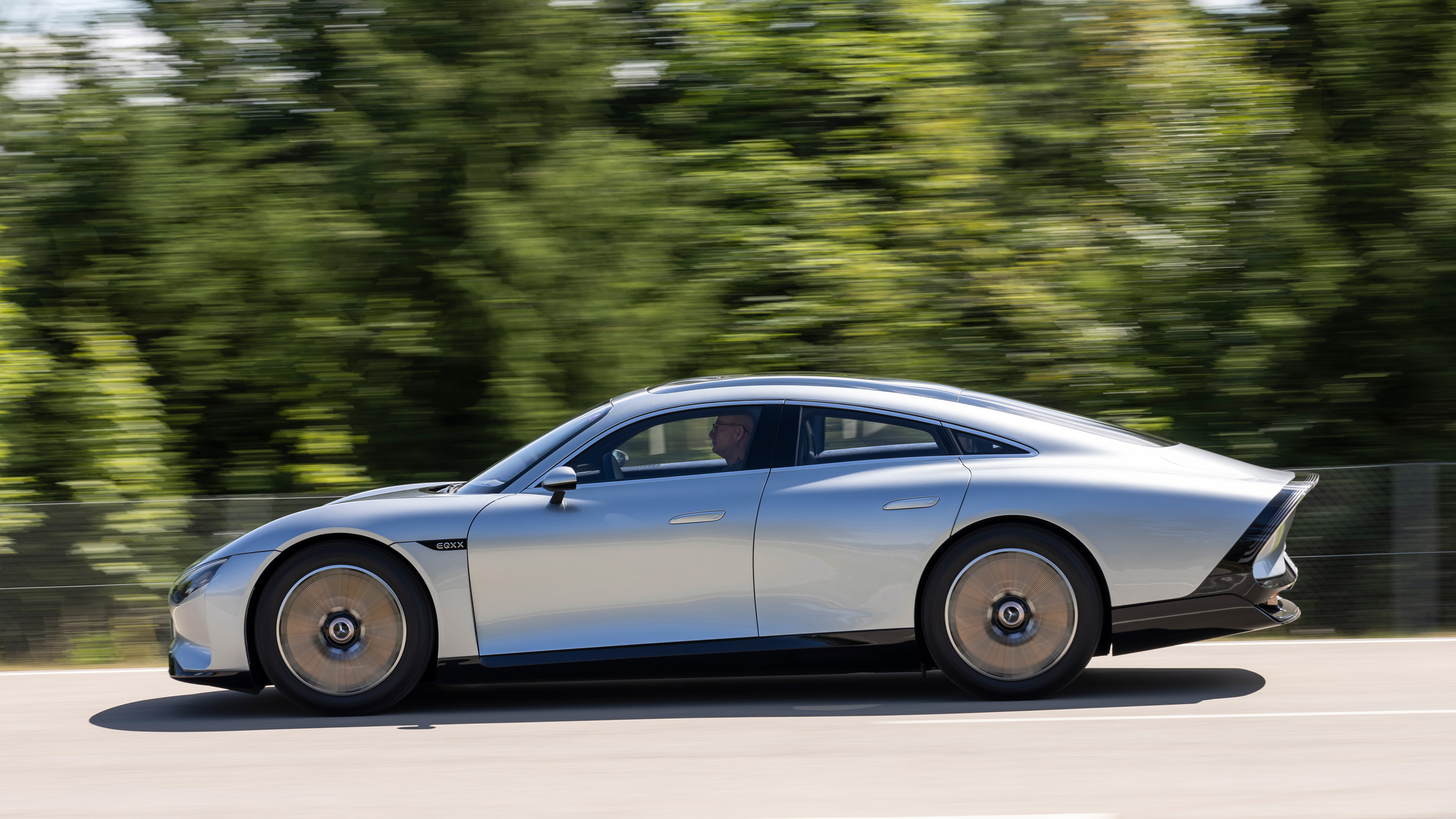 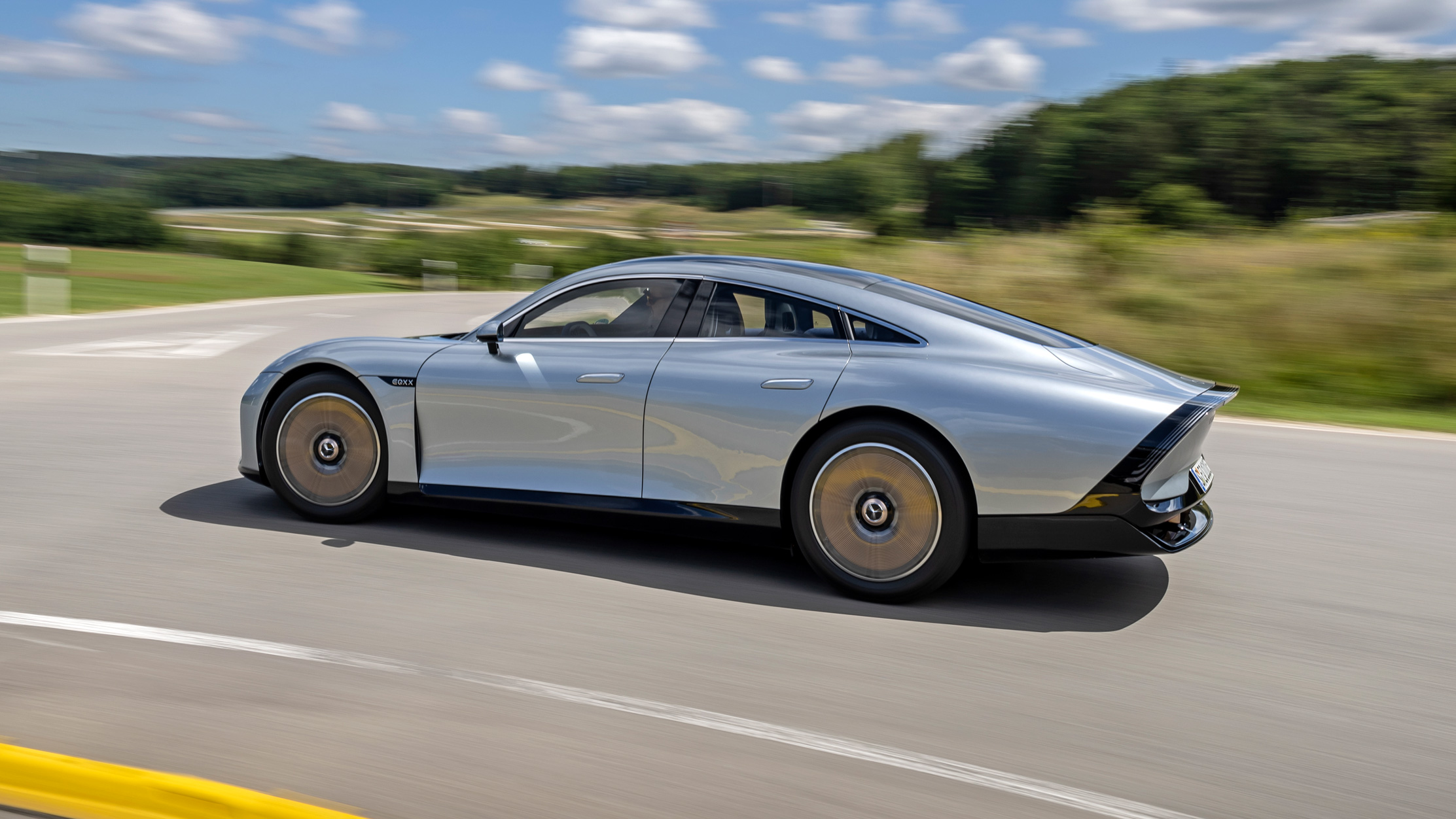 In the literal sense, yes. This is the Mercedes EQXX, an intriguing test bed for an electric car that uses extraordinary efficiency, rather than colossal batteries, to achieve long range. Like, 750 miles of long.

The best way to boost efficiency is to cut drag. At motorway speed, almost two-thirds of the battery energy in a normal electric car is used in pushing it through the air. Cut that – and the EQXX absolutely slashes it – and you're well on the way.

Via both conspicuous innovation (an extending rear diffuser) and obsessive detail work, its drag coefficient is just 0.17, and the frontal area is also small. Multiply two small figures together and you get a really small one.

The EQXX also has a battery and drive system developed in partnership with the UK-based Mercedes-AMG Formula One and Formula E teams. Their involvement was also aimed at extreme parsimony with the electrons, rather than at providing tyre-shredding performance that no-one uses.

Presumably all these are unsubstantiated computer-modelled claims for a concept car?

Nope, it's real and it works. It recently drove without a recharge from Stuttgart in southern Germany to Silverstone in Northamptonshire. It got there with charge to spare, so they went on a detour up the M1 and back. Then Mercedes Formula E driver Nyck de Vries jumped in and did 11 laps of the Grand Prix track, and I'm told he wasn't hanging around.

Total for that trip was 751 miles, at a healthy average of nearly 55mph. And overall it got 7.5miles per kWh. If I were doing that in a normal, smallish EV I'd expect to get around 3.2m/kWh and need four recharge stops.

Advertisement - Page continues below
READ MORE
The Mercedes Vision EQXX has driven over 1,000km on a single charge

Still, it's a one-off test car, so I'm guessing it's a clattery, uncomfortable, slow science-project to drive?

Not at all. It feels amazingly well-developed. Prototypes usually rattle and grind, but here the motor is smooth, the electronics don't hum, and the suspension is refined.

Although the battery holds almost 100kWh, the EQXX weighs just 1,755kg. That affects everything. And the minimised drag affects nearly everything, especially at speed.

I'm doing about 50mph on a long straight road that's actually slightly downhill, but so slightly that it looks level. I lift off the accelerator. Absolutely nothing changes. On we go. The speedo remains fixed. Oh wait. It just gained a digit. The sheer absence of resistance here is uncanny.

You can of course click on paddles to slow the car by recuperation, and in fact in the maximum setting it'll pull itself quite vigorously to a stop. You really very seldom need to touch the brake pedal. But when you do, it's firm and decently progressive. Better than, say, a Prius's.

Having plenty of recuperation power is a consequence of having decent acceleration. It's got about 200bhp in the motor, making it feel lively and getting it to 60mph in somewhere less than eight seconds, with nice punch out of bends because as with any EV there's no need for downshifting.

The low-slung body is lithe in bends. We have quick, accurate steering and little body roll, achieved without a rock-hard set of springs. The body structure feels solid, so it doesn't suck precision out of the steering.

Use power out of a corner and it scoots away nicely, and there's unbroken traction on this dry day. Rear-drive means no understeer. In fact the test driver says if it's wet, he enjoys using the rear-wheel-only regenerative braking to make the back end step outward on the way into bends. In a priceless one-off prototype. Good for him.

I did two circuits of a mixed course, mostly slightly hilly and medium-speed. Sort of like the Cotswolds except I wasn't held up by tourist buses. First time I just drove like a normal human being, and got better than 6 miles/kWh. That's twice as economical as I'd expect to get in any other electric car in those conditions.

Then I got competitive. Wasn't actually much slower, but remembering my way around the course I knew where I could safely use a bit more speed into a bend while accelerating more gently out of it, and where I could best use momentum through hills and valleys. That gave me a pretty staggering 7.6m/kWh. Enough for the said 750 miles of range.

So why is it so thrifty?

It starts with the electrical system. The battery holds the same energy as the one in a production EQS limo. But it's half the size and a third lighter. Part of that shrinking comes from the fact it's air-cooled. Most new electric cars use water-cooling for the batteries, but this one manages to do the job without, saving weight and complexity and aero drag through a radiator.

Its high-voltage electronics, and those that control the motor, are obsessively designed for minimal loss too. Same with the motor itself, a permanent-magnet unit. Remember, losses mean heat generation. All this focus on efficiency had an effect the engineers hadn't expected: instead of having to do a lot of cooling, they ended up wrapping the motor and inverter in a thermal blanket to keep it warm. They do have a cooling system, but it's mostly blanked off, saving pump and drag energy.

I drove a test mule with that drivetrain. The engineers call it EMMA, and it's an EQB production car that's had the guts stripped out and replaced by the EQXX battery, high-voltage electronics, motor and transmission. I got 3.8m/kWh out of that, whereas I'd expect around 3.2m/kWh from an EQB. So that shows the new drivetrain gives about 20 per cent energy saving.

But it's the tiny drag that really makes the EQXX roll along with so little energy. The headline feature is that teardrop tail, with a sharp break to minimise turbulence. And beyond urban speed, a double-deck diffuser pops out and down below the tail, taking the Cd from 0.18 to 0.17.

Everything, including the powertrain, is optimised for motorway speed, so unlike most EVs the economy (and range) don't collapse when you get to 65mph.

Finally the roof, and what would be the back window, are covered in solar panels. In one sunny day they can add about 15 miles of range.

There's some clever stuff here too. To make thin, light castings for the structure and suspension, they used bio-mimicry. In other words, computationally-intensive calculations that shave away material from wherever it's not needed. The end result is literally skeletal – it looks like bones.

You might scream at this point that the BMW i3, with most of its body and chassis made from carbon fibre, is 400kg lighter than the EQXX. And is just as roomy. (The EQXX's rear space is pinched by the narrow low roofline.) But the i3 has a battery of little more than a third of the EQXX's capacity, and far more frontal area. It goes only a fifth as far on a charge.

So where are they going with this?

Many of the innovations in platform, structure and powertrain will show up in Mercedes’ next generation of compact-to-medium EVs. That's what Mercedes calls the MMA platform, due from 2024 onwards. But I can't tell you exactly which, because such is the pace of EV innovation in the industry that they don't want to finalise the platform until the very last minute.

Whether they build a car that looks like the EQXX is also not decided. It would have compromises on space and practicality compared with a taller hatchback or the crossovers everyone wants to buy. It would have to be expensive.

And Mercedes knows well that even among premium cars, improving economy through clever engineering doesn't mean big sales if the car ends up slightly oddball. As the Audi A2 and BMW i3 proved.