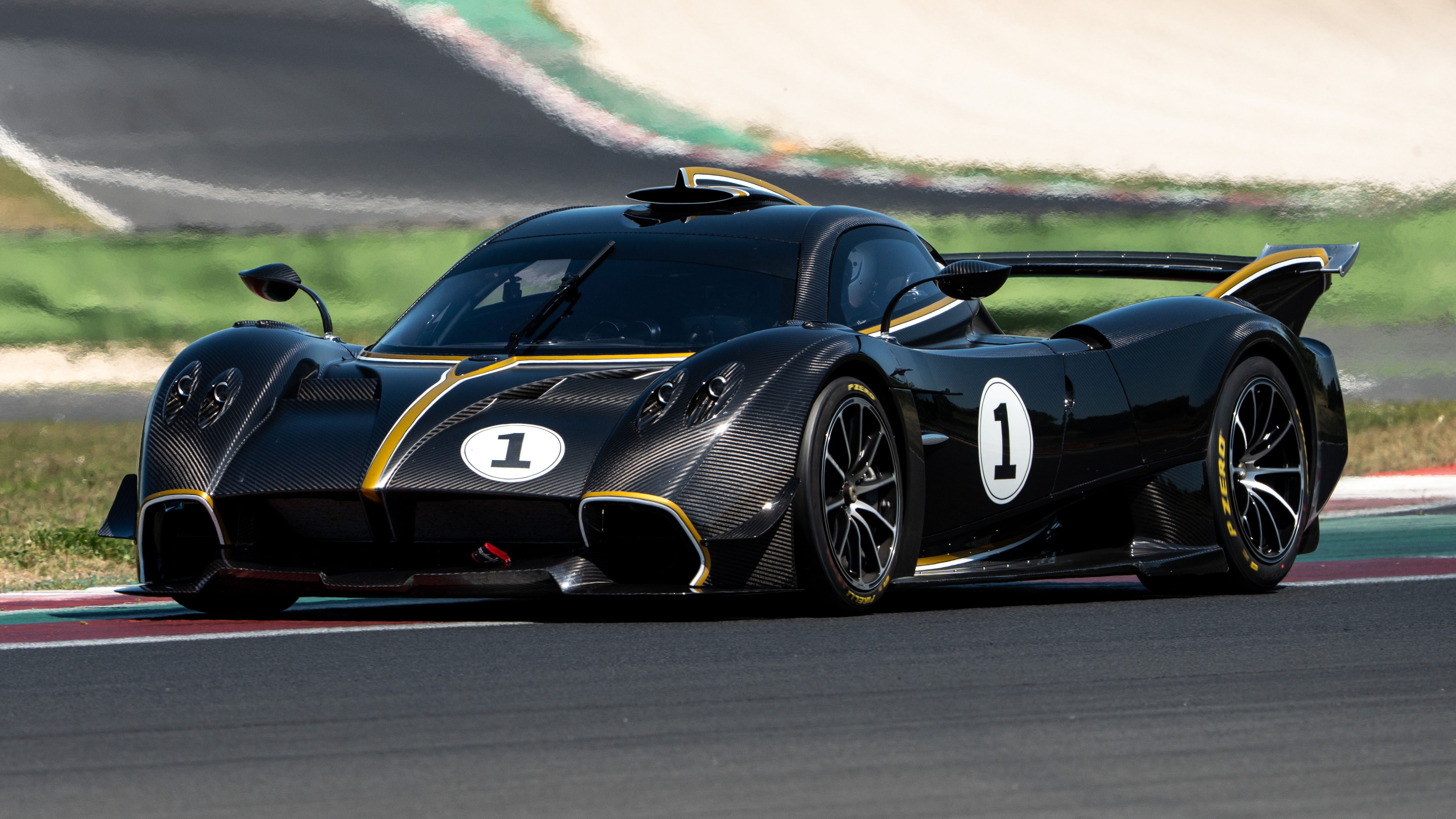 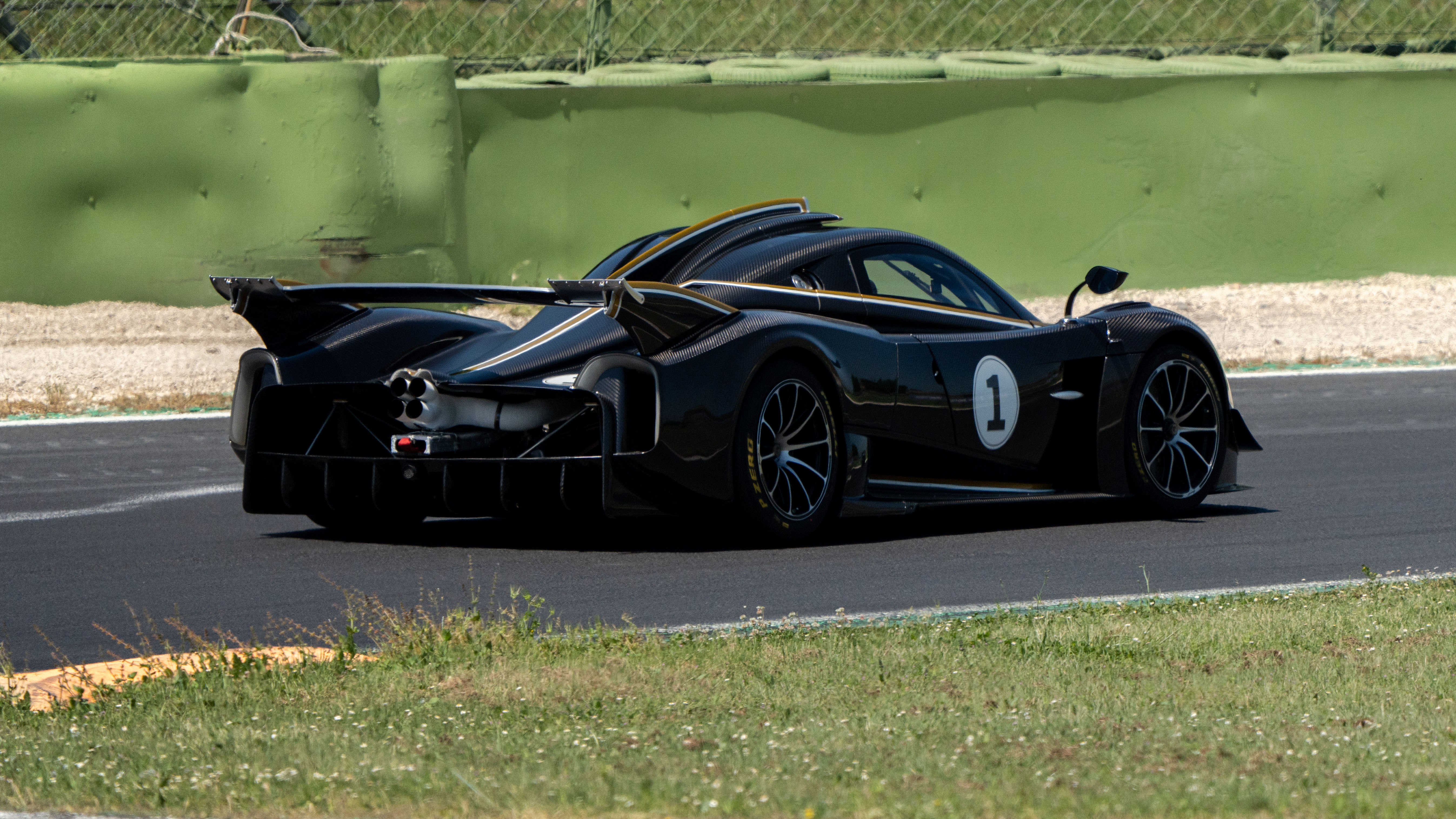 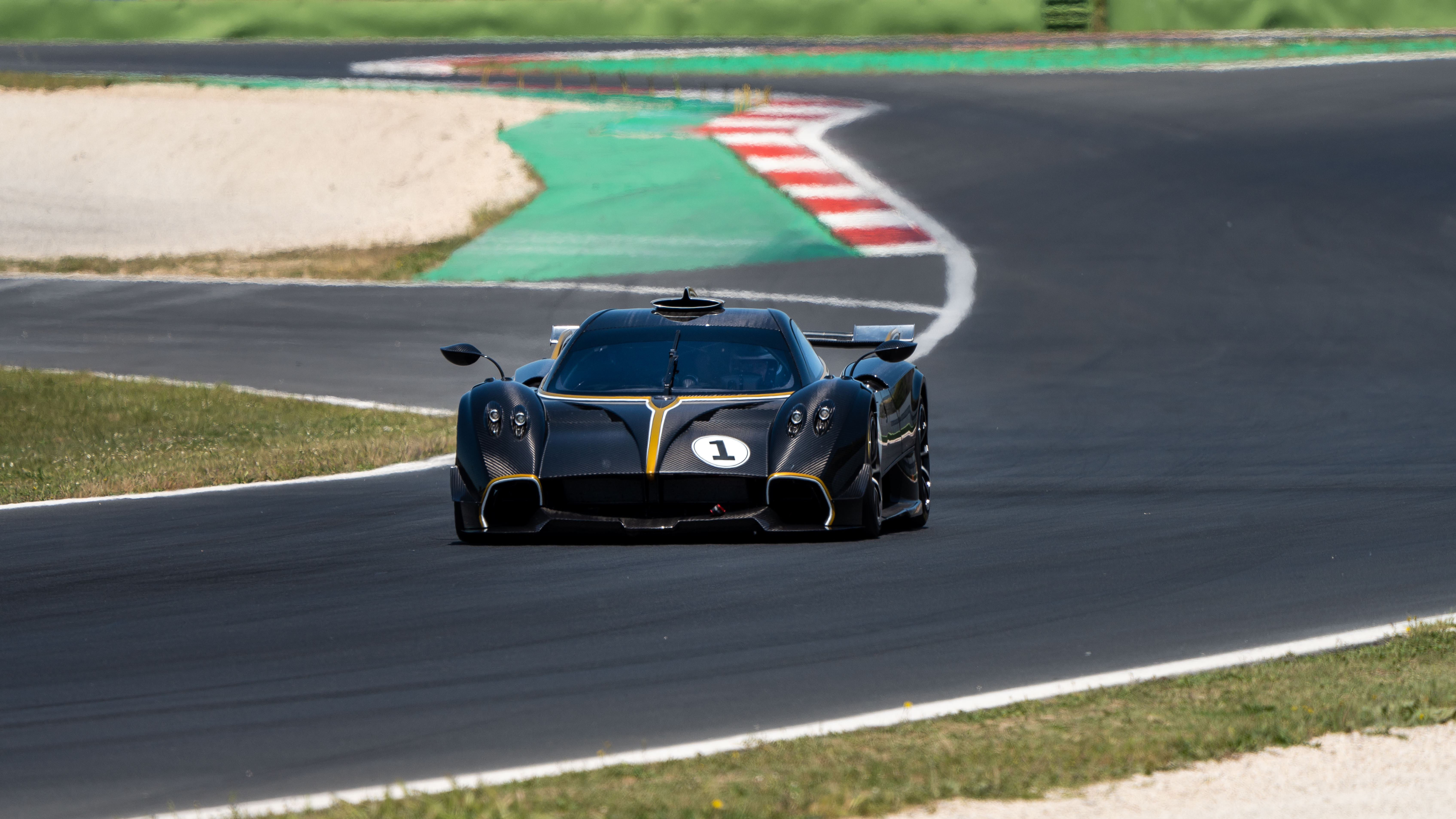 Huayra R? Let me guess, another addition to the track-only hypercar class?

What has Pagani managed to wring out of the twin-turbo V12 this time round?

A-ha, your first mistake. The Huayra’s twin-turbo V12, although mighty, was never as exciting and charismatic as the Zonda’s naturally aspirated engine, but since this car doesn’t have to subscribe to road regulations, the turbos have gone. As has the whole engine in fact.

That’s right, Pagani has started again from the ground up, creating an engine with HWA (AMG’s motorsport partner) that will only ever go in these 30 cars. It’s safe to say that this project is Pagani’s bid to re-establish its reputation for internal combustion sound and drama. So, a 6.0-litre V12 revving to 9,000rpm, developing 850bhp and if you crouch down next to the car, the top of the engine cam covers sits below the top of the tyre. Yes, it’s that low in the chassis.

The V12 weighs only 198kg, and together with the 80kg gearbox and differential behind it, is a full structural member, hard bolted to the back of the carbon monocoque.

Of course, it uses the Huayra’s carbon tub.

And there’s your second mistake. Pagani freely admits this project got a bit out of hand. The original aim was to use the road car’s carbo-titanium tub, but then they decided that although it’s not a race car, it should follow the FIA’s safety strategy, so the three-part monocoque has higher sides, incorporates a full rollover cage (subjected to a seven tonne crush force), has a carbon deformable crash structure at the rear that can cope with a 56kmh rear impact from a 1,350kg car and dissipate all that energy before it reaches the gearbox…

To give you some numbers, torsional rigidity is up 16 per cent over the regular Huayra and flexing rigidity has increased by 51 per cent. Pagani has used 40 different types of carbon in the construction.

The long and the short of it is that the only parts carried over from the road car are the wing mirrors. Yes, really. Even the door latches had to be redesigned. Saying it’s a Huayra at all is stretching the truth. From root to tip it’s pretty wild.

It’s downright spectacular to look at – those curved struts that hold the rear wing give it a real long-tail vibe, there’s active aero panels on the rear deck, little flicks at the edge of the wing that are a nod to the original Porsche 917, and the whole thing just comes across as wonderfully exotic.

To my eyes it looks even better with the clamshells removed. There’s so much to pour over – the inboard suspension, the anodised brown forged aluminium wishbones, and most of all the shocking white of the exhaust. Made of Inconel, but the white is a ceramic coating that prevents heat escaping into the engine bay. You can have your exhaust with or without mufflers.

And just how noisy is it?

Well now, as I mentioned earlier Pagani cares about how its cars sound. So if you have the mufflers it peaks at 110db, but if you do without them you’ve got a 140db noise weapon. That’s right, 140db. Louder than an F1 car and about ten times more intense. I’m convinced half the pleasure for owners will be standing on the pitwall and listening to other owners scream past. Because that’s what the sound is: a high pitched scream that goes straight past your aural defences. It’s outrageous. And addictive. Every time the car went out at Vallelunga, I headed over to the pitwall to get the full sonic bombardment yet again.

It's not just the full bore sound that’s so enthralling. At start up it explodes into life after a starter motor whine with a force and instantaneousness that makes everyone inadvertently jump, no matter how many times they’ve heard it. The switch off is just as interesting in its own way. The noise just stops. One heartbeat wailing noise, the next dead silence. Apart from the ringing in your ears. Ferrari is the only other company that makes a V12 this compelling and I’m not sure they’ve ever had the guts to uncork one so completely.

And out on circuit?

We were at Vallelunga and I was nervous. Turn Two is proper scary, an easy sweep left through One leading to a downhill braking zone into a very fast right. My only other visit here was in a Lamborghini Aventador SVJ, and it gave me sweaty palms through that corner.

The Huayra R made mincemeat of Turn Two. And every other corner on the circuit. I thought that 850bhp acting on 1,050kg (probably nearer 1,200kg with fluids and me on board) would mean the engine dominated and the rest of the chassis would be on catch up.

Not a bit of it. It flowed around the circuit in this creamily smooth way. You could pour it into corners on the sensational Brembo CCM-R brakes, slingshot around them, then surge away on this gloriously predictable, perfectly delivered wave of naturally-aspirated power. Turbocharged cars don’t have that predictability, let alone the response, even more let alone the sound.

Inside full noise penetration is dulled, but in its place comes this deep vibration and sense of connection. You’re nestled deep in the belly of the beast, the windows are high, the seat is a moulded part of the monocoque (you slide the pedals and steering to fit) so you’ve basically strapped the V12 to your back.

How was the chassis balance?

The Huayra R is hugely adjustable of course – owners will be able to sit down with an engineer and play with a plethora of settings. You could have a play and make it snappier and more aggressive, but the car I drove was just wonderfully friendly and benign. It was reassuring despite the unholy speed, fearsome acceleration, manic grip and vast forces involved. It seemed to put an arm round my shoulders and guide me effortlessly around. The R responded exactly as I wanted to every input I gave it. That harmony bred confidence, and soon after that, slight frustration.

Leading me round was a Huayra BC. The R made mincemeat of it. Everywhere. It would rip up behind it on straights, take chunks from it under brakes, give me line choices through corners where I could see the BC pushing wide. Different beast altogether.

I’d drop back on the straights to be able to nail the brakes harder, deliberately wait while he gusted out of corners, toy with him basically. It was just really good fun driving a car that made speed so intoxicatingly easy to access and rewarded me so richly.

Because that’s the key to this car. Not that the brakes are the strongest, or the cornering grip the mightiest, but that the experience is so exciting, compelling, enthralling. Emotion bred out of engineering. We often only think of Pagani’s relentless quest for perfection in terms of the exquisite jewel-like design, but here’s proof it extends to motorsport. The way the diff locks up as you come out of corners, the ever so subtle way the traction control nibbles, the fact you can feel all this happening, enjoy these different sensations.

Personally I’d like more direct steering and greater turn-in bite to fight back against the steering feel-sapping effects of 275-width front slicks (the rears are 325), but otherwise? Hard to fault. Especially once you’re out of the corner, and have put yourself in the hands of the screaming V12, whipcrack gearbox and endless hurl of acceleration. Knowing you’re leaving a pulsating, quaking wake behind you is pretty good too.

It's just so exotic to drive. If I was in the market for a genuinely exciting track-only hypercar, I wouldn't look anywhere else. They all have their strengths: the Brabham BT-62 is mechanical and hard-edged, the McLaren 720S GT3X has genuine motorsport pedigree, Aston Martin’s Vulcan is tempestuous, the Porsche 935 is accessible yet massively engaging – and that’s before we get to Ferrari’s XX cars. I haven’t driven one, so can’t comment directly, but they’re the ones Pagani cites as the benchmark for this.

Prancing Horse aside, the sheer excitement and drama and wonder of smashing around in this thing beats them all. You can get jaded by these track-only specials, they look like a developmental dead-end, but this glorious machine unstitched my scepticism completely.