£763 p/m
External link to
with Leasing.com
Read why you can trust our independent reviews
Top Gear Team
Published: 10 Mar 2022
Skip 21 photos in the image carousel and continue reading

1 / 21
Advertisement
“Jaguar stepped bravely into the unknown and nailed it. A rapid, desirable, good-looking car that happens to be powered by electricity ”

Fluid to drive, calm and refined, elegant yet bold styling, useful space inside

The boldest of bold moves from Jaguar: an all-electric SUV, the first credible rival to Tesla’s premium EV dominance, a car that beat its German rivals to market and a radical piece of design. The I-Pace signalled the start of something big when it first launched in 2018 – that mainstream manufacturers, not just Silicon Valley start-ups and BMW, were prepared to invest properly in building new-from-the-ground-up electric cars you might actually want to own, and might be able to afford.

How far will it go on a tank of electrons?

After incremental updates over the years, headline facts are currently thus: the I-Pace uses two concentric electric motors, one on each axle for permanent four-wheel drive, producing 395bhp and 513lb ft of torque, delivered through a single-speed gearbox. The lithium-ion battery, placed under the floor – de rigueur these days – is sized at 90kWh (85kWh of which is usable), good for a claimed 292-mile range on the WLTP cycle. Give it the berries and 0–60mph in 4.5 seconds and a 124mph top speed is rapid by any measure.

Blimey. What about charging?

The I-Pace will charge at about 22 miles per hour from a 7kW home wallbox. But that doesn’t matter particularly – you’ll just plug it in overnight and leave it to it. What does matter is charging speed away from home and the I-Pace is starting to get left behind. It can charge at a maximum of 100kW on a DC charger, meaning a 5-80 per cent charge takes around 45 mins. The Porsche Taycan, Tesla Model S and others can charge in less than half that time.

More time for service station coffee, then. The joy. And watch the range. As with any other car, the WLTP range only applies in perfect conditions. Drive any electric car in sub-zero winter conditions and you’re unlikely to do better than two-thirds of the claim. So expect 200 miles in winter, maybe 230-240 in summer.

It's certainly a looker...

It does look good, doesn’t it? Those 20-inch wheels – standard on the SE and HSE models and often blacked out to merge with the rubber – are probably the Instagram/ride quality sweet spot… there are also 19s available if you want to look silly, or 22s if you must. But it’s the proportions that steal the show: the stubbed nose that brings the front wheels forward with it and the high, squared-off rear end set the template, while the rear spoiler, vented bonnet and flush doorhandles provide the detail. Its beauty doesn’t slap you like a botoxed Alfa, it’s a slower burn than that, but eventually its bravery hooks you in.

And the styling and brand help convince you it’s worth the money when other cars a similar size (the Mustang Mach-e and Kia EV6 spring to mind) cost around £20,000 less. The I-Pace starts at £65,565, positioning it with the Audi e-tron and Mercedes EQC.

This is the key to the I-Pace’s appeal. All electric cars tend to be smooth and silent, but few are genuinely engaging and rewarding to drive. This one is. It steers precisely, rides beautifully, is quick over the ground and makes light work of everything it turns its hand to. It makes travel pleasurable when electric cars can often feel heavy and dull with twirly steering and a disconnected chassis.

Read a long-term review on the Jaguar I-Pace by clicking on these blue words.

“Jaguar stepped bravely into the unknown and nailed it. A rapid, desirable, good-looking car that happens to be powered by electricity”

Let’s start with the caveats, shall we. The I-Pace isn’t cheap, it’s not an EV for the masses. It remains a premium vehicle that’s priced accordingly. We also can’t deny that there are still issues around the car’s range, despite the fact real-world 200-mile ability will comfortably cover the needs of the vast majority of buyers. And since it’s now been on sale for four years it’s a pity Jaguar hasn’t yet expanded the car’s model range, maybe with an entry-level single motor or high performance version.

Despite that, what won’t put people off is the way the I-Pace drives: acceleration is strong, handling is surprisingly tight, it’s an electric car that you’ll actually want to own and enjoy driving. It’s also comfortable, quiet, spacious, well-built… all the things that, if we’re honest, matter day-to-day. The I-Pace won’t be for everyone, but hats off to Jaguar for making a car that steps boldly into the unknown, and still shows those pesky Germans the way. 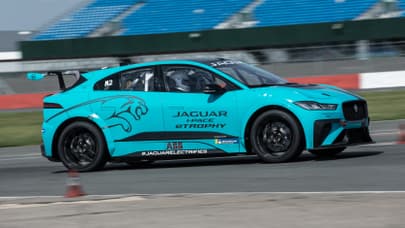