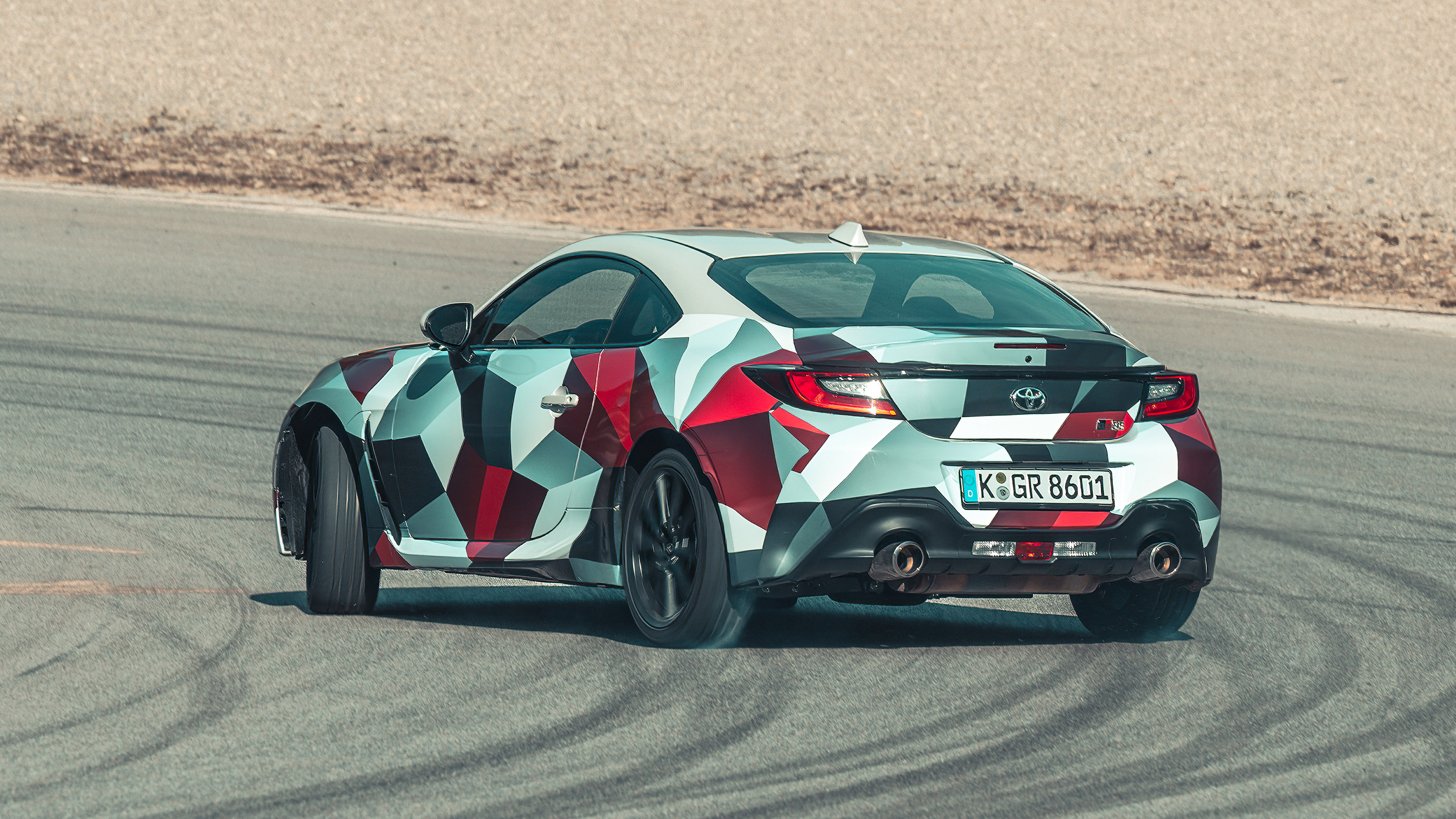 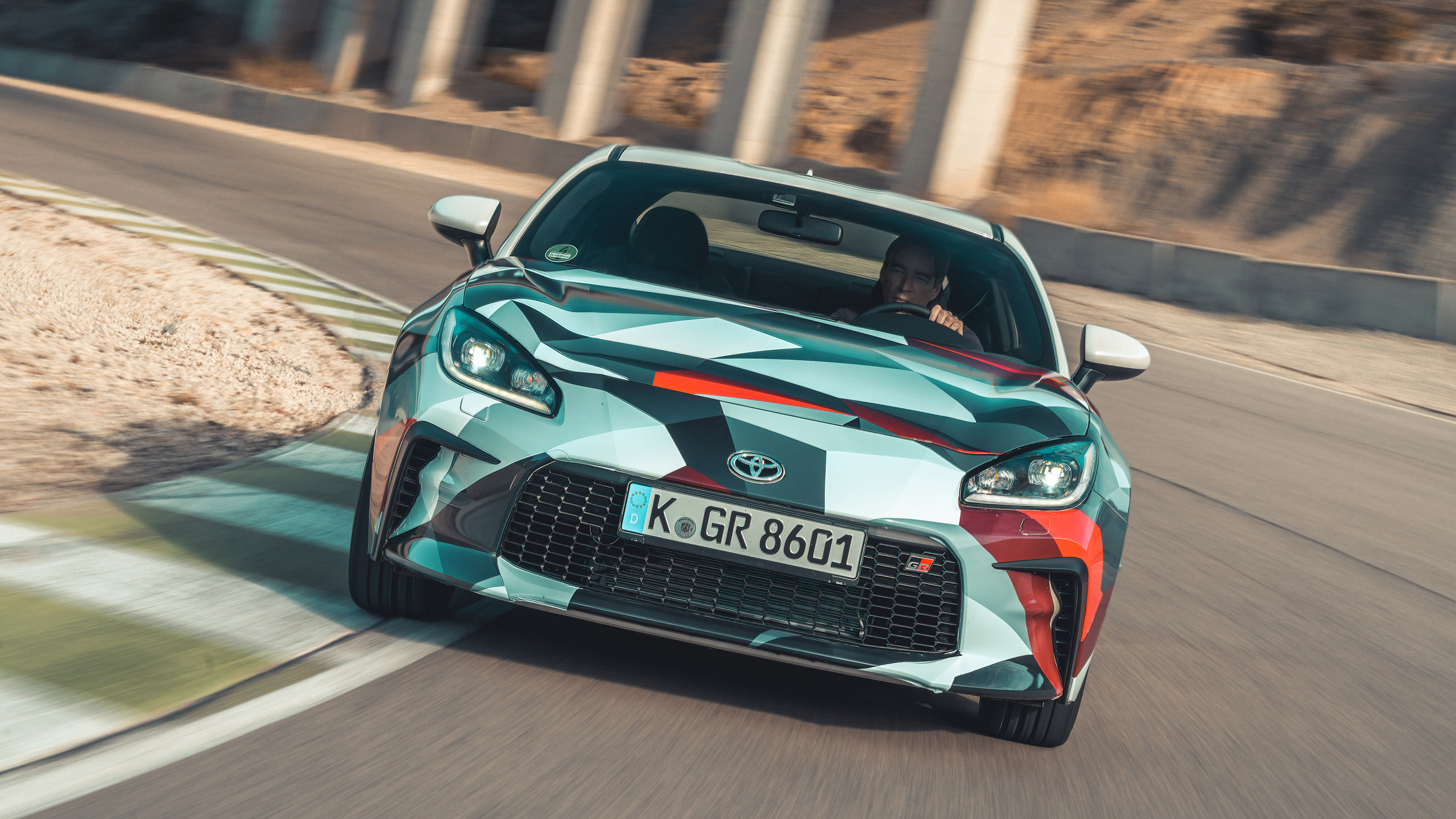 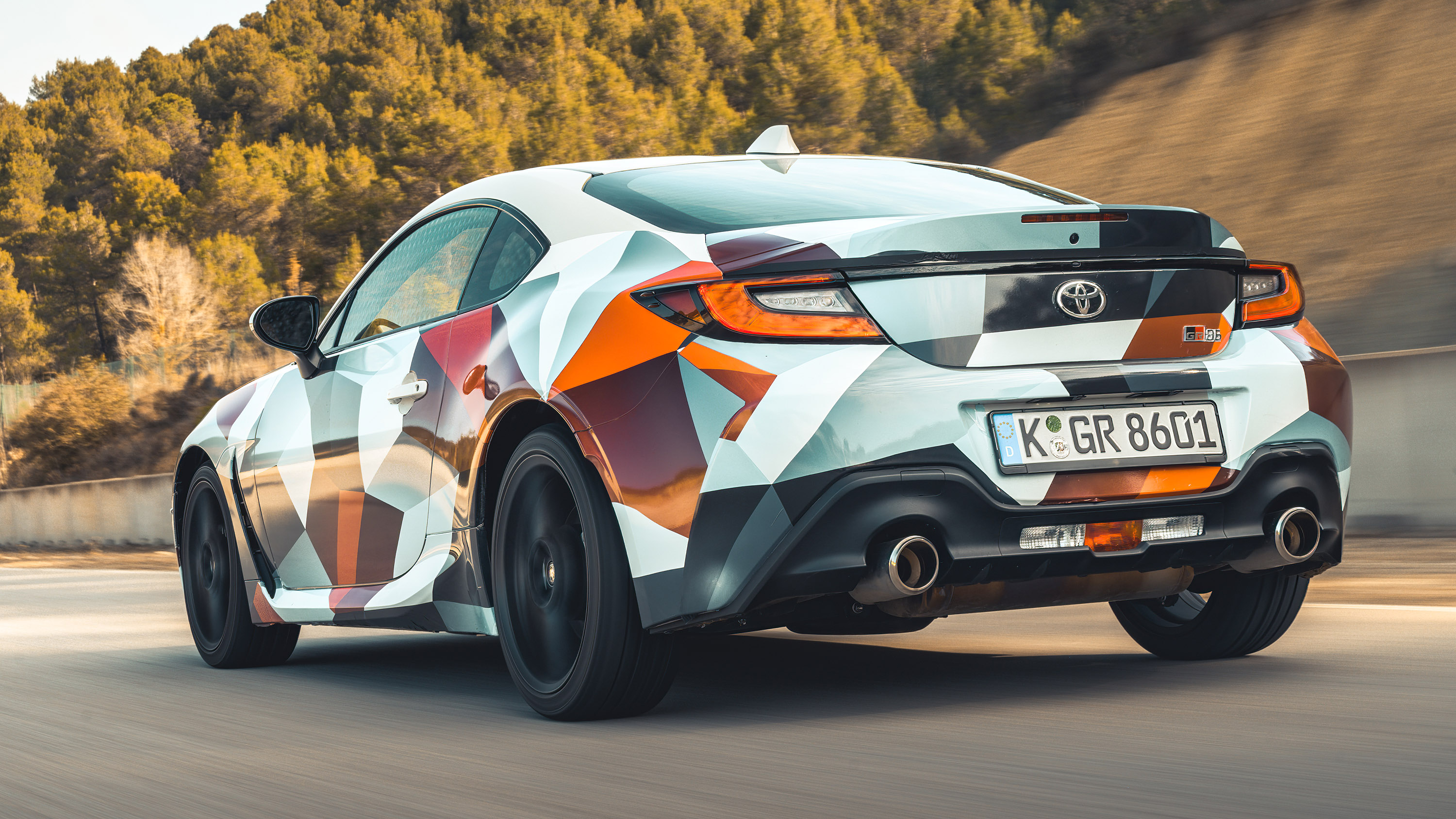 Well this looks fun to drive…

‘Waku-Doki’, we think you mean. Not a new In The Night Garden character about to muscle in on the Tombliboos’ turf, rather the Japanese philosophy of ‘heart-pumping excitement’. We’re promised the Toyota GR86 is chock-a-block with it.

Why is it wearing Elmer the Elephant’s army fatigues?

This is still technically a prototype, with European cars getting their full debut at some point in December. But we already know in great detail what the global car looks like and what’s going on beneath, and it’s difficult to imagine the car headed for British shores being much different. And other than the fetching patchwork wrap, there’s not a single thing about this test car that felt unready for showrooms. By the end of my day with it, I kinda hoped the colour scheme makes the options list, too.

Remind me of the fundamentals, please.

You’re looking at the sequel to the Toyota GT86, a back-to-basics sports car developed with the Subaru BRZ and which has lived for 11 years without gaining a single extra horsepower in factory form. While the BRZ has hit gen2 with the same name as before, the subtle switch from GT to GR is actually anything but – it represents a change in mindset. Where the first iteration of Toyobaru coupe was largely all pieced together by Subaru – with a few dynamic flourishes applied to the GT86 by Toyota in the final stages – the two development teams split much earlier this time around, allowing Gazoo Racing ID to bubble close to the surface.

Power still comes without the assistance of a single turbocharger, though it’s finally climbed north of 200bhp. The old 2.0-litre flat-four engine has swelled to 2.4 litres, with the cylinders bored out for extra capacity so it’s no bigger or heavier.

It is, in the words of people wearing actual Toyota fleeces in the pitlane of our Castelloli test session, ‘the engine this car always deserved’. Naturally the chassis has enjoyed plenty of attention, too. The GR86’s structure is stiffer – torsional rigidity climbs 50 per cent over the GT86’s – while the car sits 10mm lower, the driver’s hip point dropped 5mm. If you needed proof this little sports car is the anti-crossover, it’s right there.

The roof and front wings are aluminium, cutting enough weight for Toyota to add requisite new safety systems. At 1,275 kilos this is still delightfully featherweight, just 5 kilos up on its forebear.

Why would I buy this over a GR Yaris?

It’ll cost less money, for starters. There’s no UK pricing yet, but you’re looking at what Toyota describes as ‘the accessible entry ticket to GR’, so £30,000 seems a likely ballpark.

It’s purer than the hot hatch, too. Rear- rather than all-wheel drive, with your only driving mode selection being how tightly you want the stability control to grip you. Otherwise it’s a simple case of nestling into the hugging fabric seat, eagerly pressing the starter button, then getting merrily about your business.

Tell me of said business.

To start with it feels a heck of a lot like a GT86 with a detailed facelift. This is such a heroically driver-focused car that Toyota’s not had sleepless nights about the perceived quality stuff beloved by its rivals. You pop your bag in the boot then pull the lid down without the help of a grab handle, a hollow clatter as it shuts.

Clamber inside and while there’s a fresher, CarPlay-infused touchscreen in the middle and digital dials ahead of you, the steering wheel and gear knob are carried over from the GT to give the GR the same general ambience. Toyota may win new customers with this – those unwilling to wait a year (or more) for a Yaris, who can secure a RWD sports car sooner and cheaper – but it’s clearly prioritised keeping existing customers in their safe space.

Surely all that power makes it different to drive?

You hear the same boxer blare as you start the engine and pull slowly away, and if you potter around below 3,000rpm, the experience really isn’t a big leap on. But as soon as you cross the threshold from urban to rural roads, opening up the potential to regularly soar past 7,000rpm, things change. So much for the better.

It’s morphed from a reasonably fast car to a genuinely quick car. And one that makes the trend for turbocharging small performance cars look like the lazy option; develop a nat-asp engine this thoroughly and it’ll provide all the mid-range torque you need while building its revs with delicious linearity.

It’s still not a sexy power source destined for a hall of fame – not least because Toyota’s piped in augmented sound which totally jars with the luddite-appeasing mentality – but it fits the car an absolute treat. And the dealer will turn the fake noise off if you ask nicely. If the GT86 had launched with this kind of punch, perhaps we’d see them everywhere. 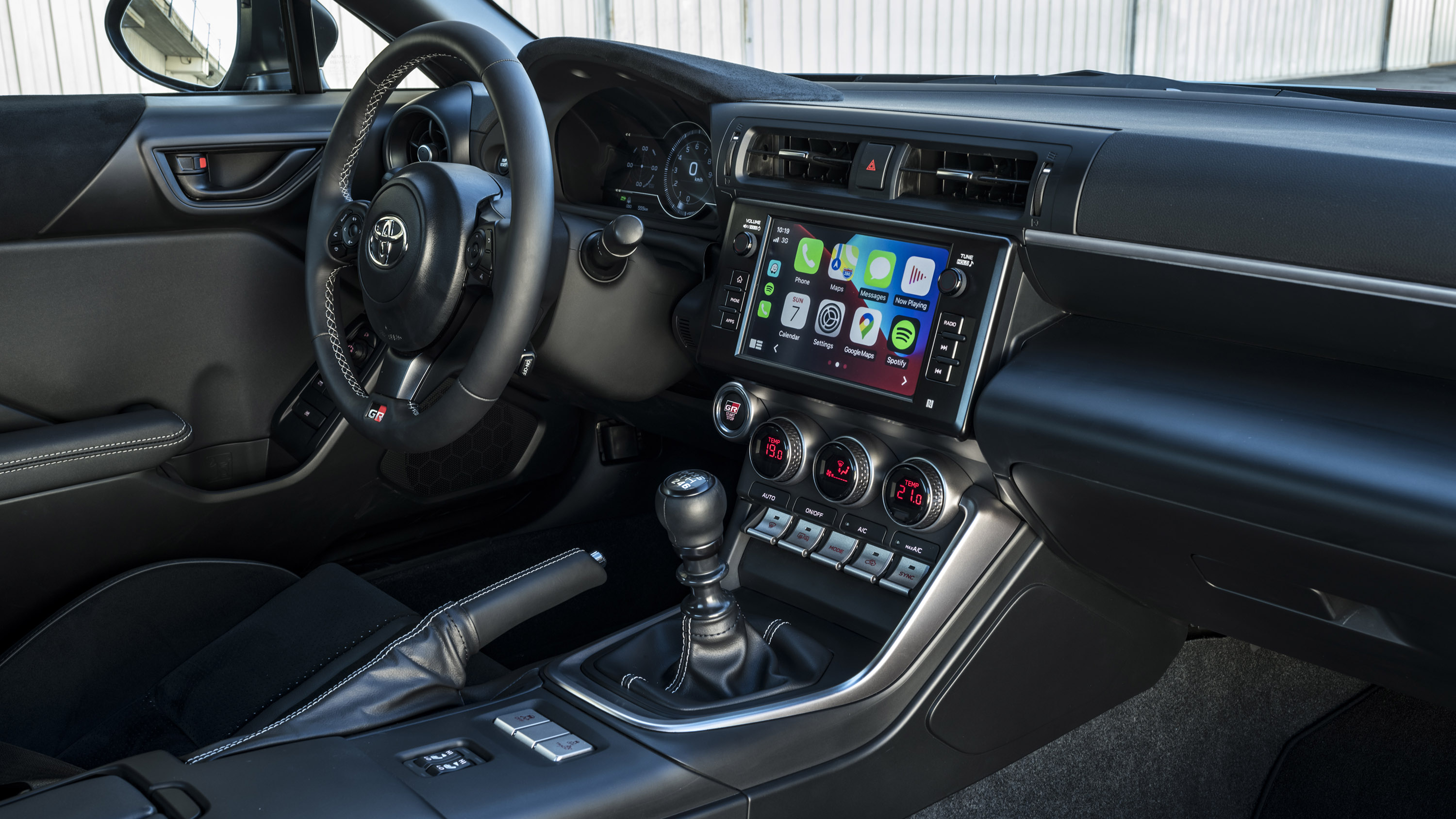 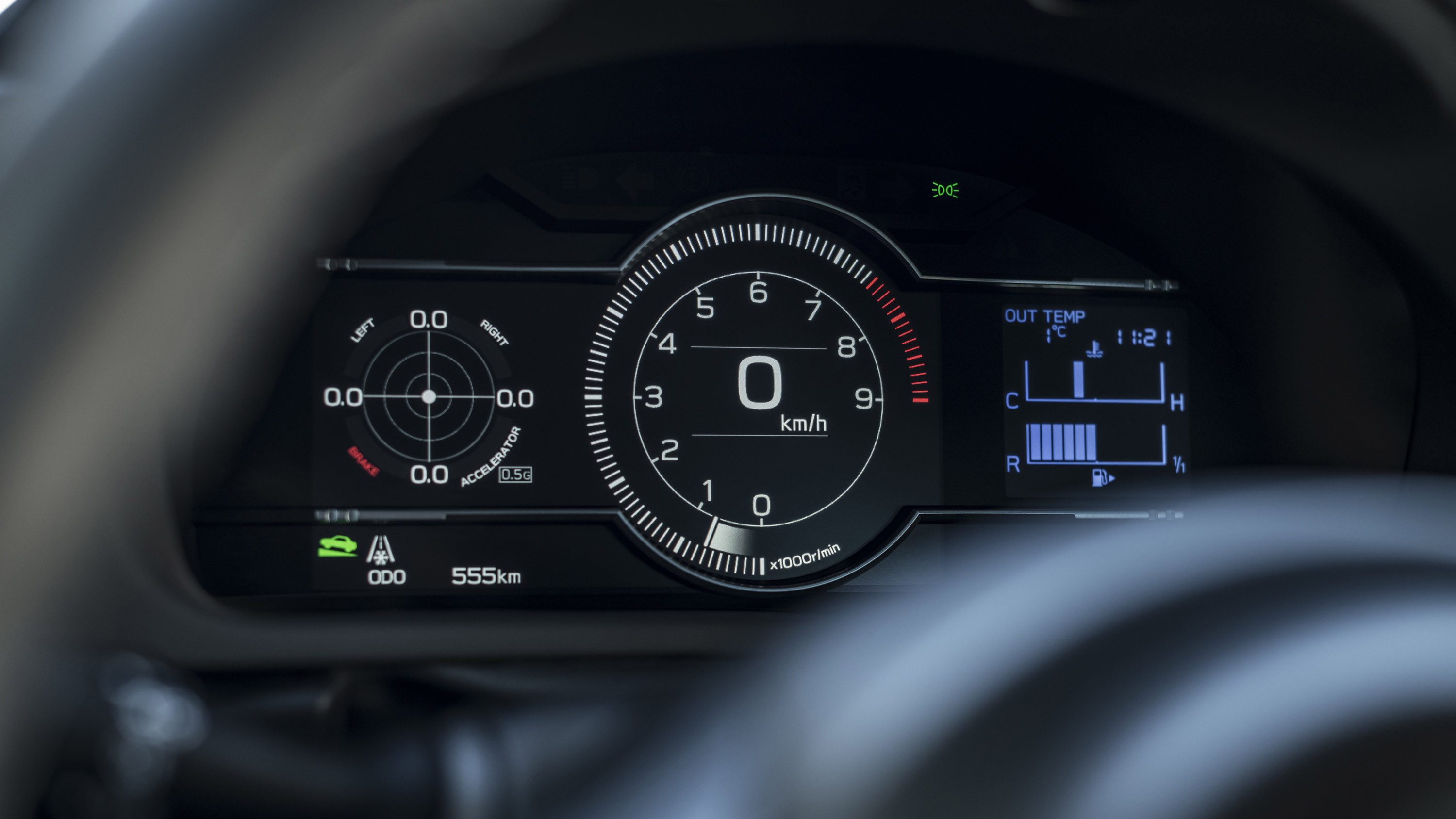 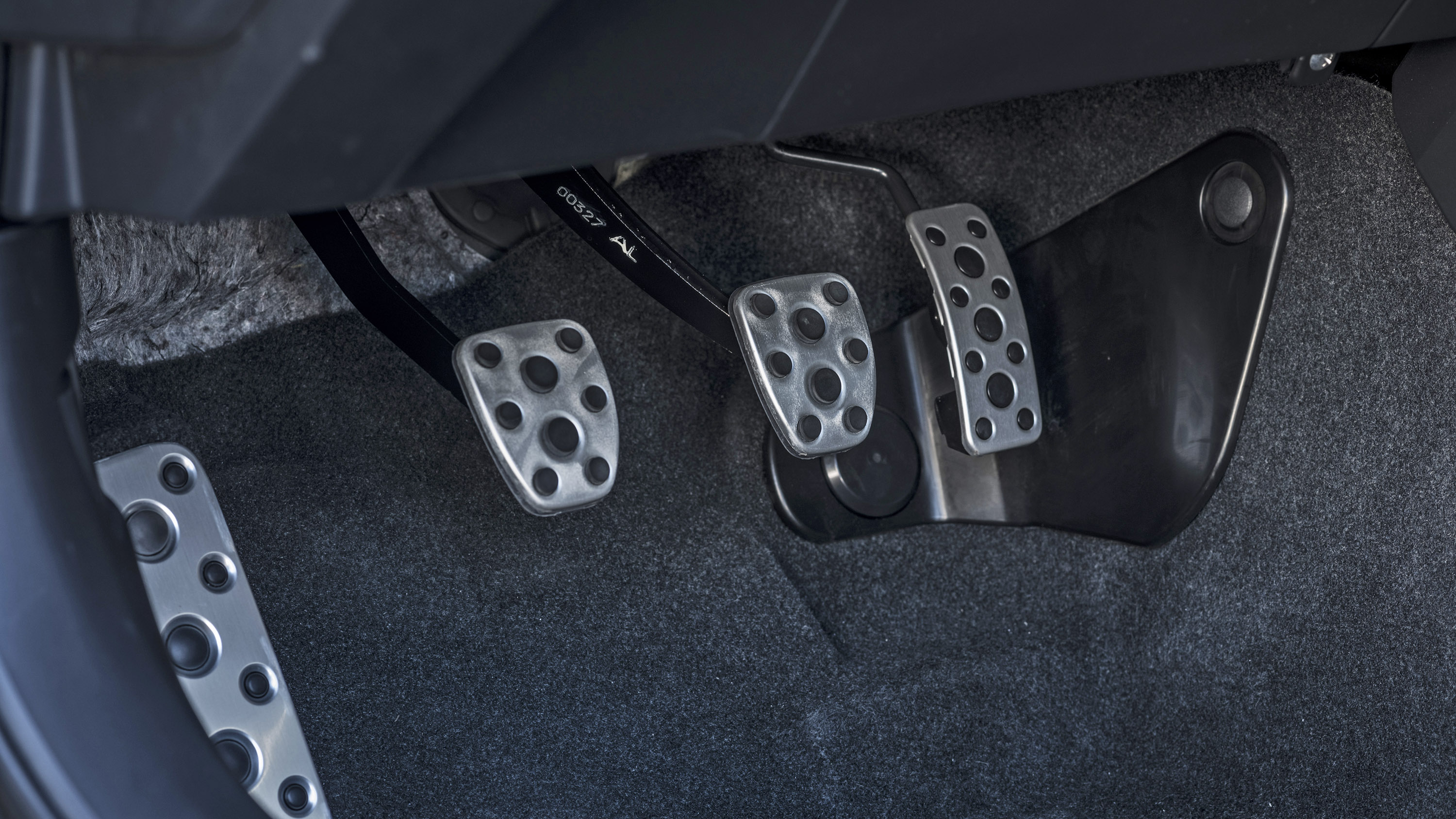 Describe it in a nutshell.

You can leave the GR86 in third gear for the entirety of your favourite road, neither bogging down out of tight corners nor screaming along with the pistons bursting out of the bonnet on the straights. It still loves to rev, and changing down to second brings its own rewards if you’re the sort who enjoys Best Motoring pedal cams, but it’s no longer vital to do so simply to keep a moderately well driven Meriva at bay.

The suspension is basically the same as a GT86’s, just tuned for that extra dollop of torque. So while the power delivery has transformed, the car’s beautifully linear cornering responses haven’t. It’s tangibly a touch stiffer and more alert than before but this is no hyper-aggressive track refugee. On smooth Spanish roads we got a lovely flow going almost immediately, the ride beautifully judged.

You just know the hardware’s been pored over with worrying levels of obsession to get this right. You hop in and the car politely follows your requests with zero filter, no clanging quirks or gaps in the powerband to adjust your behaviour around. Instead, it’s all about upping your own precision and smoothness to match the car’s.

So it won’t flatter me?

Not like newer-fangled sports cars do. You don’t need to heel ‘n’ toe in here, but the car definitely prefers it, especially if you push it harder on circuit. Change down to second gear while braking hard into a bend without rev-matching and you might just get a chirrup from the rear wheels as they briefly lock, a feeling you get from few cars – if any – outside of a Caterham Seven. The GR86 wants you to up your game. You’ll willingly oblige.

The whole thing feels unburstably engineered and invites a real flogging on track, its scant weight ensuring the brakes take a long time to even think about going soft. And yes, it’ll drift. Even more keenly than before with such potent torque low down its rev range. The GT86 needed really throwing into a corner to unstick its back axle, at least in the dry. The GR86 will start to move under mild load and power, but never catches you unawares.

Which brings us, somewhat nerdily, to tyres. Toyota plans to offer the GR86 in two trims: a base car wearing 17in alloys in Michelin Primacy rubber – the eco-tastic base tyres infamously tucked beneath its predecessor – and a top-spec car with 18s in Michelin Pilot Sport 4s and with a fetching ducktail spoiler perched out back.

Which do I want?

Ducktail and 18s is the only way we’ve driven it, and with such wonderful progression on display, it’s hard to imagine those Primacys feeling anything other than a step down, maybe even outright overwhelmed by the 86's newfound muscularity. Toyota says the base tyre was well-received first time around, so it’s not messing with the formula, keeping its core customers happy. Perhaps we’ll be pleasantly surprised when (or if) we get to try the base car.

Do you know how the BRZ compares?

In the UK – and indeed Europe – it’s a moot point, because we no longer get the choice. Only the GR86 will make it here. But Toyota is so confident at how divergent the cars’ characters now are, it’s been offering its Japanese customers back-to-back drives between the ’86 and gen2 BRZ at Fuji Speedway. Reports suggest the Subaru is more focused more on grip and lap-times than flamboyant rear-drive japery.

So if it’s Waku-Doki you want, the Toyota is the place to find it. And if the GR Yaris waiting list is getting you down, Gazoo’s cheaper alternative has the potential to put an even bigger smile on your face. We can't wait to try the finished product.