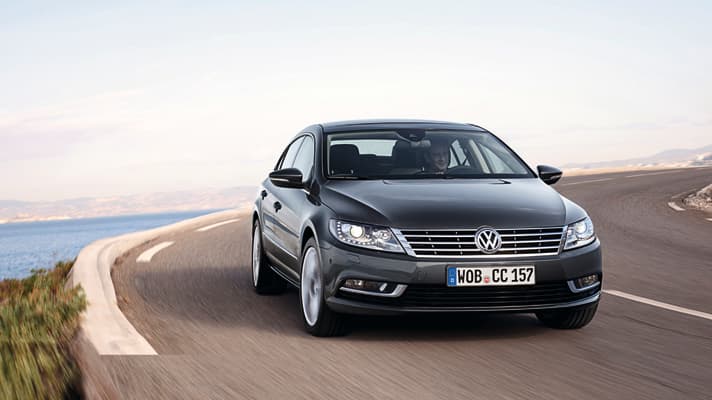 The standard three-box, posh, company-car game turns up some epically good metal - look at the new 3-Series for crushing competence. But what if it's too boxy or too everywhere? Step forward, the Volkswagen CC.

We always liked the VW Passat CC, but now it's just a CC, having dropped the Passat name - if not the Passat kinship. It's just a facelift, grafting on the new VW corporate nose and new tail lamps. The only sheet-metal change is a smoother bonnet. Underneath, there's extra soundproofing and more active-safety options but nothing else.

So it still drives well, but not sparkingly when the tarmac is very snaky, and, on open roads, it offers plenty of feel, going where you guide it with minimum fuss. It all seems tightly hewn together, tautly damped and still manages a decently pliant ride. I was in the optional adaptive-dampered version, but you don't need them - the suspension isn't actually altered from the old car, which was OK on standard dampers.

Engines run to the predictable VW quartet of 2.0TDI in 140 and 170 outputs, and turbo petrols in 1.8-litre 160 and 2.0-litre 210. The V6 version has been killed in Britain and won't be missed. Unless you're forever loading up, the 1.8 petrol is plenty. It's sweetly happy to spin to big revs. The petrols are by some margin the lighter blocks, and so the whole car feels more lithe than the diesels.

Not that the diesels - which everyone will have, because these are company cars - are any chore. We know from a million other VW models how well they go, but factor in the CC's extra soundproofing, and they are decently relaxing on those inevitable inter-conference motorway hauls.
The real appeal is the design and the cabin. Deep, buckety seats feel like they come from a much grander GT, and the beautifully made furniture sweeps around you more snugly than in a saloon.

The roof and pillars are more intimate too, reinforcing the coupe sensations. There's plenty of kit: satnav, DAB, climate and xenons, even on the base spec. Even if it's just a Passat in a fancy dress, it does manage to carry off a party feel...