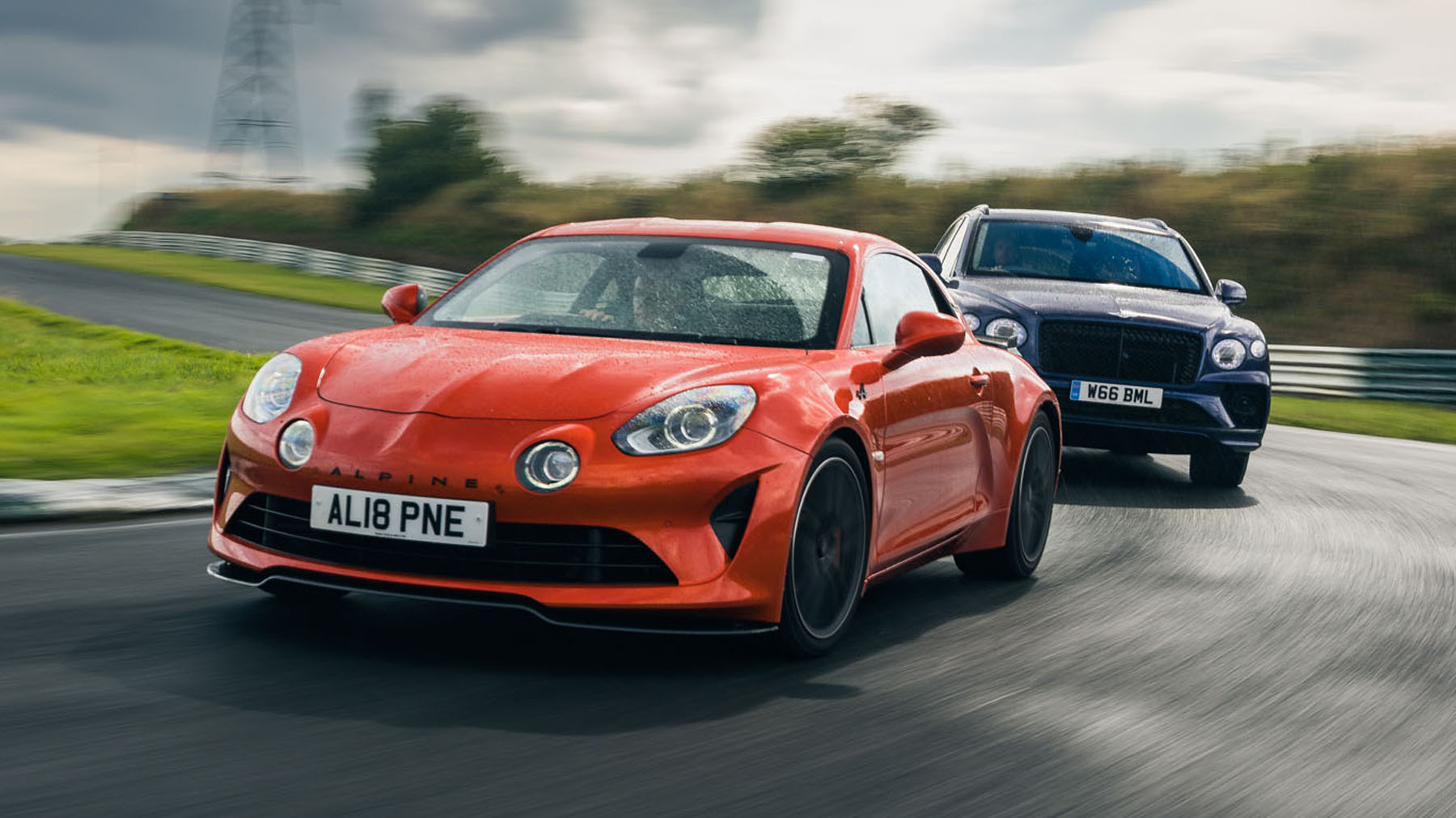 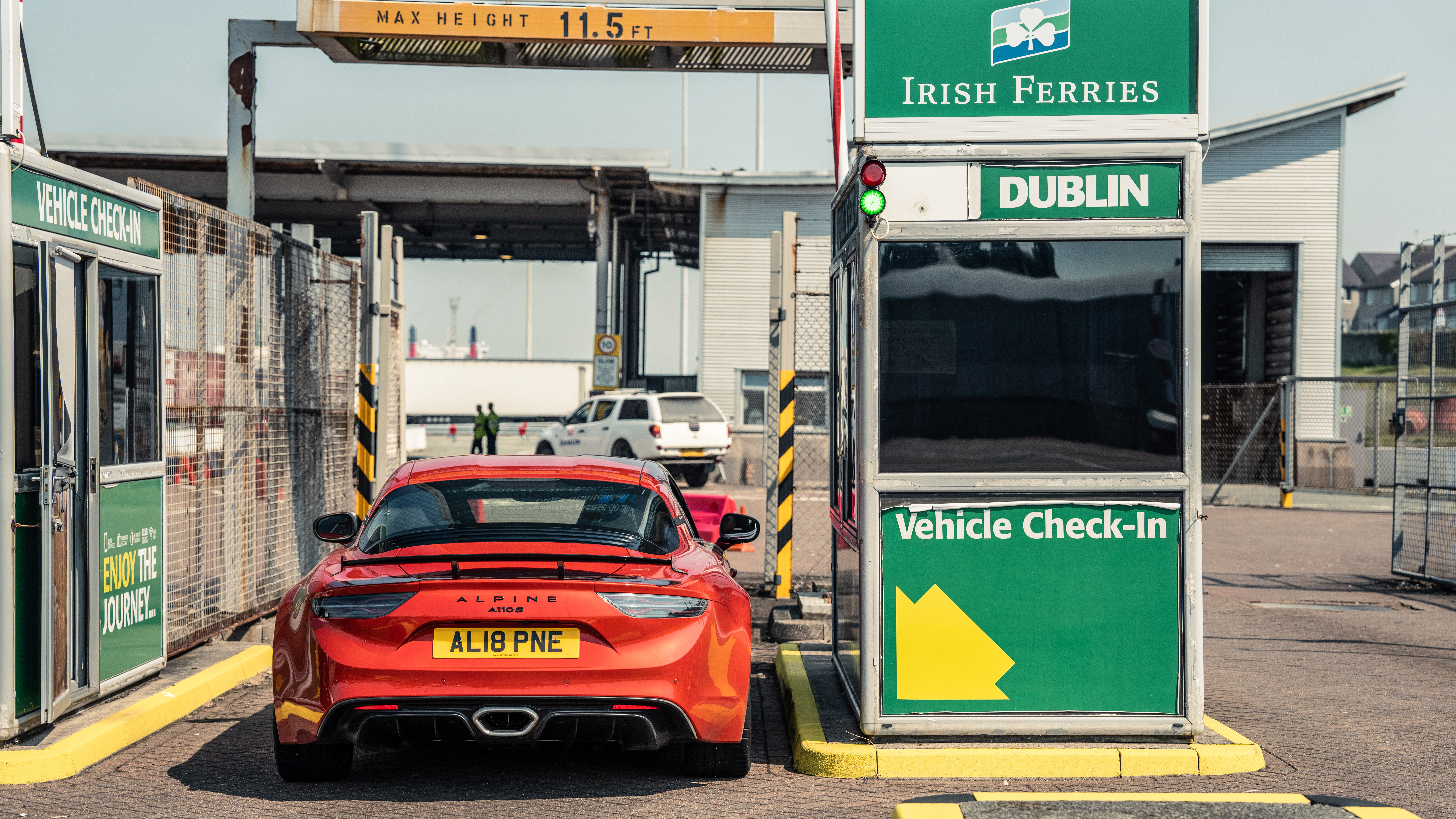 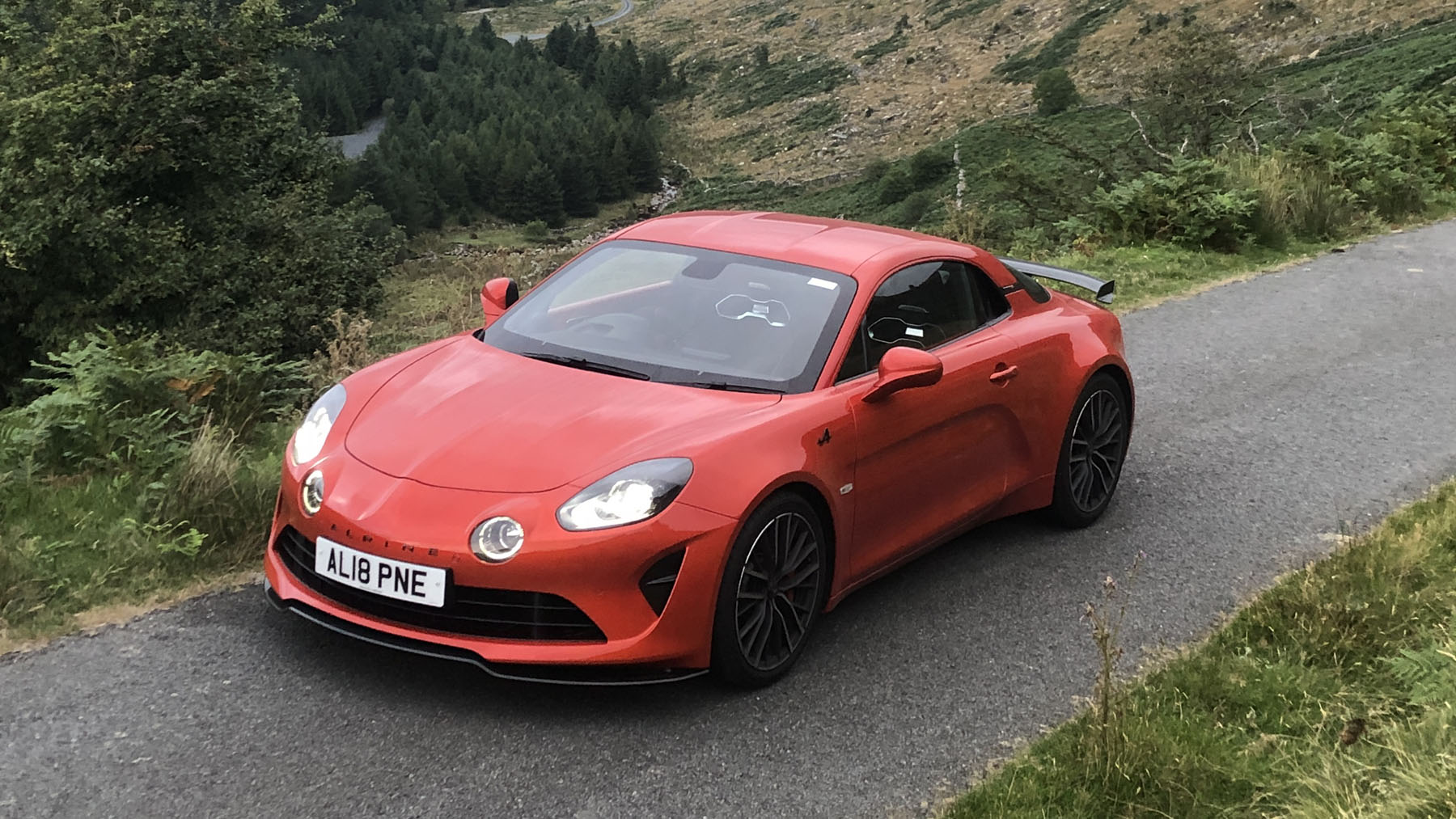 The smallest, lightest car in TG’s car park, and the biggest, heaviest. It wasn’t a deliberate choice, but it quickly became inevitable. We’re off to Mondello Park in Ireland to film James Deane’s smoke machi… mad drift car. That means we need something small, nimble and fast as a camera platform to chase his 870bhp BMW around and something big enough to haul all that camera kit there and back. The plan is an early Sunday drive up through Wales to rendez-vous at Irish Ferries’ Holyhead terminal to board ‘Ulysses’ and sail to Dublin. Or chunder off the side of it for four and a half hours in the case of queasy videographer Charlie Rose.

OM: How was your drive up? I bet you motorwayed it all the way.

RH: You’re not wrong, including that business class motorway: the M6 toll road. Our voyage started six hours ago when I picked Charlie from the office using five of the Bentayga’s 25-ish electrical miles. And he broke something straight away. Fooled into thinking the rear seat bulkhead was flat (it isn’t) and solid (it isn’t) he managed to battering ram a pelicase through the lovely leather quilted divider. Annoyed, I got on the road and tried to massage my annoyance out, but none of the modes was vigorous enough. Plus I’d used all the electrical juice by the time we’d breached London, so I’ll be spending the next four days lugging heavy electrical components around and watching my average fuel economy plummet – it’s standing at 27.1mpg right now. That’ll do my green credentials some good. Now, if there’s one thing I’m sure of, you didn’t take the motorway, did you?

OM: The Alpine actually cruises pretty well, but it’s just not as efficient as I assumed it would be. Alpine claims 42.2mpg but I’m struggling to get within 10mpg of that. Which is a roundabout way of saying I left the multi-laners at Birmingham and drew a straight line to Holyhead. Wonderful roads, but busier than I expected, which did allow me to prove what an effective overtaker the Alpine is. And polite, too. It’s not in the roaring, stomping mould, it just slips past stuff lightly and easily, a Willo the Wisp over the ground.

RH: That reference dates you. I thought I’d save the wallowy handling for the ferry. Direction changes aren’t the Bentayga’s strong point. But there must have been something that irked you about your little Alpine?

OM: There is one notable drawback: no cupholder. I had to stick my coffee in the storage bin between the seats, but when I braked it tipped over.

RH: I didn’t know you could get a coffee with a Happy Meal?

OM: It was only a bloody flat white! Suitable beverage for the A110S. Yours is the equivalent of a particularly heavy port. Speaking of port, it’s been years since I’ve been on a ferry. I’ve never even been to Dublin. Bet you’ve done a stag do or two here, haven’t you?

RH: I think so. Steve Jobs occasionally prompts me via one of his photo ‘memories’ folders that I’ve been to the top of the Guinness factory but I can’t remember a thing. So I think I had fun. But we won’t have time for sightseeing as we’re heading to Mondello Park, about 45mins from Dublin and via some very wet, very greasy muddy country roads. Follow me, try to keep up.

OM: Not going to be an issue now is it, no matter how much of a Bentley Boy you think you are. And Charlie’s not going to thank you if your cornering vigour results in a busted lens. It’s not like I’m going to tuck myself under your bumper anyway. The less I have to look at the Bentayga’s butt the better.

RH: Am I mad for thinking the Bentayga isn’t actually that ugly anymore? The mid-life facelift is work any LA surgeon would be proud of. Right, we’re here but I’m worried hanging camera gear off your lightweight is going to fundamentally ruin the delicate weight distribution and mean yours can’t complete a lap without crashing.

OM: We’ll see about that. My S wears the £640 Michelin Cup 2 tyres and Stig’s already proved its capabilities. Plus Mondello is tighter than Dunsfold and I reckon it really excels around the tight stuff.

RH: Off you pop then – go chase that lanky drift God in his mad M3. I’ll be watching.

OM: This is hilarious. I worried the A110S would be monstered by James Deane, but the turbo is responsive enough, and its size and agility means I can position it so easily, alter trajectory while receiving broadsides from HMS Drift behind me.

RH: Wow. Things are a bit whiiffffy. That thing smells hot, so you must have been really pushing. You certainly looked like you were pushing. Seeing James track you down then play with this little French sports car was like something from Frozen Planet II. Right, while James’s changing tyres (again), I want a go… in the Bentley. Just because.

OM: I’ll come with you. Show you round. Make sure I’ve got a bail out strategy when you inevitably make like a ferry and Ro-ro-roll over.

RH: Time for Sport mode. I never normally use it – doesn’t fit the car’s ethos – but I’ll make an exception here. But this engine… the single turbo V6 sounds wheezy at the best of times, now it’s weak, strained and downright unpleasant. Weirdly the brakes are easier to modulate and happier on track than on the road, because they don’t have to umm and ahh about how much regen to deliver. But I’m not really enjoying this so I’ll just invent new racing lines – across the chicanes and taking the apex from the wrong side.

OM: Quite enjoyed that actually, but I did feel like a nautical tender bobbing along in your wake. Let’s load up and head home. I’ve got race kit in the front boot, overnight bag in the back, everything else on the passenger seat.

RH: That is a joke isn’t it? The packaging is hopeless. The Bentley isn’t exactly ideal given you can’t move the rear seats, but we can still just throw everything in, break the rear bulkhead again and sort it out at home.

OM: You’ve still got to sort it out somewhere. But I do admit that I have to compromise. Quite a lot actually. I still haven’t carried a bike on this, which – as you can attest – is most unlike me. Question for you – well two actually - do you actually use the hybrid? And do you think that’s the best Bentayga Bentley does?

RH: I don’t use the hybrid mode, I use the EV mode as much as I can. It’s changed the way I drive as that’s when this Bentayga is at its best. But that also means you’re chained to a 25-mile limit. So it mainly mooches around London with the irony never being lost on me. But that’s also where it feels most luxurious. But weirdly this Bentayga never feels as luxurious as a Conti GT or Flying Spur, which is strange when they all have similar touch points and materials. It’s not a memorable car. Or the best Bentayga. The best Bentayga has got a big engine in it. Or maybe the next one, where it’ll have none at all. Anyway, fancy a race home? Me on the motorway you on remote bits of Wales? I’ve heard it’s chucking it down in England and you’re on ruined track day tyres. I know where I’d rather be. In a massaged chair on cruise control on the business class of motorways.

OM: Can’t be bothered. This is very much horses for courses, and mine’s a thoroughbred, yours is a Clydesdale. You plod along, I’ll send you pics from the middle of Wales.