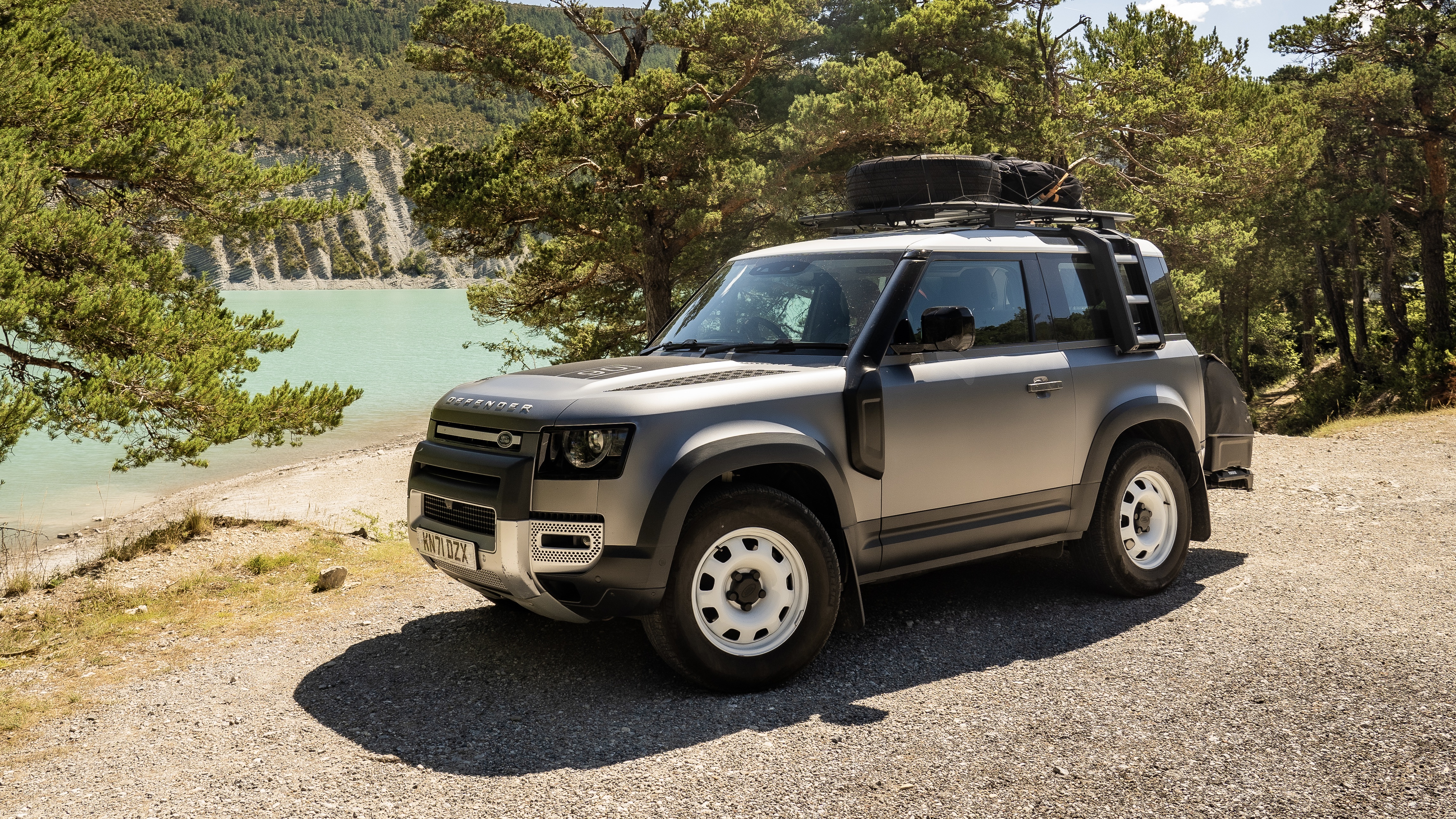 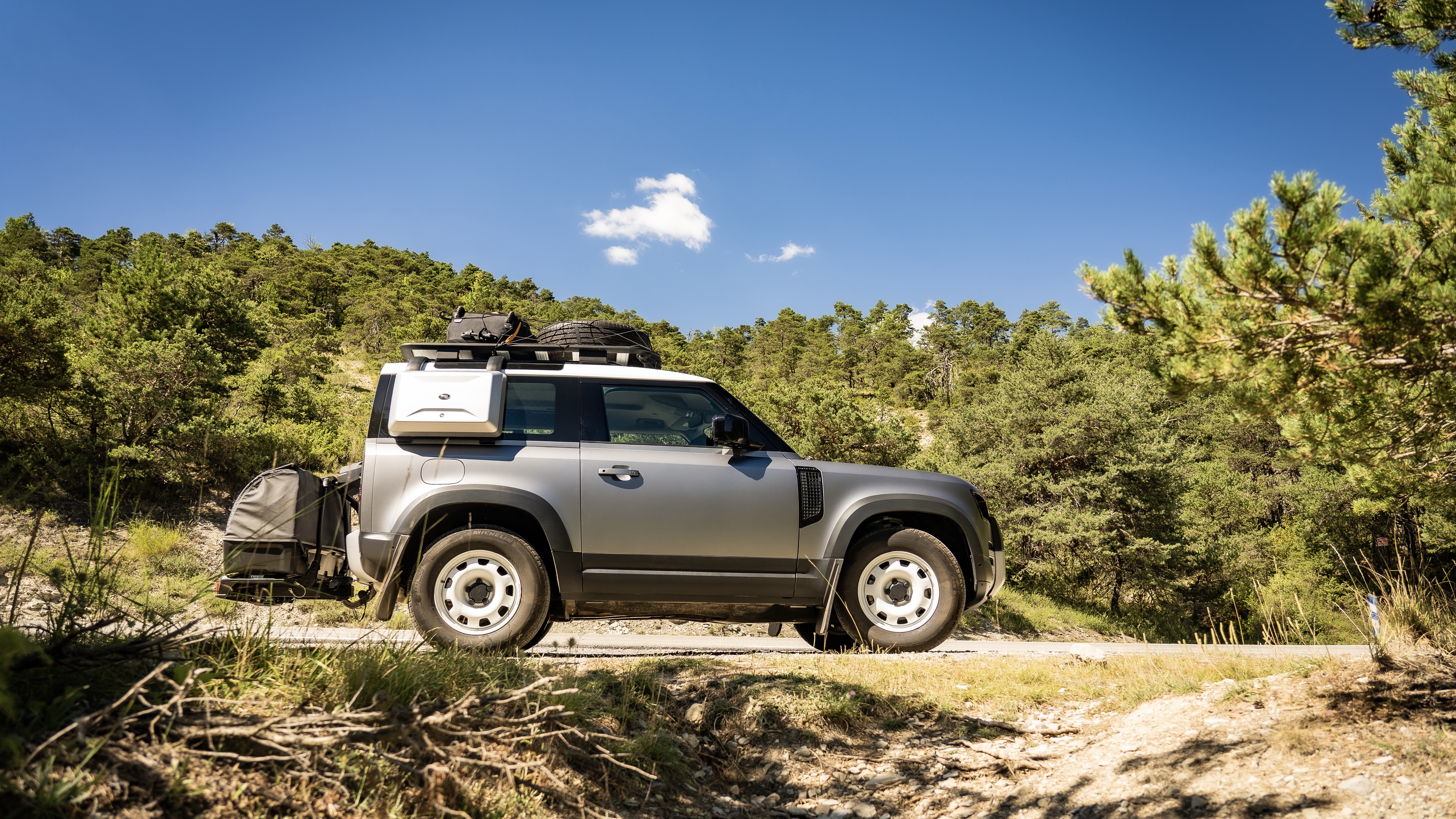 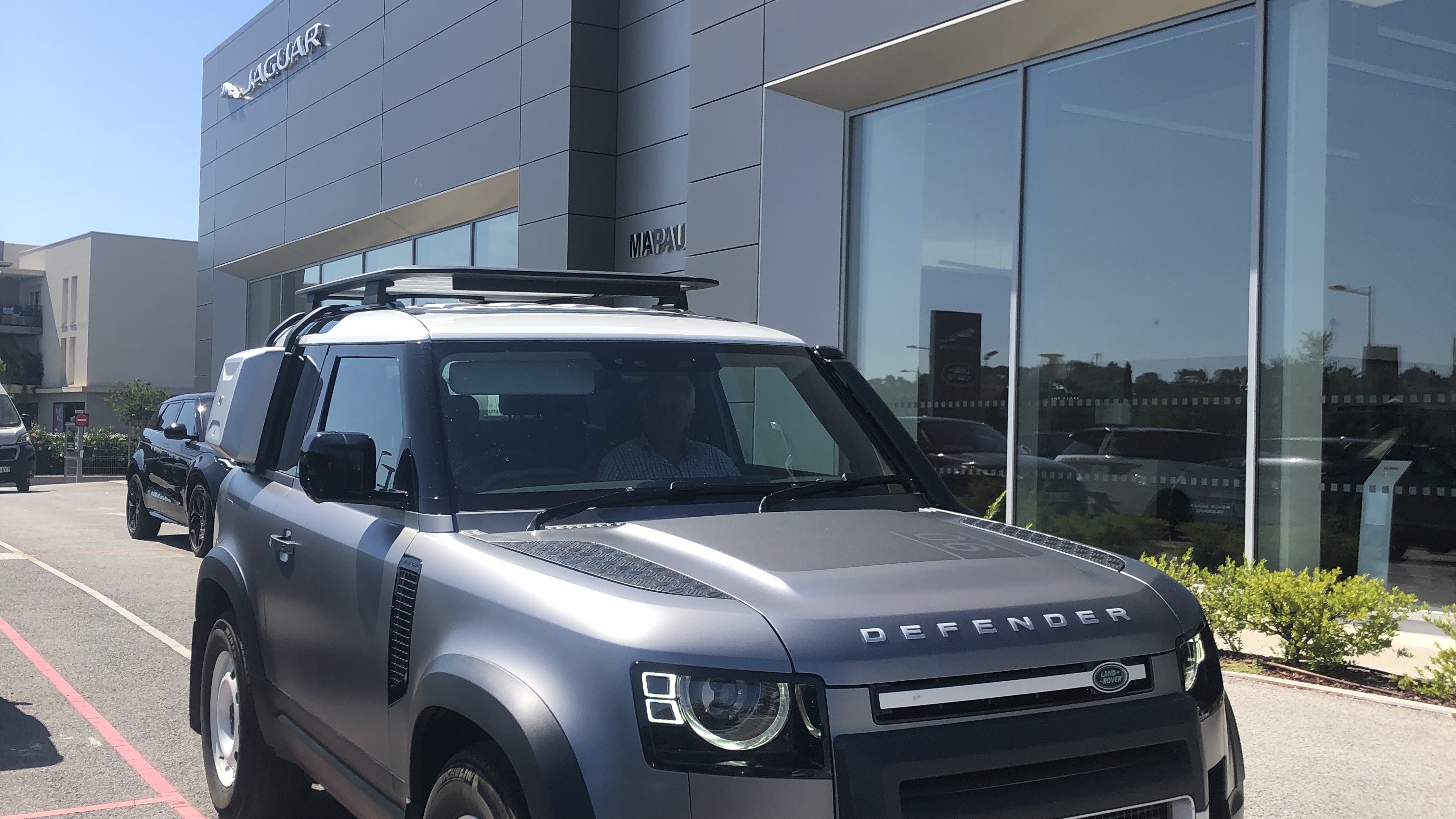 Remember Speed? This isn’t a reflection on the diesel Defender’s performance, but the film: Keanu Reeves on a bus that would blow up if it dropped below 50mph. Bear that in mind. So, we’re off to France on holidays, and I’m definitely going to take the Defender. Definitely. There’s a reason we specced it like a pack horse, and that’s for occasions like this, when the poxy boot just ain’t going to stack up. So the spare has migrated to the roof (where it’s joined by a pair of paddleboards), and that’s made room for a Thule BackSpace XT towbar box. Everything fits.

Eurotunnel is chaos. Four hour queues. While being sent on our second lap of the car park (the queueing system appears to be based on musical chairs) it strikes me that the cabin should be cooler. It’s sticky inside, not the 20 degrees the aircon is indicating. Hmm.

I call Land Rover Assist. There’s not much they can do, but they recommend powering the whole car down, locking it and leaving it for 15 minutes. So on the next lap of the car park we take a toilet break. No improvement. But now we’re through customs and border control, maybe everything will sort itself out in France.

Weirdly, it seems to. Northern France is empty, the Defender hums along at 80mph with whistling accompaniment from the stuff on the roof (note: it’s actually quieter carrying things than it is bare. Not sure the rack went near a wind tunnel in development) and there’s cool air. Not cold mind.

An overnight stop and the next morning the Defender is perfect. I call Land Rover Assist and tell them I don’t need a French dealership, the air con has fixed itself. It’s a great car to do distance in, this: seat comfort is exemplary, there are armrests, good views out, it’s almost as refined as a Discovery and we’re having a great time: tunes, games, plenty of space for those in the back, it’s communal and fun.

But my brain is ticking. I’m still convinced the aircon is about to act up, but what’s causing it? I park in the shade for our lunchtime picnic. Maybe it doesn’t like being worked too hard, so instead of 17, I set it to 21 degrees. It’s a Friday and Waze and Google both insist the main autoroute south of Lyon is the best bet. I’m sceptical, but go with it.

Should have gone with my gut. The traffic builds, speed drops. And as it does, the aircon cuts out. Cabin temperature rises. Now it’s gridlock. 41 degrees outside, while inside legs and arms stick to trim,  the surfaces become too hot to touch. We can’t even speak, and water supplies have run low. You don’t even give aircon a thought until it’s gone, do you? It takes an hour to get to the next junction. None of us care where we go, we just need to get out of the car, get water, find shade.

We stop and turn off, and I do what my Dad used to do on cross-continental drives: open the bonnet. The heat pouring out is staggering, like opening an oven. The engine fan runs for ages. I re-prime Land Rover Assist. Then another Defender pulls in beside us, British, ancient, ex-military ambulance, proper. He’s driving back from Rome, it’s been 40 degrees plus for days on end and, obviously, he’s got no aircon. My complaints feel hollow.

We continue cross-country to that day’s destination, Mont Ventoux. And – here’s where Speed comes in – provided I’m doing over 90kmh (56mph), I get cool air. Drop below that and even in the time it takes to drive through a small French village, the heat is back on. It’s… strange, but airflow through the engine bay seems to be key.

That evening it’s wonderfully cool up Mont Ventoux, and we coast the whole way down with the windows open, arms out, revelling in the breeze. The next day we manage as best we can heading to the coast. Better still, Land Rover Assist comes up trumps – the nearest dealer in St Raphael can fit us in the day after tomorrow, give us a loan car. I ring them, the service manager speaks way better English than my French, reckons he knows what the issue is and looks forward to seeing me. 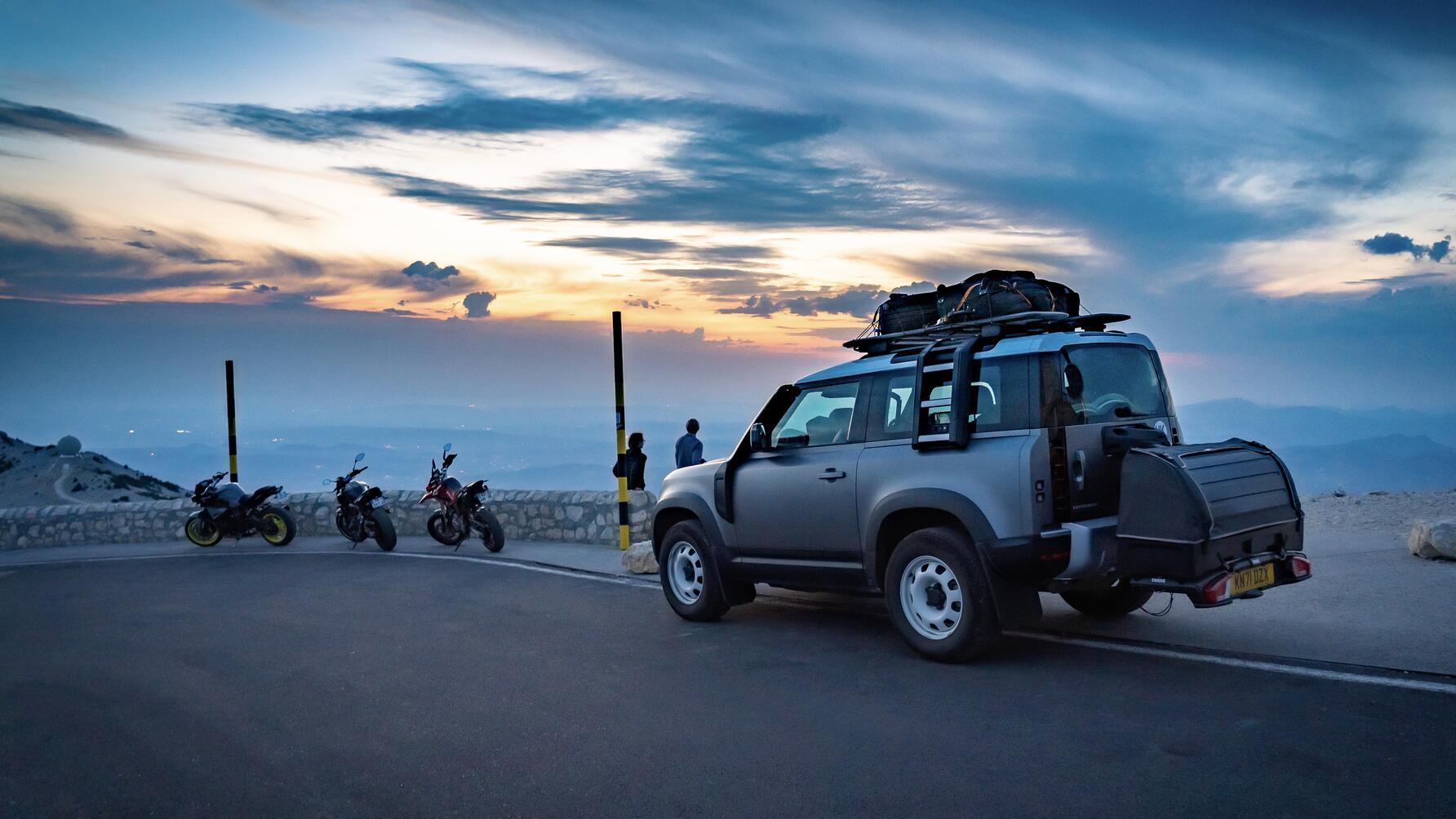 Let’s wrap this up so I can talk to you about other stuff. I drop the Defender, get handed a Jaguar F-Pace. It may be a PHEV, but it’s not nearly as cool for tonking around down here – the French love this new Defender, it’s been ogled everywhere. The next morning a phone call at 8.30am. It’s sorted. The aircon system had been over-pressurised. That’s it?! That’s what’s been causing all the heat, frayed tempers and hassle? It is, simple as that, although engine bay temperatures and airflow have had a role to play too.

From that point on the Defender, clearly on its best behaviour, doesn’t miss a beat. And we have such a good time with it. Three paddleboards on the roof, three sitting across the front, shoulders jostling. We bumble around, to village markets, hidden beaches and then off to the Alps where it carries e-bikes and investigates remote lakes. All is quickly forgiven. I wouldn’t have wanted to do this trip in anything else. Partly that’s the masochist in me wanting to prove the 90 works as a load carrier, but I’d rather this friendly, lumbering beast of burden than a Bentayga. It’s the rugged feel of it, the coping with sandy feet, wet cossies, dust and dirt, the churning, chunky honesty of it.

It's not efficient. Just 27.1mpg over 1,800 miles (reckon the roof kit knocked at least 4mpg off). And getting into the back seats is awkward enough that the generous space back there doesn’t fully appease. The £768 exterior ladder is a proper pain to use. I’ve got a technique to unlatch it but every time I use it still think it could, should be so much better. Same applies to the outside locker. It’s a wasted piece of design, could, should have been so much cleverer. Maybe Land Rover should have got Thule involved. The £595 BackSpace XT box is a revelation. Easy to use, great quality, clips easily onto a towbar bike rack and is lockable, secure – and at 500 litres, far more than doubles the Defender’s 297-litre load bay. And because it tilts, you can even use it with the side-hinged tailgate.

One of my main aims for the 90 while we have it was to find out if you actually need a 110. Sure, this trip would have been easier with the big fella, but at times we carried six people, big loads of kit and it coped. Using it was more of an event, too. It took a bit of effort, I spent a considerable amount of time on the roof strapping stuff down, had to do some planning. That made the car a bigger part of the whole adventure. And surely that’s what this Defender is about? It’s an enabler, a useful, capable, big-hearted machine. You might say the same of the old one, but come on, would you be happy doing 1,800 holiday miles in an original Defender? Ask your family before you nod too enthusiastically.

The issues (misfiring air con joining leaky coolant and occasional reduced engine power on the hit list) haven’t dented my relationship with the Defender – if you buy a Land Rover, they come with the territory. It gives the impression it’s always trying its best, a blundering goofy Labrador of a car. It wants to be a good boy, but sometimes it gets things wrong. Luckily for Land Rover it’s too bloody lovable for me to remain angry with it for long.