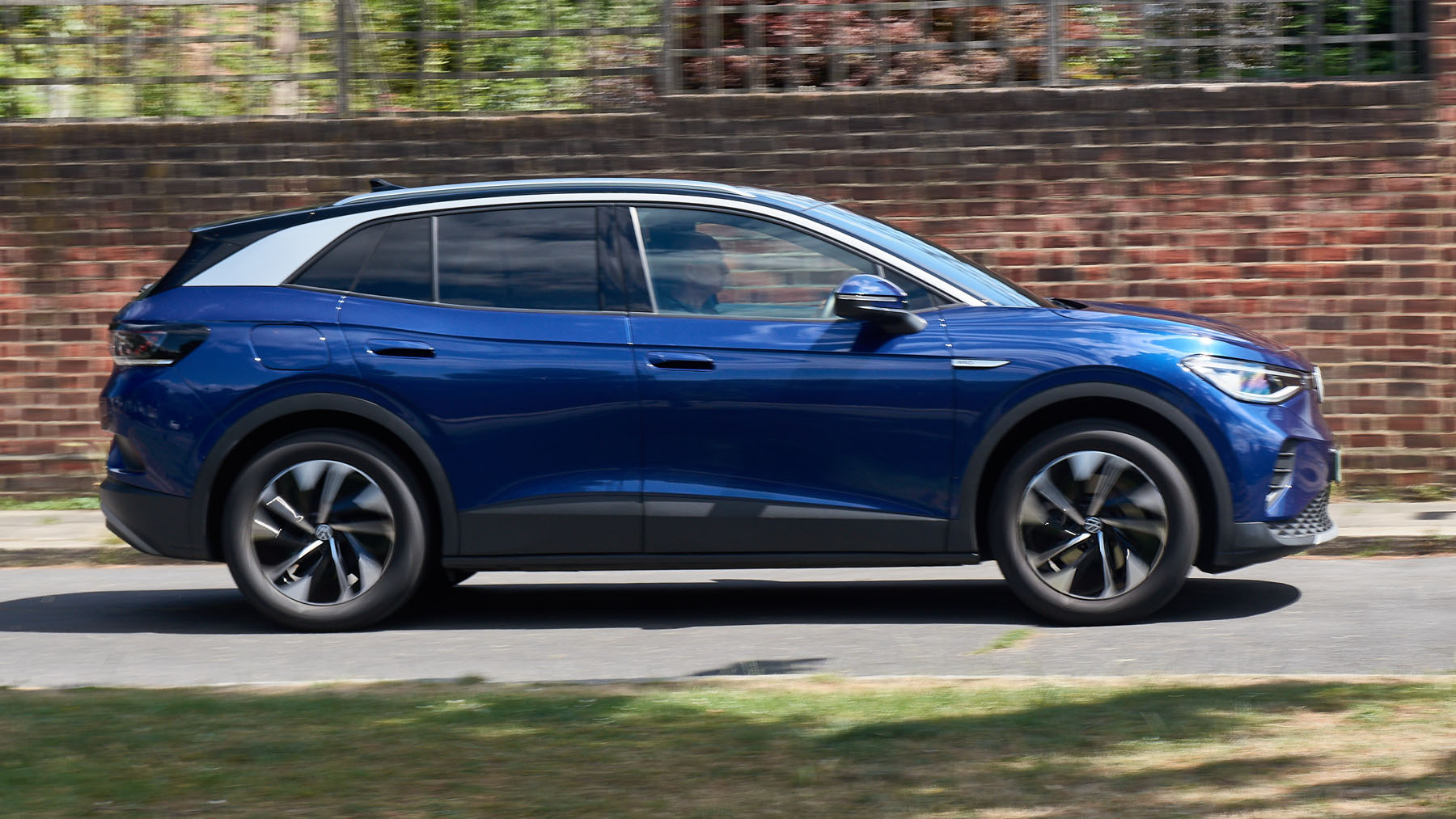 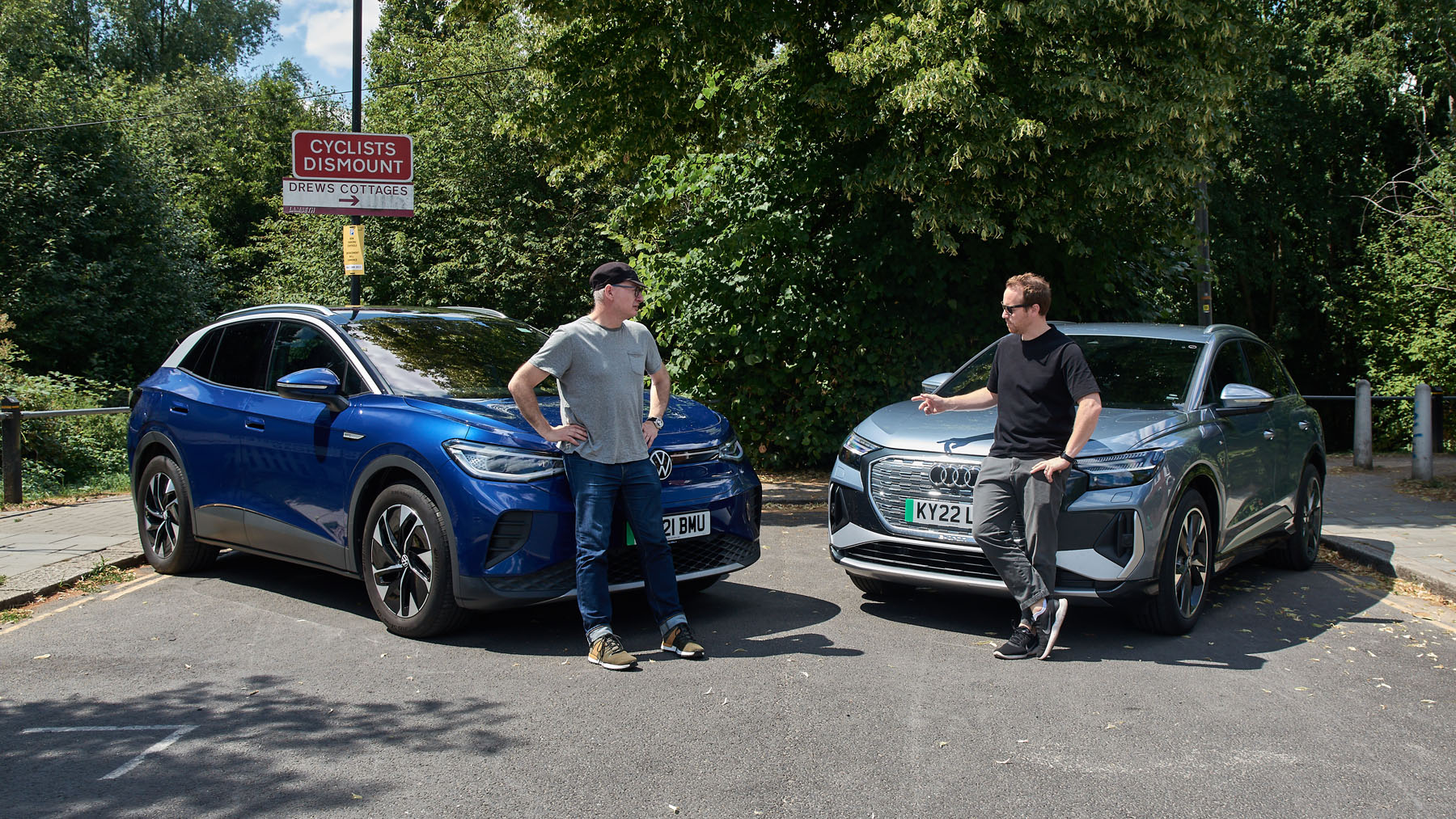 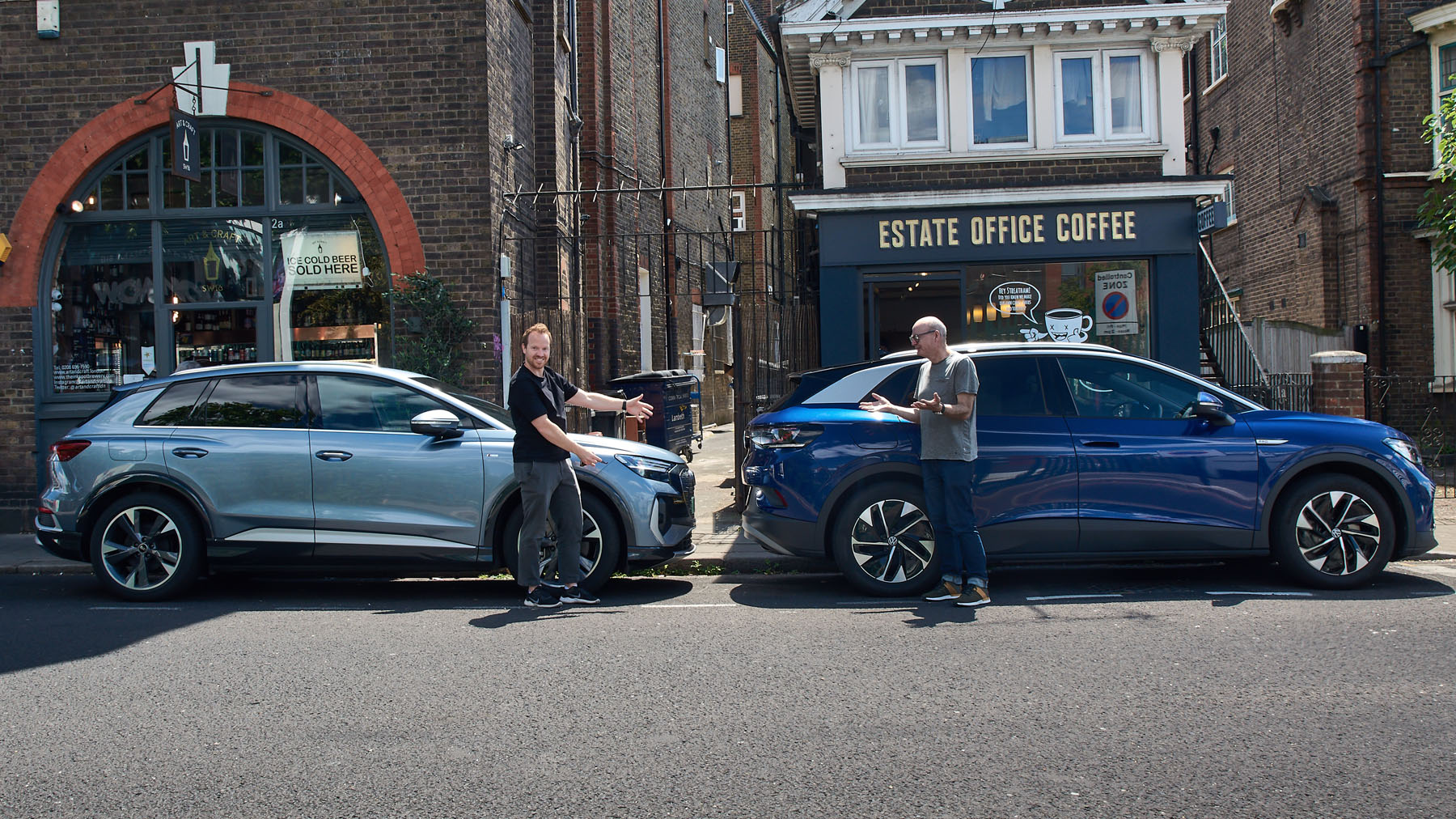 Jack Rix: Mr Horrell, we meet again… outside the exact same coffee shop we did 18 months ago to compare Honda e and BMW i3. We really must get some new locations.

Paul Horrell: Ah well, the coffee here's good. And we have at least got some new cars to argue about. The i3 and e were both designed as short-distance compact cars, but they met that aim by very different technical and design solutions. Not so this time. Here we've got two family electric crossovers that are exactly the same technically. They're even made at the same plant in Zwickau, Germany. But I rather fancy I've got the better deal. The differences are looks, price, perhaps even image.

JR: It’s true, when they’re parked next to each other and you fully appreciate the identical proportions and shared tech, it’s tricky to justify spending more on the Audi… but Audi is the master of doing just enough to make its prices stand up. And it’s not even close on the looks front for me, there’s an amorphous blobbiness to the ID.4’s back end that’s mildly offensive, whereas the Q4’s creases and stubby nose aren’t adventurous, but certainly understated and premium – bang on the brief.

PH: All those creases and chrome? Hardly 'understated'. But yes, the Q4 looks like it slots neatly between the Q3 and Q5. Which is why I dislike it. For most owners, a premium SUV does just one sort of mountaineering – the social kind. I don't want to be associated with that. I want something that looks as little as possible like a normal German crossover, and more like it might be electric. That said, I do have to concede your point about the amorphous blobbiness of the ID.4. The principle of its design suits me, but the execution doesn't. Now, opening the door to their interiors…

JR: This is where the Audi pulls a few car lengths ahead, surely. I love the way this interior looks – from the chunky slices of metal on the steering wheel to the sleekly integrated screen and the quilted seats. All very smart, all very Audi. However, Audi is also very good at putting the expensive bits where you see and touch them, and saving money elsewhere. So there’s cheaper plastics lower down, and manually adjustable seats (on a £62k car! The horror). The infotainment works great except for the touch sensitive thumb pads on the wheel, they’re crap, although I must be honest and point out I only use the wireless Apple CarPlay 98 per cent of the time, risking the built-in nav only when I’m in deepest Normandy with no phone signal, and the radio when I fancy test match special instead of a podcast.

PH: I like the cabin trim and decorative simplicity of the ID.4. And when I drew up outside the cafe you too couldn't help saying you like the colour scheme. (Sadly that was a launch pack and has fallen from the configurator.) Ah but Jack I do so covet the Q4's interface and screens. The ID.4 has VW's usual awful laggy touchscreen and an info-deficient driver's display. I see you have the Q4's binnacle set to show 13 different numerical values, which might be a bit much. But the ID.4's four – speed, cruise set speed, range guesstimate and navigation ETA – are too few. And don't get me started on the idiocy of giving the driver just two switches for the four electric windows. Grrrrr. Need to calm myself… by going for a little drive in south London's traffic mayhem.

JR: Breathe Paul, just breathe through it. In fact, toss me your keys, here’s mine. Ah yes, I remember this interface from my drive to Scotland and back in the ID.3, less said the better. The way it drives is fascinating – by and large there’s a mouse’s fart between this and ‘my’ Audi – but it does feel a fraction softer, waftier and pillowier (it’s a word if I say it’s a word). Got to say I prefer the slightly sharper steering and firmer ride in the Audi, because it’s not that firm at all. How you enjoying that upper-premium experience PH?

PH: As you say, there's so little to distinguish these two cars. Odd to think that this is the only Audi except an R8 RWD that's driven by the rear wheels alone. Not that you'd notice. Like the VW, the Q4 is a household appliance rather than a driver's car. Dynamic engagement has been wholly sucked out of the pair of them. But they're relaxing in town. Roomy and efficient too, so both of them have served us well for long trips with loads of people and clobber. Now, the money. The VW feels cheaper inside, and it is cheaper, whether you buy on sticker-price or finance. Is the Audi worth the extra? It thinks it's better; I don't think it is. Still, editor Jack is the boss, so I'll let him have the last word.

JR: Bizarre isn’t it, how you find yourself championing your own longtermers over rivals, like by taking the keys for six months you’ve sworn to uphold their honour… which we haven’t. But I’m sticking to my guns here, I’d take the Audi every day of the week. For a fairly joyless couple of cars, it at least gives me illusions of grandeur. That’s what being editor is all about, isn’t it?

Back to: Report 6
Advertisement