Hyundai says the all-electric Ioniq 5 is unique: a hatchback with the cabin space of an SUV. Here it faces one of each

It’s actually the same size as the Mach-E. Yet something about it makes it look hatchback-sized. Is it all the straight lines and arrowheads? Or the proportions, which closely match the Volkswagen ID.3? The VW and Hyundai look the same size when photographed singly. When parked side by side the VW is lost in the Hyundai’s outline.

The Ioniq is a cognitive illusion as well as an optical one. Hyundai mentioned it draws stylistic inspiration from the company’s original car, the Giugiaro-designed Pony of 1975. We assumed the Ioniq 5 would be that small. The Pony was mechanically based on the Morris Marina, a dreadful crapbox itself based on the Morris Minor. Fortunately outside our obsessive little circle, no one knows or cares about the Pony. Everyone else will take the Ioniq 5 at face value. 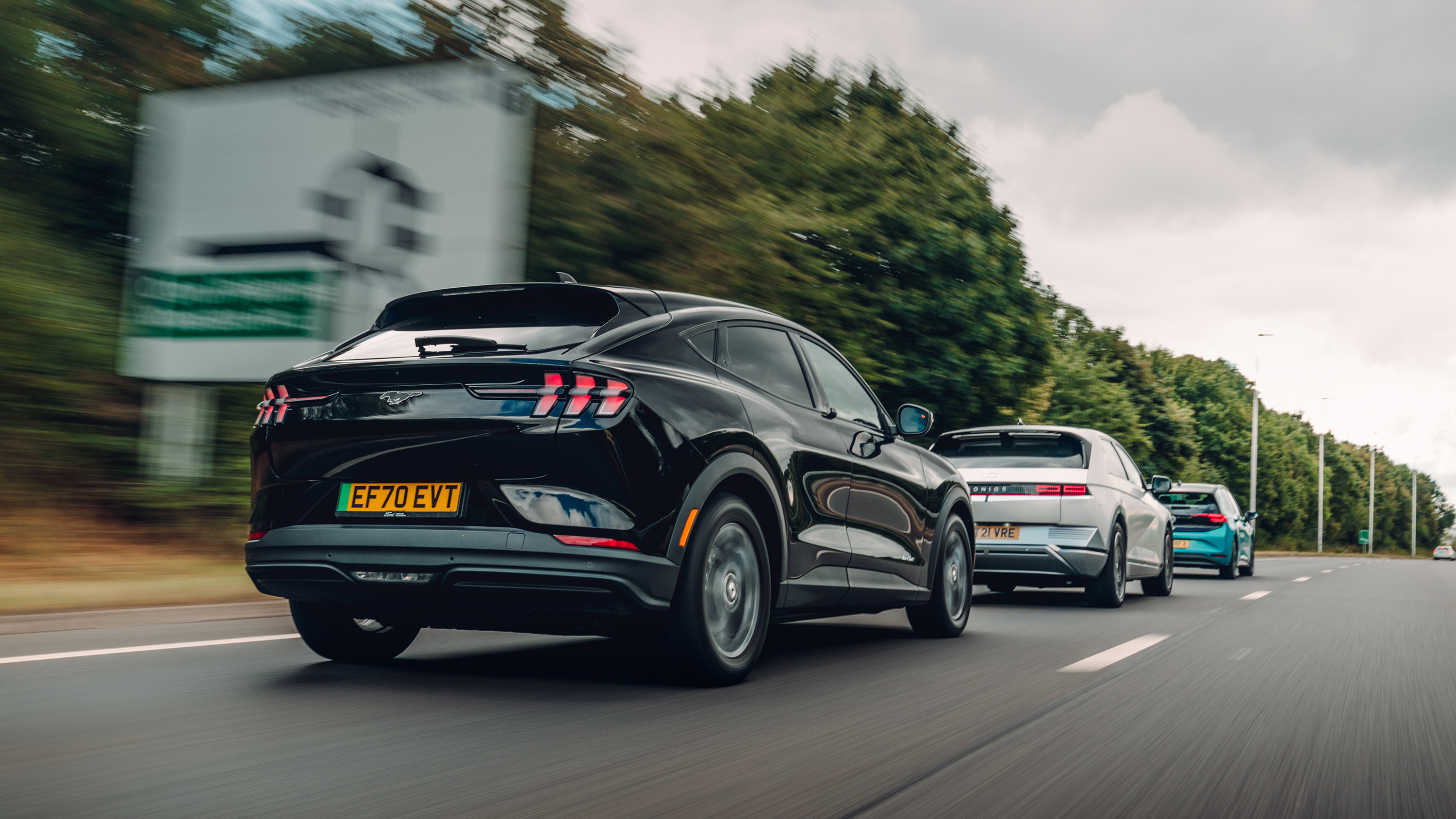 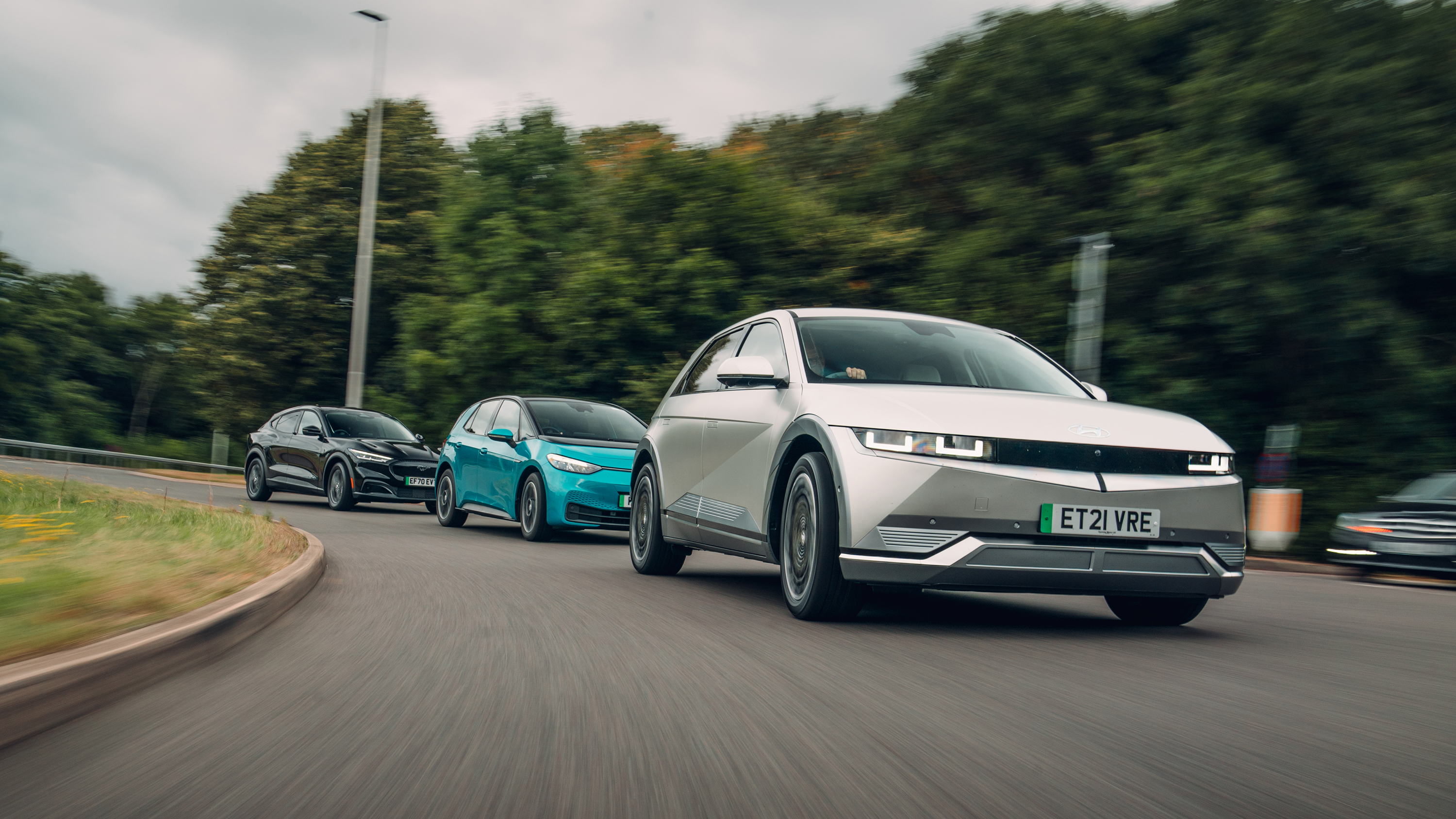 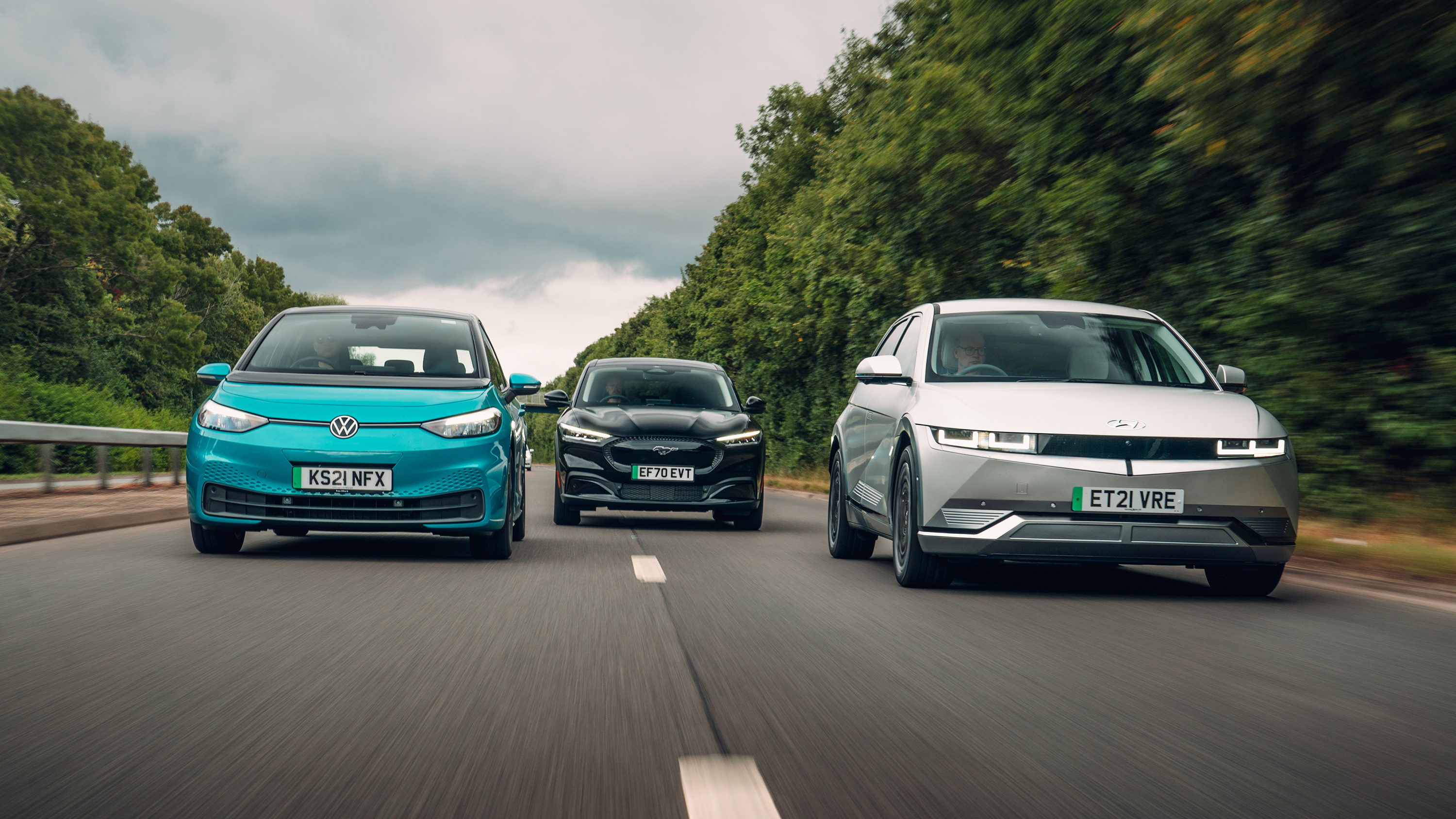 At face value it’s big. Wide, especially, in a way that’s quite intimidating (for the driver and everyone else) in tight urban streets.
The swivelling heads as it passes prove it’s truly distinctive looking, with a chiselled discipline that does indeed riff off Giugiaro’s super-influential Seventies ‘folded paper’ phase. But back then there were no spangly LEDs, or walnut whip intricate alloys that could’ve been 3D printed. Some of the ridged faux-metal exterior plastic ornament is frankly overdone and cheapens the effect.

Still, not much cheapens the Ioniq 5’s cabin. It’s genuinely premium. Materials are at the same time not obvious choices, and yet well chosen. The ambient lit dash and door cards could have been uprooted from a cocktail bar. A sliding console between the seats provides epic amounts of storage. The flat floor between the front seats is a mixed asset: put anything there and you fear it’ll slide into the pedals at the apex of a left-hander.

I’m afraid I can’t get comfy. These seats, flat and sofa-like, are an option. I’d go without. They’re designed to recline for sleeping. I use a bed for that. They give me backache when driving. The steering wheel is too distant and I need to set it too high if I’m to see the instruments. And the centre screen is a stretch, especially its home button, which is top left. To match the upholstery, the two screens default to light grey. That’s dazzling. You’ll hastily reconfigure to white-on-black. The wheelbase, a full 3m, does translate into pretty fine rear legroom, though with these optional bulky front chairs it doesn’t beat the Mustang. The boot is surprisingly shallow, and the front boot good for little more than charge cable storage.

As the Ioniq’s styling evokes an old Hyundai, so the Ford’s evokes another Ford: a Mustang. Hence the long bonnet and tapering glasshouse, and the surfacing of its haunches. The lights too. But it’s a five-door crossover not a coupe. As with the Ioniq, if it were a more successful visual mimic, it’d be a far worse family EV.

"Driving the Hyundai, I can’t get one word out of my head. That word is Audi"

It’s a Ford and an American car, so the expectations of the Ford’s cabin quality are unpropitious. In fact, apart from the Fiesta stalks, which work well anyway, there’s nothing to take issue with. Design is attractive and clean, materials apposite. A cloth beam crosses the dash like a soundbar, and the rest coheres simply with it. The big screen is like a Tesla’s, only easier to use. Seats and driving position are spot on. Rear room is fine, the boot the best on test. The frunk is a biggish bin with a drain hole at the bottom.

The ID.3 departs oddly. Look at the design. Its sides are too flat and it actually looks hollow and weak. And inside, too much hard plastic meets absurd infelicities in the touch controls. We’ve dwelt on those capacitive sliders and buttons often enough when talking about the Golf. But the ID.3 adds to the idiocy by using a tiny driver’s screen which can’t show the energy efficiency info that’s critical to EV driving. That resides deep within the central screen. If using phone mirroring for nav or music, you have to keep jabbing at the screen to switch.

Still, if you choose colours well, the ID.3 has a simple and architecturally interesting cabin, if one where the materials got little love. The seats and driving position are fine and it feels agile just because you’re low. The back seat and boot are smaller than they are in the bigger crossovers here, but the gap isn’t night and day. Strangely, it has no frunk.

As specced here, all have rear motors only, although they can have more power by adding a front motor. The test Hyundai is the bigger battery option, at 73kWh, with 217bhp. The Mustang carries its smaller battery, but still a useful 68kWh, and 269bhp. This ID.3 has the middle of its three available batteries, 58kWh, and a 145bhp motor. WLTP ranges are 264 miles (VW), 273 (Ford) and 298 (Hyundai). Our summer driving pointed at a real world 230, 240, 250 respectively.

Driving the Hyundai, I can’t get one word out of my head. Audi. Its cabin matches Audi for soft feel, solid, hi-res design. And it moves down the road with stout feel, sitting four-square on the road, deliberate in its movements. Just like an Audi. Reassuring and refined, yes. Engaging, not so much.

Numbers on the speedo spool up nicely, but it never exactly snaps forward. This is a heavy car gathering momentum, and it does tail off at outside lane speed. There are plenty of options for regeneration, and the blending of that with friction is well integrated. So gaining or losing speed is easily managed.

Getting the Ioniq around a corner needs a bit more care, even though the steering is well calibrated. Steer too suddenly and the understeer’s an issue, as is diagonal pitch. You’re always aware of the weight, not just changing direction but over heaving surfaces too, where the dampers lose interest. Act smoothly though and it squirts nicely out of a corner or roundabout. The ride is a little nuggety at low speed, but the tyres are quiet and overall it’s a delightfully peaceful way to get about.

The Ford feels as much like a Mustang as an electric crossover can. It’s emphatically quicker to accelerate than the Ioniq. Pity about the brakes: they used to be indecisive but now they aren’t so sure. European Ford does great steering but US Ford doesn’t, so we get gluey weight and pointlessly strong self-centring. Still, it feels more lithe than the Ioniq.

If you want a self-consciously rear drive car, here it is. Stick it in the so-called ‘Untamed’ mode (sport to you and me), which loosens the traction control, then go looking for what, back when we had gears, would have been a second-gear bend. On a twitch of your right toe it kicks the tail out like, well, like a Mustang.

It’s all good fun, even if there’s a rubbery imprecision in the reactions, perhaps a result of the tall profile 18-inch tyres. The ride’s not significantly different from the Hyundai’s apart from a tendency to pogo on B-roads rather than corkscrew. It’s the noisiest car among these three quiet cars, not just because of the (switchable) synthesised engine sound. The tyres pitch in too, and at motorway speed the door mirrors whistle like the kettle’s boiling.

In the ID.3 it’s like your ears popped. Everything is muted: powertrain, tyres, air. This motor delivers little absolute acceleration, but it’s still responsive, so for getting out of junctions or round suburban obstacles, it has all the zip. Only out in the countryside do you wish you had the 204bhp option.

Smallness and lightness do it favours on a twisty road, as it’s decently damped and steers accurately. But it really is a bit of an appliance. All its controls and reactions are accurate but numb. Its best quality is a superb ride. 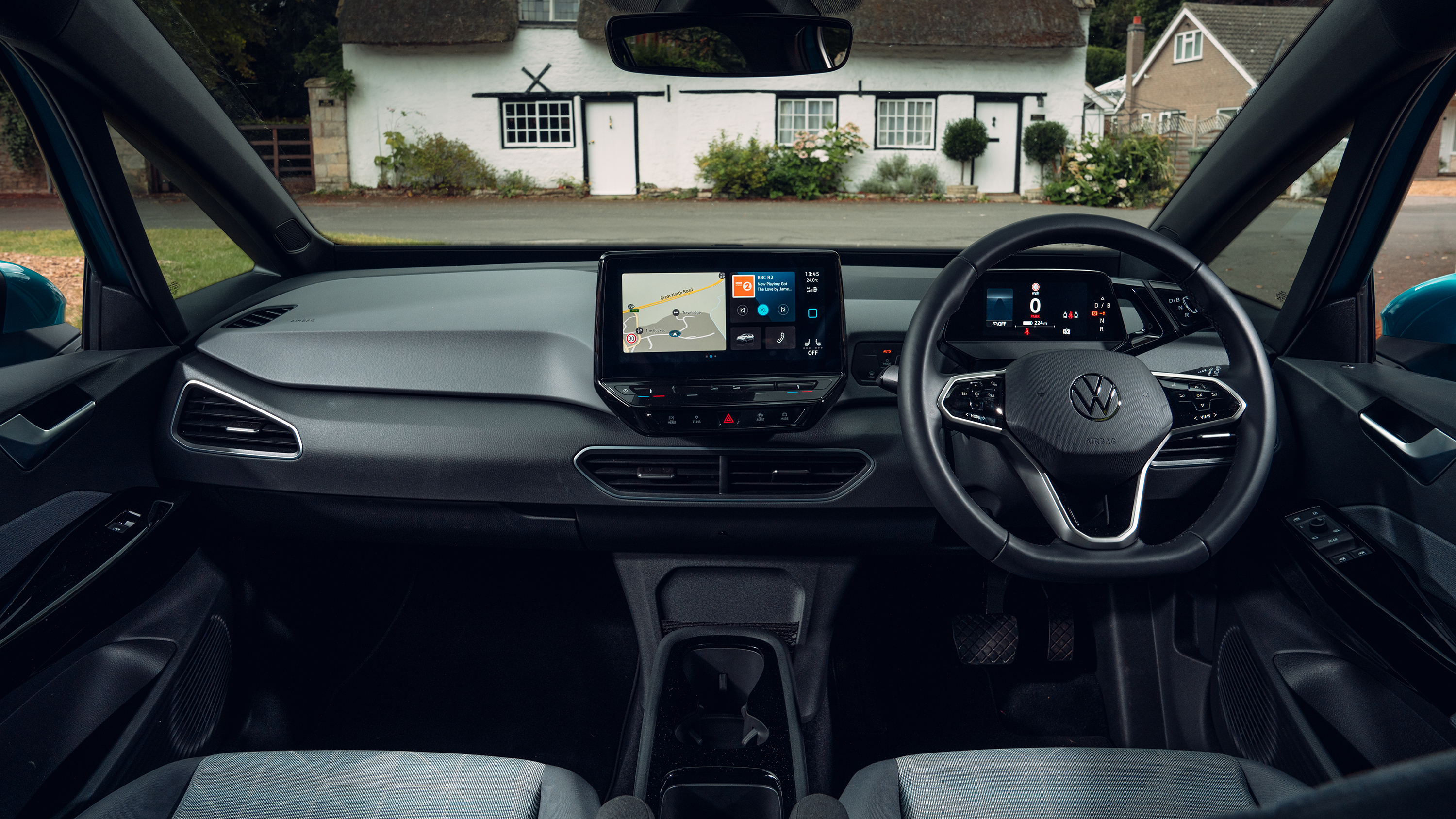 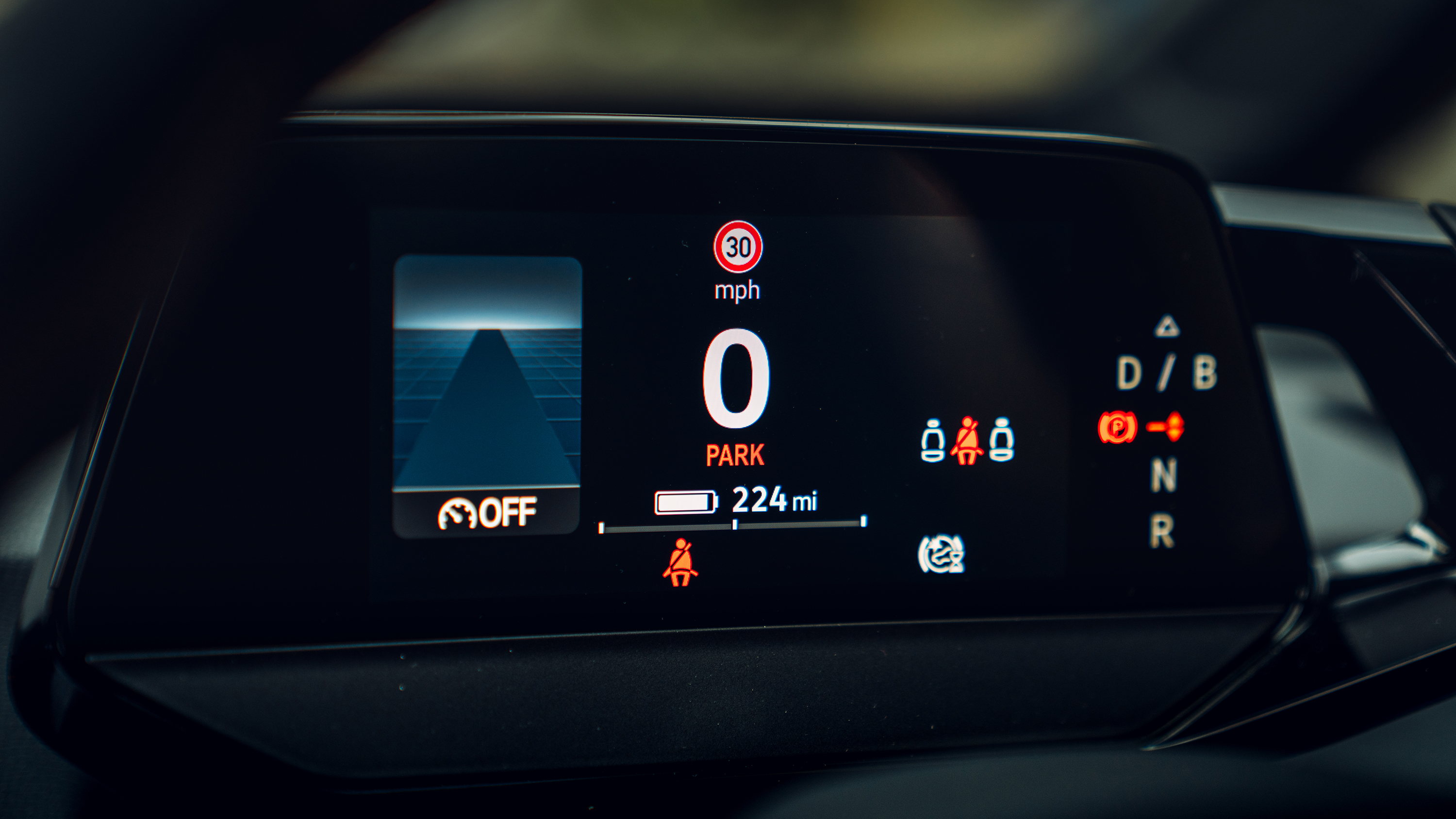 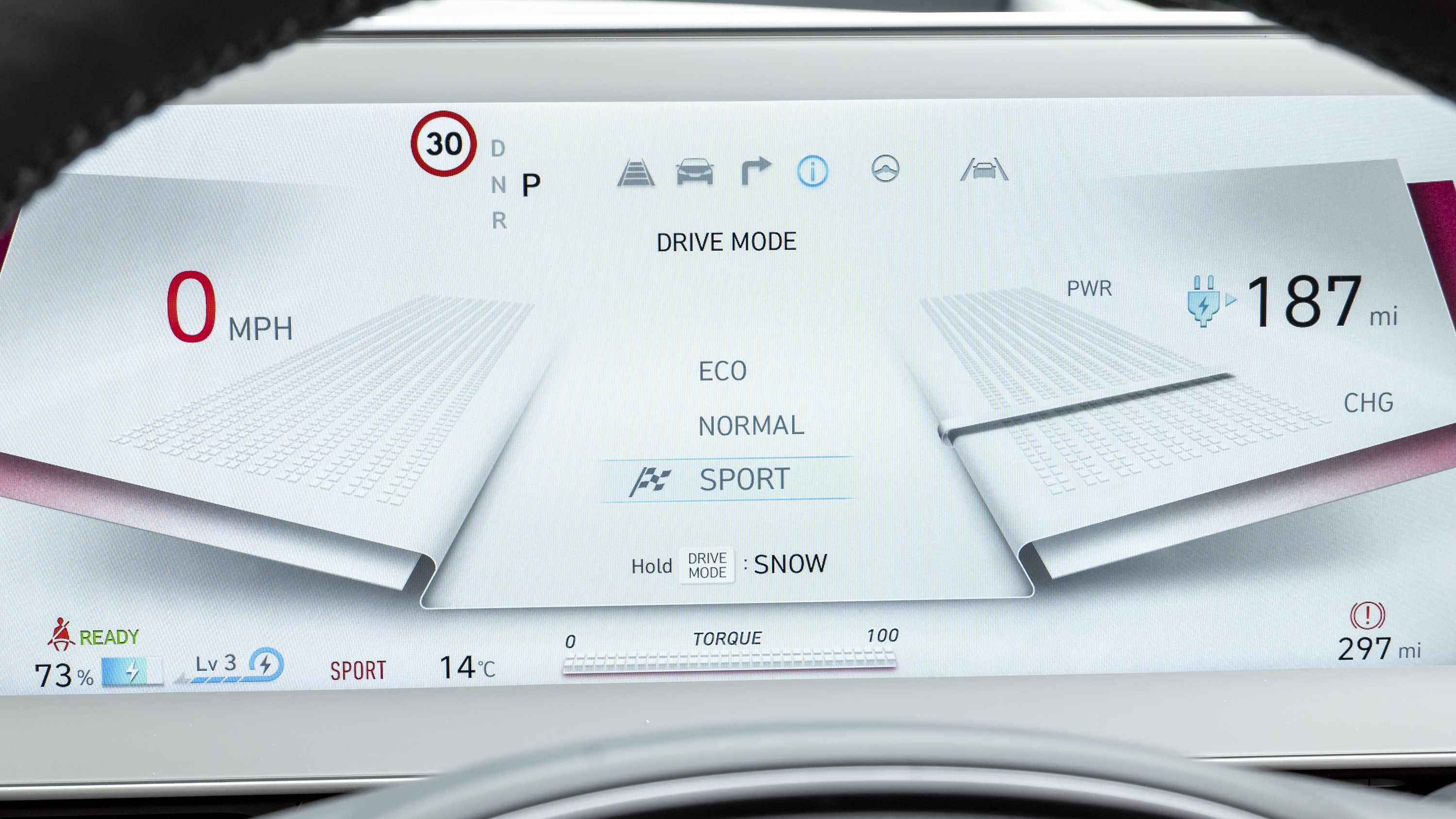 For EV buzzword bingo, the Ioniq is your car. Its all-new platform is capable of charging at up to 350kW. It can also do vehicle-to-load discharge. Both of these are limited benefits at the mo: we managed only 130kW charge speed on an Ionity charger. So you might as well pay less per kWh and use the 150kW chargers, adding about 80 miles in 10 minutes.

The Mustang can accept charge at a peak of 115kW, the VW 100kW. If you used the Hyundai’s car-to-load system to charge either of the other two, you’d add about 10 miles an hour. Not a great use case. But there are times when this ability to provide external power would be handy – like when you’re camping.

For a verdict here, you can’t ignore price. The Hyundai is £45k in Ultimate trim which includes a super fancy HUD and Bose sound system. But an efficiency pack (heat pump and battery heater that’ll both add range in winter) is extra. Like the Ford it has panoplies of effective driver assist.

At the other end, the VW has DIY seat adjustment, no reversing camera and less driver assist. It’s smaller. Obviously an ID.4, or indeed Audi Q4, on the same platform would be a closer rival for the Mustang and Ioniq, but we wanted to put some context around the Ioniq’s hatch-like styling. The ID.3 is well packaged and when you’re driving it the absence of bulk is an asset. It’s cheap enough to get the plug-in grant and ends up at a little over £28k. Sure it’s slow, but you can remedy that with a 204bhp version for £1,320 extra – money fabulously well spent.

The Ford is £42k but misses out on a few gewgaws you get in the Hyundai’s top trim. Still, it’s the quickest, the most engaging and the most useful. It’s not as intriguing or attention-grabbing as the Ioniq. But it’s the one we’d have. 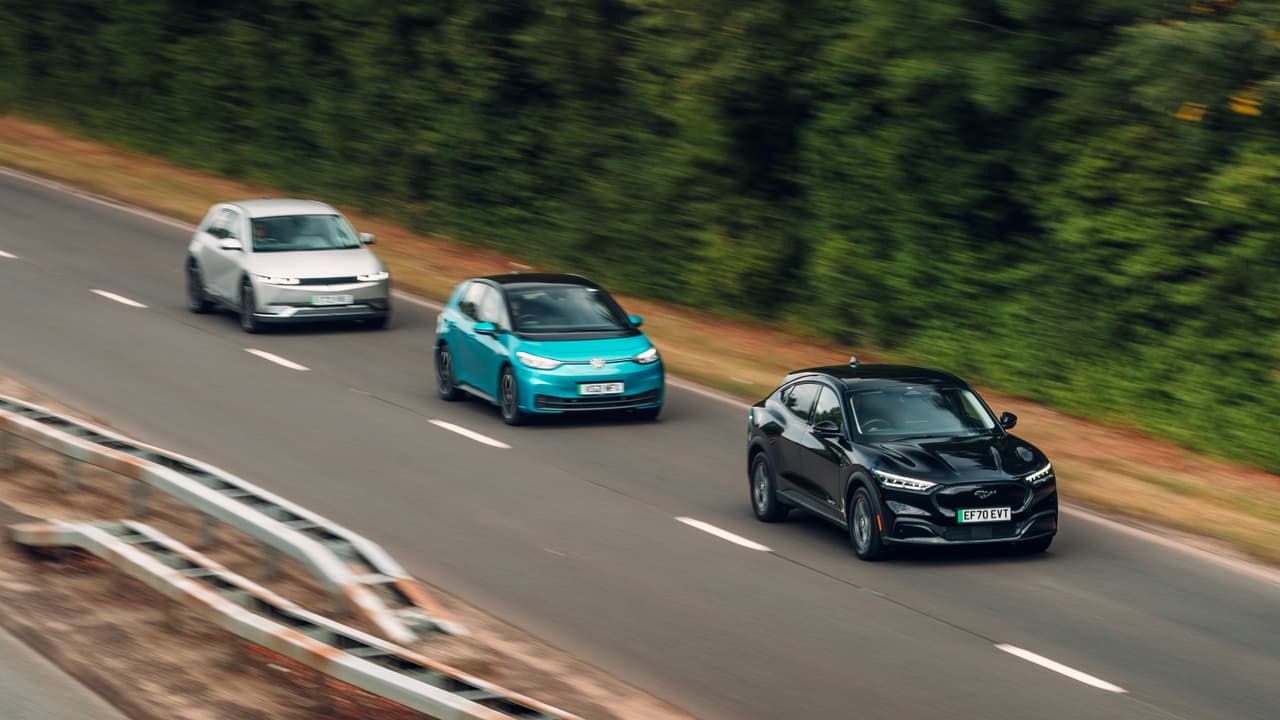