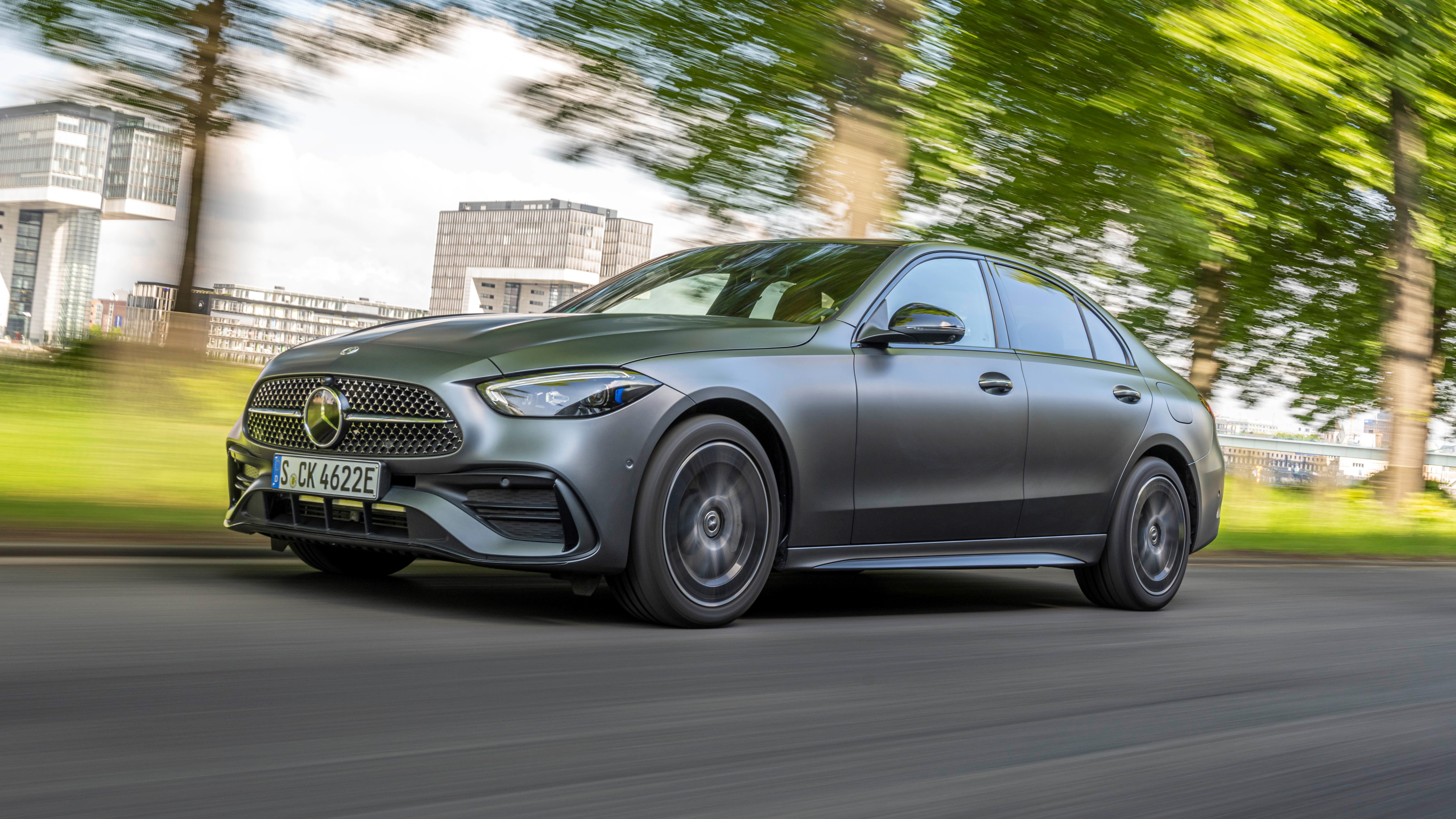 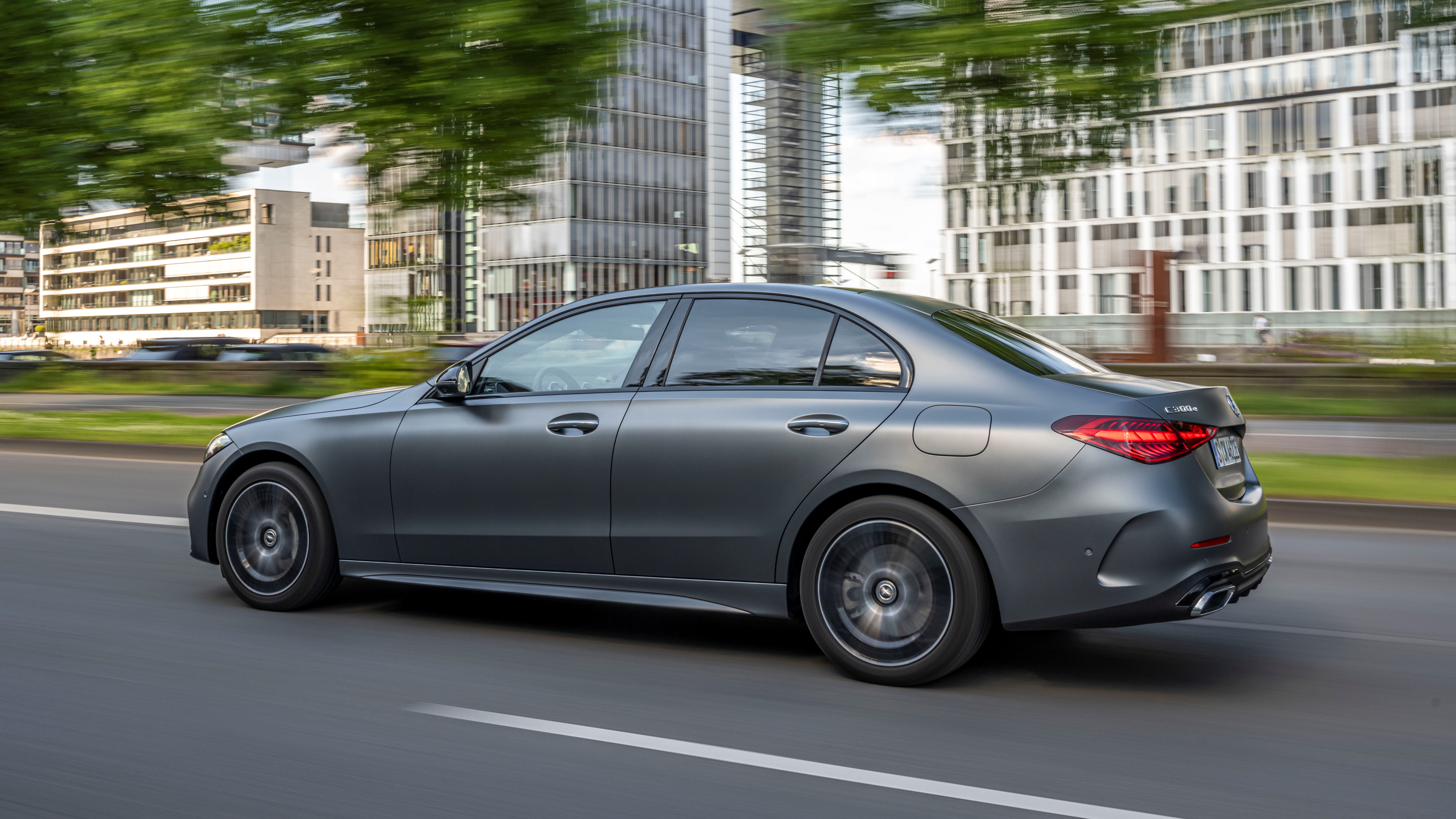 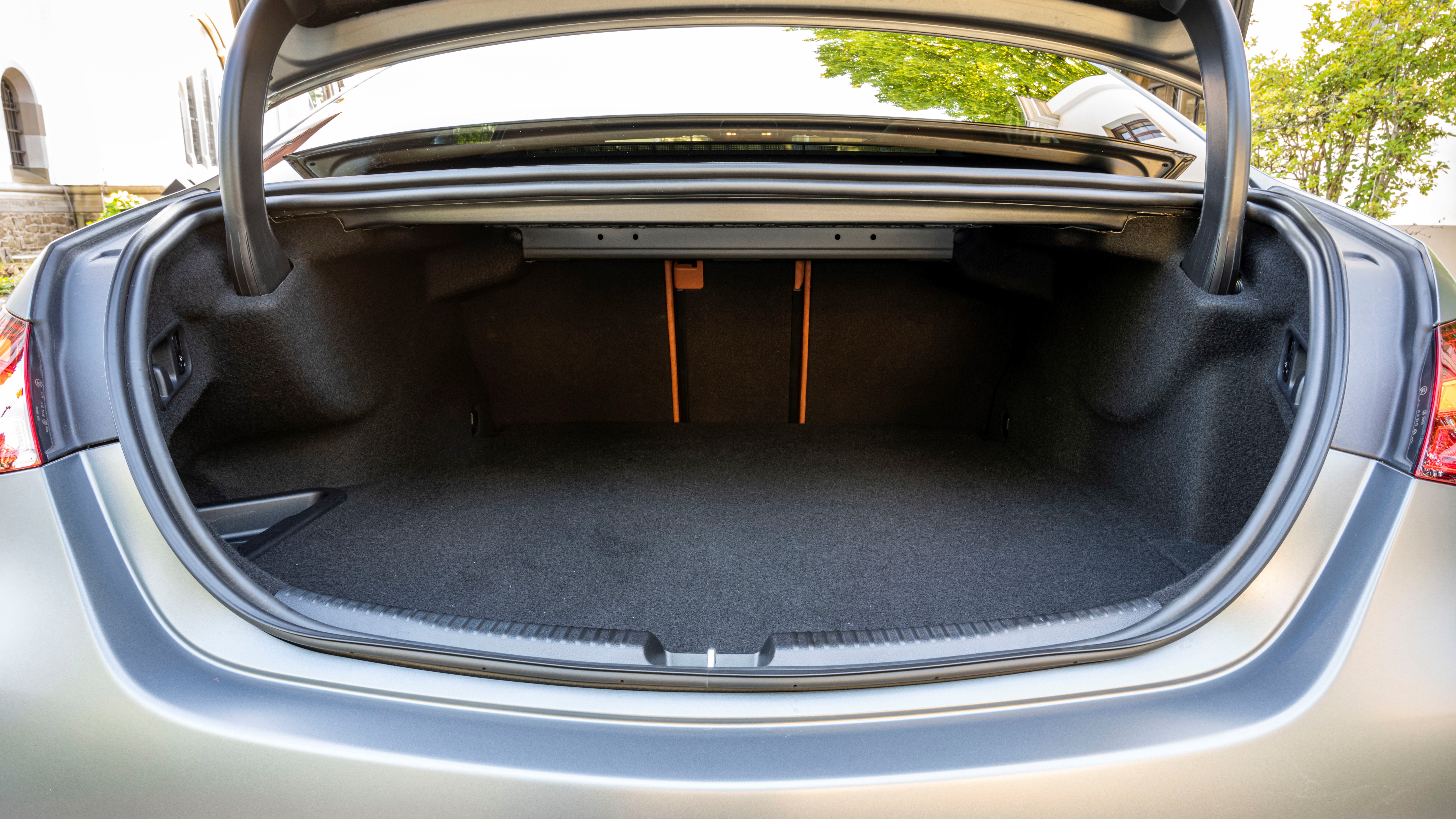 Is that the new C-Class?

It's not just a tidied-up version of the old one, even though it looks that way. Yes folks this is the all-new C-Class. The restyle might be cautious (it really is a new skin, not just a facelift) but inside it's all about a big bold screen interface, as per the S-Class.

And there's more. The plug-in hybrid, called C 300 e, now has enough battery to take it about 60 miles electrically. And recharge fast. That's a bit of a game-changer, as I'll explain in a minute.

Quite so. Here in the UK you can't quite get it ATM. Still, we did drive this one in Britain on our very three-dimensional road surfaces.

Our previous experience of the new C has been in Germany, driving examples fitted with optional adaptive suspension and four-wheel steering, neither of which will be available in the UK.

Now though, this German C 300 e is pretty much the same as a British one will be. It has air springs at the rear and coils at the front (non-plug cars will be all-coils) and the dampers aren't electronic and the steering is done by just the usual two wheels.

But if you want to know about the other engines, and the cabin, click on our main saloon and estate reviews.

So why is this PHEV such a big deal?

It has 25.4kWh of battery. That's more than an original Nissan Leaf, and those drivers didn't have an engine to fall back on.

This is enough for a 60-mile electric range, powering a 129bhp electric motor. If they resist accelerating like their pants are on fire, most folk could perfectly well do most of their daily driving without needing the engine.

Things get even better when the electrons and the explosions work together in hybrid mode. Tap a destination into the satnav and the car works out when best to use which of them – basically the motor for the slower bits of the trip, and the engine for the motorway. And it knows where the downhills are, quelling the engine and regenerating the battery there. It aims to get you to the chequered-flag icon with the battery pretty much exhausted.

I got better than 80mpg (plus one battery charge) on a 100-mile trip around the Bedfordshire countryside including a substantial squirt down the M40.

Also – and this is still unusual for a PHEV – it can accept DC rapid charging. So on a long trip, you could stop for a quick bite with the car plugged into a 50kW post, replenish the battery in half an hour, and be on your way. That puts an end to the idea that in a PHEV, long journeys are basically all-petrol.

The battery's bulk eats a bit into the boot, raising its floor. But not so much as to prevent the simultaneous launch of the C 300e estate.

Could I bear to drive it?

Fair point. Lots of PHEVs, including Mercedes' own A250e and derivatives, are pretty clunky. Especially when you ask for big acceleration after a period of gentle engine-off cruising. This one is better.

Floor the accelerator and the electric motor has enough gumption to provide useful cover while the 2.0-litre engine wakes up and the transmission shifts down. Yes, there's still a pause, so you might want to give it a hint what you're about to do by nudging the minus paddle.

Outside that circumstance, things proceed smoothly. Quietly too. Mostly because the engine is mostly not being worked that hard. But at full bore you have a combined 312bhp on your side. It's a quick car when you want it to be.

Slowing down is more of an issue. I'm no engineer but I reckon this is because it tries so hard to regenerate while simultaneously changing down through the 9-speed transmission. (It's easier for pure EVs because they have just one gear.) You feel it especially approaching say a roundabout from 70mph: you keep constant pressure on the Merc's pedal and the retardation varies disconcertingly. But the same issue undermines things every time you touch the pedal.

Is it otherwise fun?

In true Mercedes style, most of the time it proceeds in an imperious way, keeping you remote from the gritty realities of the process. You issue instructions, it mutely obeys. And at times the damping on heaving roads gets foggy.

But if you really do lean on it in a bend, things seem to tauten up and it issues a bit of feedback. It's not a 3 Series or Giulia, and isn’t meant to be. It is, as mentioned, a Mercedes.

That also means it rides better than those sportier rivals do. Not as well as some Mercedes, mind. There's a bit of thump from the suspension, and tyre noise. These days, you wonder if Mercedes is putting all its effort into digitisation and letting slip what we call the fundamentals.

So, all the digital apps and active safety then?

Mercedes has a vast array of driver assist too, and on the motorway it works really well, especially as the HUD tells you what it's up to. I would say that this made me confident.

But it didn't because earlier, on a wide open A road at about 50mph it suddenly saw a phantom obstacle and briefly hit its brakes. Hard. There really was nothing there that I could see. Maybe it thought I was falling asleep or something. Anyway, glad the car behind wasn't following too close. Move along now, nothing to see.