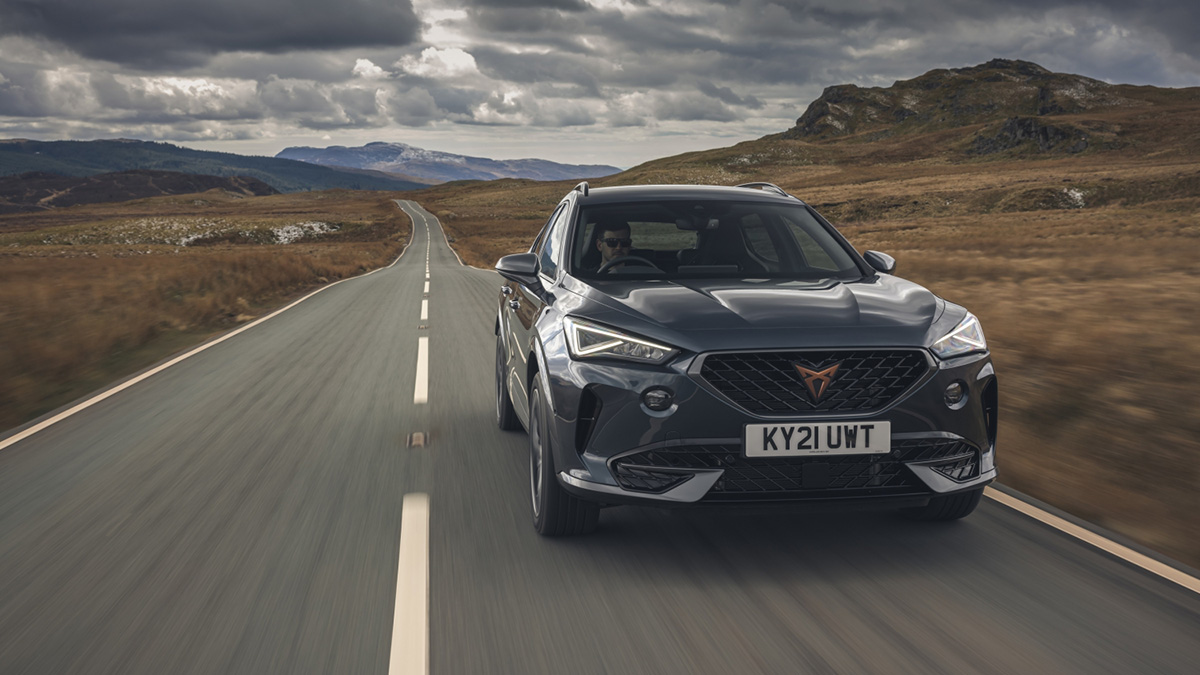 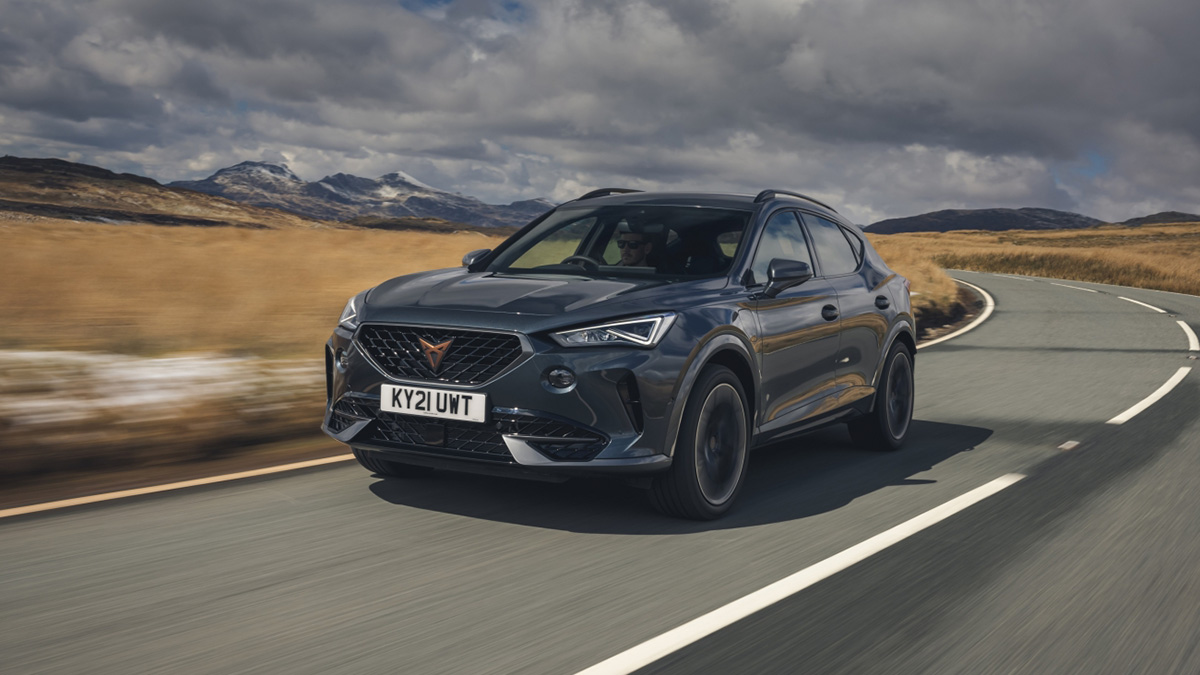 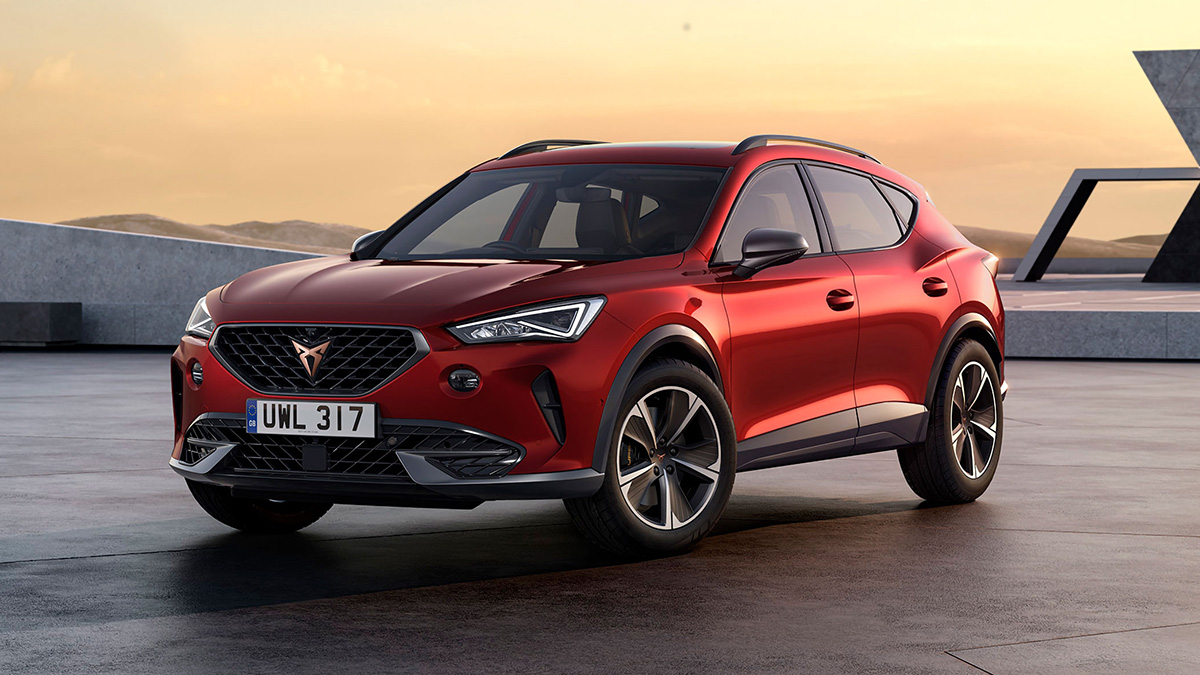 This is the new entry level Cupra Formentor – it’s definitely not a Seat, because this is the first standalone model for the posh-slash-sporty Iberian sub-brand. It’s also not that sporty, because this V1-spec car comes with the 148bhp 1.5-litre 4cyl petrol engine that you’ll find in a ream of cars across the Audi, Seat, Skoda and Volkswagen ranges. Here it means 0–62mph in a fairly stately 8.9secs and a 126mph top speed. On the plus side, it starts off the smorgasbord of available Formentors at £27,395. The full-fat 306bhp VZ Edition range-topper will set you back £43,840 for its 4.9secs 62mph run, so that’s something to think about.

But what’s the Formentor actually for?

It’s a headscratcher. Indeed, onlookers have struggled for a little while now to put their finger on what exactly the Cupra brand is for – the Ateca and Leon models go along with its previous existence as a swanky trim, while the arrival of the Formentor signalled Seat’s hope that its premium sub-brand would have the chops to stand on its own. In fact the car “encapsulates the essence of the brand", according to the company’s CEO. So this should be easy then.

We’ve driven the fire-breathing version, but models like this 1.5-litre V1 demonstrate the determination for Cupra to be a fully fleshed out badge with a solid range of cars available. But then, if they’re not all sporty there needs to be something else underpinning the brand… and it’s not like the Volkswagen Group needs another dynamic, slightly upmarket outfit on the books, is it?

Most SUVs end up being described as cars on stilts, but the Formentor feels like an SUV that’s had something chopped out of it. The firm calls it a coupe crossover, so you know that it’s not standard SUV fare, but you don’t realise how low down you are until you find yourself looking up at another driver in an apparent rival. This has a knock-on benefit for handling, which is sharp and ensures the car feels nimble around town and on a country lane.

The ride is impressive too, with a smoothness that shows up the myth that you need vertebra-crumbling suspension if a car is to have dynamic pretensions. It could be a mistake, mind, this is only the entry level car.

That smoothness also bodes well for motorway driving, which has a maturity and stability you wouldn’t necessarily find in an equivalent hatch. And even this bargain bin Formentor comes with trick economy settings like cylinder shut-off, stop-start and the like.

It’s a Cupra though, so it wants you to know that it’s relentlessly sporty and ready for action – the DSG-equipped 1.5 car skips off the line every time. It’s difficult to nail a smooth departure, so you and whoever else is onboard end up looking like a set of nodding dogs.

The engine sounds promising on idle, with a gruff burble that quickly turns into a thrash under revs. It’s not the soundtrack to the drive of your life – while the top-spec Formentor aims to rival hot hatches like the Golf R, this V1 model barely qualifies as tepid. We did get 40mpg or so out of it, which is nice, but such sensible thinking is unbefitting of the copper badge. It definitely feels like a car that’s had performance taken out, rather than something with potential that deserves more thrown at it.

Two things we didn’t like – the steering is curiously wobbly around the straight ahead, but firms up as you turn, making the initially movement feel a bit uncertain. Second is the fact that the curve of the bonnet peaks close to the driver, which makes the front end hard to place. No front parking sensors on this entry model…

Where are all the buttons?

It’s a very good question – of all the many complaints we might have about day-to-day motoring life, the constant grind of being forced to press things has never been top of the list. Or even the top 10.

We don’t want to be Luddites about the whole thing – if changing the way things are done means that things get done better then marvellous, bring on the tech. Sadly, Volkswagen’s glorious vision of a buttonless future is not the rollicking revolution they perhaps thought during the many planning meetings at Wolfsburg HQ.

So too in the Formentor – the ‘floating’ 12in touchscreen lags, was under-sensitive to our grizzled digits and basic functions lay hidden behind layers of sub-menus.

There’s voice control, if you want to avoid having to touch anything (very sensible these days). Of course, to avoid pressing anything you have to say “hola hola” to activate the system. There's also a steering wheel button that tells the car you’ve got something important to say.

Do I want the poverty spec model?

Actually, you’re not missing out too much in this car, it’s still pretty well specced – there’s wireless Apple CarPlay/Android Auto and phone charging, you get fancy 18in alloys, auto wipers, rear parking sensors, three-zone climate control, keyless go, adaptive cruise and a raft of safety features. No one goes home empty handed here, it’ll just take you longer to get there.

It could be because the touchscreen has taken all the buttons, but the Formentor is really channelling that Marie Kondo minimalism. The stubby gear tab is familiar from other VW Group products and immediately moves the cabin up a notch, but there’s not much else to play with in here. One good thing about the touchscreen’s newfound importance is the disappearance of the rows of blanked off buttons that remind you you’re in an entry level car.

Spend some time with a Formentor and it becomes apparent that it’s essentially aimed at people who aren’t ready to admit they want an SUV. But where do you go when your life wants more from you than an Ibiza hatch? Seat has tried to create something for those ageing scamps who are looking to trade in their sangria for something a little richer and fuller bodied.

Looking at the monthly contract cost, this 1.5-litre V1 with DSG will you set you back around £400, upgrading to a 2.0-litre engine means £420, the plug-in version closer to £490 and the raging 306bhp car takes you over £500 a month. Just bear in mind that even the top-spec Seat Ateca (the Formentor’s closest genetic match) just scrapes over £400 a month on a monthly contract.

There are better, more sensible SUVs out there – and you don’t have to look further than your Seat or Skoda dealership – but none that offer the same grown up, dark-chocolate-on-a-Friday-evening, cheeky red sort of fun that’ll allow you to channel your vaguely misspent youth in the safest possible way. Go crazy, get all the power you can afford.