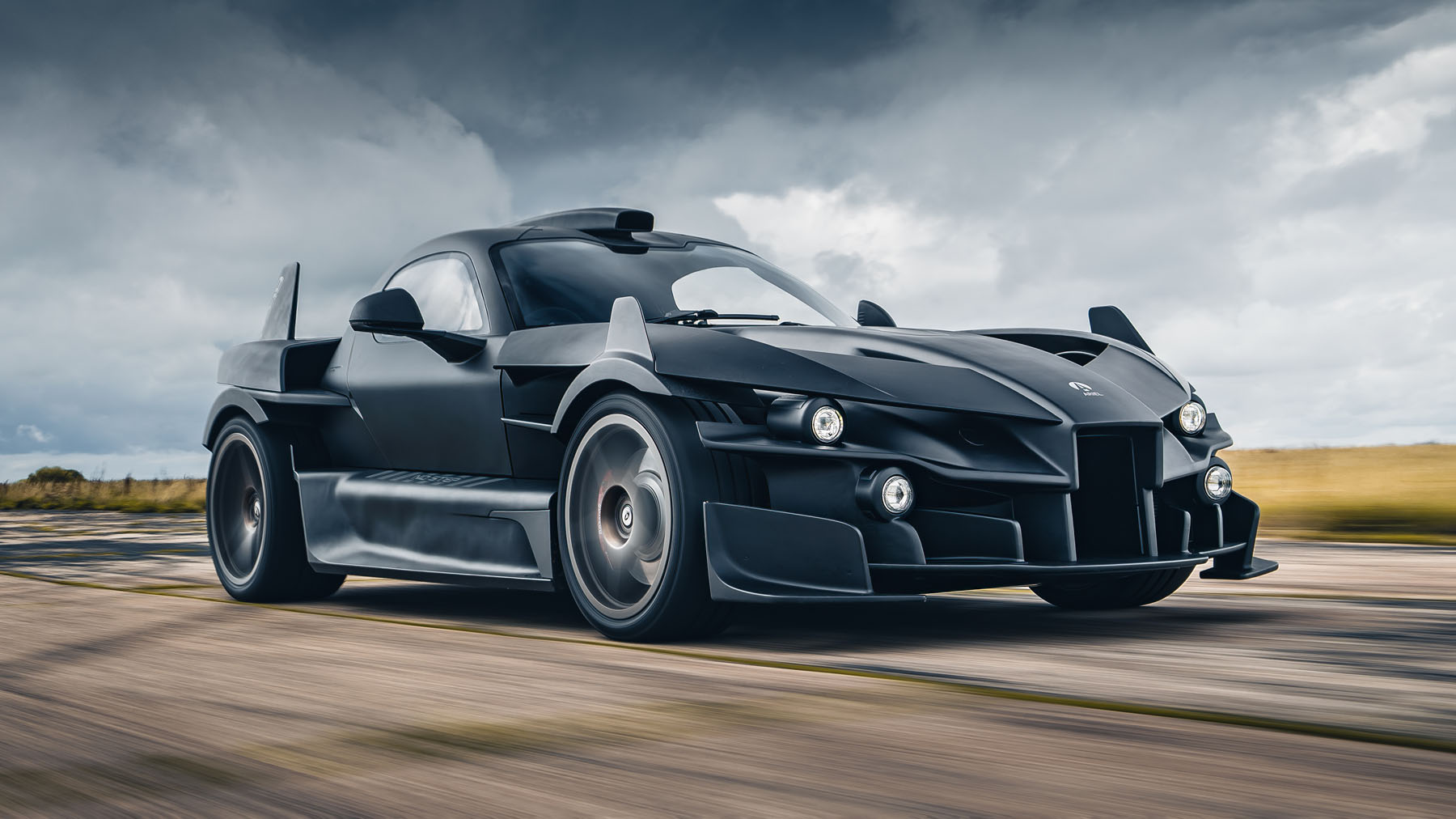 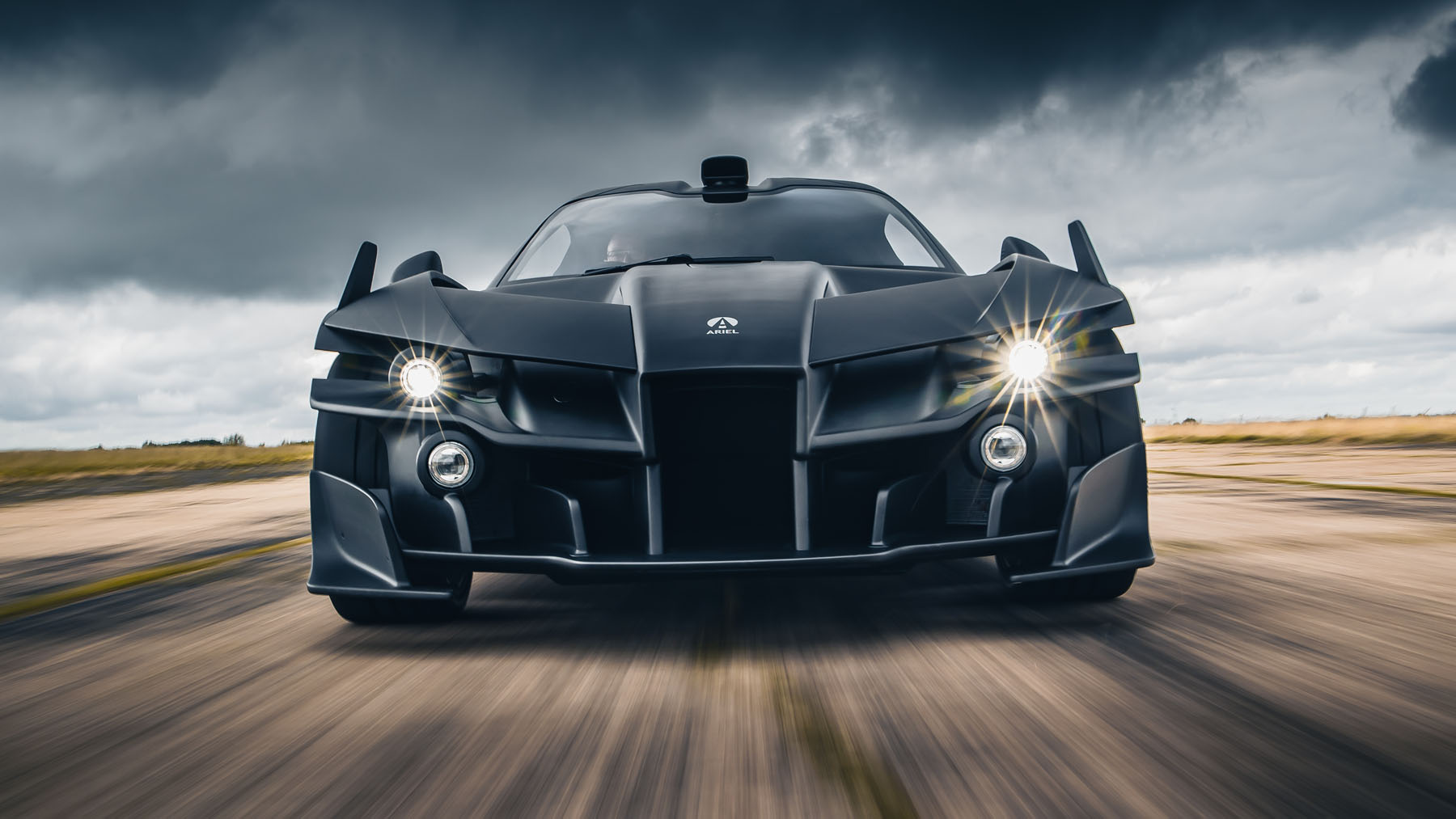 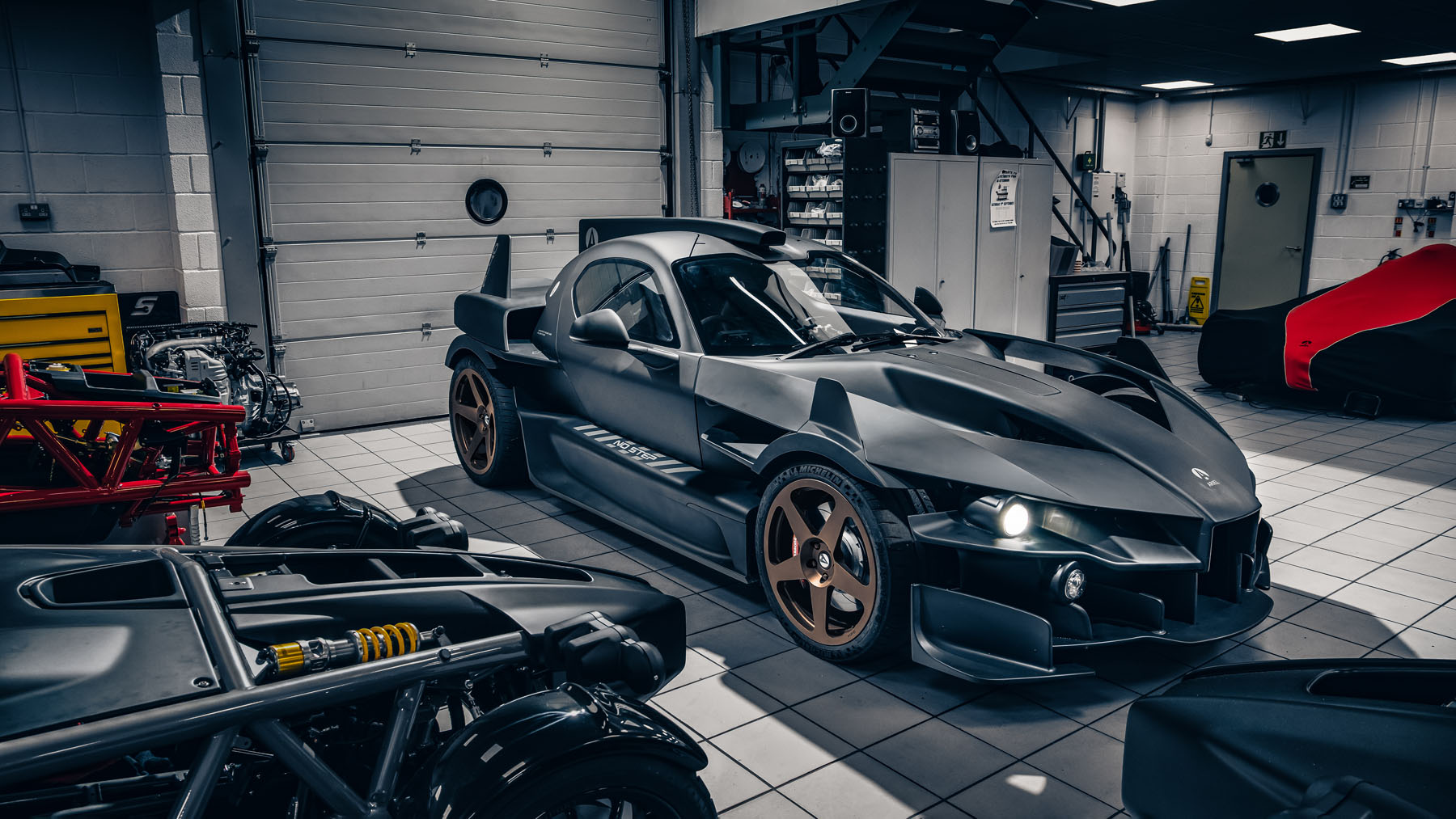 3…2…1…G… a whining yowl, sudden hiss and zizz from the tyres, smoke pours up through the emptiness where a bonnet should be, the world warps, my vision jars – I blame the surface – then the car stutters, hiccups and kangaroos. Welcome to life onboard what will be one of the world’s fastest cars.

Just not yet. Dropping battery voltage stops play. What you’re looking at is a prototype of Ariel’s Hipercar – the name will change, but the philosophy won’t. 1,200bhp from four electric motors, under two seconds to 60mph, 100mph in four. Rimac-beating stuff. Exotica from Somerset. And we haven’t even got to the best bit yet, because this small company is proving more original and inventive than any major player.

Yes, early plans to include McMurtry-style ground effect were ditched, but when this goes on sale – likely in around two years time – it will be the first production car to feature a jet engine. That’s the exhaust on the back deck. Where it says Danger. All 47bhp of it.

Ariel first announced work on this project five years ago (yeah, it was that far back, but as we’ve seen no-one is exempt from expanding timescales where hypercars are concerned), so a recap is in order: the jet turbine is a range extender – it exists to charge the 56kWh battery, not drive the wheels. “We’ve done endless simulations and no matter how hard you drive on road, the range extender can keep up, maintain battery charge,” Ariel’s director Simon Saunders tells TG. “It’s also extremely efficient: there’s only one moving part and emissions are negligible. It’s fuelled by petrol at the moment, but the long term plan is to switch to hydrogen.”

Shouldn't it be called the Ariel 'Hypercar'?

Nope, the spelling isn’t wrong, Ariel is merely using the word differently, a contraction of ‘High Performance Carbon Reduction’. So 'Hipercar'. Carbon emissions rather than carbon fibre. There’s a lot of the latter about, although underneath the chassis is aluminium and most of the body sections are weighty 3D-printed test panels. It’s 1,759kg as it sits here, but Saunders is confident of dropping that below 1,500kg with full carbon panels and carbon wheels. “Obviously we’re a lightweight car company,” he says, gesturing at the Atoms in the build bays behind, “so it’s important to be the lightest we can be, lighter than others. So we haven’t got a huge battery pack, and we’re looking to save weight everywhere we can. Obviously the interior is barely done at the moment, but the feel we’re going for is ‘plush Le Mans’.”

I climb in, sitting higher than I expect (the battery pack is underneath the floor). “We’re not convinced by touchscreens,” Saunders continues, “they’re awkward to use on the move, so we’ve done away with them completely.” Buttons on the roof control most functions, from gear selection to mirror position, plus the door catches.

Ariel’s first ever door. It sounds like nothing, doesn’t it? But ask anyone in the industry what the most challenging element of car engineering is and the answer is always the same: the door. “We’ve been through hundreds of designs to get here – it’s not just ensuring the whole structure is stiff enough so the door doesn’t rattle, it’s the sealing, the sound-proofing, the rain management, the quality feel… everything.” The result is typically brilliant: neatly placed hinges, electric latch and release, a crisp sound when it closes. Sliding windows will be added later.

It's a weird looking thing though. I get a proper sense of that at the airfield Ariel is using for shakedown work (shake being the operative word given the crumbling surface). The proportions are oddly skewed, the flat, slatted, punctured nose giving way to a more bulbous, enclosed, club-like rear. Pretty it ain’t, aggressive it most certainly is, a car that looks like a threat. 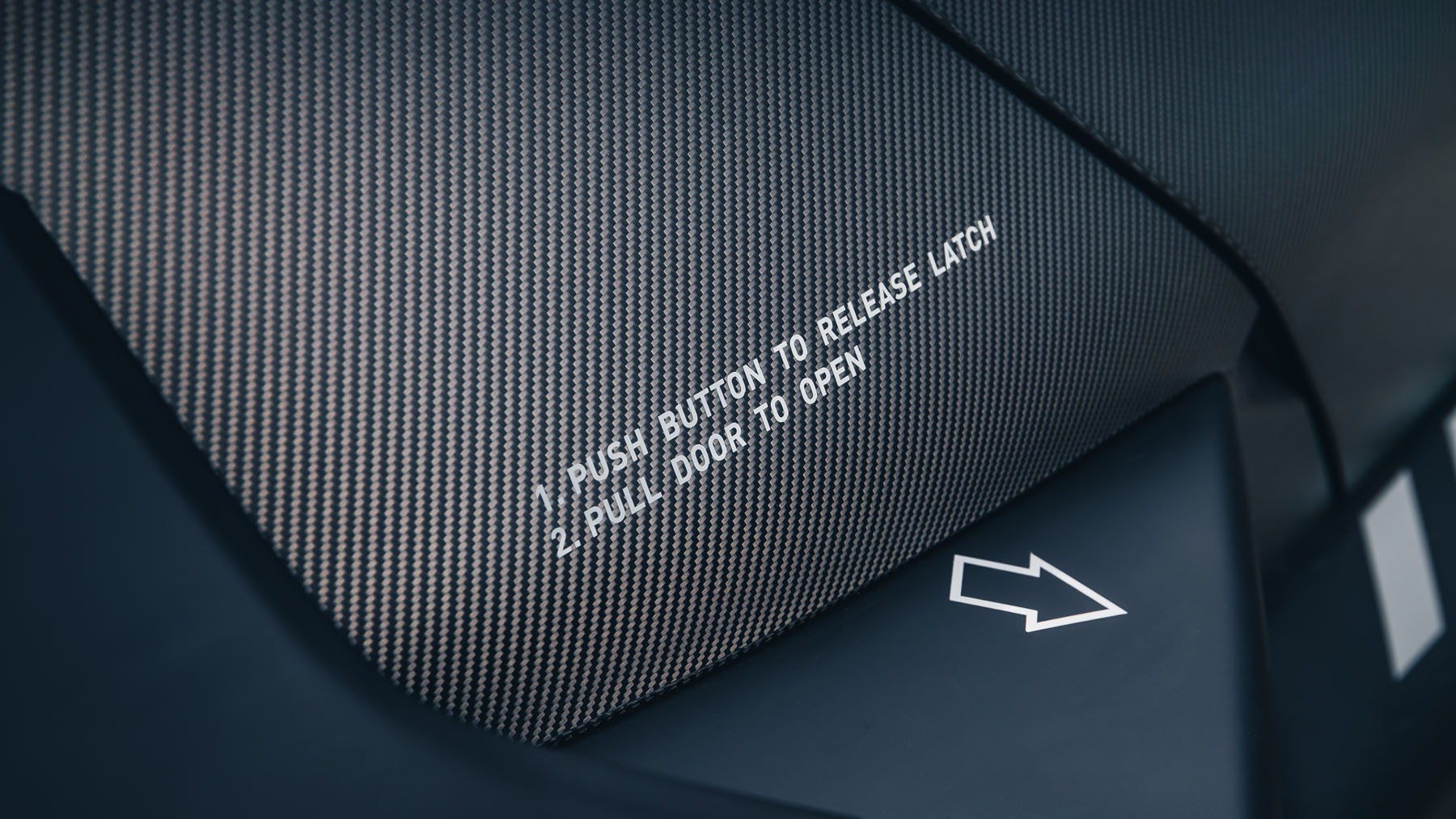 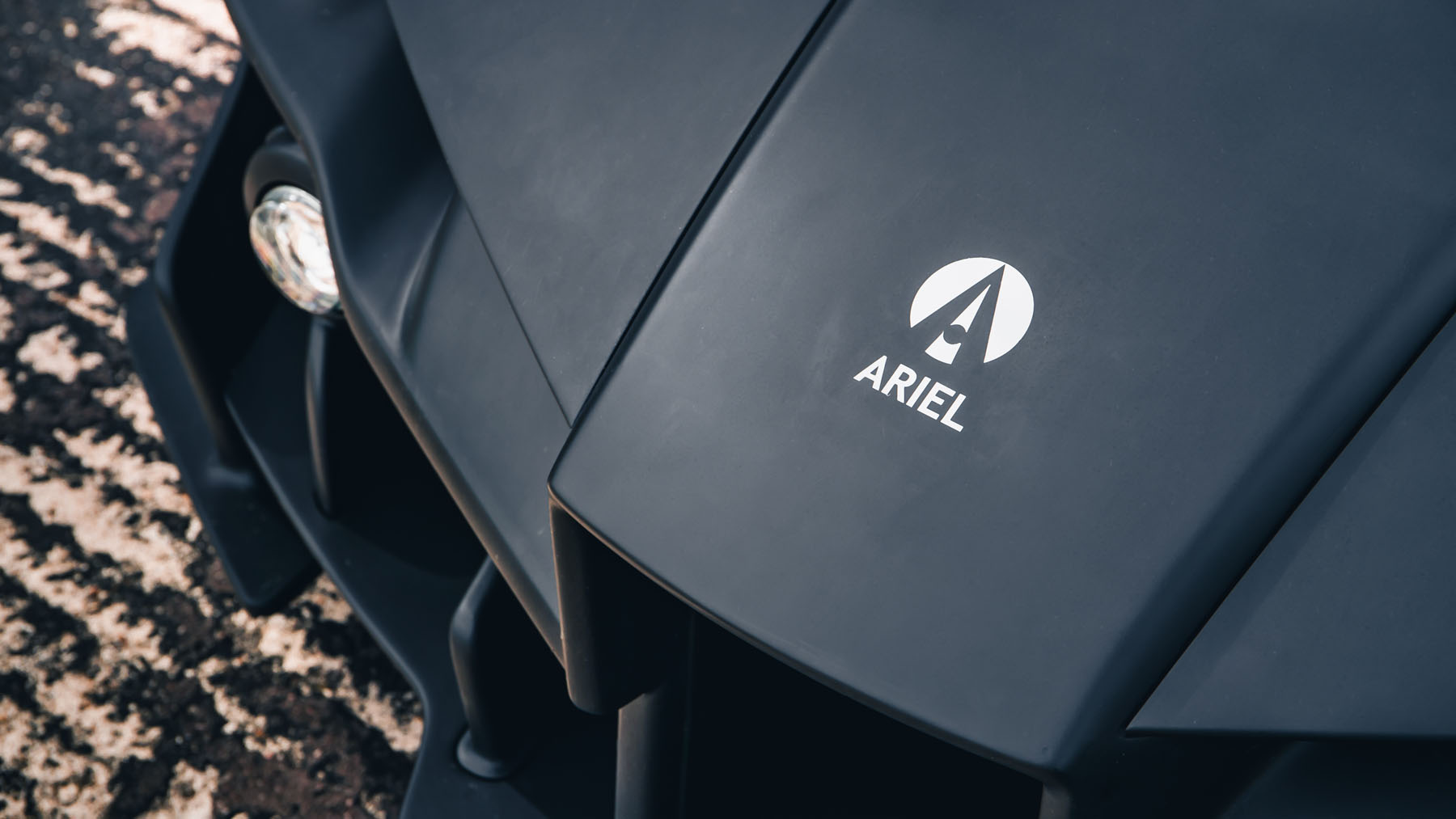 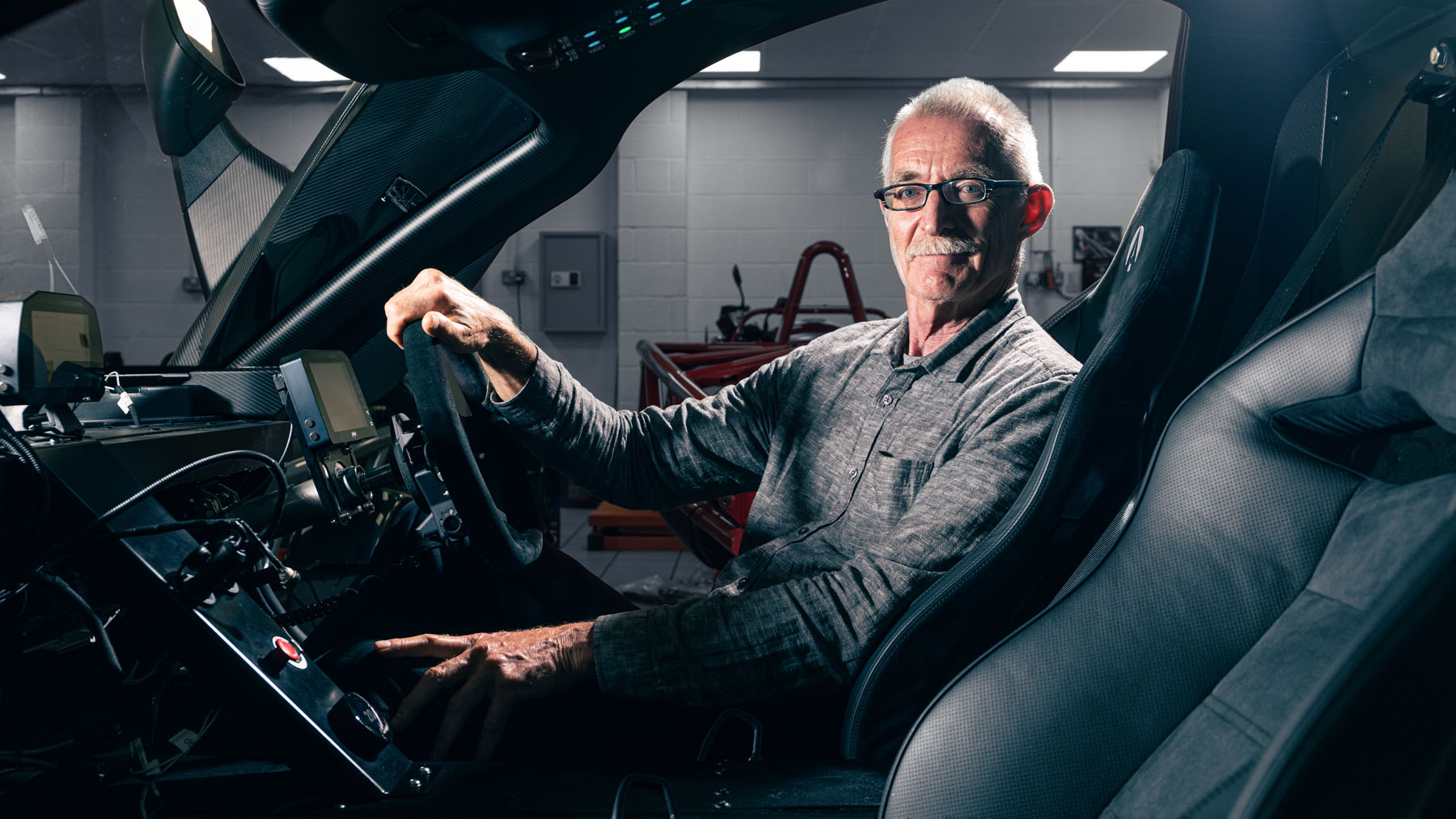 No dispute there. How big is it?

At 1,354mm it’s over 200mm taller than, say, a Lotus Evija, which – misleadingly – makes it appear narrow. It’s a squat, purposeful device with the face of a transformer, Batman ear fins, Top Gun graphics and Bane vibes. Expect Hollywood to come knocking very soon (obviously Fast and Furious will add a V8 soundtrack). Those fins all serve a purpose, the rears for stability, the fronts breaking up the airflow so it passes more easily over the mirrors, reducing drag.

The intake on the roof is for the jet (which unfortunately isn’t working today), openings everywhere are for cooling. The Hipercar needs a lot of that – there are eight separate cooling systems. The plan is for the fans on the back to remain on display.

It's surprisingly uncrude to drive for a prototype. As yet literally no development work has been done on the steering, suspension or brakes. All focus has been on the motors. Ariel is another firm that has found out just how complex electronic systems are – at the moment when charge runs down, something is causing the motors to stutter. But when there’s charge in the battery…

There will be four driving modes: Eco, Sport, Serious and Fun. Kind of do what they suggest, with Serious for steely-eyed lap times, Fun with more rear power bias for sliding about. It feels commendably together for a prototype, steers naturally, brakes evenly – they’re experimenting with brake regen at the moment, but the plan is to be able to switch it off for track use so pedal feel and power is consistent. The one thing I can get a feel for is straight line shove. The throttle is long travel and currently there’s no launch mode and the traction control is blunt. But you can switch it off, at which point…

The car it most reminds me of is VW’s ID.R, the car that still holds the all-comers record at Pikes Peak and lapped the ‘Ring in 6mins 05secs. That’s the level of accelerative violence here, although at the moment the Hipercar is softer off the line, the motors ramping more gently. The full hit happens from 60mph onwards, once wheelspin is under control.

The price is equally shocking. Available as either 2WD or 4WD, with or without the jet turbine, full house versions are likely to be knocking on the door of seven figures. That’s a complete sea change for Ariel, for a car without classic hypercar elegance. But this is new tech, new age, new customer base. It’s something totally different, something wild and outrageous, the essence of Ariel in electric form.