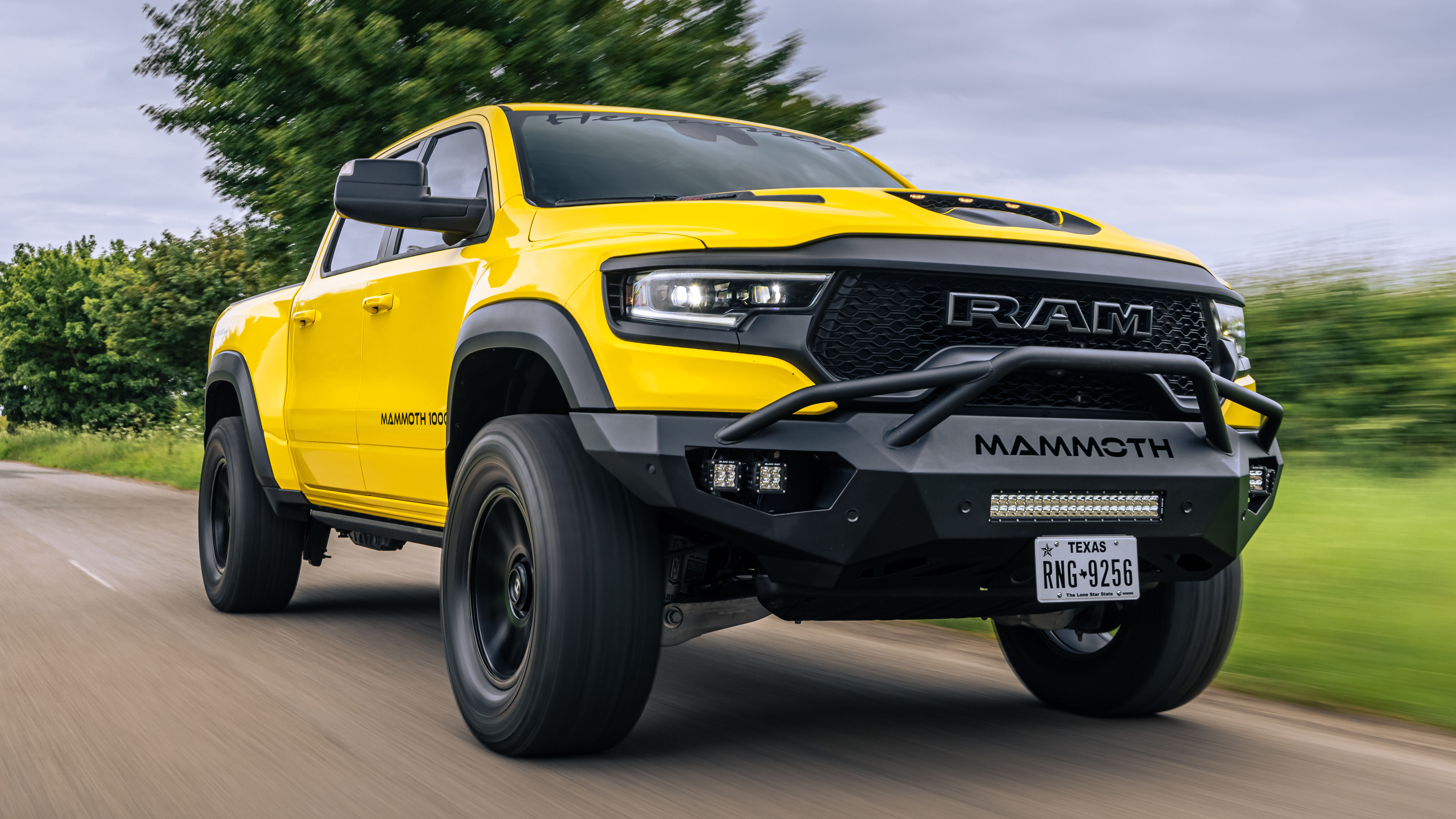 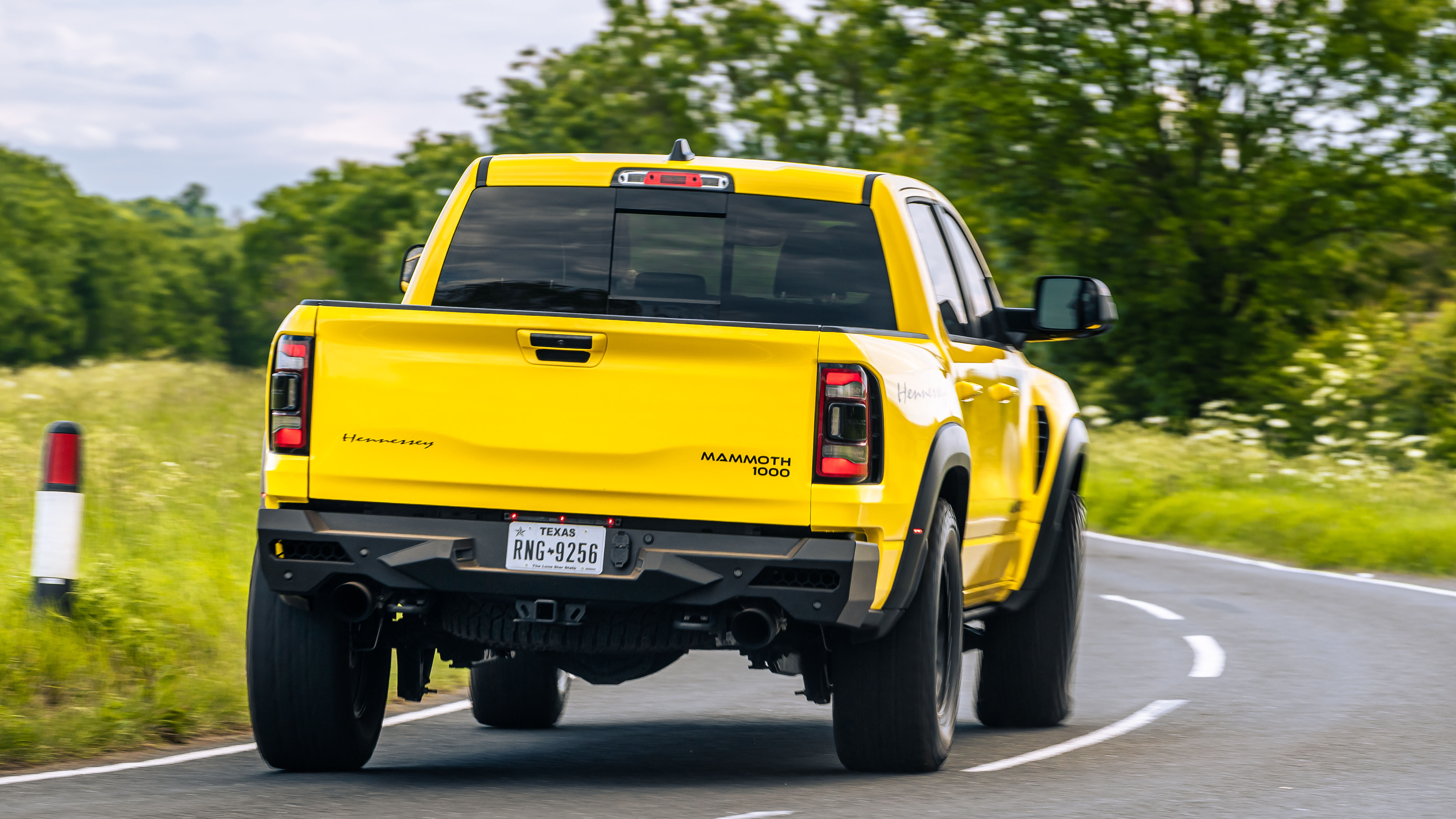 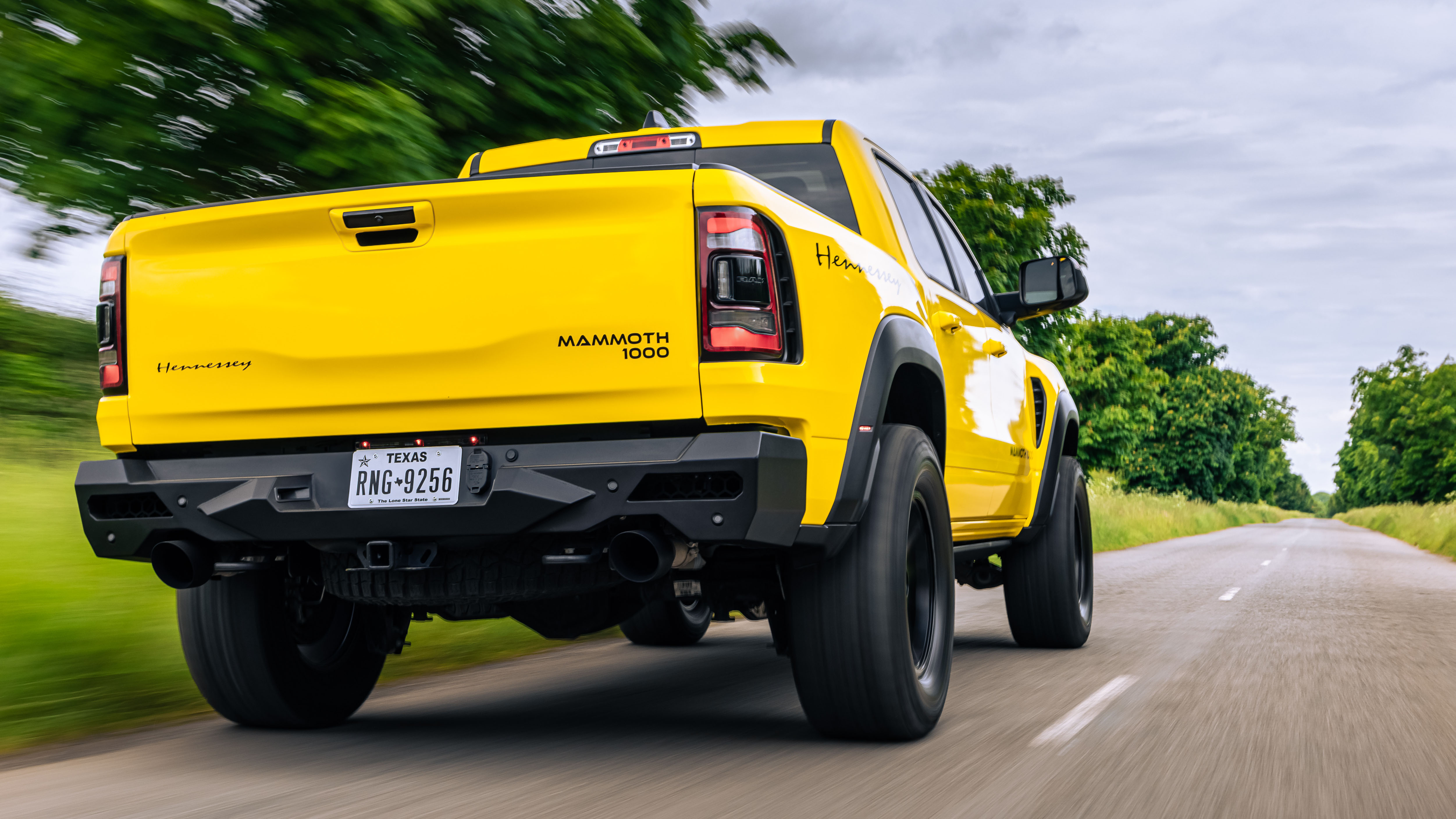 You wouldn’t lose that in a car park…

It’s unlikely the mighty Hennessey Mammoth 1000 TRX would have fitted into the town, let alone the car park. This isn’t a car, it’s a neighbourhood. And the sheer size of the 3,000kg Mammoth is only one of the many outrageous attributes it can boast.

I’m guessing all the numbers are huge?

All except the miles per gallon, yep. And that’s thanks to an engine that would seem over-specified if it were to spend its life powering an aircraft carrier. But of course the Americans have decided to pop it in a pick-up truck with five heated and cooled seats.

It’s from the same family of supercharged 6.2-litre V8s that Dodge puts in the Challenger Hellcat. And that makes perfect sense, given the Mammoth starts out in life as a Dodge Ram TRX – the flagship truck in the company’s range and challenger to the Ford Raptor. It develops 702bhp and 650lb ft, and gets the Ram from 0-60mph in just 4.5 seconds – anywhere.

Underneath you get something called – wonderfully – Bilstein Blackhawk suspension, which has up to 14 inches of travel and several modes designed to conquer mud, sand, rocks, and the Baja rally. You also get Apple CarPlay, towing assist, hugely comfortable leather seats and cruise control. The rear window slides open to help you aim a gun out the back. What more could you want?

You guessed it. 200 Ram TRXs will find their way from the Michigan factory to the workshop of John Hennessy in Texas. There, they’re treated to a gnarly off-road bumper kit, some stickers, new spark plugs and a beefier new 2.4-litre supercharger. Then the fuel flow system will be boosted to fire hose pressure, and the ECU gets a yee-haa coding. And the result is something laugh-out-loud ridiculous.

Converted to Hennessey Mammoth 1000 spec, your TRX now develops 950lb ft of torque and a claimed 1,012bhp. That makes it the most powerful new street-legal truck in the world, says Hennessey. And because it’ll now do 0-60mph in under 3.5 seconds, it’s also the fastest.

To an American who goes powerboating, shooting and extreme tattooing all in one afternoon, I imagine it feels quite amusing. But to a sheltered Englishman who thinks a Ford Fiesta ST is a bit fruity in a straight line, this thing’s off the scale. Just blipping the throttle when it’s paused at the lights rocks the body from side to side like some hellish mechanical cradle. 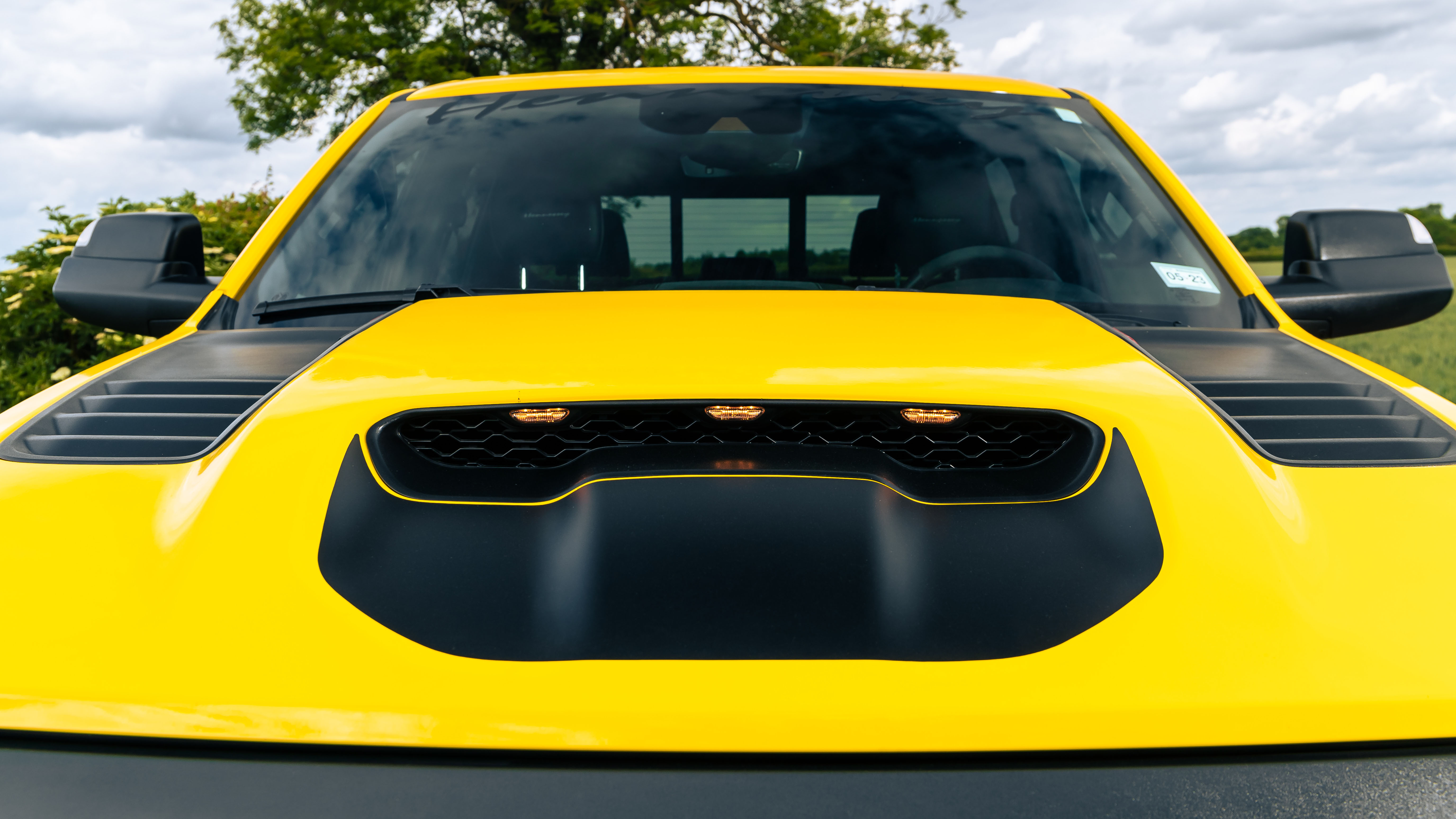 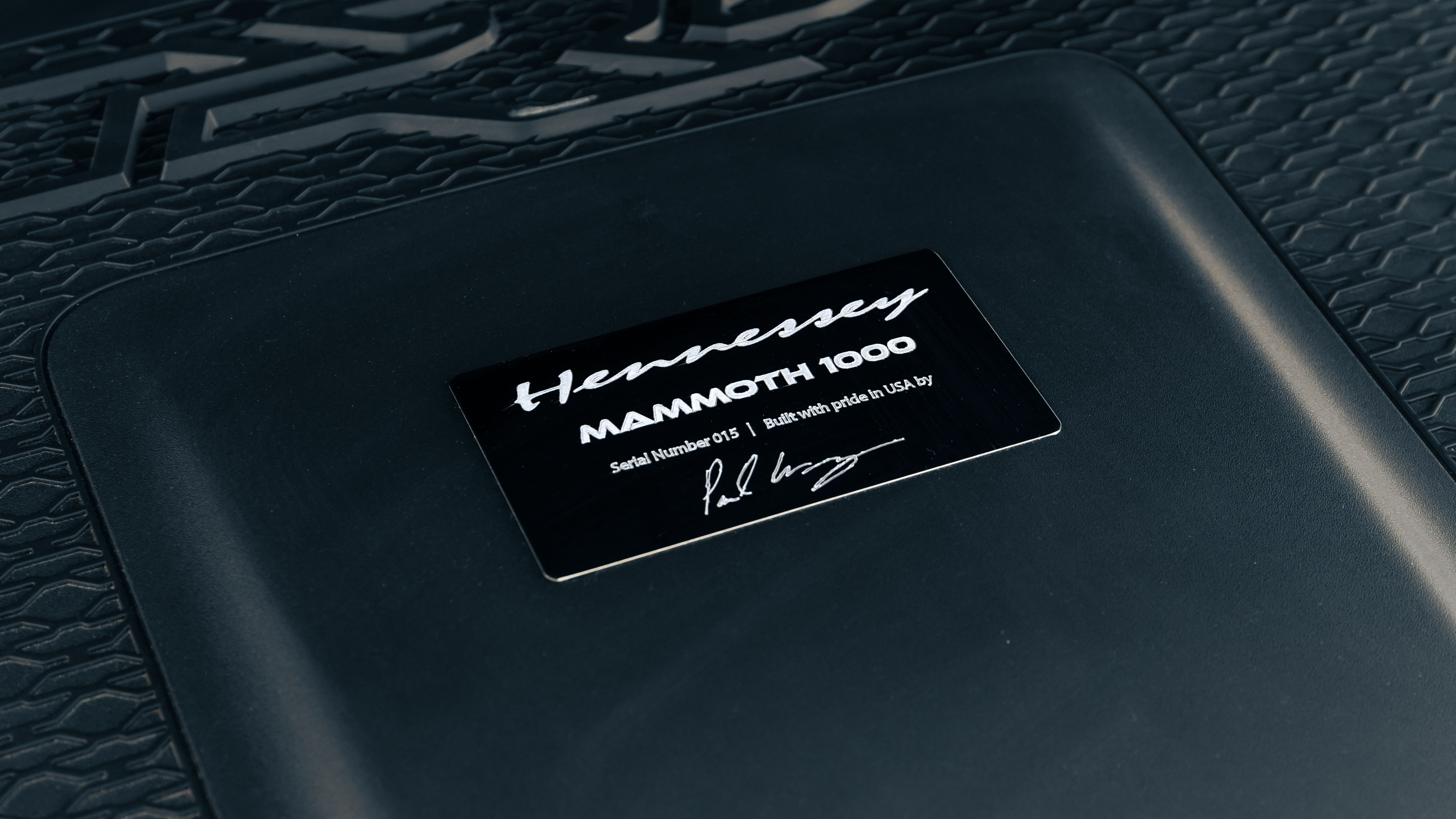 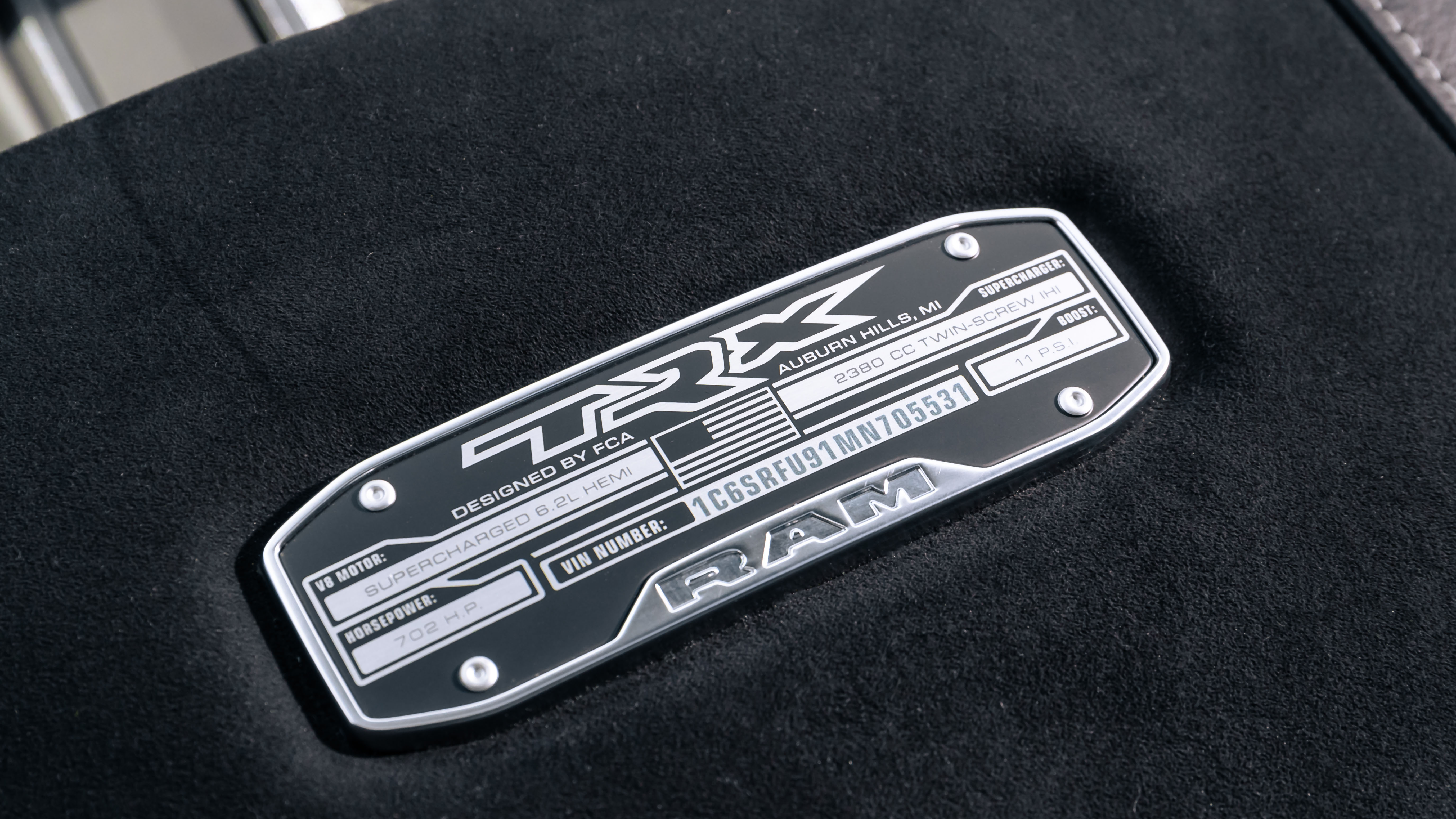 Then, when you find a piece of road that’s long, quiet and straight, and you press the drag strip Christmas tree ‘LAUNCH’ button, squeeze the brake pedal to the required pressure to hold the floored throttle at bay, and finally release the brake, the Mammoth hurls itself face-first through the glass ceiling of your expectations. It is savagely, titanically fast. It’s as if you’re at the controls of a secret military experiment that’s got out of control and should never have been made public to civilians.

We're not sure how many times the car would put up with full-bore starts, such is its ferocity. So, you have to savour the experience. Marvel at the eight-speed automatic gearbox dealing with the sort of torque used to start stalled freight trains in the Rocky Mountains. Wince as the nose rears up and you briefly make eye contact with the sun. Feel the steering go horribly light as the Mammoth squats down hard, leaving the front tyres dangerously close to clawing at fresh air. And all the while there’s this deafening argument going on under the bonnet – the shrieking supercharger whining over the bellowing engine. It’s dreadful and magnificent all at once.

Does it feel tough enough to survive a zombie apocalypse and WW3 all by itself?

Erm, no. We broke it quite easily. Boot the gas and every so often, you don’t get volcanic power and fury. You get a big bang and Limp Home Mode. Plus lots of pretty warning lights. And before we even drove the Mammoth it arrived weeping oil from underneath. So it had to go and be fixed on a tow truck which looked so overloaded we half expected it to snap clean in half when the stupid yellow Tyrannosaurus climbed aboard.

Having said that, the bodyshell didn’t creak, the interior trim doesn’t rattle and the gearbox’s slow, slurred shifts feel like welcome breaks in the mayhem, to allow you to take a deep breath and wipe your eyes before the supercharger brings the noise all over again. Those lazy changes are a good time to look down and notice you’re doing 6.7 miles to the gallon, and a full £180 tank will take you about 220 miles.

Not the ideal car for a cost of living crisis, then. Though you could weather the storm by selling your house and living in the Mammoth instead. It’s bigger than a first-time-buyer's flat and if you lob a hosepipe into the enormous bed you’ve got yourself a free Olympic swimming pool.

And how’s the handling?

How can we put this? Not the Mammoth’s speciality, corners. It prefers the straight bits in between them. The first problem is the brakes. They need to halt a road-going nuclear meltdown but are about as effective as sticking some chewing gum to an airport runway and hoping it slows down incoming jets. If anyone left Hennessey after bolting this beast together with that nagging 'I’ve forgotten something’ feeling, it was neglecting to upgrade the teeny discs.

Given how much heavy-duty engineering you’ve got to command, it’s amazing how lifeless the steering is. There’s hugely wobbly play in the rack and no sense it’s connected to anything that can change the general direction of travel. Then the differentials get tangled up and start stuttering and complaining as you barrel around the bend, and the whole thing feels like it’s trying to do the hopscotch wearing diving boots.

We're quite sure it’s a monster on a sand dune, but on a B-road, it’s flummoxed. Not that comfy either. The invincible civilian tank shudders and shimmies when asked to deal with a drain cover or a pothole. It’s like finding out the Incredible Hulk is afraid of spiders. 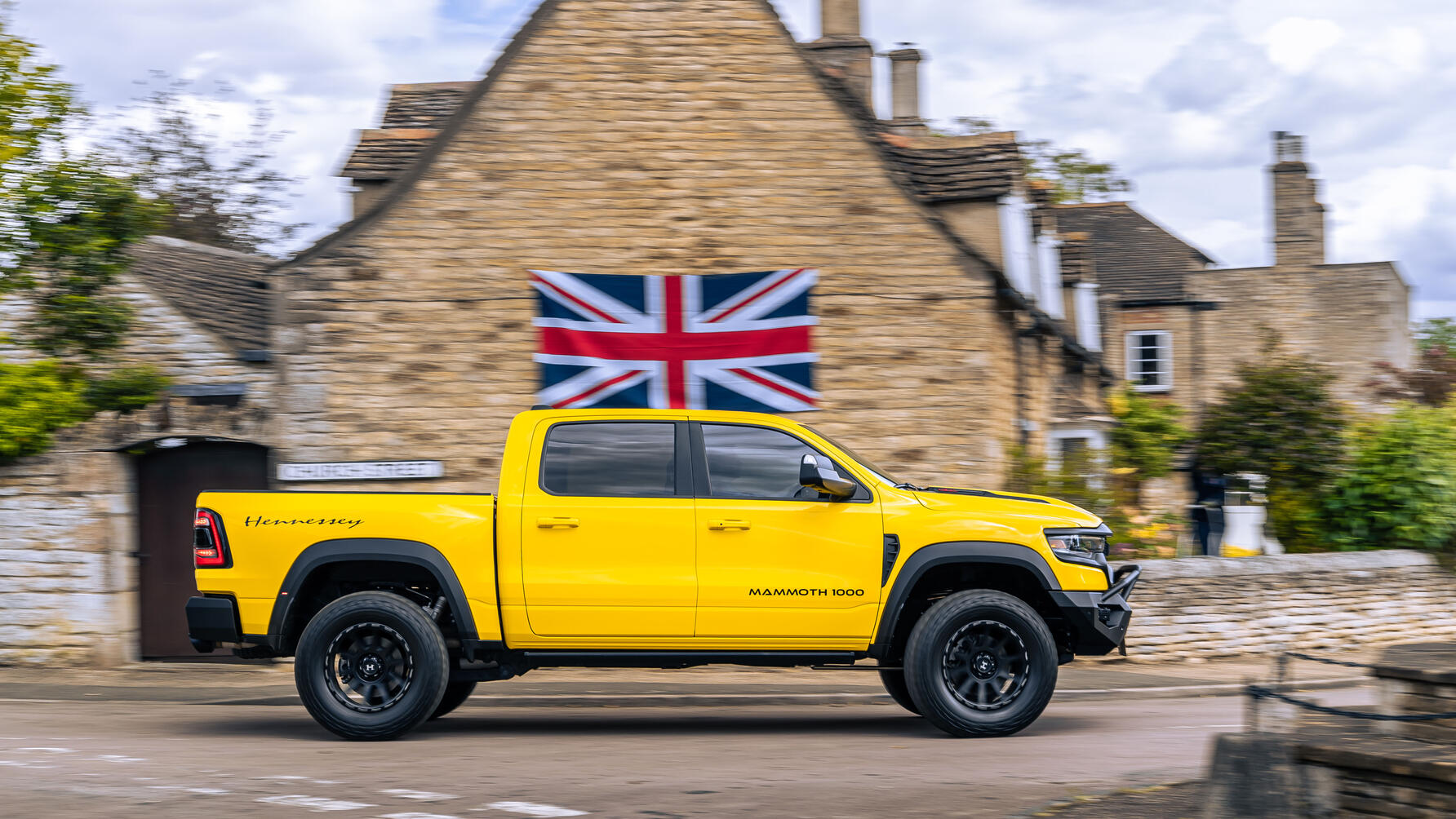 Without getting too philosophical here, yes – but so are all supercars, when you think about it. And this is a supercar. It has more power than a Bugatti Veyron or McLaren P1 and can outrun a Ferrari Roma. It turns heads, drops jaws, drinks fuel, makes noise, enraptures children, annoys the middle classes and it’s a pain in the bum to park. The whole machine is a victim of the engine’s success.

But it’s not the future of the big bad pick-up truck, is it?

Nope. Whether the faithful disciples like it or not, this scene is going battery-powered at a breakneck rate. Ford’s F-150 Lightning, Rivian’s R1T, the new Hummer EV and an all-electric Chevy Silverado have all beaten the fanciful Tesla Cybertruck to market, offering new packaging and clever storage solutions along with their mountainous wads of torque.

The $150,000 (about £122k, give or take) Mammoth is the last of a breed. The last of a species – fitting really, given it’s named after a giant lumbering animal that went extinct when it couldn’t adapt to a warming world. It’s utterly unjustifiable on every level, and in many ways, a rolling metaphor for America’s worst excesses.

But it’s also proof that for some, too much is never enough. The same spirit that made humans explorers and adventurers now has to be sated with this sort of nonsense. It’s a ‘why the hell not?’ kinda car. Which is why Hennessey will also do a six-wheeler conversion, we suppose.

It’s all the car you ever need… but more car than anyone could ever use.