£1385 p/m
External link to
with Leasing.com
Read why you can trust our independent reviews
Top Gear Team
Published: 29 Sep 2022
Skip 20 photos in the image carousel and continue reading 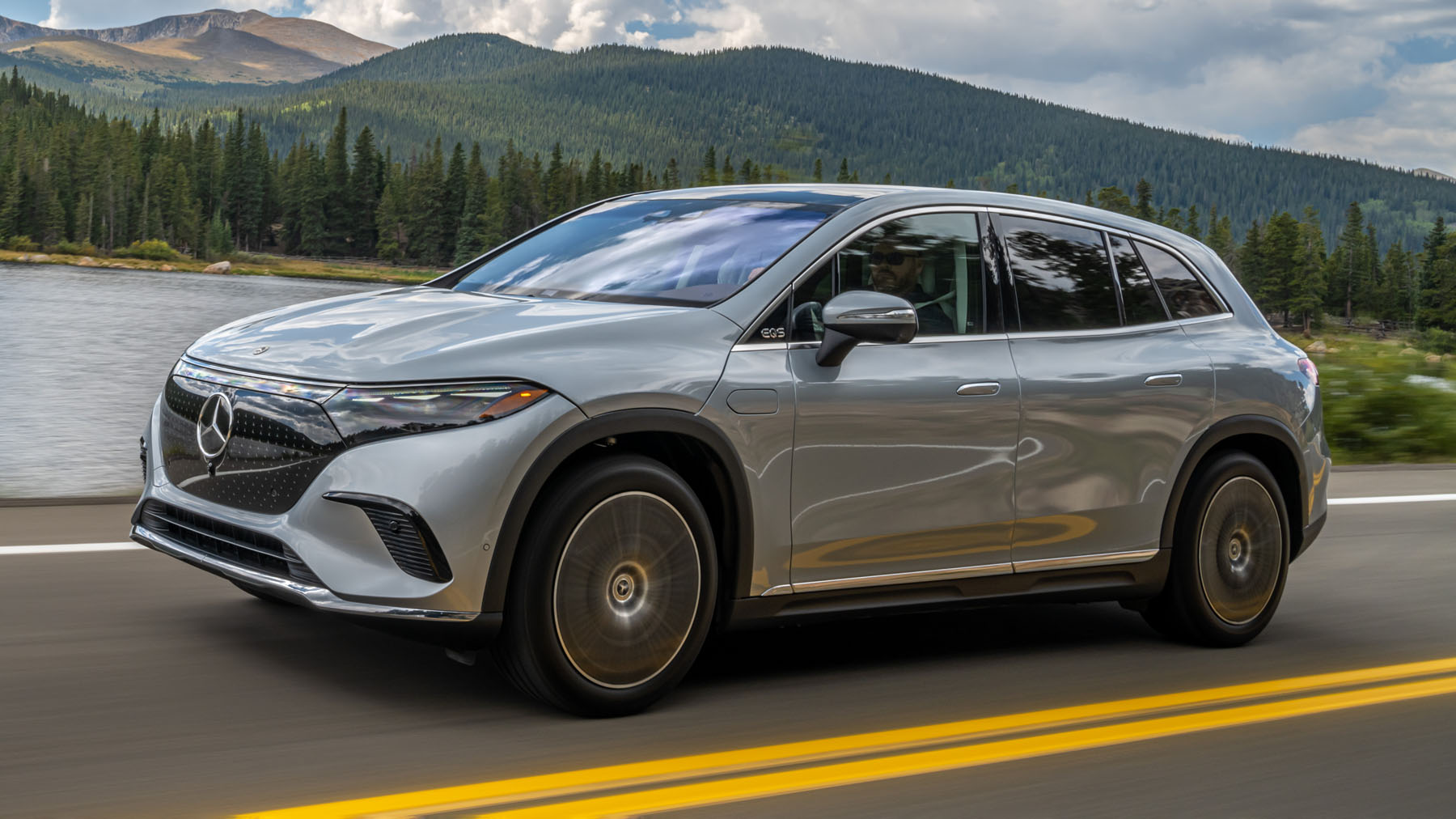 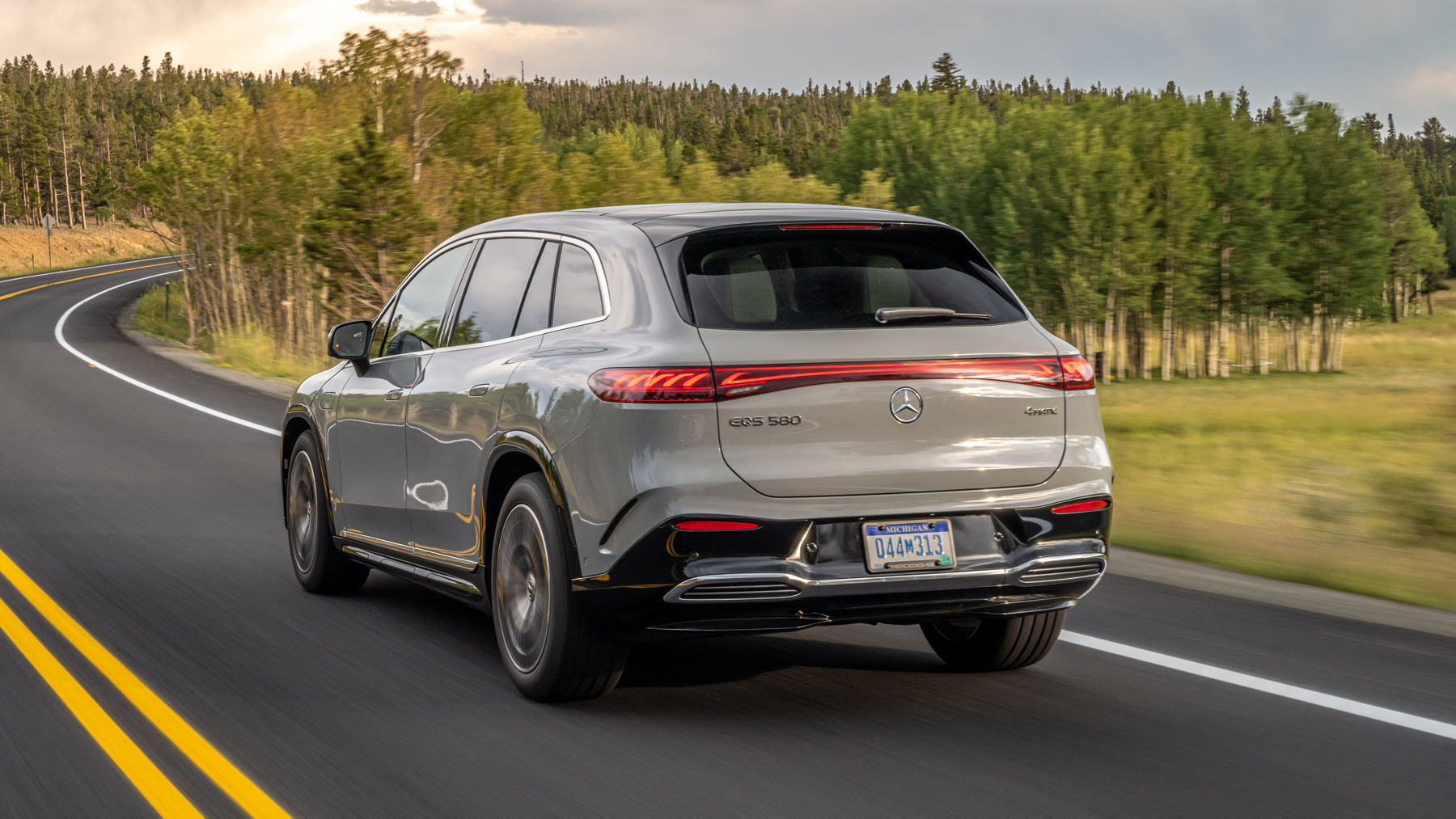 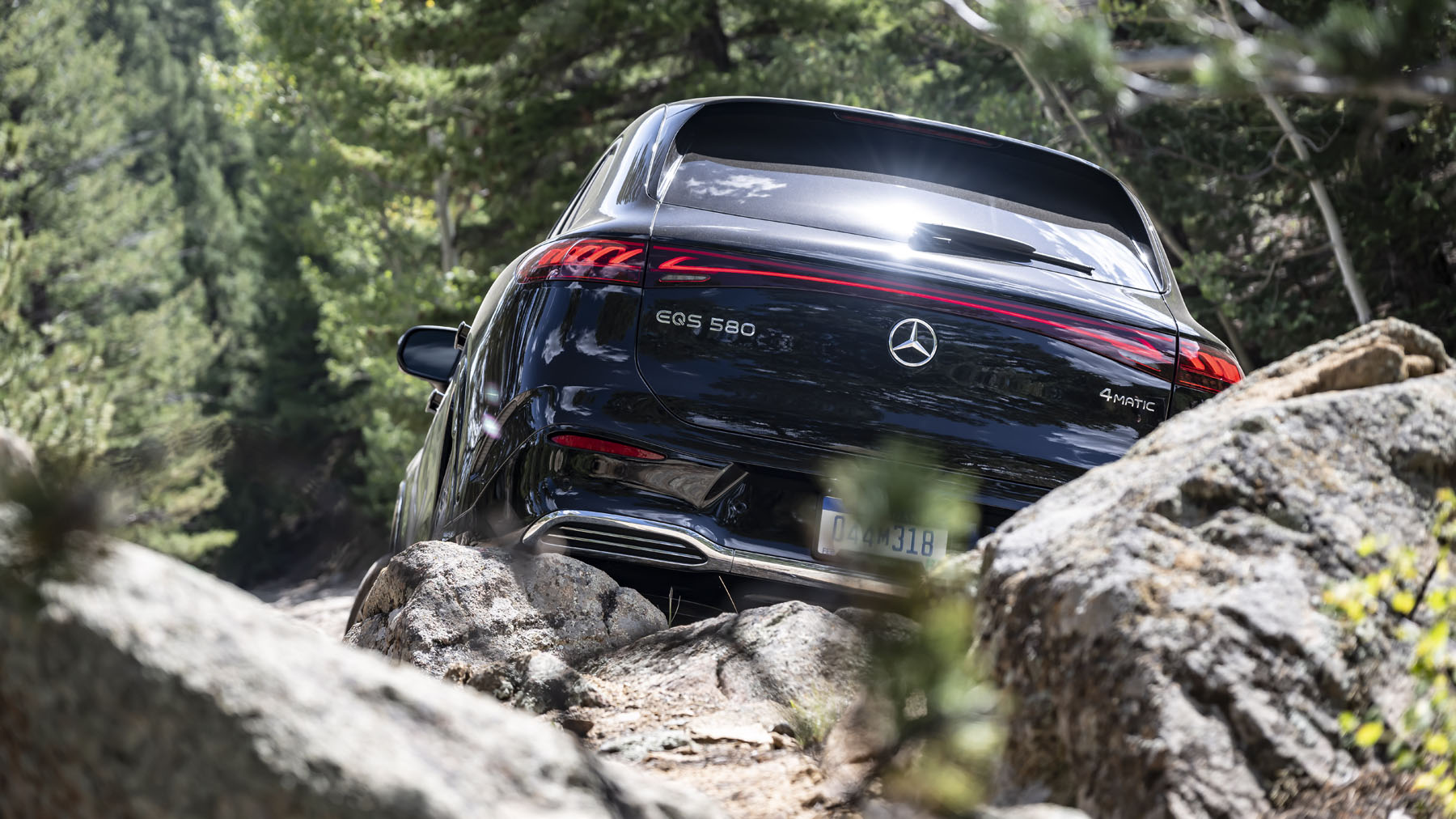 1 / 20
Advertisement
“Objectively speaking, the EQS SUV does it all but it lacks the character and supreme authority that makes the Range Rover such a lodestar ”

It’s expensive, it’s so smooth it’s almost not a car at all, it’s big and heavy

As the EQS relates to the regular stone-age S-Class, and the EQE to the E-Class, say hello to the EQS SUV: the first full-size off-roader based on Mercedes’ pure electric ‘EVA2’ architecture. Its analogue in the old world is the GLS, an unfairly overlooked vehicle in the luxury car world. Mind you, the Mercedes range – with its panoply of models and designations – is so sprawling it’s easy to lose one or two down the back of the sofa. It would need to be a big sofa, though. The GLS is huge.

As is the new car. It shares its wheelbase with the EQS saloon, at 3,210mm, measures a resounding 5,125mm in overall length, and sits 200mm higher. It also weighs in excess of 2.7 tonnes, but it is a full seven-seater – a commodity that is particularly prized in the North American market where that sort of kerb weight is junior league. Still, you won’t miss one of these when it hoves into view, blocking the sunlight like the alien spaceship in Independence Day.

Is this really the answer in embattled 2022?

A saintly EV it may be, but try explaining that the next time Extinction Rebellion have glued themselves to the M25 or let your tyres down. Mercedes’ Ambition 2039 is targeting full CO2 neutrality by that year – including decarbonising the supplier network and vetting the cobalt mines – and the EQXX concept shows that lighter batteries and their myriad benefits are coming. For now, the emphasis is on electric mobility, intelligent resource conservation and making in-roads on the circular economy. The EQS SUV is also stealing a march on key rivals like the Bentley Bentayga and Range Rover, for whom full electrification is a way off yet.

The UK is in line for two versions at launch: the EQS 450 4Matic, which averages between 2.5 and 3.1 miles per kWh for a claimed range of 378 miles, and has the equivalent of 355bhp and 590lb ft of torque, and/or the EQS 580 4Matic whose 536bhp output and 632lb ft sees the overall efficiency drop just a fraction. These are claimed figures, mind, and we all know what the real world disparity can be.

The 4Matic cars are dual-motor and all-wheel drive; the electric motors are permanently excited synchronous ones which have a higher power density, greater efficiency, and higher power constancy. The motor on the rear axle has a six-phase design (the not-for-the UK EQS SUV 450 + is a single motor set-up), and there’s all sorts of thermal cleverness in the batteries’ cooling circuits.

The SUV uses the same lithium ion battery pack as the EQS saloon, with up to 12 modules and pouch cells. Mercedes has developed the batteries, and the software that has oversight on them, in-house, and claims that their cobalt content has been reduced to less than 10 per cent. This is obviously an important consideration in terms of sustainability. The battery’s total capacity is a substantial 108.4 kWh, and it’s packaged within the floorpan. It sits in a crash-protected area in the underbody, embedded in the structure with an extruded aluminium profile to the side. The battery modules are housed in an energy absorbing structure and there’s also a double-walled base plate. The chassis uses steel and aluminium, with hot-formed steel used in critical load paths in the A and D pillars.

Mercedes claims the EQS has the lowest centre of gravity of any of its SUVs, although any benefit this might have dynamically is surely off-set by the thing’s overall porkiness. The battery can be charged at up to 200kW using a DC fast charger, theoretically up to an 80 per cent charge in a claimed 31 minutes. There are various intelligent charging modes, including one to preserve the battery life, and bidirectional charging is available in territories like Japan.

Does it look any better in the flesh?

Packaging that third row of seats is a challenge (see also what happens to the Land Rover Defender when so configured). Mercedes has toyed for years with the ‘mono-box’ form on its concept cars, and it works on something that’s like a renegade from Blade Runner 2049. The EQS SUV has so much mass it was never going to be a design doozy, although it does transfer lots of the EQS’s design thinking (though we actually prefer the EQE): the surfacing is strong, there’s a smoothness to the overall form, and the shutlines and joints have all been minimised. It’s also exceptionally aero efficient: its drag co-efficient is just 0.26 (in its cleanest set-up). As with other EQ cars, the primary difference is at the front, where the (fixed) clamshell bonnet is much shorter and steeper than we’re used to. The EQ black panel grille is here, too, with a 3D hexagon light working with the daytime running light to create a distinctive signature. You get the feeling Mercedes’ designers would love to have delivered a totally seamless transition into the windscreen, but it wouldn’t work in the real world; too many reflections. Clever A-pillar, though: its design improves the aero and the acoustics.

The roof is black to reduce the perception of height, the mirrors sit on the car’s shoulder rather than on the doors themselves for aero and acoustic reasons, and the EQS has framed (as opposed to the EQS/E’s frameless) glass. The door handles are flush.

There are optional running boards, which in the absence of a ladder help smaller folk to climb up, but have a downturned element on the under-side that also aids aero efficiency. There’s a little shoulder kick at the rear and a rising rear side window, to add a bit of visual interest in an area of a car that often gets the dodgy end of the stick.

Overall, it’s cleverly executed without challenging the Range Rover as a giant piece of modern mobile technology, and you’d be nuts to choose anything less than 22in wheels. But we’d put money on the upcoming EQE SUV being better proportioned.

“Objectively speaking, the EQS SUV does it all but it lacks the character and supreme authority that makes the Range Rover such a lodestar”

It’s difficult to think of a more complete, absolutely state-of-the-art and some way beyond luxury off-roader than this. Objectively speaking, the EQS SUV does it all, up to and including an unexpected prowess off-road. Its refinement is world-class, its technical specification unimpeachable, the on-board experience about as good as it gets.

Does it sound like there’s a but coming? Maybe. It lacks the character and supreme authority that makes the Range Rover such a lodestar, and reinforces the suspicion that the more sophisticated electric cars become, the less like cars they actually seem. The full-size EQS SUV will undoubtedly work for a big chunk of its target audience, but we’ll hold out for the AMG version of the EQE SUV.