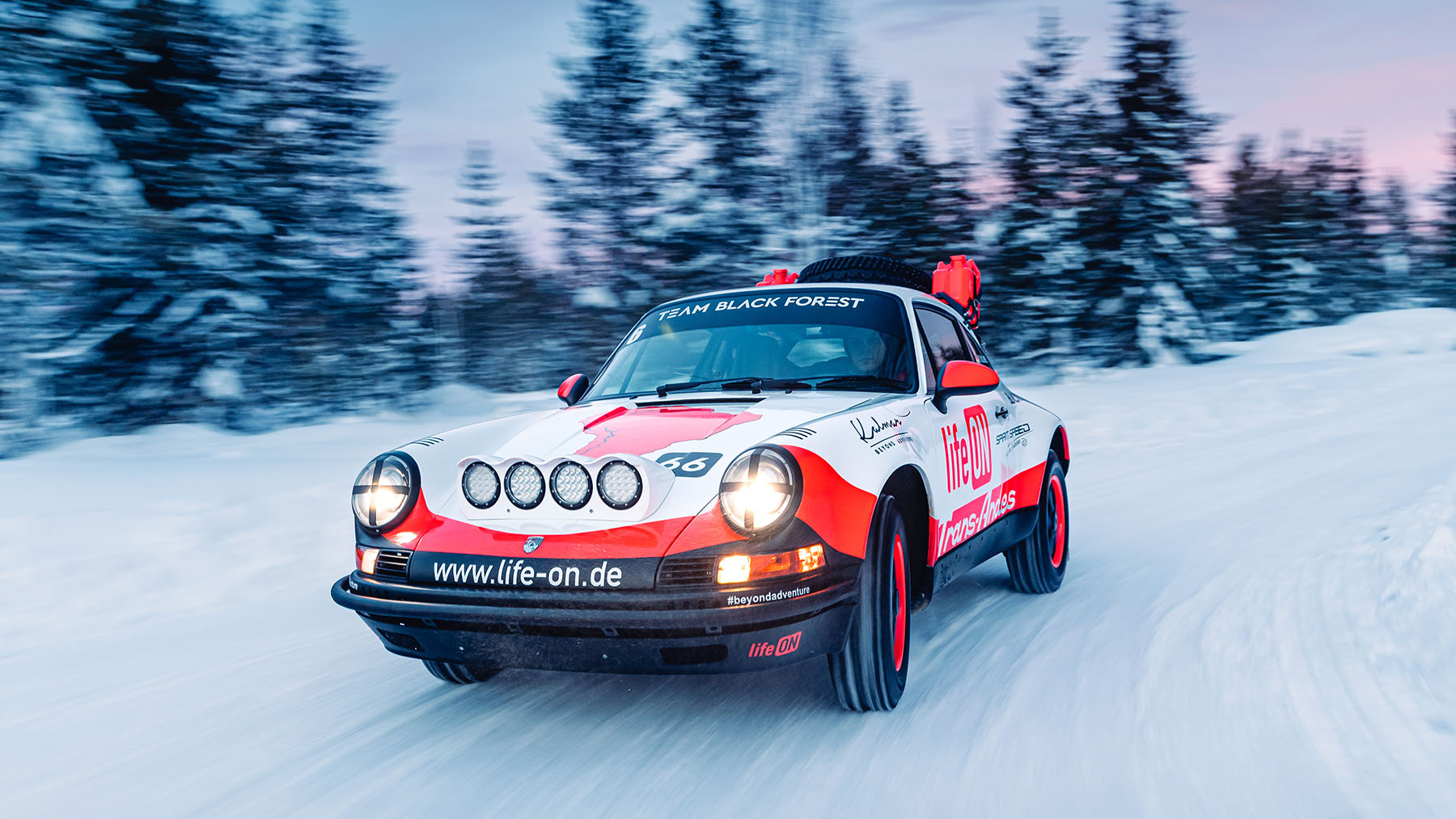 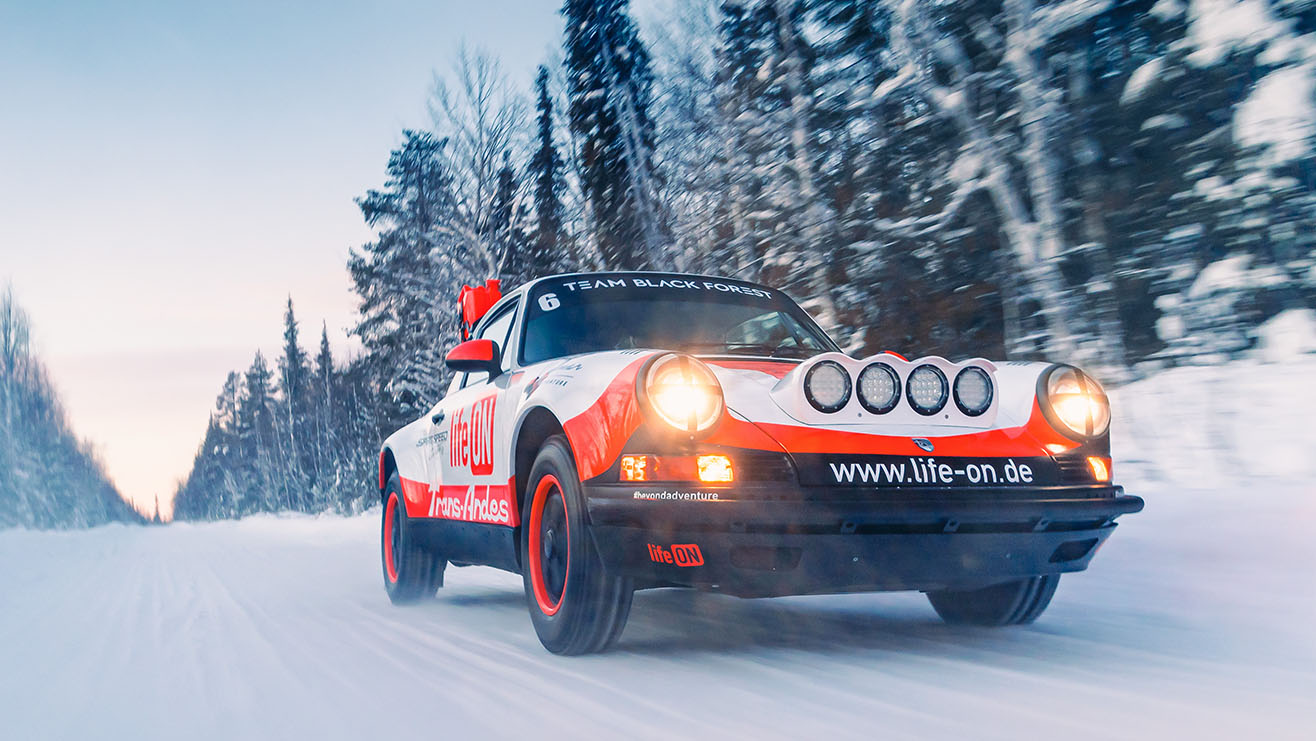 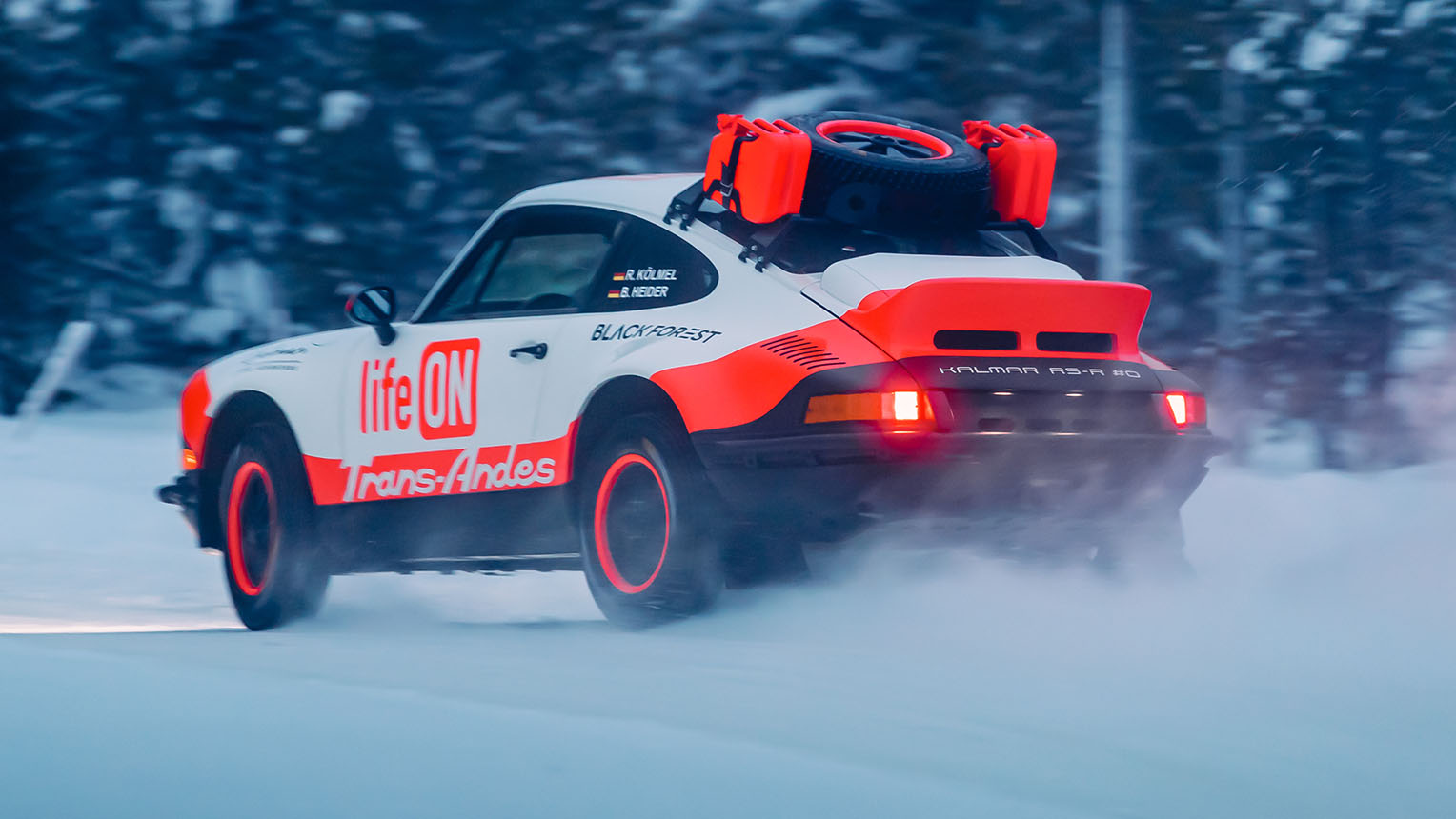 Funny old world right? Porsche sells more electric Taycan saloons and Cayenne 4x4s than it shifts 911 sports cars. And yet, neither of those cars would have that deep draw of desirability if Stuttgart hadn’t stubbornly been fiddling away with its weird arse-engined sports car since 1963.

But this isn’t a Porsche any more, is it?

Nope, it’s now a Kalmar RS-R. Allow us to explain.

Jan Kalmar is a Danish businessman who’s worked for AMG, Porsche and now co-runs a hugely successful car sales operation. Off the back of that he’s set up a sort of rallying travel agency called Beyond Adventure, which invites wealthy Porsche types to go charging around deserts and mountain ranges in modified old 911s or Cayennes.

And if you have such a good time you’d like to buy one of the cars, his car company – Kalmar Automotive – will build one to your exact specification.

He started off applying underbody armour, lifted, toughened suspension and weight-saving renovations to 964s (the 911 from the late Eighties and early Nineties) and its successor, the pretty 993.

But the zeitgeist treatment for 911s right now is – of course – the 1960s restomod. Take a raggedly old 964, backdate the bodywork to look like one of those impossibly dainty early 911s, then stuff that pure bodywork with power.

Singer is of course the household name, most recently creating wondrous Porschography like the DLS.

But there’s also Theon, Workshop 5001, RUF, Gunther Werks, and if you want a rally-ready 911 the folks at Tuthill create some of the very finest in the world. This is a congested marketplace. And yet, Kalmar’s just jumped in, with both feet. Wearing snow shoes.

Take one Porsche 964. Throw almost all of it in the bin (or more likely, keep it for spare parts). Then rebody it with carbon fibre panels. Add a ducktail and pre-impact bumper, um, bumpers.

Underneath, fit suspension that costs €25,000… per corner. Yep, that’s €100k for the full set of four. That gives you an idea of how seriously you need to take suspension when you’re building something to take rallying. 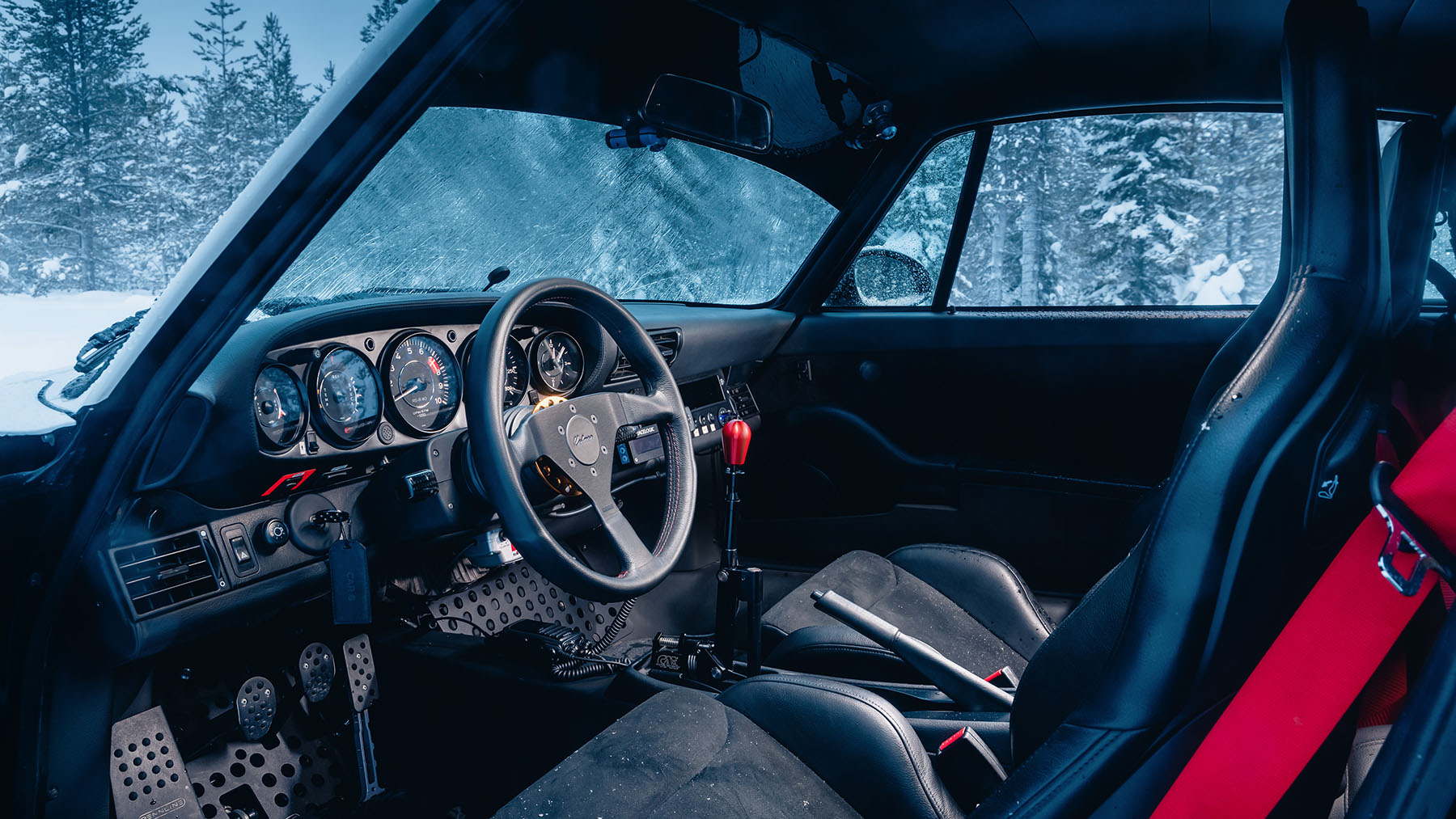 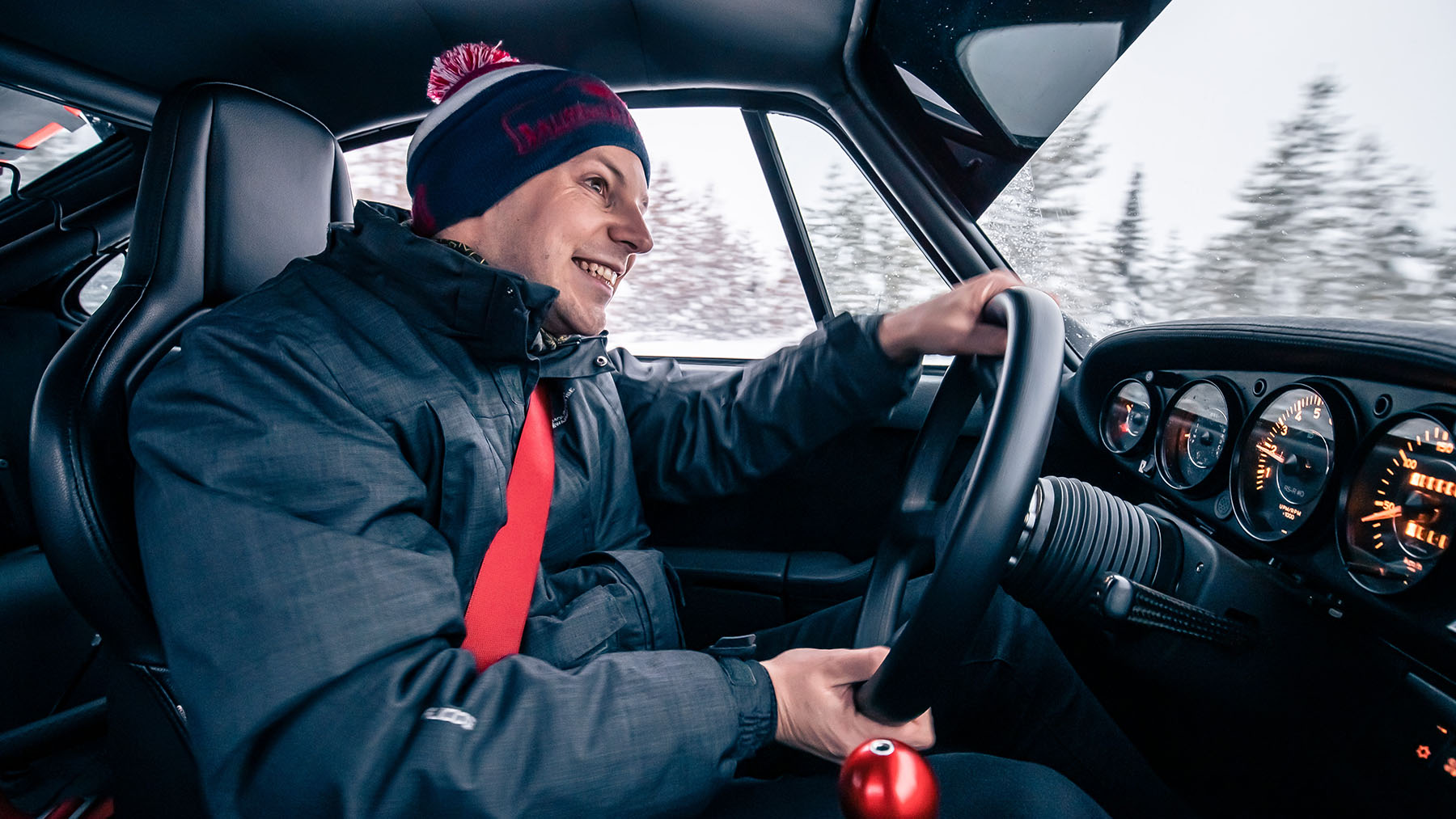 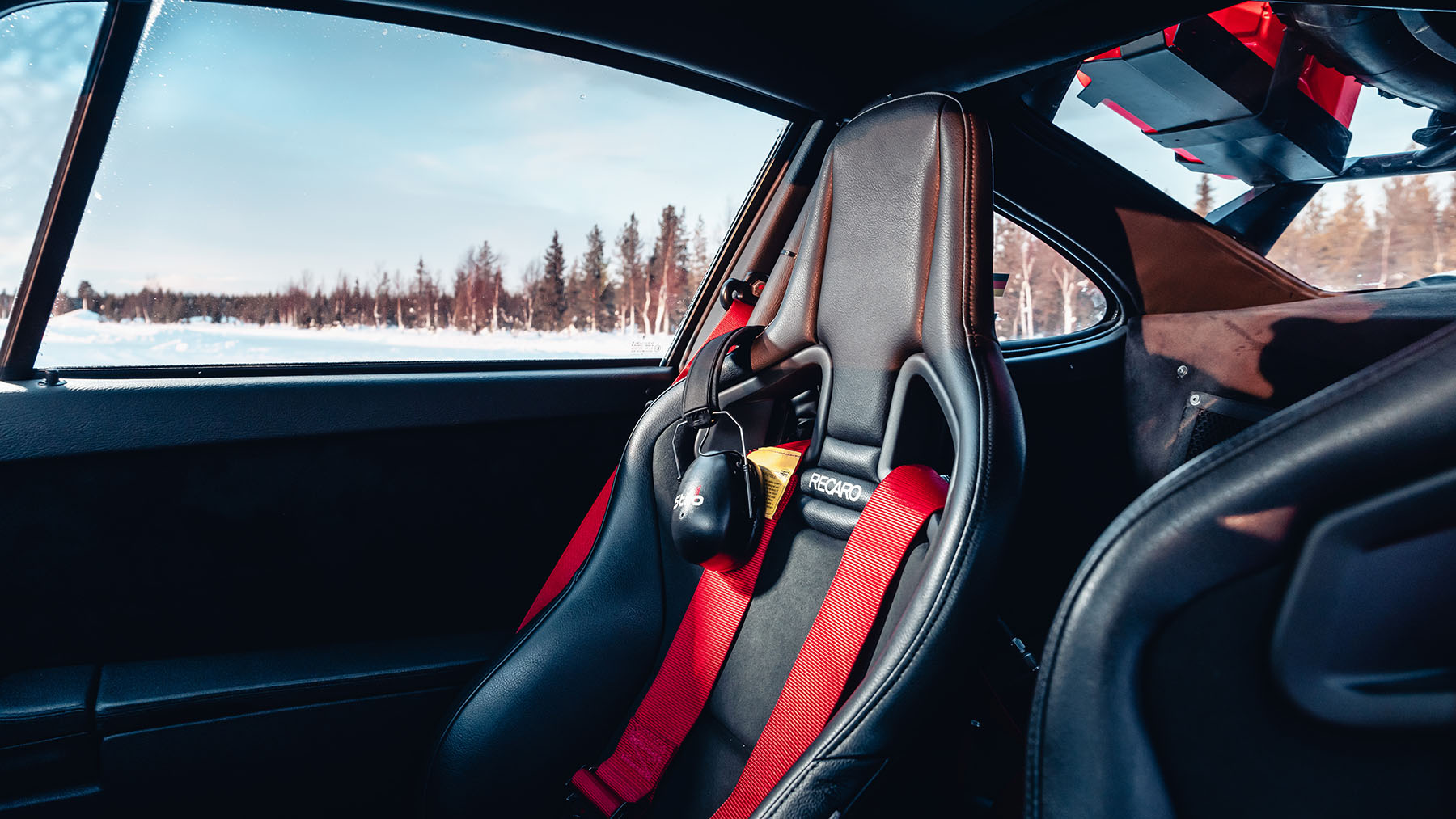 What does Kalmar know about rallying?

Jan Kalmar knows all about rallying. Back in 2015 he set a record for the 17,000km Nordkapp to Cape Agulhas rally. That’s from the northern tip of Norway to the bottom of South Africa. To complete that, you’ve got to drive across frozen wastelands, arctic tundra, desert, and more than a few dangerous cities. Places where you really don’t want to have cheaped out and end up stranded with a busted damper.

So it’s a half-decent off-road?

As you can see, I drove it on snow rather than African safari where its owner has most recently been enjoying it. But it’s magnificent. On rutted tracks our Toyota Corolla hire car bumbled across like a skateboard, the RS-R was phenomenally composed. And clever.

The suspension’s tuned so the car’s nose dives under braking – planting some weight on the 911’s empty front end. But it doesn’t sag – it’s just a momentary dip.

The shocks then stiffen up so you have stability and poise to ride out the drift. It’s very good fun indeed. The engine’s a sweet-revving 3.8-litre 340bhp flat-six – with all the air-cooled character – and the short-throw manual gearbox is utterly addictive.

Course, even a Nissan Micra is fun on snow. Old 911s love the stuff. This feels typically tough, but also wonderfully agile and the suspension is outstanding. With Singer’s off-roader project seemingly mothballed, this is a tempting addition for the Porsche collecting toybox.

Tricky to say. Call it about €350,000, plus local taxes, plus a donor car, which don’t come cheap these days either. But Kalmar’s commissions are so bespoke it’s pretty much POA.

What’s Kalmar up to next?

The RS-R is only one arm of the operation. If you’d prefer a more road-biased, carbon-bodied classic 911, there’s something called the 7-97, as set up by Jan Kalmar’s fellow Dane Tom ‘Mr Le Mans’ Kristensen. They’re also working on engine swaps, alternative fuels, zero-emission powertrains and an intriguing plant-based fibre bodywork as an eco-friendly alternative to carbon fibre. Busy boys.

The world didn’t need another 911 restomod, but this is definitely one worth having. Wonder what Jan is planning next? Watch this space… 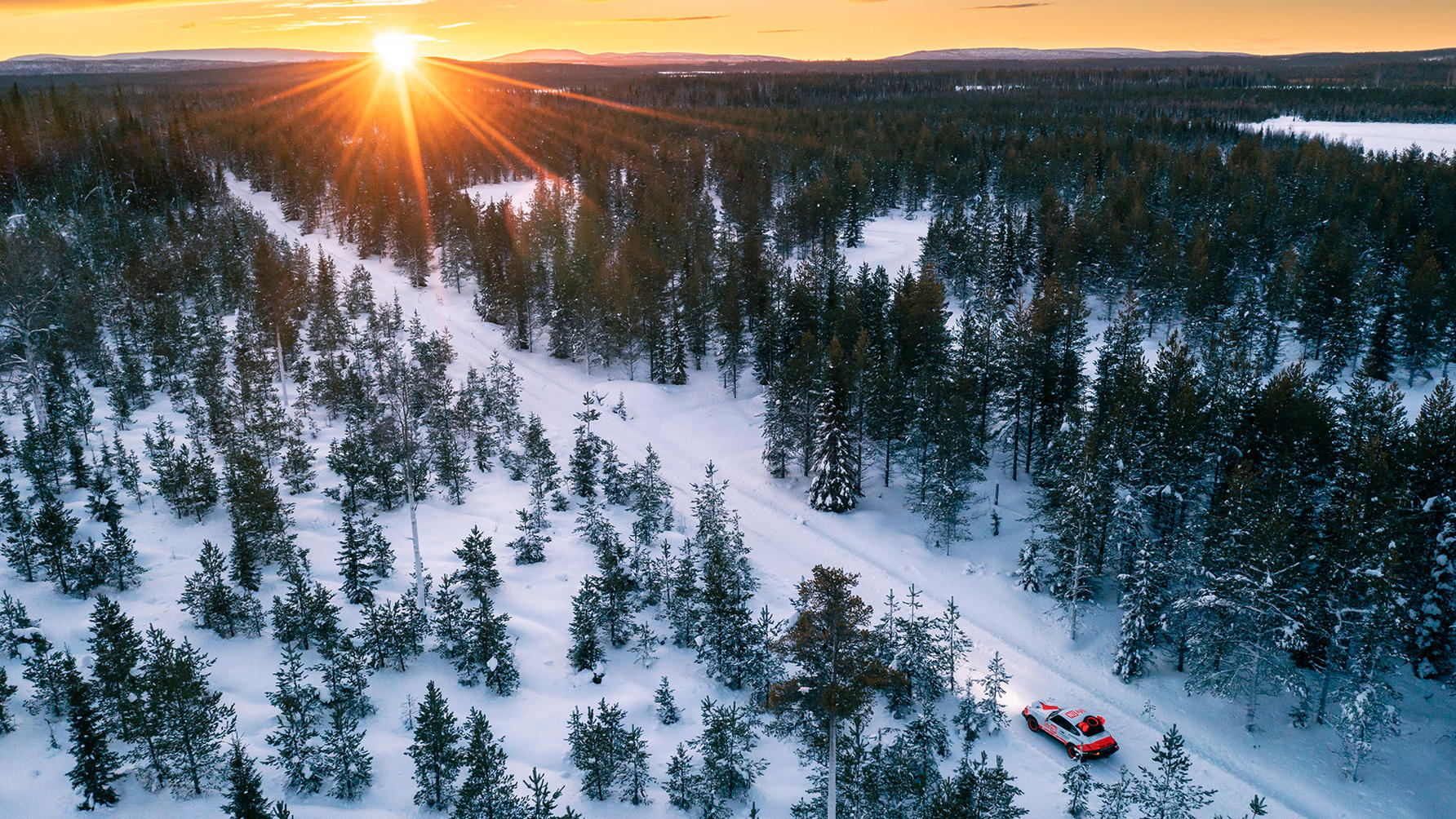