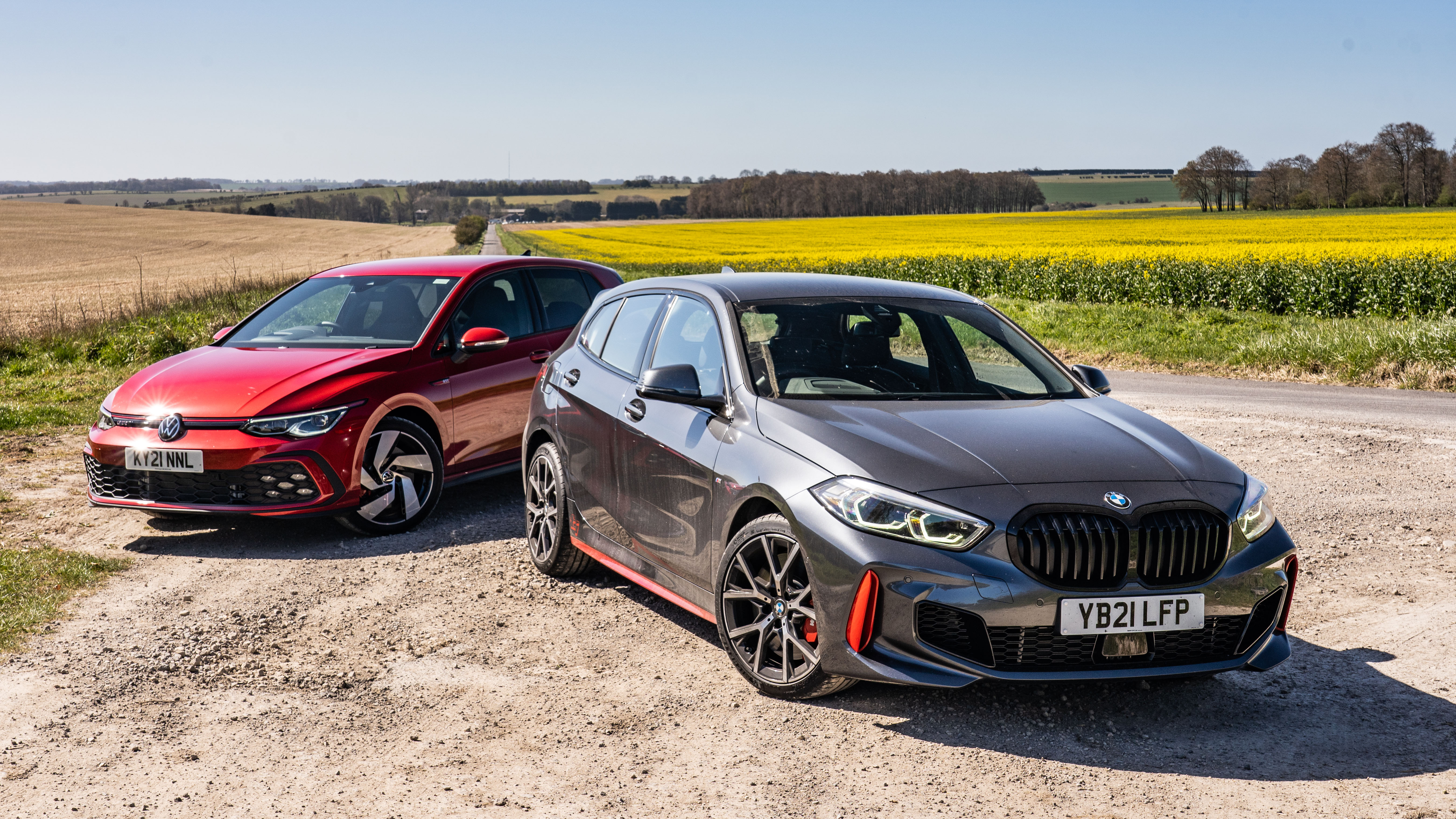 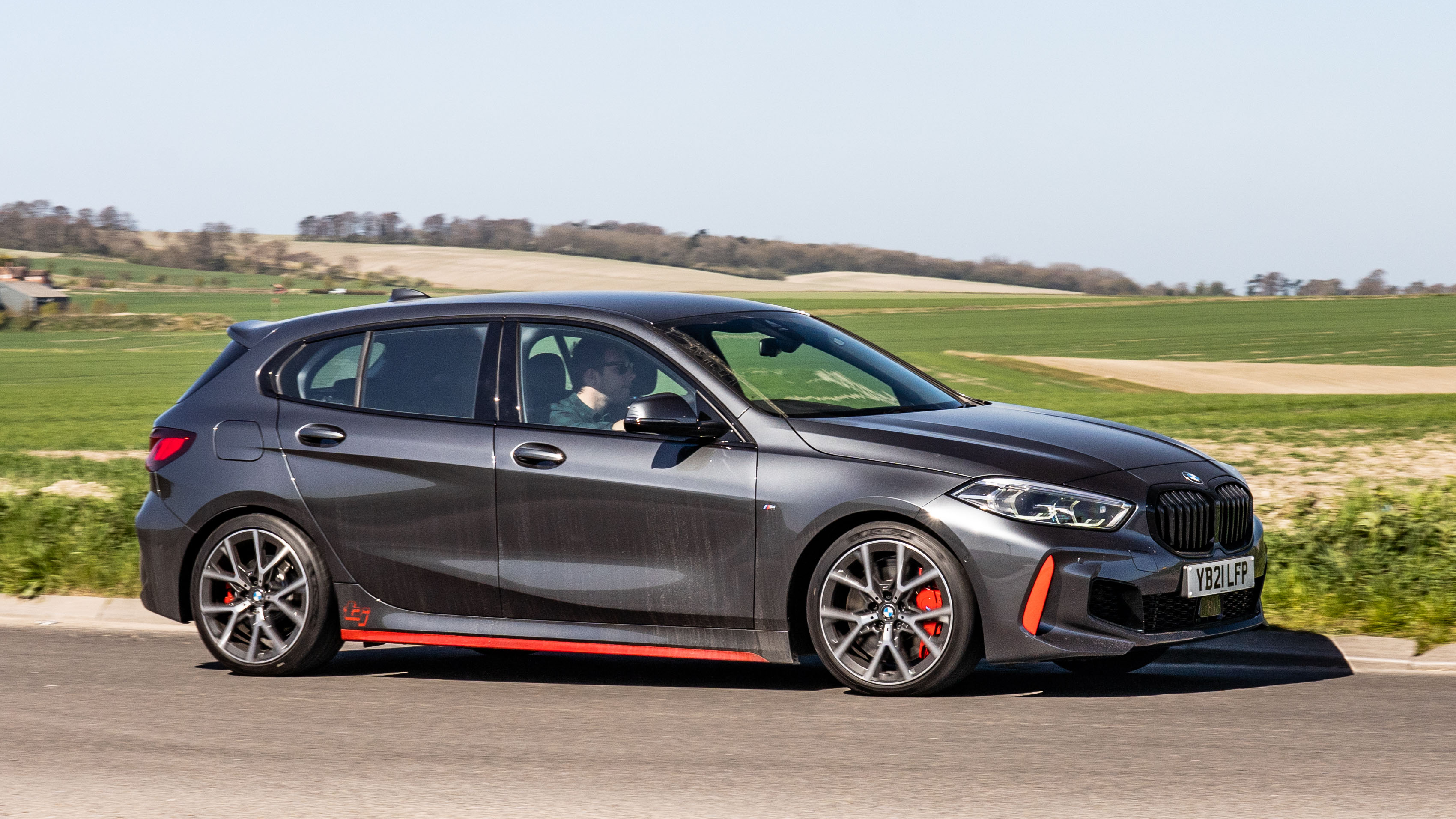 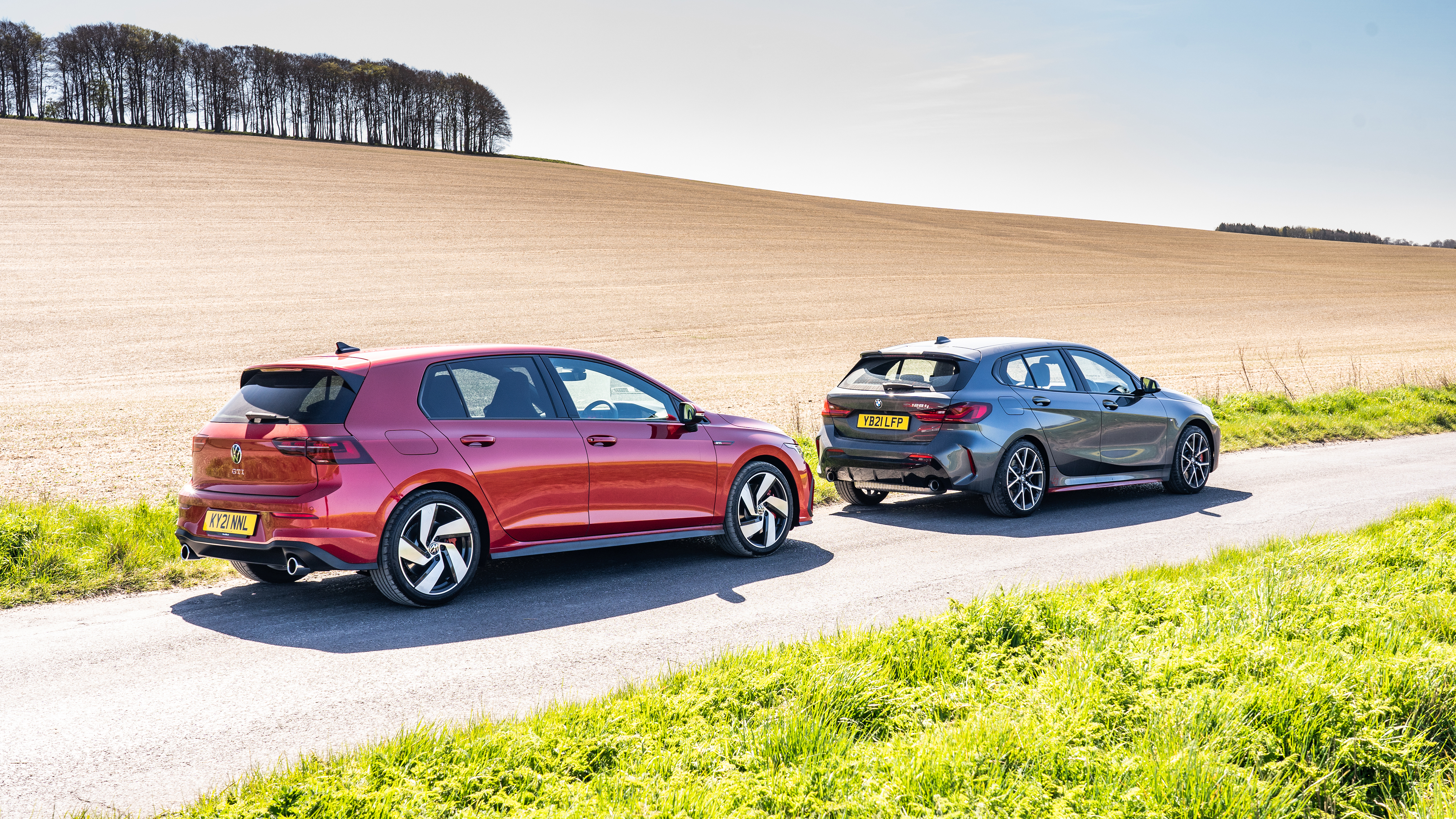 For the next few months in Garage, we’ll be trying to work out who builds the best Golf GTI, Volkswagen or BMW. Only BMW call its the 128ti. Both are front drive hot hatches with around 250bhp and cost within a fiver a month of each other. In fact at less than £350 a month on lease, both look like performance hatch steals. The GTI template (good at everything, even better at driving) is a template that VW mastered with the MkV in 2005, but has chosen to disrupt a little with this new MkVIII. For BMW this is new front-wheel drive territory. Over to our pair of Ollies to talk us through their cars.

OM: Tell you what’s interesting about the 128ti. I couldn’t have it with a manual gearbox or adaptive dampers, both of which your car has.

OK: Yep, I heard BMW decreed auto-only was the way to go because the majority of Golf GTI sales are now DSG-equipped, and having eight gears is good for both acceleration and CO2 output. This basic GTI is now the only hot Golf you can have with a manual. Auto adds £1,500, DCC adaptive dampers are a £785 option, with a sliding scale of stiffness to experiment with.

OM: I don’t think anyone needs 15 levels of damper choice, but a couple would have been good. I was surprised how firm the 128ti was when I first got in it. Really quite positive and taut with detectably less spring travel than the GTI. But then the next thing I noticed was how the BMW’s locking front diff is so much more tenacious than the easy-going VW’s.

OK: I’ll give you that. The GTI now has VW’s electrically-controlled torque-sending diff as standard, but it’s not as corner-hungry as plenty of other FWD hatches. Like Honda's, Hyundai's or Renault's.

OM: The BMW’s is very obvious. And surprisingly tight. Accelerate and you get some torque steer, power through roundabouts and it’s tenacious. More in the mould of a Civic Type R than a Golf GTI. I do think the whole car needs to settle a bit, though. When we group tested the 128ti originally (against the Golf GTI and Focus ST), Stephen Dobie praised the ‘polite’ diff and ‘smart shifting’ gearbox. But that’s not been my experience so far. It arrived with less than 500 miles on the clock, the engine isn’t as smooth as I expected, nor the eight-speed auto gearbox as seamless. Even in manual mode it could be crisper and more immediate. I suspect there’s something in the software that allows all this to bed in as miles are accrued. Hope so, as at the moment the gearbox seems rather crude in its decision making, the engine slightly gruff and the diff quite aggressive.

OK: Hope you haven’t got a Friday afternoon car. I’ve driven a few 128tis now and the gearbox has been as peerless as it is in the M440i I’ve been running. Even as a committed manual-worshipper I’d take the paddles over the GTI’s flaccid, lightweight shift, topped with a lever they seem to have found in the middle aisle of Lidl. And that’s far from the most annoying thing inside the new Golf.

OM: Hold fire, not done. I’m also currently getting nowhere near the 40mpg BMW claims and Stephen saw from the test car, just 29.1mpg over 440 miles so far. That’s un-BMW – they usually produce engines that are not only consistently more responsive and muscular than rivals, but more economical too.

OK: Here’s where the GTI’s 45 years of finishing school close the gap. This one’s only a couple of hundred miles old, but already it’s good for 38mpg on a run, and 32mpg on average. Thing is, those little boons are supposed to be the chasers that make GTI ownership a delight, the bonuses atop the bedrock of ‘a great drive’ and ‘a lovely interior’. And so far, I’m not sure those fundamentals are present and correct.

OM: Let’s talk chairs. Yours tartan trademarks are designed for a person who is no stranger to seconds at the buffet, while the adjustable side bolsters on mine massage the love handles quite vigorously on a bumpy road. Odd that the bases are quite flat, but as an interior to use, mine wallops yours out of the park. Mine’s got a clickwheel as well as a touchscreen. And buttons. Heard of them?

OK: I sense that we’ll have plenty of time in the coming months for you to gloat over the simple pleasures of ‘having heater controls that light up so they’re useable at night’ and ‘being able to steer around a corner without turning on the heated steering wheel and muting the stereo thanks to touch-sensitive steering wheel buttons'. What the hell was VW thinking?

OM: Be interesting to hear if you eventually get on with the infotainment in the Golf, because honestly, it could handle like a Civic Type R, and I’d still give it a swerve because of the interior screen functionality. Every time I look in the GTI it draws me in – I’m a sucker for the tartan-n-golf ball stuff, love the clean, sleek look, but the operation of it irritates me beyond belief. How did VW get that so wrong? Did they cull the entire functionality dept after dieselgate?

OK: My theory is Wolfsburg decided the ID family needed a Tesla-ish minimalist interior, but by the time they’d paid to develop a ‘hey, forget diesel, look over here!’ family of fresh EVs, a new factory to stamp them out, and a heap of angry diesel compensation, there wasn’t enough in the kitty for the Golf to be gifted a cabin that makes sense. And I have to say, so far I’m with you. This is the first Golf GTI I don’t find myself idly configuring on VW’s website, fantasising about speccing my own, chiefly because the interior is such an own goal. But, VW insists it’s genius if you actually live with it every day. So, here goes nothing.

OM: The 128ti is slightly disjointed for me at the moment. I can’t remember another car I’ve run that felt so badly like it needed to be run in. I just hope it comes good. I’m not sure about the branding - the lipstick is a little brash and I don’t think the ti badging has any resonance at all. It hasn’t been used in over 20 years and the last time it was, it wasn’t attached to the iconic 2002 that all the beard-scratchers like to rub on about, but an E36 generation 318 coupe.

OK: Whereas the entire car industry would sell its soul twice over to get the brand recognition that comes with ‘GTI’, but I’ve an uneasy sense that VW got complacent with its affordable icon right as Hyundai, BMW, Ford et al have arrived with credible rivals. Maybe this GTI’s problem is it’s now been shunted into base trim status, languishing below the Clubsport and Golf R. It has to feel its place in the pecking order. Anyway, you get on with putting some miles on the 1er, and I’ll meet you once I’ve finished reading the Golf’s instruction manual. Somewhere there must be a chapter explaining why the touchscreen loads slower than a teenager filling a dishwasher.