By 2022, here's what Alfa plans to sell. How does it compare to rivals, though? 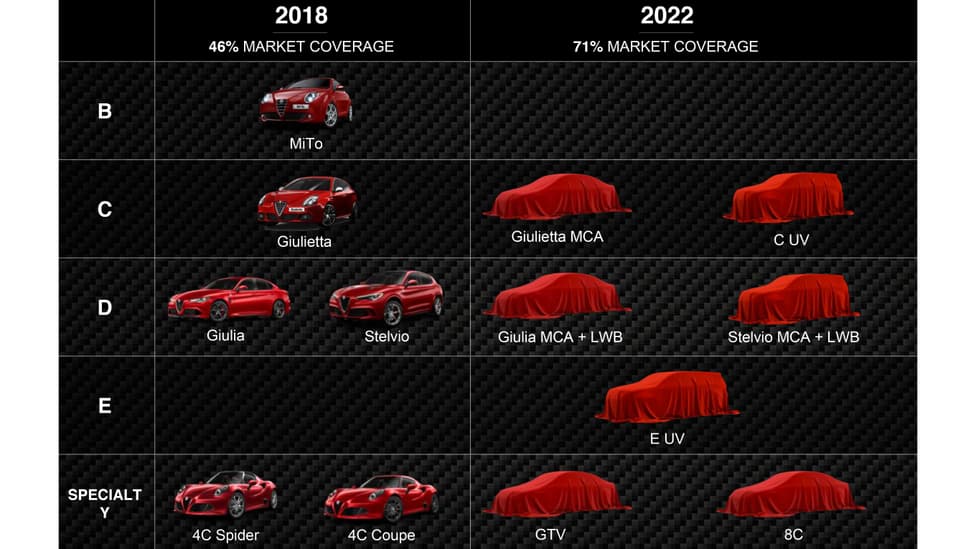 On Friday, Alfa announced that by 2022 it would launch two sports cars, the 8C and GTV. They're a nice lip-smacking treat. But they also serve to deflect attention from the fact that far from catching its rival brands by 2022, Alfa will actually have fallen further behind.

Here's the sad truth of the matter. By 2022 Alfa will have a range of just seven cars. Here they are, as listed on a chart shown to investors last week.

First of the seven is what's labelled as Giulietta MCA. That's industry speak for 'mid-cycle action'. What you and I would call a facelift, with in this case revised engines. (The new powertrains are needed by the way because the whole Fiat group plans to stop diesel engines by that date, except in vans and trucks. So it plans on replacing them with hybrids.)

Anyway, a Giulietta facelift eh? Still on sale in 2022? That's a full 12 years after the original car was launched. It was modern enough back then, but this counts as egregious neglect in the face of new generations of rivals from VW, Ford, PSA and so on.

The bigger, rear-drive Giulia will get a facelift by 2022 as well. Plus, as with all its rivals, a long-wheelbase version for China. Same goes for the Stelvio: facelift and LWB option.

Then there are two new crossovers, one smaller than the Stelvio and one bigger. They're labelled as UV or utility vehicle in the plan document. Those will sell well.

Plus those headline-grabbing – if inevitably small-selling – sportier cars, the 8C supercar and GTV Coupe.

The 4C will have departed by then. Also dying is the MiTo, a car that was outdated at launch (too related to an old-gen Vauxhall Corsa) and has been given almost zero visible updates since.

So, what we will have from Alfa in 2022 is a rival for the Mercedes A-Class hatch and C-Class saloon. Plus crossovers that go against the GLA, GLC, and GLE. And, if you will, rivals to the C-Class Coupe and the AMG GT R.

Now, step back and look at the number of other cars Mercedes makes. The estates, the bigger and smaller coupes, the S-Class and GLS, the coupe crossovers, the convertibles, blah blah blah. You could do the same comparison exercise with BMW or Audi and get the same result. Even the 2018 portfolio of struggling Jaguar looks bulging alongside Alfa's plan.

There's also mention of high-level driver assist in the new plan, but that's four years behind Audi and Mercedes.

Still, what perhaps matters is that the plan largely ensures an Alfa will always be an Alfa. Sporty, great-looking and charismatic. Are we upset that Alfa is not planning on building a rival to the Mercedes B-Class or the BMW 2 Series Gran Tourer? We are not. In fact we’re delighted. Are we bothered that there are no puny diesels in the plan? Nope. If Alfa Romeo builds great cars with a strong focus, that's the sort of exclusivity we can live with.

Alfa is part of a conglomerate. So it doesn't need to build SUVs with seven seats or rock-crawl ability. Those are Jeep's job. Small cars are for Fiat. Mercedes might have the X-Class pickup, but Alfa has no need, because Ram sells a huge range of pickups.

Even so, what Alfa is calling a major series of new-car launches is actually a pretty tiny investment by the standards of the industry.

The last time Alfa laid out its product plan was back in 2014. It said that by 2018 it would have eight new cars and sales of 400,000. In fact we've got two new cars, the Giulia and Stelvio. They're brilliant, but they're not moving the sales needle fast enough on their own. Total numbers of Alfas sold globally in 2018 will be about 170,000.

The new plan calls for sales of 400,000 from seven cars by 2022. Basically then, it's just the last plan, postponed by four years.