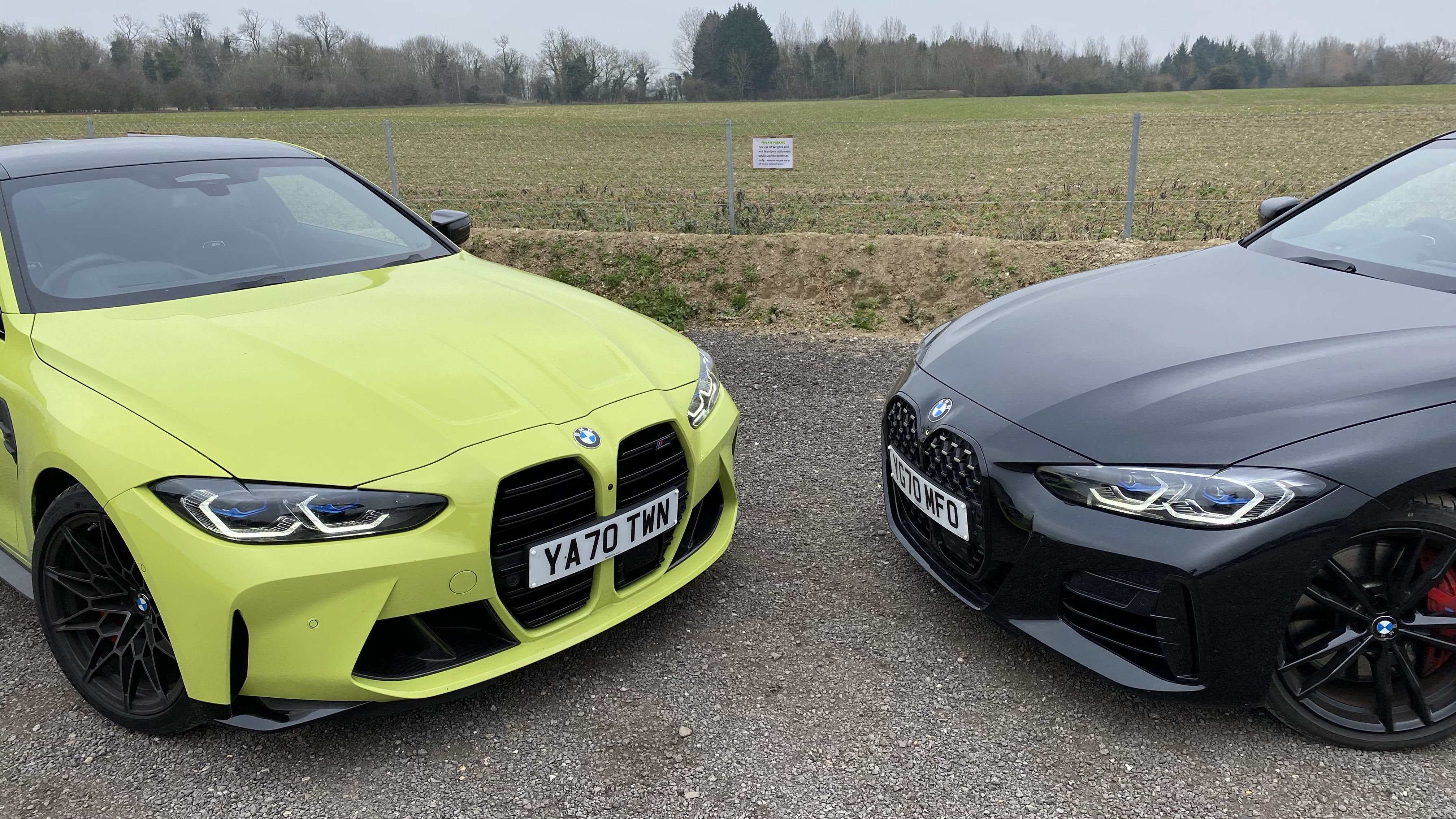 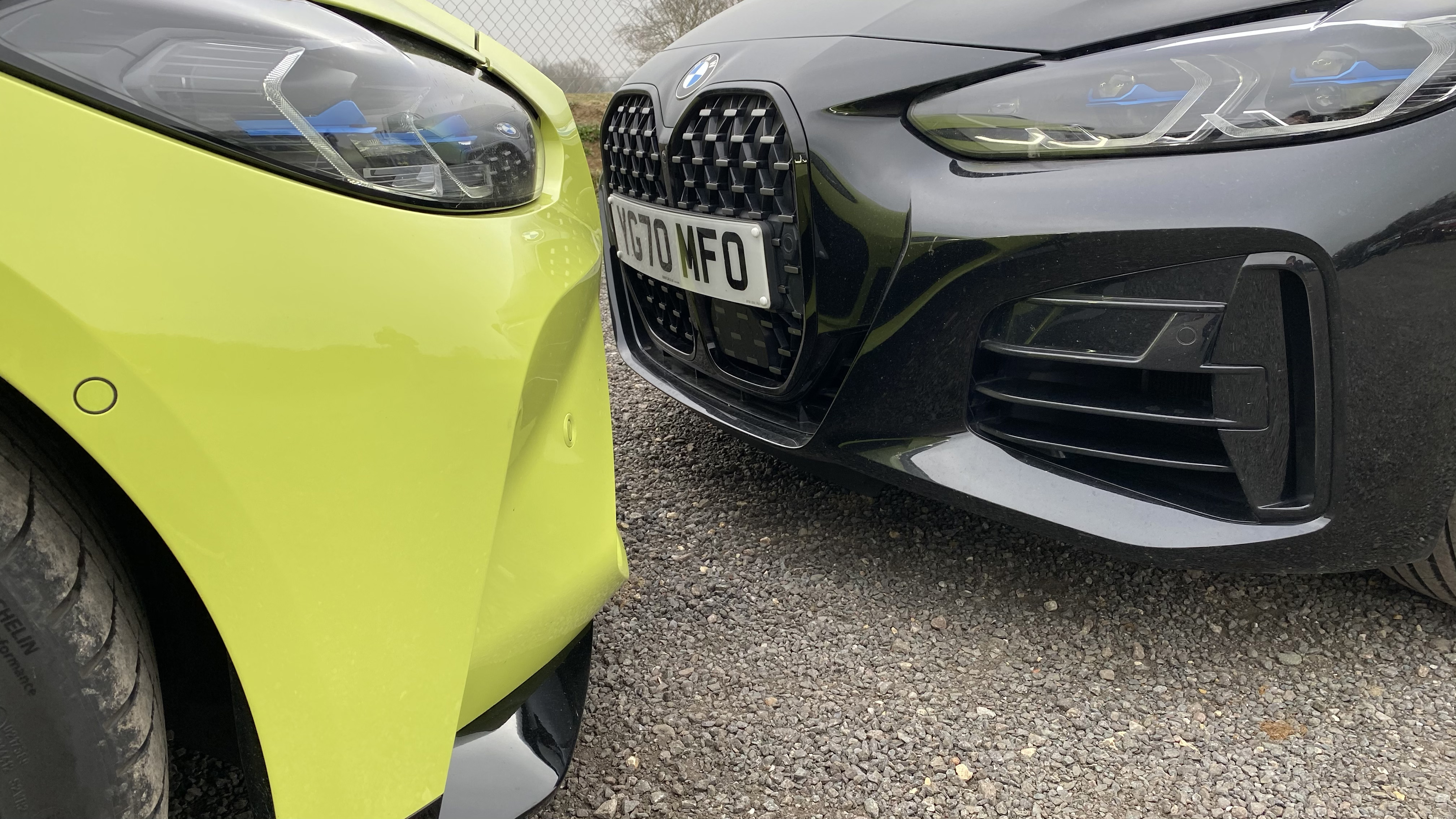 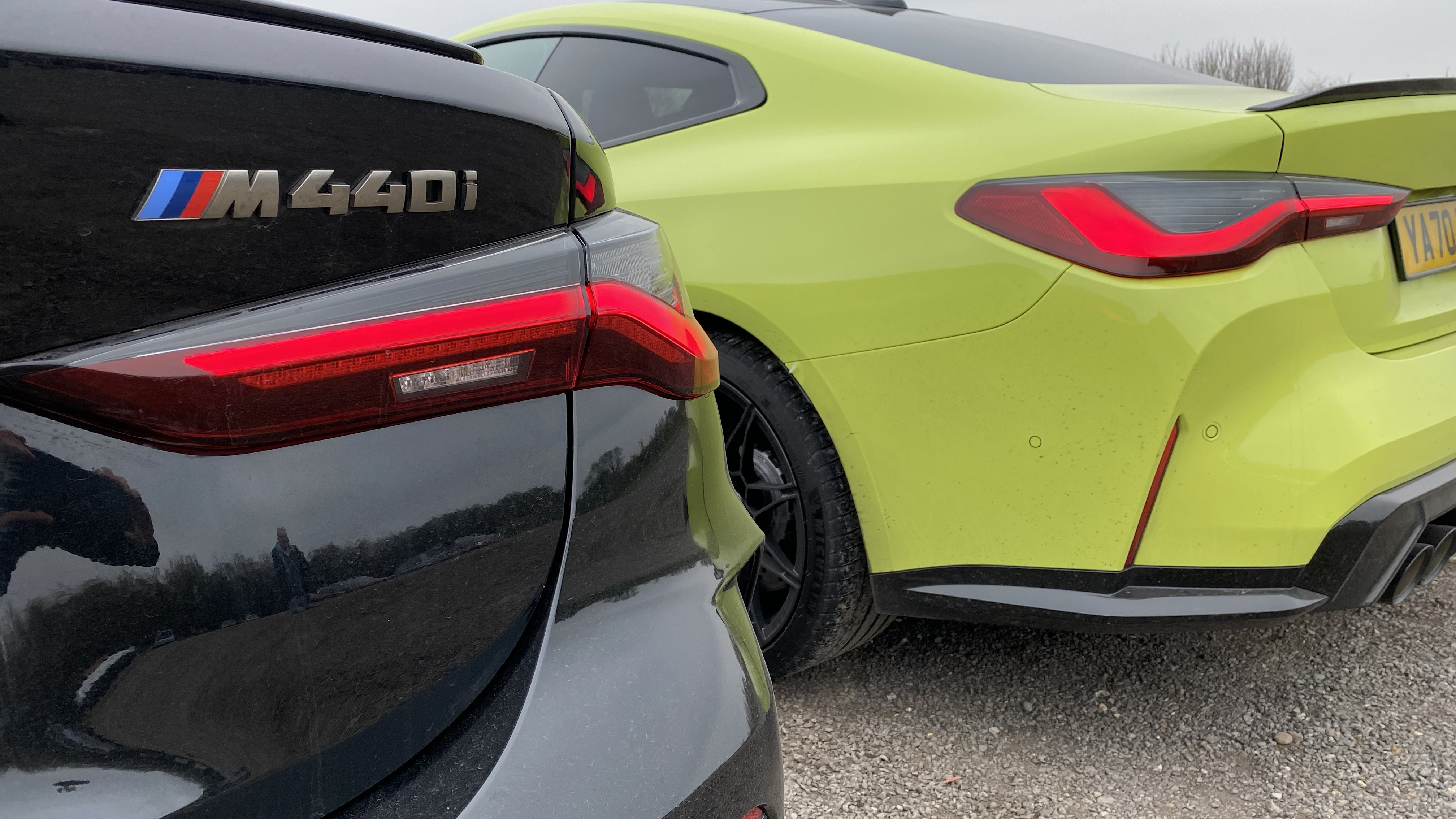 Simple question then: which do I prefer on a simple, half-hour first impression? Here’s the tale of the tape, from the moment I met TG’s Stevie Dobie in a rural car park. We only do this during work hours, honest.

5 seconds: Flipping heck this M4 is an eyeful. I know the relative specs are Darth Vader vs Billie Eilish but colour aside, the M4’s nostrils are more flared, the haunches are notably wider and sharply creased, it’s got exhausts I could park the M440i in to shelter it from the rain and the wheels are so deeply dished I reckon they’re bolted directly to the differential. The M4 is far from a pretty car, but it looks completely bespoke next to the 440, which is ‘just’ a 4 Series. They only seem to share headlights and glass.

18 seconds: Ouch. Just sat down inside the M4 and it appears to have kneed me in the unmentionables. Turns out the bucket seats feature a pointless carbon fibre codpiece slap-bang in the middle of the squab. Good job I’ve been skipping leg day like everyone else in the country while gyms are illegal. My thighs fit snugly beside the jutting gutter. But what if you’re a powerfully built company director, or you’ve been a bit heavy on the lockdown pies?

25 seconds: Oh dear. Just looked around. That’s the tip of a tasteless carbon fibre iceberg. It’s everywhere, from the finger-skateboard paddles to the centre console. And why are all the mode switches and iDrive buttons now glossy black, rather than the matte finish in the M440i? Way harder to see in sunlight. Lucky we don’t get any of that here until July.

30 seconds: PARDON? NO I JUST STARTED THE M4. Blimey, it’s a LOT louder than an M440i. But it would be, because it’s got the Channel Tunnel hanging off the rear bumper. It looks shouty, sounds shouty, and people in the car park are looking and judging, hard. Time to go.

1 minute: I was once lucky enough to get straight out of an Audi R8 Plus and into a Lamborghini Huracán. And as I set off in the Lambo, I realised it was just like the Audi, except everything had been made deliberately more difficult, because of Lambo-supercar-sense-of-occasion.

That’s what this M4 feels like, after the 440i. The seat is firm. The ride is firmer. The engine sounds like a recently kicked wasp nest. Four months in the polite, comfy M440i has turned me into a big, squidgy softy. Gulp.

Traction control is in the halfway-relaxed M Dynamic Mode. This used to give me the willies in the old M4, and the M440i doesn’t have it. So, if I live to three minutes, we’re onto a winner.

3 minutes: Success! So far, so not-dead. In fact, traction is mighty for a RWD, 503bhp monster. The auto gearbox seems to bleed power ever-so-slightly more calmly to the rear axle, rather than dumping it all at once like a cartoon grand piano on your big toe... as the spikey old M4 did. The M engine is more free-revving than the 440i’s creamy-smooth but less frenetic motor, too, as if the flywheel has been replaced with a paper plate.

5 minutes: Clever little touch by BMW with the gearshift paddles. Even flat-out, the M4’s actual shift isn’t night-and-day crisper than an M440i’s. Both are 8-speed slushboxes, don’t forget.

But in the 440, the paddle action is like squeezing a marshmallow when poking it onto the end of a roasting stick. The M4’s well-defined shifter ker-lick feels like you’ve just pulled the trigger on an anti-aircraft cannon. So, each paddle pull feels more mechanical, even though it’s just a boring switch, like the interior light button or the heater controls.

8 minutes: Feels big, this M4. S'pose it’s the same size and power as the old V10 M6. Weird how the combo of fatter arches, catseye-slapping tyres and the taut ride causes the roads the M440i oozes along to really shrink around the M4.

Stevie’s ahead driving ‘my’ car and he’s deploying the M440i’s more supple (but less tightly controlled) chassis to superb effect. The 500bhp M4 easily keeps its 380bhp cousin in its sights with that sledgehammer of horsepower, but I wouldn’t say the M4 Comp’s hugely faster on a give-and-take UK road.

The M440i’s all-wheel drive, however, and I’m making do with RWD. Wonder how the AWD M4 will fare?

25 minutes: Sorry for the delay, Been enjoying myself. I like this M4 Competition. By which I mean… I don’t hate it like I did the old M4.

That car didn’t just feel like it could kill you when the road was wet, cold, or not dead straight. It actively wanted to, painfully. It’d even unstick itself midway through a brisk second-to-third gearshift if it felt particularly vindictive.

I loved how it looked, the pedigree, and the fact it needed some respect, but I’d have had a C63 Coupe over the old M4 all week long and twice on Sundays.

This new one though – well, it might have been built for me. Which is probably why plenty of other people with chisel-cut jaws and sinewy legs are going to moan it’s gone a bit soft. It’s certainly got bigger, and it feels heavy. The gearshifts are less brutal and it’s a friendlier machine in MDM mode. I reckon it’s a better daily driver than the old M4.

And yet… I’m not convinced it’s a sweeter road car than a M440i – not on cracked UK roads (road-test cliché bingo alert).

But no-one’s cross-shopping an M440i and an M4 Comp, are they? One of these is an Audi S5 rival, the other battles Aston Vantages and Porsche 911s.

40 minutes: Back to base. Interesting exercise, this. When I heard the new M4’s spec I worried BMW had ‘done an Audi’ and not put enough daylight between the top-of-the-range M440i and the full-fat M car (see the relative merits of S5 and RS5 for details).

The M440i’s far from disgraced itself here. If you want an everyday mini-Bentley Continental, it’s the less wearing, easier-to-drive, quieter, easier, more frugal car. Cheaper to buy, less offensive to look at. Maybe.

The M4’s a different animal, though. Wantonly, deliberately (perhaps a little artificially) aggressive, but there’s play value in all those modes, and all that finely-honed ability. 40 minutes in the Comp pumped my pulse rate higher than four months of assured, polite miles in the M440i. Both nail the job they’re asked to do, then.