This is the brand new BMW M4 CSL 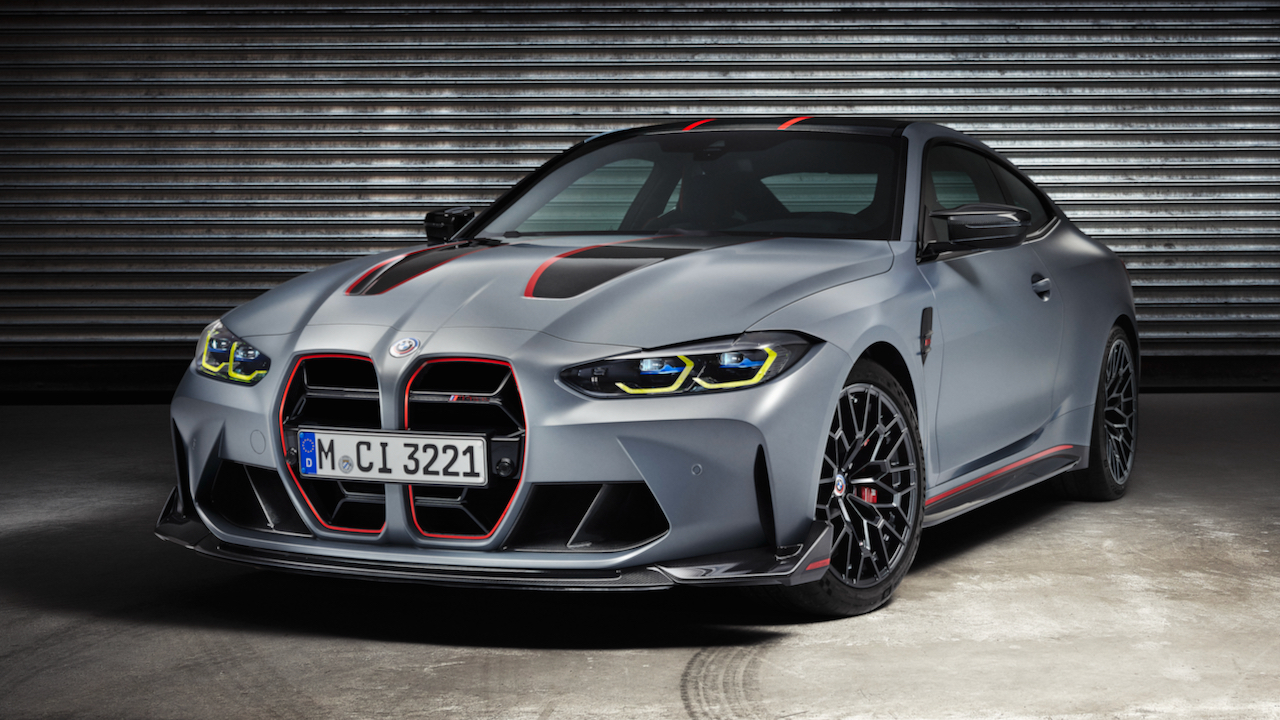 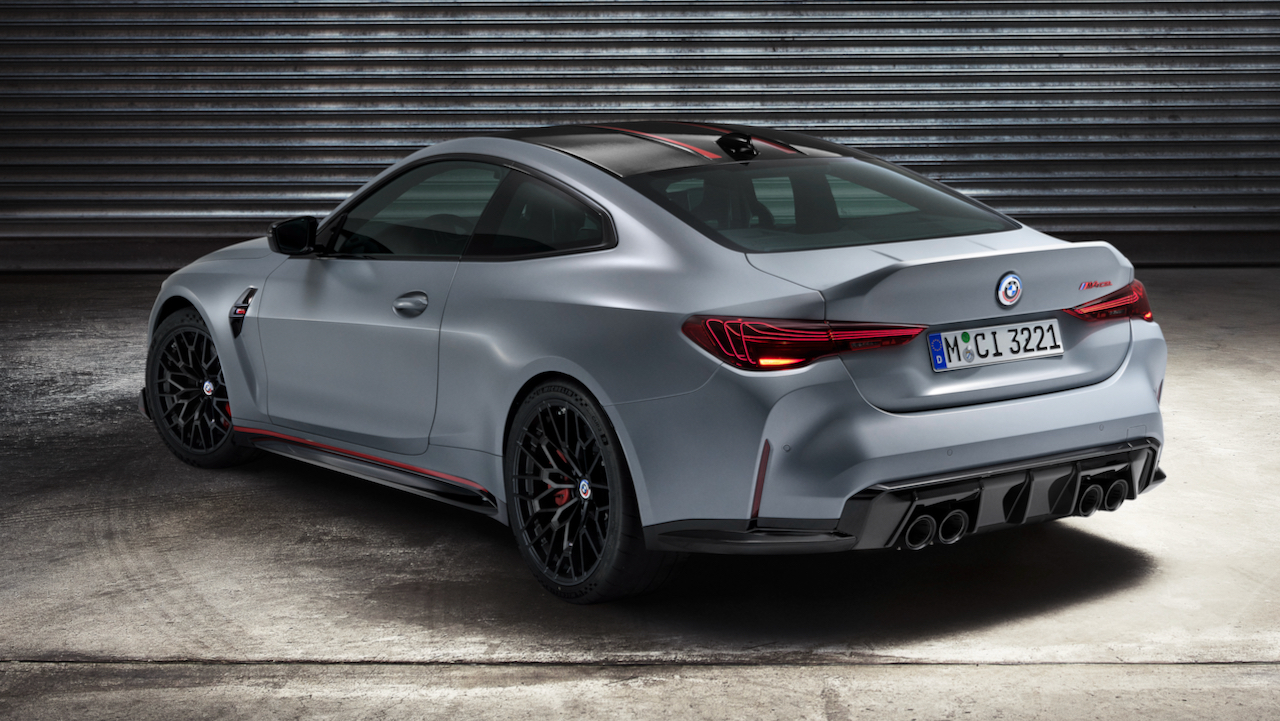 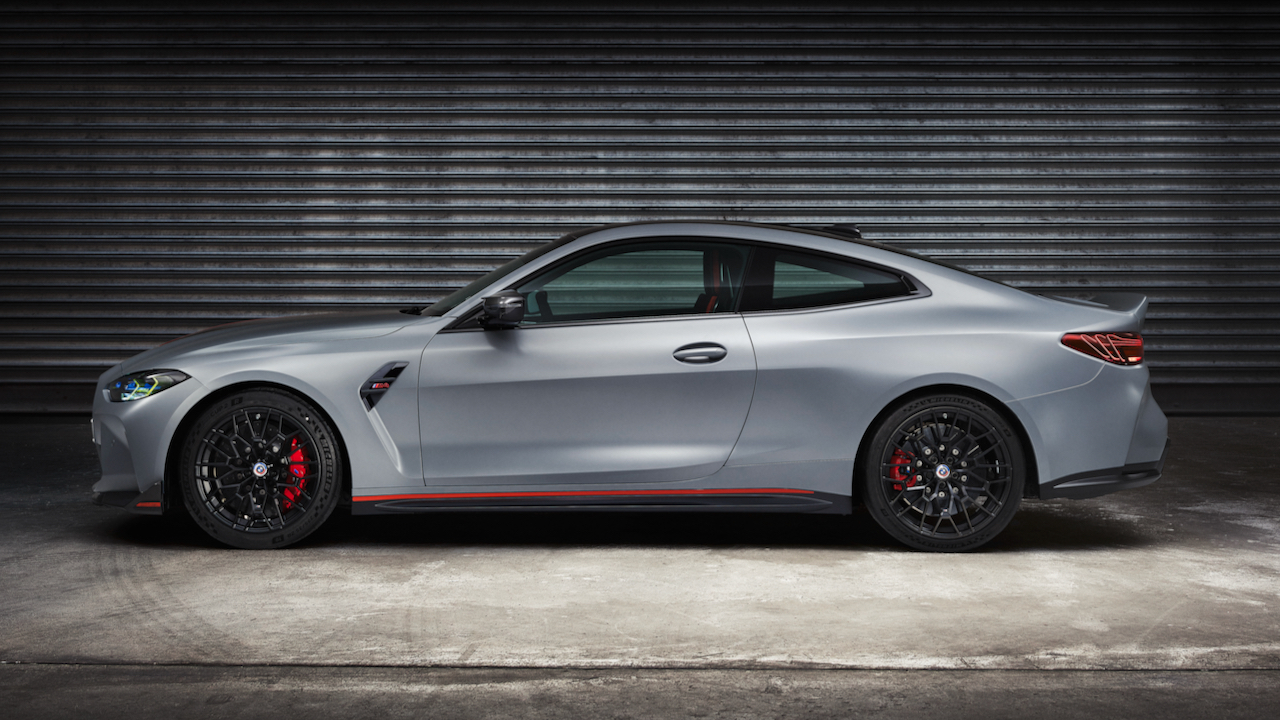 CSL. Letter combinations come no more iconic. And yet this is only the third time in 50 years BMW has used them. Maybe the scarcity is what gives them power. Plus the fact the one we all remember, the 2003 E46 M3 CSL, is arguably the definitive M car, the best there’s ever been.

Nevertheless this new M4 CSL is cause for celebration, or actually maybe the result of celebration since BMW is 50 this year. Proper bit of self-gifting. But not the only bit. The other present it’s given itself is the XM, a 750bhp hybrid SUV. Don’t start. Let’s just pray that’s not the vision of the future BMW M clearly thinks it might be.

Quick, but being rear-drive only, a regular M3 xDrive is a considerably better off-the-line sprinter. We timed one to 60mph in 3.2secs. Doesn’t matter, because although simple physics dictates that less weight and more power delivers more speed, other things matter.

Other things such as this. Why CSL, not GTS, you might be thinking, the GTS badge having been worn by the last two generations of upgraded M3/M4. Here’s Dirk Hacker, BMW M’s head of engineering: “There’s a slightly different focus for the cars, so CSL is more for lightweight and the GTS is more track tool, so includes rollcage and wing.” This is good news right? A lightweight car that’s aimed at road first, track second.

So to begin with Iet’s focus on the dynamic changes, because they’re probably more significant in giving the CSL a character of its own. First of all the ride height is dropped 8mm. Big deal. Next, instead of one coil at each corner, there’s a secondary helper spring. This chiefly allows the main spring to maintain contact with its seats, improving control when driven hard. There are new anti-roll bars for a similar reason and more camber built into the front axle’s swivel bearing. 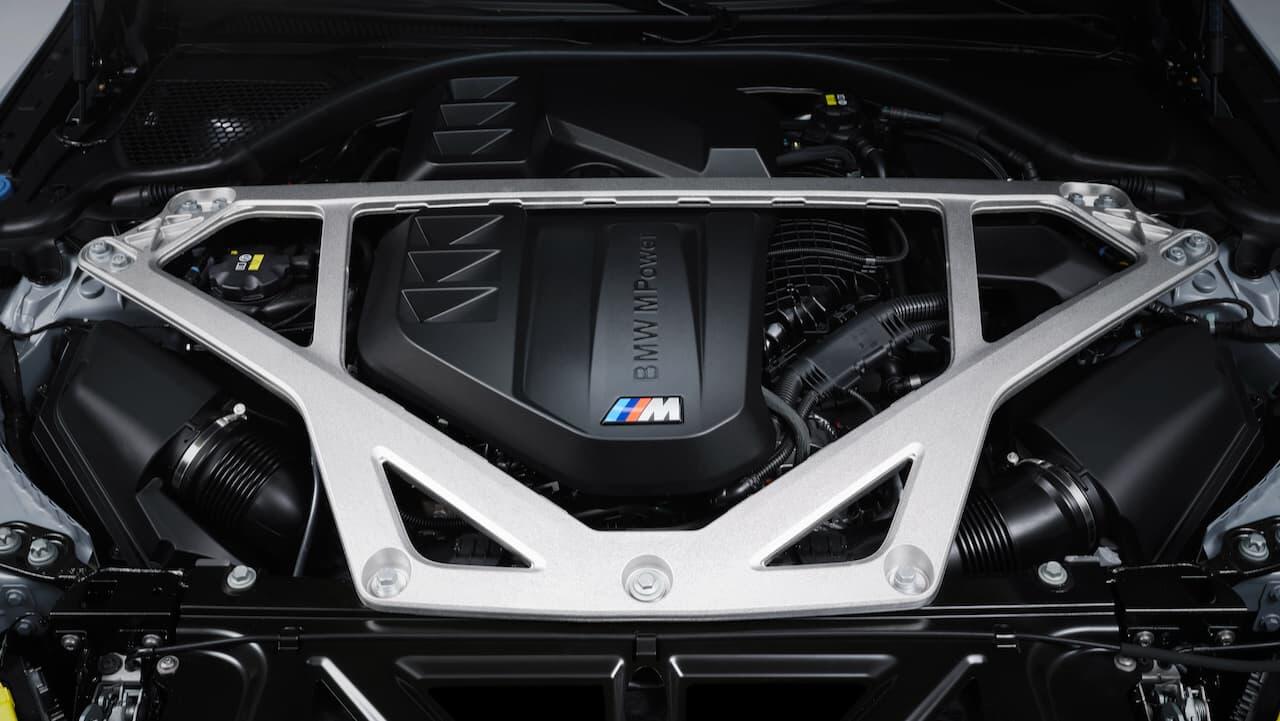 At the rear axle, the rubber mounts that connect upper and lower control arms to the rear subframe have been replaced with solid ball joints, plus the subframe itself is now rigid bolted to the main chassis. Now, one of the stand-out elements of the regular M3 is the precision of its rear axle. What the hell is it going to be like now?

It’s these alterations that will set the tone for the CSL, give it even greater focus and help shed the weight and float it suffers from when pushed hard. But it’ll likely be more of an event at lower speeds. The titanium exhaust back box (4.3kg saved) promises crisper noise, eliminating 15kg of sound proofing will add volume and clarity, while lighter corners (21kg saved thanks to new wheels, tyres, struts and – most notably – carbon ceramic brakes) mean the car should steer more cleanly and ride more calmly.

The engine itself is pretty much as was. The straight-six’s monoscroll turbos (one does cylinders 1-3, the other 4-6) now blow at 2.1bar rather than 1.7 and the engine management has been tweaked (which alone could make a colossal difference to throttle behaviour). The engine bay is caged by an intricate new aluminium brace. Not carbon like the F80. Wrong properties, apparently. And yes, the gearbox is still the automatic, not a twin clutch. Tweaked so the shifts are faster and harder, but still. At least it only drives the rear wheels. For the regular M3/M4 xDrive is the way to go, but not here.

Let’s rip through the other main weight savings, to give you the broad sweep of modifications. It’s chiefly cabin stuff. The fixed backrest, height-adjustment-via-spanner seats save 24kg over base (but only 14kg over the carbon splay-leg seats). Ditching the back seats and ripping out the boot trim accounts for another 21kg. The carbon bonnet saves 1.2kg over aluminium, the curvy carbon bootlid (a direct link to the E46), 6.7kg. After that it’s small fry stuff (floor mats, kidney grille, elimination of automatic air conditioning – although you can’t do away with the AC altogether), my favourite of which is the stunning new filament rear light clusters: 400 grammes lighter. 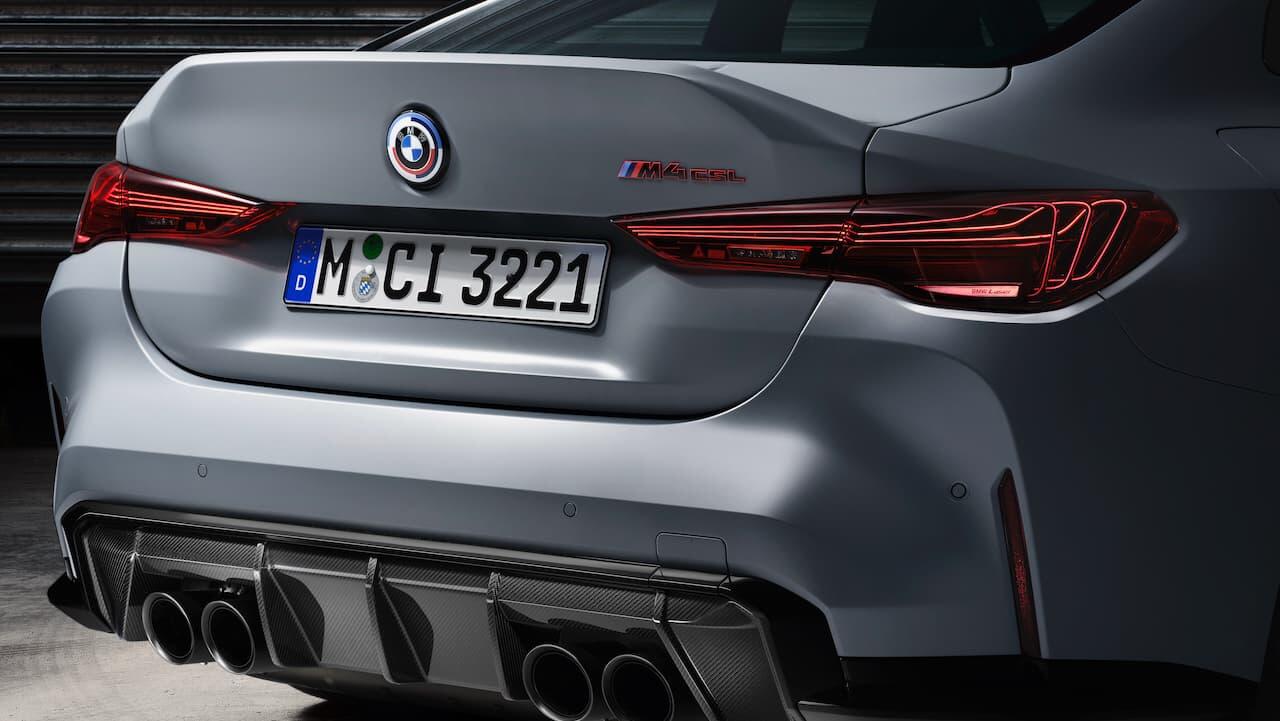 The end result is a power-to-weight ratio that’s improved from 292bhp/tonne to 333. It’s only a fraction better than a standard Alfa Romeo Giulia QV at 330bhp/tonne. The 0-62mph time has dropped by a mere 0.2secs – half of that probably accounted for by the standard fit Michelin Cup 2R tyres. This modest improvement in speed is weirdly encouraging – it means BMW has differentiated the car in other ways. Dynamic ways, ways that should enhance its appeal. Fingers very much crossed.

Quick historical recap. The CSL badge first appeared on the E9 3.0 CSL back in 1972. BMW wanted to race in the European Touring Car Championship, so the CSL was the homologation car created to aid that plan. Even at a distance of 50 years you’ll recognise the weight saving strategy: aluminium doors, bonnet and boot, Perspex windows instead of electric ones, so too various bits of trim and sound-proofing were ditched. It worked - 1,265 were made and the CSL won the drivers' championship six times during the 70s.

Hard to say why the badge then lay dormant until 2003. With the E30 M3 BMW favoured the EVO tag, then GT for the E36. CSL returned with the E46 M3. Seminal is a word often bandied about around that car, the first to have a carbon roof (saving 7kg of the 110kg total), plus a carbon airbox for an intake snarl like nothing else.

That said, it goes without saying that the M4 CSL is also the fastest track car BMW has ever built, having turned in a 7m 15.677sec Nürburgring lap time. Worth pointing out that’s 20secs slower than the aforementioned Porsche. It’s getting to the stage it would make more sense to apply the CSL philosophy to the M2.

White, black and grey are the monochrome colour choices, UK pricing starts at £125,900 – pretty much bang on the same money as the hen’s teeth GT3 and probably just as over-subscribed. Only 100 are coming here, of the 1,000 available globally. Back when the E46 CSL landed we got 422 of the 1,383 total – 36 per cent instead of 10. The global market has clearly shifted. Although as long as it doesn’t shift too far towards the XM, we’ll be happy.