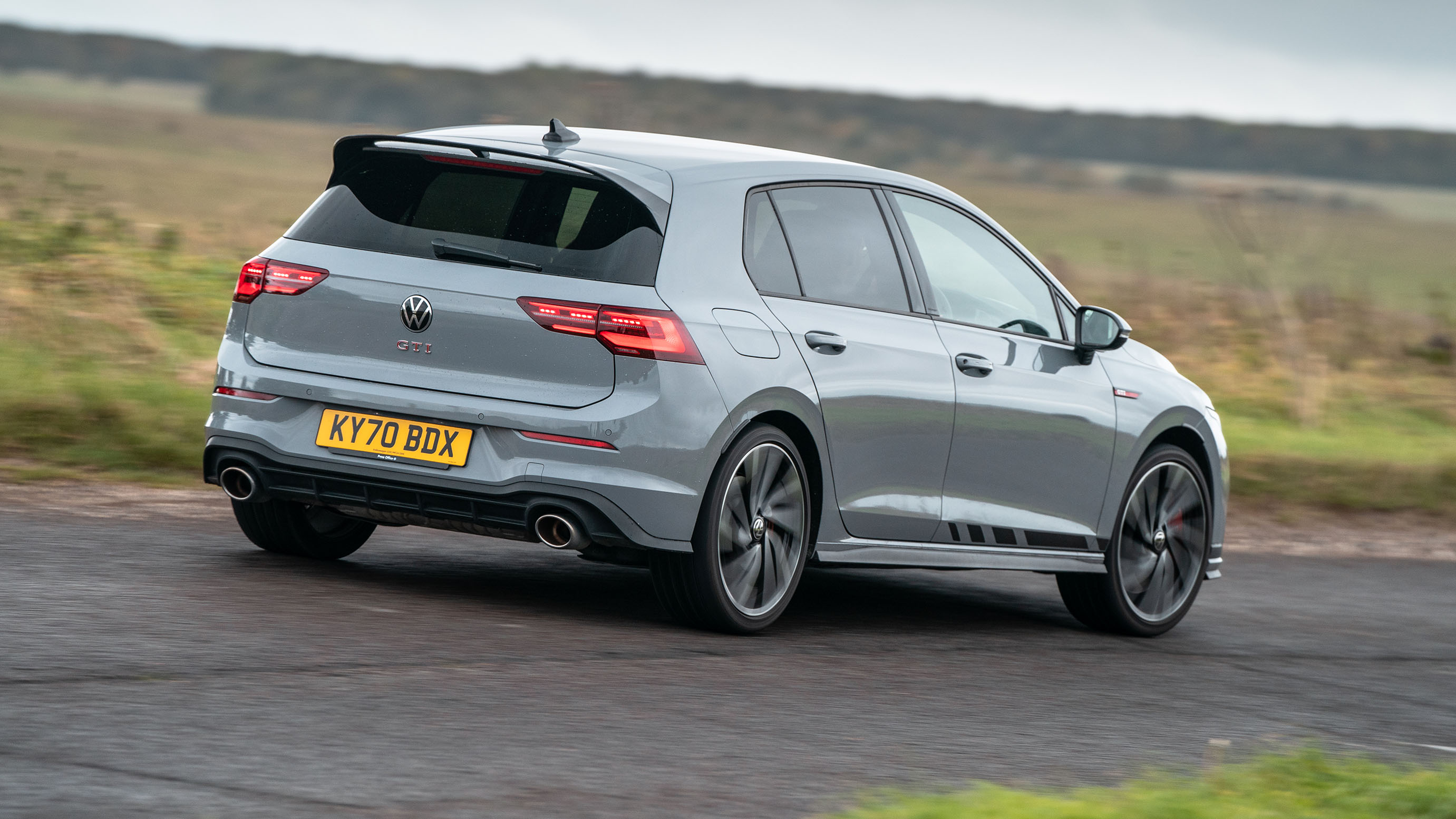 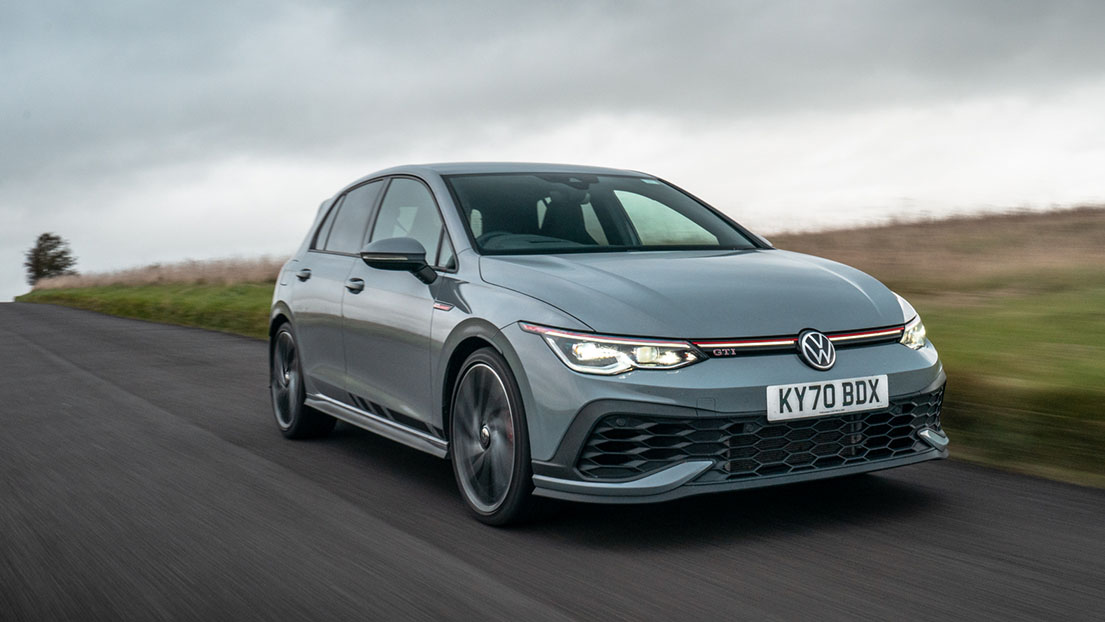 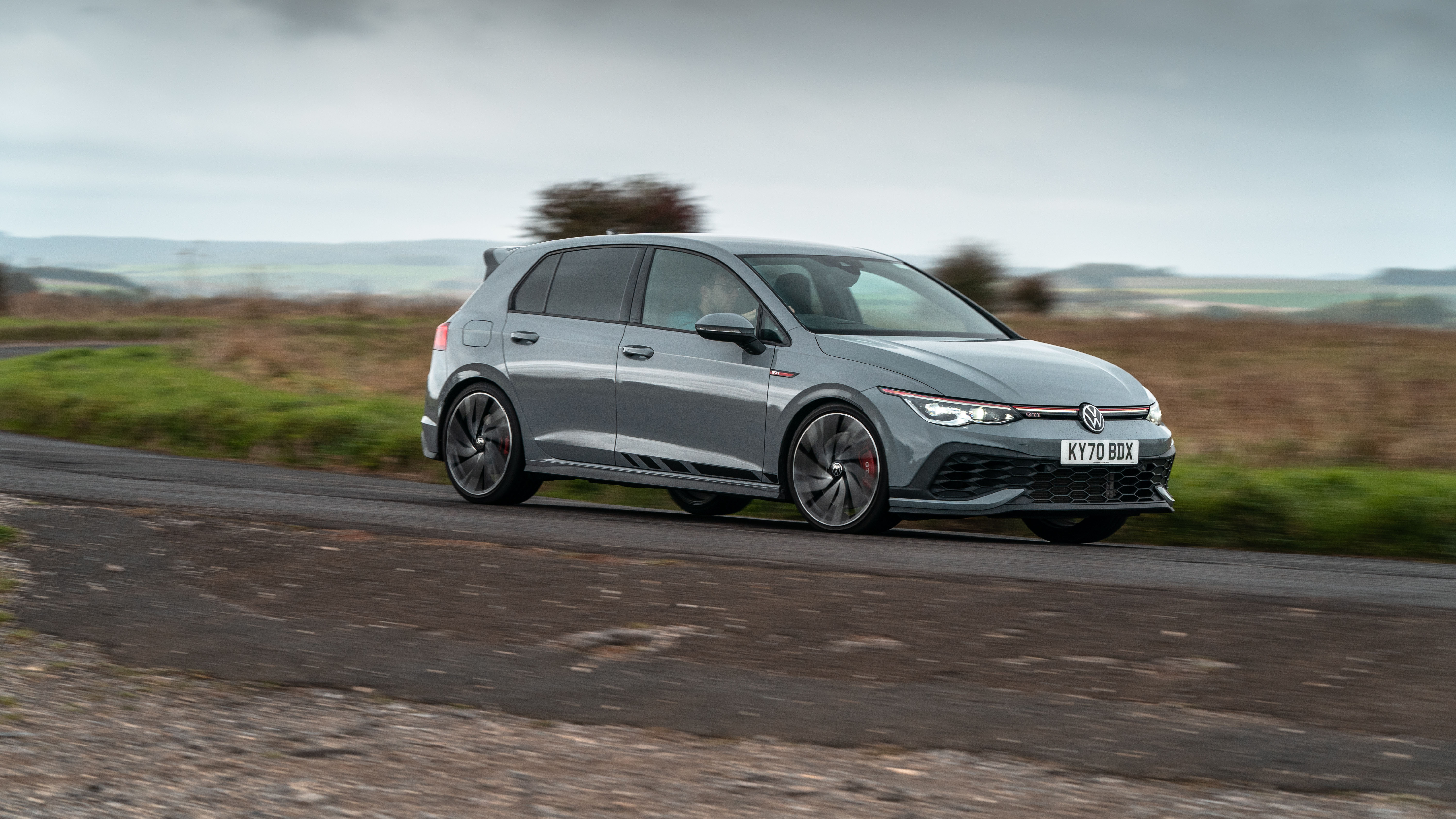 I haven’t just lived with the GTI Clubsport. I’ve lived IN it. This car arrived for a short three-month stint in the Top Gear Garage, sporting 6632 miles on its digital dashboard. I thought I might add 1,000 to that. Maybe 1,500.

But what with the global semiconductor shortage delaying the arrival of other cars we’d have been testing, and the world re-opening over summer 2021, the Clubsport has barely stopped. A genial man from Volkswagen has just collected it. He paused during his paperwork to note it’s covered 9,957 miles. Yes, I am a bit peeved I didn’t crack five figures.

In a long-term test, I think it’s only right we rattle off the basics first, then we dive into the semantics of whether or not this will be a car I’ll remember fondly.

So, VW-2021 build quality. Good, but not perfect. There was a persistent dashboard buzz at motorway speeds that I learned to drown out with stereo volume, but it was something buried under the scuttle, not a loose piece of door trim that needed elbowing into place.

As I braced my hand on the top of the freestanding touchscreen to help jab at the menus, the plastic shroud around the bezel gradually started to work loose. I’ve had a poke around online and found other Golf owners complaining of the same niggle.

VW will obviously argue the monitor shouldn’t be held there. I’d retort that if the screen was more responsive and intuitive, it wouldn’t need to be…

But the old-fashioned stuff: oil use, tyre wear, fuel consumption, were all beyond reproach. Though the Clubsport works its Goodyear rubber harder than the wooden Hankooks fitted to the boggo GTI, it hadn’t turned them to slicks over the summer.

Motorway economy was regularly over 40mpg, thanks to a seventh gear the manual GTIs do without. So, the Clubsport routinely did 3-4mpg more than the less powerful standard GTI we’ve run previously, and easily topped 400 miles to a tank, with a best of 415 before I bailed out of fuel roulette. 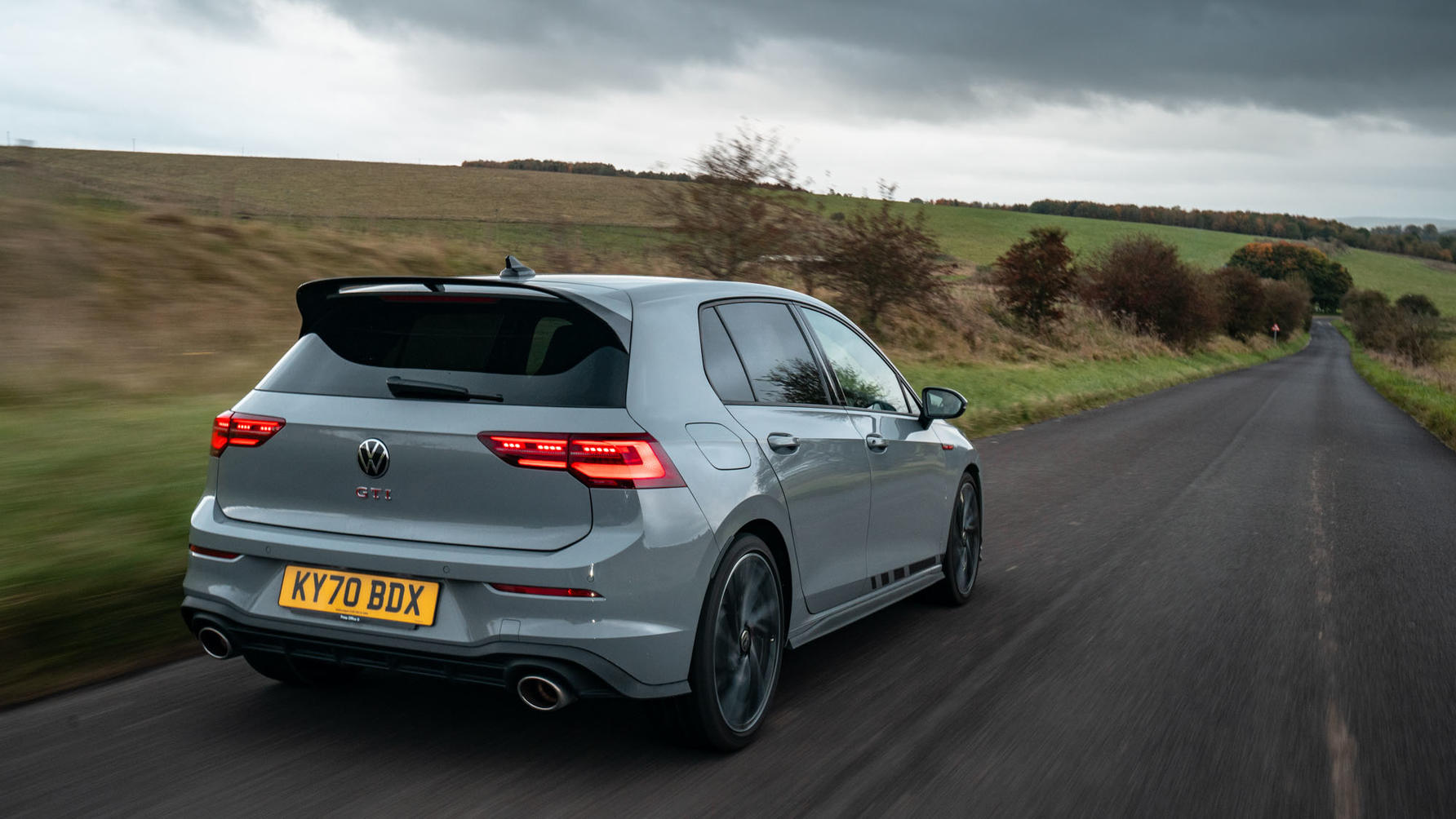 Whoopsies? Well this well-specced Clubsport weirdly didn’t have electric folding mirrors, and I often forgot to manually turn them inwards when I left it parked. And at some point, it’s had a tonk on the passenger-side mirror which knocked the plastic mirror cap loose.

No, of course the guilty party didn’t leave a note. Luckily the heated, electrically adjustable mirror lens wasn’t compromised. I resorted to securing the shell with some insulation tape.

As Stevie alluded to in the previous report when he borrowed the Clubsport, this spec feels more complete than the standard GTI, which doesn’t raise its game highly enough when you want a quick hoon.

The Clubsport is notably more tenacious and deeply, deeply fast. The other week I had a quick go in a Ford Focus ST – a 276bhp car – and was stunned how much slower it felt than the 296bhp Golf. Don’t presume, if you like fast Golfs, the R is much more rapid than this thing beyond launch control getaways. It ain’t.

But… I still have bugbears. Chiefly, this car doesn’t deserve the hallowed name ‘Clubsport’. For example, if I’m going to be forced to have a DSG gearbox, then VW needs to code a mode where the driver is allowed to control it themselves.

The auto upshifts, the auto kickdown, the paddle override – all of this relegates the driver’s importance. It makes you feel like the GTI only wants you to drive it on its terms. And a hot hatchback should be ever-ready to entertain, not feeding back to a German boardroom committee before letting you hold onto third gear.

Would a GTI be my choice in this class of car? I’m afraid that it no longer is. I’m now a Hyundai i30N man, precisely because the likes of Hyundai and Ford have now learned to make a car that’s pretty much as good at doing the mundane as a Golf, but shines brighter when you fancy mucking about. That’s no longer a VW USP.

Mostly, this Golf GTI is badly hurt by this generation’s pared-back-for-no-logical-reason interior.

Now it’s legal to be sociable again, I used this car to give lifts to mates. Whether they were car people or not, the same responses always cropped up.

“Is this a basic one then? Where are all the buttons? What, so I have to use the screen? Oh, I wouldn’t like that? In MY car, I have a button. Hmm – are they trying to be Tesla?”

I’ve got a couple of friends who actually own Golf Mk7s. One’s a GTI. One’s an R. I canvassed them both to see if they’d swap. Both preferred their older car’s interior, and noted the new Mk8 isn’t ultimately, that much better to drive. I have to say, after 3,000 miles, I agree with them.

If only VW had incrementally upgraded the cabin, but re-invented the dynamics. Then we’d have another world-beater on our hands. 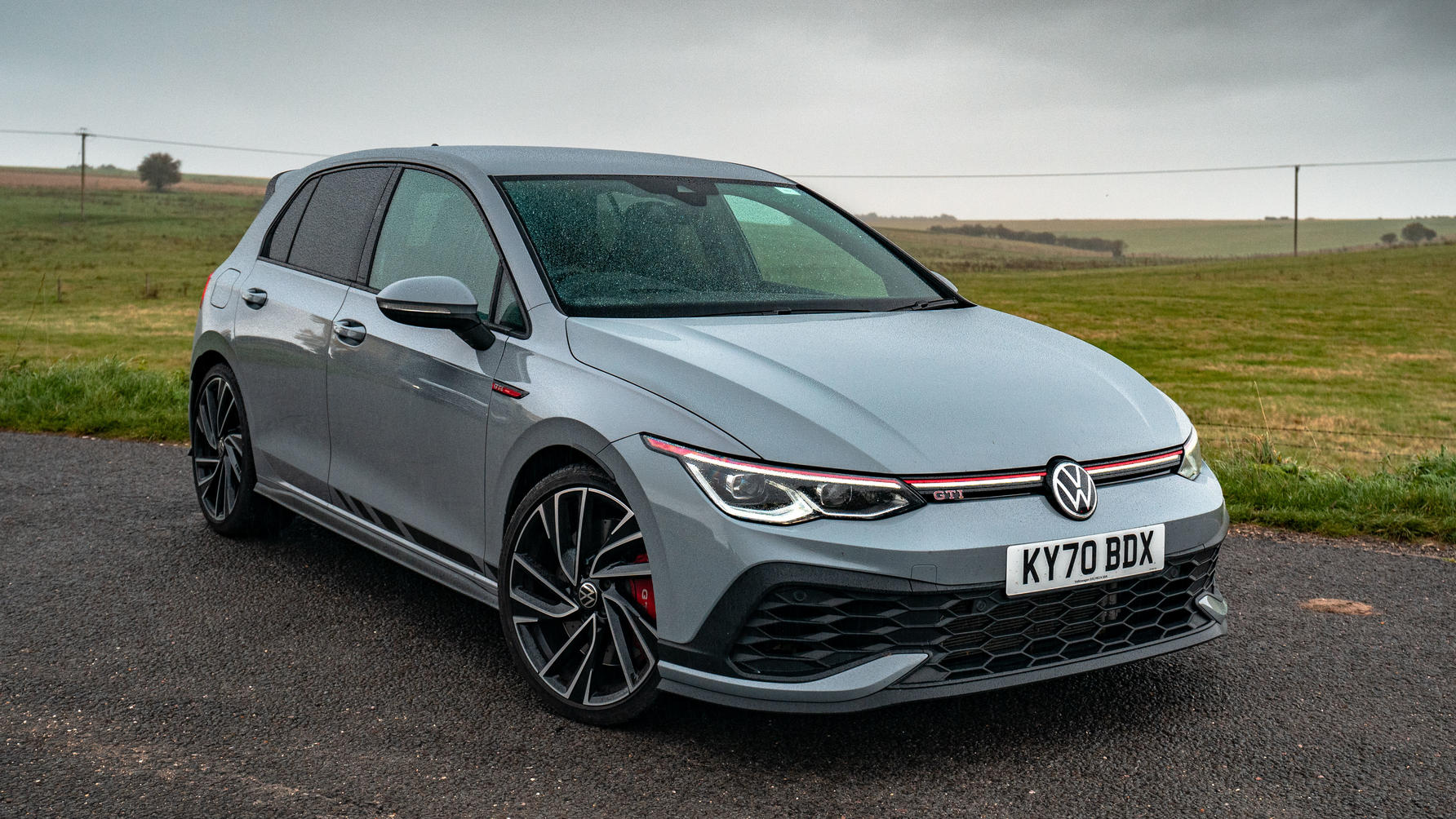 But, the Top Gear Garage isn’t quite done with the Mk8 Golf. We’ve got one more stopping by for a while…