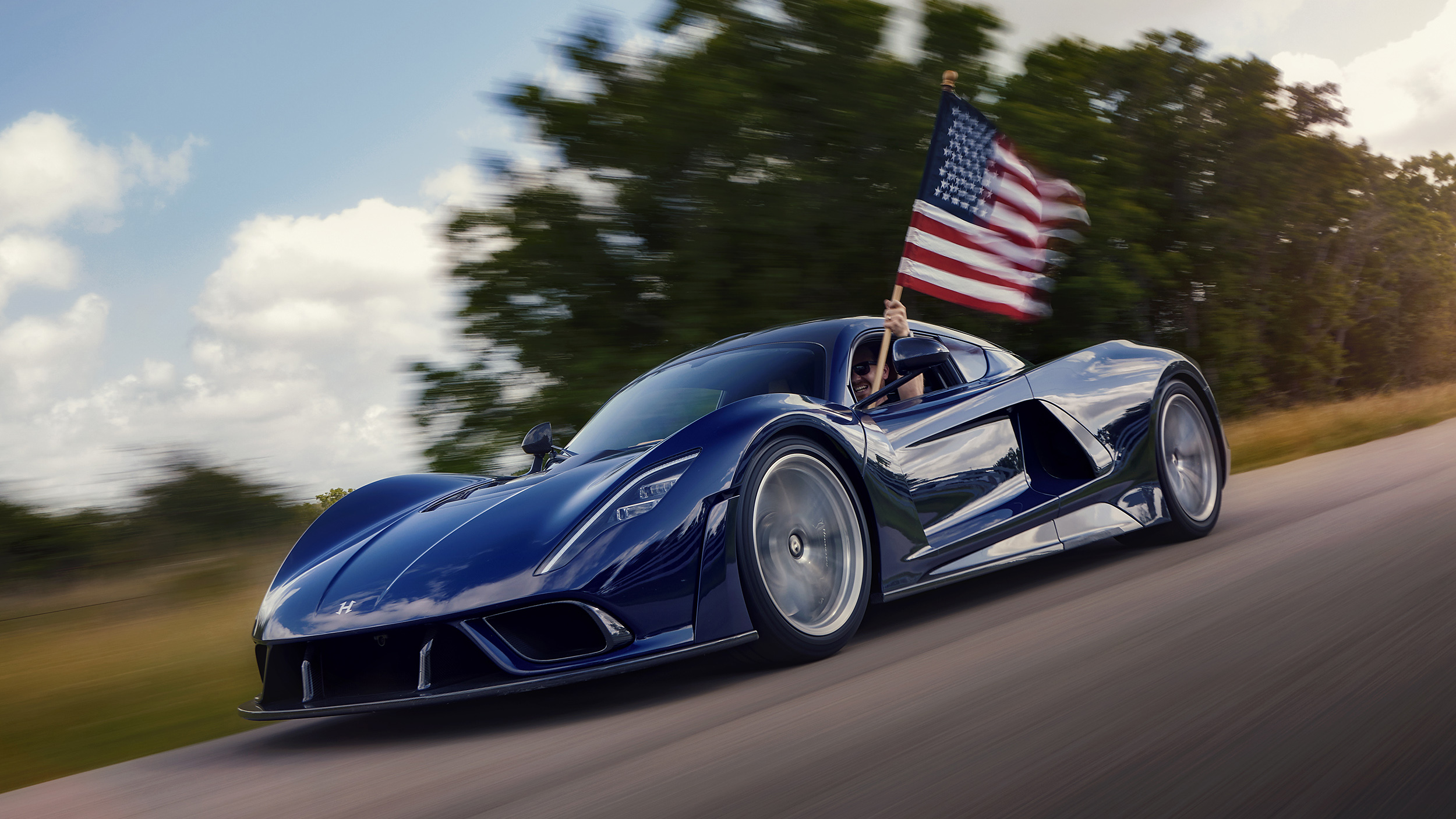 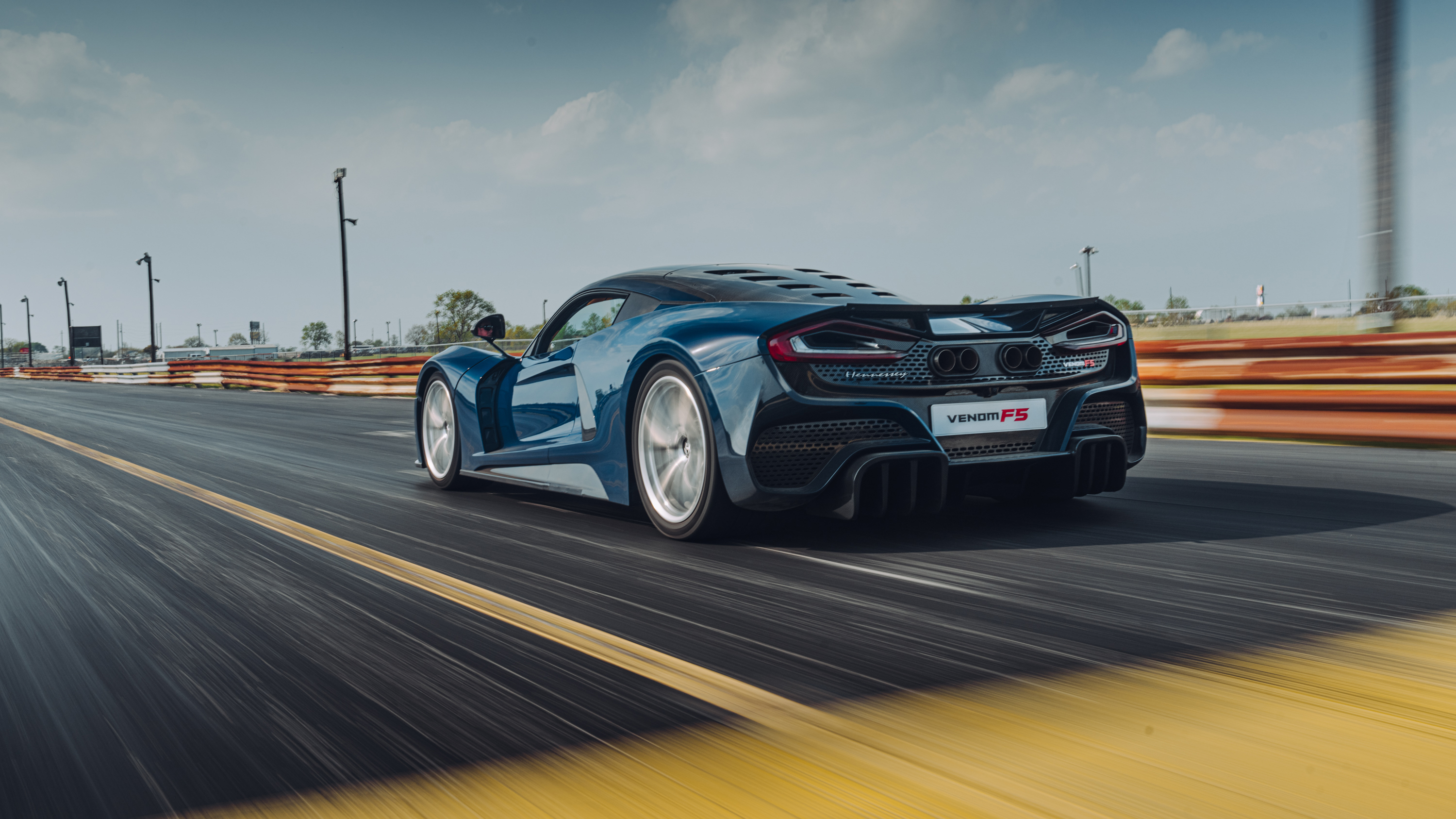 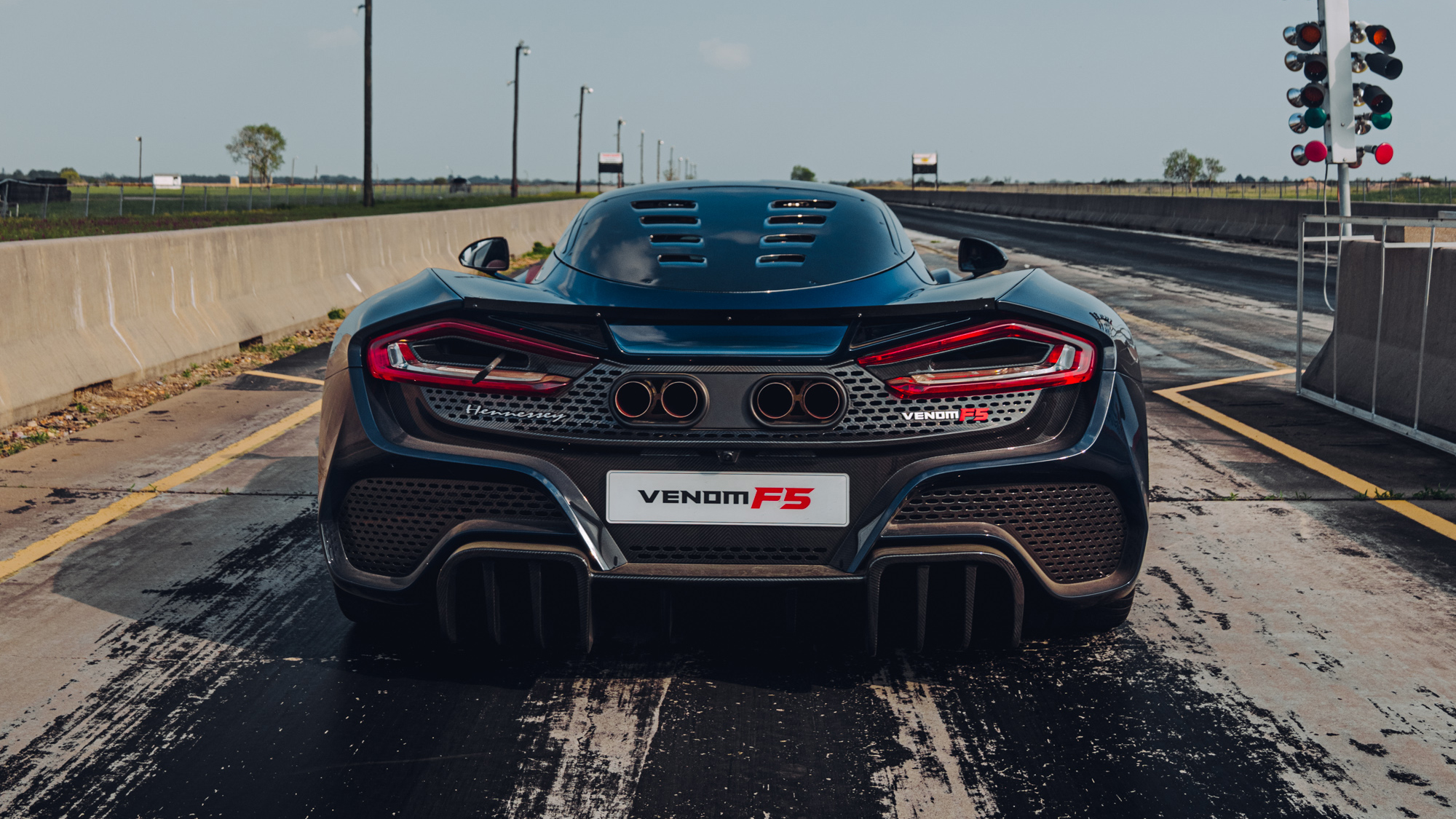 Far from it, this is the Hennessey F5 Venom, quite possibly the world’s maddest hypercar and one eminently capable of over 300mph. The F5 is John Hennessey’s baby – a love letter to excess horsepower, which the Texan tuner has spent 30 years bringing to the masses in various trucks and muscle cars. But this is something different, something entirely bespoke, the most extreme combustion-engined supercar he, or anyone else for that matter, could possibly imagine.

We’re first outside of the company to have a go - on John Hennesey’s drag strip and the roads surrounding Hennessey Performance HQ in Sealy, Texas - and while there’s still some light finessing to do on this particular chassis, it’s 90 per cent finished… and furnished with the full performance. Gulp. All 24 coupes are sold out by the way, at £1.9m each, although there are 30 targa-topped roadster versions and a handful of hardcore, high-downforce track warriors up for grabs a bit later, too.

Damn straight. Climbing into the F5 feels like you’re willingly strapping yourself to a rocket… exciting, but tinged with terror. Even at idle the engine burbles away like a T-Rex puffing on a pack of B&H. The engine’s name, genuinely, is FURY. And like Tyson it’s a bit of a puncher: 6.6-litre twin turbo V8, 1,817bhp, and because everything’s made out of carbon – the tub, the skin – it weighs 1,360kg dry. That’s just 30kg more than a Ferrari F8 Tributo, and yet it has 1,000bhp more.

Maximum power is produced at 8,000rpm, there’s an 8,500rpm redline and 1,192lb ft of torque arrives at 5,000rpm… hello wheelspin. The engine is based on GM’s LS pushrod V8, but completely rebuilt with drag racing spec internals and dustbin lid turbos. The gearbox is a seven-speed single clutch semi-auto and the performance claims are bonkers - 0-62mph in 2.6secs, 0-124mph in 4.7secs and 0-250mph in 15.5secs, which is almost twice as fast as a much heavier Bugatti Chiron.

Fast then, but it’s vmax that Hennessey cares about isn’t it?

Sort of. The name comes from the Fujita Tornado Scale – F5 being the gnarliest with wind speeds up to 318mph, which is apt because in theory, on a long-enough road, this will do more than that - 340mph based purely on the gearing - although the true top speed will be a chunk below that. So far it’s done about 270mph on the shortish Nasa shuttle landing strip at the Kennedy Space centre in Florida (incidentally the same record-breaking speed that the Venom GT hit back in 2014) but there’s plenty more to come from the F5. Keep your eyes peeled for a 300mph+ bid in the not-too-distant future.

On the other hand, John Hennessey has gone on record saying this: “We didn’t want a one-hit top-speed wonder, we wanted a car with a proper amount of balance and downforce at 300mph, but one that could still be driven on a B-road in the UK.” We’ll see about that in a bit.

Any other tech and design highlights?

Many. And what’s obvious when you’re standing next to it is how simple and stripped back it is. You get Brembo carbon-ceramic brakes, fixed-rate dampers to save weight, off the shelf Michelin Pilot Sport Cup 2s (no mega-money bespoke rubber here), forged aluminium wheels and this relatively slippery body. Which makes total sense, because for a high-speed car you don’t want big downforce, you just don’t want lift. As we mentioned earlier, removable roof and big-wing F5s are coming, but this is the version you want. John’s vision in its purest form.

Speaking of which, care to describe a full-bore launch?

Firstly, you need to pick your mode via the Manettino-style toggle on the yoke-style steering wheel, but there’s only two you’ll care about. Sport limits boost, capping power to around 1,200bhp – enough for the school run, sure, but for the hit of the whole 1,817bhp fruit you need F5 mode.

Sat there idling on the start line of Hennessey’s in-house drag strip, the engine rocking the car side to side, debating whether F5 is entirely wise for my first ever drive in this lightly disguised dragster. In for a penny, in for a pound. We gun it in first and the squeal of rear tyres clawing for purchase is matched only by the unholy rolling thunder from the exhausts. Second gear, we hook up, hit 5,000rpm and just take off. Upshift into third just below 8,000rpm and BOOM, more of the same.

We watch the speedo tick up towards 150mph and set that as my arbitrary target. Then I’m on the brakes, on the brakes a bit harder… oh dear the end of the runway is approaching at speed. I’m standing on the pedal now, ABS getting a full workout and steering the car down the escape road to the left. Judged to perfection, in case anyone asks.

My word, the way it gathers speed is relentless. The shove from 70mph to 120mph is comparable only to something like a Pininfarina Battista or Rimac Nevera, but the noise, the smell, the vibrations – it’s all so much more intoxicating here. And it’s that sensory input that’s telling you when to tense your neck and your core, so I’m sitting there, hands shaking, sweating profusely despite the air-con being on full-blast. Can we do it again please?

Similarly unhinged. Unfortunately, we didn’t have a UK B-road to hand, but they do have roads in Texas too. It just feels insane that a car this extreme, this potent, can be legally driven on the road. If you were trying to sleep within a 15 miles radius of where we were driving it on 10 May… sorry.

In terms of aggression, it makes a McLaren 720S look like a Cosy Coupe. Sound deadening is minimal so you hear every stone pinging off the wheel arch, every hiss and burp from the engine, every clunk from the gearbox. But it is driveable, and genuinely good fun, because the fundamentals are all there – it’s low and light and the engine’s behind you so the front end tucks in beautifully and, so long as you don’t use the throttle like an on/off switch, you can peel the power in early and carry big speeds. I’d say some lap records are probably in danger once Hennessey dials up the downforce and goes full track attack.

Chinks in the armour?

The seven-speed automated manual gearbox. There’s still quite a bit of finessing to be done, especially at low speeds, so things will get a lot better but even then it’ll never be perfect. Same nodding dog effect on medium-speed upshifts you get in a Lamborghini Aventador, which you can mitigate to a point with a well-timed lift, but at lower speeds is currently quite clunky. Full-throttle upshifts on the other hand are brutal, a smack of cogs and you’re off again, the perfect accompaniment to the car’s uncompromising character.

Assume the suspension is back-breaking?

It’s definitely more 765LT than 720S, but not actually. Because it uses fixed-rate dampers there’s some give dialled in, a bit of roll before it really digs in. You can certainly find a flow down a backroad. Seats are good too – skeletal to look at but grippy enough and decently padded.

The interior as a whole is a bit of a surprise, actually, and I’m not just talking about that yoke steering wheel which brings fighter jet vibes and is fine for straight-line stuff, but a total faff when you need to dial in more than half a turn of lock. There’s not much to the cabin other than a central screen for mirroring your phone, a digital instrument dial with your vital statistics and lots of carbon and leather. But what there is is nicely put together. There’s awareness here from Hennessey that this is a £1.9m package customers are buying into, not just a monstrous engine with some free car bits attached.

Is anything? Hypercar prices are in the stratosphere at the moment and the 24 F5 Venom coupes have all found homes. Money is just a number though, what matters is John Hennessey has pulled off the impossible and turned a moon-shot project, that had all the hallmarks of never being completed, into a cohesive car that’s brutally fast in a straight line… but also fun to drive.

I’m sure someone, perhaps even John himself, is going to shut down a highway and clock 300mph+ in this thing. It’s easily capable of it, but honestly, that’s a stunt. Far more important is that the F5 has character, it’s an event, it’s a blood-curdling, eye-rattling earthquake of a car that sums up America and its love affair with the V8 and horsepower so well. Electric cars are taking over everything, even John’s cooking up a six-wheel, 2,000bhp EV hyper GT, but this is the stuff that we’ll look back on in a few short years and long for.

The F5 story isn’t over yet. We need to get this thing on a track, we need to hit some really big speeds in it, but based on this first contact, it’s an astonishing achievement from such a small company. It’s also a towering monument to combustion that will be worshipped long after the last drop of petrol has dried up.