£566 p/m
External link to
with Leasing.com
Read why you can trust our independent reviews
Top Gear Team
Published: 08 Sep 2022
Skip 11 photos in the image carousel and continue reading 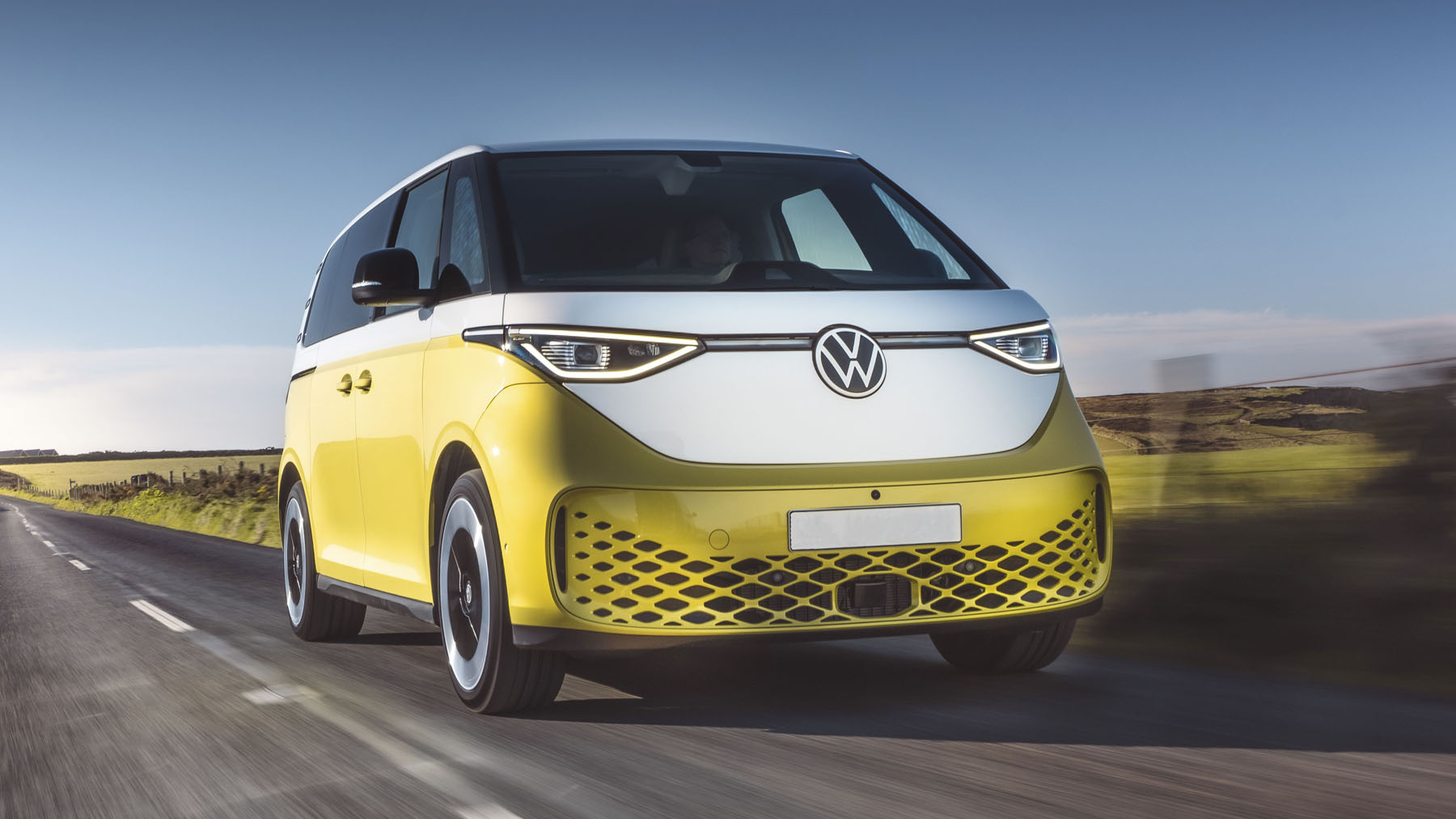 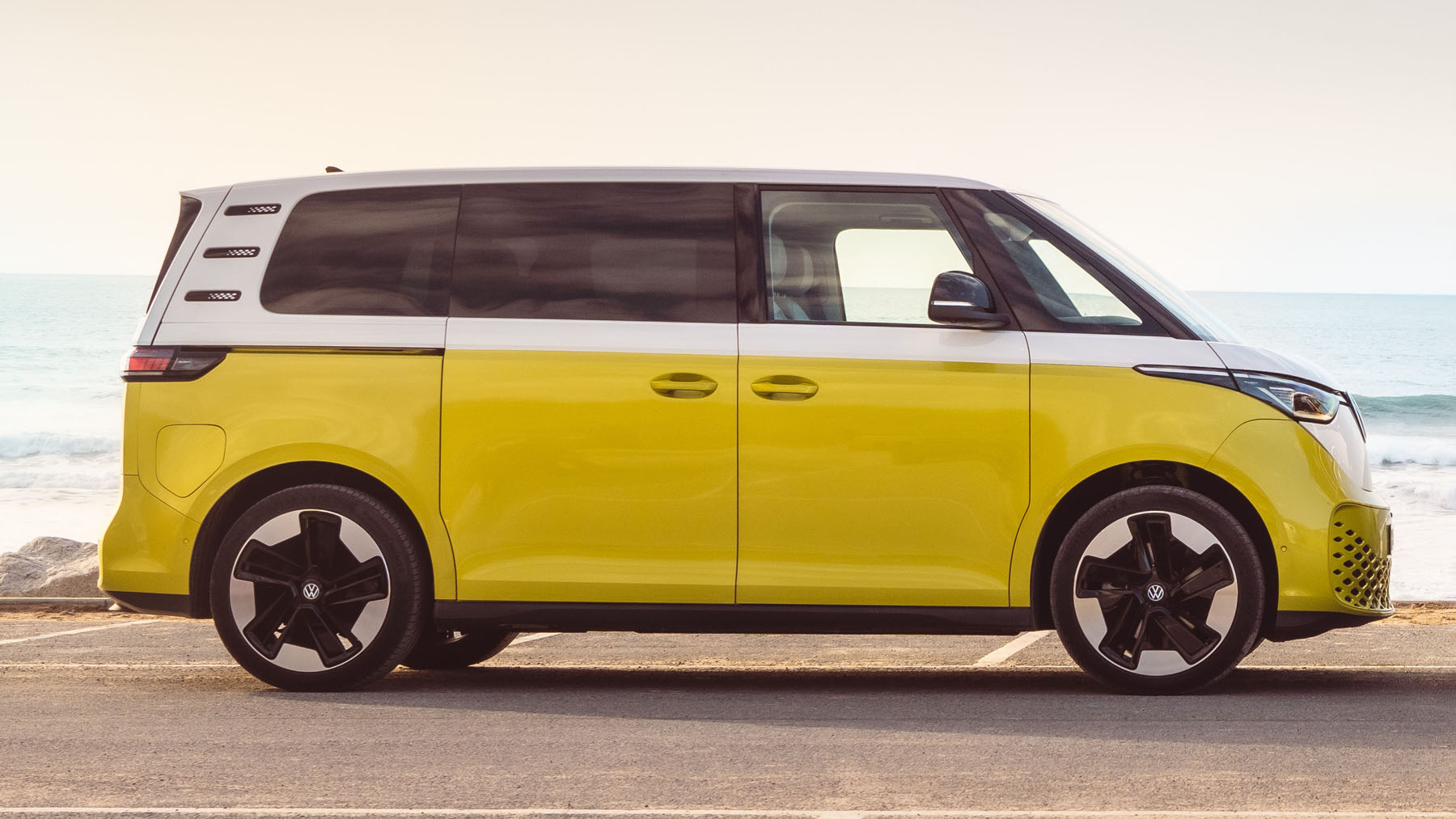 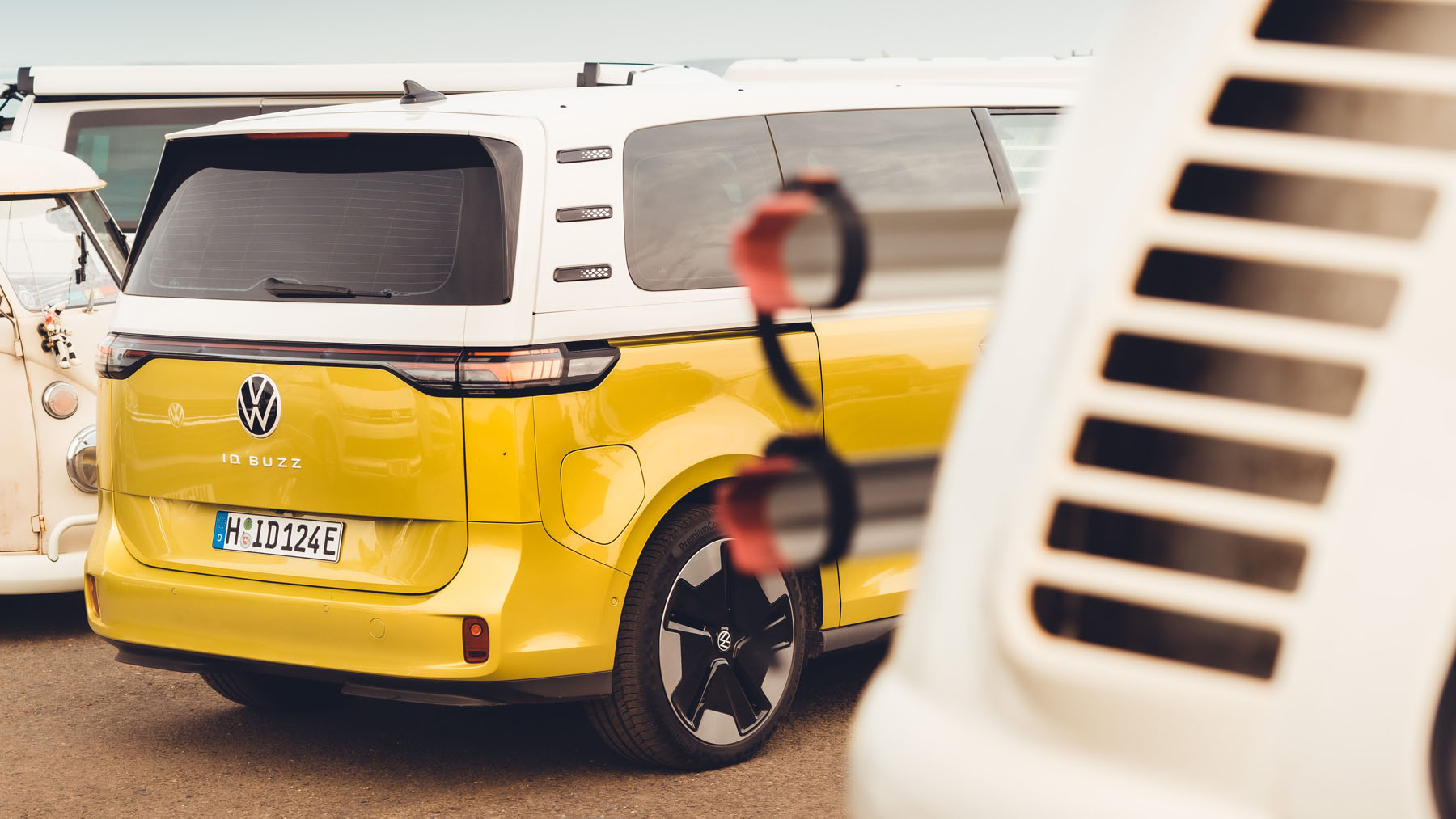 1 / 11
Advertisement
“An uplifting electric van that's fun to be in and around. Could it break the SUV mould? ”

Underneath the glitter it’s a regular five-seat MPV, suspect infotainment

It’s the retro recreation we’ve all been waiting for, VW’s take on a latter day Type 2, a nod to a funkier electric future and a family wagon you might actually want to drive. It’s the ID. Buzz.

Not just yet. Or rather not at all in the case of that last one. It’s on sale in the UK now, with first deliveries expected early in 2023. Two versions will be available from launch, a five-seat ID. Buzz and an ID. Buzz Cargo with up to three seats across the front and a cavern behind. Other versions will follow, but not before 2024. Then we’ll get a long wheelbase version with more seating capacity and versatility, probably a bigger battery and a twin motor/4WD set-up. And, we’re assuming, a California camper variant.

So none of the cool stuff yet, just a five seat MPV?

That’s about the size of it. But compared to any other family car out there, this is going to look and feel very different. It stands a chance of making the MPV desirable, for a start. But that is what this is: an MPV.

The basics are as follows. It uses the same MEB platform as the ID. 3, ID. 4 and ID. 5, but that’s scaleable, so here it’s been lengthened, gaining a 2,988mm wheelbase that’s as long as the current Caravelle’s. There are sliding doors both sides. The powertrain is carried over as well: a 77kWh battery feeding a 204bhp/228lb ft motor that drives the rear axle. Claimed range stands at 258 miles – think more like 150 if you’re loaded and checking out the 90mph top speed, but in reality probably around 200-230 miles. A 5-80 per cent charge takes 35 minutes (assuming you can find a 170kW charger).

So what’s happened to the Caravelle?

It’s being phased out. The Transporter and California versions will continue, but VW is pointing those wanting a combustion-engined people carrier towards the new T7 Multivan now.

Moving on. Despite that Caravelle-matching wheelbase the overhangs are smaller so the Buzz is about 200mm shorter overall. It’s also 30mm lower but about 60mm wider. But it’s a lot smaller inside – the body frame is thicker, which is great for torsional stiffness and refinement, but cuts into interior space.

However, by SUV standards it’s massive. Where they have boots of around 600 litres, this musters 1,121 litres. Shame the three seats across the back are rather ordinary, even if the 60:40 split bench does slide and fold flat, while VW will offer a mattress to turn it into a pseudo-camper. But no seven-seat option. At least not yet. Click the Interior tab for more on practicality.

Stunning. Simple as that. It may feel rather plain and ordinary in the back and boot, but up front is where VW has invested. The view forward is compelling. The upright windscreen is a long way away, bracketed by tall quarterlights so you feel surrounded by glass. Meanwhile the dash design and door trims are bright and uplifting.

The driving position is more relaxed than a Caravelle, the steering comes out to you a bit more, you sit lower in relation to the pedals. There’s still armrests on both sides. The only fly in the ointment is interacting with VW's notoriously patchy infotainment. By the time UK deliveries start, a software upgrade should’ve been implemented.

It’s not demanding to drive, but it shouldn’t be – the ease of EV is the appeal. So this is light and easy to pilot, and combined with the driving environment delivers a sense of wellbeing that no SUV this side of a Range Rover can match. The ride is a little lumpen on the biggest wheels, the steering a little numb on the smallest, but by van or even MPV standards the Buzz is a sophisticated thing. It feels strong, robust, smooth and carries itself well. 0-62mph takes 10.2 seconds.

Around town it’s wieldy and since only the rear wheels are driven, the turning circle is impressively tight. There are driving modes. VW needn’t have bothered.

Prices for the five seat passenger car start at £57,115, with the Cargo version from £46,621. That’s the one camper van converters will be focusing in on before VW gets its own eye in. Just bear in mind one of the reasons the Cargo is cheaper is that it uses more basic materials inside. It doesn’t have the same uplifting cabin as the passenger car.

Yes, £57k seems a lot for a van, but look at what people spend on regular VW Transporters. Or more to the point the Land Rover Discovery, BMW X5, Mercedes GLE et al. This is bigger inside, friendlier and far more forward looking than any SUV. A fully loaded First Edition is about £66k.

“A convincing vision of a family car done better. We love it because it’s different”

A convincing vision of a family car done better. We love it because it’s different, because it’s a new anti-SUV template, because it’s fun to be in and around. But equally we’re not blind to its drawbacks. The battery and range are on the small side, and it’s a two-tier cabin. For those up front this is unique and special, while those behind, apart from sliding doors and intensely generous headroom, have less to lift their spirits.

But right now, if you’re looking at any other premium crossover or SUV – be it electric or internal combustion – doesn’t this look like a brighter, more engaging and interesting alternative? It’s beguilingly simple and yet entirely uplifting.