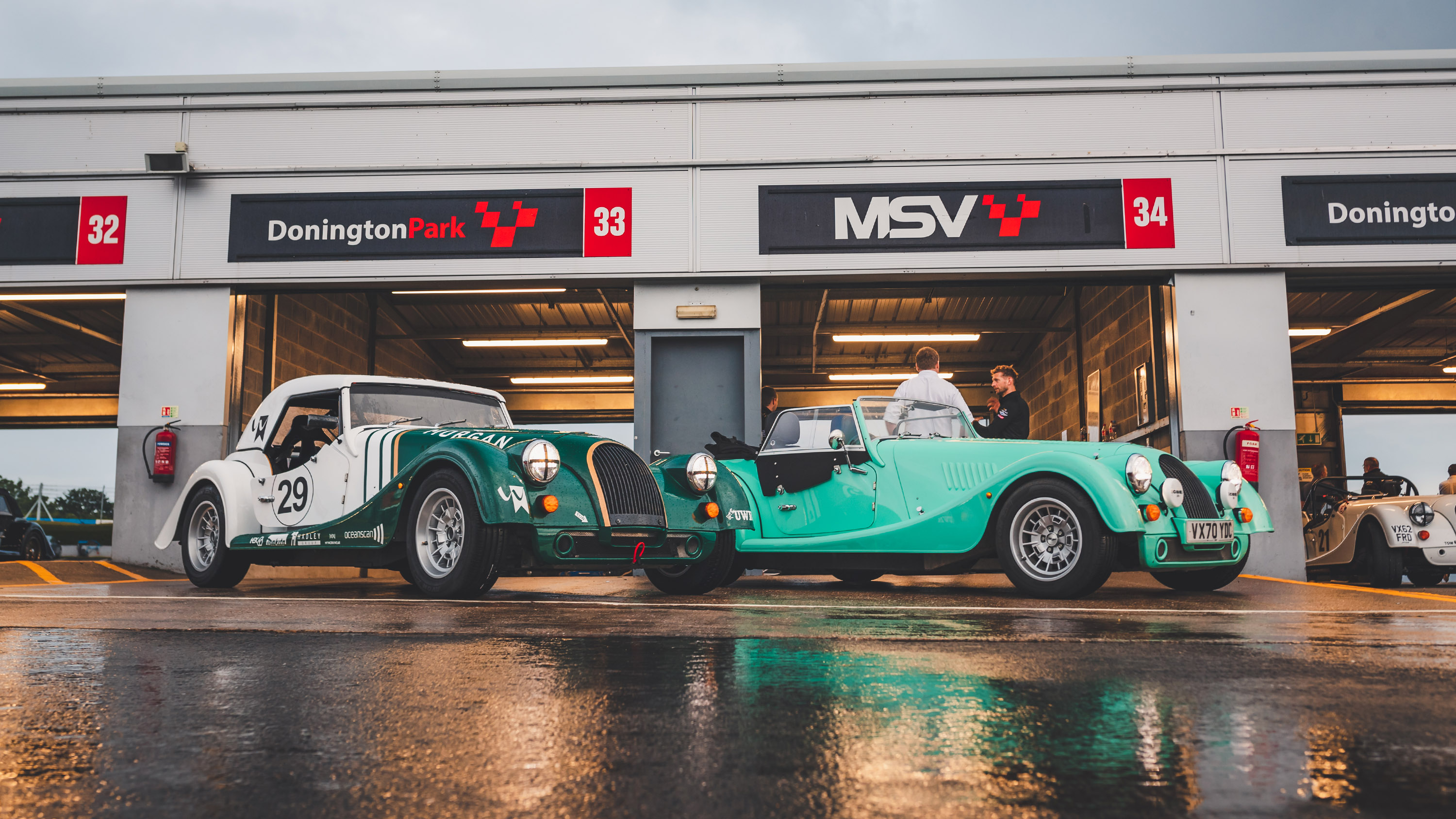 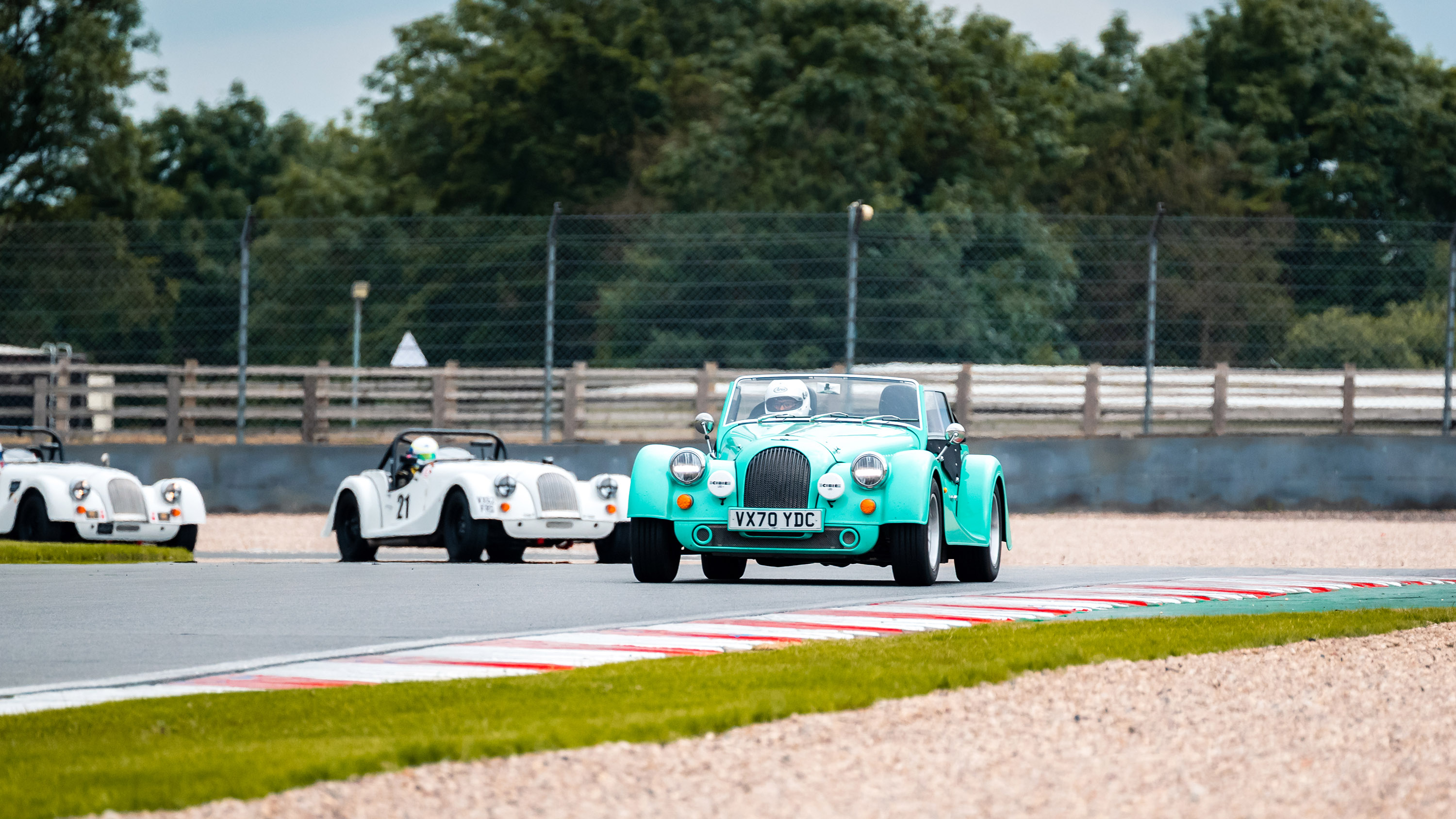 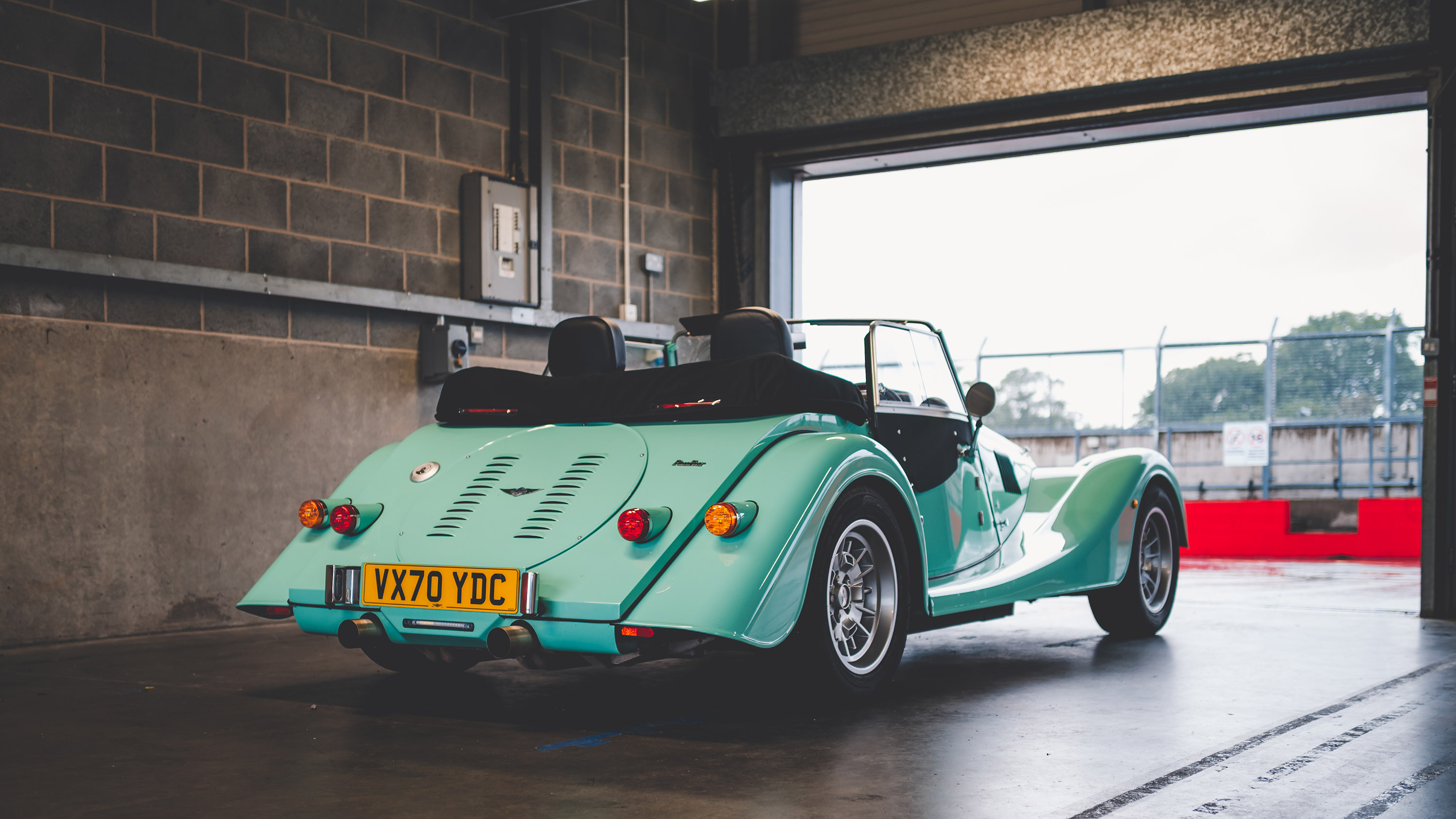 Our Morgan hits the track - and meets its racecar cousin

I’d forgive you if the phrase ‘Morgan owner’s meet’ has you picturing a motley crew of flat-capped ladies and gents convening for a cream tea. And I’m sure that does happen. But this Morgan owner’s meet was something altogether different: a track evening at Donington Park.

It was the first of Morgan’s new ‘Sunset Sessions’, and it saw a cavalcade of modified Mogs meet in the paddock just as a bike trackday was winding down. It was hard to work out who was making more noise...

While there was a small bunch of new, CX-platformed Morgans like our Plus Four, a far bigger proportion of the attendees brought track-prepped classics with adorable rollover hoops sprouting from their wood-lined interiors. A solitary 3 Wheeler pulled the evening’s average wheel count a whisker below four.

After nearly 10,000 miles of enjoying our Mint Mog on road, it was huge fun to let it fully breathe on track – and to find the redline of more than its first two gears. All told, I was pleasantly surprised by how the Plus Four copes on track; while this most modern of Morgans won’t be rivaling any Porsches for precision, the light, quick power steering and decent Avon ZV7 rubber means you can commit considerable speed into a corner and trust you won’t be wrestling the car out the other side – despite its peak torque arriving from a trifling 1,000rpm. There were small slides here and there, but it didn’t feel an untamed hot rod like some of the older, V8-engined roadsters I was reeling in come the tighter turns.

The one area I’d undoubtedly improve if I were to drive on circuit often would be the brakes. They are very tangibly not up to repeated big stops, and I quickly adjusted my driving style for smoother, earlier braking. All the better as a relative newbie to Donington’s plunging curves anyway.

Most of my laps in our Plus Four were under foreboding clouds but upon dry tarmac. With comic timing, however, those clouds emptied themselves as soon as I finagled a go in the hard-topped car you see here. It’s a racecar version of our long-termer, effectively, developed between Morgan and University of Wolverhampton students as a clubsport competitor that you can enter into a wealth of events including the Morgan Challenge, which even takes in a round at Spa.

Changes are so few, it can still wear number plates and thus transport you to and from races. The roof is new (but will make it to the stock Four’s option list) while there are semi-slick Avon ZZRs, retuned suspension and an interior that’s stripped of luxuries before the fitment of a roll cage, harnessed buckets and a removable wheel. There’ll be bigger brakes, too, but this one was on regular road pads, placing a limit on my newfound confidence from how much more incisively the racecar turned in on those tyres – even as Donington slowly turned into a lake.

Our Plus Four proved an amiable track toy, so it’s no surprise that a bit of concentrated lightweighting and fine-tuning can morph one into a very accessible racecar (there's a longer review here). Morgan will even sell you one with an automatic gearbox if you want. For now, I want to nick its tyres, seats and wider-angled rear-view mirror, which’d finally give drivers of the Mint Mog a genuine idea of what’s going on behind them…